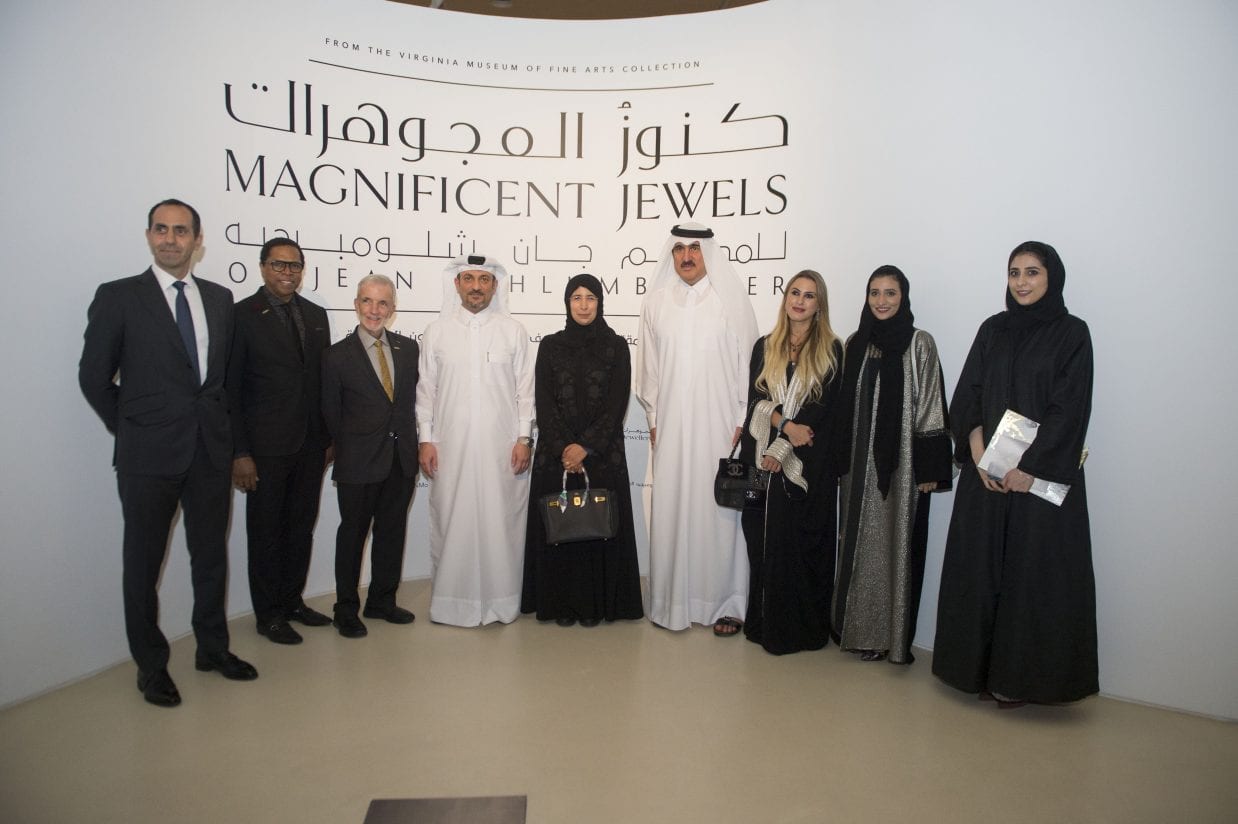 A Patron and a Jeweller

Magnificent Jewels of Jean Schlumberger: From the Virginia Museum of Fine Arts is a collection of 125 pieces of exquisite jewellery by the designer, exhibited at the National Museum of Qatar till January 15, 2020. 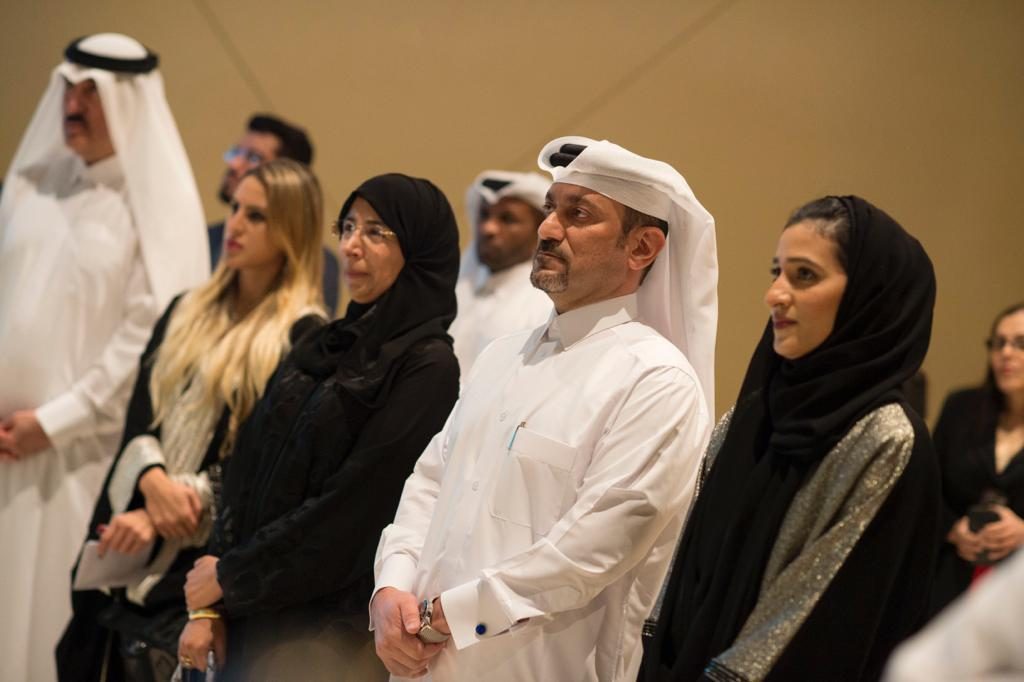 Qatar Museums have brought another fascinating collection to Doha, one that indulges the fashion and high-end-jewellery appreciating audience in Doha. This collection throws light not only on the creativity of the designer behind Tiffany and Co, but it also touches on the special bond between a jewellery designer and a supportive patron, whose collection paved way for this travelling exhibition. The jewellery designer in the spotlight is Jean Schlumberger and the patron, Rachel Lambert Mellon, the heiress and philanthropist best known as Bunny, who was the Jean Schlumberger’s most supportive patron and a close friend.

Schlumberger began his career crafting costume jewellery for the French fashion designer Elsa Schiaparelli in 1930s Paris, before heading his own private salon at New York’s Tiffany & Co. beginning in the 1950s. Schlumberger’s designs for objects ranging from cigarette cases and pillboxes to brooches and necklaces were popular with some of the most celebrated women of the period, among them Rachel “Bunny” Lambert Mellon (1910-2014), a noted American horticulturalists and philanthropist, whose collection is the focus of this exhibition. 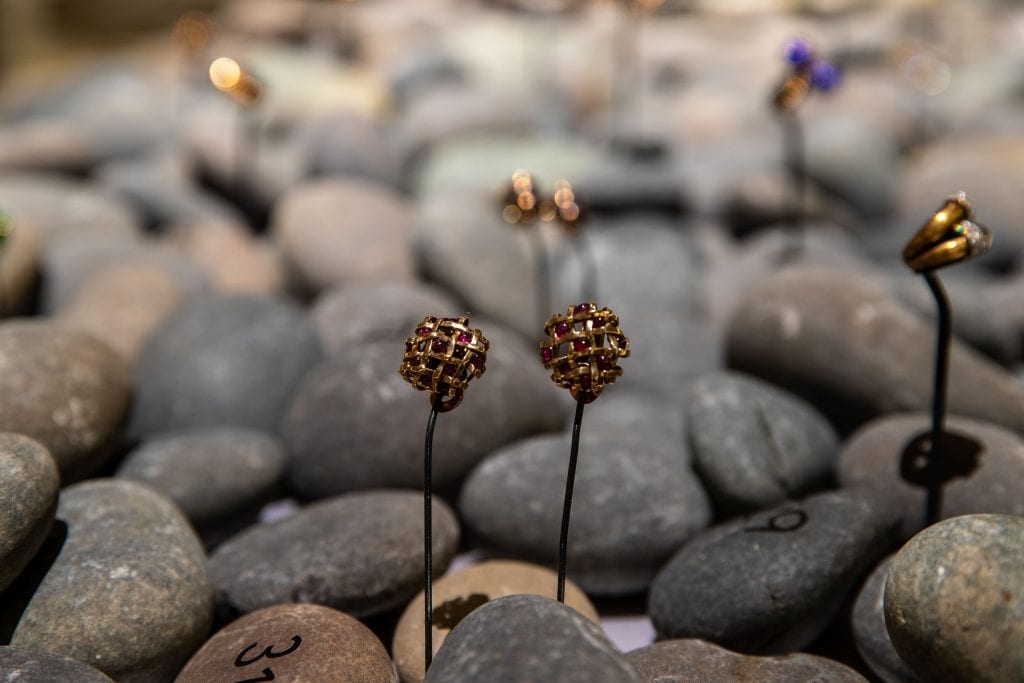 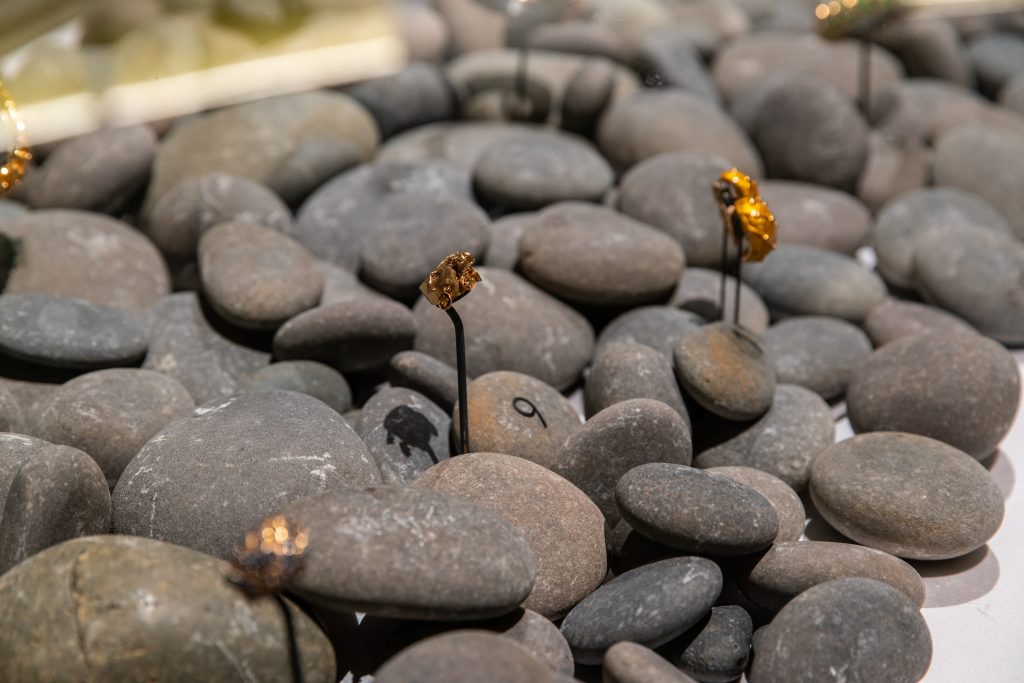 A lifelong trendsetter of style and an avid acquirer of beautiful things, Bunny, who died in 2014 at the age of 103, left her considerable collection of Schlumberger jewels and objects to the Virginia Museum of Fine Arts in Richmond.

Schlumberger was also known for creating the famous pailloné enamel bracelets which were a favourite of the then-first lady who acquired many of these Tiffany bangles and hence these bracelets came to be known as Jackie bracelets. 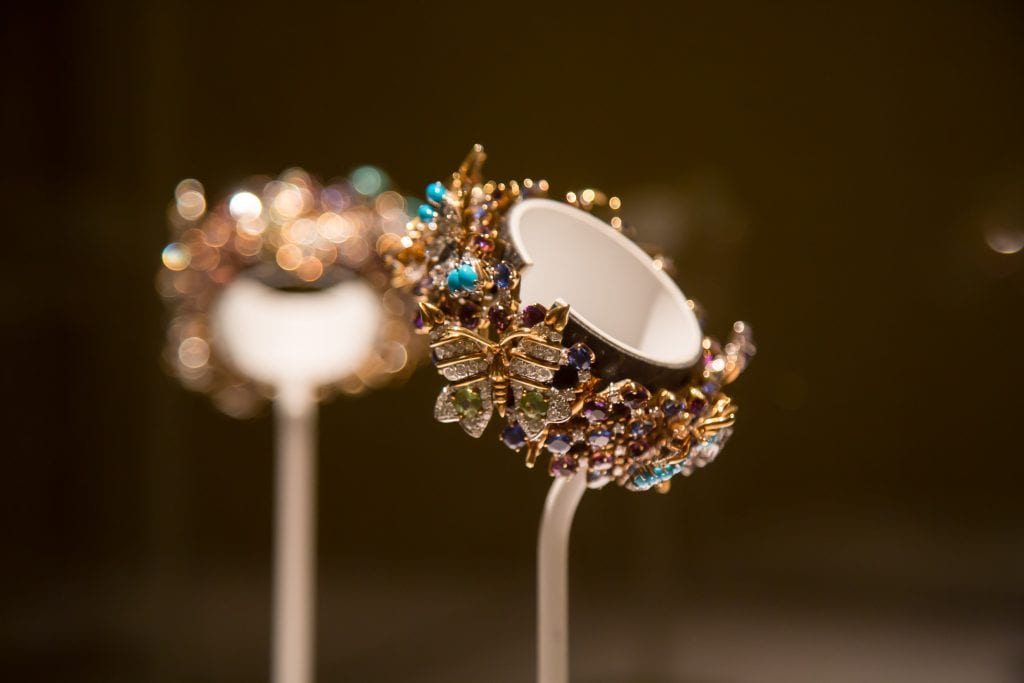 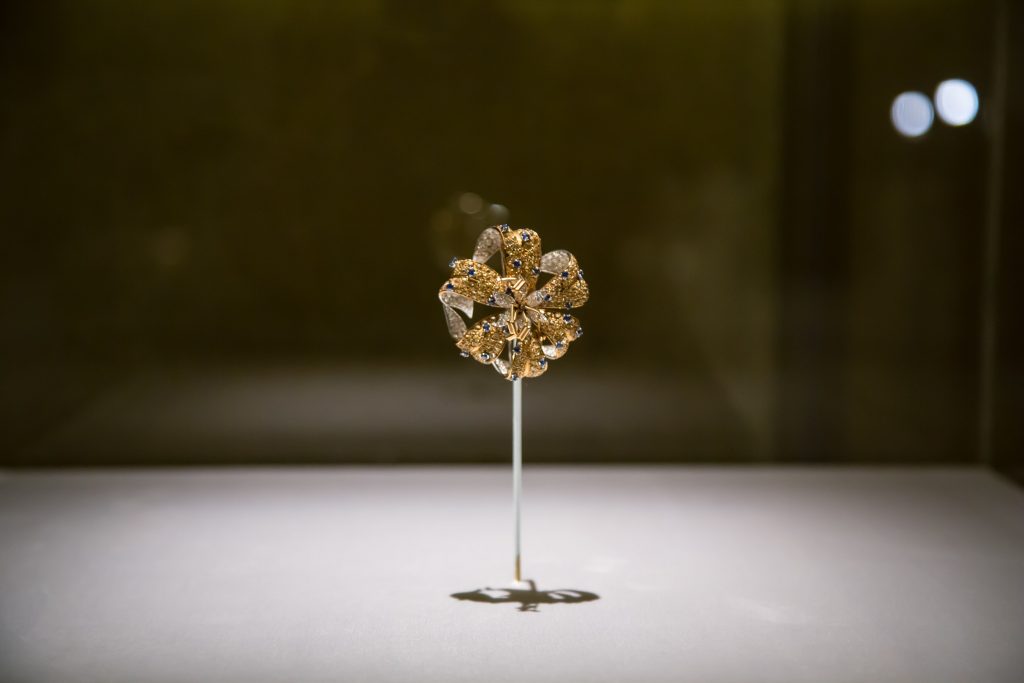 “I try to make everything look as if it were growing, uneven, at random, organic, in motion,” the designer once said of his design ethos.

The exhibition is dedicated to the vibrant and sculptural work of Schlumberger (1907–1987) who transformed 20th-century fashion with jewellery and accessories inspired by natural forms. The exhibition includes more than 125 pieces from Bunny Mellon’s Collection at the Virginia Museum of Fine Arts, the largest and most comprehensive public collection of jewellery and art objects by Schlumberger. The exhibition will feature the designer’s imaginative, witty and awe-inspiring interpretations of animal and botanical subjects, particularly marine life and flowers, which combine precious metals and gemstones, as well as organic materials. 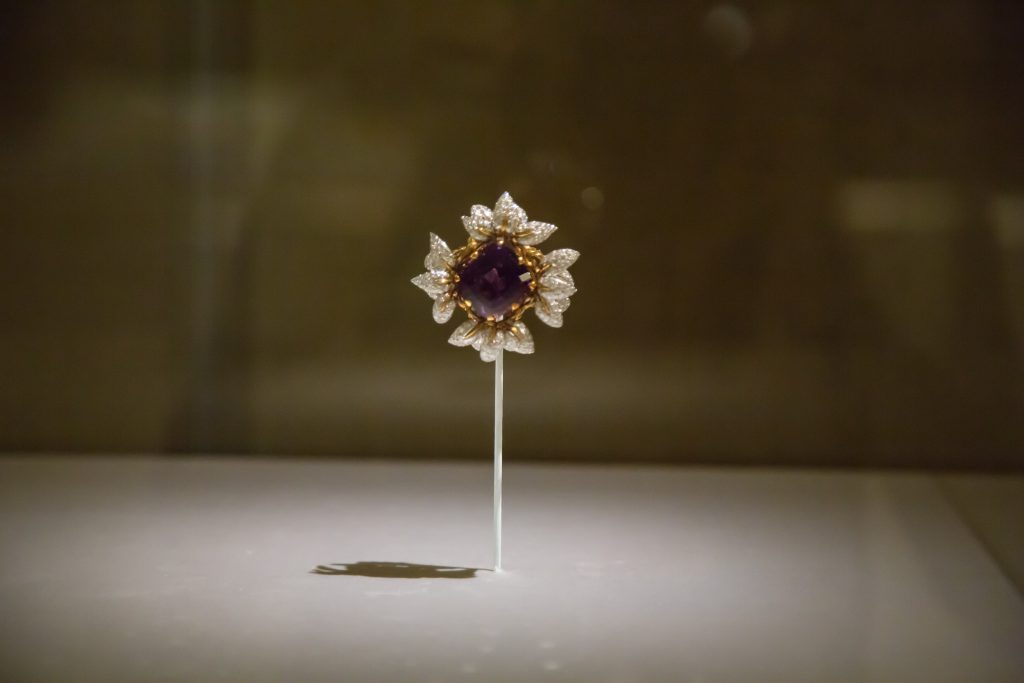 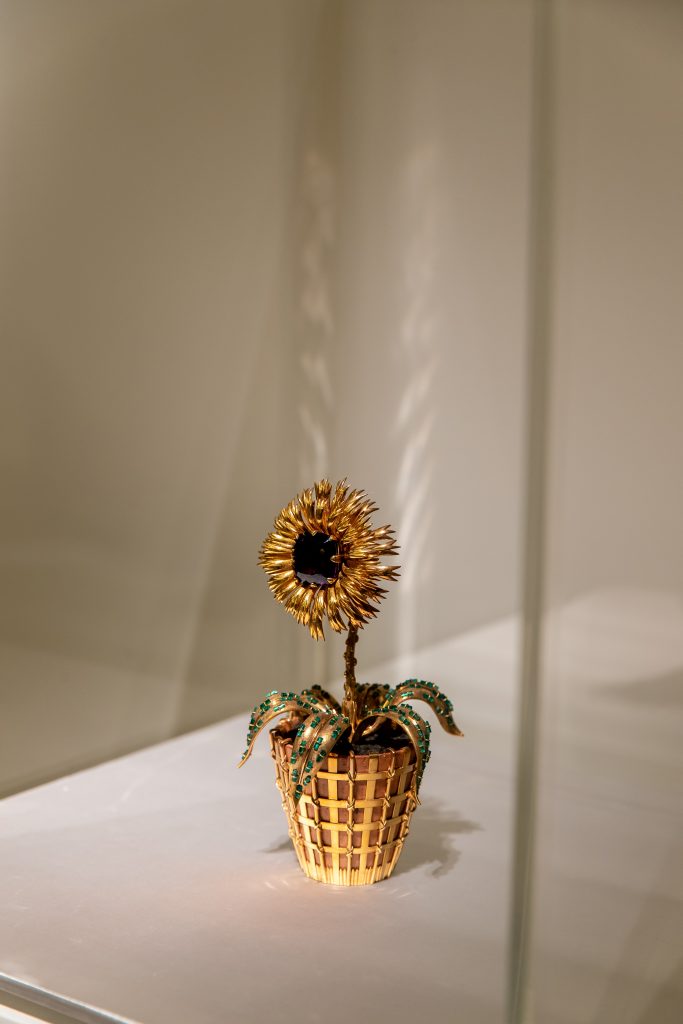 The Flower Pot was used as the base of a huge sapphire which has now been replaced by an Amethyst. This work of art includes emerald, diamond, black garnet ore, terracotta and gold and is one of the show stoppers at the exhibition with a story of its inception in drawings exhibited near it.

Sheikha Reem Al Thani, Director of Exhibitions at Qatar Museums said, “Schlumberger’s dazzling jewellery and art objects, which were inspired by nature, will certainly captivate visitors, just as the museum has through its organic design, resembling a desert rose.”

“This unparalleled collection of Jean Schlumberger’s iconic jewellery, accessories, and other decorative objects was given to VMFA by Rachel Lambert Mellon, one of the most generous donors in our history,” said Dr. Michael R. Taylor, VMFA. “These extraordinary works – with their vibrant colours, exquisite craftsmanship, and natural inspirations – showcase Schlumberger’s dazzling imagination and clarity of vision.” 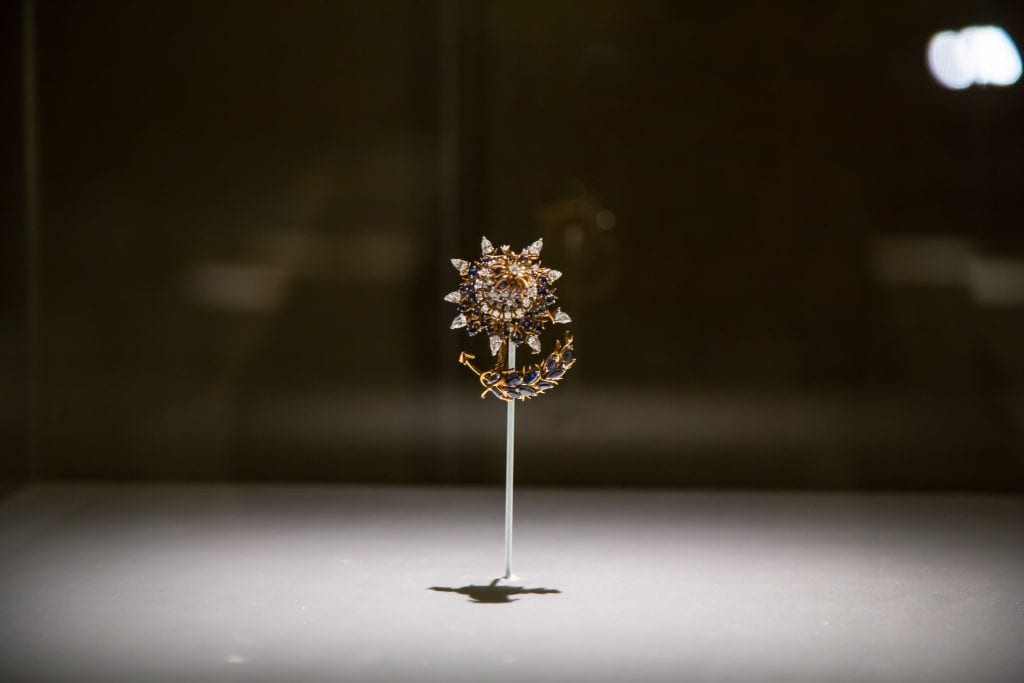 Works inspired by flora and fauna of the sea, including works for Tiffany & Co. that incorporated seashell motifs, and pieces influenced by Schlumberger’s visits to the coasts of Sri Lanka, Thailand and Indonesia

Schlumberger’s designs featuring precious stones would include diverse cuts, carat size, and colour –adding a multi-faceted dynamism to each piece. A natural lapidary (gem artisan), he shaped minerals and gems using the techniques of cabochon cutting to maximise a gem’s brilliance. 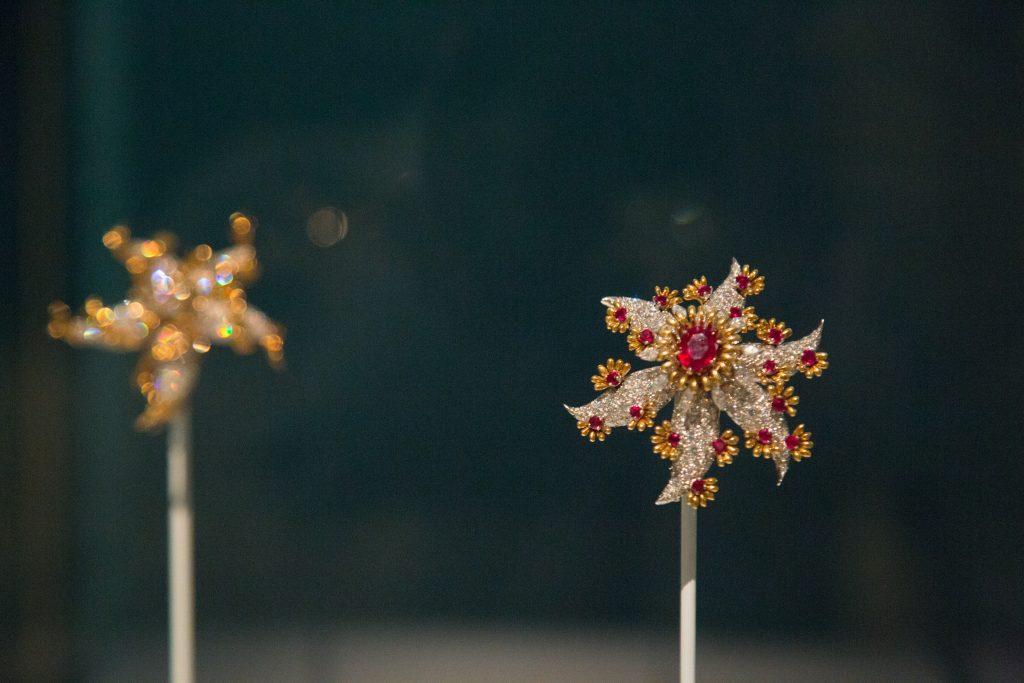 Beautiful designs like the starfish, jellyfish, a clam, and two fishes representing Pisces which was Bunny’s star sign are examples of Schlumberger’s love to recreate nature in jewellery pieces that was exquisite for the cut of the jewels and the intricacy of details. The jellyfish, for example, had moonstones that were cut in such a delicate fashion that it accentuated the shine and clarity of the jewel. The Jasmine necklace, which was also called the Breath of Spring, had large multihued sapphires intertwined with diamond-encrusted gold curves and spikes. 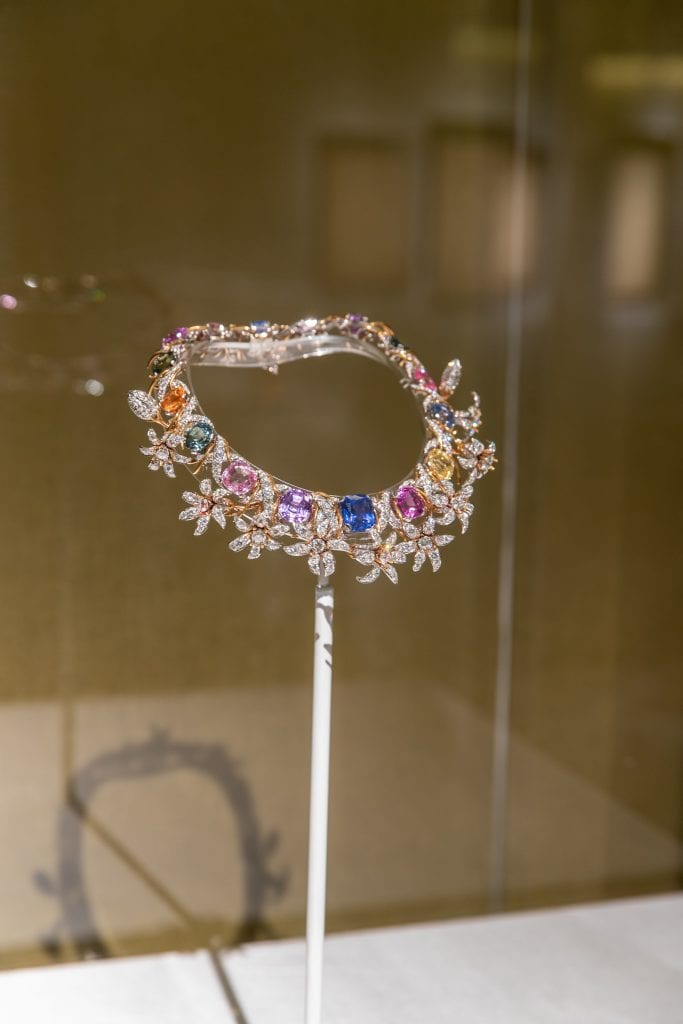 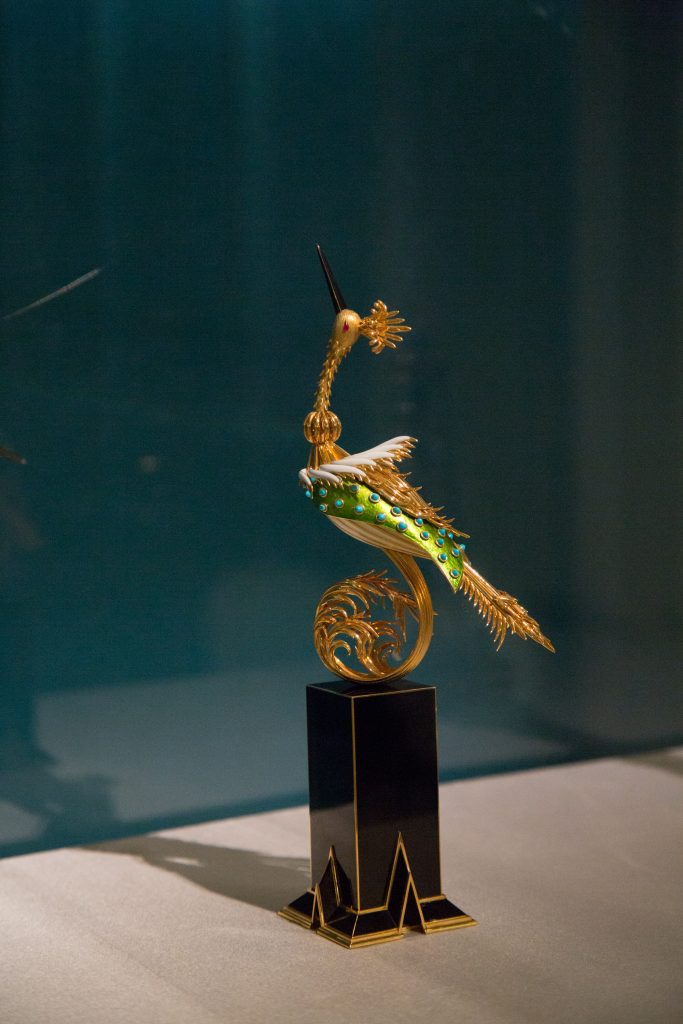 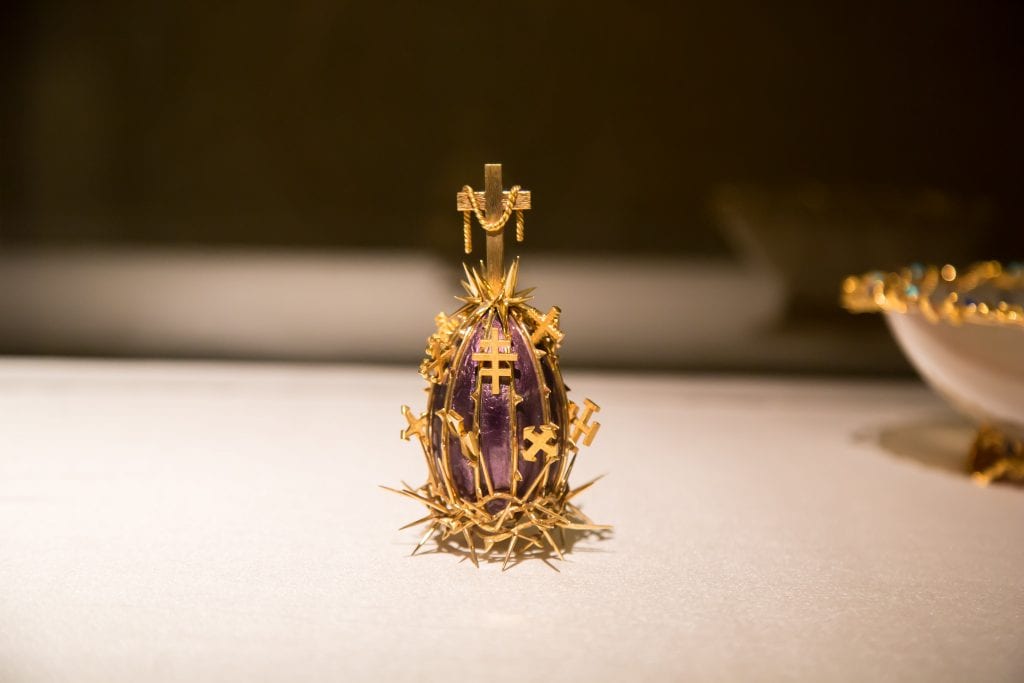 One of a kind, functional objects, such as an 18-karat gold “Salt Cellar,” as well as candlesticks and tabletop clocks with a signature geometric design, many of which were created for Bunny Mellon’s home.

Dr Taylor talks about this unique friendship between a patron and a designer which gave rise to over 140 pieces of exclusive jewellery made for Bunny by Schlumberger, of which 125 travelled to Qatar for the exhibition as the rest were too fragile to be moved. He says, “It was a very rare association and part of the friendship was because she had the money to acquire so many pieces which led him to design more and more for her exclusive use.” 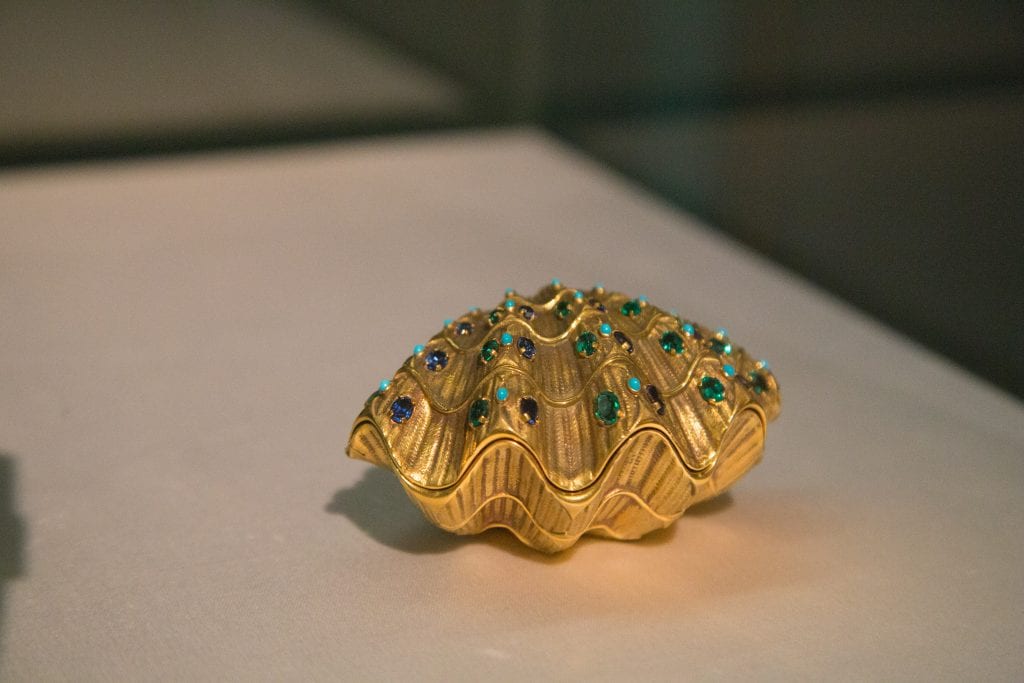 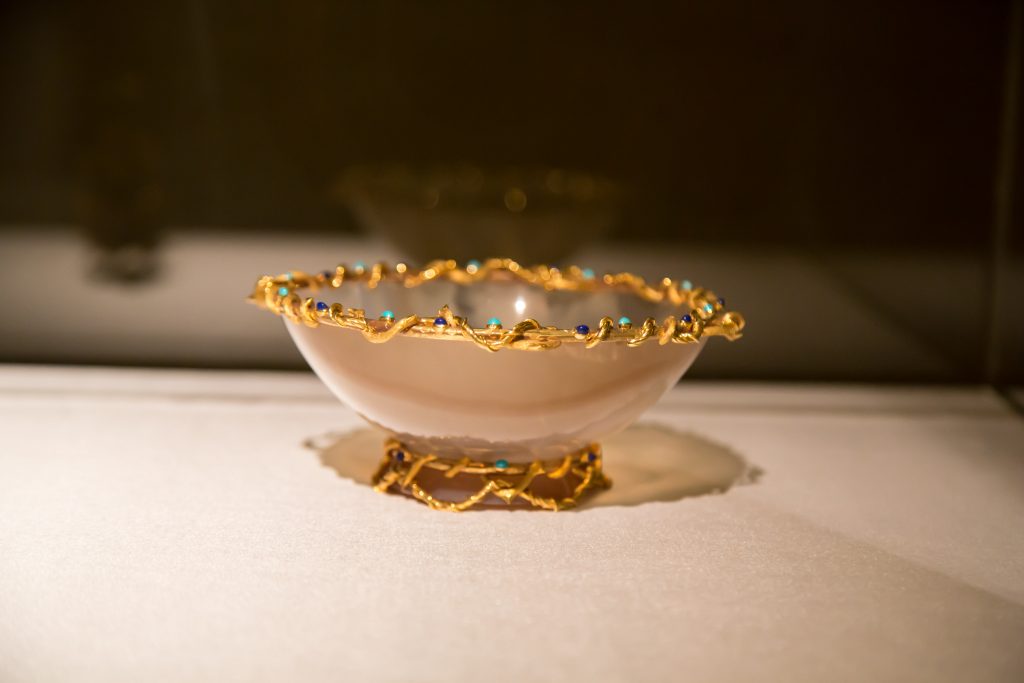 “There was a funny story,” narrates Dr Taylor, “People used to say to Bunny, that you don’t need so much, who would be able to wear it all, and then Bunny wore it all one day and showed it to her critics saying, “There I can wear all of it”.”

The exhibition is supported by Alfardan Group and Tiffany &Co. 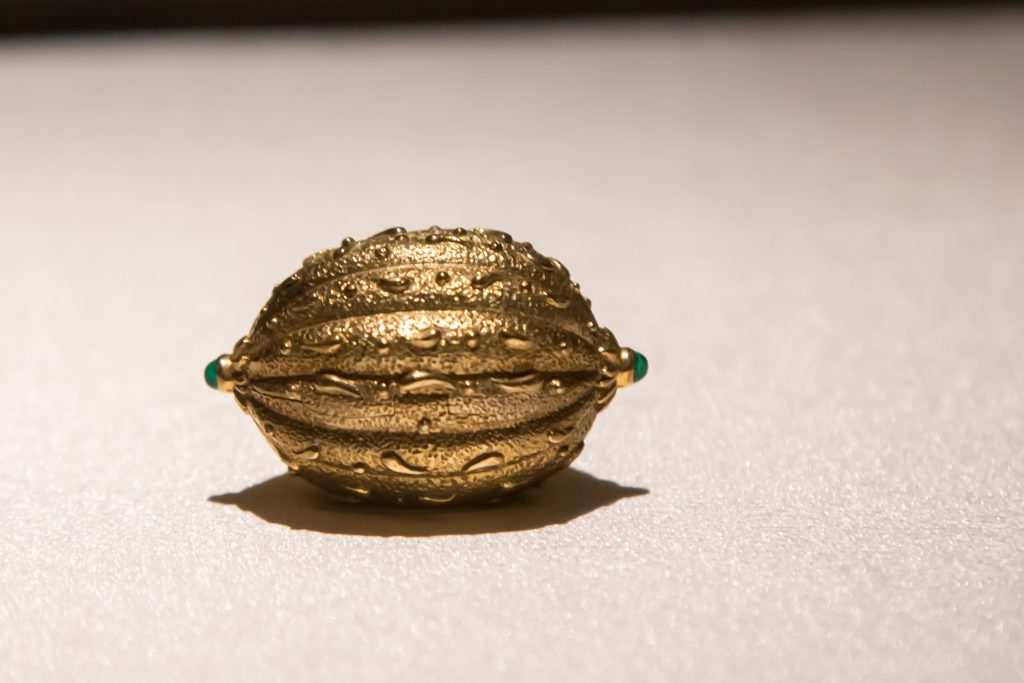 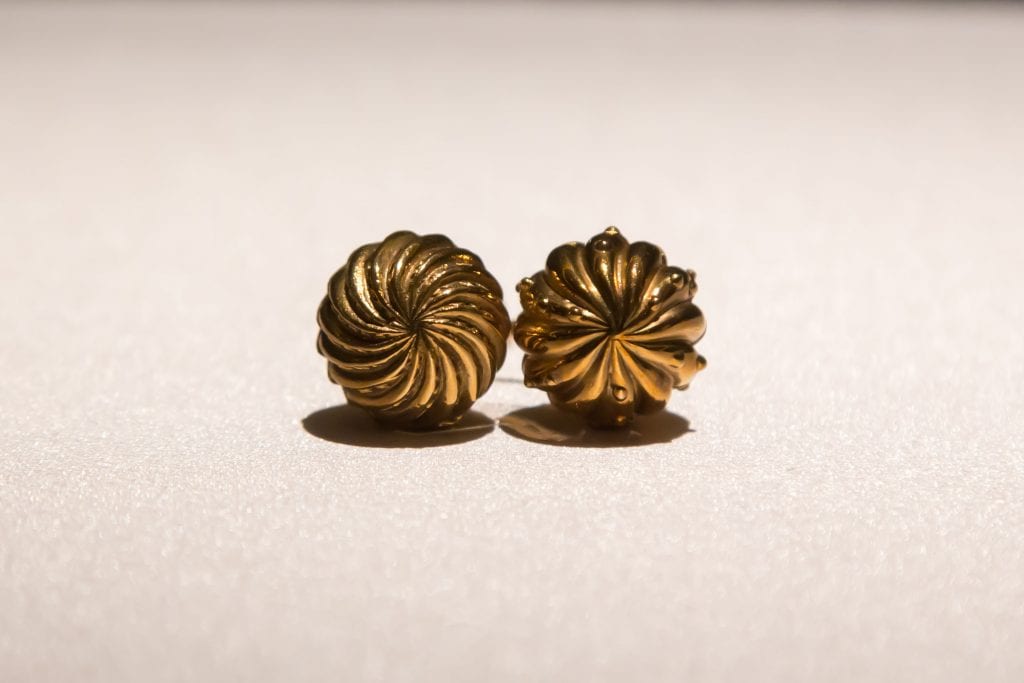