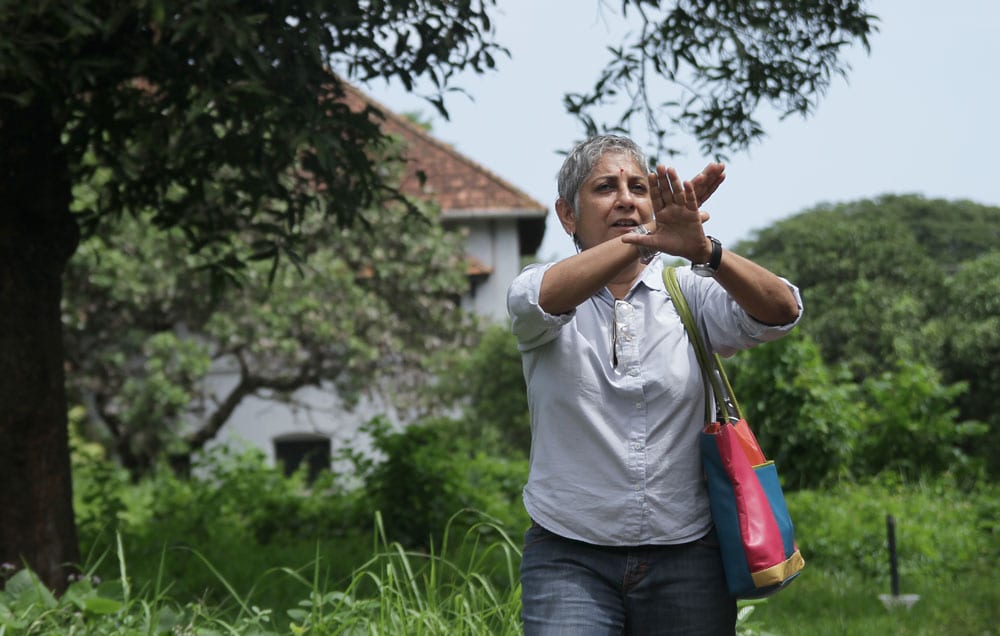 “A sense of satisfaction”

That is Curator, Anita Dube’s impressions as the time nears for curtains to fall on the Kochi-Muziris Biennale 2018.

Fort Kochi has a certain old-world charm. During the Kochi Muziris Biennale, an art exhibition and festival that is said to be the largest of its kind in South Asia, the town seems to come alive. Every paved alley in Fort Kochi is bursting with youth hurrying around on a mission, beaches are lined with the famous Chinese nets as if on display for the huge gathering and musical programmes staged on its land periphery complement the general cacophony. Art cafes built into nooks and corners of alleyways become cosy venues of the Biennale, stunning Dutch and Portugal homestays with their sloped wooden roofs and slated brown tiles are filled to capacity. Restaurants known to serve the best sea food rarely have a free seat to offer. The heat wave beating down on Kochi does not dampen the spirt of the visitors as they surge to catch the Kochi Muziris Biennale in its final month, in the fourth edition of the cultural festival.

SCALE sat down with Anita Dube, the curator of the 2018 edition of the Kochi-Muziris Biennale for her thoughts as the show winds down.

Anita: There is a sense of satisfaction as a lot of people come to me and say they feel connected to the Biennale. For me it is not just about the slogan where the local people say it is our Biennale. For me it is beyond the slogan. If an art enthusiast or a visitor feels connected to the artworks on display at the festival and if the artwork speaks a language that is not alienating, that for me, brings a sense of fulfilment.

SCALE: Is there anything that you would have done differently now that you have the experience of overseeing and bringing together a Biennale (almost) behind you?

Anita: Nobody is perfect. One always dreams big and it is not entirely possible to attain all that you had wanted. What you are able to negotiate or collaborate and bring to the table is much more important than what you started off with.

But now that you have asked, I could perhaps wish for more local participation in the Pavilion, where there is an open mike for anyone to share whatever they want. I wanted participation to come from the locals. I wanted someone from the general public, say, an auto driver to walk in and give vent to his feelings on the Biennale or about anything that he wished to talk about. He could do that at the Pavilion as there was no ticketing and an open mike. 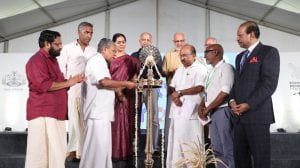 SCALE: Would that lack of interaction be because the message was not clear enough for the local community?

Anita: I do not speak Malayalam. I am not from Fort Kochi nor am I from Kerala. I come from Delhi. I could not break the “you and us” barrier between the locals and the Biennale. I feel we have to bring in as much local participation as possible to achieve the perfect festival for the masses.

SCALE: How strong were the communication channels between you and the previous curators of the Festival? Have they shared similar concerns?

Anita: I am an artist and I have visited the last three Biennales and I knew what is going on. If I had an ongoing conversation with the previous curators’, there was a strong possibility of my work being influenced by theirs. The Biennale would be like old wine in a new bottle. I could not let that happen. Each curator has to bring in his or her own experiences to the festival.

SCALE: Do you have a personal favourite of the artworks on display? Do you think one of the installations or artworks has influenced the visitors more than the others?

Anita: Each one of the installations is my baby. I have selected them over a body of work and I have placed them next to one another, with a certain thought process. There are big ones and there are small ones, but all of them have some significance to the story we are weaving at the Biennale this year.

Like Shirin Neshat’s work called Turbulent, which is one of her older works, but I insisted that this is the one to be bought to the Biennale as it speaks of issues that are pertinent now.

Shirin is an Iranian-born artist and filmmaker living in New York and her work is predominantly in film, video and photography. In Turbulent, she focuses on gender differences; with the use of dual projectors on two sides of the room, one of a man who sings a famed Iranian love song in Farsi to an auditorium filled with appreciative men and on the other side the woman is clad in a black dress and she sings in haunting visceral resonances and throaty guttural utterings to an empty venue. The work is in reference to the Iranian tradition where women were not allowed to perform alone, and the woman’s haunting voice seems to reflect an inner fear or exhaustion while the men seem happy to follow conventions and seem to be bound by what is expected of them. 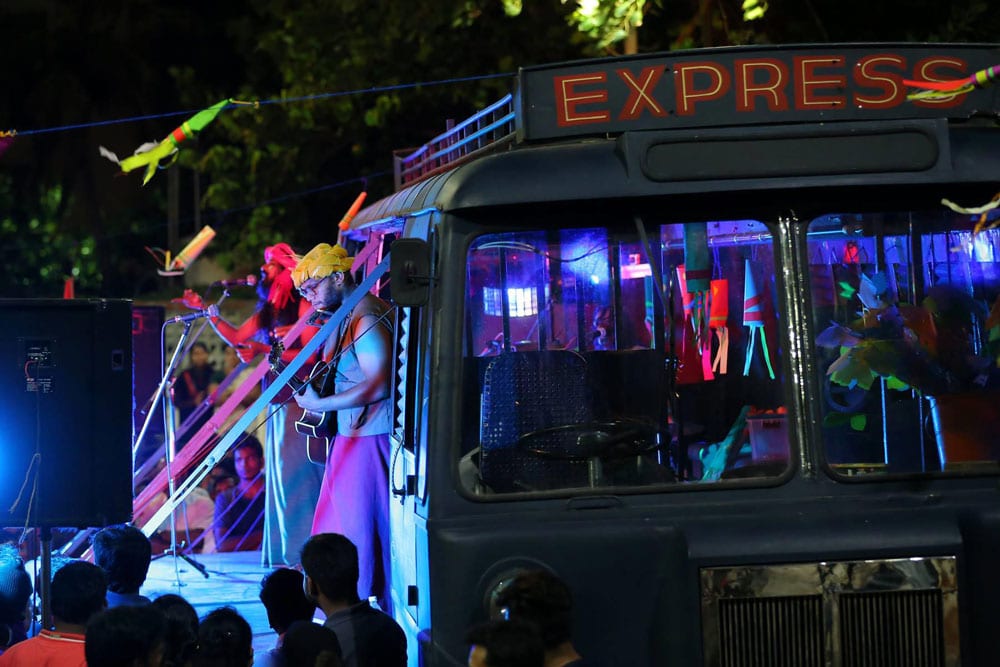 Do Biennales bring in more collaborations? How has it helped in this edition?

Collaboration is the buzz word in the art world these days. Collaborations have to be genuine to have a deeper impact, it has to be time-based and in context to be of real value. Like the collaboration, we have with Oorali, a contemporary conversational band known for their political themes and songs. Oorali uses music as its language and spreads the story of the Kochi Biennale along the coastline of Kerala to remote villages and to their fisherman community who have no idea of what is happening here. The music is not only a way of taking the Biennale message to the fishermen community of Kerala who has been the mascots during the Kerala floods but it is also to express their appreciation for their contribution thus interacting with the community on a one-to-one basis. This is a collaboration that is so in sync with our theme of non-alienated life.

SCALE: Does a Biennale really affect the local community?

Anita: Culture does not have quantifiable results, but culture does transform people. It takes people away from violence, the baser kind of preoccupation. It might not have immediate effects but it will surely have a long-term reflection on the community. This is a reflection of the wisdom of the Kerala government in collaborating with the Biennale Foundation and contributing to the cultural transformation of its people.

Scale chooses Installations that you should keep an eye out for at the Kochi Biennale 2018: 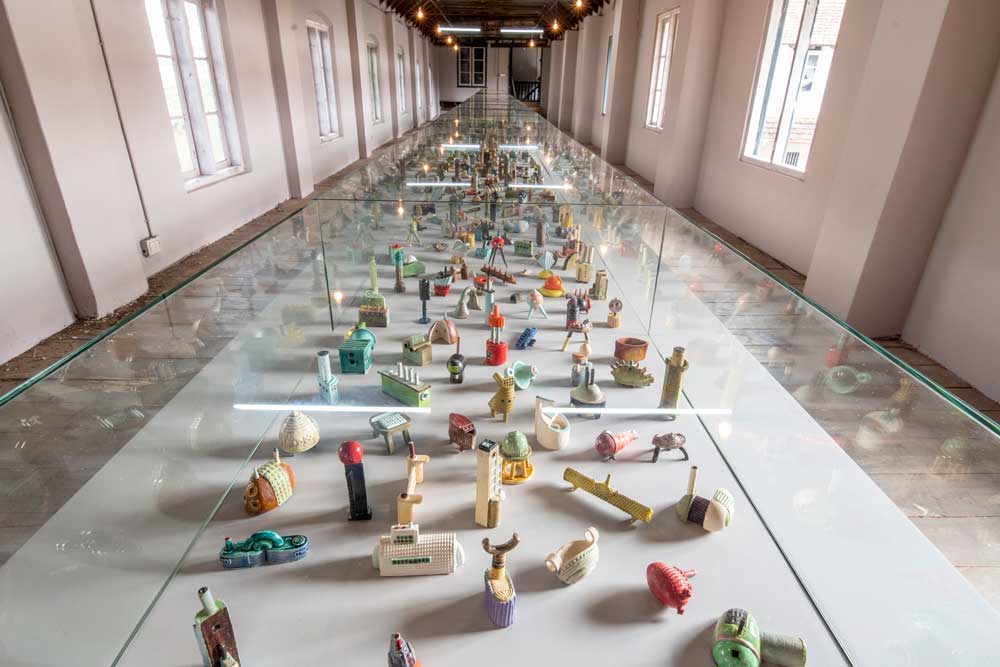 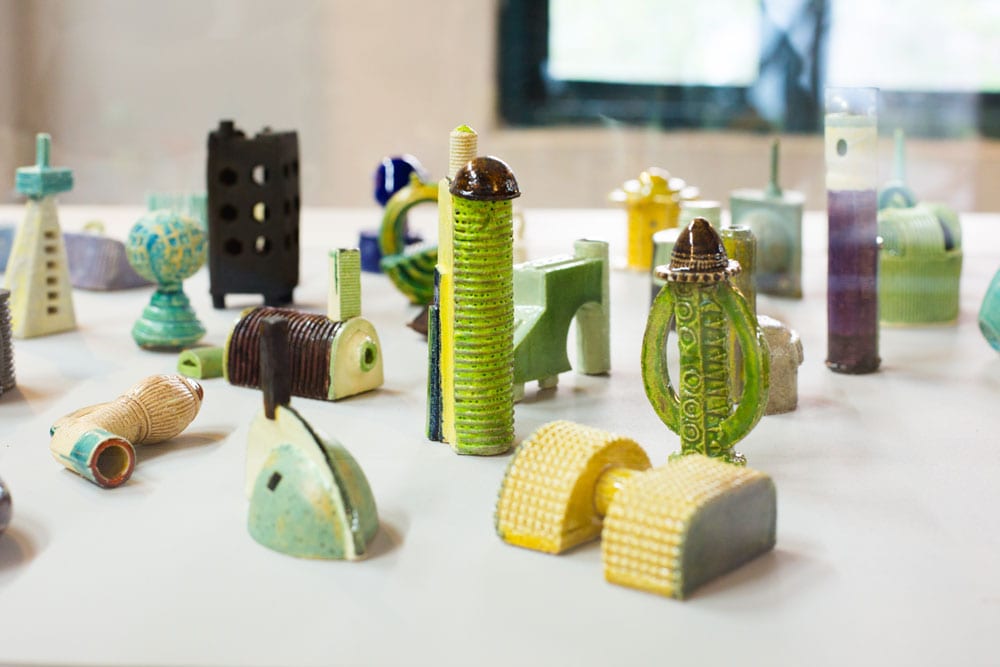 This artform by Lubna Choudhary comprises of 1000 pieces and has taken the artist around 25 years to complete.

Metroplis abstracted towers, monuments, buildings and some less definable forms, in an act of subverting the preciousness of the medium in the history of art. This offers the viewers multiple opportunities of engagement; from above, below and afar. 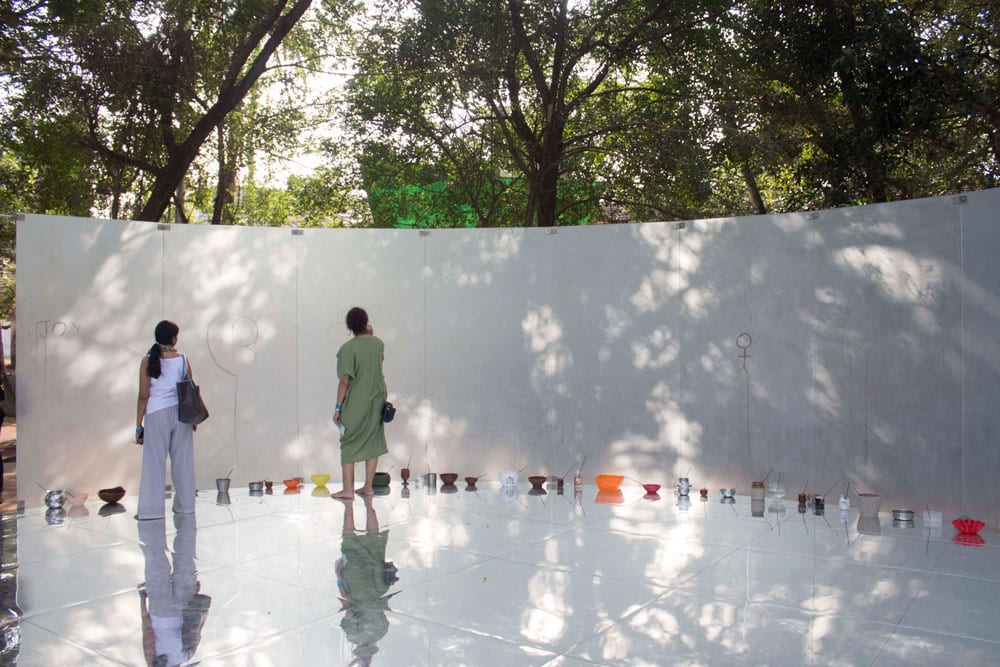 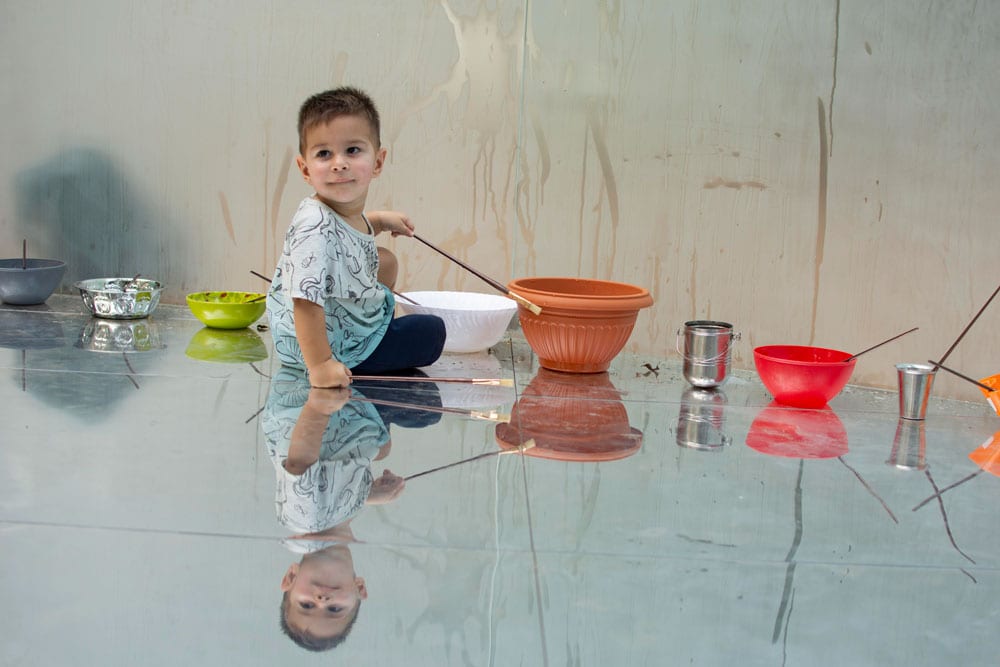 This art piece by Song Dong must have been the one that elicited maximum crowd participation, with children and elders alike taking time to write their names on the glass panel with Chinese calligraphy pens, which would soon be wiped away, to be written over by another visitor.

The Water Temple is an extension of his Writing Diary with Water, a performance that emerged with childhood memories of his father encouraging him to write without wasting pen and ink, and Song continues to perform this act as a therapeutic ritual that leaves no trace. 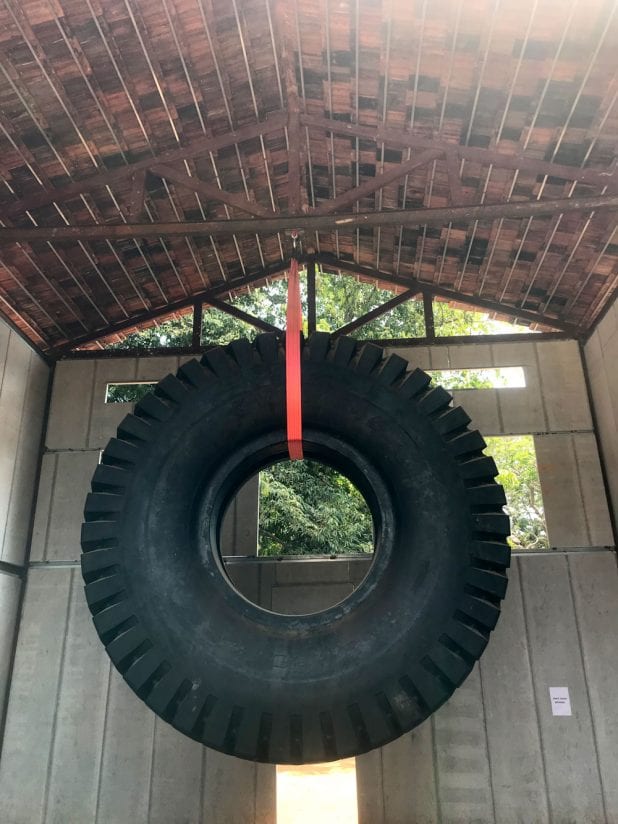 Work of E.B Itso, a subversive artist whose practice brings to light the underbelly of urban spaces and the margins of everyday life. In this installation he has hung a huge rubber tyre in mid-air in a claustrophobic space which here is in the centre of the premises. The tyre’s overwhelming presence points to the environmental impact of development related to tourism in the region, that goes unnoticed as urbanisation or illegal construction in this case. One of the disastrous outcomes of these unfettered constructions was the Kerala floods. It also expresses the irony in this cycle, as rubber comes from trees common to the region and the phenomenon of economic downfall that prompted many farmers to commit suicide when the rubber prices crashed in 2015. 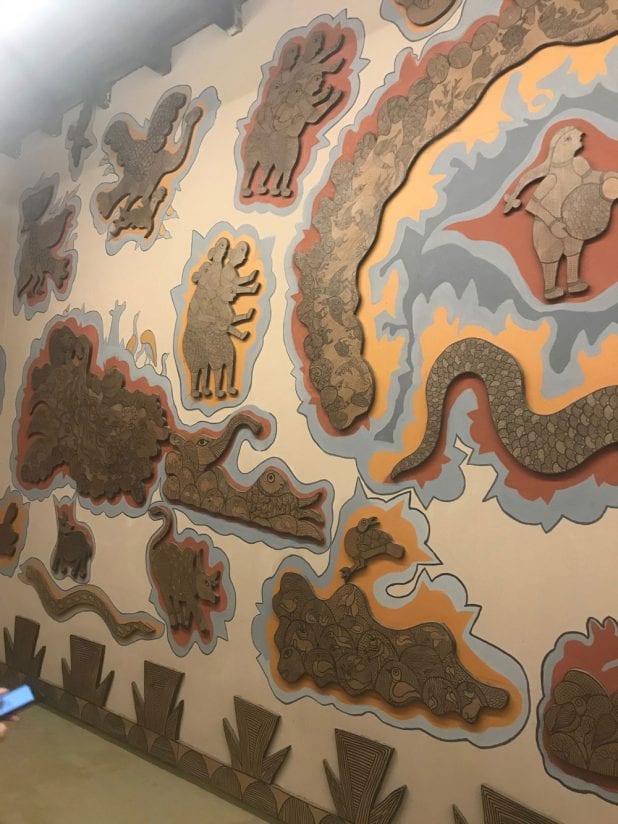 A wall-based installation with painting on marine plywood

This project by Durgabai Vyam and Subhash Vyam who are recognised artists from the Gond school of painting, is a wall-based installation with painting on marine plywood that is cut out in various shapes outlining the flora and fauna of the folklore. The room where this distinctive old art form is installed seems to come alive in traditional and natural colours with forms and figures giving the characters of the installation a human-like quality. This installation evokes a lot of interaction with the visitors finding out more about the form of art and all seem to be captivated by the beauty on the walls.