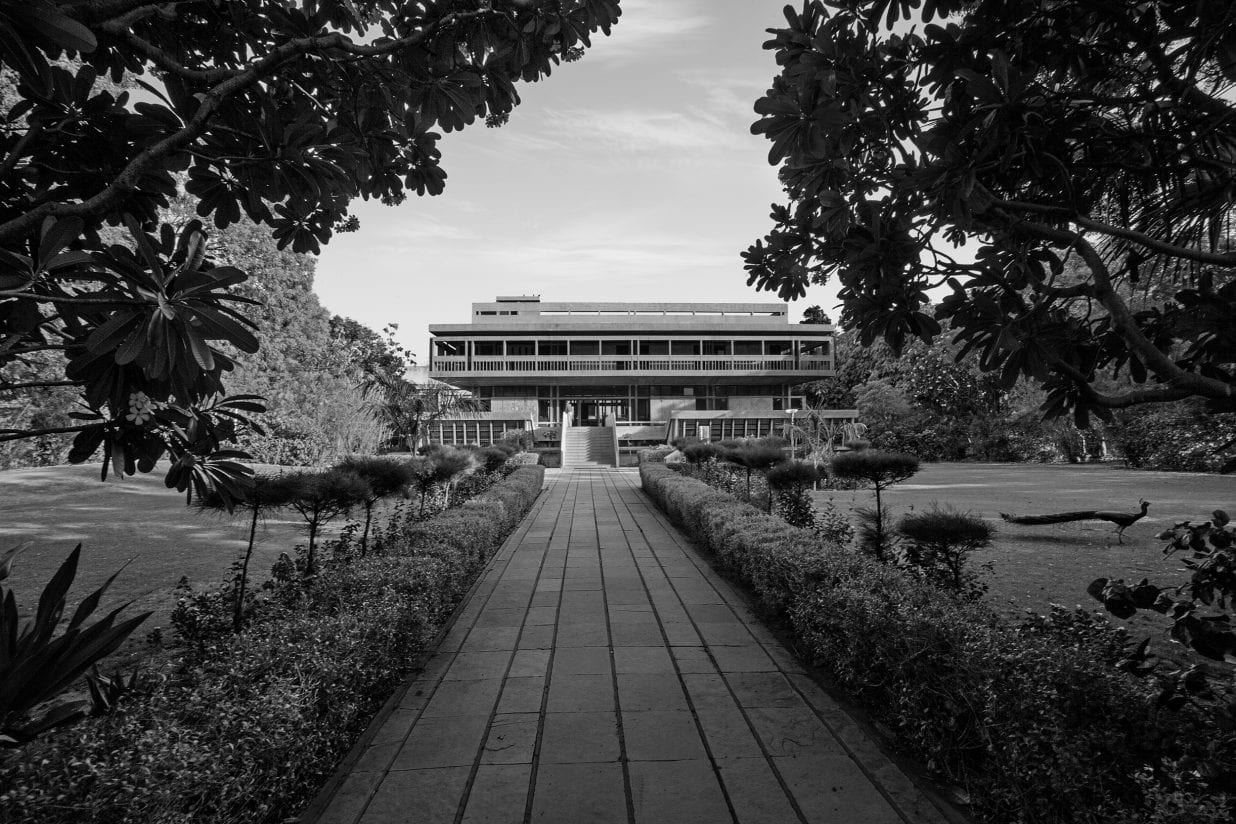 Architecture For The People 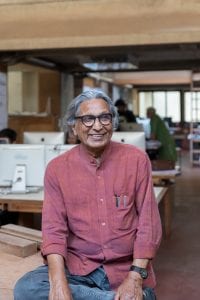 The exhibition “Architecture for the people” presents numerous significant projects realised between 1958 and 2014, ranging in scale from entire cities and town planning projects to academic campuses as well as cultural institutions and public administrative offices, from private residences to interiors. Among these works are pioneering buildings like the Indian Institute of Management (1977, 1992), Doshi’s architectural studio Sangath (1980), and the famous low-cost housing project Aranya (1989). Exhibits include a wealth of original works such as drawings, models, and art works from Doshi’s archive and studio, but also photography, film footage and several full-scale installations.

An extensive timeline gives an overview of the architect’s career from 1947 until today, attesting his close relationships with other influential architects and thought leaders such as Le Corbusier and Christopher Alexander. Doshi’s approach oscillates between industrialism and primitivism, between modern architecture and traditional form. His practice is based on ideas of sustainability and aims to root architecture in a larger context of culture and environment as well as social, ethical, and religious beliefs. 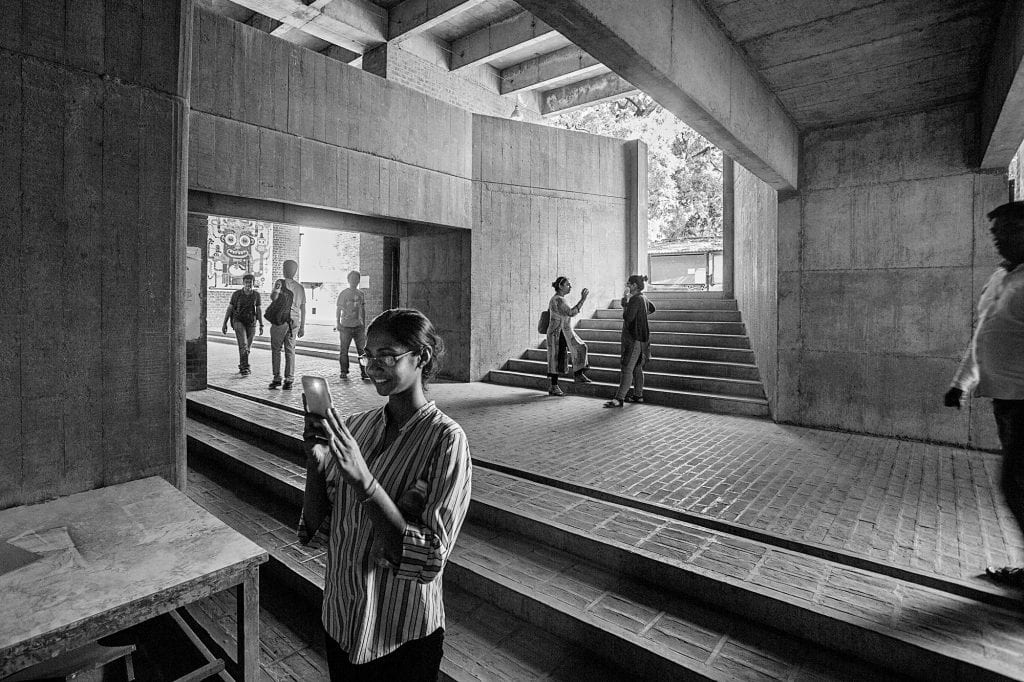 The retrospective follows four main themes, beginning with a look at Doshi’s educational buildings. A key project here is the campus of the Centre for Environmental Planning and Technology (CEPT) in Ahmedabad. In 1968, Doshi established the School of Architecture- a multi-disciplinary institution grounded in belief that education is nourished by interdisciplinary interactions. To foster exchange and dialogue among students and faculty, Doshi designed the building as a free-flowing space without compartmentalisation or segregation. Both through its buildings and its teachings, the school has changed the face of architectural education in India; it has also become one of the country’s most important centre for urban planning. 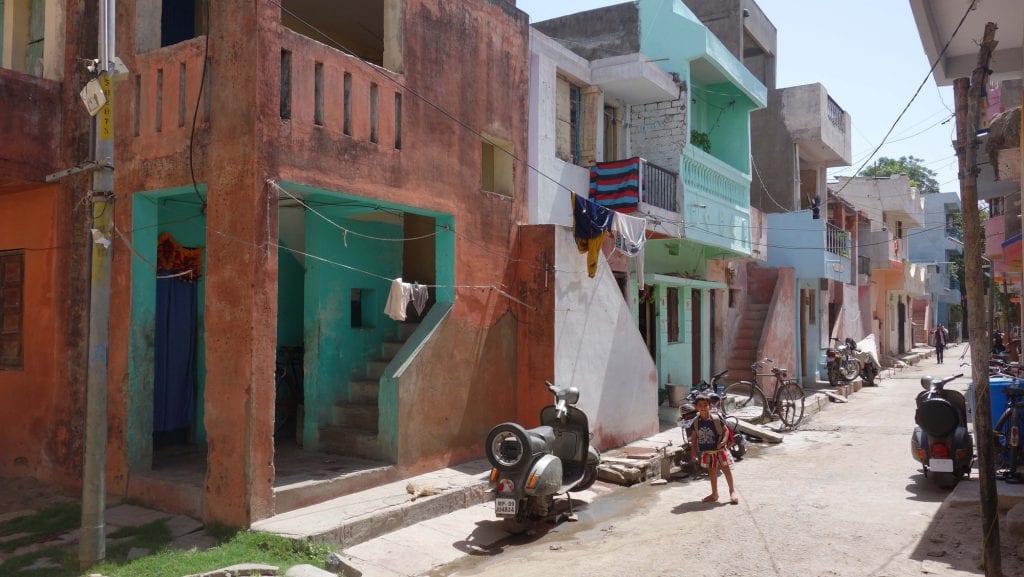 The exhibition’s second section focuses on home and identity and examines the power of architecture to bring about social change. Inspired by Mahatma Gandhi, Doshi developed new approaches to social and experimental housing based on participation and the possibility to adapt to the users’ changing needs and requirements, as seen in such outstanding examples as the Housing Development for the Life Insurance Corporation of India (LIC), known locally as Bima Nagar, in Ahmedabad (1973) and Aranya Low Cost Housing (1989) in Indore. 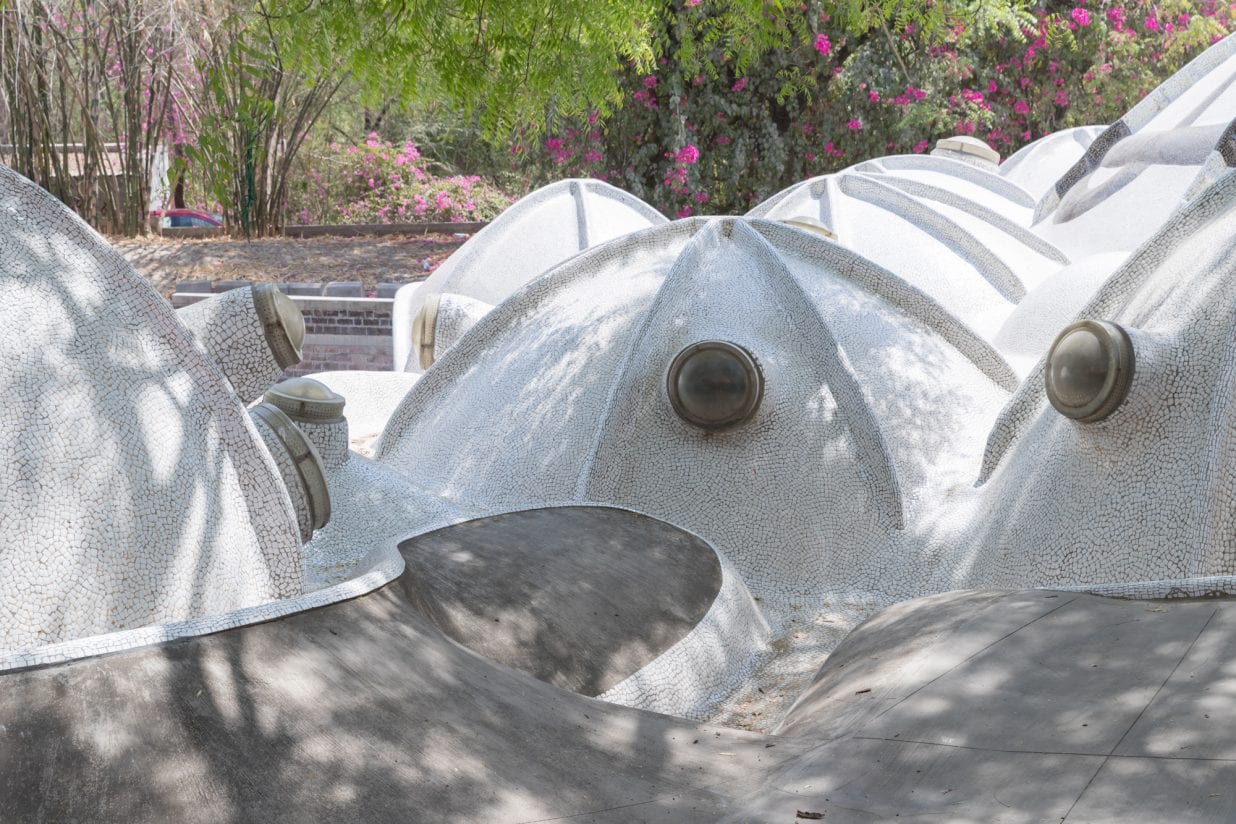 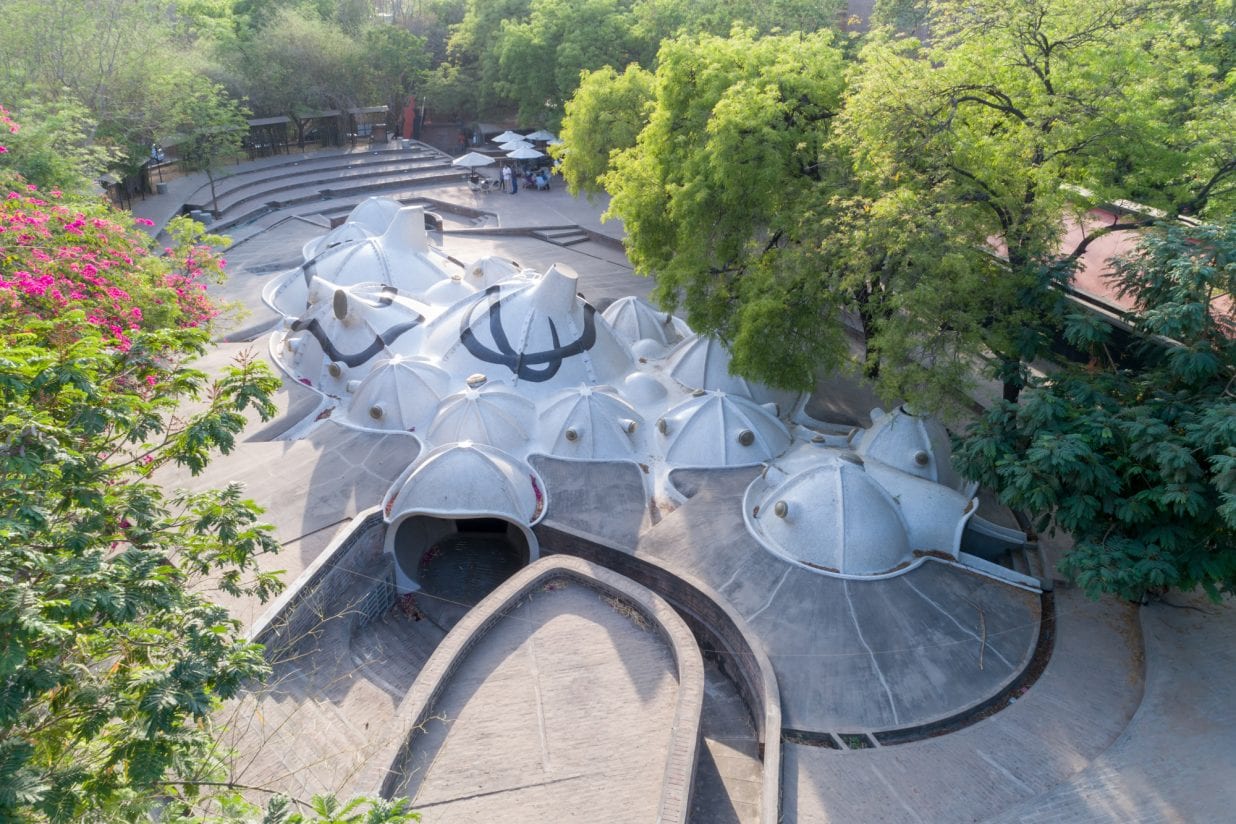 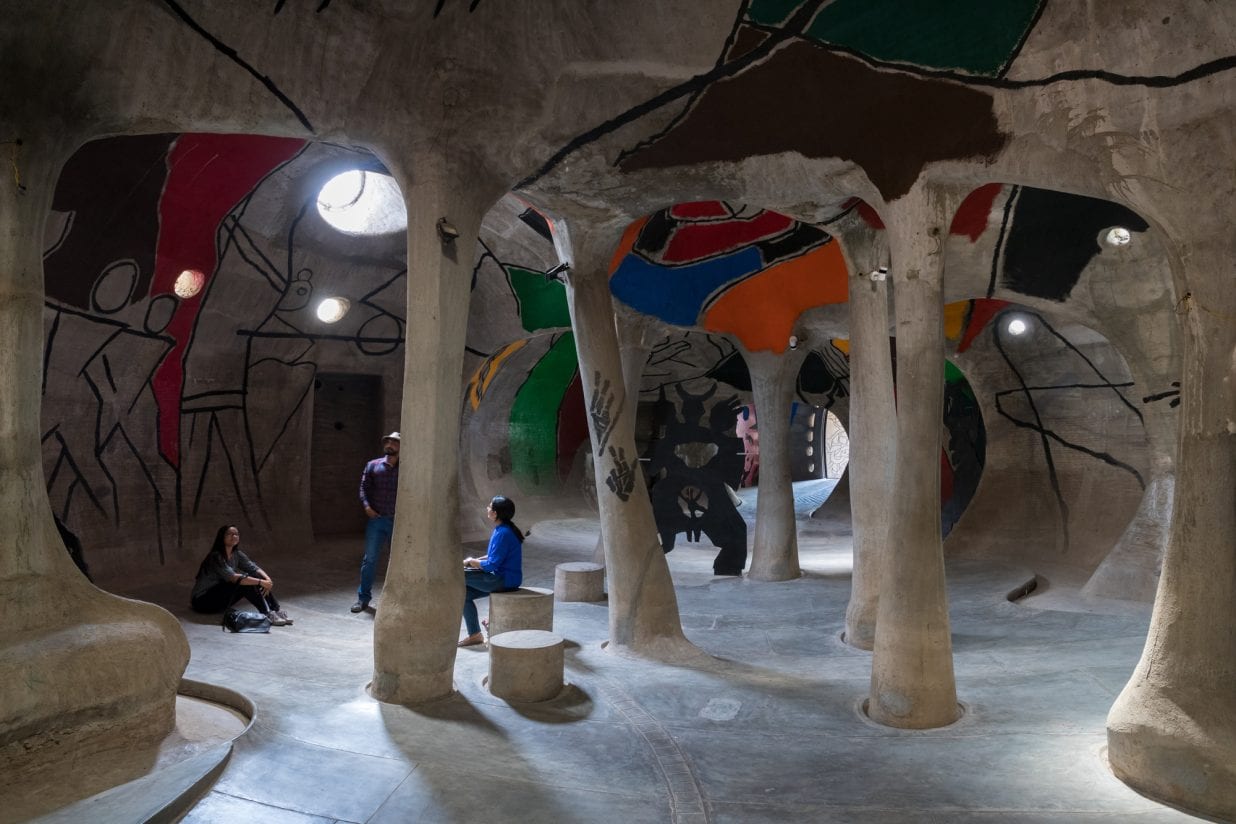 The third section revolves around the many institutions Doshi has participated in building during the last 60 years. An important example for this is the Indian Institute of Management (IIM) in Bangalore (1977, 1992). The large campus of this institution was built over a period of 20 years in a process that involved numerous additions and alterations. With its fascinating architectural conception, the Indian Institute of Management has become an important think tank contributing to India’s emergence as an economic power over the last decades. 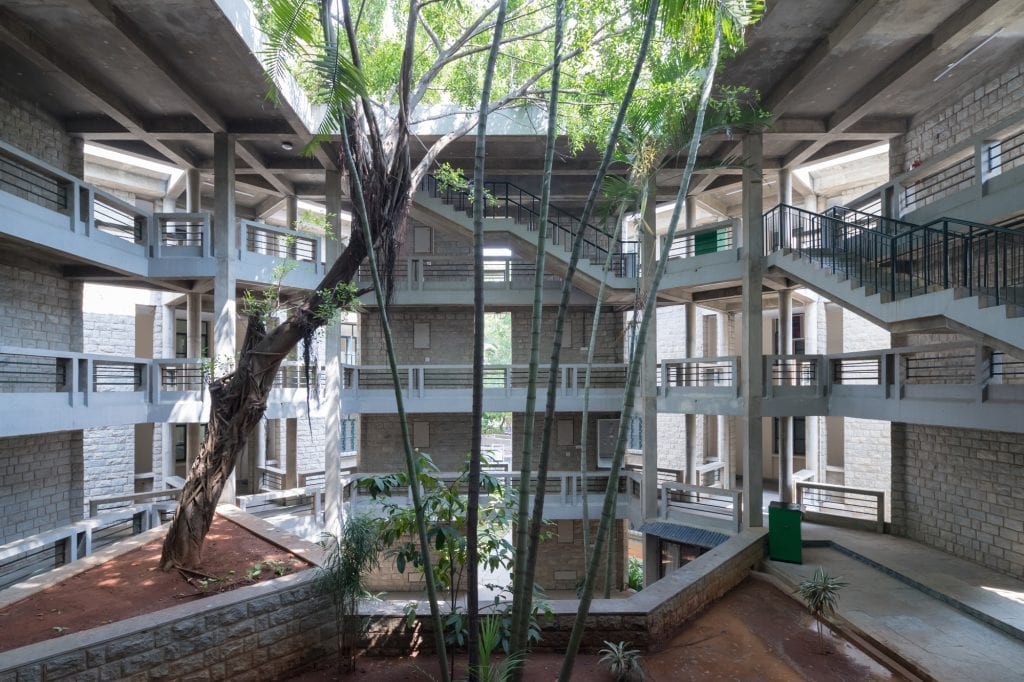 Another milestone in Balkrishna Doshi’s institutional architecture is his own studio Sangath in Ahmedabad (1980). Memories of his childhood home and of Le Corbusier’s studio in Paris are fused in this building’s vocabulary of spaces.

The final section of the exhibition is dedicated to Doshi’s large-scale town planning projects, exemplified by the masterplan and urban design guidelines for Vidhyadhar Nagar (1984), a residential development for 150,000 dwellings located in the outskirts of Jaipur in Rajasthan in northern India. Conceived as an energy-conscious city on a 350-hectare site, it is inspired by the old walled city of Jaipur. The exhibition is a project by the Vitra Design Museum and the Wüstenrot Foundation in cooperation with the Vastushilpa Foundation.