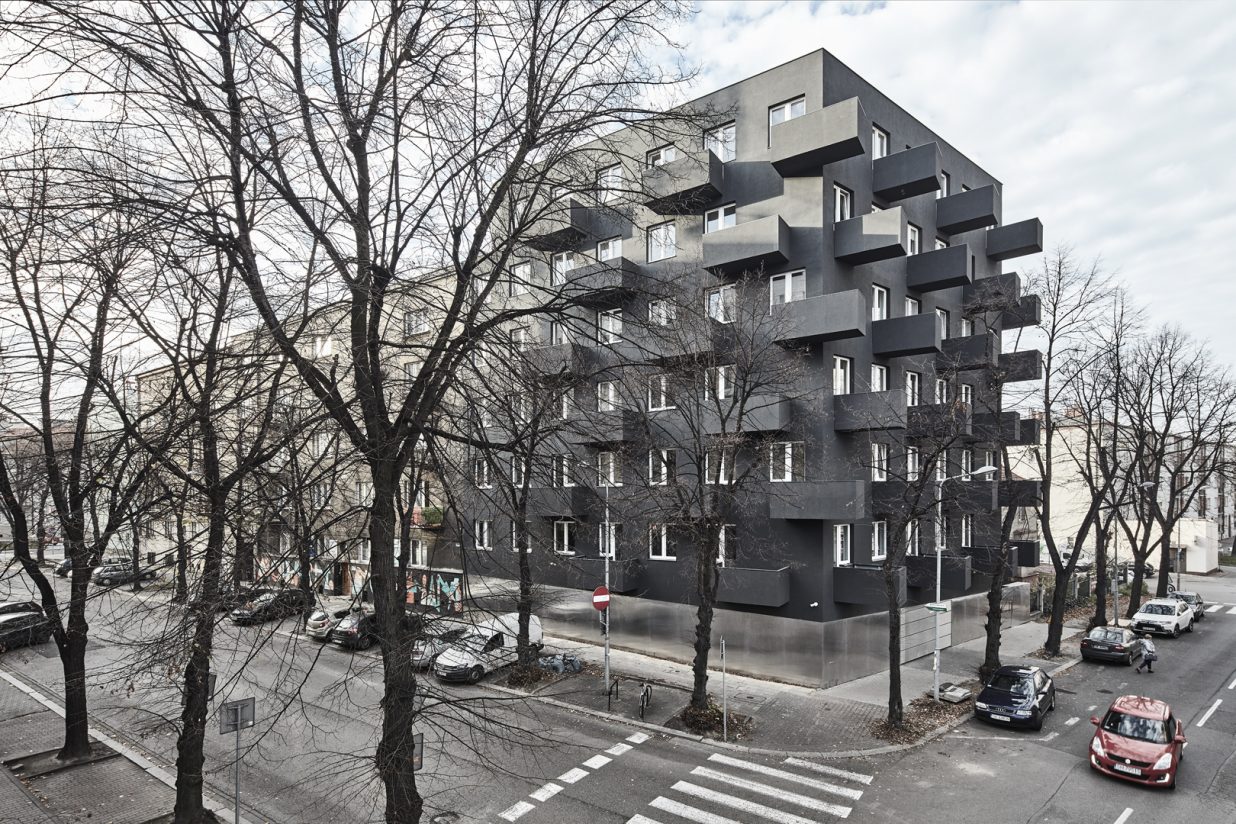 Unikato is a low-budget residential building, designed by KWK Promes that tries to breathe new life to the depopulating downtown of Katowice, Poland, a city dominated by car traffic, bringing in people from the suburbs.

Katowice was once a dynamically developing industrial city with impressive modernist buildings. Today, the city is experiencing a demographic crisis and suffers from sub-urbanisation. There is a lack of new residential buildings, and the city is subordinated to car traffic generated by people coming here every day to work from the sprawling suburbs. 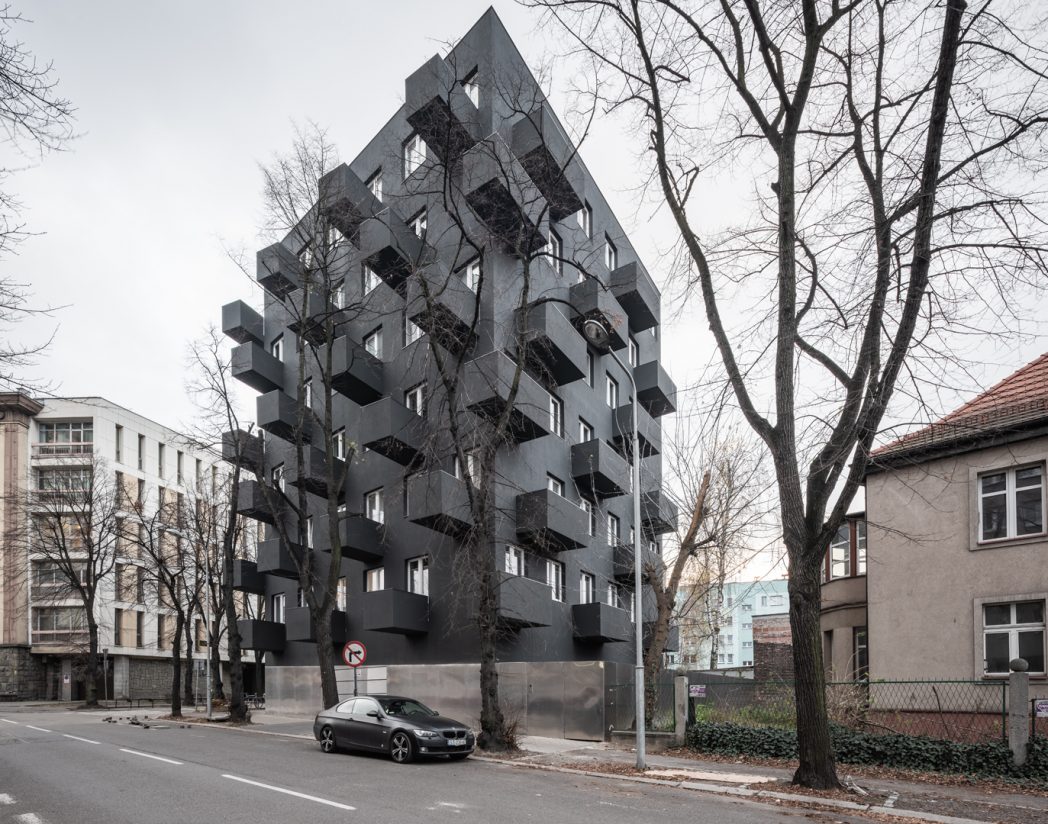 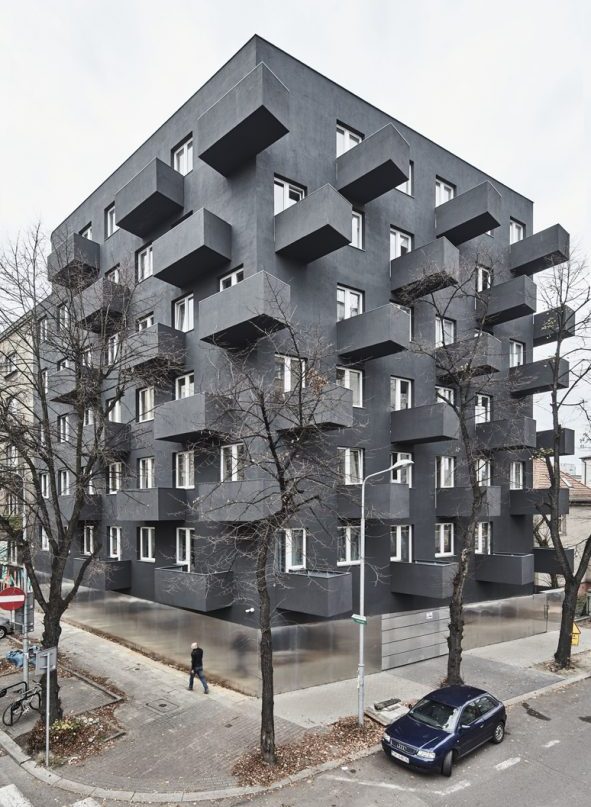 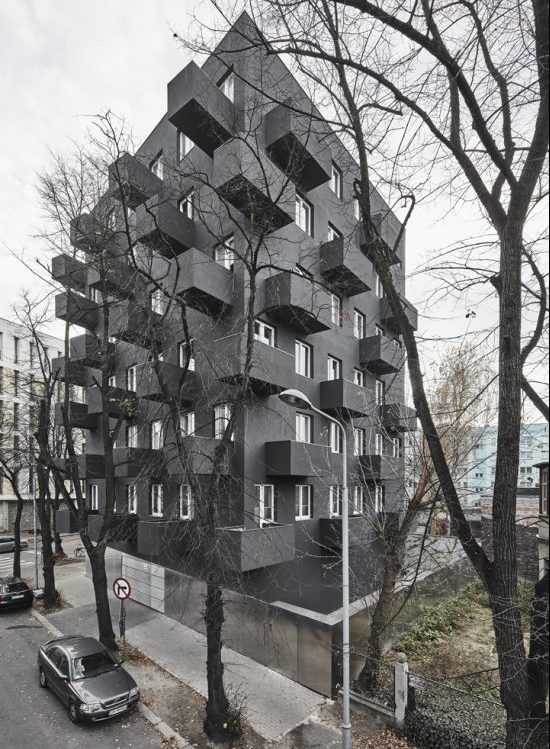 Unikato is a residential mid-rise tower, built with minimum resources and a desire to reverse this trend and to breathe new life into the downtown. It was designed by the award-winning architect Robert Konieczny of KWK Promes

Modernist buildings of Katowice, once bright, after years of being exposed to smog, gradually got dirty and became almost black. Their white windows contrasted with the black of the facade. This observation become an inspiration to the architects for this project. 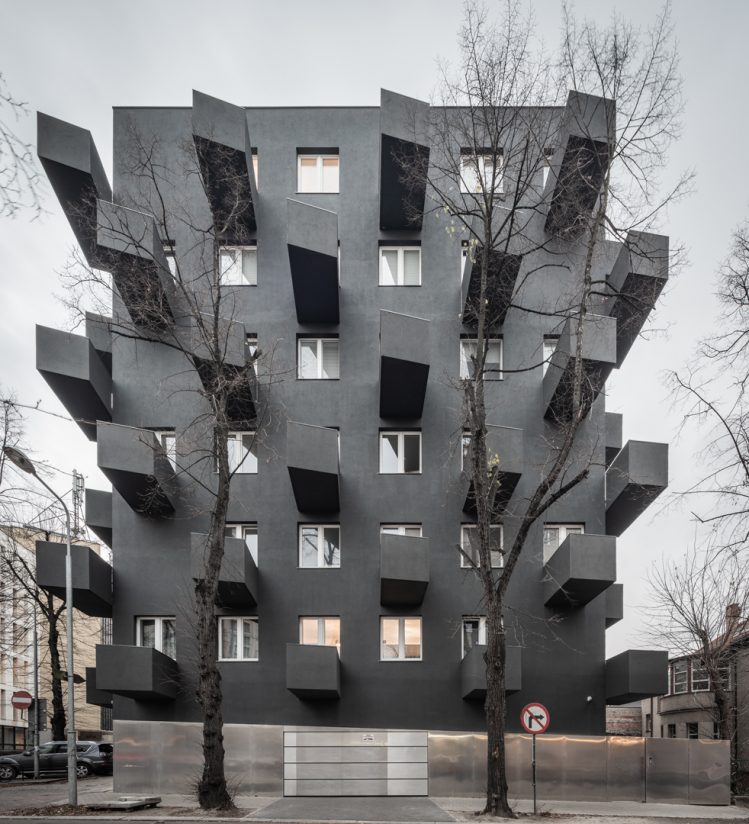 According to the architect, the investor provided funds only for a economical finish – Styrofoam, plaster, white plastic windows – and for the balconies, which were to be a storage space for small apartments. “The building is dark and is inspired by pre-war, smog polluted modernist architecture of the city with which it establishes a dialogue,” says Robert. 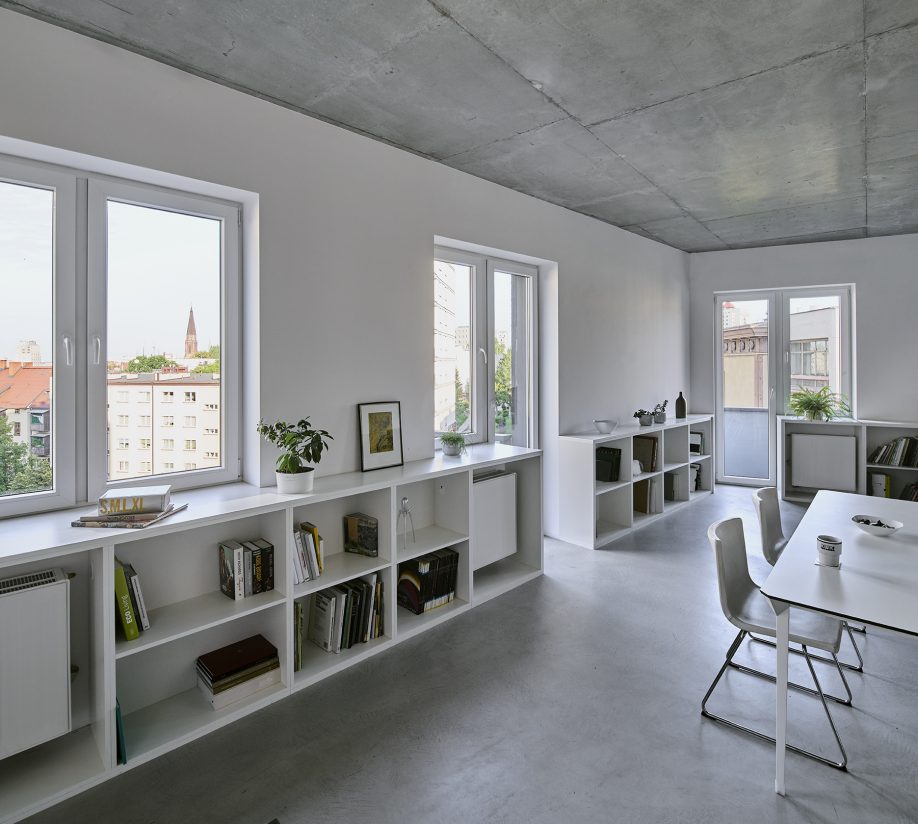 The idea for the façade came from the neighbouring buildings according to Robert, “dirty plaster colour, pedestal in the basement typical of the surrounding buildings and balcony motif in relation to the window.”

The balcony becomes an extension of the apartment, at the same time providing privacy, which residents quickly appreciated using it for recreation or storage and that became the feature of the otherwise unexciting façade. 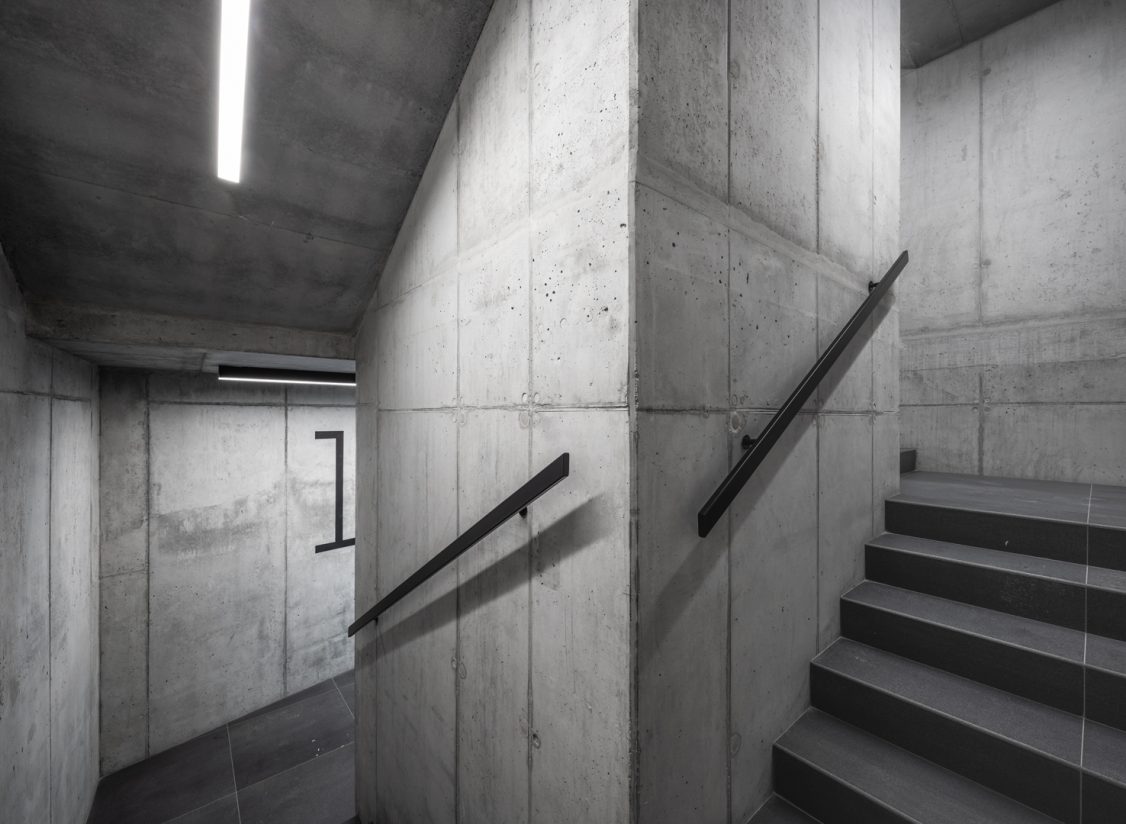 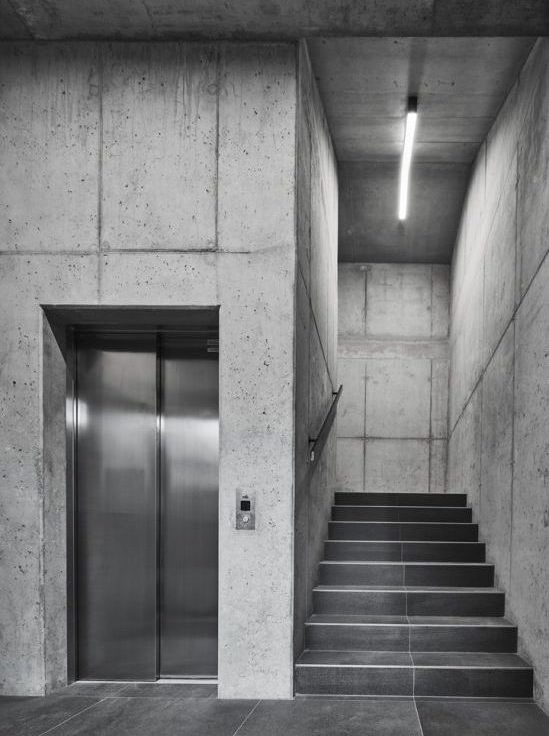 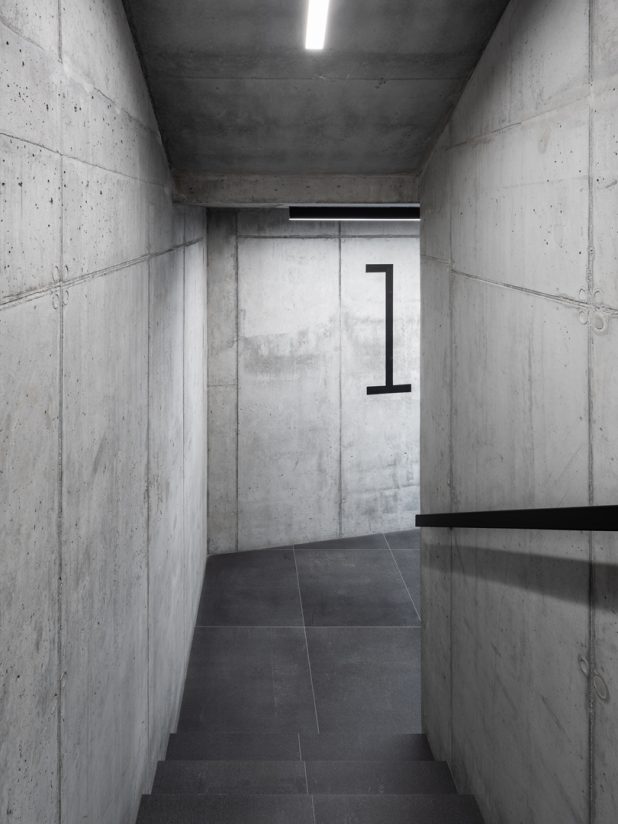 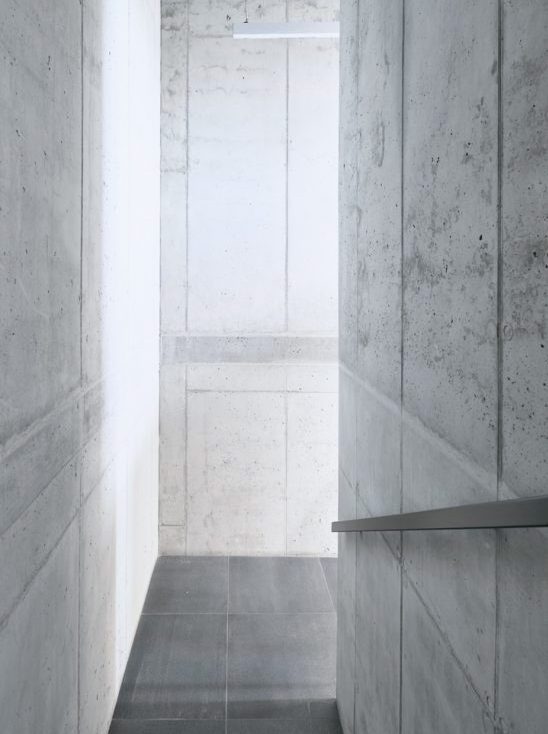 “Thanks to the full balustrades, the building maintains consistency, and the objects kept on the balconies do not disfigure the area.Full balustrade covers the exit and hence all the windows appear square,” explains the architect.

The balconies were arranged in the same direction on all facades, with the position shifted in relation to the irregular outline of the building, creating a characteristic silhouette, which is the dominant feature at the end of the quarter. 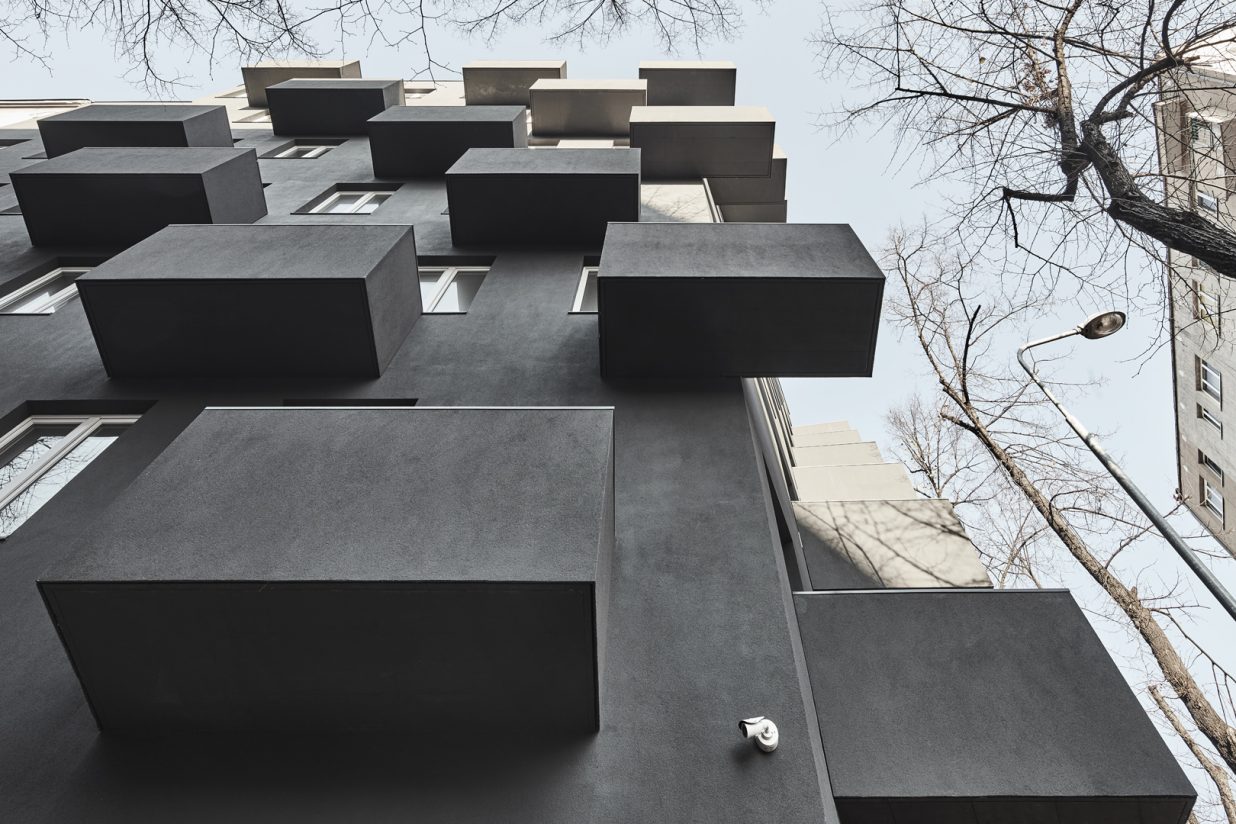 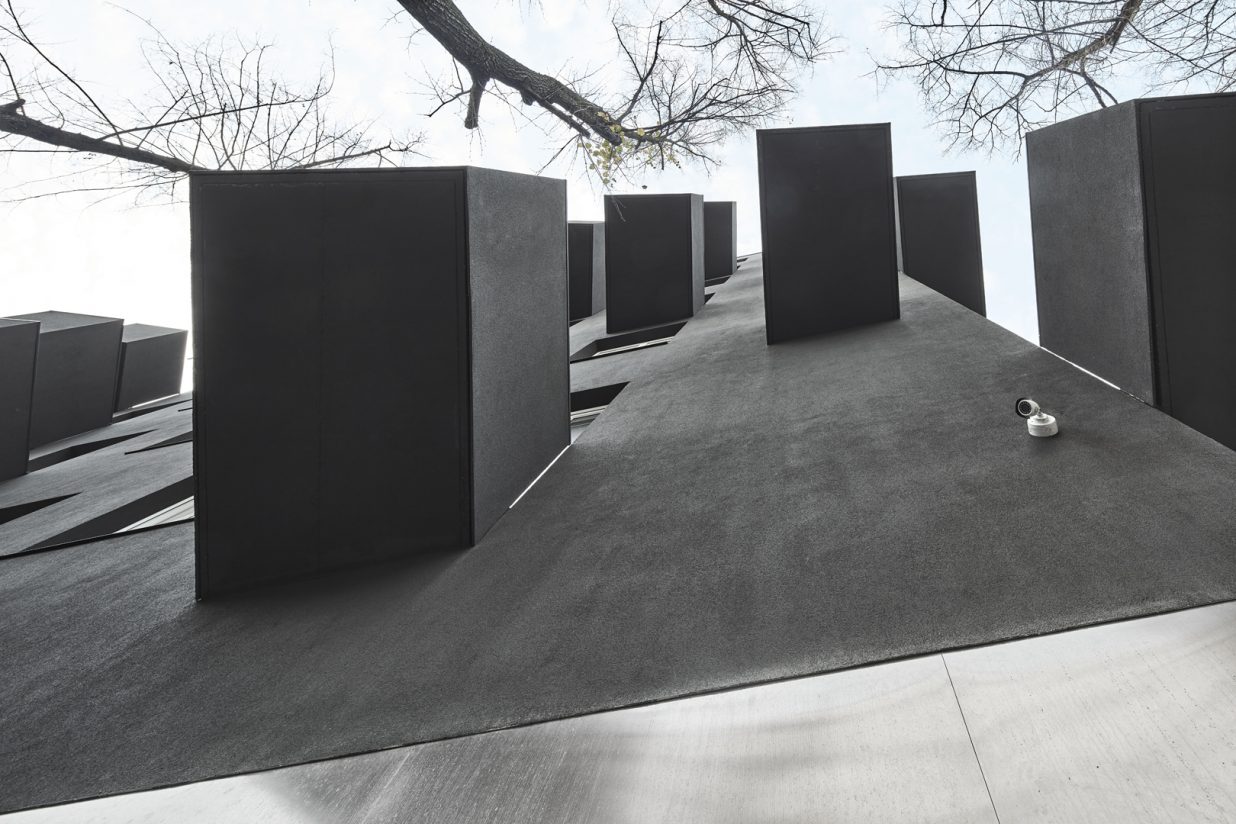 While the balconies do form the façade feature, it is much more than the form. “The characteristic composition of balconies is not only a formal treatment. On the eastern facade, balconies adjoin the wall with the shorter side and sticks out far beyond the building outline to catch much more of the southern light.”

Another reference to the surroundings is the plinth motif taken from the neighboring buildings, which stretches across the entire frontage. On the other side, where Unikato borders with a free-standing villa, the plinth becomes a fence, referring to the fence surrounding the villa. 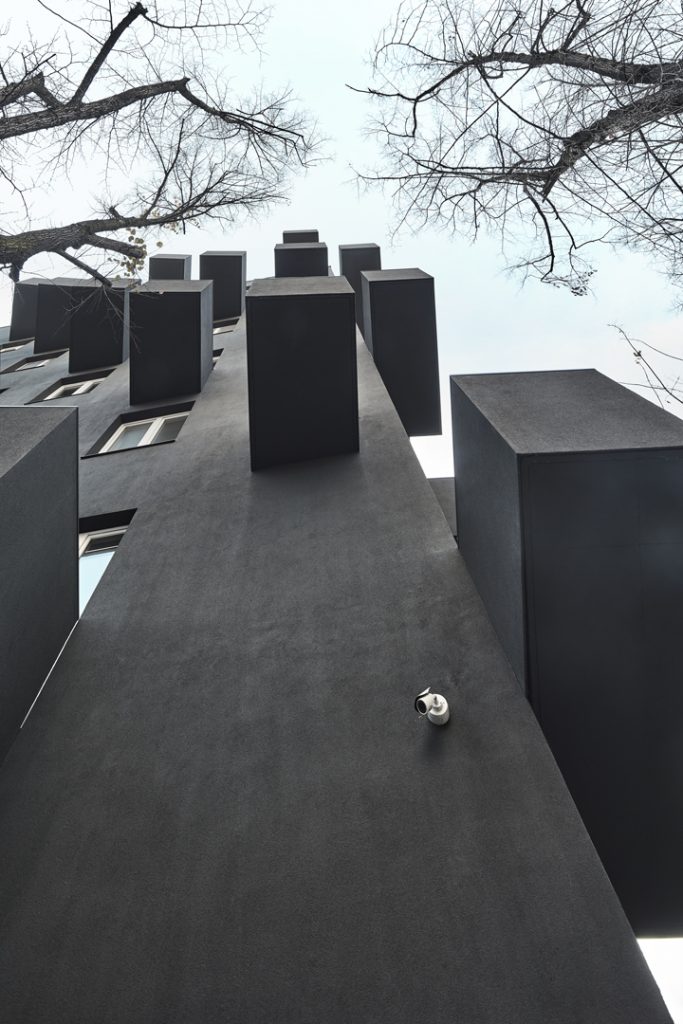 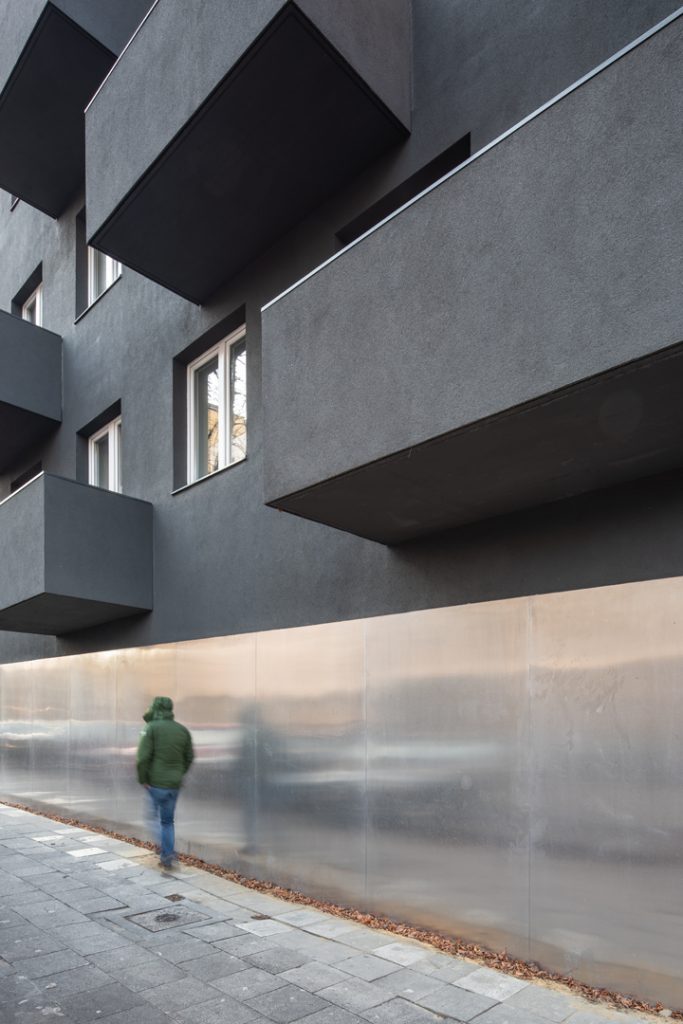 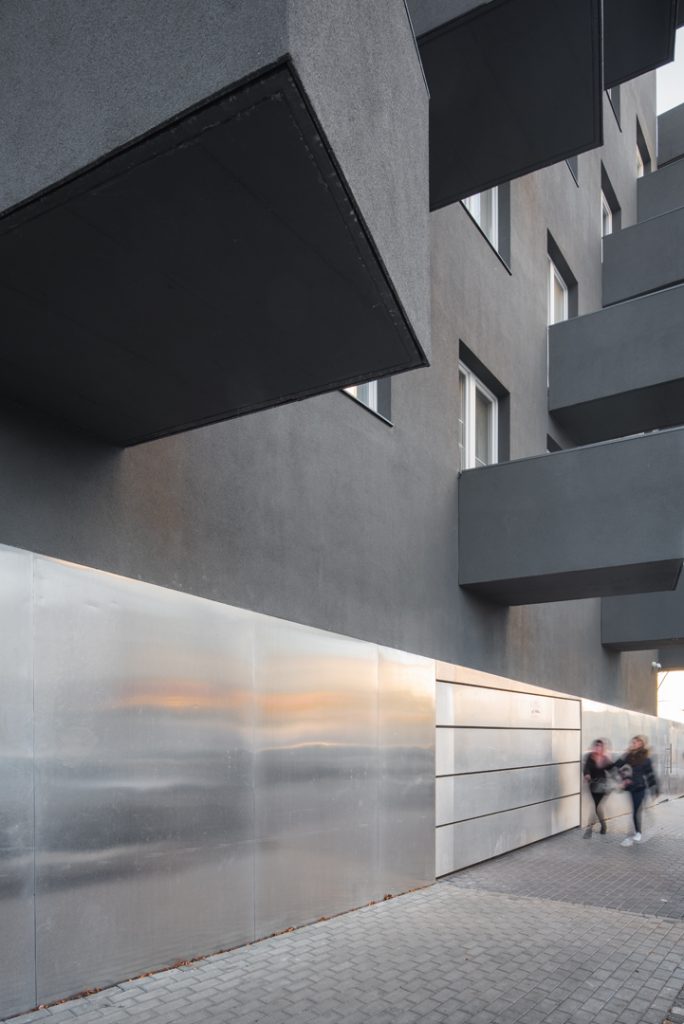 The balconies hanging above the sidewalk make the building very dynamic, but as the distance from the facade increases, it becomes more subdued, mildly fitting into the context.

Only economical, easy to implement solutions were at stake in the construction of the building – a monolithic skeletal structure filled with a wall of ceramic hollow bricks, a raw reinforced concrete staircase, white plastic windows and plaster on the façade, explains the architect. 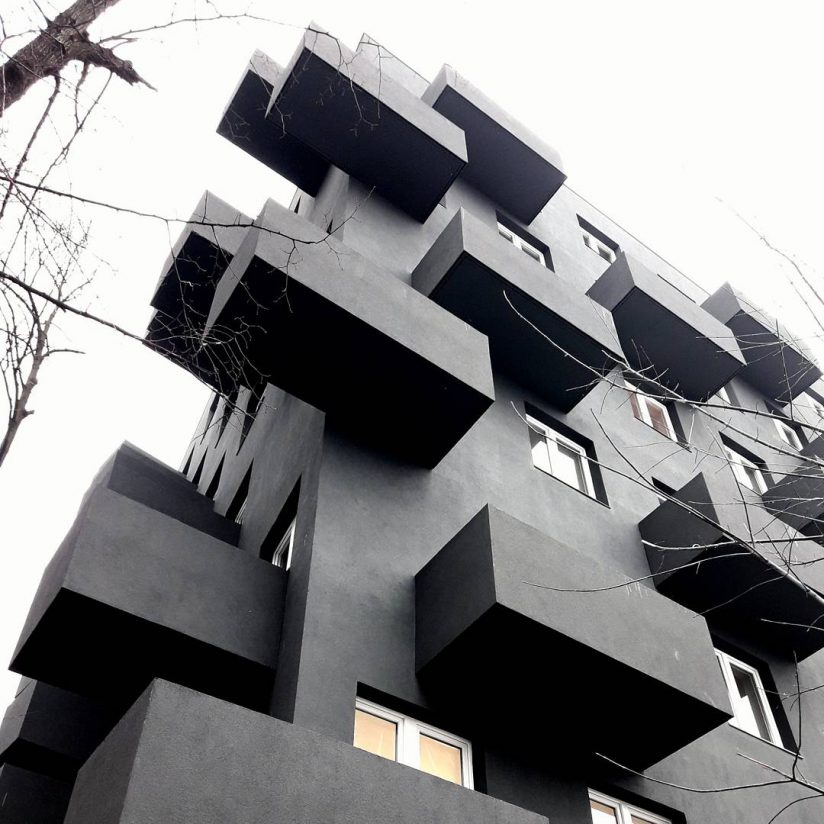 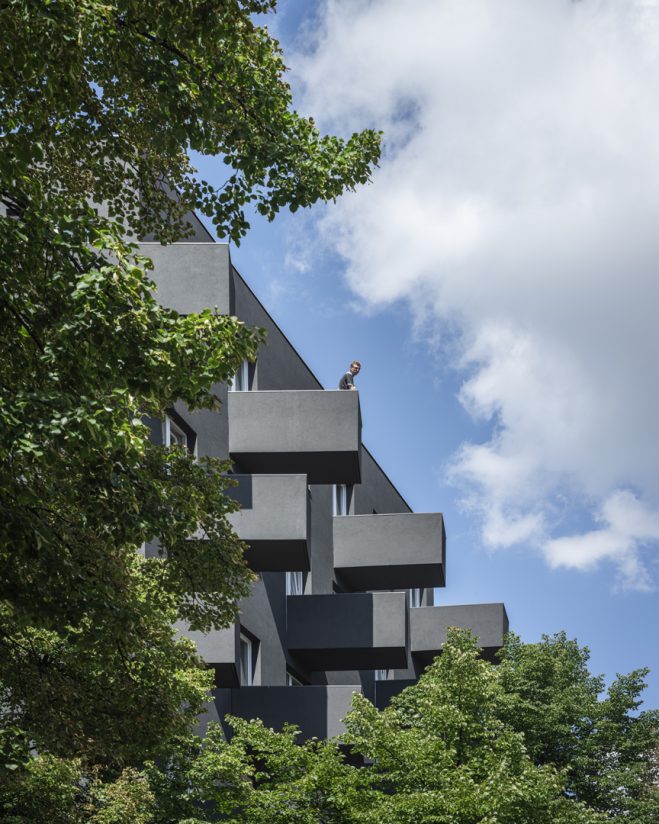 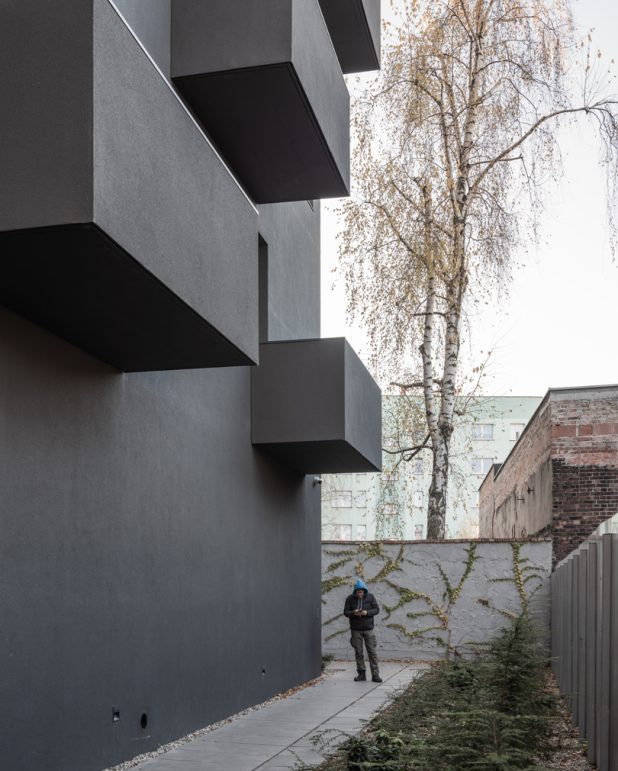 Something that seemed a disadvantage was turned into an asset of the project, because the white of windows in combination with the dark finish of the facade became a recognizable element of the building.The balconies were made a monolithic construction. Their steel barriers clad with cement panels and covered with plaster. The base of the building is finished with cheap aluminum sheet, which is gradually tarnished. The building is equipped with installations minimising energy consumption and is powered from an ecological municipal network. Despite the limited budget, the roof was designed as green – it absorbs dust and smog and improves the micro climate. 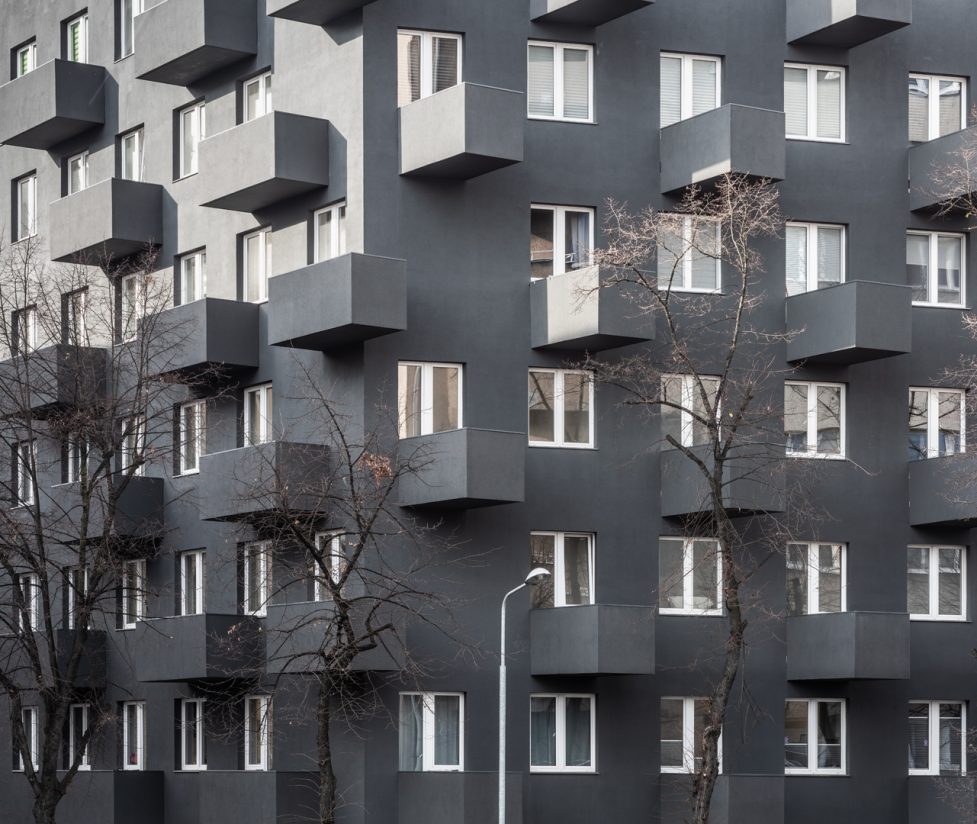 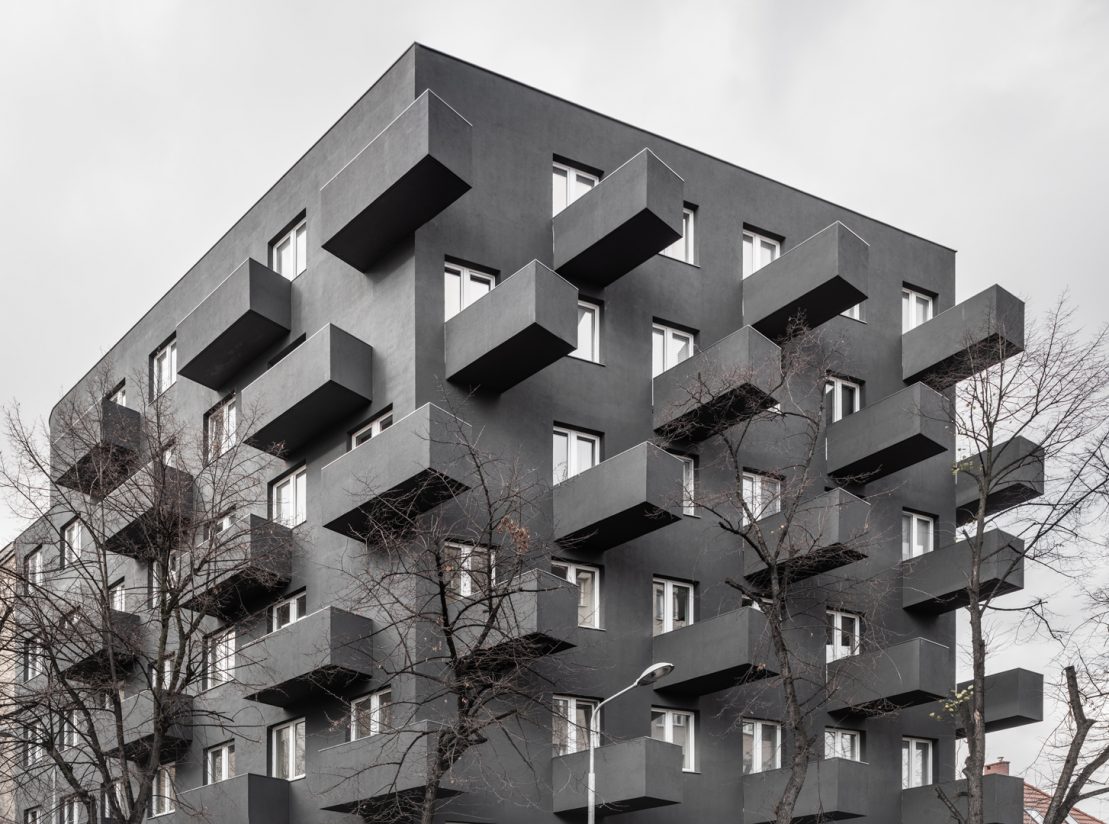