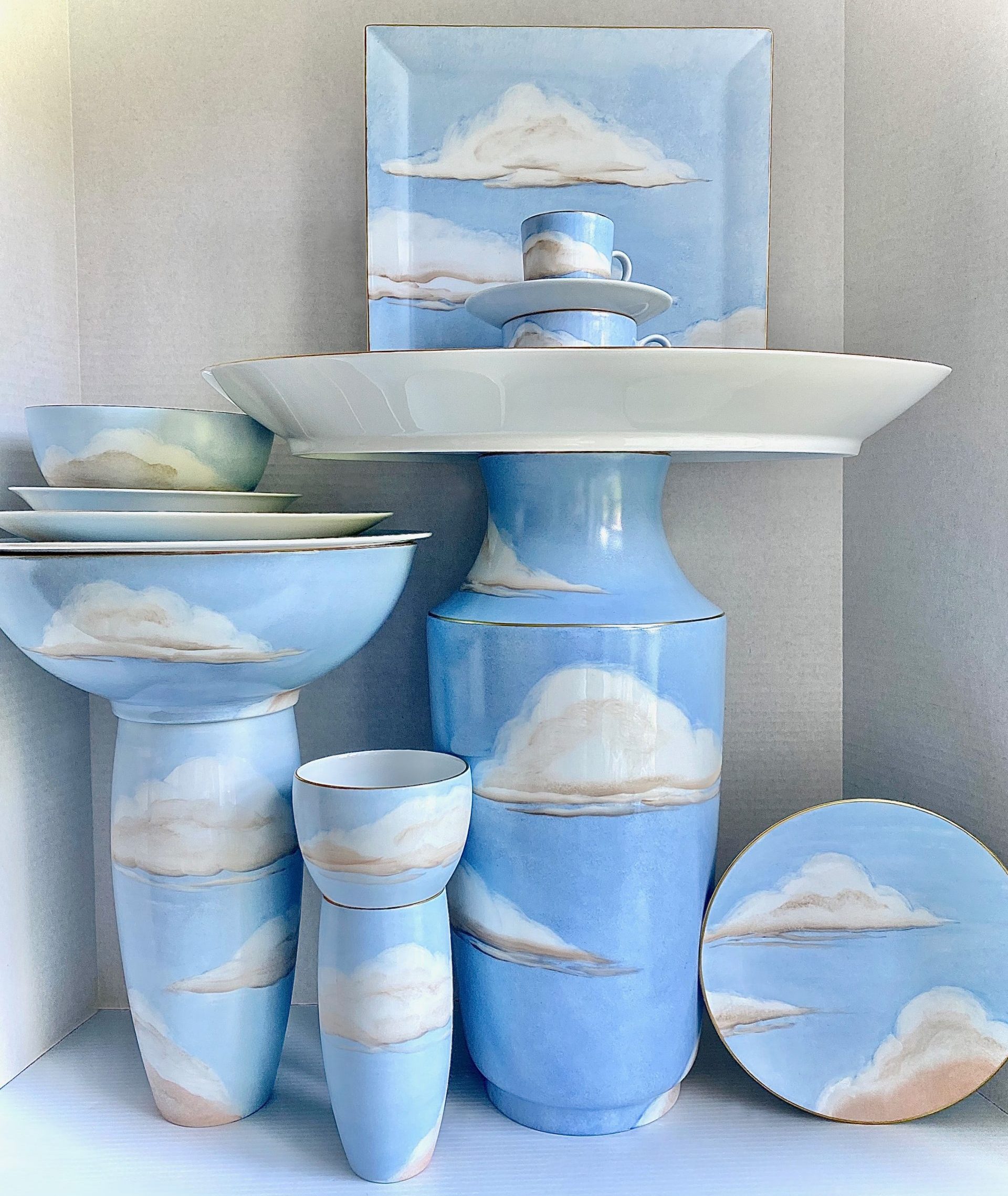 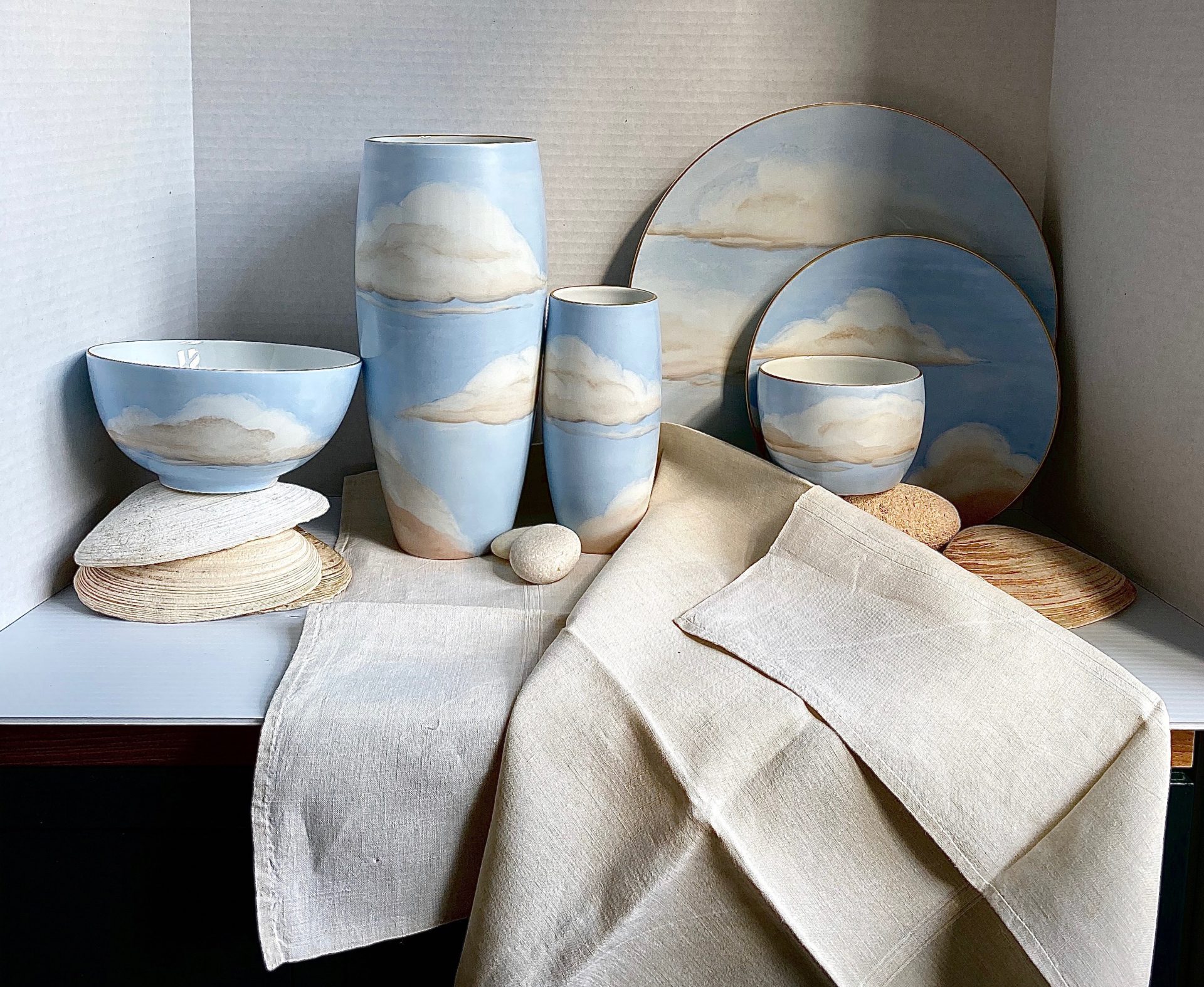 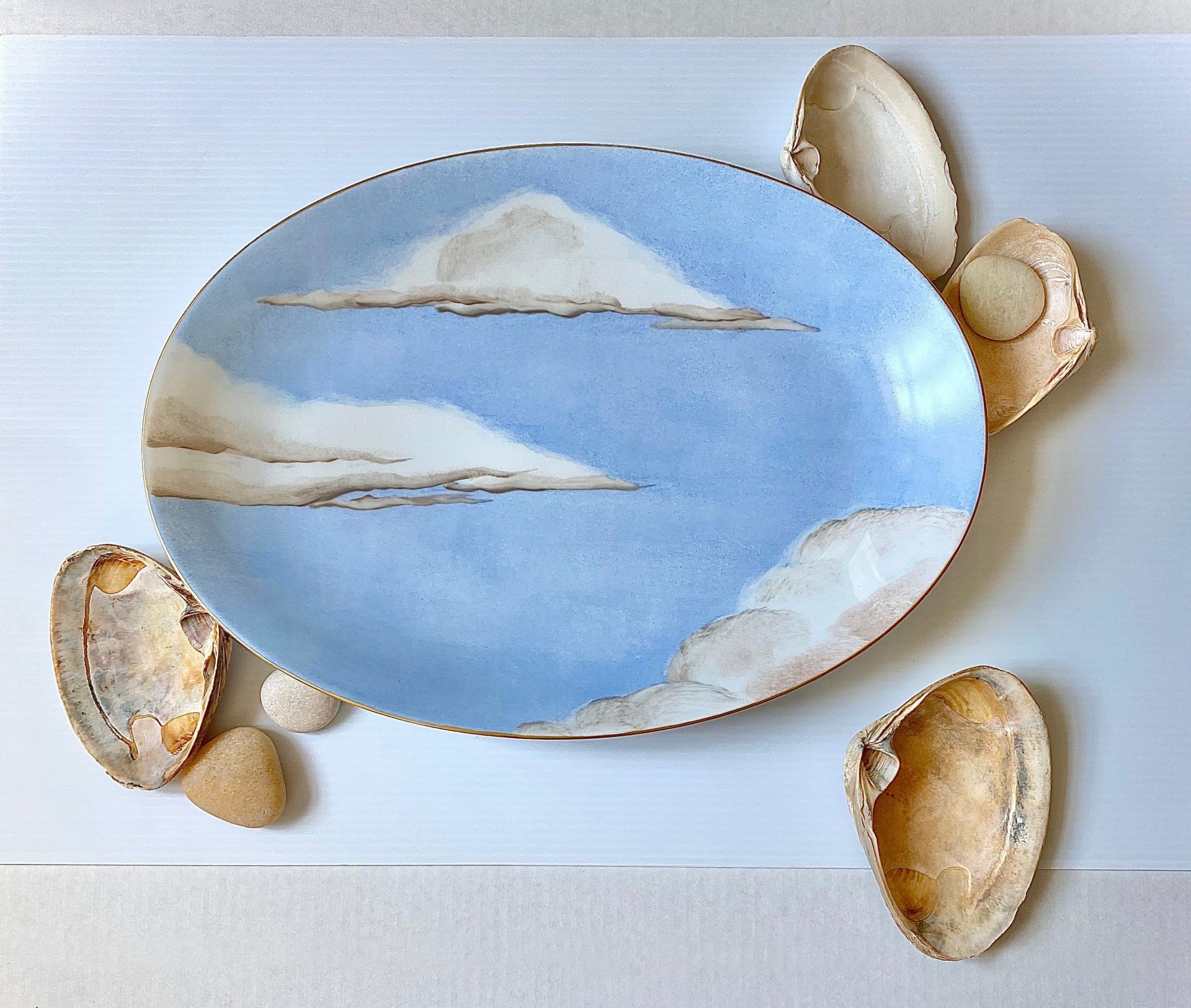 Reflecting European architecture and design history’s influence on Hansen as an unfaltering source of inspiration, the Ciels Bleus collection finds its roots in the hand-painted ornamented ceilings characteristic of Renaissance and Baroque edifices. Mirroring an architectural and artistic element onto his work, thereby replicating the illusion of the outside captured on the inside, Hansen endows the pieces with an atmospheric depth and ethereal sense of spirituality, exuding a holistic and essential relation to nature. In choosing the theme of the blue sky, Hansen builds on the motif’s numerous historical undertones and interpretations – the sky as boundless organic space, its representation as evocative of a contemplative and meditative state often referenced in religious history.

Crafted by hand in Limoges, France, by the region’s esteemed craftsmen, the porcelain used for the collection materializes the represented lightness and sense of fragility. Bestowing a modern interpretation of this historical theme, Marie Daâge renders Hansen’s design onto the porcelain through quick watercolor-like brush strokes, yielding an atmospheric airiness and fluidity characteristic to her work. 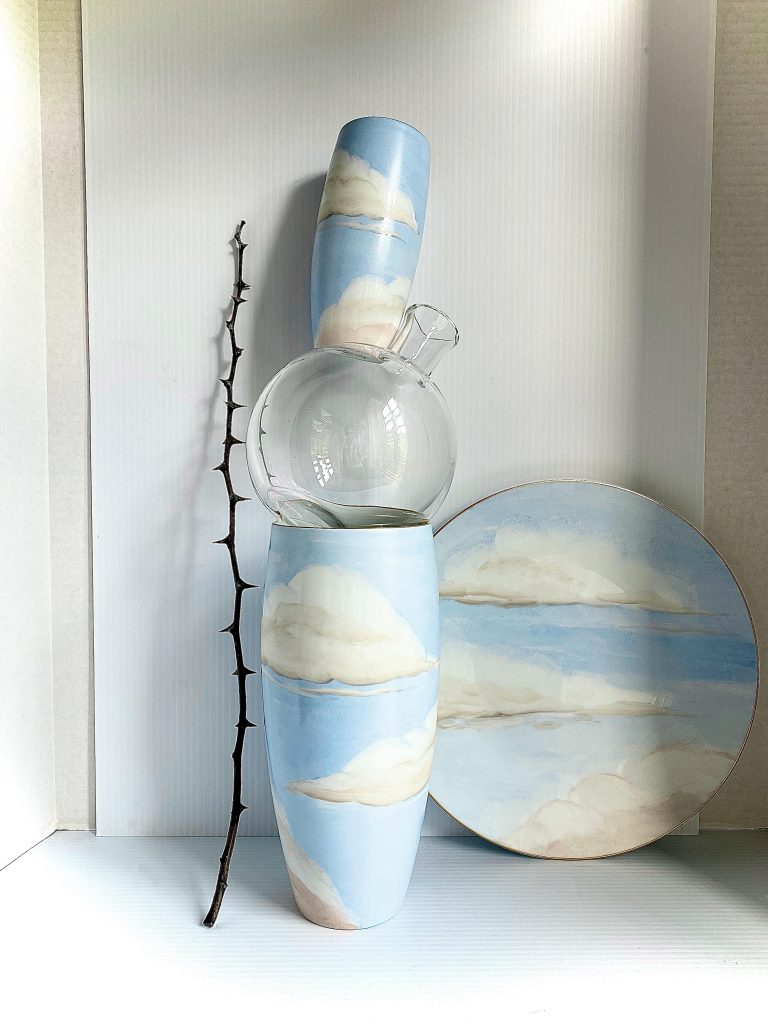 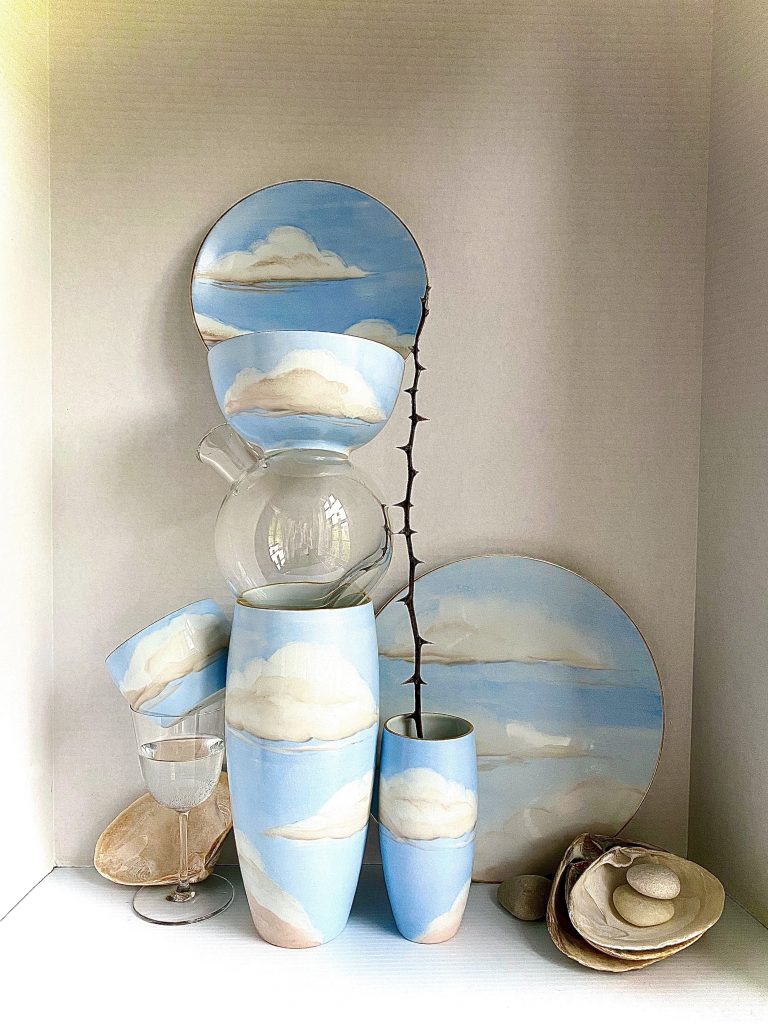 Influenced by the Baroque grandeur of her native Austria, Marie Daâge’s color compositions build on a complex palette, the result of several hour-long hand-mixing processes involving sometimes up to 10 powders to attain the right hue. Working with select painters, she trains them to translate both Hansen’s and her design aesthetic onto each piece. The artisans’ skilled brushwork plays on a distinct pressure and flourish: rather than filling in color to pattern lines, the fluidity, movement, and seeming translucence of the figures is the result of light, quick strokes, calling for a very precise hand.

Describing his collaboration with Marie Daâge, Jonathan Hansen explains: “Both the theme of the blue sky and my choice to work with Marie Daâge and her reputed Limoges porcelain craftsmen acquire a particular significance today. A much-needed lightheartedness, serenity, and playfulness emanate from the Ciels Bleus designs, one that radiates beyond the objects and onto the very setting in which they are presented. By embracing the use of porcelain, working hand-in-hand on this year-long creative process, Marie Daâge and I manifest our shared deference and respect for the time-honored craftsmanship techniques carried on by the Limoges artisans, ones that are all-the-more essential to preserve today. 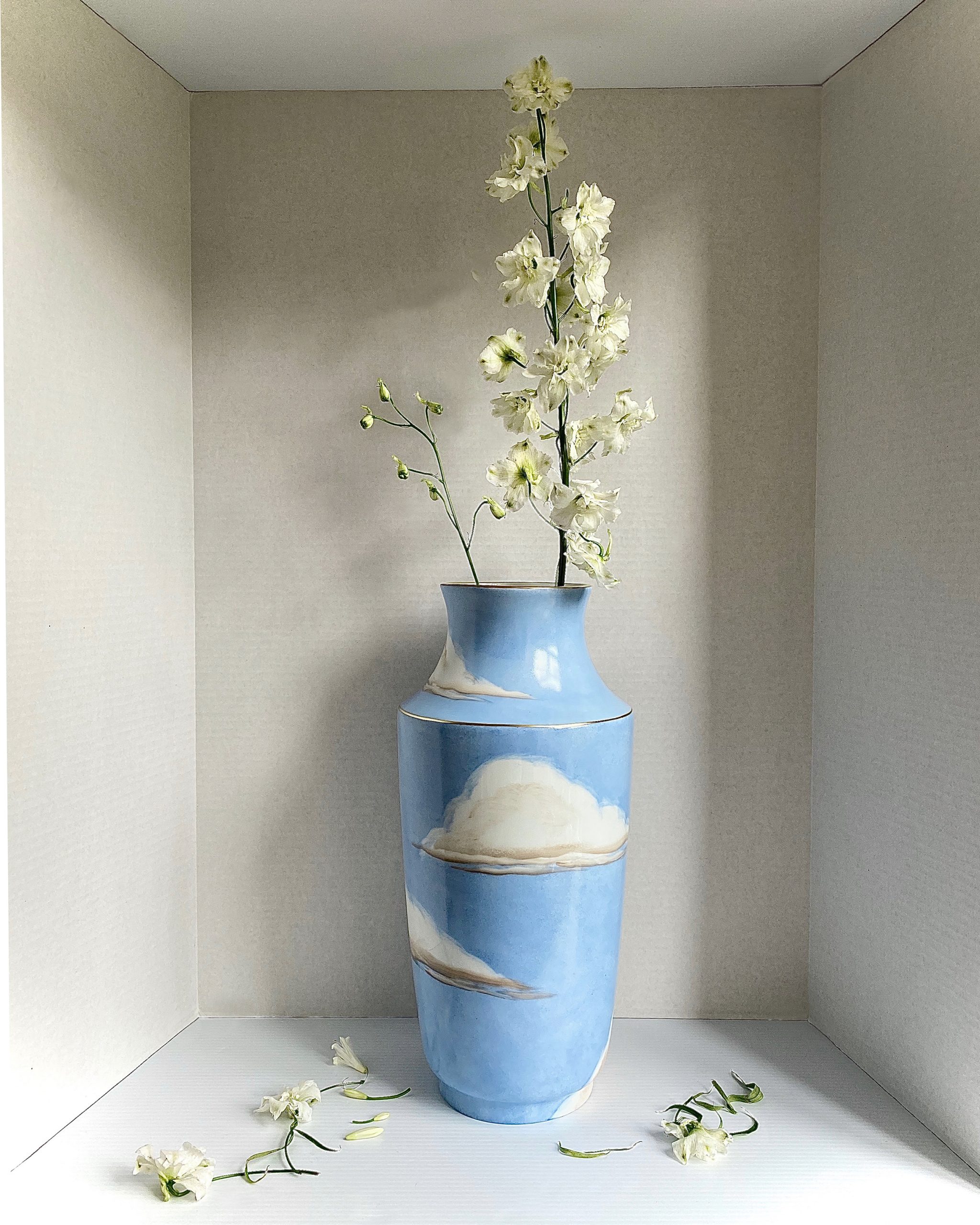 He says that the current situation of lockdown has brought a new perspective to his designs, “The design process has not changed for me during this season but the focus/themes of the design work have been refined. The Ciels Bleus collection and the theme of blue skies became even more relevant and powerful given the fact that so many of us are spending so much time indoors. Bringing the outside expansive sky indoors through the collection has resonated with so many people.”

Artstry Designs “Buy me a Coffee”

A team of young architects design an open, colorful office interiors that make for a relaxed workspace 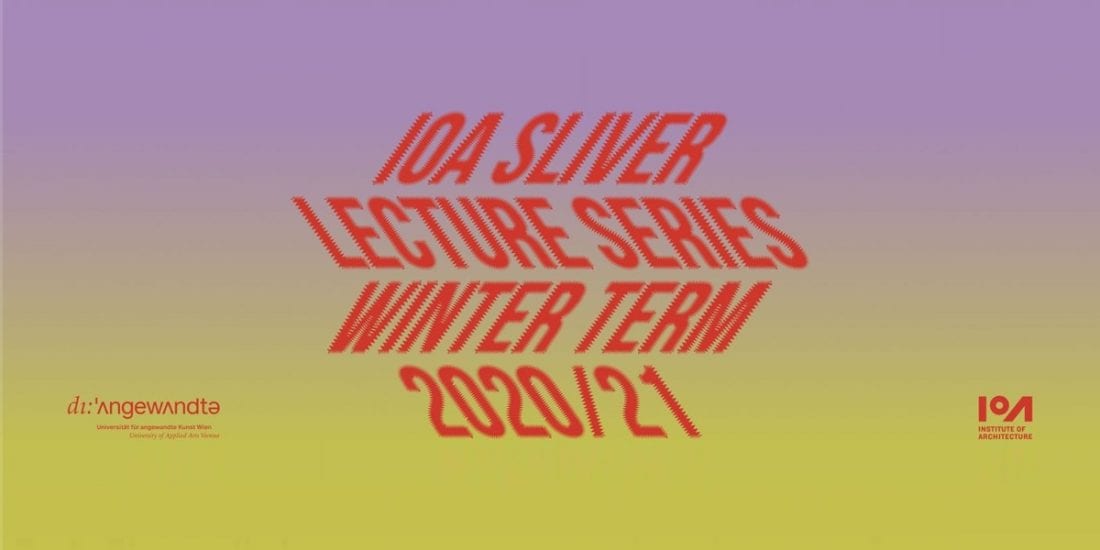