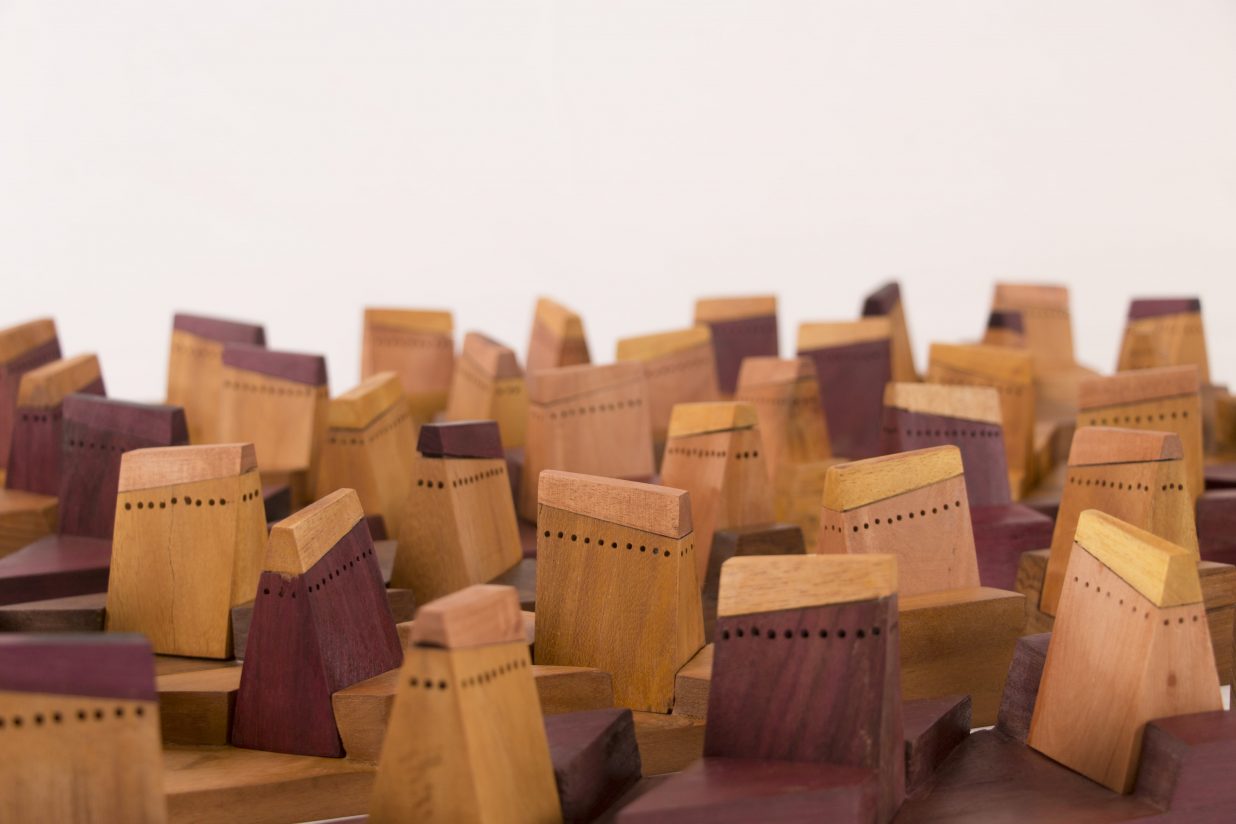 SM.LL is a design practice based in Kerala co-founded by Indian architects Minu Zacharia and Jayaprakash V.N that creates meditated designs for everyday use. SM.LL sidesteps the high-tech and futuristic as it draws strength from the immediate context and readily available resources with an intent to deliver for the present. By Amiya Hisham 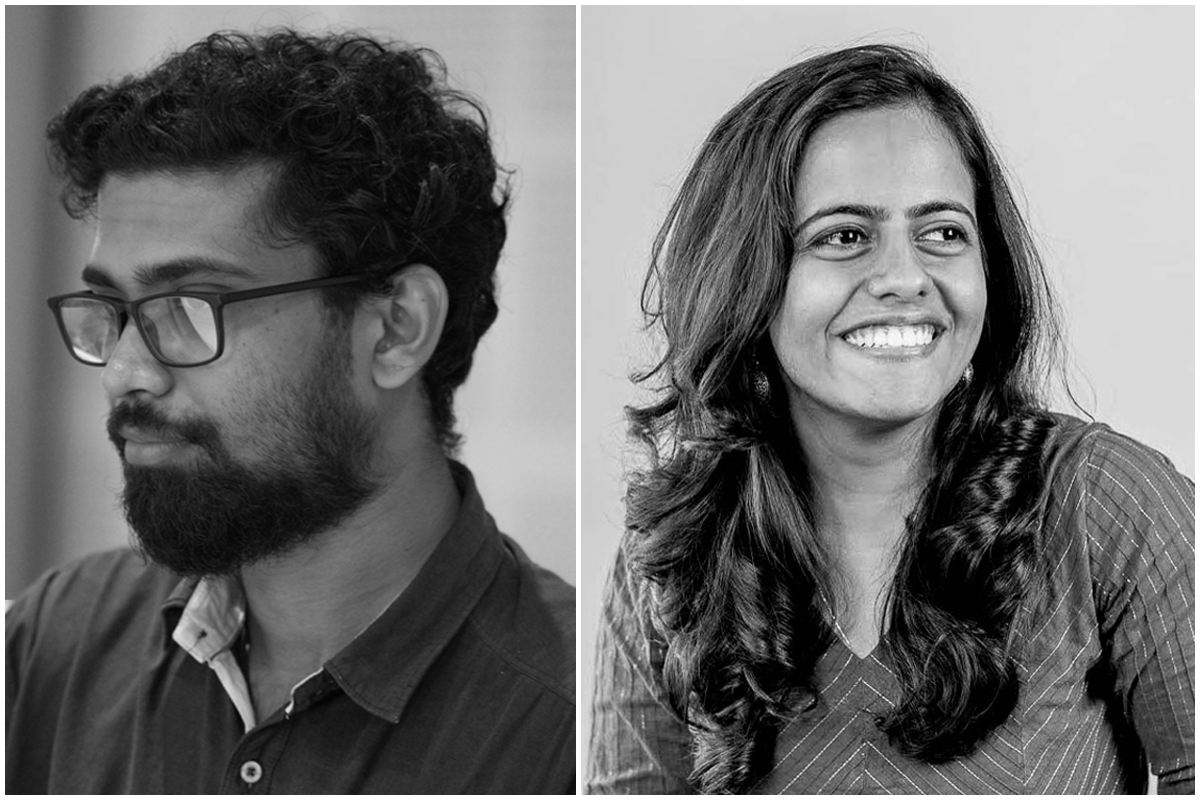 “We learn and unlearn, think and rethink our designs on loop until we generate a process for the problem at hand. So, our pieces are encapsulated tales in its conception.”

The founders of SM.LL Jayaprakash and Minu are both architects by profession but have forayed into a broader field of design-driven by conceptual thinking.

Minu holds a Master’s Degree from CEPT, Ahmedabad, and has worked in the Middle East and Pune before joining the College of Architecture Trivandrum(CAT), Kerala. She is the recipient of the Stapathi Samman 2013 for her excellence in Architecture Design Studies. Jayaprakash graduated from MES School of Architecture, and has worked with CnT Architects, Bangalore, and has been an academician at CAT since 2014. With the seeds of carpentry sown by his father, he has made steady strides in woodworking and product design. His previous works include the Relooped Chair, awarded second place at the TRENDZ Excellence Award for Architecture & Design, and Kalpavriksha for which he is a joint winner of Lexus design award 2019 with architect Anooja Jayalakshmi. He was an official representative of India, as an interpreter for wood joinery expertise, at the International Euro Skills Competition, Budapest.

The duo built rapport while working together on architecture competitions and custom furniture for their friends, which eventually led to establishing S M . L L Design studio. They then began exploring products and furniture with strong conceptual narratives and worked with a layered approach of research, prototyping, and intuitive design processes. “We learn and unlearn, think and rethink our designs on loop until we generate a process for the problem at hand. So, our pieces are encapsulated tales in its conception,” they say.

The name SM.LL is far from casual, it describes the scale of designs it means to produce, and though ‘small’, the subjects they touch upon are visceral and emotional. “Every whole is made of parts and these parts, in turn, have theirs. SM.LL tries to unify these ephemeral infinite parts by imparting a conceptual expression to the whole”. The stylisation of the name, with the dot, is intentional as well: the dot or point signifies “a curiosity that causes a gentle pause (.) in the pursuit of beauty.”

SM.LL is of the view that design must emerge at the intersection of ecological, economic, and social cycles. Thus, through practice, they advocate the use of local materials and rebuilding local craft bases. Wood, in particular, is a material Sm.ll work closely with. 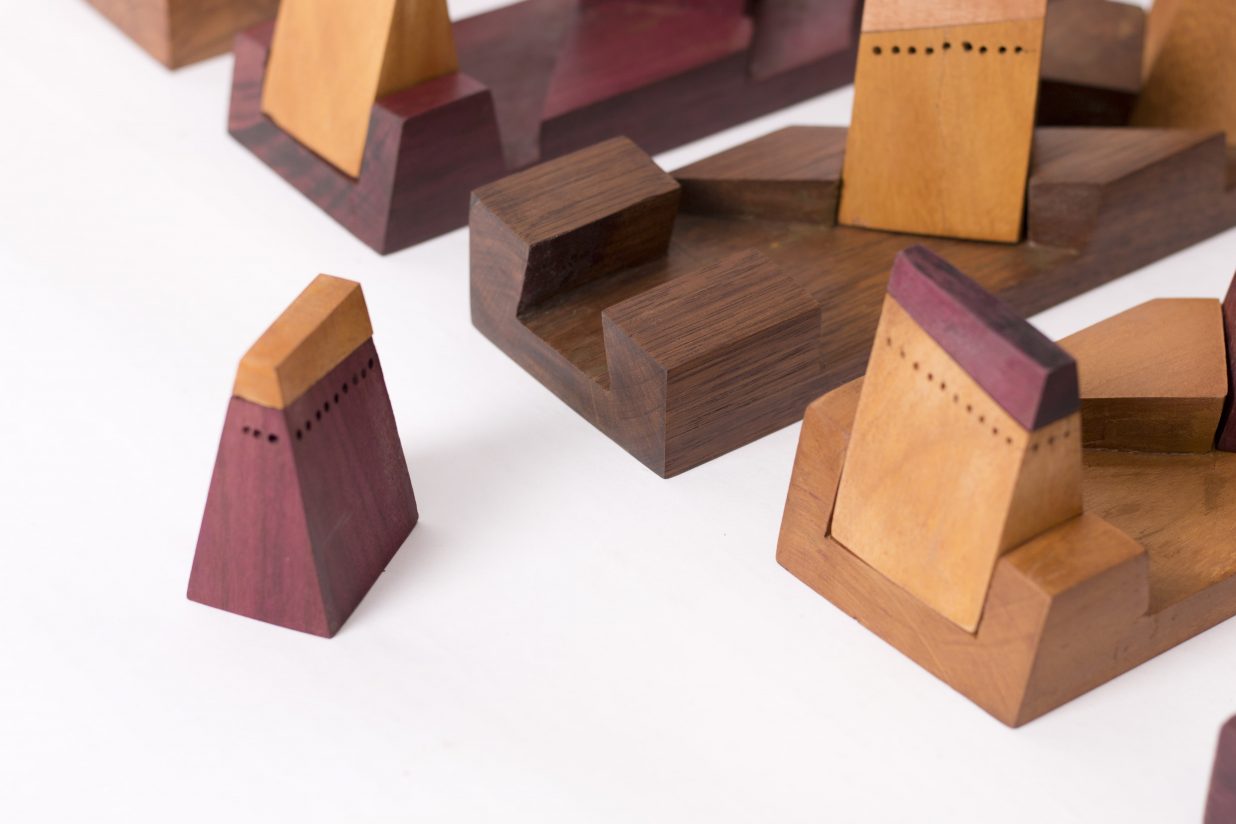 “..  Wood speaks about the history of Kerala in its most profound form Thachu Sasthram [a school of thought of timber construction native to Kerala], characterized by great skill in creating humblest objects to, furniture and buildings. Our designs pay homage to this historical humility in design while blending in modern materials as well, to narrate our tales.”

Objects made at SM.LL always begins with a question and they necessarily wander into the metaphysical – every cut and groove carries delight, purpose, and meaning. Every piece is premeditated work, layered with meanings that may not often be visible to the consumer of the product but satisfies the ethos, pathos, and logos of the design process. 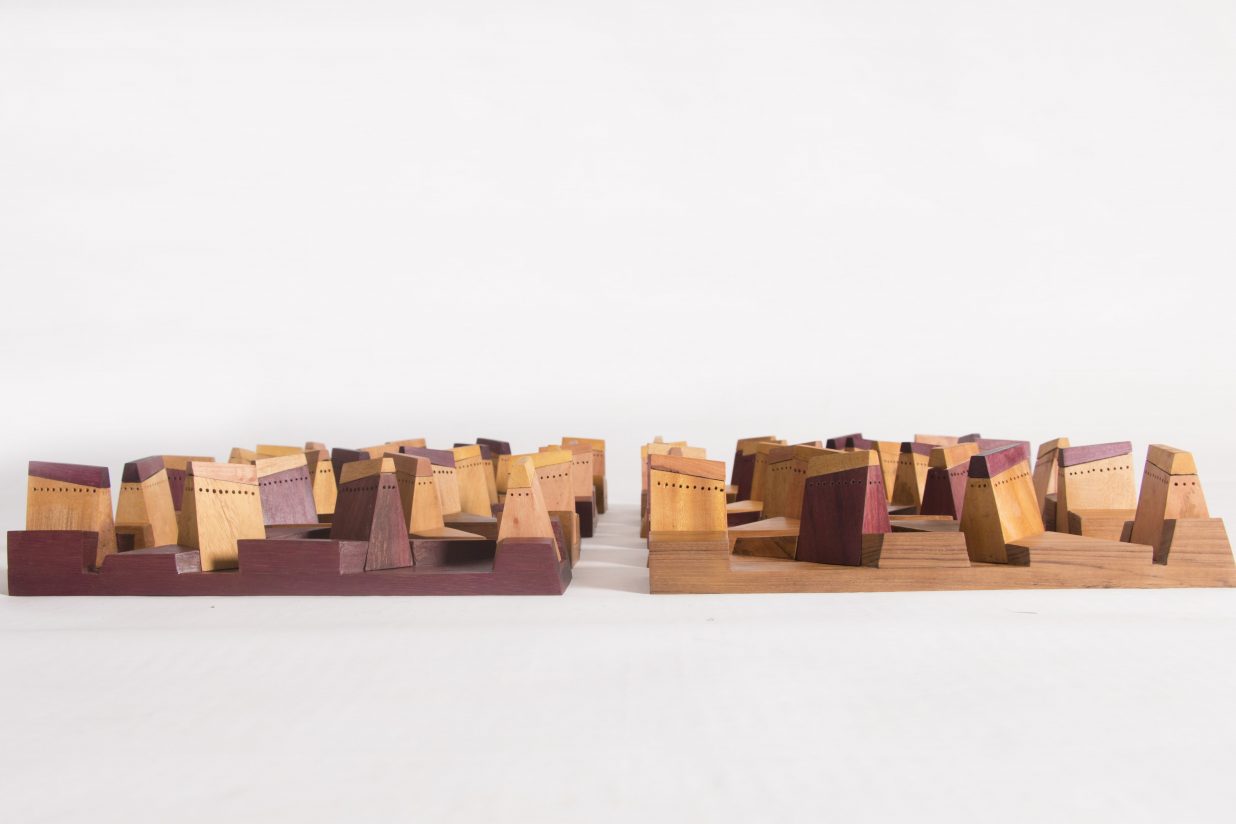 The end product is a manifest narrative that emerges from the logical and intuitive paths of concept iterations. Research and diagramming are essential parts of the process.

SCALE  looks intimately into two of their creations.

SPICETINS was a souvenir designed by SM.LL for the Metagreen Dimensions , an International Conference on Performance of Built Environment hosted by CAT annually. The design is a fresh take on a traditional gift article in Kerala and is based on some recurrent conceptual themes of their work such as the idea of ‘the container and the contained’ and ‘opaqueness.’ 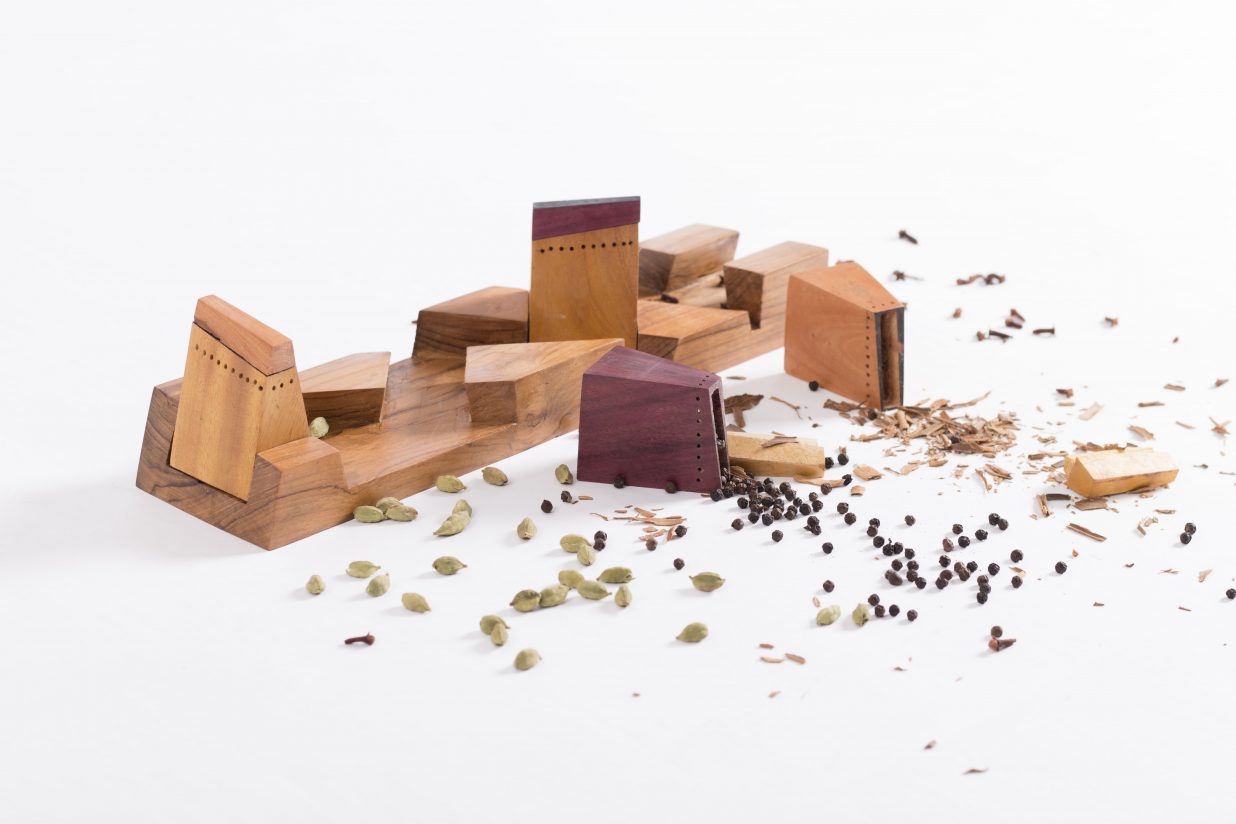 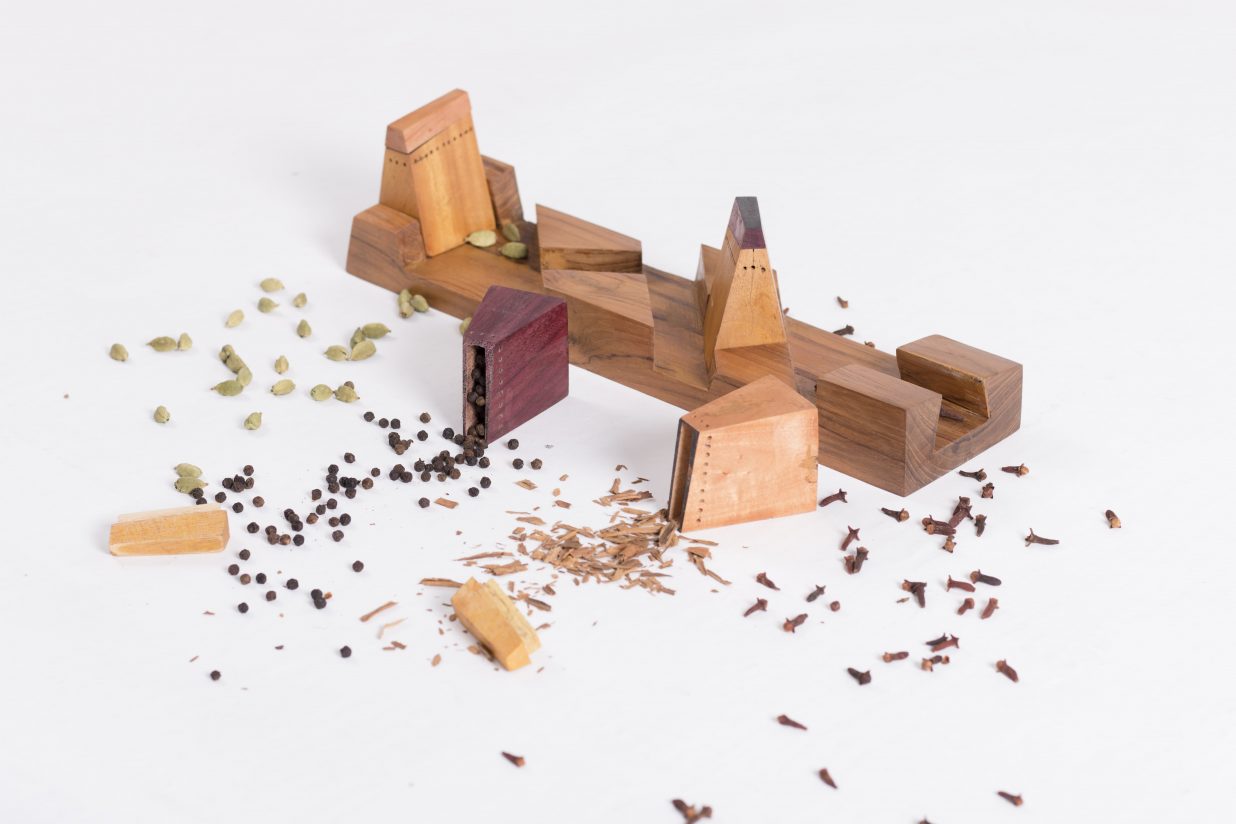 SM.LL describes SPICETINS as “ narratives of ‘transparent opaqueness’ and a ‘shape of aroma.” “The late 20th century Malayali’s memory of grandparents, their rugged kitchens and irreplaceable tastes are but aromas of our spices wafting along the house swallowing us in a caring craving for food.”

“SPICES are enchanted smells that invited conquests from across the seas, smells that contain tales of war and love, memories of history and culture.” 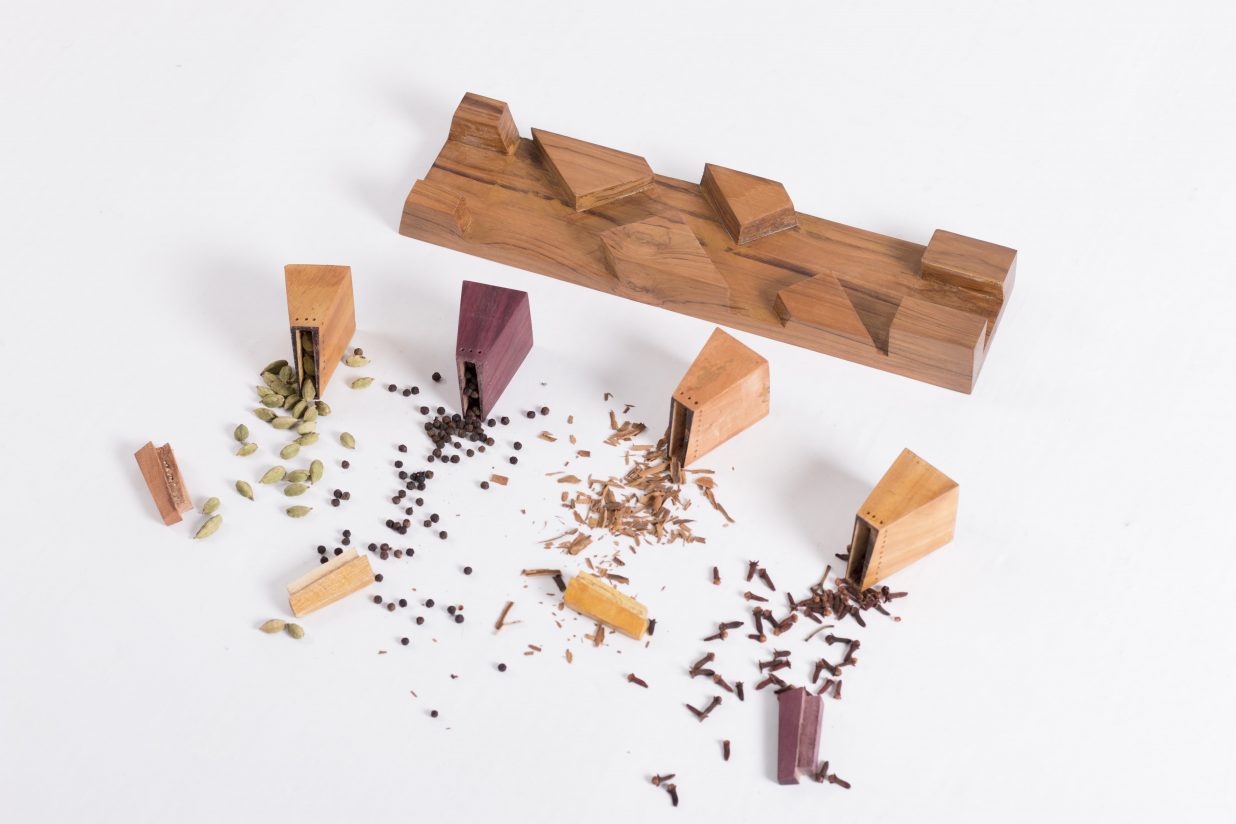 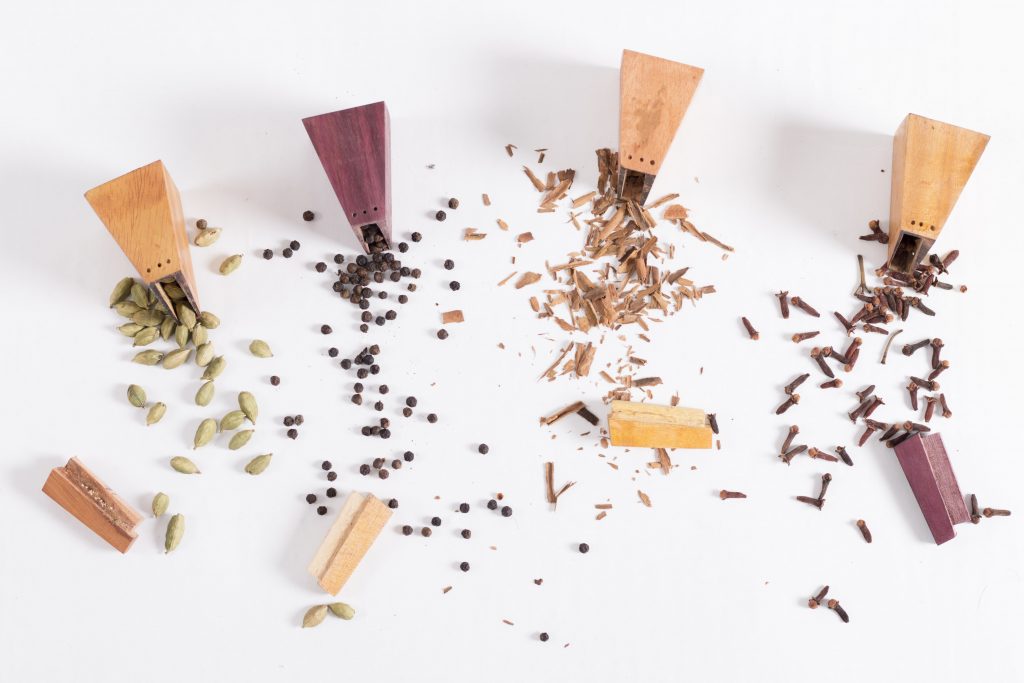 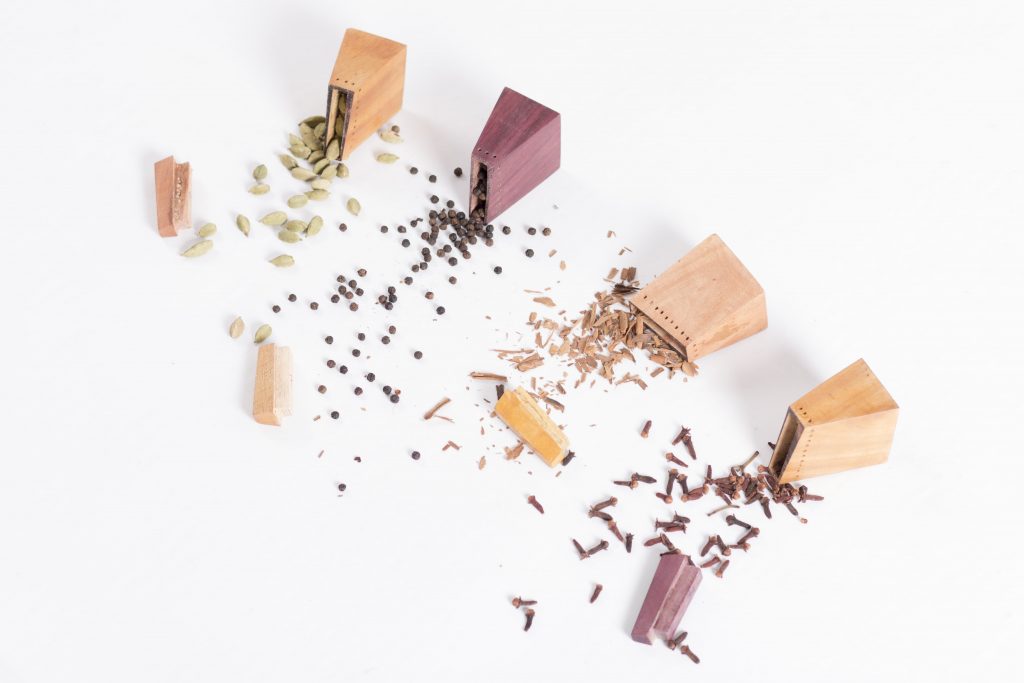 SM.LL transforms the simple spice box set into a multi-sensory artifact laden with metaphor. The ensemble appears dioramic of the Western Ghats of India renowned worldwide for its treasured spices. The design consists of coloured wooden spice tins shaped like wedges interlocked into a tray of crevasses, forming “a landscape of aroma.” 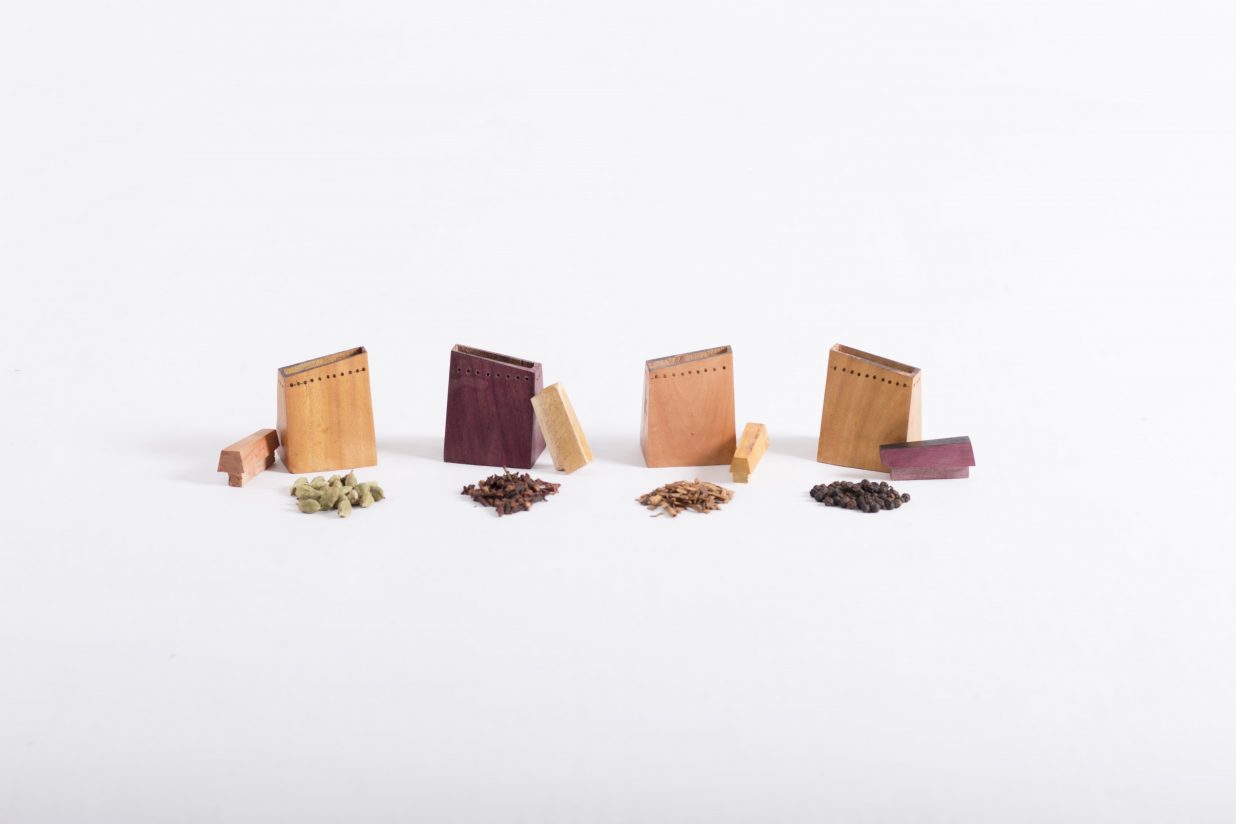 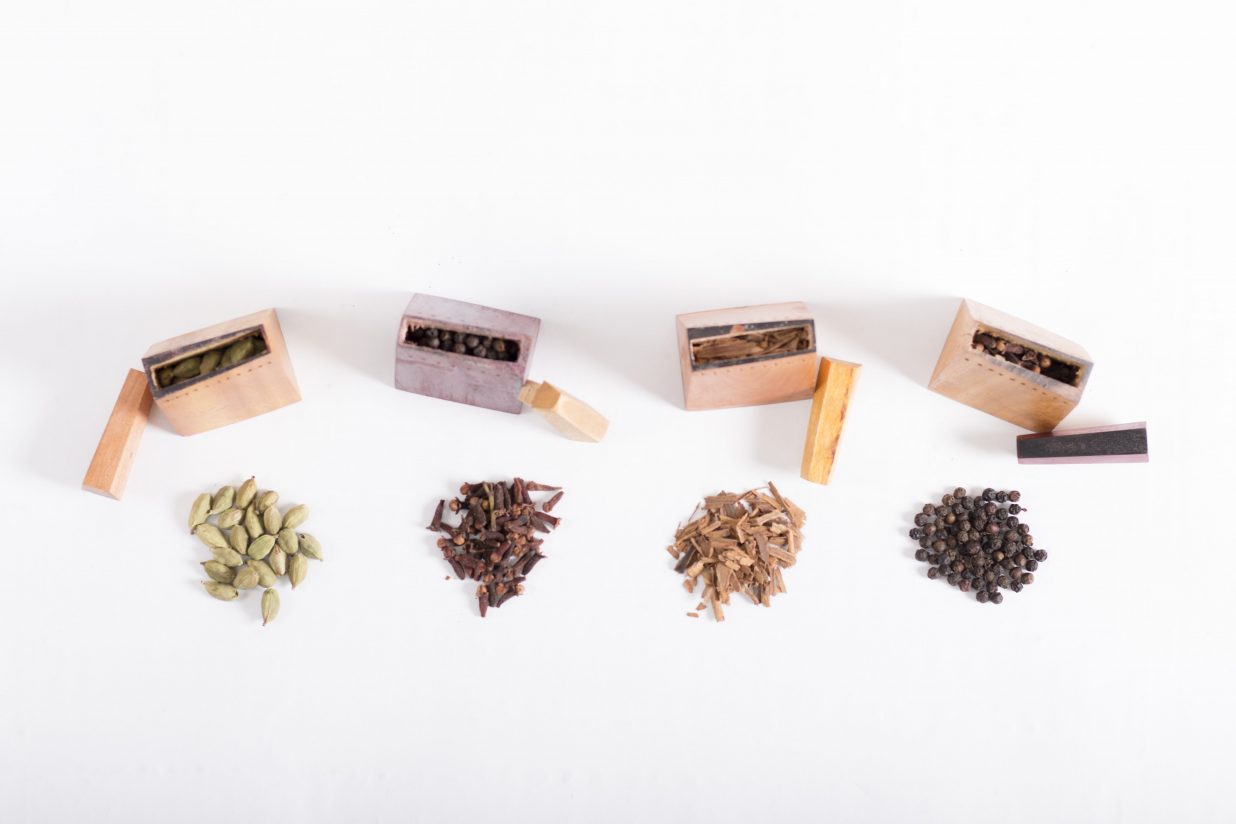 SPICETINS occupies a very pivotal space of the urban home which is capable of evoking memory and feelings and transforms “the spatial experience at the urban dinner table into a rural fiction,” according to the designers.

Originally a competition entry for the Kokuyo Design Award 2020, Pensive Love as the name suggests is an exploration of love, the subconscious self-love we allow ourselves, and the self-less love we bequeath to others. The product takes the form of a desktop accessory, consisting of a translucent box with 12 wooden capsules. The frosted box is an allegory of a suspended state of mind where time is frozen and the capsules themselves are coloured emotions. The compartments beneath the capsule contain rolls of coloured paper to record a handwritten note to memorialise a feeling, an event, a thing or a person. This note can be deposited in the respective capsule above it. In doing so love is enacted, either self-love or selfless love, and the passing of time is registered. 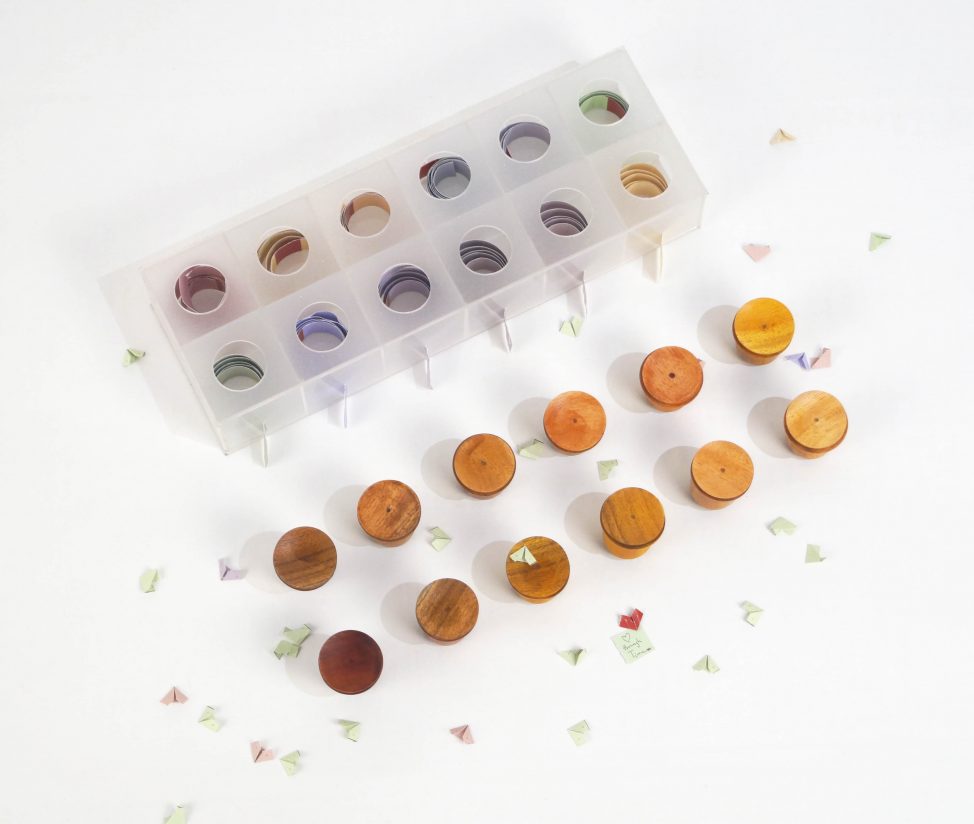 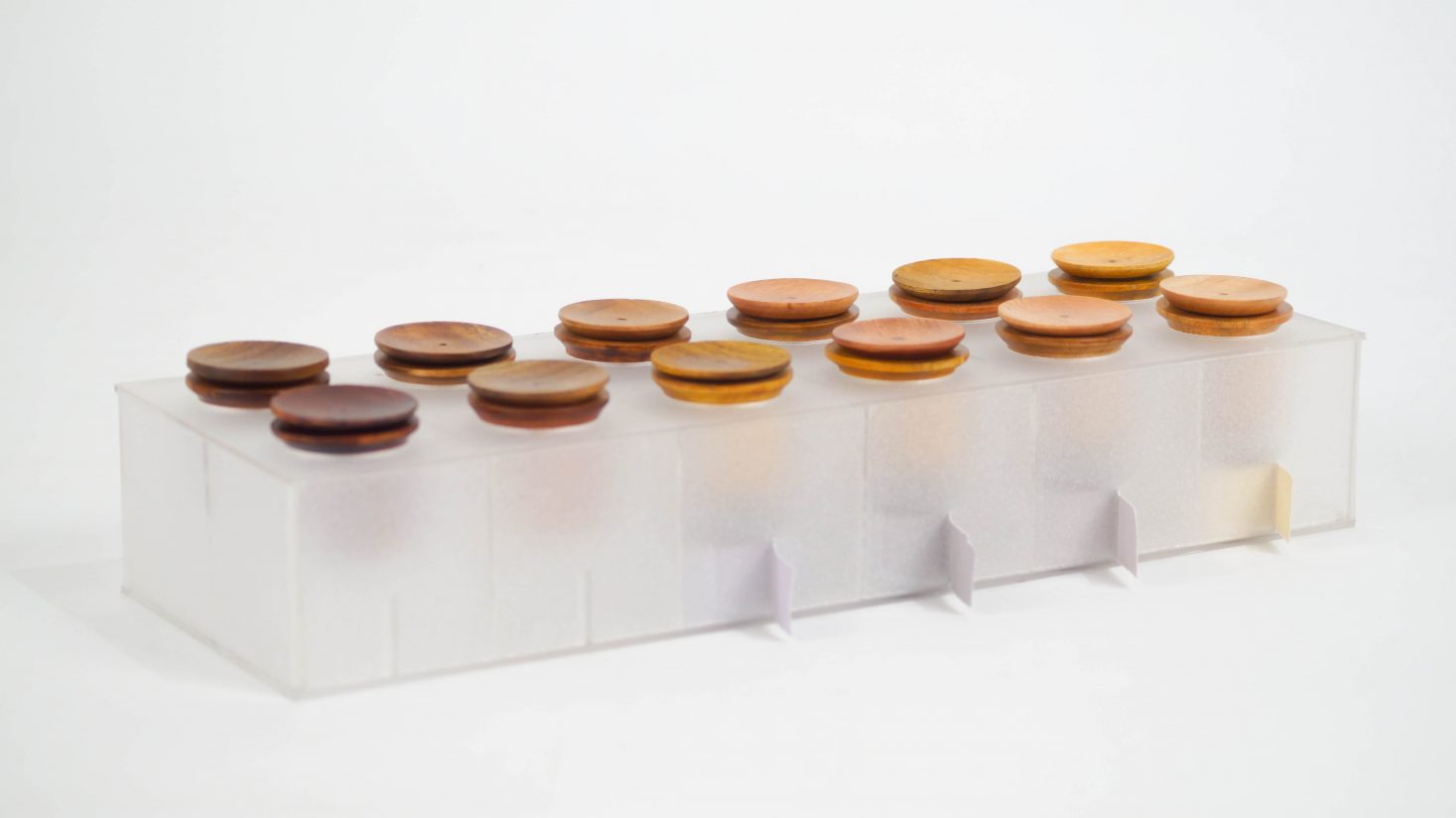 The love capsules when filled up, hold a sum of emotions, a gift to oneself, which has taken form with time and matures with it. When they depart from their frozen case as a gift for another, they leave a memory through their absence. 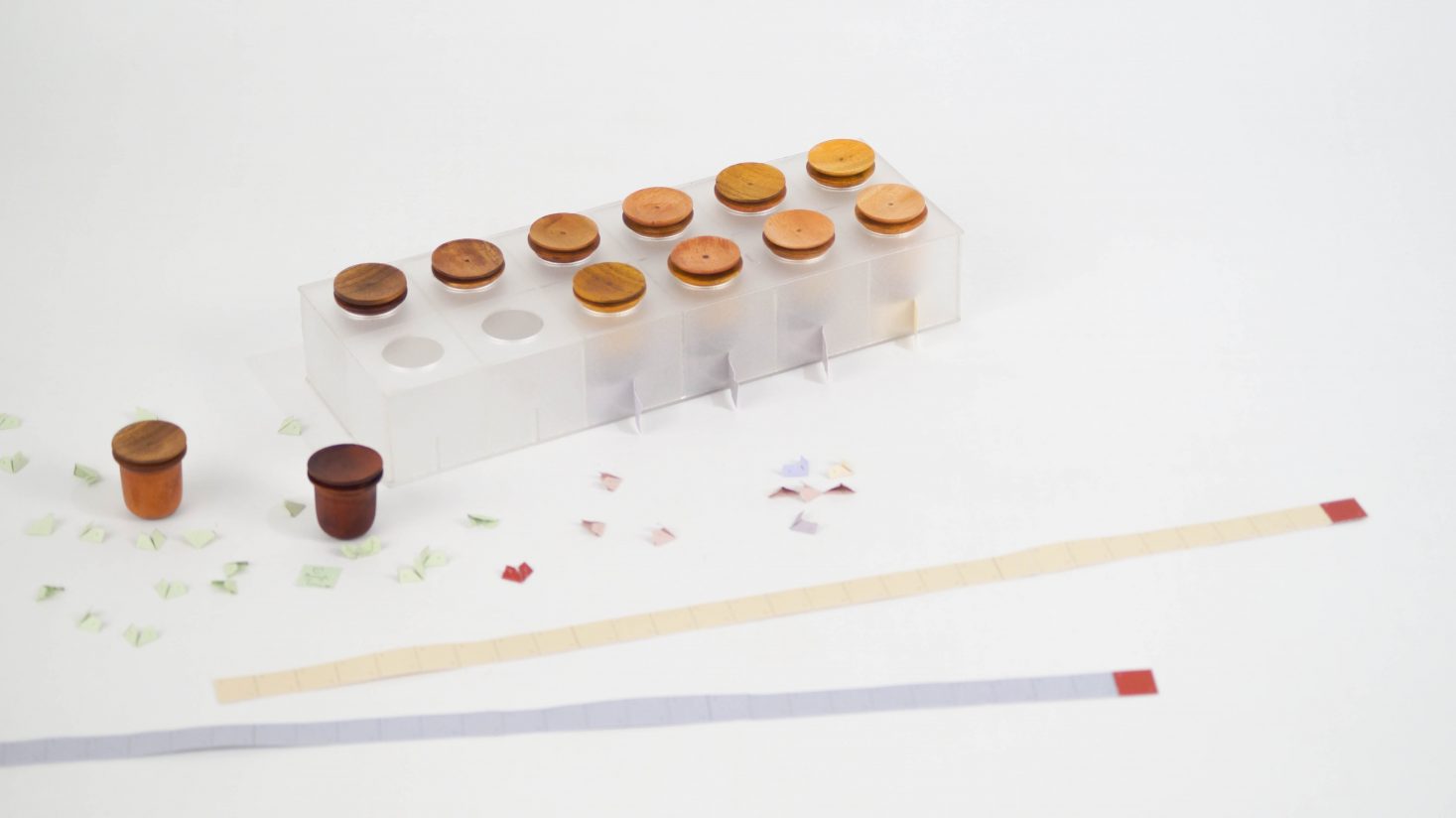 SM.LL is remarkable in the way it is in touch with human emotions, in addition to their commitment to functional needs and responsibilities owed to the larger design ecosystem. The sentient designs produced by SM.LL is aware of its context of origin, reminding that indeed ‘in the particular is contained the universal”.