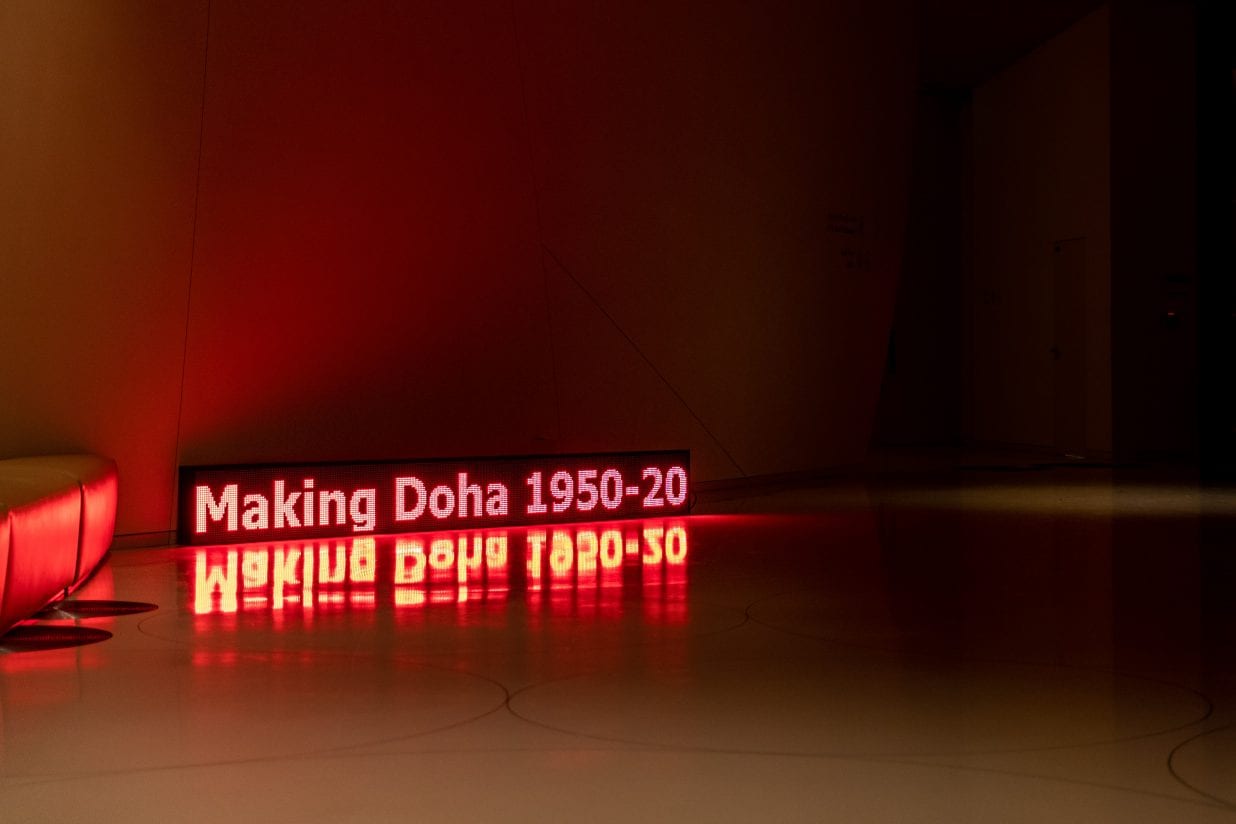 Doha to the World

The Making Doha Exhibition was a temporary exhibition within the National Museum of Qatar (NMoQ) and it has plans to travel around the world to come back as a permanent exhibition in 2022. It charts out the architectural acmes of Doha and shows how a country used design to map it’s capital city’s economic growth. By Sindhu Nair 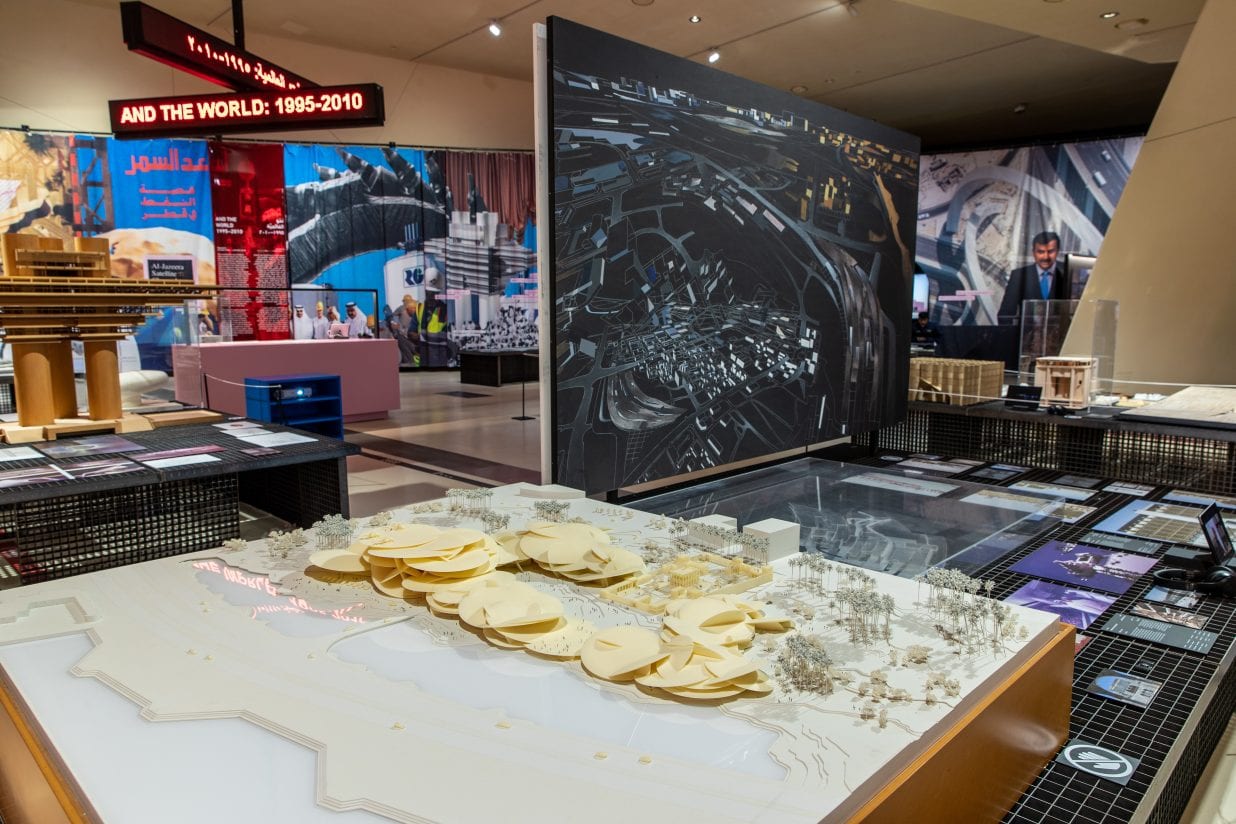 Making Doha 1950-2030 is an exhibition that charts the architectural map of the city as it evolved under a country that discovered oil to economic and social progress through gas exports. While it is entirely an architecture and urban planning research-based exhibition, the curation is ingenuously appealing to the common man. The exhibition is a revelation to those who have lived in Qatar all their lives as the exhibits usher in nostalgic memories, it is also equally fascinating to those expats who have seen the skyscape and city structure change before their eyes. For a new visitor, who has not seen much of the country, this is a historical perspective of how a country, not much known in the architectural realm, creates a well-planned city that has grown organically. 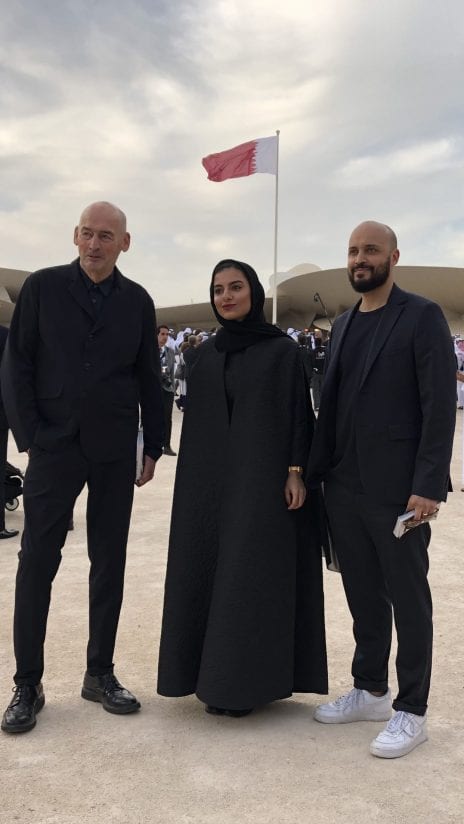 Curated by Rem Koolhaas and Samir Bantal of OMA/AMO and Fatma Al Sehlawi of the Qatar based research team from Atlas Bookstore, and designed by a team from OMA/AMO, Making Doha 1950-2030 brings together 70 years of photographs, models, plans, texts, films, oral histories, and archival materials to chart Doha’s transition from organic growth to more modern and deliberate planning practices. Scale talks to Fatma Al Sehlawi to understand the process behind this herculean task of mapping the progress of the city through its architectural works.

As Fatma takes Scale on this journey of discovery, we come to a conclusion that there cannot be a more passionate person than this Qatari architect and curator whose knowledge in the field of architecture surpasses only her love for her country.

But how did QMA zero-in on OMA and Atlas Bookstore for this arduous task?

“Both OMA and I had working relations with Qatar Museums (QM); I was employed by QM to lead projects that were commissioned to QMA to master plan and design. I personally curated exhibitions on the architecture and urbanism of the Middle East and North Africa, through the research carried out by Atlas Bookstore. OMA/AMO had completed a number of exhibition commissions around the world. The largest and possibly most famous of them is the 2014 Venice Biennale,” explains Fatma. 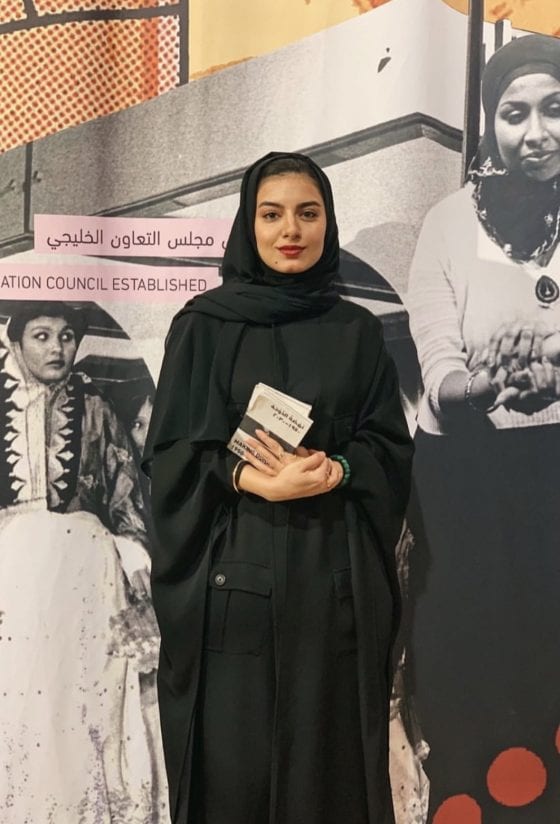 “The introduction of a new material, concrete, was the initiation of the birth of a modern city and the income from oil would facilitate the growth. Hence 1950 was the year that Doha moved on to become a modern city.”

“The brief was to put together an exhibition on the architecture of the country. It was a wide brief and we had to put together a structure and different parameters to group projects around it. We decided on a time period; we decided to start from the year 1950 to 2030. The year 1950 followed the first export of oil out of the country in 1949 and it was also the year when concrete was used for the first time as a building material. Before that, it was mud bricks or stone that was put to use as building materials. The introduction of new material was the initiation of the birth of a modern city and the income from oil would facilitate that. Hence this was the year that Doha moved on to become a modern city.”

The visitors are greeted by a timeline represented on the flooring that guides one chronologically to the developments within the country. One starts in the year 1950.

“Pictures and videos show life in Doha at that period of time and we have the first two documentaries made by foreign petroleum companies that show how life was in that period,” says Fatma.

The amount of research that has gone into this exhibition can be perceived by the various photographs and videos displayed but what is important to note is that the country till then did not have such documentation of life and architecture, collected or saved in archives together under one authority.

“There was not a single archive where we could source all the information, so we had to visit all these different entities to get the relevant material,” says Fatma who was in charge of research and her team under the aegis of Atlas Bookstore divided the various mediums involved amongst the team and collected information of Doha across those mediums, like video content, newspaper clippings, mention of Qatar and Doha in various foreign publication in the 50s, through oral history and architectural briefs and so on, “It wasn’t a very direct method of research. We had our brief in December 2018 and we needed to have all this ready by March 2019.”

The next hurdle was the display. The wall surface within the exhibition space was challenging with plates meeting and crossing at different levels, giving a complicated inner wall surface, as complex as it looks in the façade. “We solved this problem by creating a visual collage with historic moments in pictures depicted in it. This was then printed on a 120-metre long curtain that smoothened out the periphery,” explains Fatma.

“We broke down the timeline into these periods; beginning with oil export in 1950, the segment called the Seeds of a Nation (1950–1971). The Modern State (1971-1995), the next segment, from the independence of the country in 1971 to 1995 when HH Sheikh Hamad bin Khalifa Al Thani became the Emir which paved way for many more developments in the architectural fabric. And the World (1995–2010), 2010 being the year when we won the World Cup host and lastly, Destination Qatar which is from 2010 to 2030 which is the year till which the Qatar National Vision is planned for.” 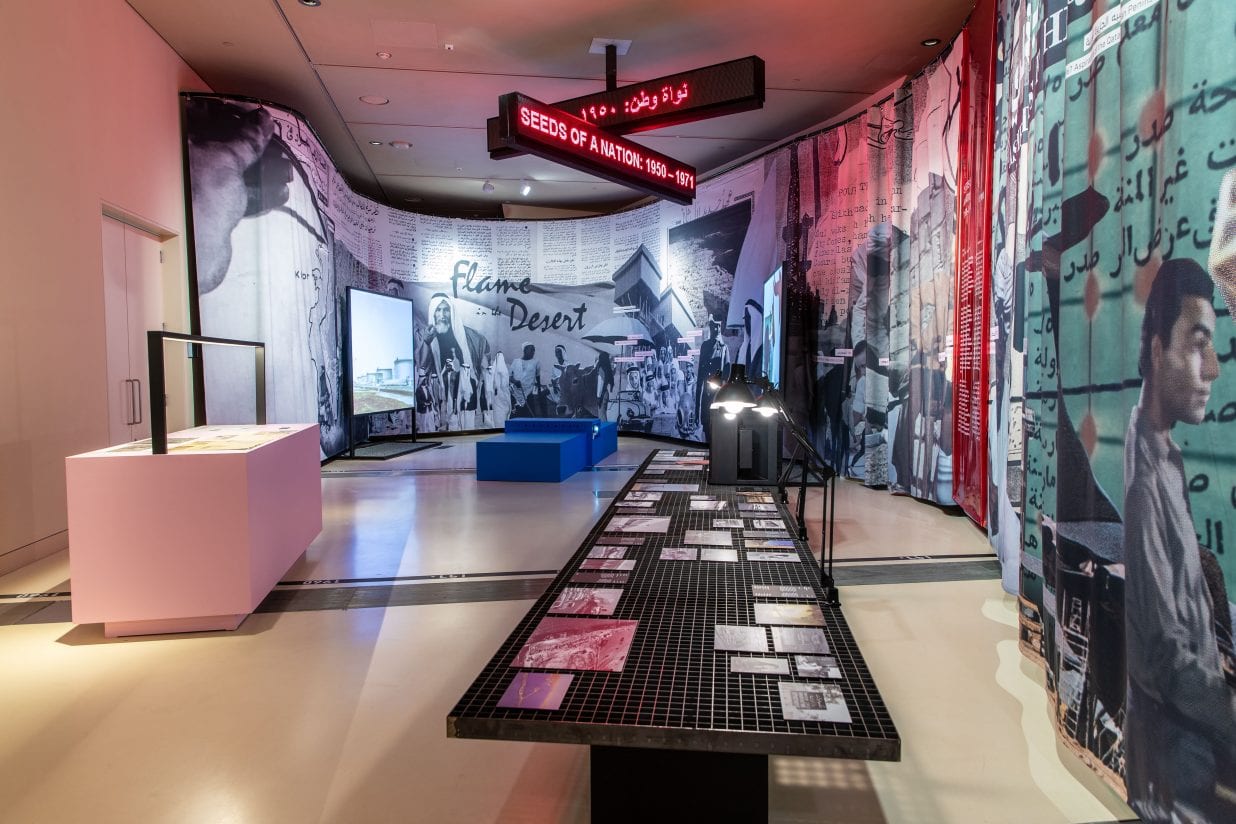 The school building prototypes, which still serves as an example for all school buildings in Doha, the first desalination plant, the first public art monument, the Clock Tower, which reminds the society of the essence of time, the first architecture competition to design the  Rumelia Hospital won by Architect John Harris who went on to design many hospitals in Dubai and Bahrain, the first airport building, the Doha Stadium, the first grass football stadium in the Gulf, were all upgrades in the fabric of society and all of this started appearing as seeds in the desert for a modern state and society. All of these examples are collected and displayed in the segment named as the Seeds of the Nation.

One of the most historic buildings of this period was the Doha Sheraton Hotel designed by William Pereira, the first high-rise buildings in the country, built on reclaimed land. All photographic images capturing the construction stages of this triangle-shaped iconic-building was displayed in this segment. 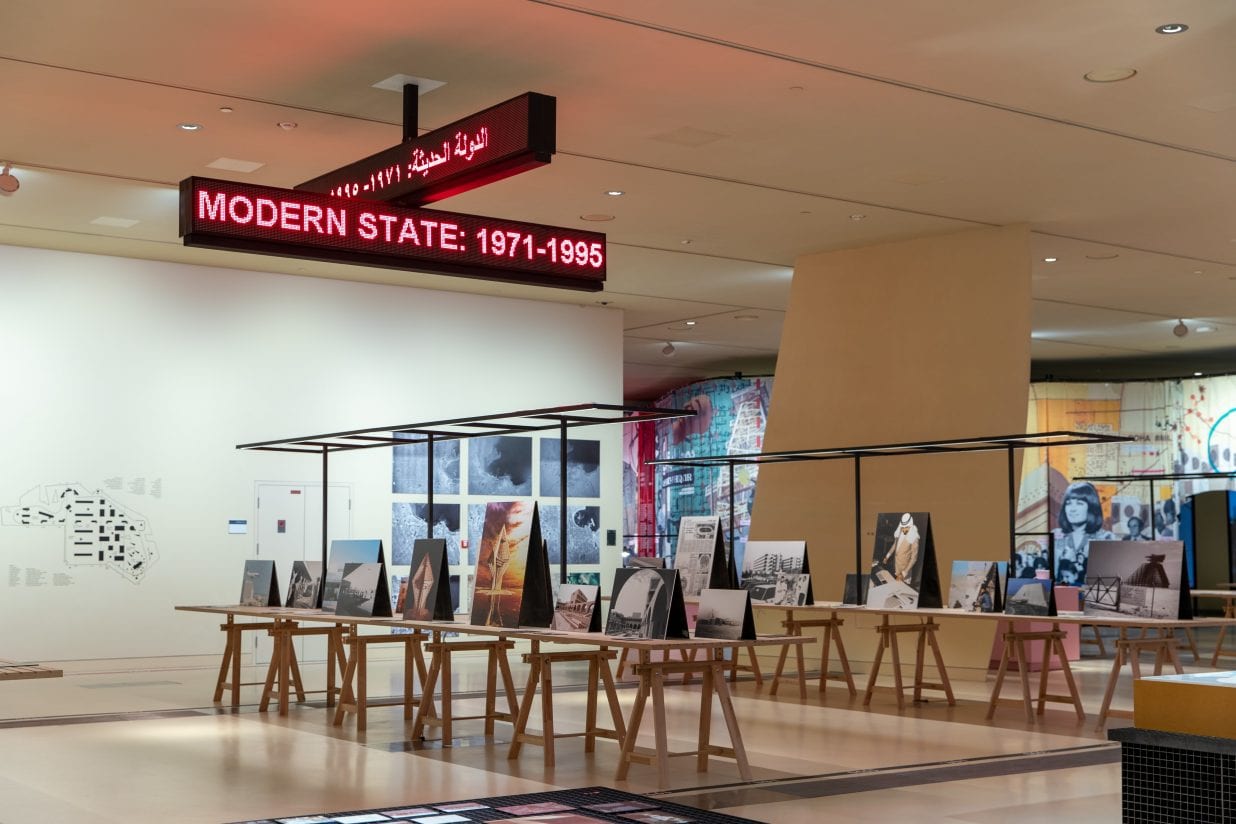 The period of 1970s was when the first planning office was established in Qatar and the office of Llewelyn-Davies were commissioned to produce the first development plan in 1972 which was to last two decades till 1992 and was abandoned in two years as the population explosion in the country was much above than what was anticipated.

Stories such as these are gems that rise from this exhibition and Fatma is one tireless narrator with the mind of a historian who throws dates and names effortlessly as she has encapsulated most of the details in her mind and has an insight into every single content within the exhibition. 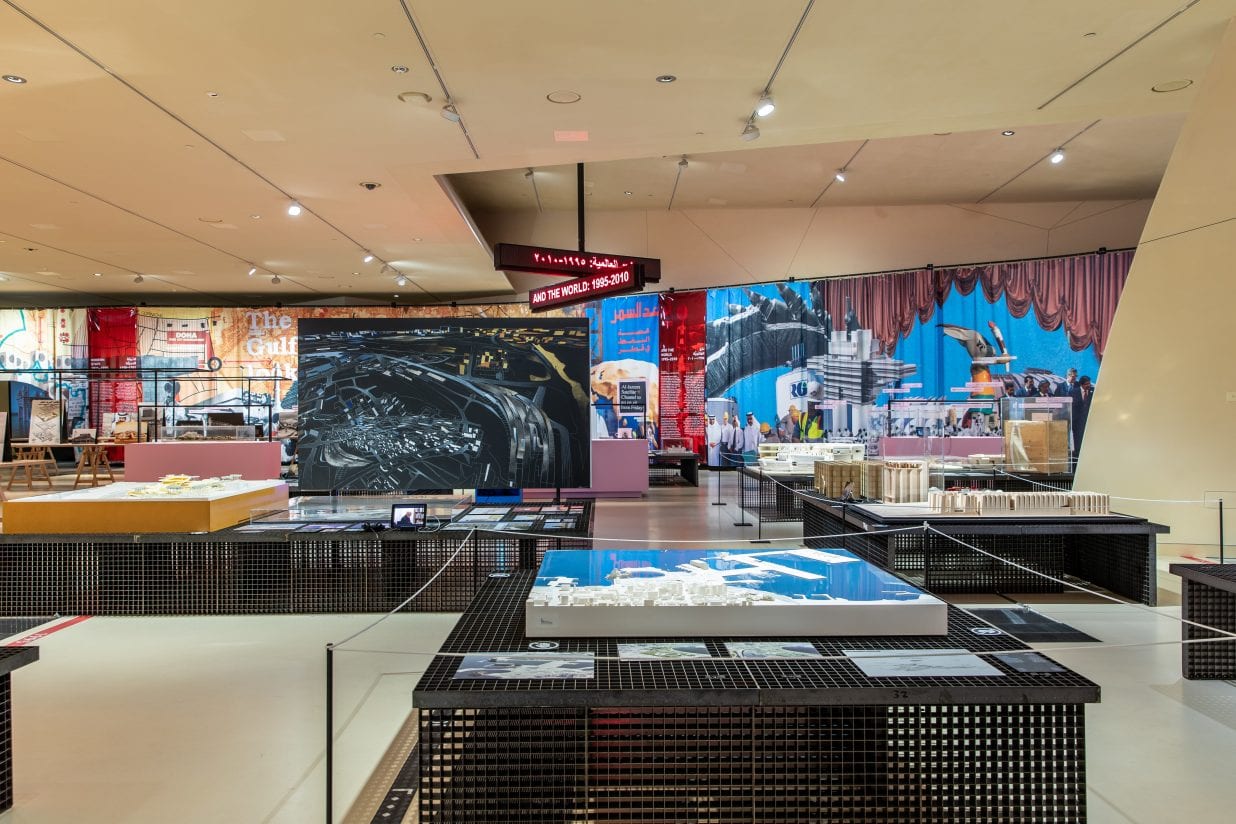 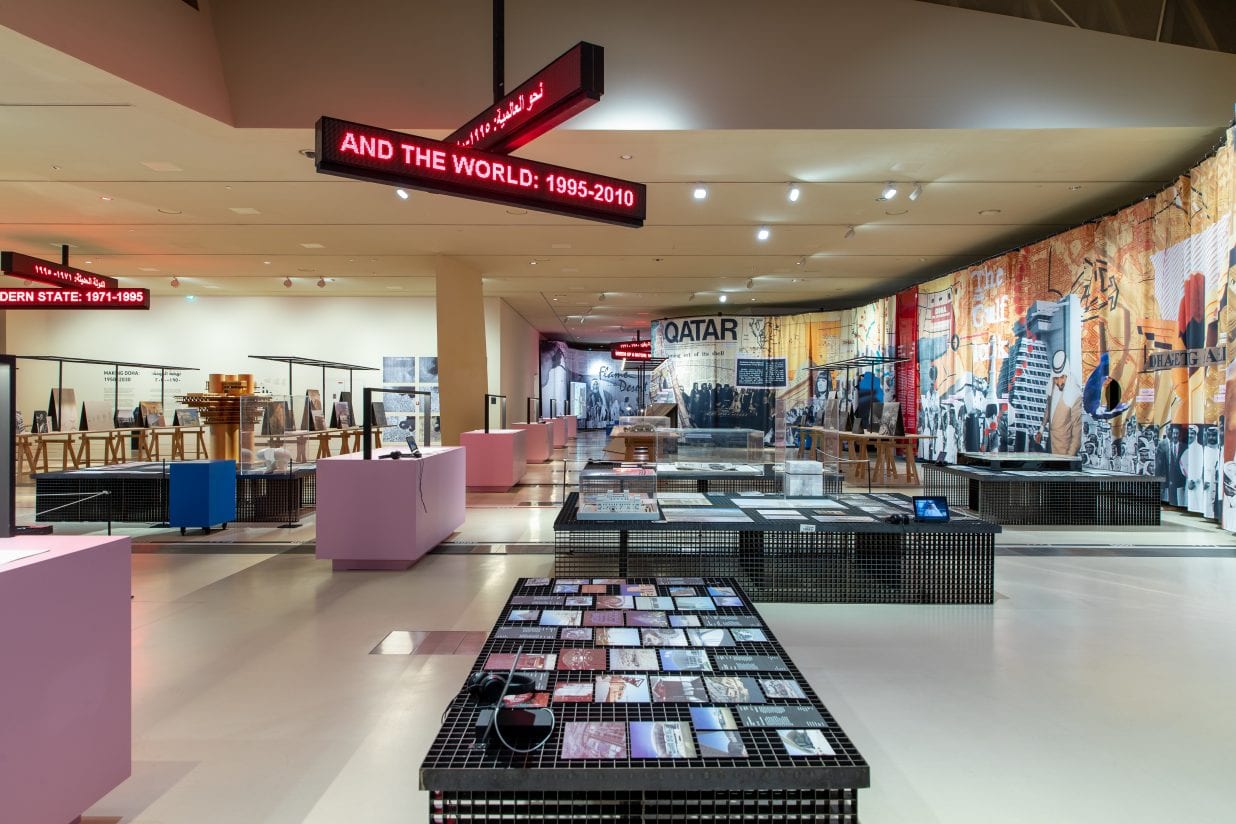 Another story that Fatma narrates is equally intriguing. “After my graduation, I was looking to intern at any of the QM projects and was invited within the old site office of QM which was then a site office near the Qatar Post Office. I went inside and saw this huge model of a building designed by Arata Isozaki, which was a design for the Qatar National Library but for a different site on the Corniche. They found that conceptually this building wasn’t feasible and abandoned the project after work had started.”

So, when years later, Fatma was commissioned to research for this exhibition, and while curating for it, she was reminded of this model and started her hunt for it. No one was sure where it was and finally Fatma asked permission to enter the old abandoned site shed of QM and entering it, she found the model in the exact position as she had seen it in, years ago. A jewel of architectural history waiting to be picked by the right person.

Projects designed and abandoned, an architectural model of the Museum in Lusail, which is to be built, a contemporary art and design quarter within the new Art Mill area on the old port, which was selected through a competition, of which all the entries were displayed in the last portion of the display. An architectural model of an affordable housing development which elevates construction workers’ living conditions by limiting the number of workers in a room and by bringing all their recreational spaces under this roof, is also displayed within the And the World section. 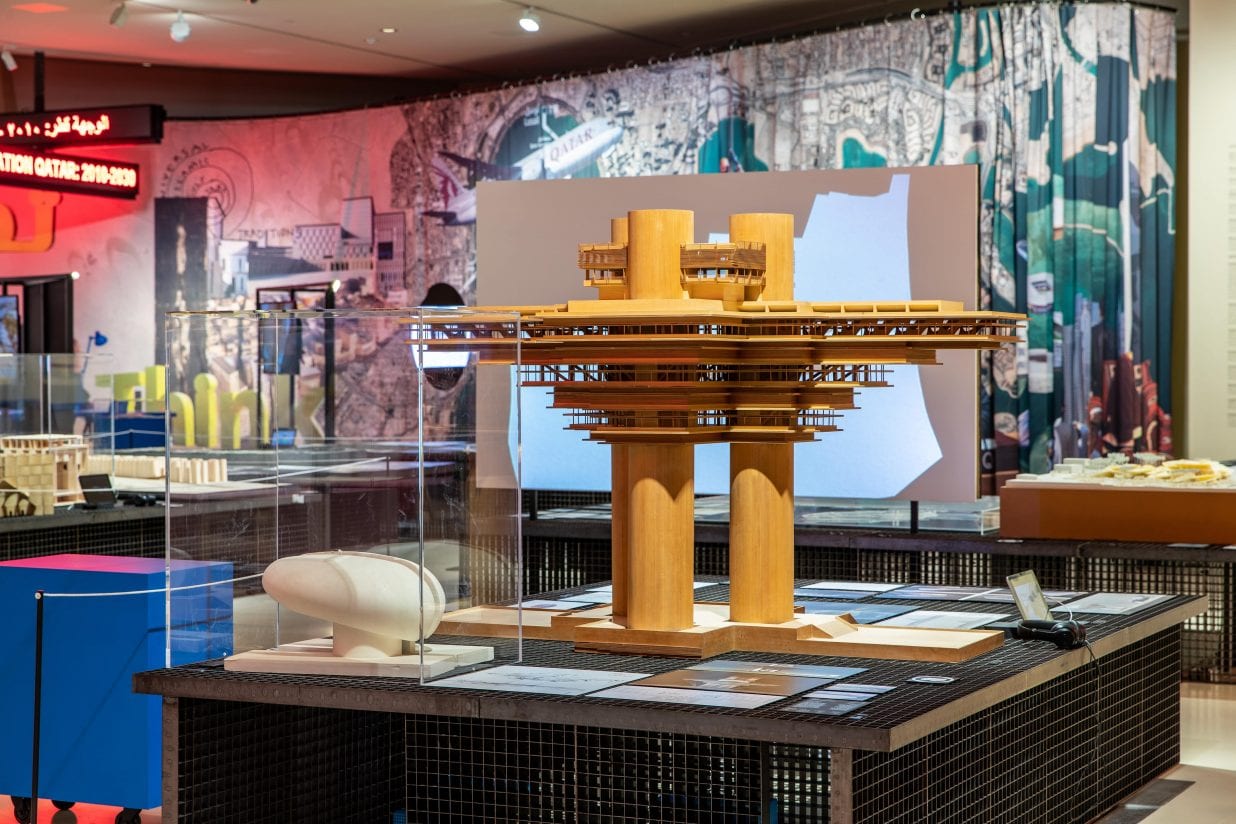 The model of the initial Qatar National Library designed by Arata Isozaki which was planned on the Corniche. 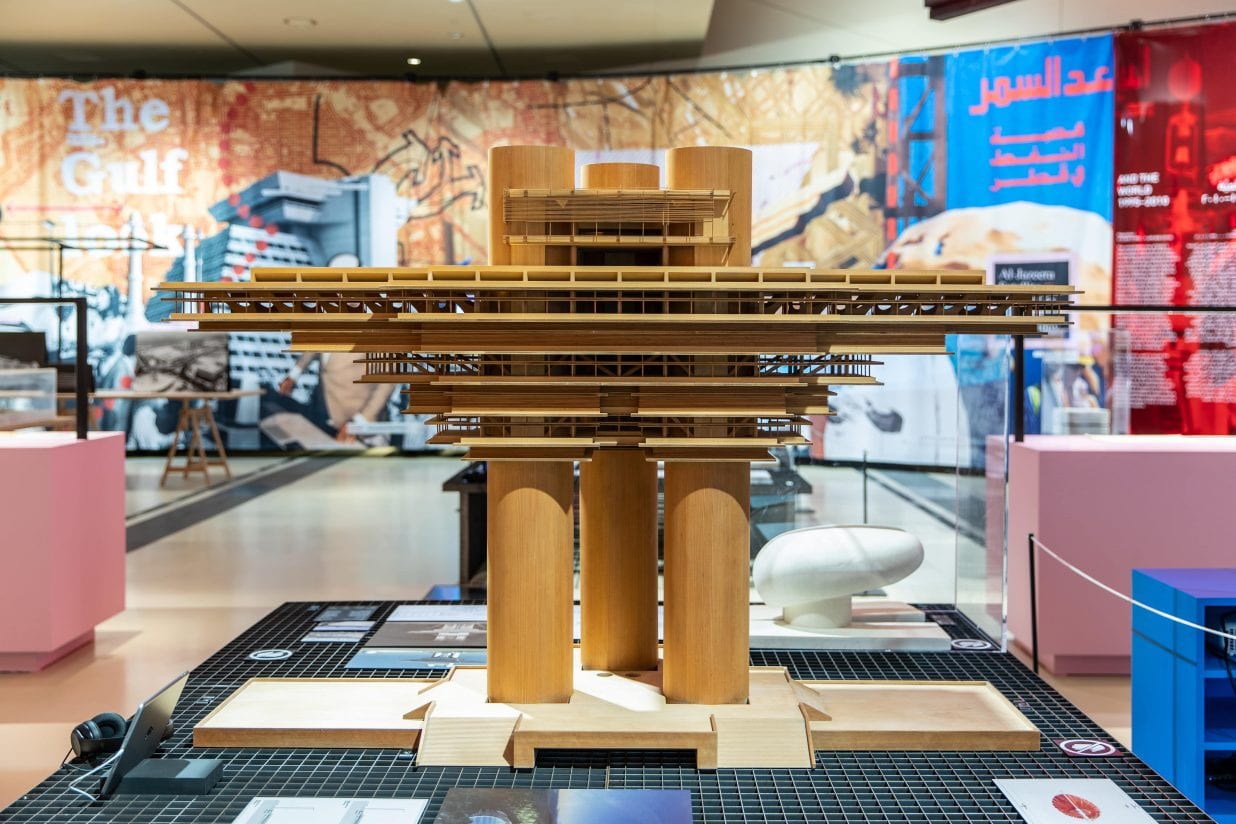 Fatma says that Rem Koolhaas had a deep interest in the country due to the decade long association during the construction of Qatar National Library and the Qatar Foundation Head Quarters.

“Rem and Samir Bantal were completely hands-on with everything we did here. They used to join in on our research meetings’, advising and discussing ways of the display, content segregation, the structure of content,” she says.

Rem had also studied the growth and architectural landscape and has an assessment of the progress the country has seen.

He says that typically in any country, the learning curve eventually flattens out but here in Qatar, the curve keeps climbing steeper, by relentlessly placing tremendous challenges before itself, the major airport, The Asian Games, the World Cup, the educational institutions, the Qatar Museum projects. Qatar puts itself in a situation where the curve constantly becomes steeper, he reflected.

He says, “It is ironic that the average critic has not captured the emergence of Qatar’s unique conditions. Still referring routinely to the country’s nothingness of its beginning, they have not deciphered the values that are manifest here.”

And as Qatar moves on to achieving its next milestone, of hosting the World Cup, this exhibition gives an overarching view of the legacy of the pioneering projects.

As this exhibition makes it rounds around the world, it will finally give an insight to the world that a country in the Middle East has architectural dreams that match its progress and an intent to deliver on its dreams. 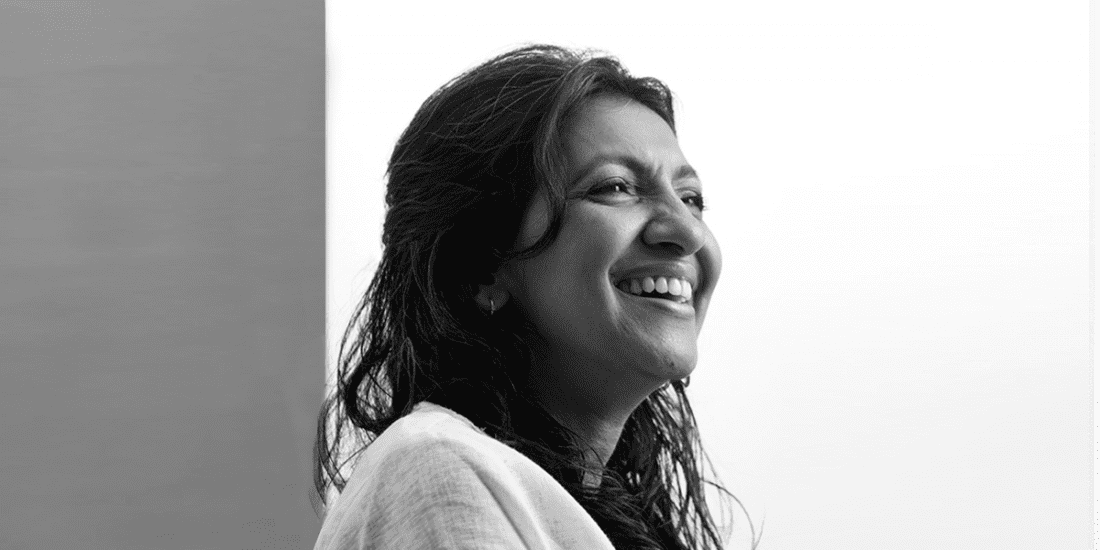