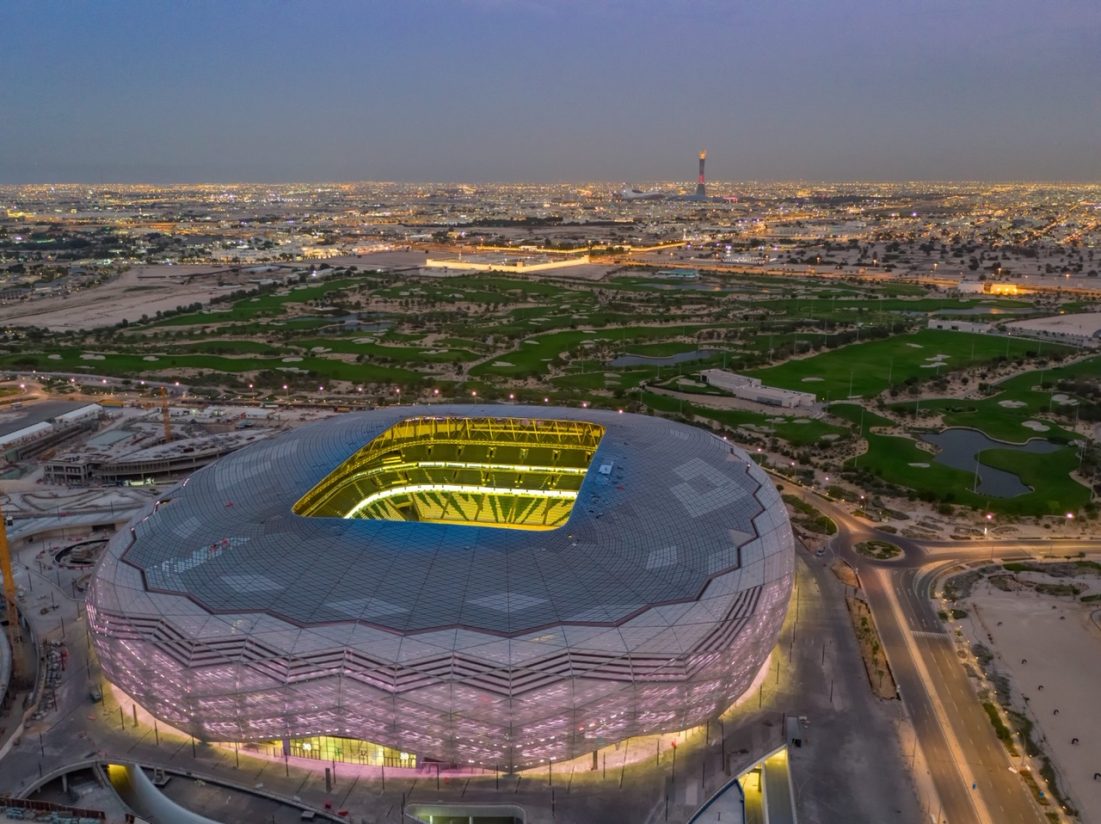 The Supreme Committee for Delivery & Legacy (SC) and Qatar Foundation (QF) announced the completion of the third tournament venue for the FIFA World Cup Qatar 2022™. The Education-city Stadium is designed by Fenwick Iribarren Architects and later on by Pattern Design. The opening of this new venue for the much-awaited World Cup signifies hope in the current lock-down pandemic conditions existing in various countries 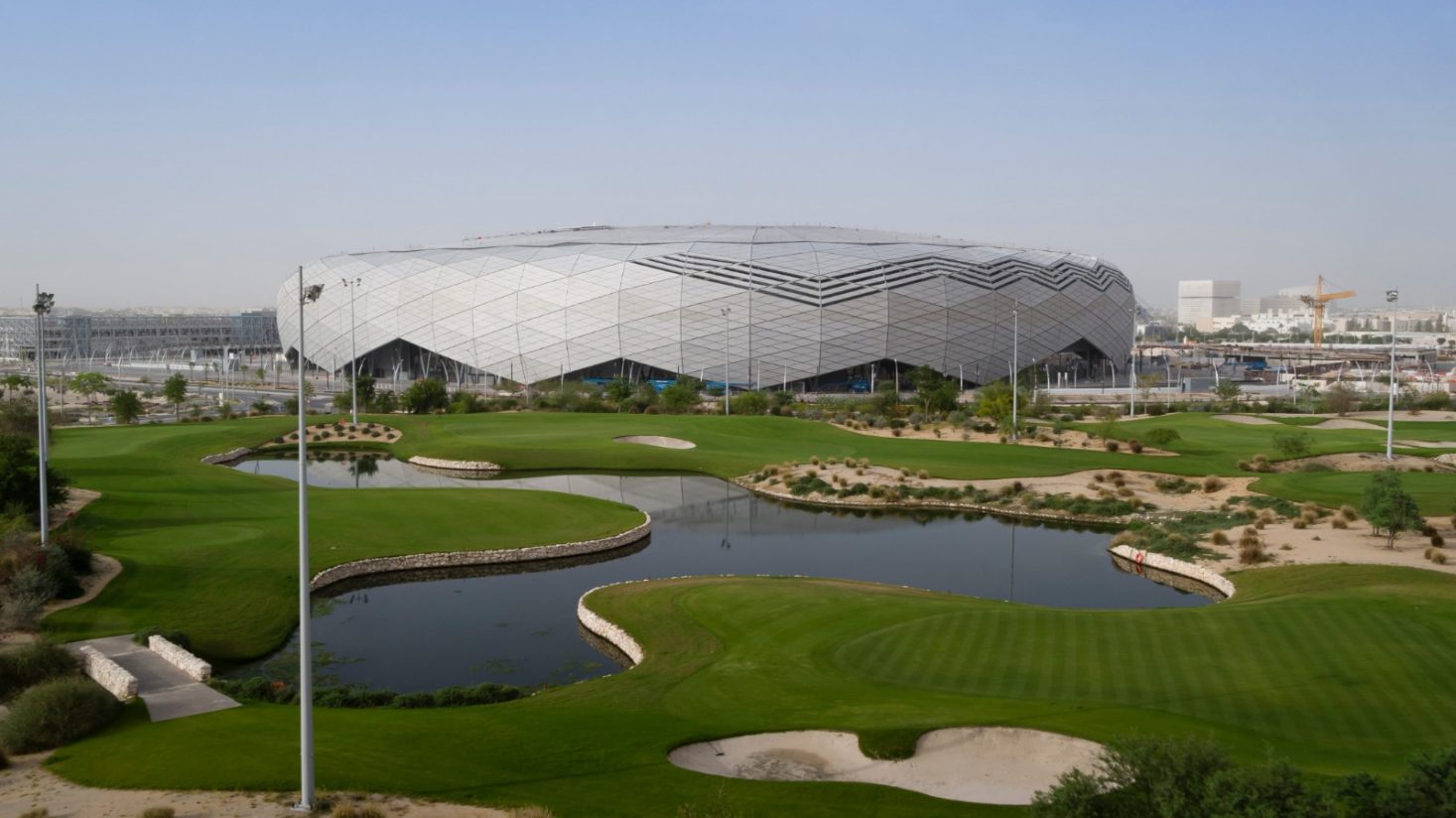 Designed to feature a façade that incorporates triangles that form complex, diamond-esque geometrical patterns that appear to change colour with the sun’s movement across the sky, the Education City Stadium is envisioned as a green belt in the Campus. The faceted nature of the metallic fabric façade envisioned initially by Fenwick Iribarren and later put in action by parametric and stadium design experts Pattern Architects from the UK has a strong geometric tessellation consisting of diamonds and triangles, which means each panel will reflect different qualities of light, sparkle with different hues, and mirror different aspects of the surrounding site. The movement of the sun throughout the day will animate and transform the appearance of the Stadium, creating an illusion of constant motion, whilst at night its inner glow will emanate out through the façade.

Like diamonds, the stadium’s design represents quality, durability, and resilience, and will become something to be treasured – both for the memories it holds and its future value to the country and region.

The stadium’s completion will be marked digitally on the SC’s social media platforms, in light of the current COVID-19 pandemic, and via special 60-minute programmes in both Arabic and English on beIN SPORTS on June 15. The ‘Road to FIFA World Cup Qatar 2022™’ Arabic show will commemorate the stadium’s completion and official unveiling, while the English show will feature special guests who debate the future of sports in a post-pandemic world. Notable guests will include FIFA Technical Director and former Arsenal manager, Arsene Wenger, Bundesliga CEO, Christian Siefert, and Belgium national team manager, Roberto Martinez, among others. 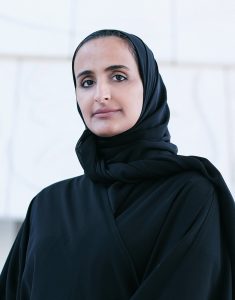 We are delighted and proud that it stands within our community at Qatar Foundation and congratulate all involved in bringing the vision of this stadium to magnificent reality.

QF, Vice-Chairperson and CEO, H.E. Sheikha Hind bint Hamad Al Thani said: “The eyes of the world will be on this stadium when it hosts matches as the World Cup comes to Qatar and the region in 2022, but its value will extend far beyond the tournament.

“The stadium’s place at the heart of Qatar Foundation’s vibrant, open community will make it an enduring focal point and a hub of activity, social interaction, and knowledge. It will continue to bring people together long after the World Cup, encourage them to embrace sport and healthy living, and – as one of the world’s most sustainable sporting venues – promote the importance of making sustainability a key element of our lifestyles.

“This is a stadium to experience, enjoy, learn from, and be inspired by, with a lifespan that will stretch across generations. We are delighted and proud that it stands within our community at Qatar Foundation and congratulate all involved in bringing the vision of this stadium to magnificent reality.” 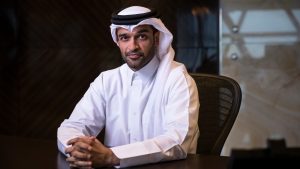 We remain on track to deliver the first FIFA World Cup in the Middle East and Arab world – and hope to unveil two more stadiums by the end of the year.

FIFA World Cup Qatar 2022 Chairman and Secretary-General of the SC, H.E. Hassan Al Thawadi, said: “The completion of the third tournament-ready venue is a proud moment for the SC, QF and the entire country. We remain on track to deliver the first FIFA World Cup in the Middle East and Arab world – and hope to unveil two more stadiums by the end of the year.”

Al Thawadi continued: “While the world continues to battle COVID-19, we hope news of the stadium’s completion shows there is light at the end of the tunnel. We will soon return to something approaching normality – including football matches in packed stadiums.

“The first World Cup in our region – and only the second in Asia – was already incredibly symbolic. However, due to COVID-19, I believe our tournament has taken on added importance. It can be football that brings everyone together after COVID-19 and Qatar looks forward to brighter times and uniting the world at this very venue in 2022.”

The Arabic show will be broadcast on beIN SPORTS HD1 at 7 PM Doha time. The English show will air simultaneously on beIN SPORTS HD11. Both shows will be streamed via the SC and QF’s social media accounts, along with the beIN SPORTS free-to-air channel. Al Kass TV, Al Rayyan TV, and Qatar TV will also mark the event on their channels.

The project manager for the stadium is ASTAD Project Management, while Fenwick Iribarren Architects served as the original concept lead designer. The main works contractor is JPAC JV, who appointed Pattern as the design architect, Salfo as the site lead designer and BuroHappold for engineering design.

All these organisations cooperated and coordinated closely to create an inspiring stadium, with sustainability at its heart. Just like the diamonds that inspired its form, Education City Stadium will be treasured from generation to generation, an heirloom for an entire region. The stadium is integrated into the Qatar Foundation university complex. As well as fulfilling the Clients Brief as the principle Sports Complex for the Education City in Doha, Fenwick Iribarren wanted to exploit it as a major social focal point within the Campus as a green area with sun shading elements for public comfort. The Stadium is currently envisioned for group, knockout and quarter-final matches during the Tournament with a capacity for 40,000 spectators. The Stadium´s capacity will be reduced to 25,000 following the World Cup by dismantling the upper tier. 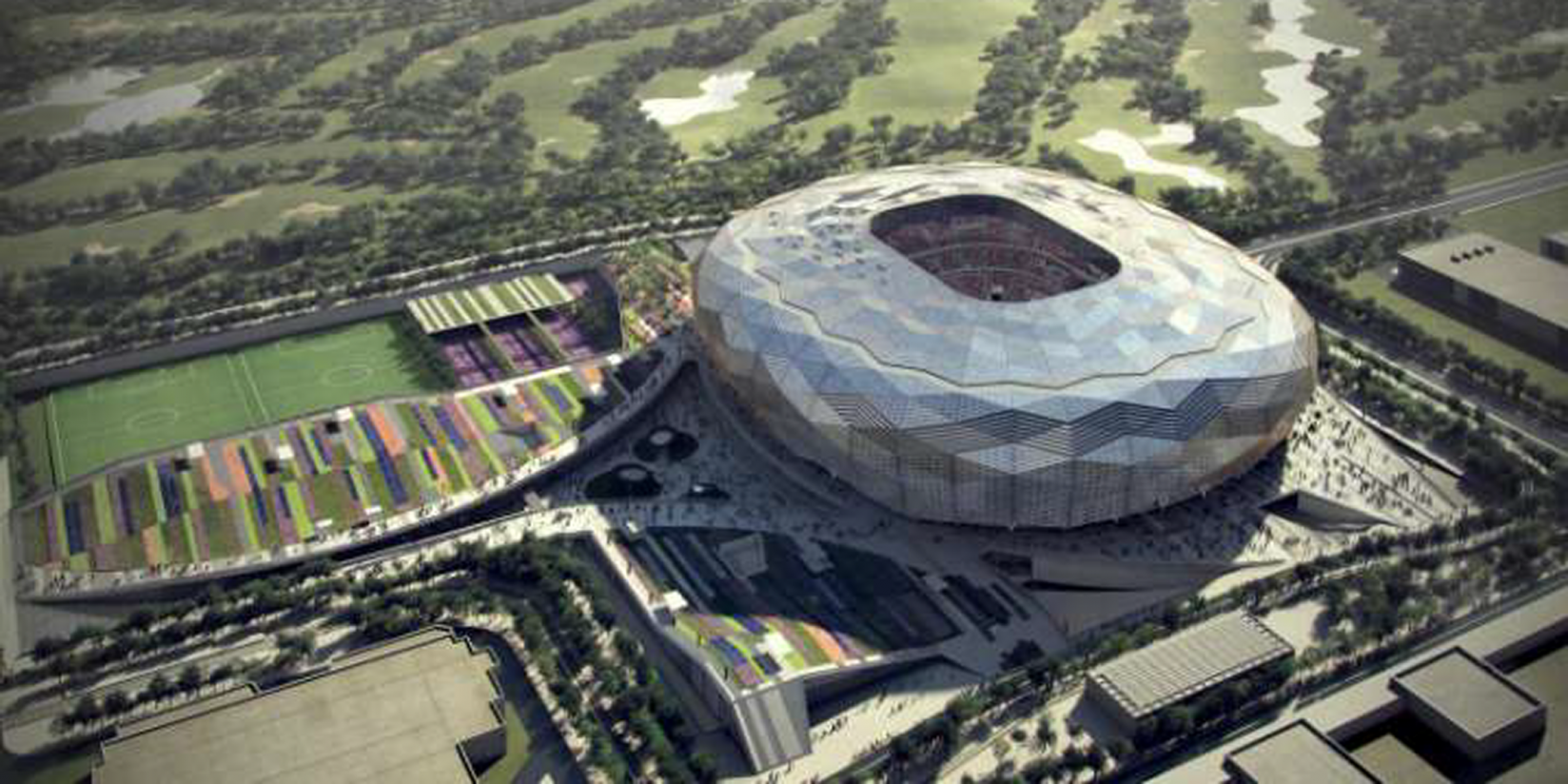 The other principle installations, indoor swimming, tennis, and multipurpose sports pavilions, are entrenched below a faceted landscaped roof that acts as a green forecourt to the iconic diamond-shaped stadium, itself the focal point at the end of a principal east-west axis of the university complex.  This axis is enhanced by the sunken curved street and plaza that provides access to the various sports facilities.  This sunken oasis thus becomes the social hub of activity within the complex and EC, including a wide range of public amenities and facilities. 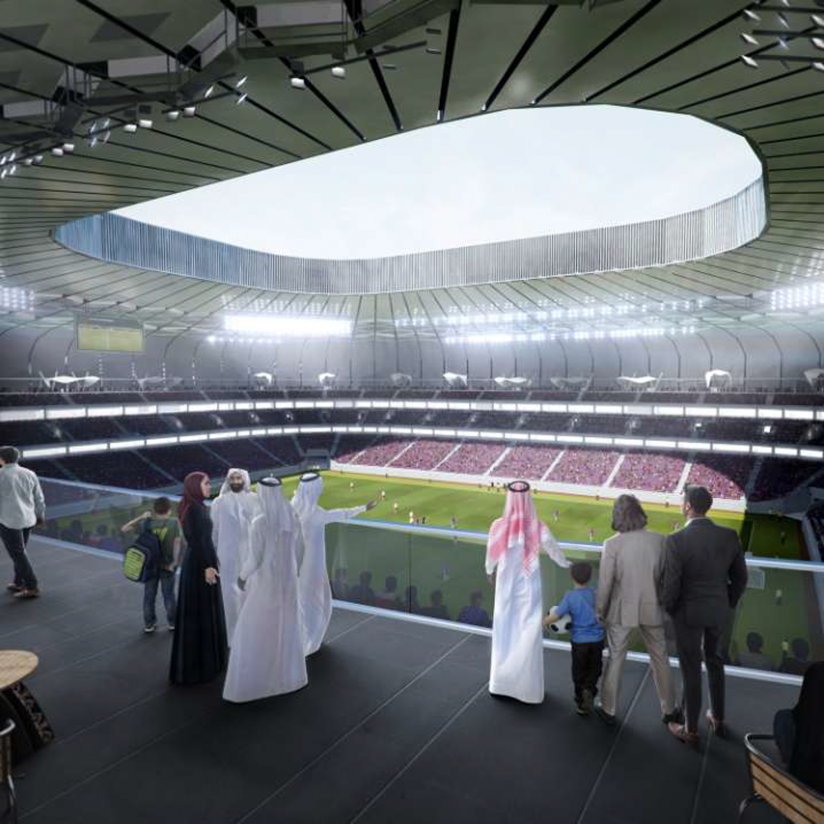 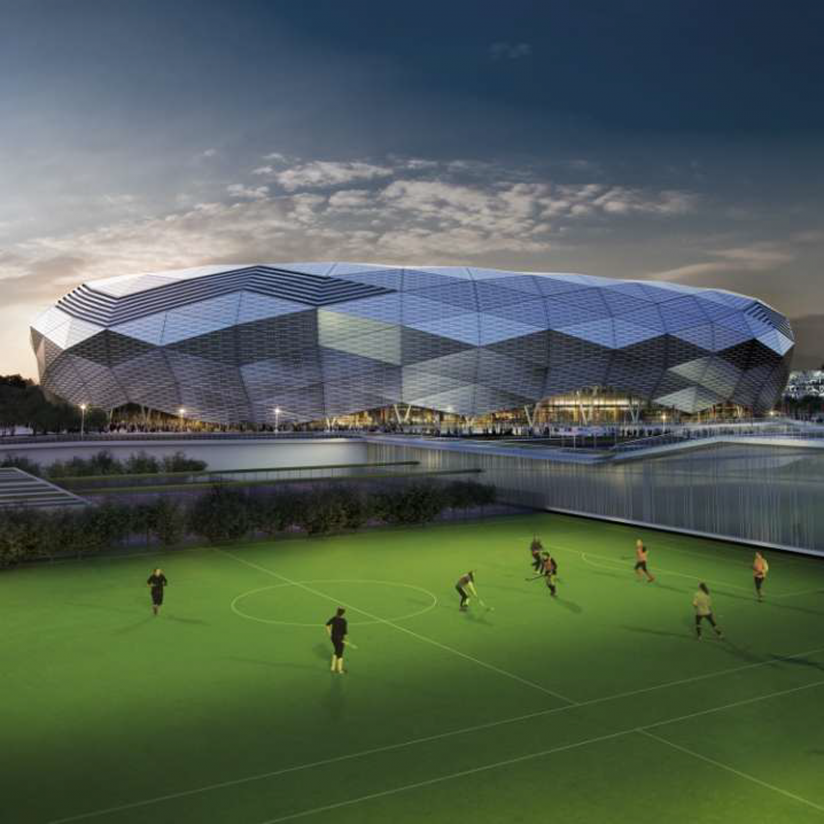 The sides of the stadium will reach up and envelop the pitch – helping the advanced cooling system to operate, bringing people closer to the action, and keeping fans’ songs and cheers reverberating through the arena.

The project has been awarded Five-Stars under the Global Sustainability Assessment System (GSAS), making it the first stadium in the world to achieve such recognition. At least 55% of the materials used on the project come from sustainable sources and 28% of construction materials have recycled contents. 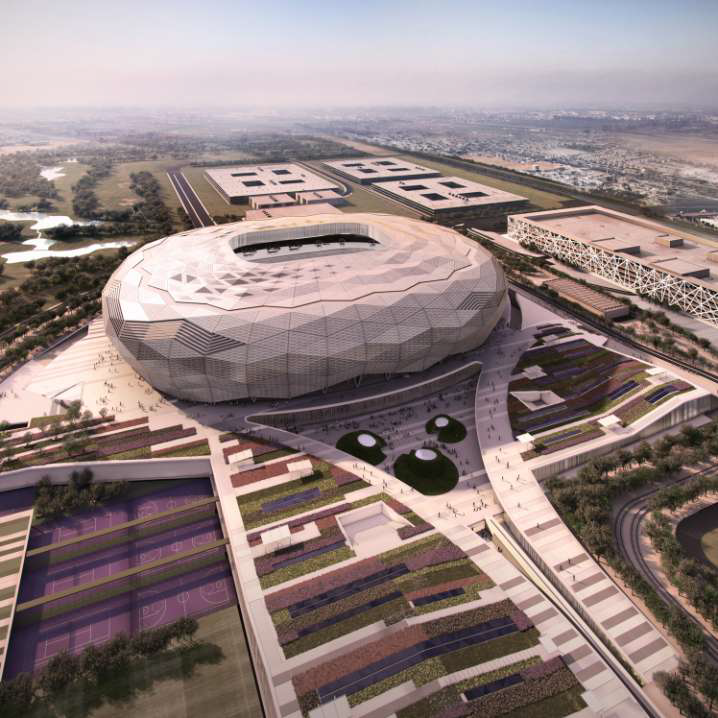 In Legacy, the Stadium will serve the student body of Qatar’s premier educational institutions located in Education City. The venue will also become the home to Women’s Football in Qatar. This is designed to support the Qatar National Vision 2030 that includes the goal of bolstering women’s role in all spheres of society and empowering them to be active community members. 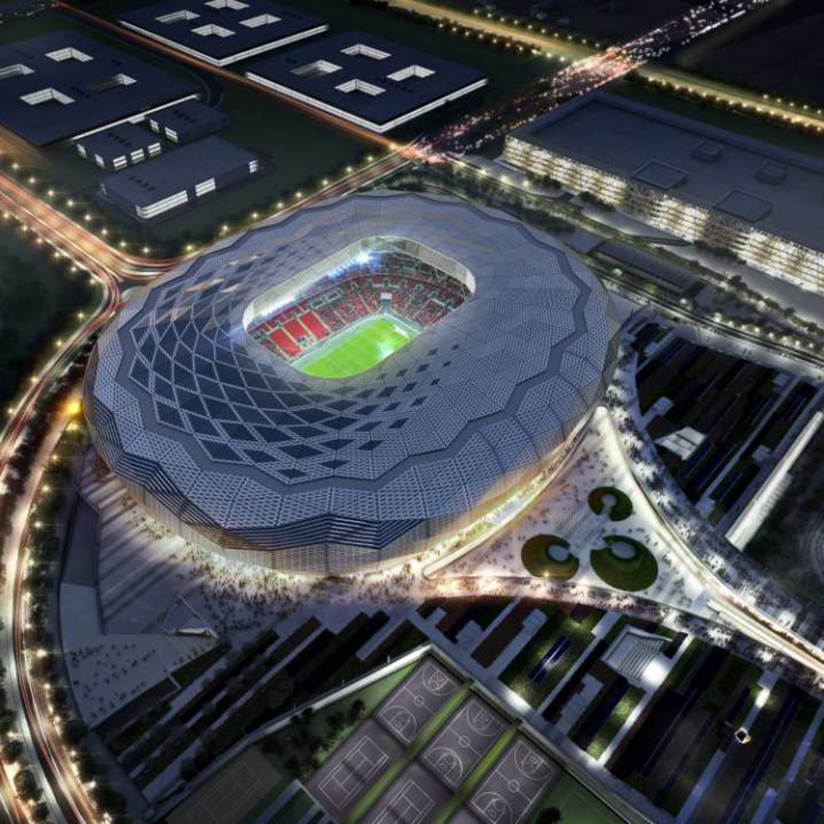 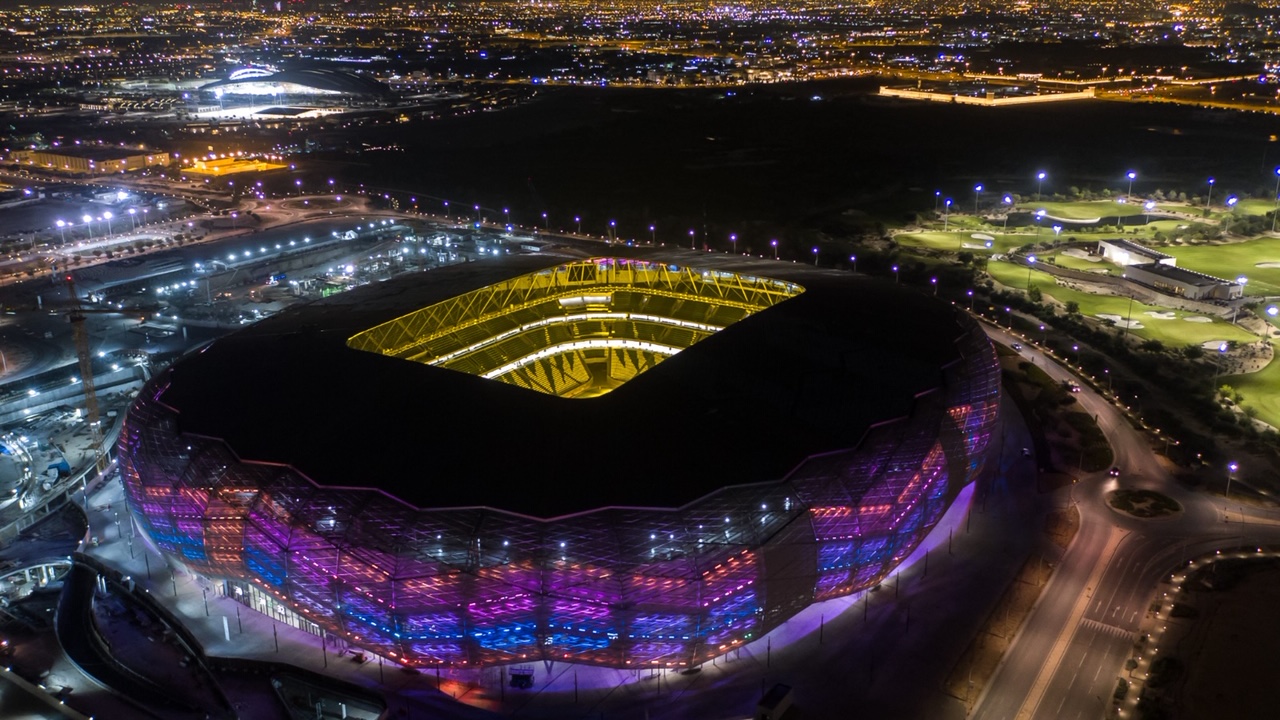 The bespoke design of the arena responds to the climatic challenges of a desert stadium. The stadium features direct under-seat bowl cooling to every spectator, ensuring comfort even in the summer months.

The original concept was produced by Fenwick Iribarren and Arup. Pattern were appointed in 2016 as Lead Architects to design and deliver this reference design. Alongside Buro Happold Engineering, the project has been developed through all work stages, refining and optimising the concept, whilst also ensuring full compliance with FIFA regulations.