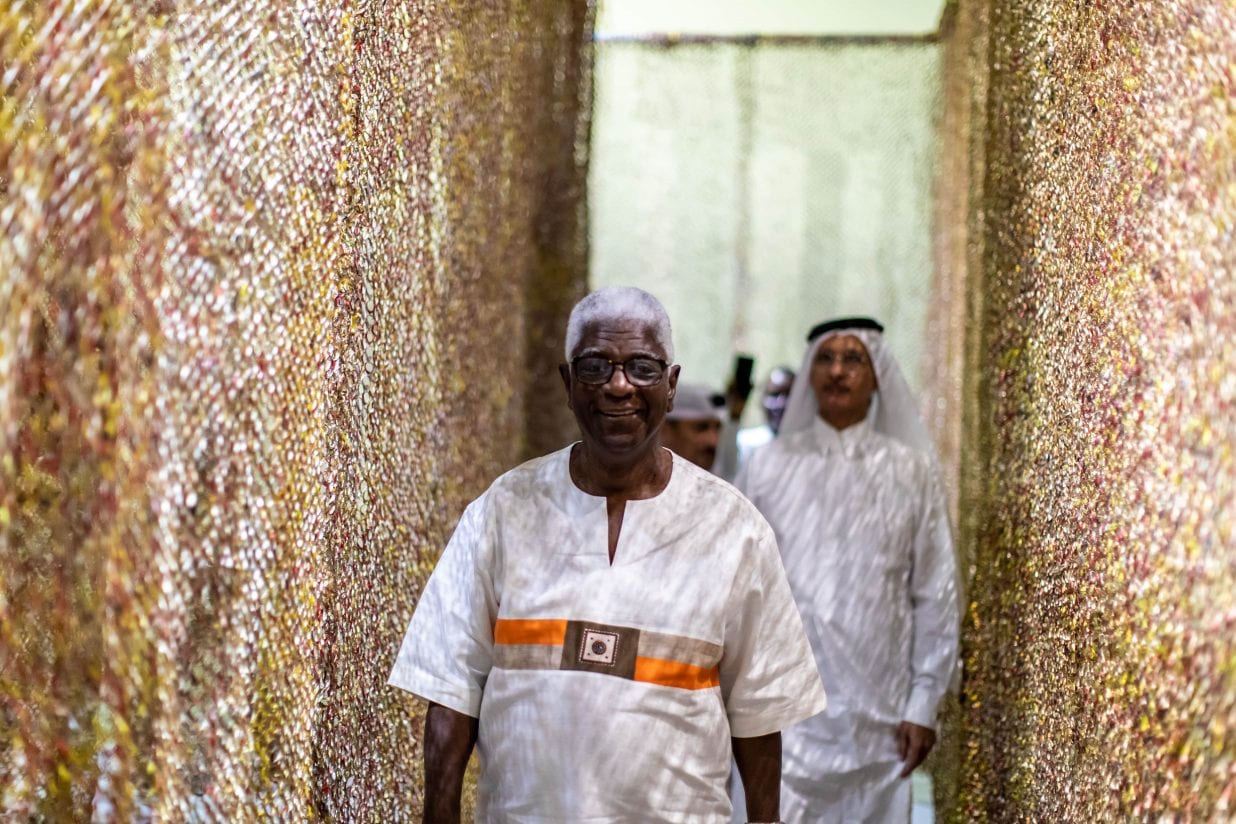 El Anatsui: Triumphant Scale is a homage to the artist who put African art forms in focus and also an epitaph to the curator, Okwui Enwezor, who worked relentlessly to broaden the global perspective of art that was mostly confined to European and American art forms. By Sindhu Nair 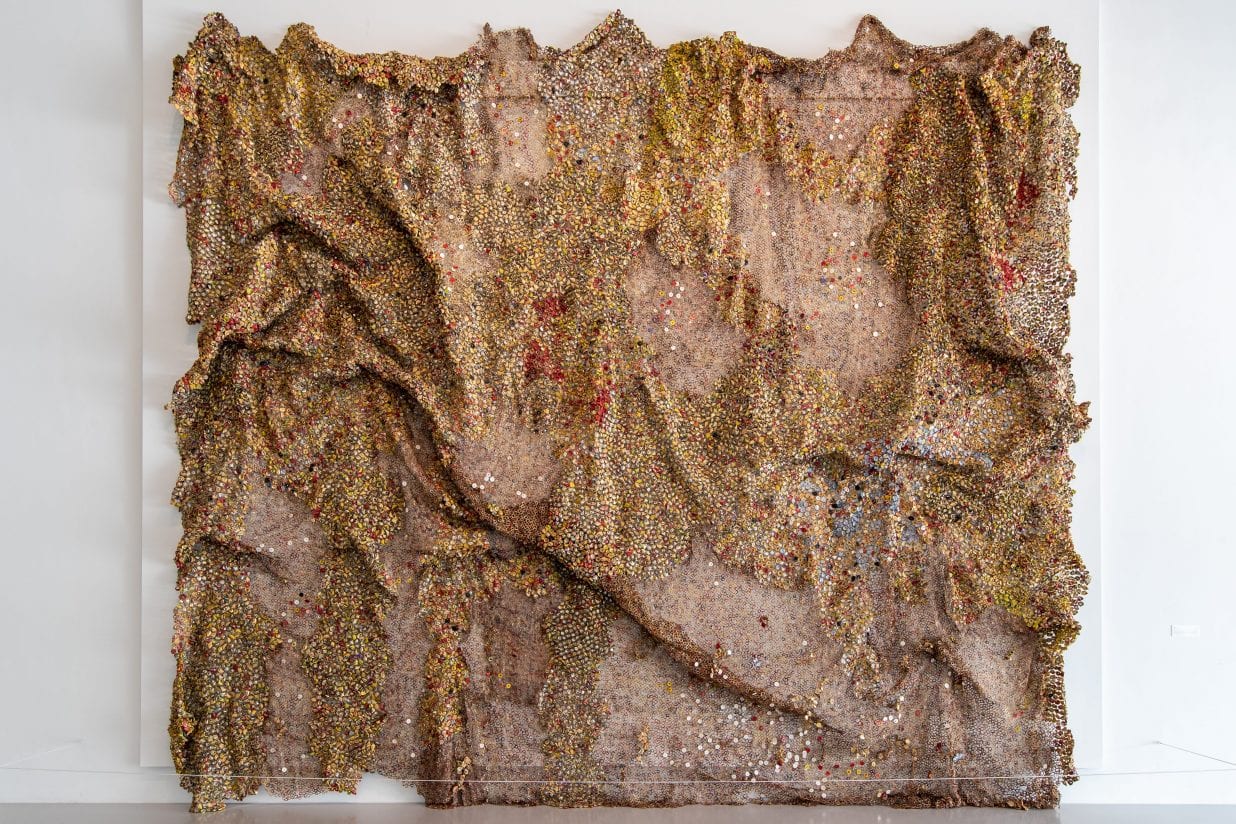 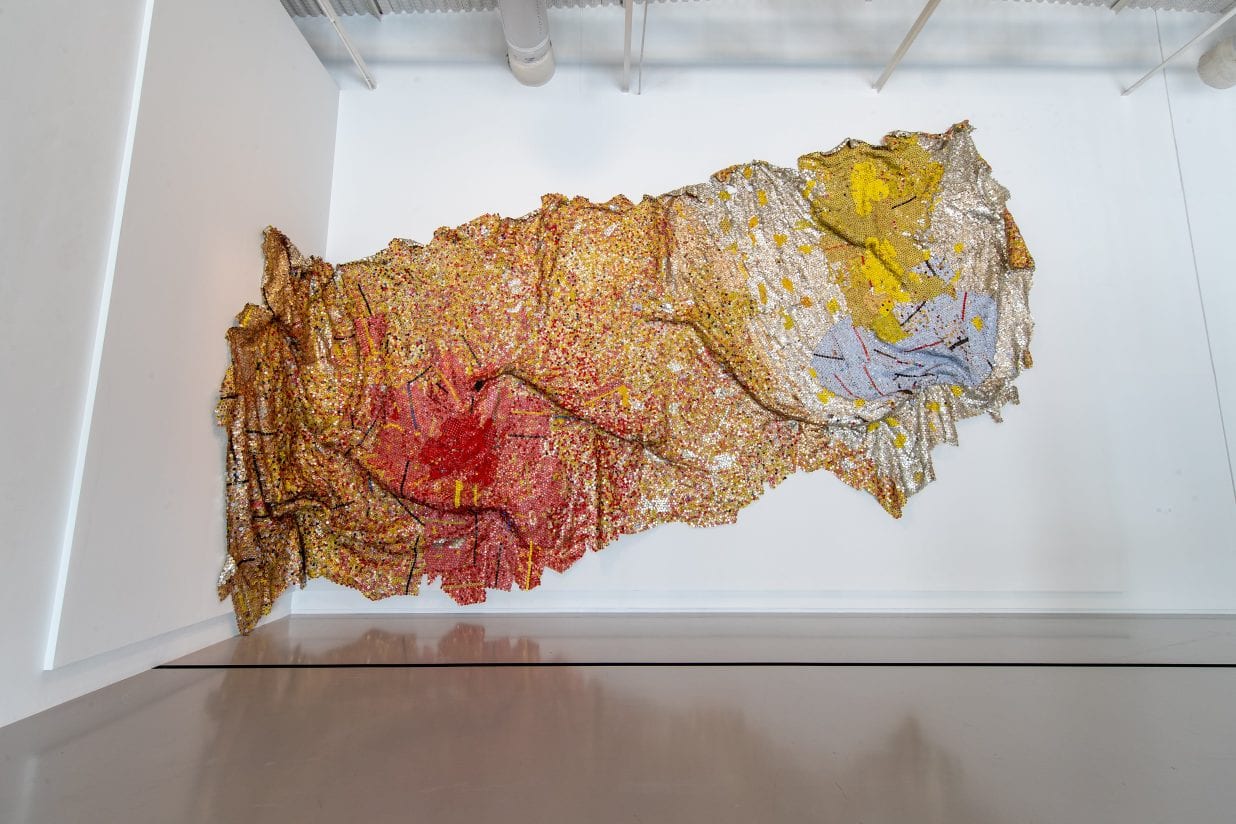 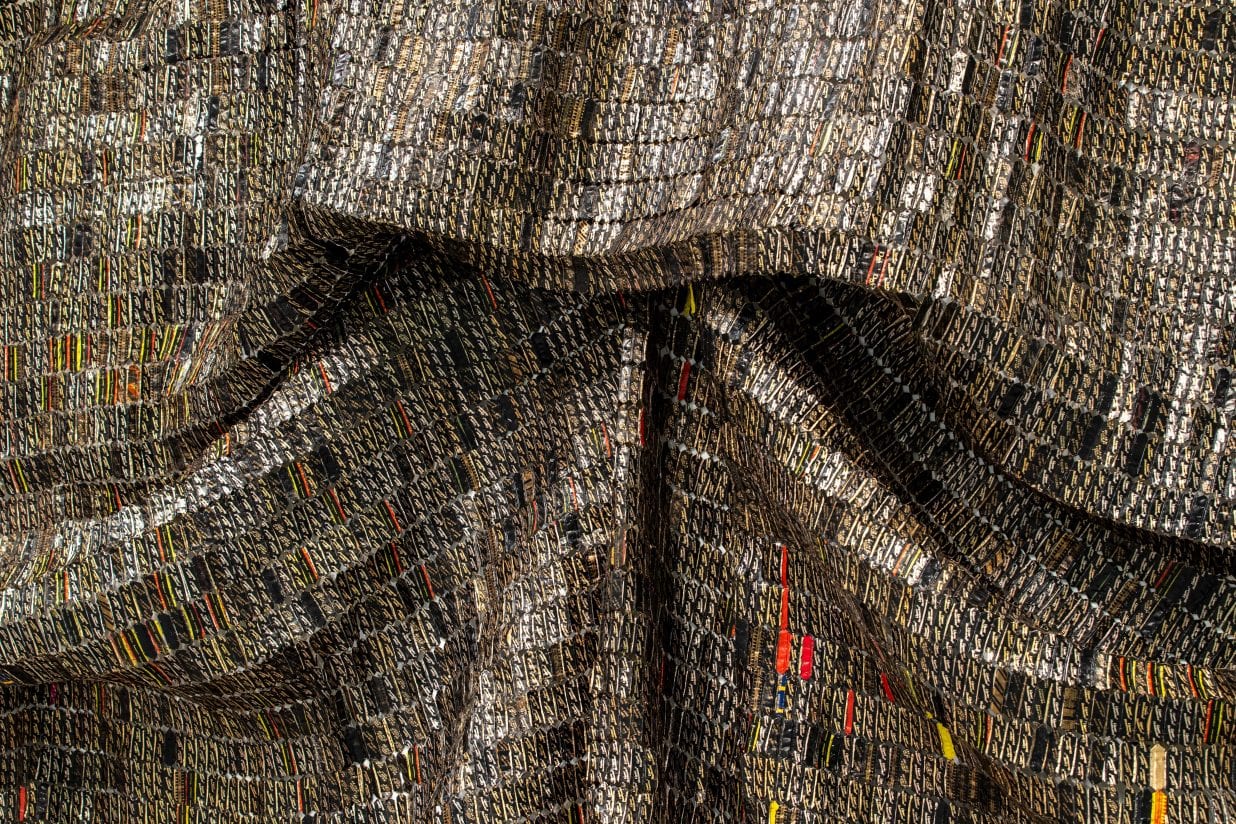 There is only one word to describe Ghanian artist El Anatsui’s work and that is phenomenal. The images, though, do not give his work the justice it deserves. The pictures do imply on the scale and the splendour that a work of that magnitude brings but it does not throw light on El Anatsui’s clever use of materials and labour and most importantly it is not a reference to the significance the artist had in putting the spotlight on African art. Up close, the shiny colourful medallions are no thicker than a visiting card and are held together with tiny fasteners and seem almost fragile to the touch. The material and that interlay, seem to be a metaphor for dialogues between communities, seemingly delicate, the need of the hour and yet mostly unheeded.

El Anatsui’s work is massive, often occupying the full wall in an art gallery or as in Mathaf: Arab Museum of Modern Art, Doha, where they are being shown for the first time in the history of the Middle East art scene, almost two quarters of a room, a wall and another wall perpendicular to it, wrapping the corners in a delicate work of shiny plates, the folds and the pleats making it look like a three- dimensional curtain. 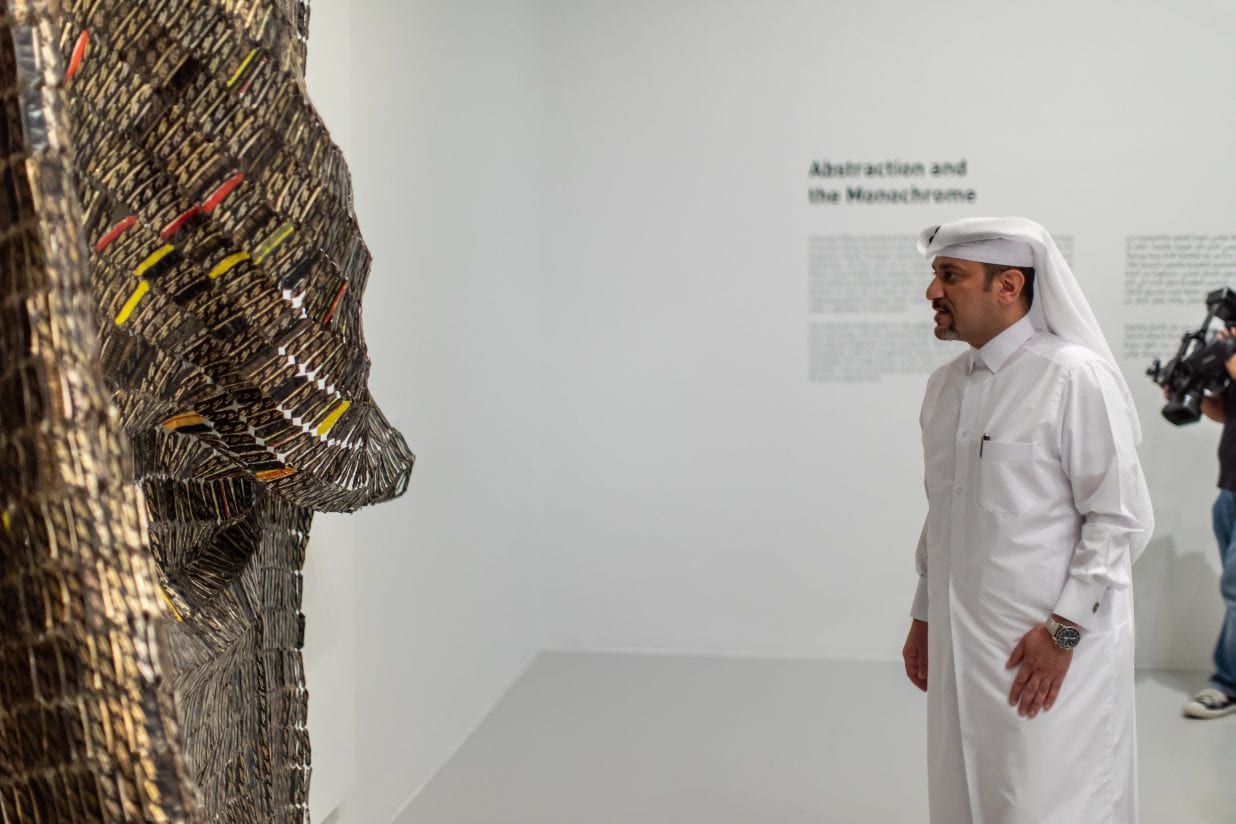 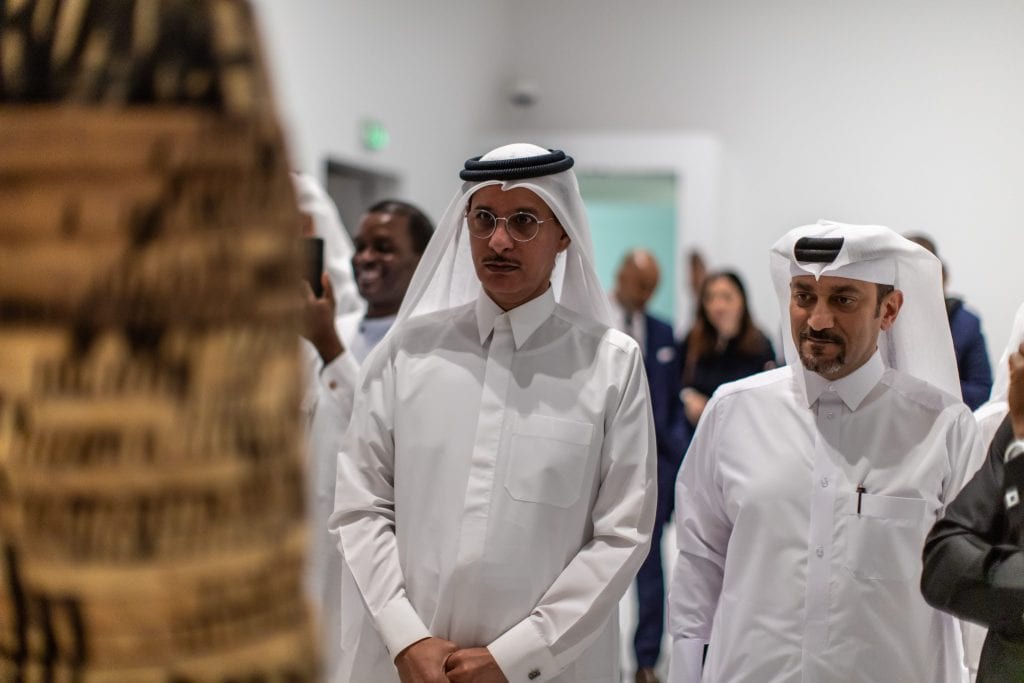 This is perhaps the largest ever survey mounted of the work of Africa’s most prominent living artist. The exhibition was officially opened, by HE Sheikh Hassan bin Mohammed bin Ali Al Thani, and was attended by Ahmad Al Namla, Acting CEO at Qatar Museums, and a number of VIP guests, on September 30.

As the exhibition title suggests, the survey, curated by the late Okwui Enwezor, poet, art critic, art historian, and curator and Chika Okeke-Agulu, Professor of Art History at the Department of Art and Archaeology, Princeton University, focuses on the triumphant and monumental quality of Anatsui’s sculptures.

The exhibition encompasses every medium in the artist’s prodigious 50-year career, including the signature bottle-cap series developed over the last two decades, wood sculptures and wall reliefs spanning the mid-1970’s to the late 1990s; ceramic sculptures of the late 1970s, as well as drawings, prints, and books. 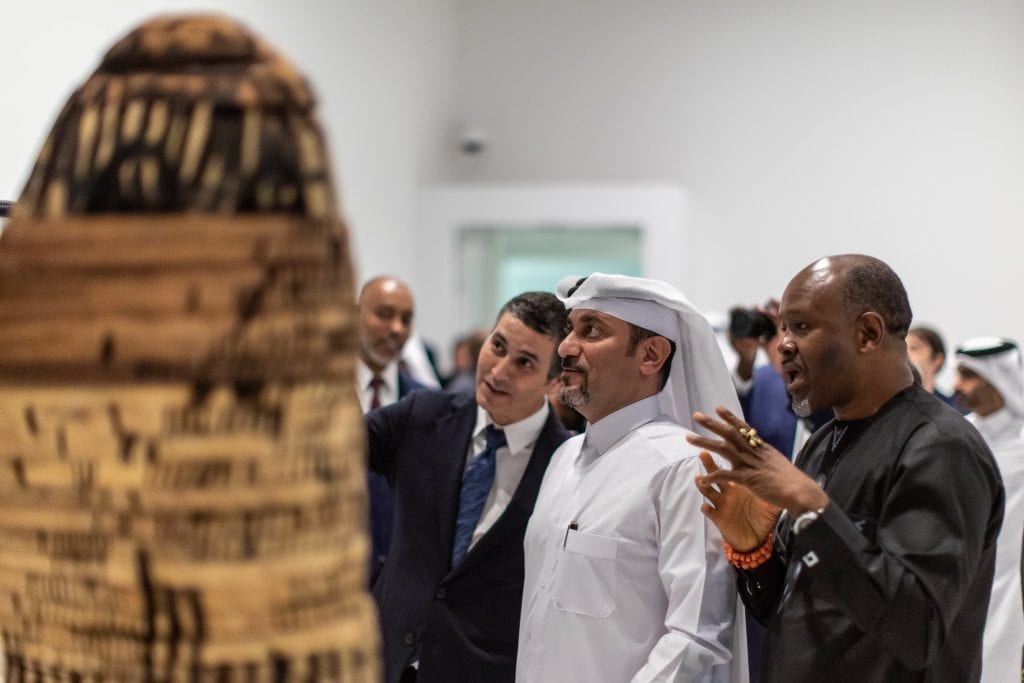 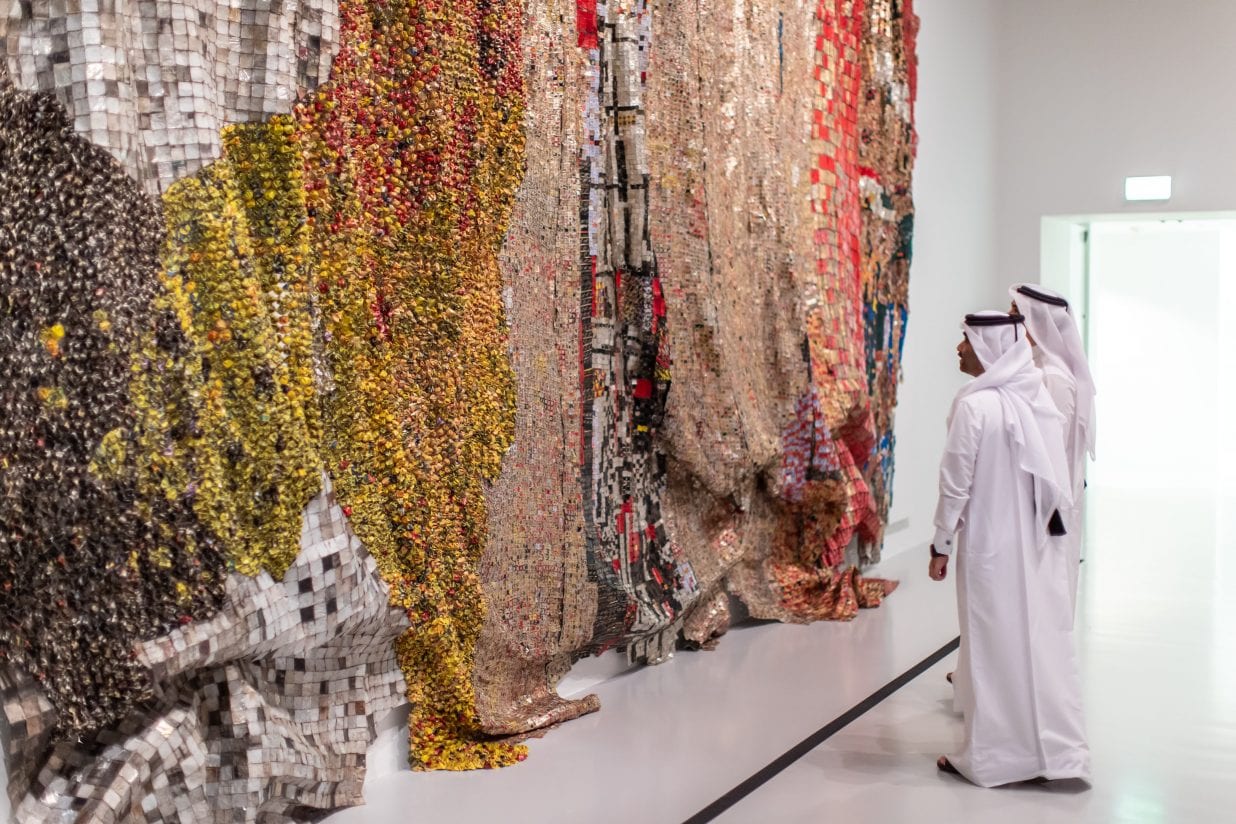 The sheer magnitude of Anatsui’s works and their intricate details stuns all.

What makes this exhibition special to the curator Chika Okeke-Agulu is that this was the last project that he worked on with co-curator Enwezor before he died a few days after the show opened in Haus der Kunst, Munich, but one that Enwezor could not see due to his deteriorating health. Enwezor, who more than any curator in the last 30 years, broadened and globalised contemporary art with large-scale exhibitions that displaced European and American art from its central position. He was the director of Haus der Kunst till he left it a year back, and it is from this Museum that the exhibition has travelled to Doha and from here it will travel to Switzerland and in each of the venues the work will be different.

And that is what makes El Antasui’s work phenomenal, the fact that it is not just the individual artist’s imagination that has authority over his work but also the curators’, the collectors’, who have to deal with his work, make an impact. In spite of their composition or because of it, these works allow seemingly endless numbers of configurations for their display. Each reinstallation reveals a fascinating new arrangement of both dynamic and chromatic relationships. 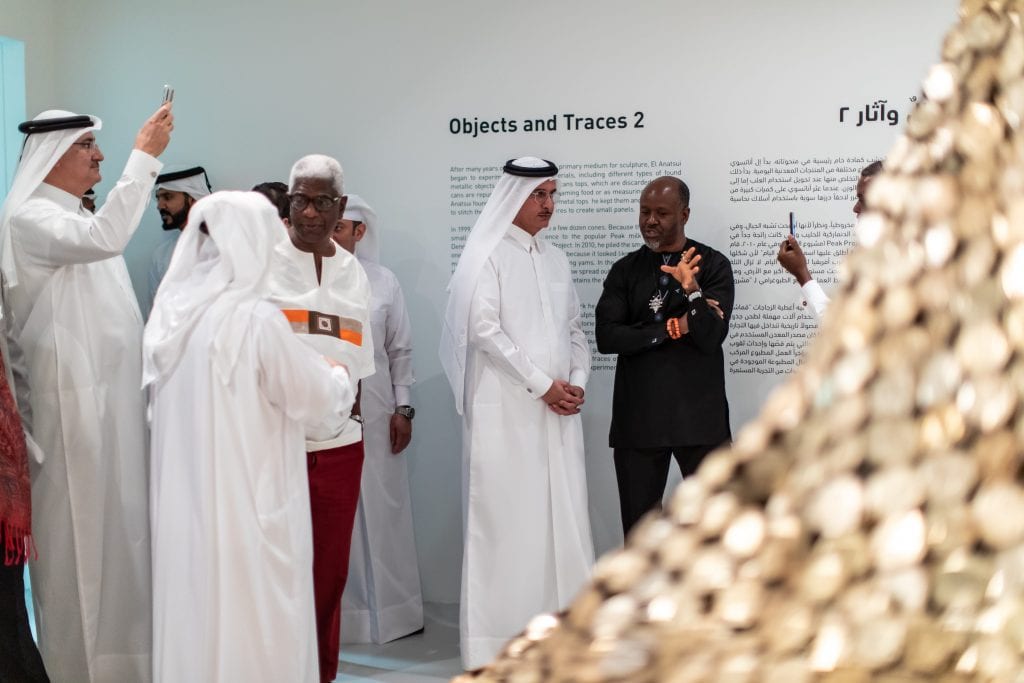 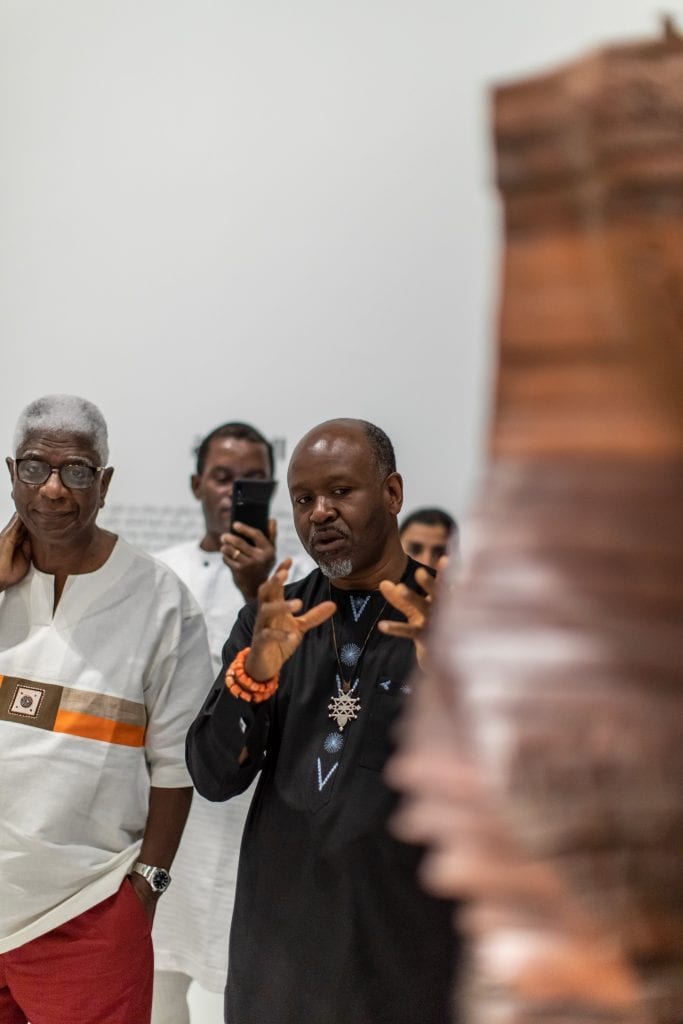 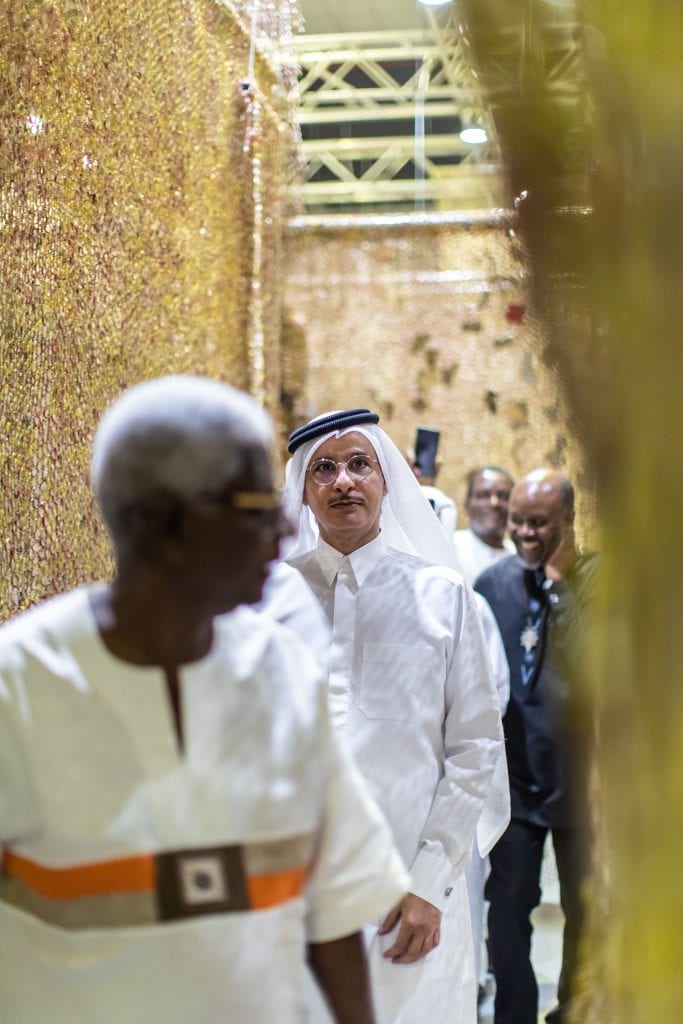 Explaining why this was one of the most special exhibitions he had ever curated, Okeke-Agulu says, “It was a homage to an artist, who was my teacher in art school, my studio master for a few years, a colleague when I was teaching at the University of Nigeria and an artist, that from the moment I left art school influenced me and I started curating exhibitions involving his work many years before he would catch the attention of the global art scene. For me, personally, this was a journey that was long in coming, a dream that we both had dreamt of.”

The title, as suggested, wants to reference this show not as a perspective of El Anatsui’s work but, as Okeke-Agulu explains, “as a series of arguments of his relationship with form and material and his studio process rather than an excuse to invest in his biography or cultural background which is often what you find in a discourse around artists’ from outside of Europe, it is almost as if it is from where they come from or what religion they follow that made all the work possible. This is an arrangement of what we believe is the most important element of his practice as a sculptor. Our insistence is that El Anatsui is hardly present and what is present is his work and the form of protocol that made this work possible. An artist who had a very intimate relationship with his studio, the studio processes, the materials he has worked on.” 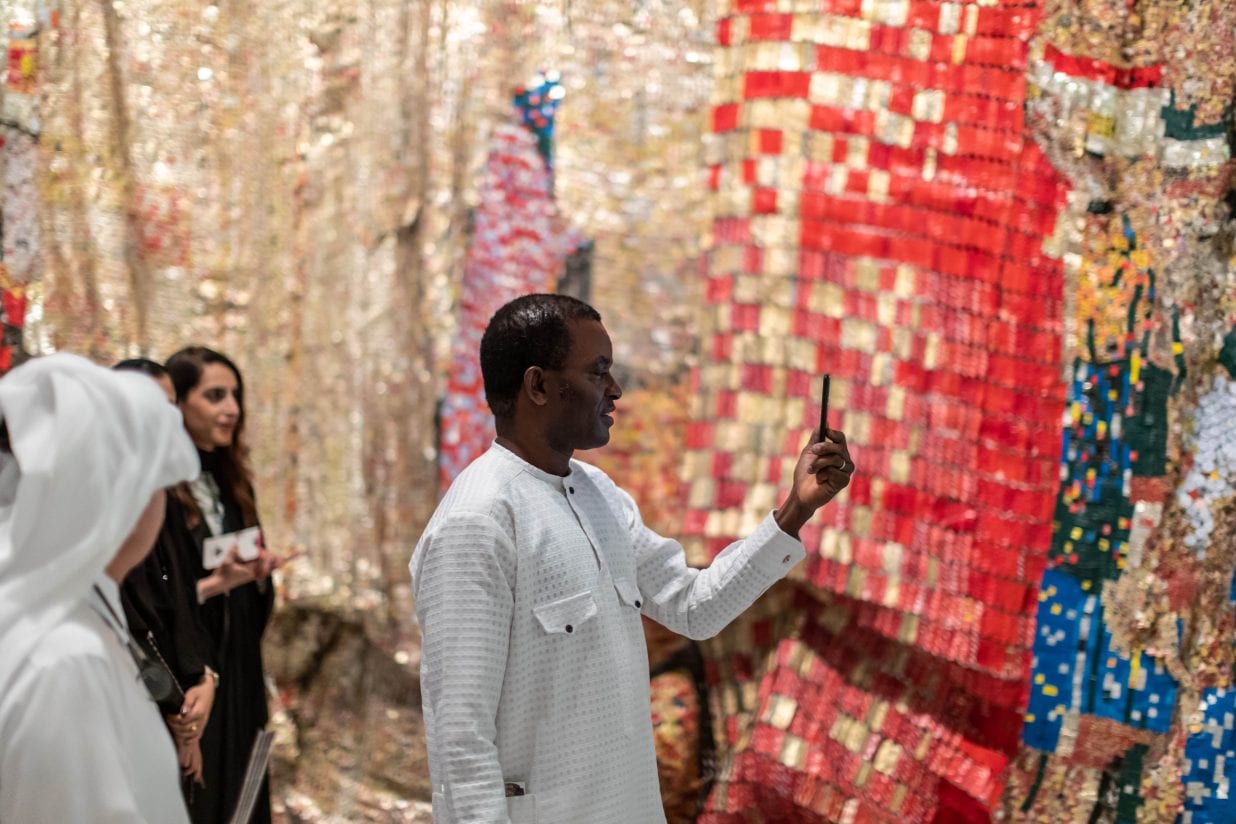 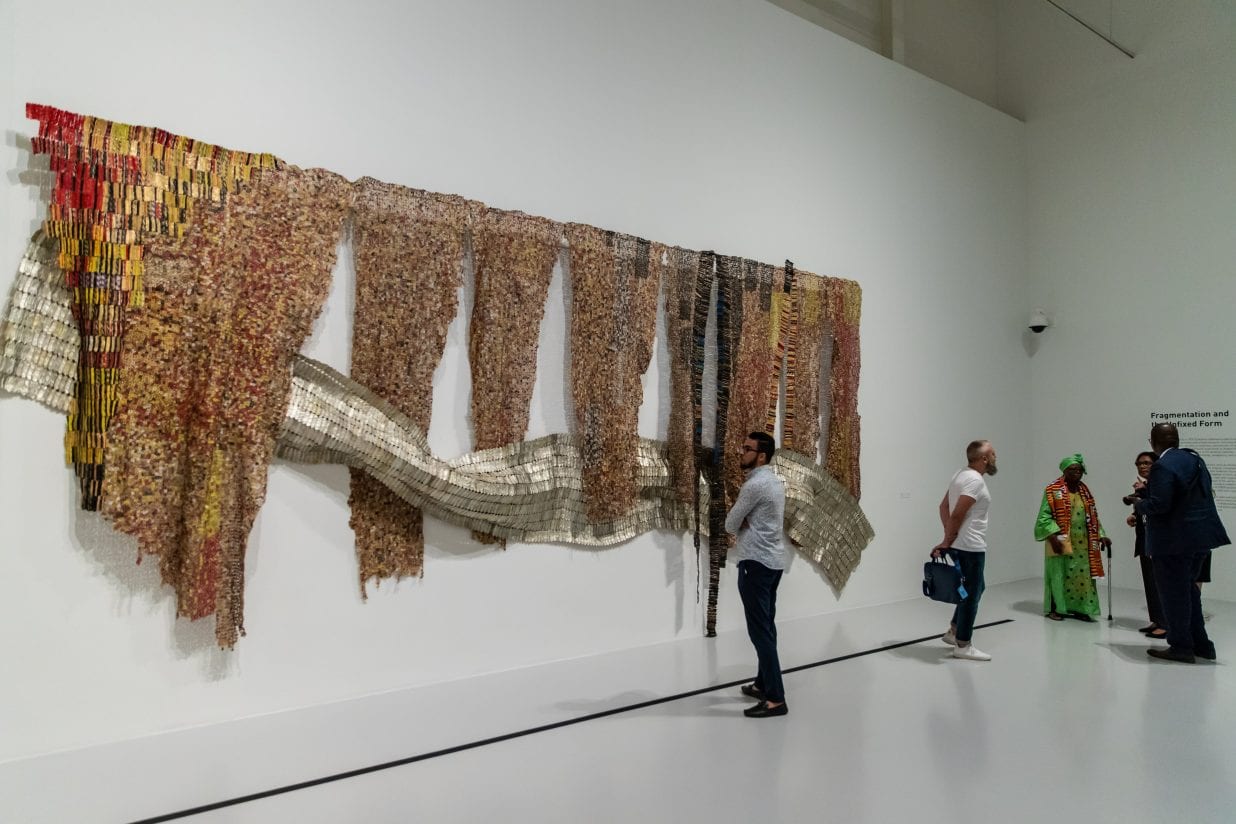 “The very idea, of Triumphant Scale, is to focus not so much on the size of the works but the character of the works in themselves that has elements of self-assurance in the way it occupies the space it is given, a very metamorphic quality that is so organic regardless of its size. His rigorous work derives its essential character when it is expressed on a large scale and the work itself is able to combine the delicateness of a small-scale work through its many intricate pieces and the momentousness of the size of the sculpture. This ability to combine both these diverse qualities in his work is El Anatsui’s characteristic.” 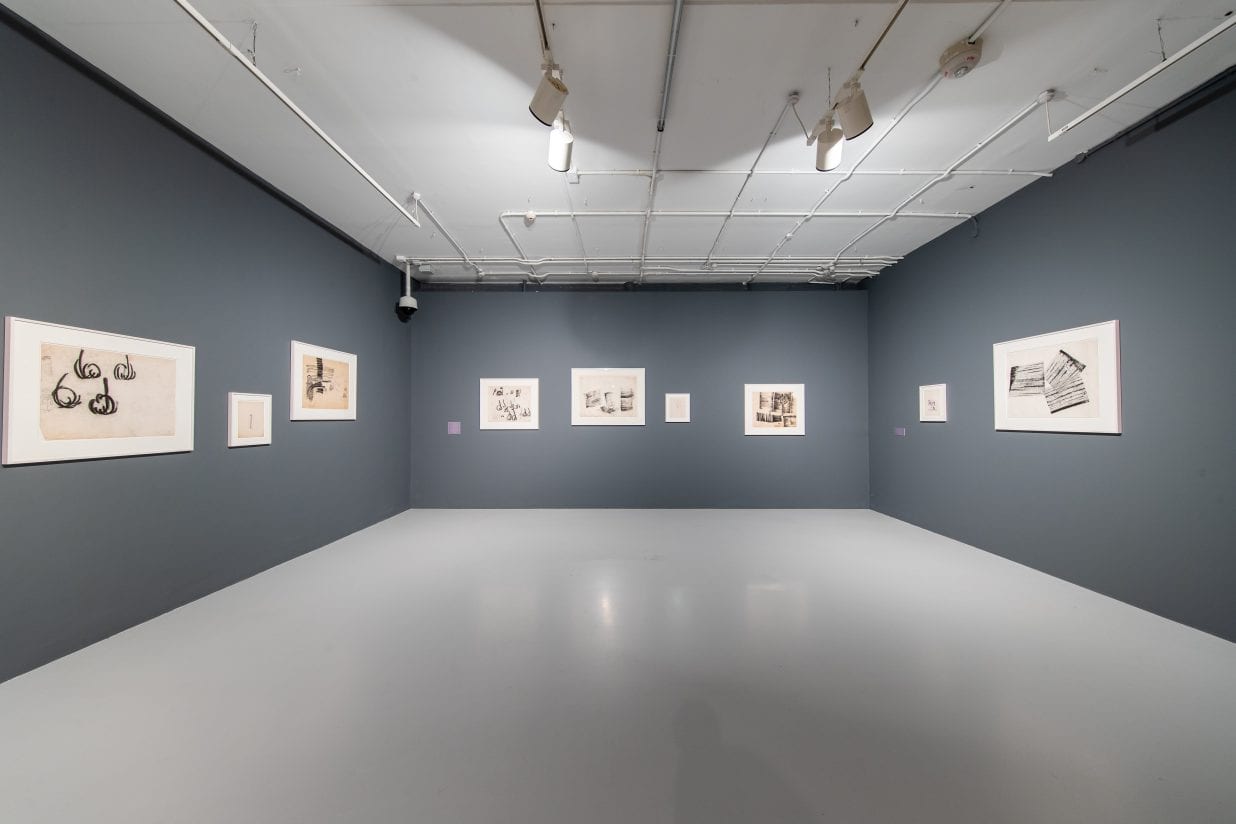 El Anatsui has consistently worked to transform the formal possibilities of African sculptural idioms. Over 50 years, he has repeatedly revised and reinvented his material and compositional techniques to astonishing effect – from the early smaller wooden reliefs with their incised markings and broken ceramic forms, to the monumental outdoor cement sculptures, and, more recently, the vast and spectacular metal wall and floor works, which blur the boundaries between sculpture, painting and assemblage. 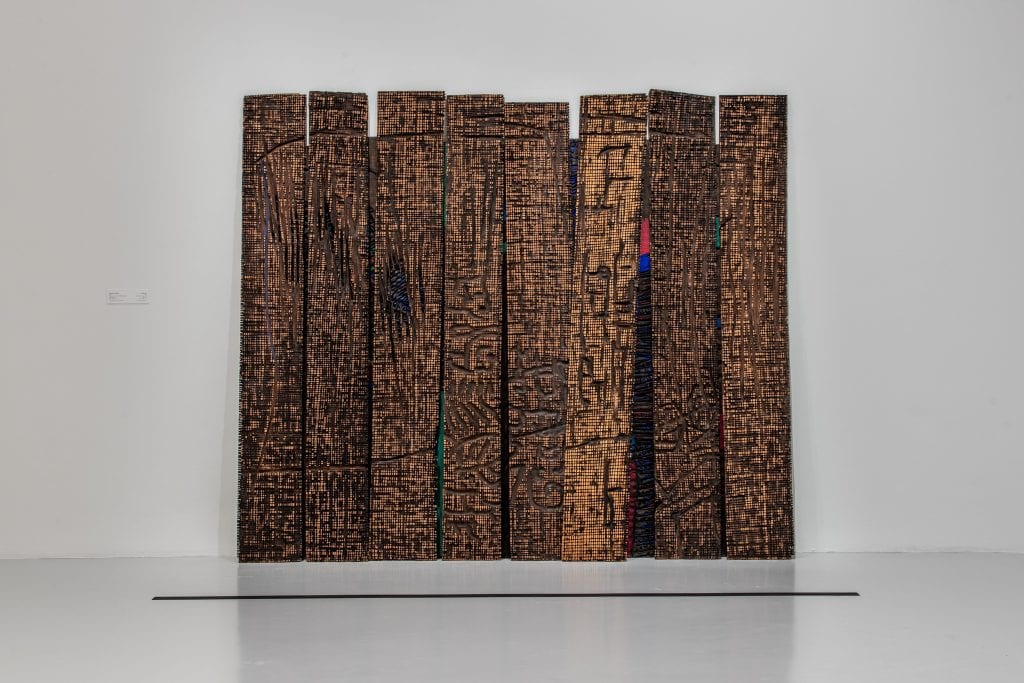 Invitation to History, 1995, wood and tempera, courtesy of the artist and Jack Shainman Gallery, New York 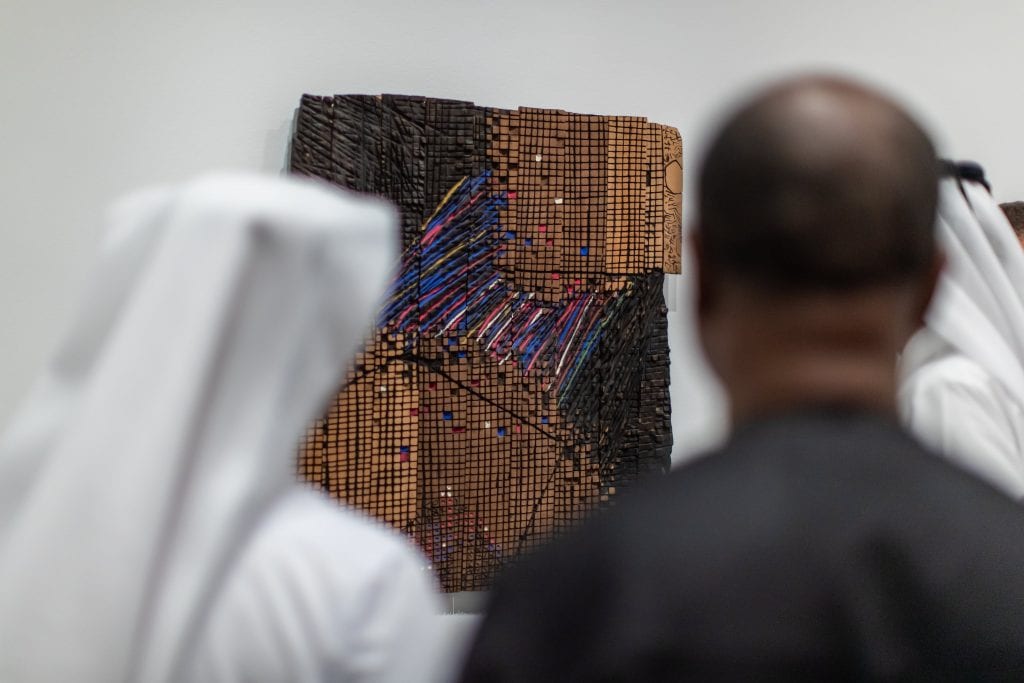 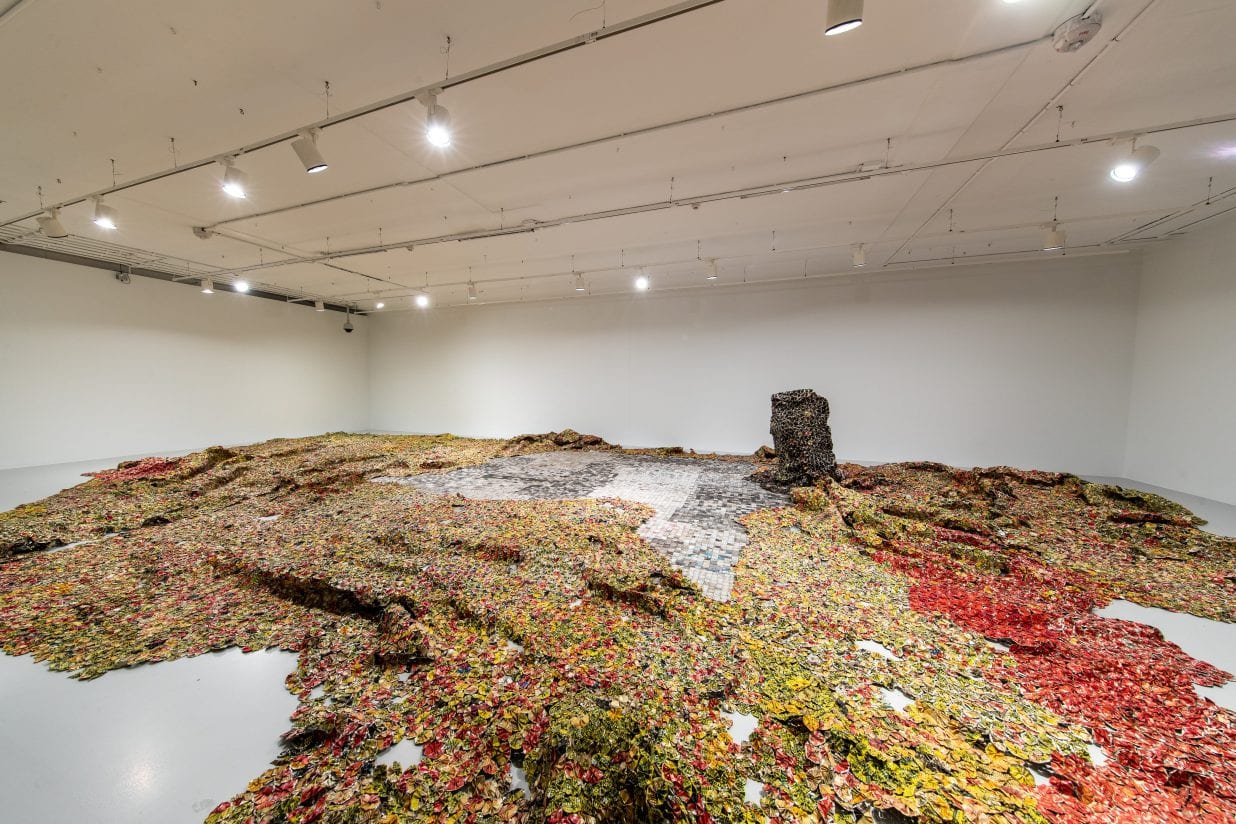 El Anatsui’s work has to be seen beyond the humungous forms they constitute and as fragmented forms that have moved on as an experiment, from wood to ceramic and then concrete to metal. And if he has moved on from one form to another, it expresses his restlessness in learning and experimenting with materials. The artist generates meaning out of his material and technical process. For example, the bottle caps come from hard liquors introduced by Europeans as currency – and thus a means of subjugation – during the era of transatlantic slavery and colonisation. The process of cutting, flattening, squeezing, twisting, folding and stitching together with copper wire thousands of these bottle caps into a single work, speaks to the making of human communities out of connected individual subjectivities. 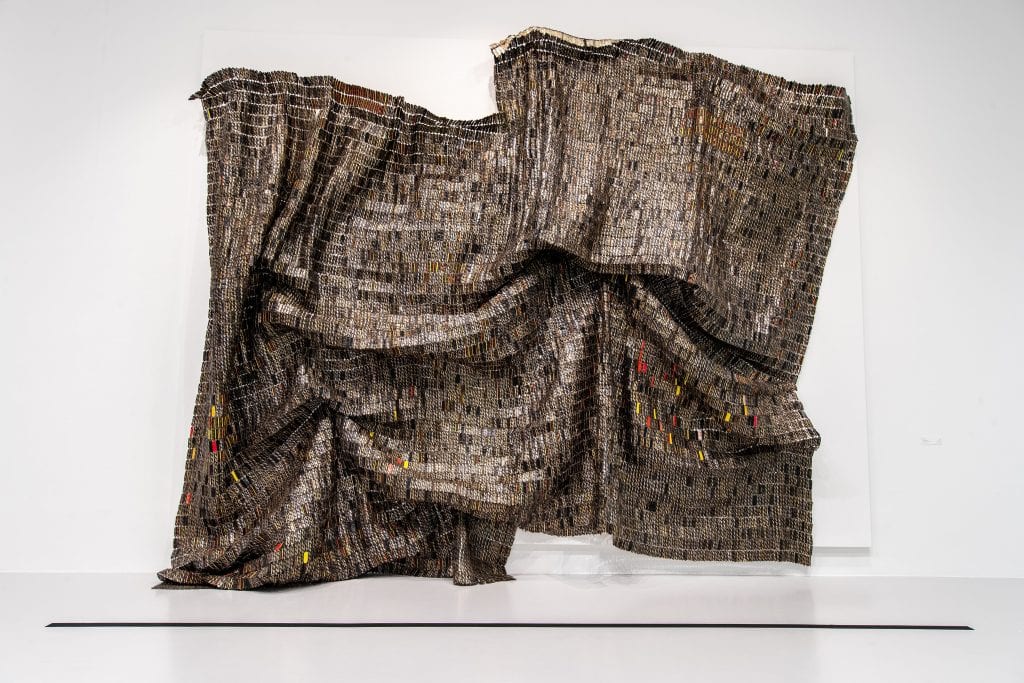 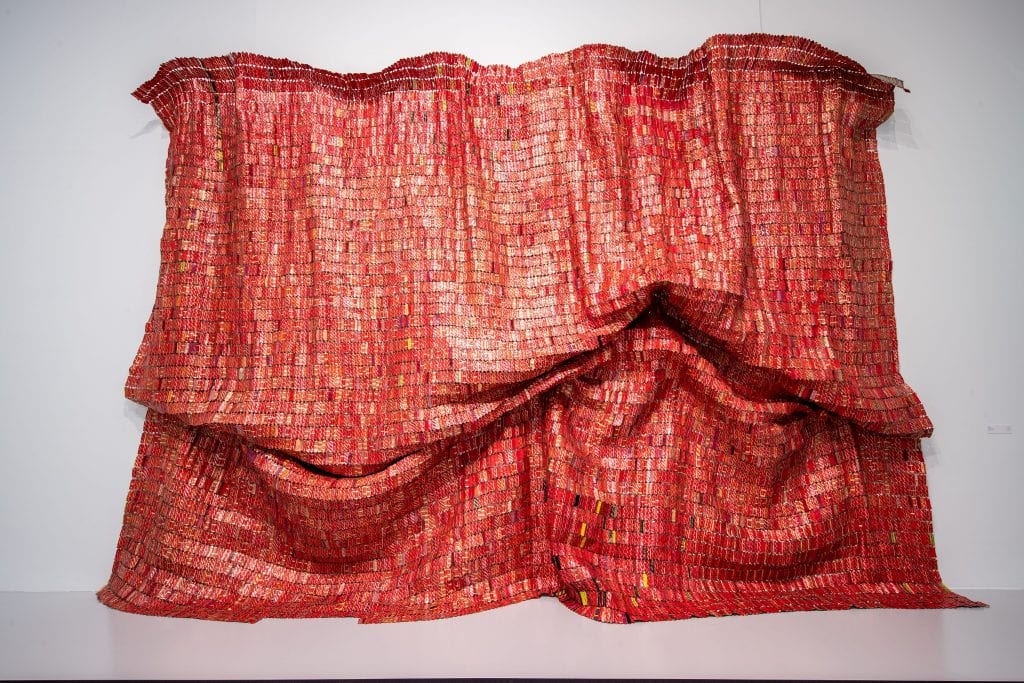 The exhibition is spread across ten separate gallery spaces in Mathaf.  Amongst the works is Logoligi Logarithm, a specially created installation for the gallery’s performance space. Structurally related to his 2010 work Gli (Wall), in this complex site-specific work, the diaphanous form is achieved through the stitching patterns developed by Anatsui and his assistants using thin bottle cap seals. Logoligi Logarithm’s alluring play of light and material recalls the refraction of sunlight in a mist or fog. The work is dedicated to the Ghanaian poet, Atukwei Okai, who died in 2018. 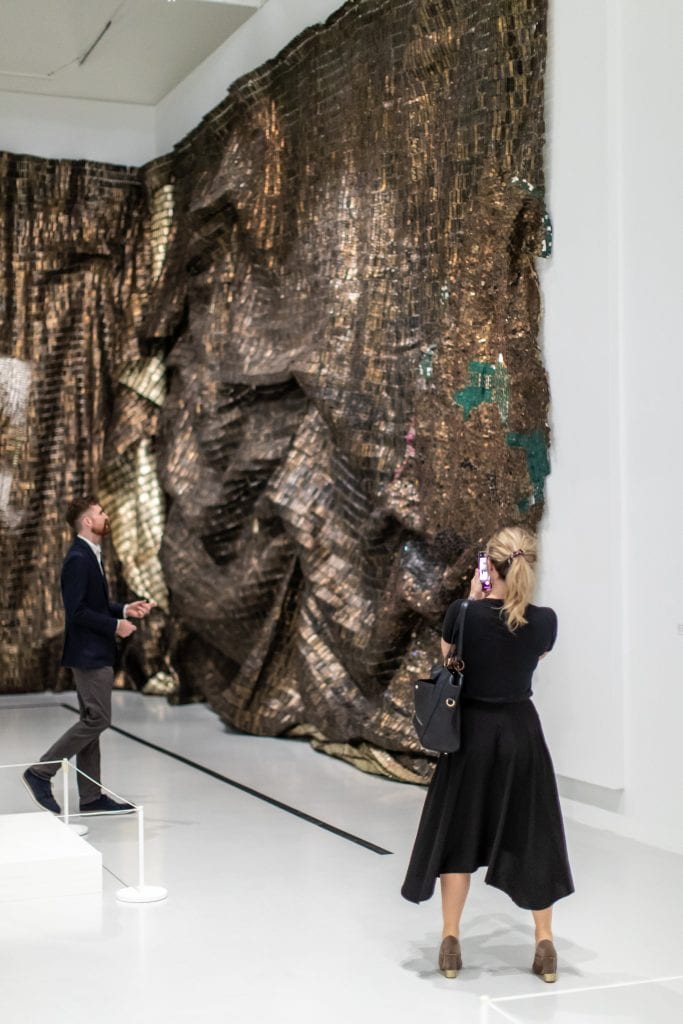 We, those who live in Doha, are indeed fortunate to have this work of wonder at our doorsteps, and the fascination was visible on the faces of all visitors invited for the opening of the exhibition. From the intricate hand etchings on wood, to the large curtains of workmanship in metal, to black prints whose abstracts traces are formed by stencils taken from the wooden benchtops upon which Antasui’s studio created the bottle top sheets, each of Anatsui’s work has a deep meaning and a relationship with the material that is explored.  After years of having those metal units folded, pressed and conjoined on top of them, the surfaces of those small tables developed a rich patina from the effect of continuous scarring, and that makes us reflect on each of our actions, the beauty of the scar attained to reach that state.

This exhibition organised by Haus der Kanst, Munich in collaboration with Qatar Museums is on show till January 31, 2020 at Mathaf, Arab Museum of Modern Art.