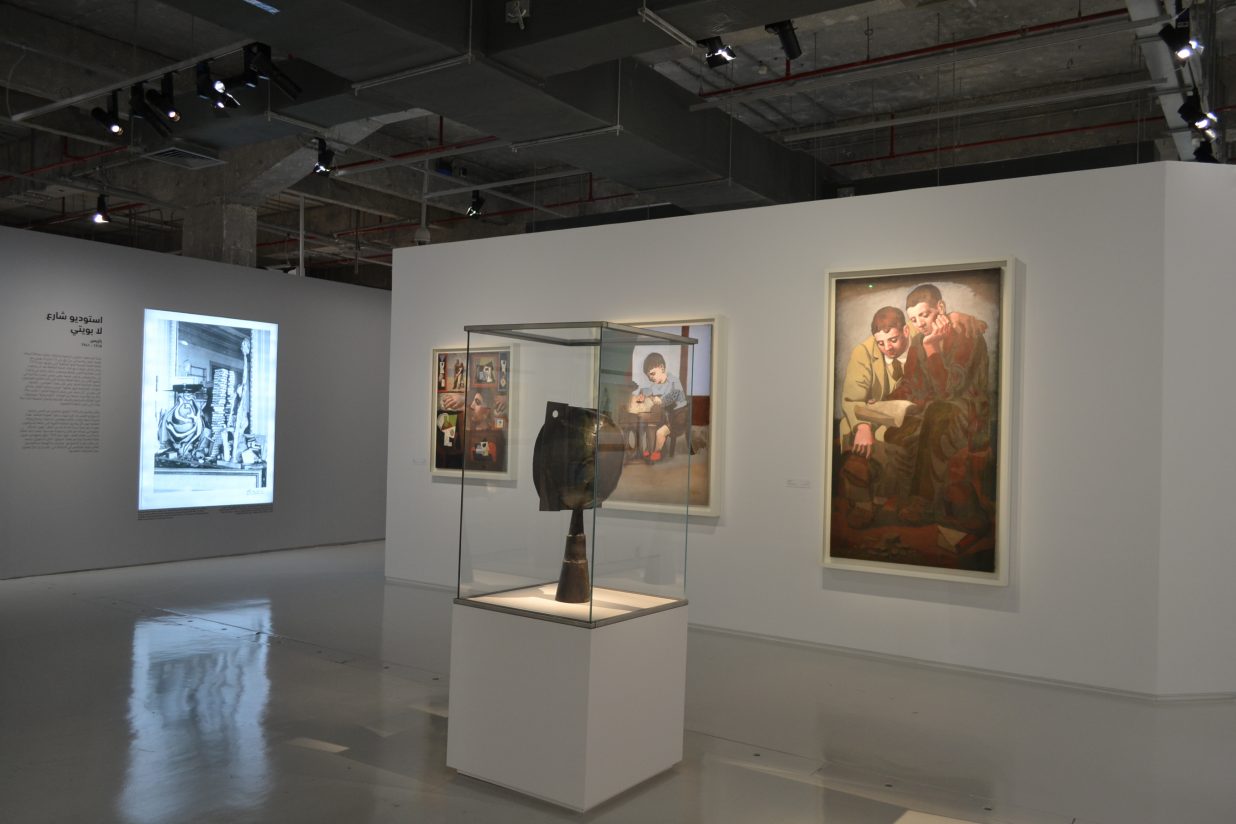 A rare collection of around 108 artwork of Pablo Picasso titled Picasso’s Studios is ongoing at the Fire Station Museum, Garage Gallery. SCALE engages with the curator of the exhibition to try and understand the wide variety of work created by this modern artist. By Sindhu Nair 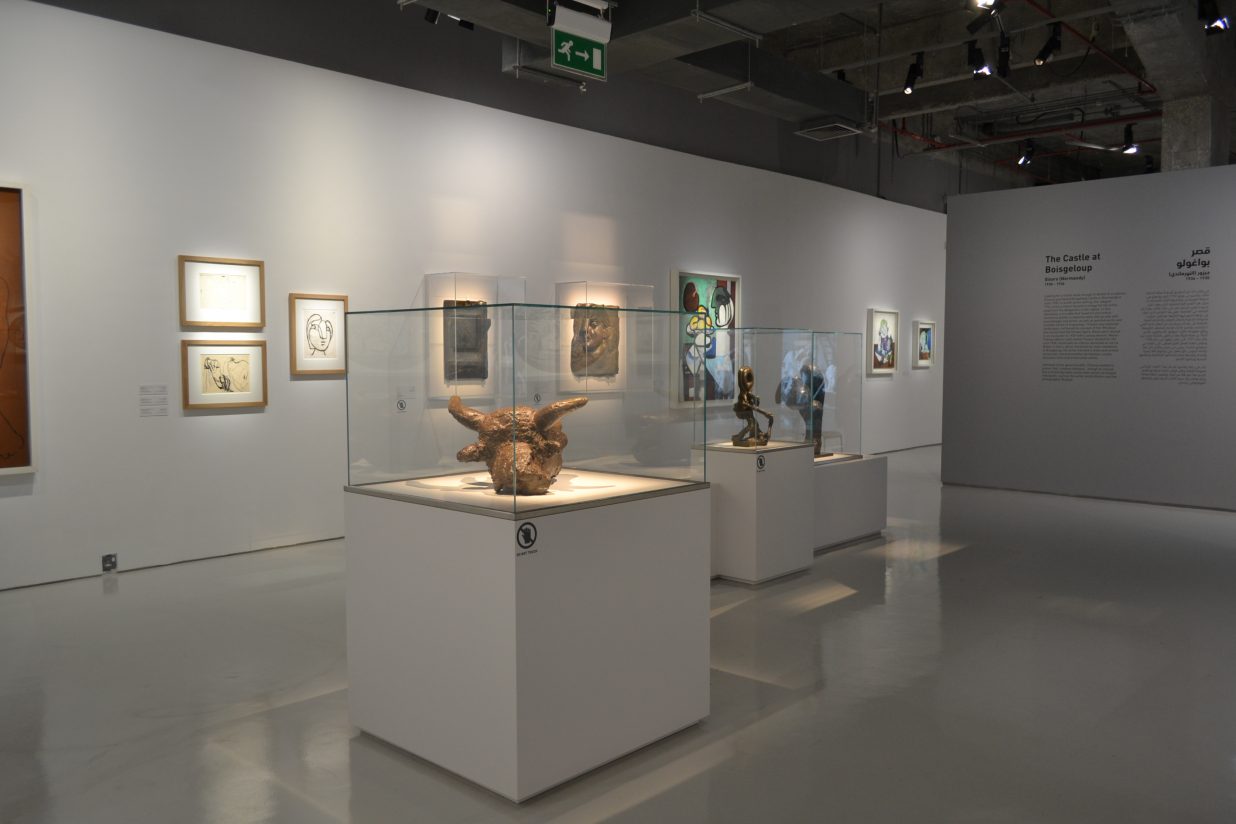 The studios where the artist worked were the stage where Picasso revealed and curated himself. The exhibition at Fire Station is curated around the various studios of the artist, each revealing its influence on his art.

The works of Pablo Picasso are complex at best and intriguing at the very least. To reveal that one does not appreciate or understand his work is similar to perpetrating an art crime. And to all his skeptics, Picasso had a response, “Everyone wants to understand art. Why not try to understand the song of a bird? Why does one love the night, flowers, everything around one, without trying to understand them? But in the case of a painting people have to understand.” There is no question that Picasso’s art had a most profound impact on the 20th century for here was creativity that was unbound, that talked of freedom of expression in ways that were unconventional, yet always revolved around reality always being a reflection of the artists’ life, his lovers and what he saw around him. That this world-renowned artists’ 108 original works are being shown in Qatar, is to have a glimpse of the life and the techniques behind the works of this genius, and is a treat for all art lovers in the country. 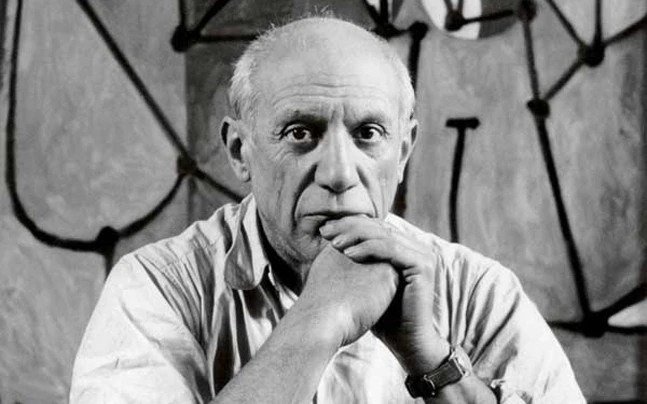 “Picasso is indeed mainly known as a painter, but he was also a sculptor, a draughtsman, a photographer, a ceramist or even a poet.”

Qatar Museums reopened the Fire Station: Artist in Residence on July 1 and unveiled this special exhibition, Picasso’s Studios in the Garage Gallery The exhibition artworks by Pablo Picasso selected from the unparalleled collection of the Musée national Picasso in Paris, including paintings, sculptures, drawings, prints, and ceramics. All the works at one time belonged to the artist’s personal collection before it became part of the Musee. This collection on view through November 1, 2020, traces the evolution of Picasso’s epoch-making art by presenting it in eight distinct galleries, representing the series of studios where he worked throughout his career. The artworks are grouped to recall the places in which each of them was created and gives us a glimpse into Picasso’s life as we find how he keeps innovating in styles or art forms, and materials, from paintings to sketches to sculptures in metal and wood, for he believed that artists should never do what people expect of them.

Spanning works of the artists from eight decades, from Picasso’s arrival in Paris in 1900 to his final years on the Mediterranean in the 1970s, the exhibition is part of the 2020 Qatar-France Year of Culture, a Qatar Museums initiative dedicated to building bridges between the people and institutions of these two nations. 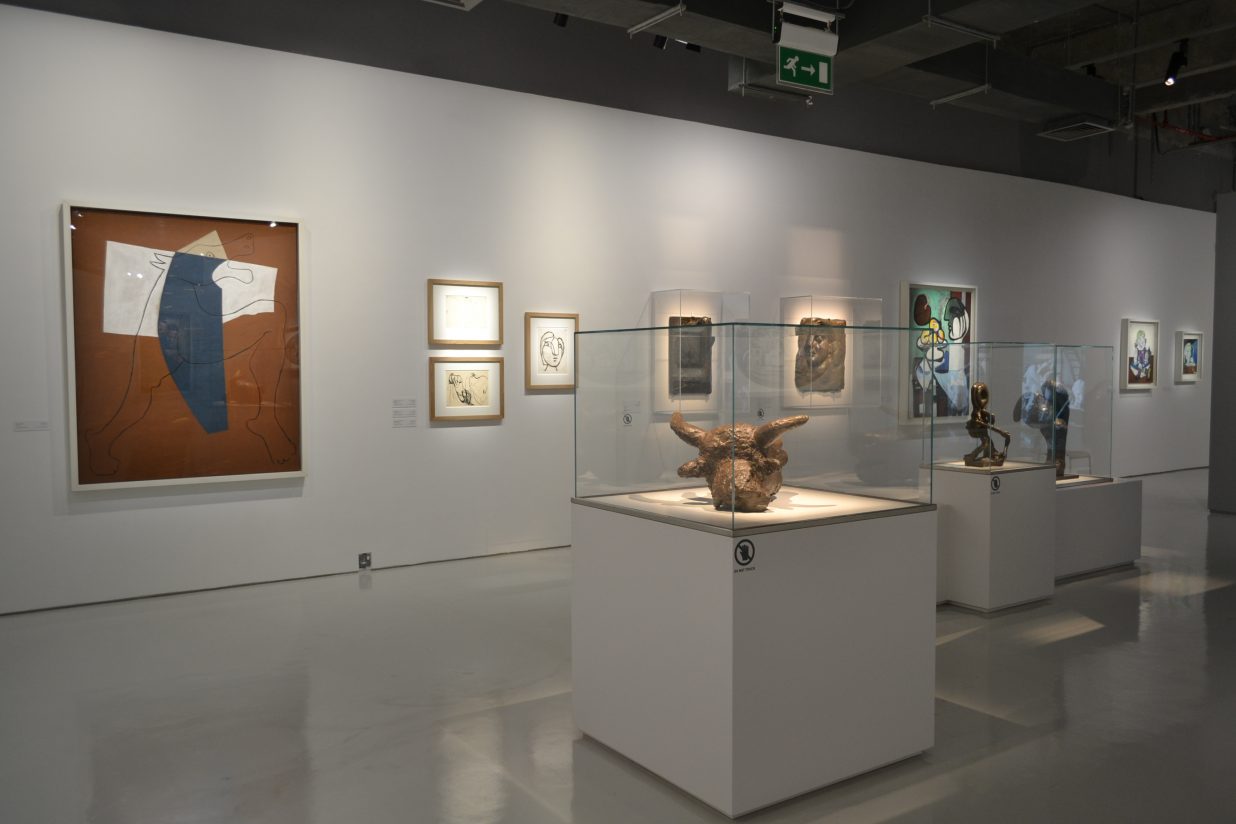 Picasso explored landscapes, furthered his concept of the Minotaur, and researched the female figure, as seen with the collection. 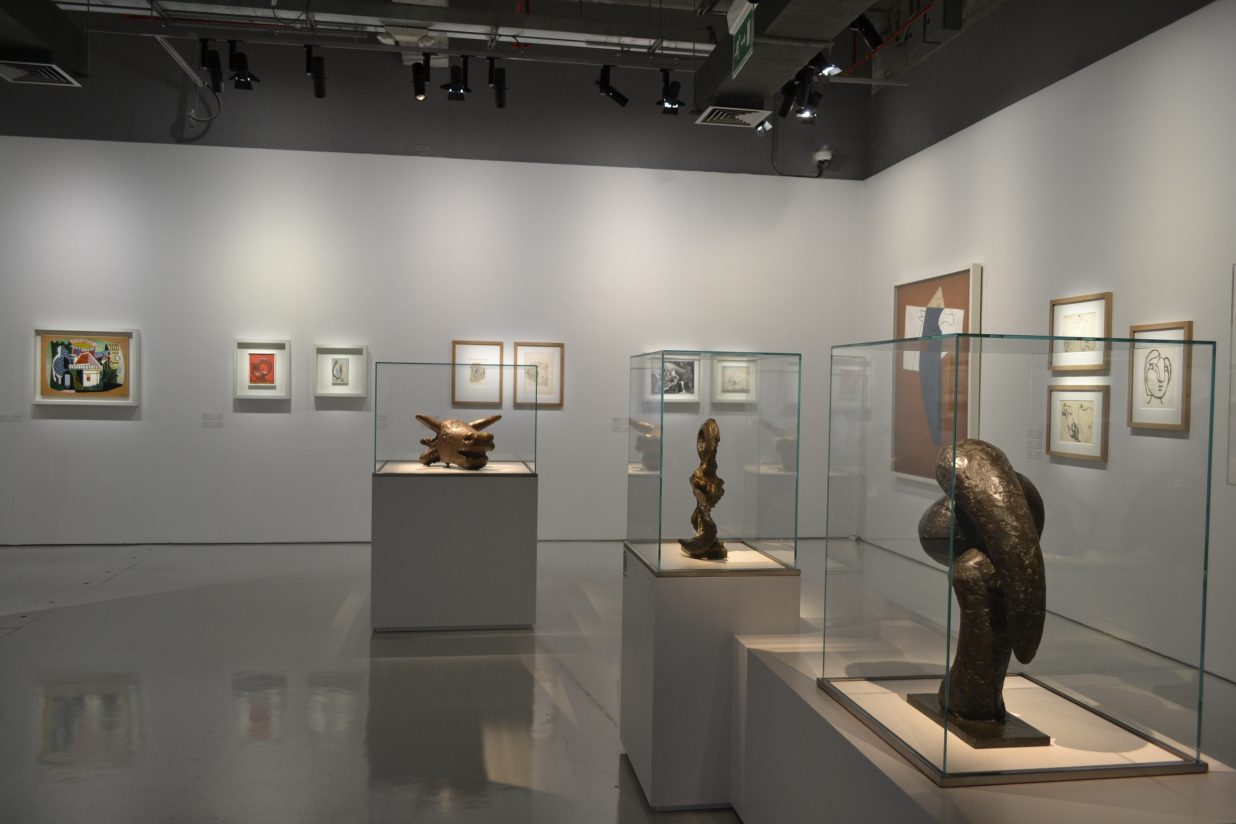 Picasso’s Studios is curated by Virginie Perdrisot-Cassan, Curator of Paintings (1921-1973), Sculptures and Ceramics at the Musée national Picasso-Paris. She says, “It is undoubtedly in the totally liberated use of materials and techniques that Picasso is most innovative. The exhibition brings together a wide variety of techniques and focuses on the creative processes that took place in each of the studios he worked in.” 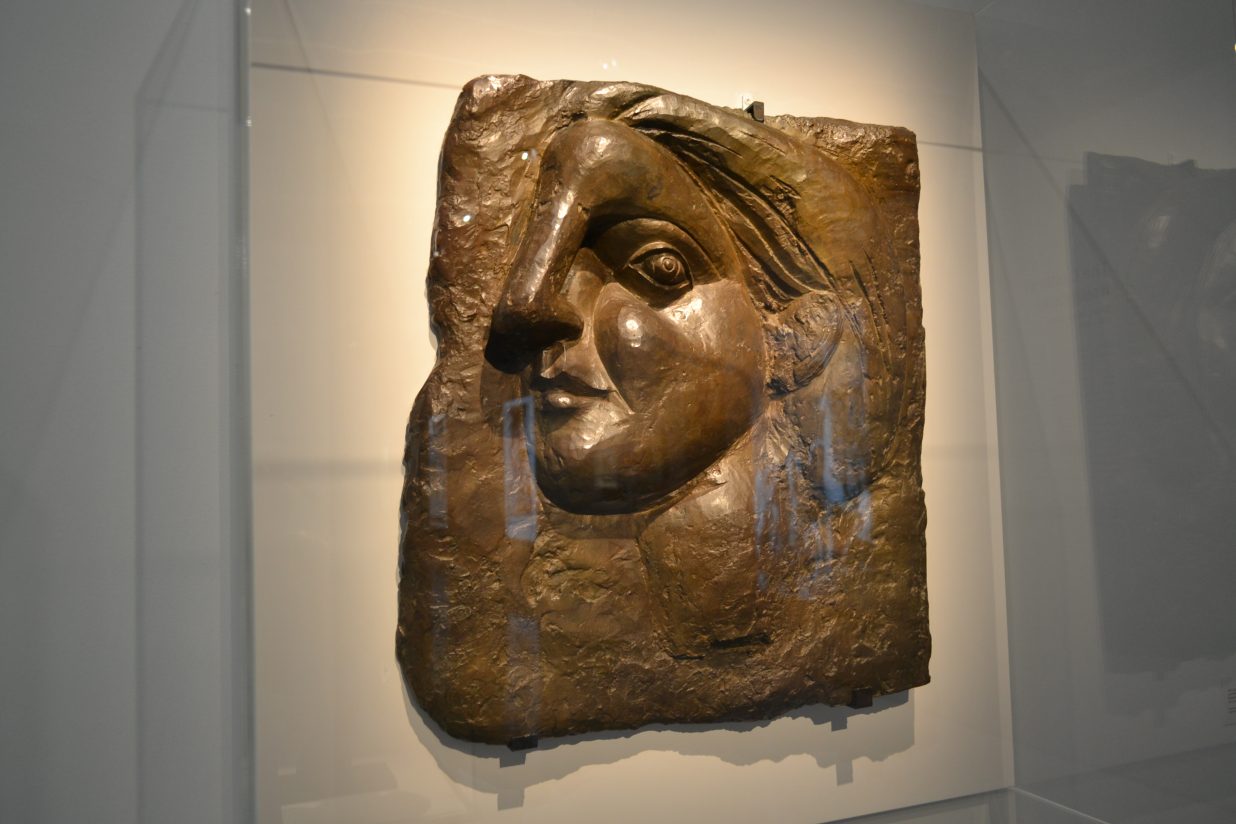 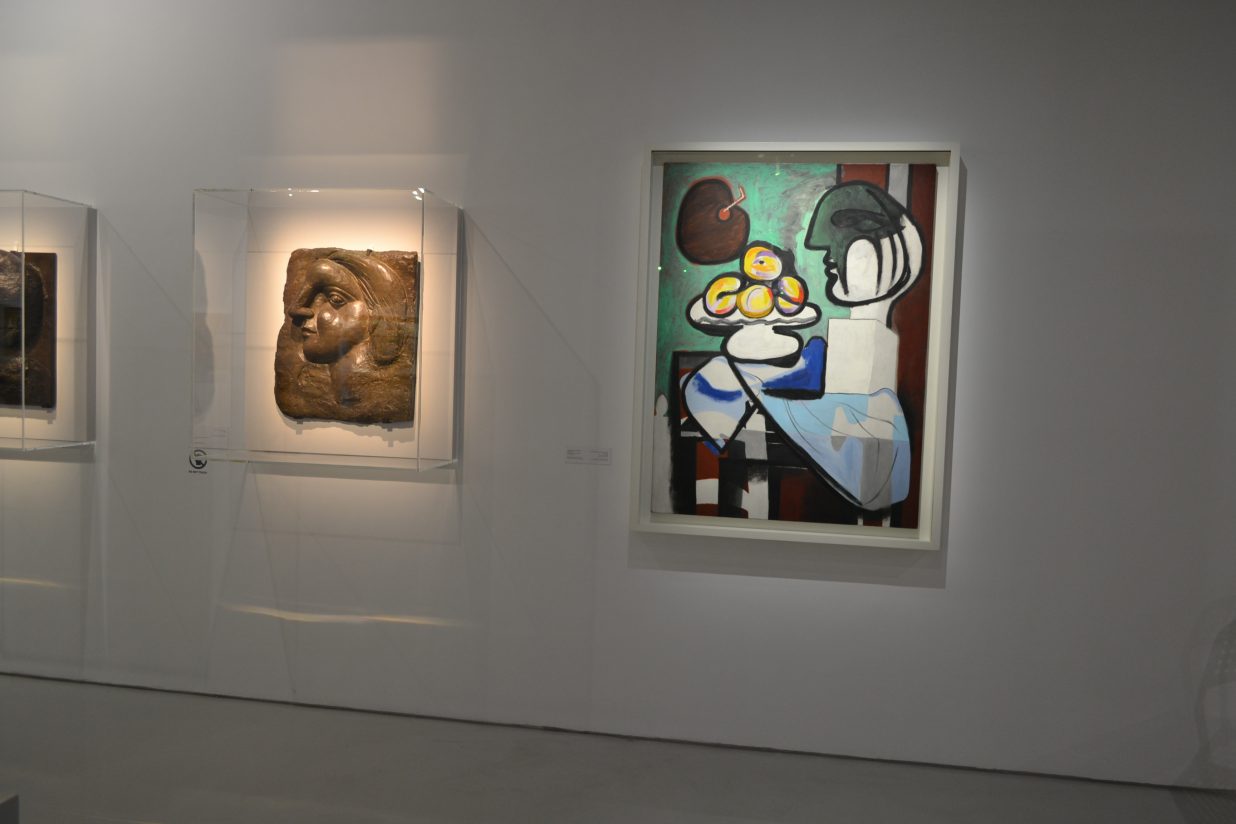 Picasso was highly influenced by all of the women in his life and he has used each of them as his muse.

SCALE had an exclusive interview with the curator to gain an insight into the artist who has always straddled controversy in his life as he had courted freedom, unpredictability, spontaneity and intuition in his creative output.

SCALE: Tell us about your fascination with the maestro Picasso?

Picasso is a prolific artist, who transcended all techniques. His work is an inexhaustible source of analysis and research. My main interest was in Picasso’s three-dimensional work, which André Breton described as “extra-pictorial”. Picasso is indeed mainly known as a painter, but he was also a sculptor, a droughts man, a photographer, a ceramist, or even a poet. And it is undoubtedly in the totally liberated use of materials and techniques that Picasso is most innovative. The exhibition brings together a wide variety of techniques and focuses on the creative processes that took place in the studio. 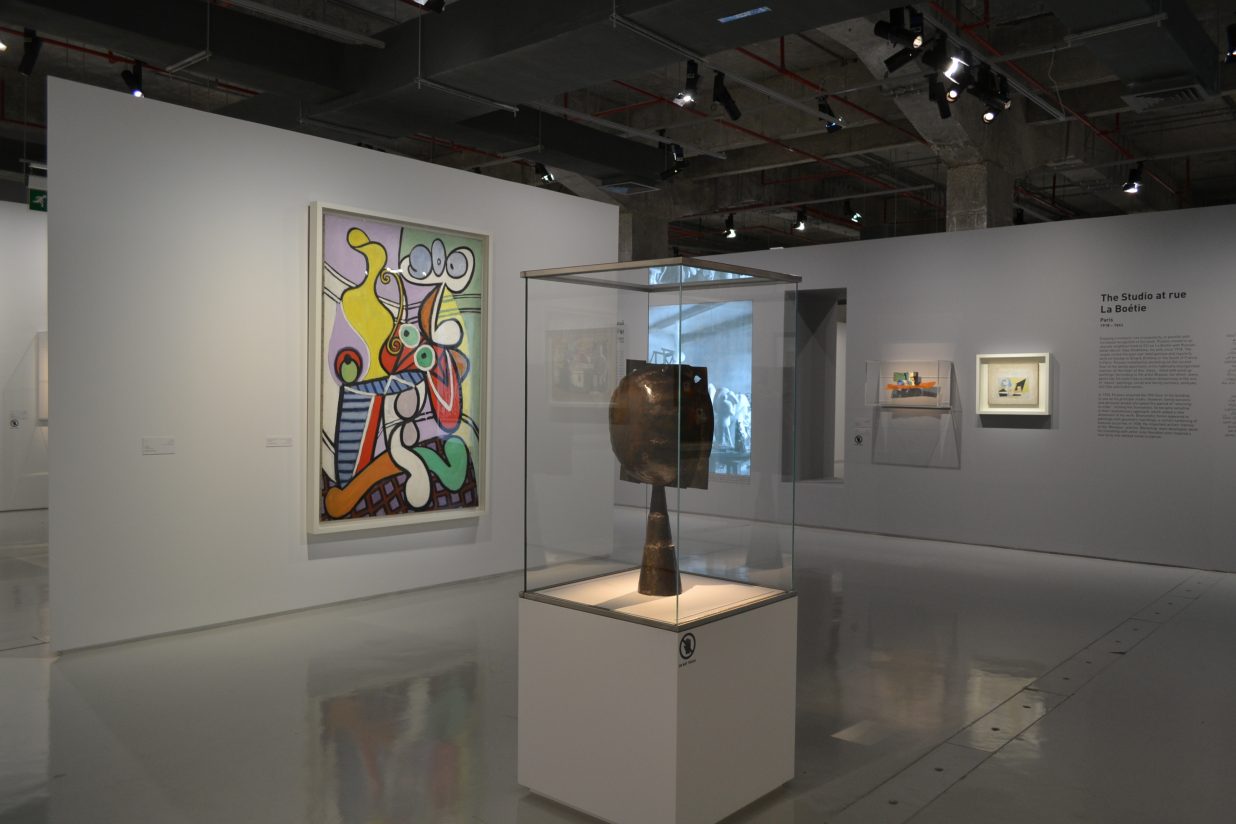 SCALE: What is the curatorial process that you have adopted for Qatar?

The exhibition is chronological and is constructed according to a selection of 8 workshops occupied by Picasso from his arrival in Paris around 1900 until his last installation in Mougins in the South of France, where he died in 1973. The idea is to place the works on display in the context of their creation, the studio, where they entered into dialogue with each other. Each section is built around the evocation of a studio documented by period photographs. 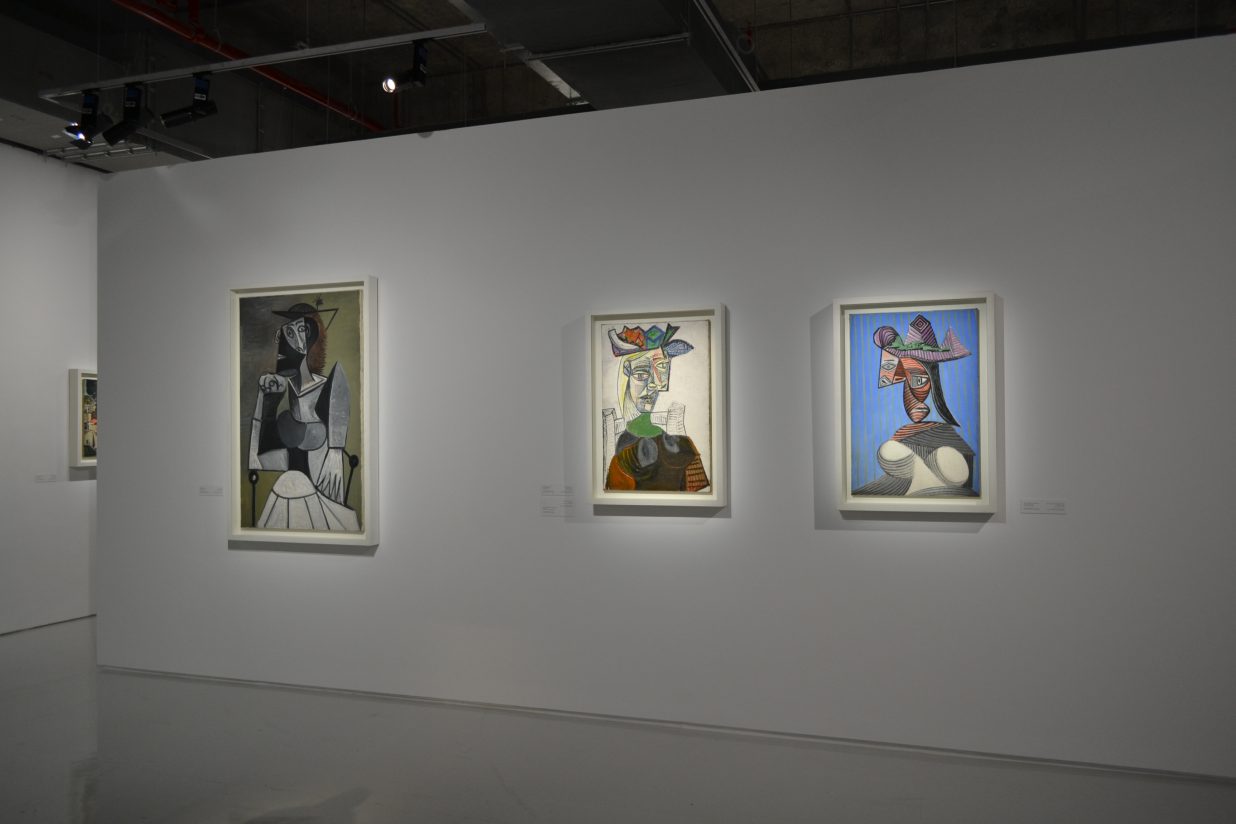 His studios were in a reality a chaotic laboratory filled with his numerous experimentations.

SCALE: Have you kept the exhibition aimed for an art appreciating crowd already familiar with the work of the artist or is it aimed as a historical travelogue with the painter?

The exhibition can satisfy both public of amateurs, as well as a large public, coming to discover the artist. The route offers a spatial, geographical, and temporal journey, as the visitor follows the life of the artist and the different places in which he lived and created. 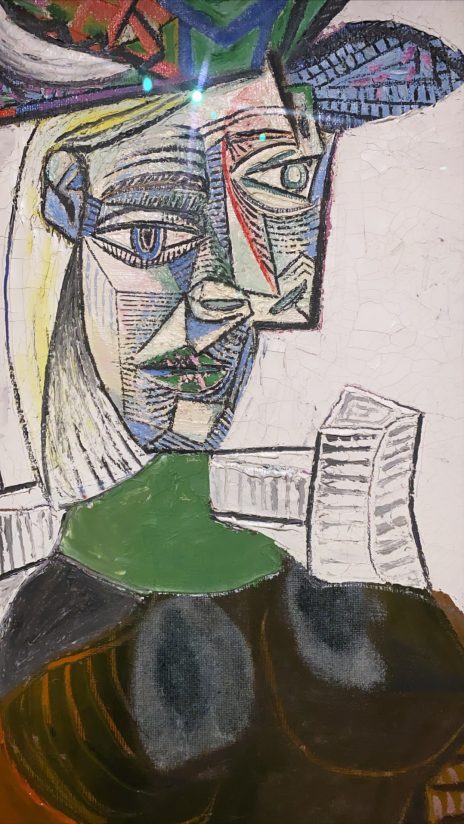 Portrait of Picasso’s muse at Picasso’s Studio. Photography by @aaalthani

SCALE: “Painting is just another way of keeping a diary,” according to Picasso, how true is this with regard to this exhibition.

In the early 1930s, as the first volume of the catalogue raisonné of his work was being prepared for publication, and with a view to his first retrospective exhibition in 1932, Picasso began systematically dating his paintings on the reverse side, in order to leave the most complete documentation of his art for posterity. The studio fonds are another form of an archive documenting Picasso’s art since they provide information both on the context of the creation, but also on the tastes and habits of the artist, who liked to surround himself with his collection and a clever mess when he painted. 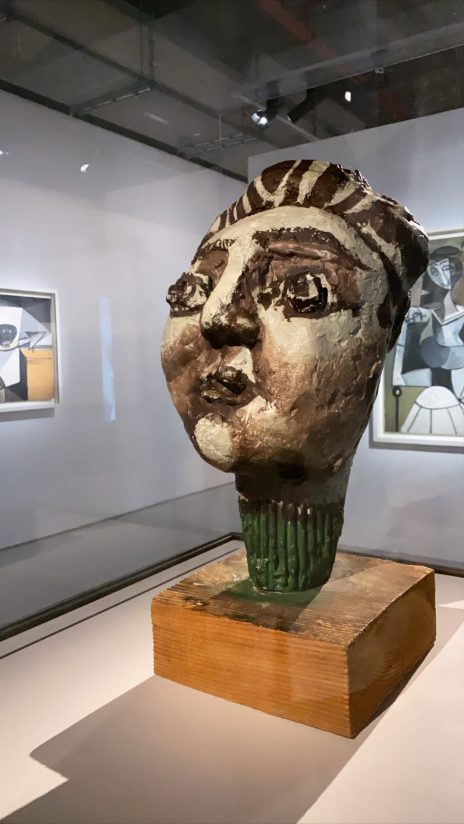 SCALE: How does Picasso’s studio become a center point for the exhibition, how did you curate the work to be around this central theme?

The different rooms of the exhibition are built on the theme of the studio, each room bringing together the works produced in the same workshop. The framework of the workshop, which returns at each stage of the tour, sheds new light on Picasso’s works, seen in the diversity of places. 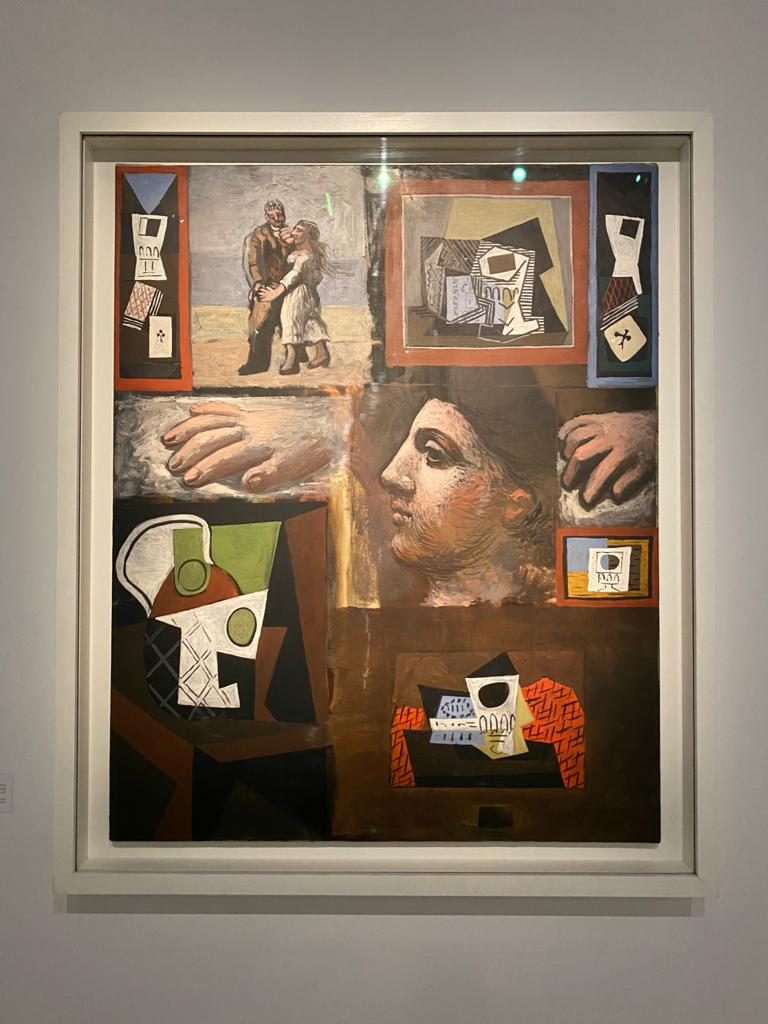 SCALE: Tell us your insights into the life of this great mastermind. Some facts that make him more appealing to you as a lover of art.

Picasso had an extraordinarily rich life and the diversity of the places he invested in adds to the profusion of his production. The catalogue raisonné of all his production has not yet been established, as the number of works he created throughout his life is staggering. Few fields did not arouse Picasso’s curiosity, whether graphic, pictorial, or plastic. 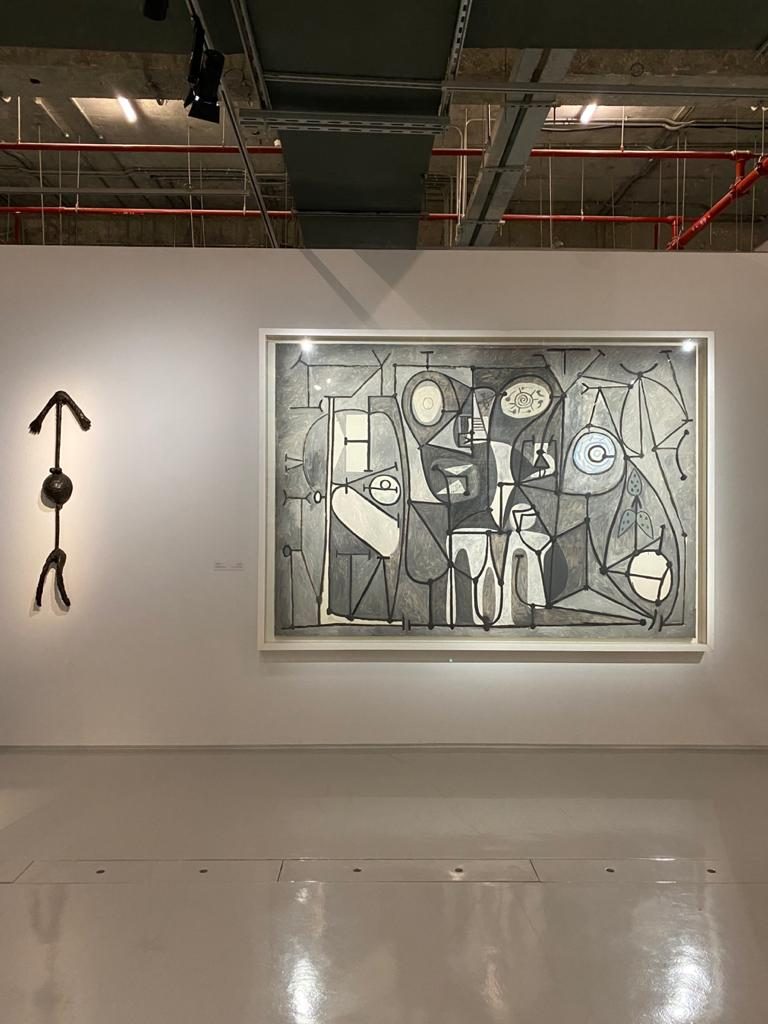 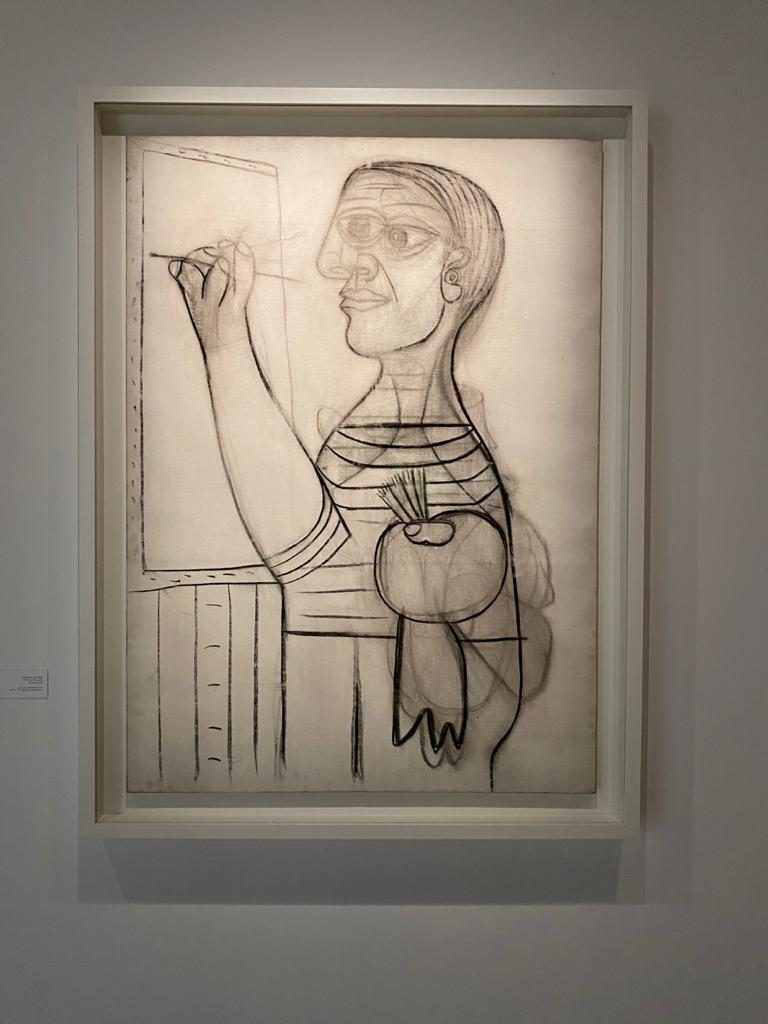 SCALE: Which one of Picasso’s works is your favourite and why?

The kitchen, painted in his studio in Vallauris, in November 1948, is a remarkable painting and sums up the exhibition in itself. With its graphic and complex architecture, it is a metaphor for the studio in which the artist elaborates his recipes and sets innovative creative processes in motion. The various fields of creation represented in the exhibition are also represented in this painting: painting, sculpture, but also ceramics presented through a plate hung on a kitchen wall. 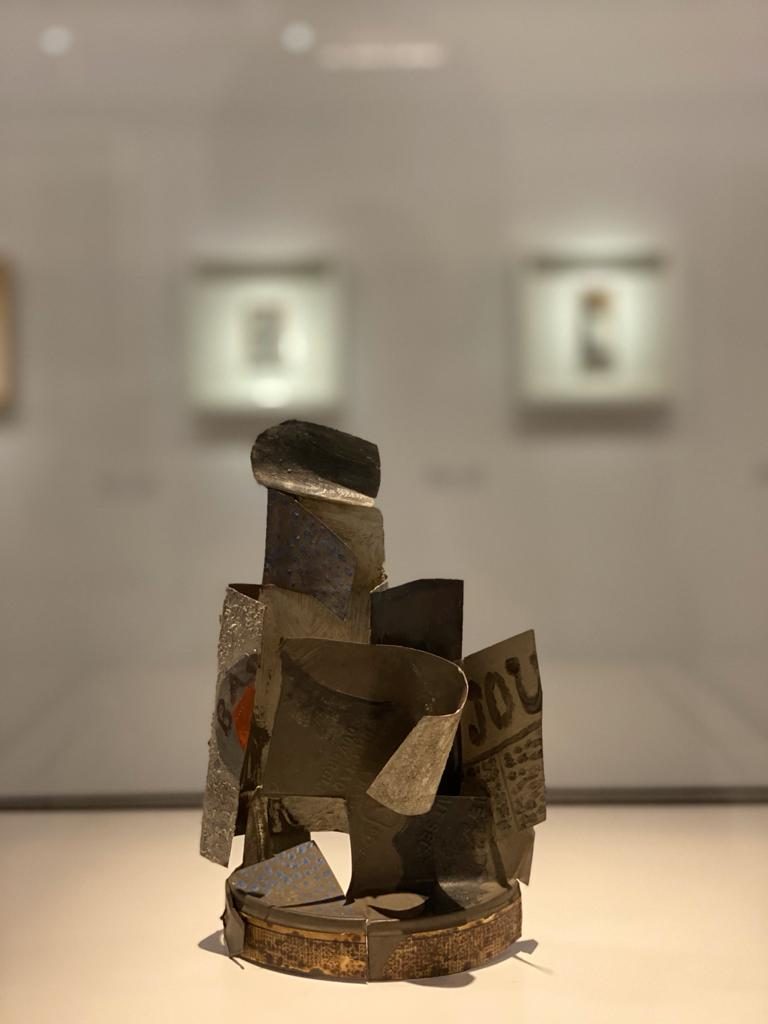 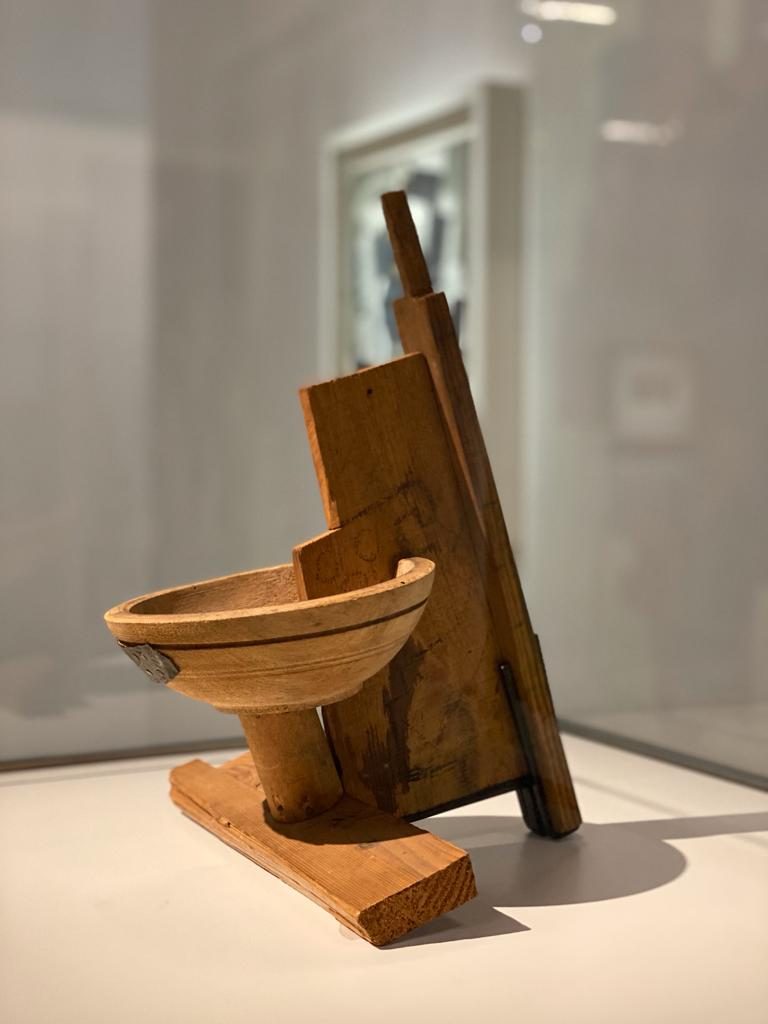 SCALE: Tell us how the work has been displayed and are you happy with the layout of the exhibits?

The rooms representing the 8 workshops included in the exhibition are distributed around a “media wall”, a large central artery, on which the documentation (photographs of the workshops, room texts) contextualizing each studio is gathered. Visitors are invited to enter the exhibition through the image of Picasso himself, in the full act of creation in the artist, through his self-portrait entitled “The Artist” in front of his canvas. 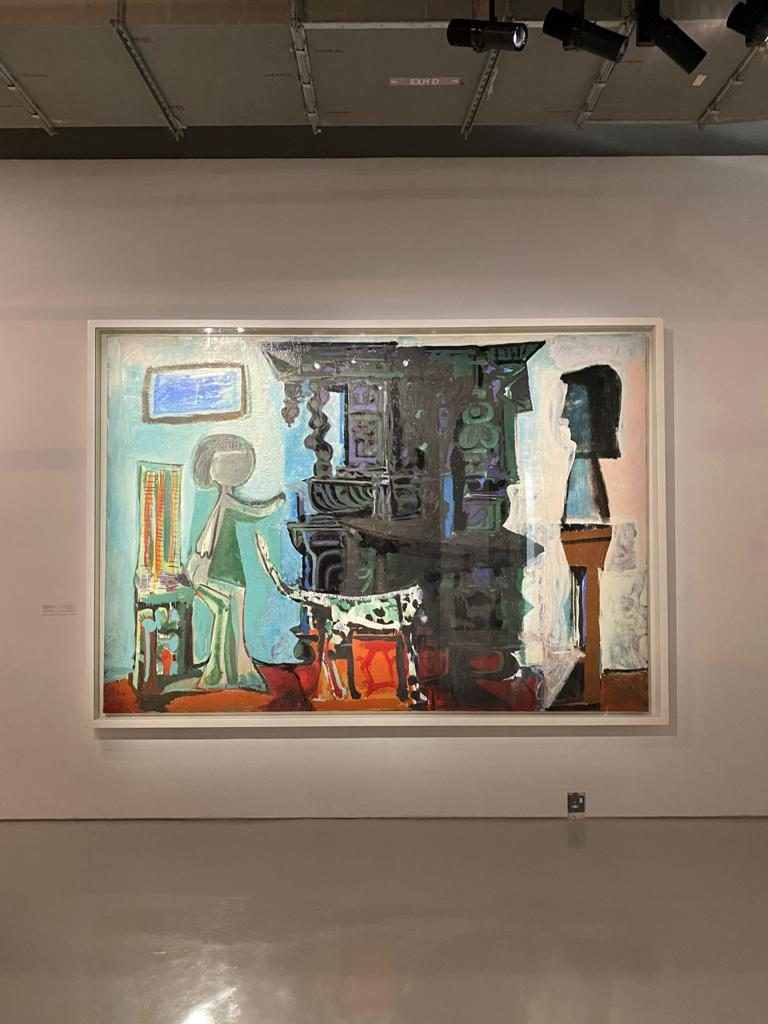 SCALE: Do you think an online exhibition would do justice to the work of such great artists?

The online exhibition offers a promising introduction but it will probably not allow us to fully appreciate the exhibition itself based on the materiality of the works. Only a visit to the real exhibition spaces allows this sensitive encounter. The opening of the exhibition makes this encounter possible. 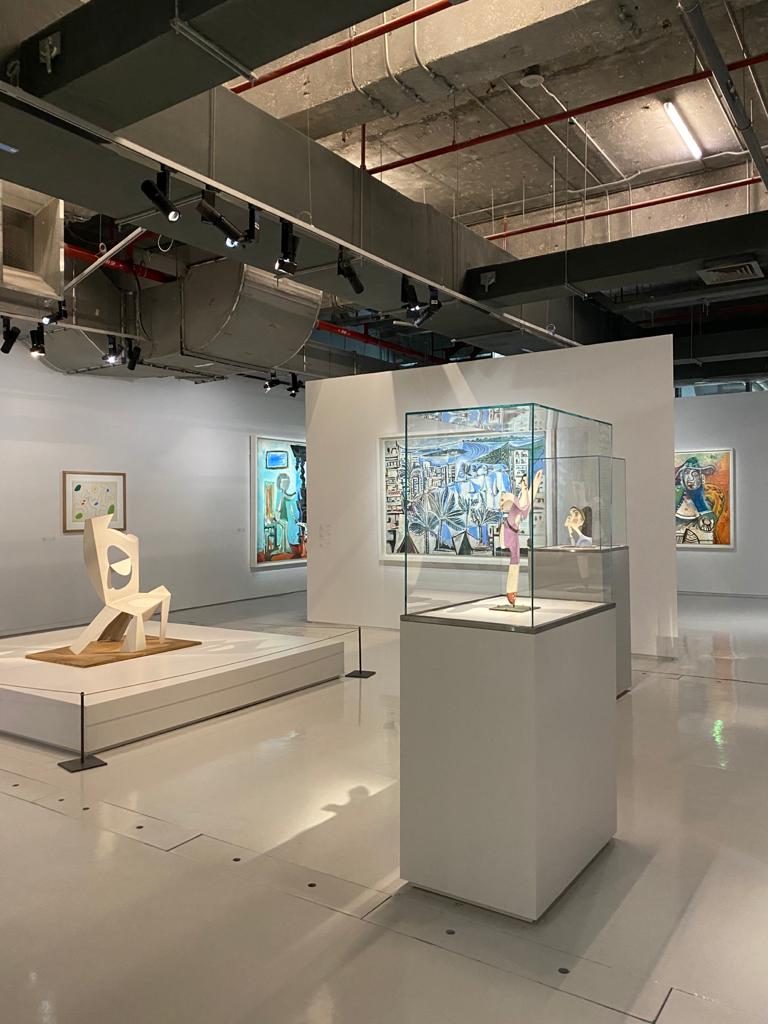 This image shows a variety of art forms created by the artist. © Succession Picasso 2020

Visitors have to reserve tickets in advance on the Qatar Museums’ website to see the works of this modern artist.