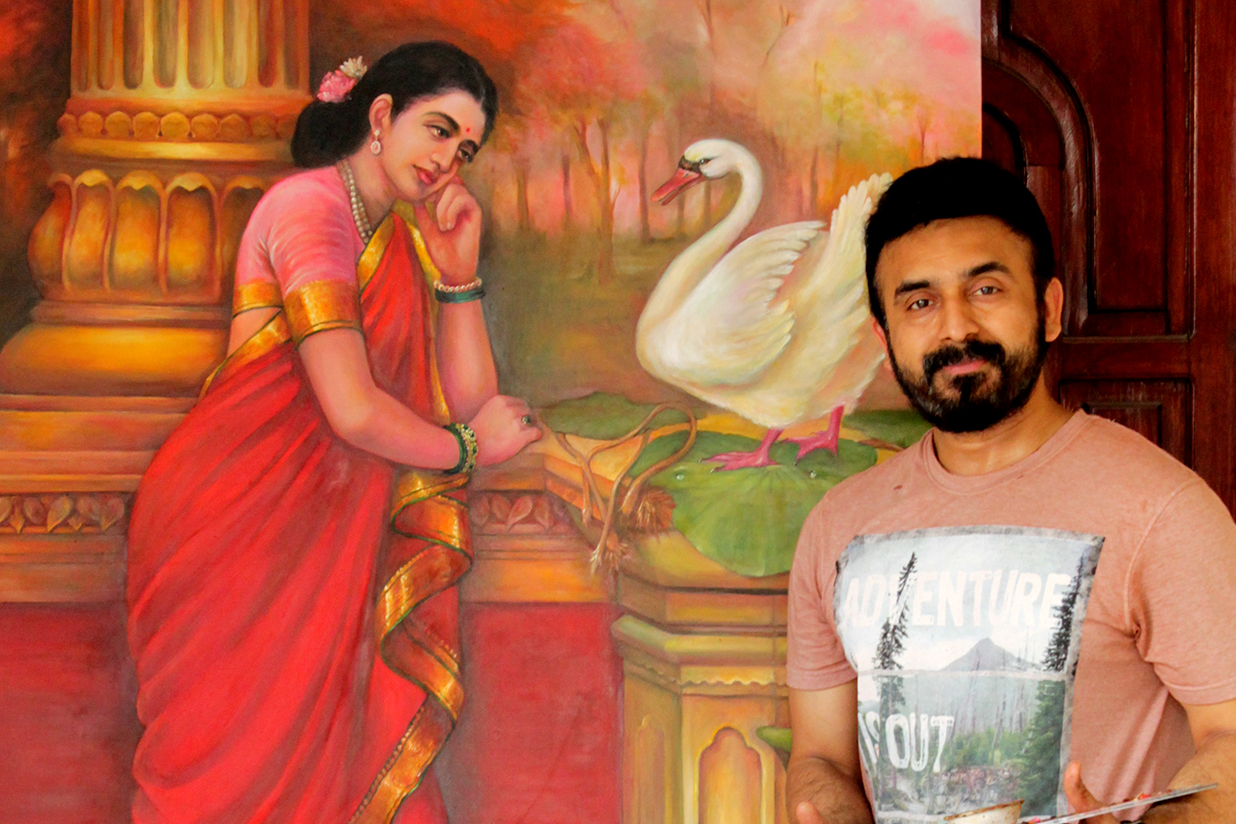 Dr. Sreekumar Padmanabhan is an inspiration in many ways; professionally, he is a frontline medic fighting the pandemic in his official capacity, and in his personal life he spreads positivity and adds colour to the canvas through his creative strokes. By Sindhu Nair

The extended lockdown has created bakers, painters, Zoom discussion experts, and sous chefs of many of us. But for Dr. Sreekumar Padmanabhan, it has been an opportunity to imbibe and learn from 18th and 19th-century masters, who have left behind a large volume of art that can be recreated to perfection. 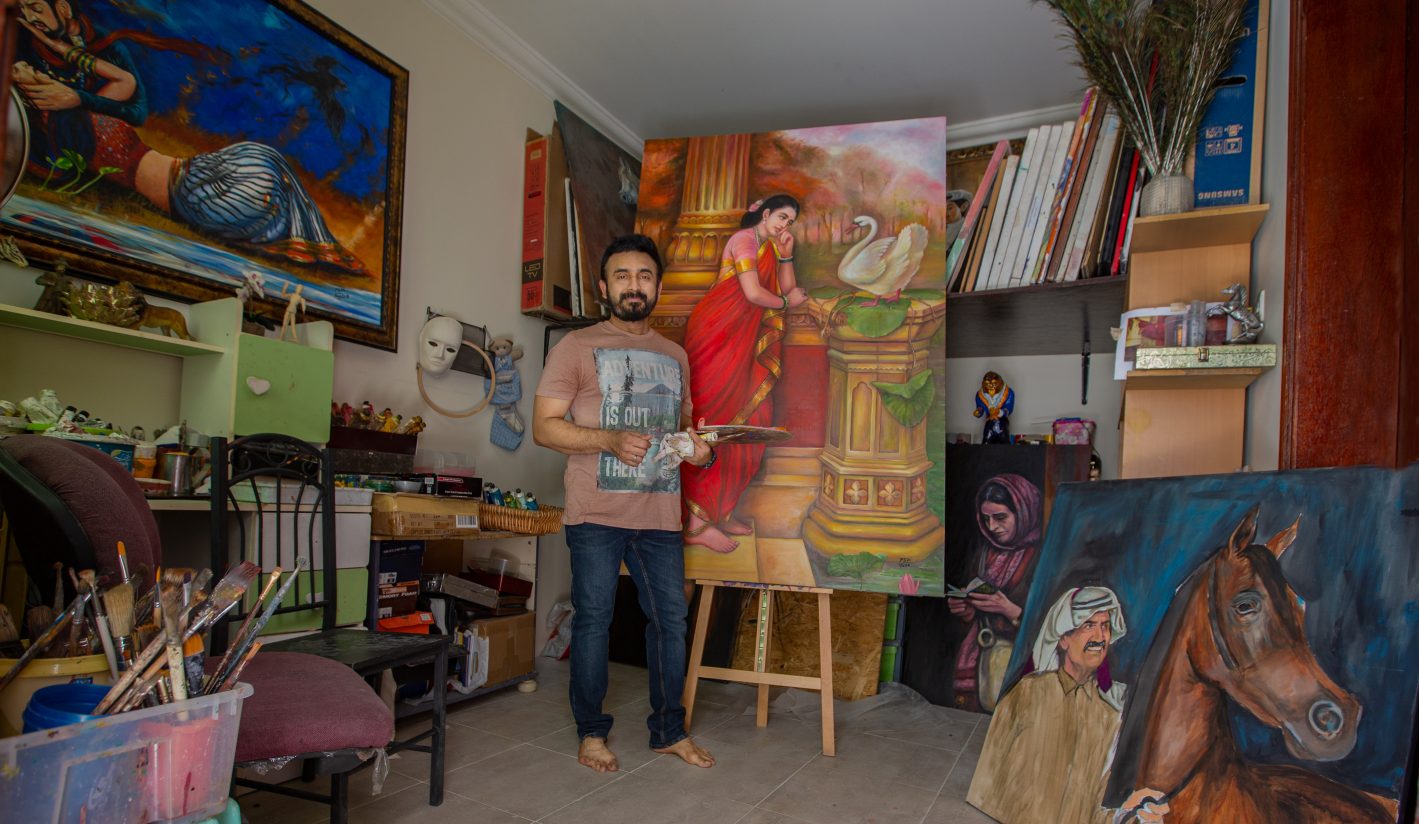 Dr. Sreekumar spends at least three to four hours, daily, at his home studio, studying and perfecting his art.

Dr. Sreekumar fights the pandemic in the morning, being part of the COVID19 day clinic in Qatar, and dons the artist’s smock at night, but with a passion that might not be evident in others during the lockdown. While his artistic talents and range of paintings have been exhibited in local exhibitions, his philanthropic activities make him a much-loved and respected Qatar-resident.

A self-taught artist, who started painting from the age of 5, his latest artwork is a recreation of one of the works of the father of modern Indian art, Raja Ravi Varma who is known for his life-like paintings and portraits. “It was akin to learning at the art school of this great master,” he says of his latest creation.

One reason that Dr. Sreekumar stands out from the rest of the milieu is that he is a perfectionist, one who persistently tries to master each stroke and brush of the master painter, focusing on the expression of the figure, and the minute details that make it distinct, trying to learn the art that they were perfect at, and creating another masterpiece in the process.

Another reason for this particular work is the story behind the Doctor’s childhood association with the artist and his early memories around the works of this artist. 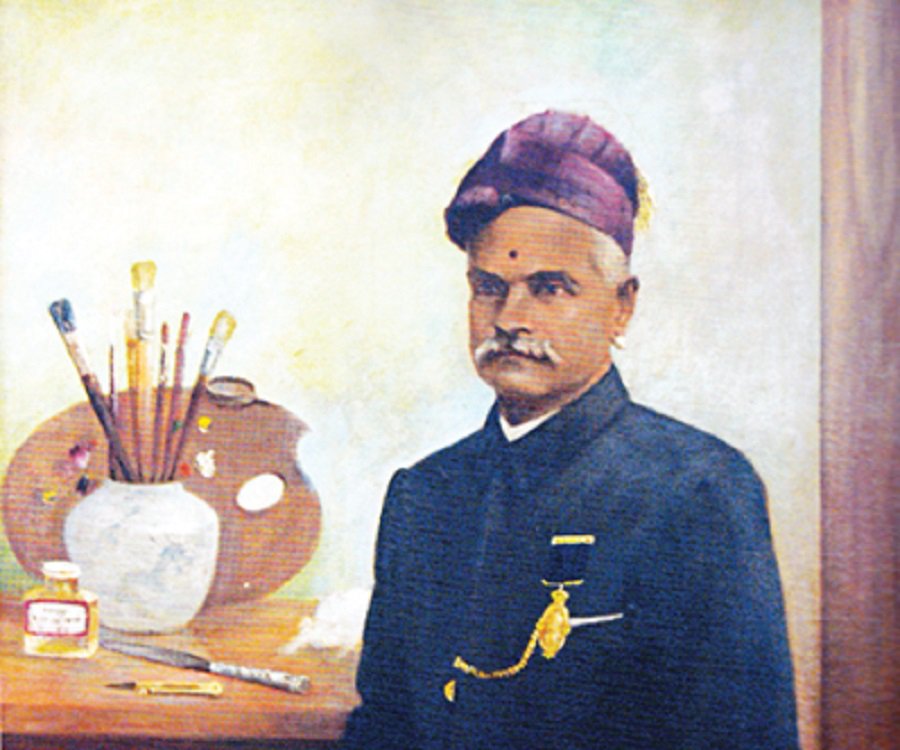 Raja Ravi Varma was regarded as the first modern Indian artist due to his ability to reconcile Western aesthetics with Indian iconography.

“I was a frequent visitor at the Royal Palace at Kowdiar in Trivandrum, Kerala, from the age of three, because of my mother’s friendship to Her Highness Princess Gowri Lakshmi Bayi. I was introduced to the works of Raja Ravi Varma at this time. The palace walls were adorned with more than a dozen of the maestro’s original classic works and I would spend hours before them completely clueless about their real greatness, yet mesmerised by the sheer beauty of it,” reminiscences Dr. Sreekumar.

What started as a trigger, made such an impact on this young mind, that even during hectic days of medical studies and subsequently while practicing his profession, his passion followed him all through. 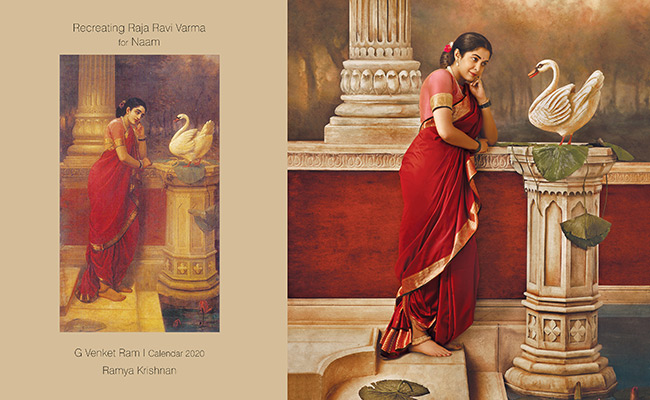 Recently a photographer, Venkat Ram had recreated the classics featuring South-Indian movie actress which gave these paintings a further boost and also triggered Dr. Sreekumar’s interest to explore and improve on his earlier works of the same painting.

“I was inspired by images in storybooks, magazines, and calendars.  Later I also started to recreate the works of masters, including classical renaissance painters. It was during my teens, that I rediscovered the illustrative world of Raja Ravi Varma,” he says.

Raja Ravi Varma is famous for depicting Indian themes using European painting techniques. He was perhaps the only artist in those times who studied art techniques in Europe and used these techniques liberally in his art, which highly elevated his work and gave it a subtlety perhaps lacking in others. This particular theme of Princess Damayanti and the Swan originally painted in 1899 had always fascinated the Doctor from his childhood. 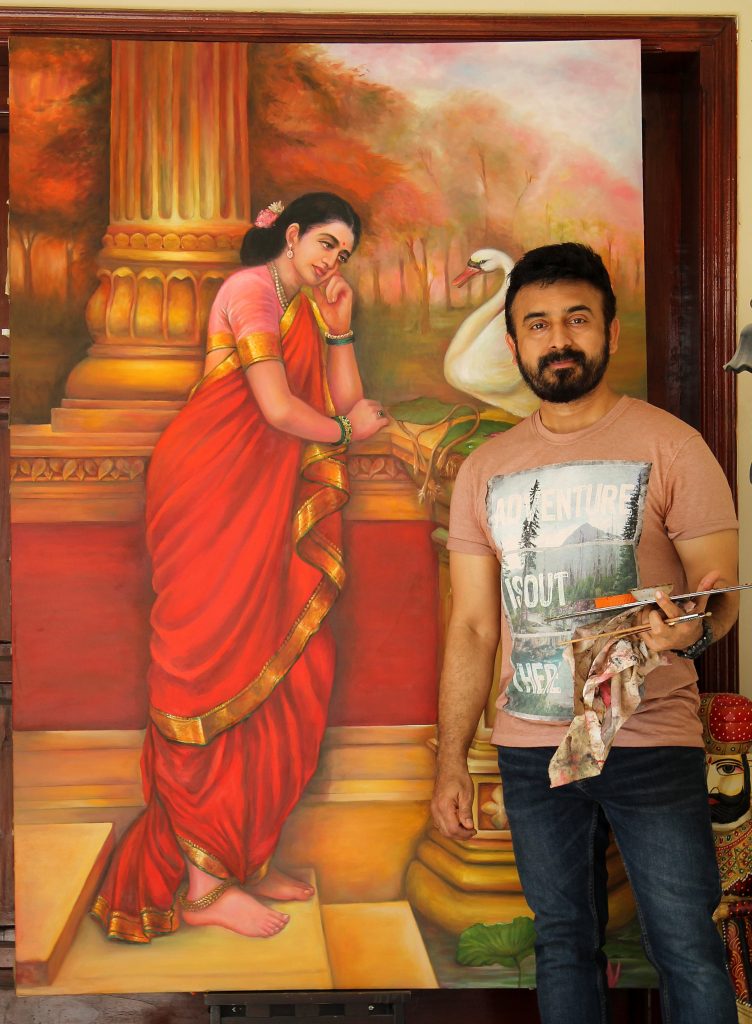 The size of this recreated painting is almost similar to the real painting and the expression on Damayanti that borders on melancholy are brought to perfection here. 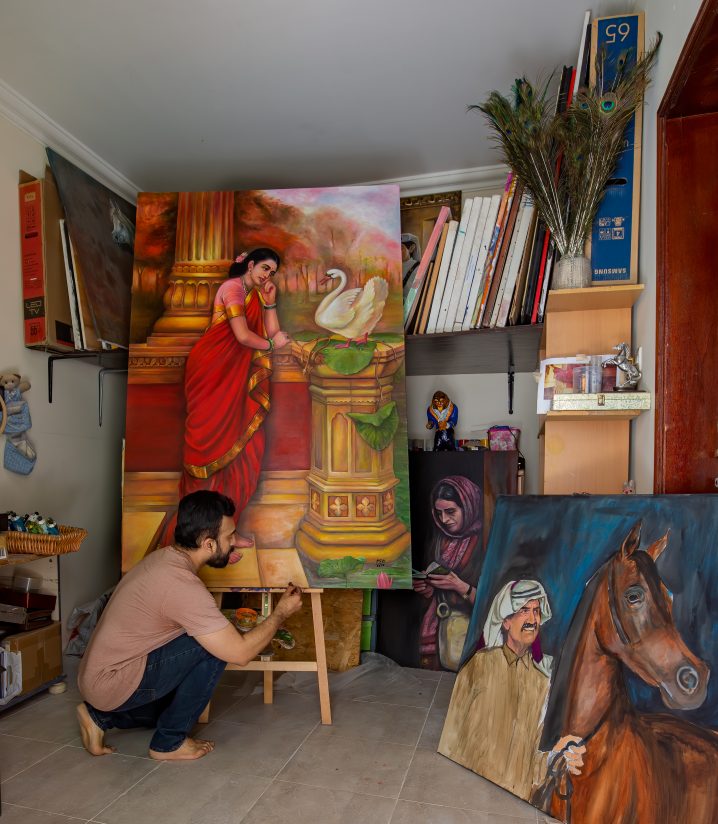 “The romanticism as well as the fantasy in the idea, the grace in the pose adopted by Damayanti and the colourful palette the artist had used in depicting the idea of incumbent love, attracted me to this painting,” he explains. As per mythology Damayanti falls in love with her future husband Nala as she listens to his tales of virtue and valour from a golden swan.

Dr. Sreekumar explains how he decided to undertake this particular painting at this unusual time. He says, “My ultimate aim, like that of any lover of realistic painting technique, is to trail the creative path of John Singer Sargent, an American artist, considered as the “leading portrait painter of his generation” for his evocations of Edwardian-era luxury. He was known for his typical usage of broad-brush strokes to create portraits which is a bold technique to use. Just before I started on this one, I had finished a commissioned painting of His Highness, The Emir, in that particular John Singer style. It came out quite well but as soon as I finished that, I wanted to do something completely different. And the lockdown period being so stressful at the clinic, I wanted something that would engage and absorb me within its intricacies. That is when I knew that there was no better work than Raja Ravi Varma’s painting to focus on since it would require many hours of continuous work given the size of the painting and its precise detailing.“

And this jump from one expertise to another, from one stroke to a new one, exploring materials, working across different contexts and backdrops more than a dozen times is Doctor’s forte, learning as he moves from one artist to another, continuously educating himself in the art. His interpretation of Michelangelo and Rembrandt lie unfinished in his studio waiting to be completed as his education in that specific art technique continues.

“Each time I feel a thrill and energy when completing a new technique” he says, and the particular pleasure while completing a master painter’s showpiece is an added adventure for the Doctor. 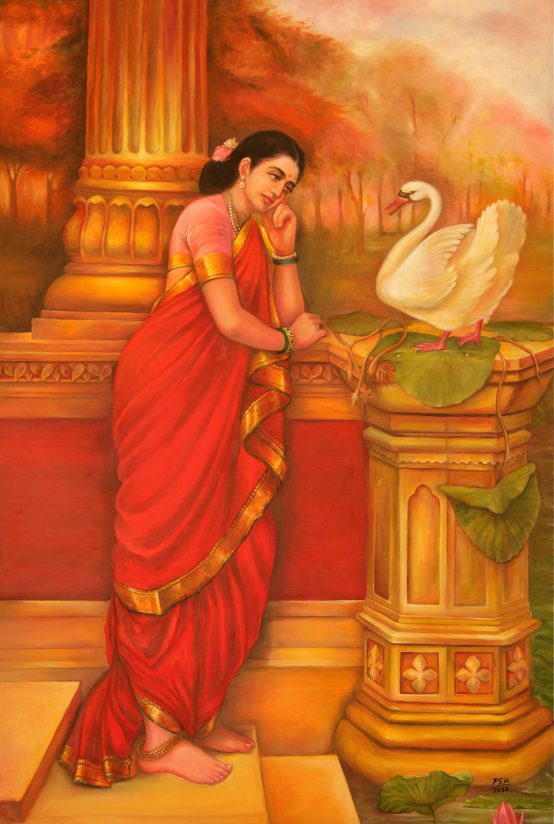 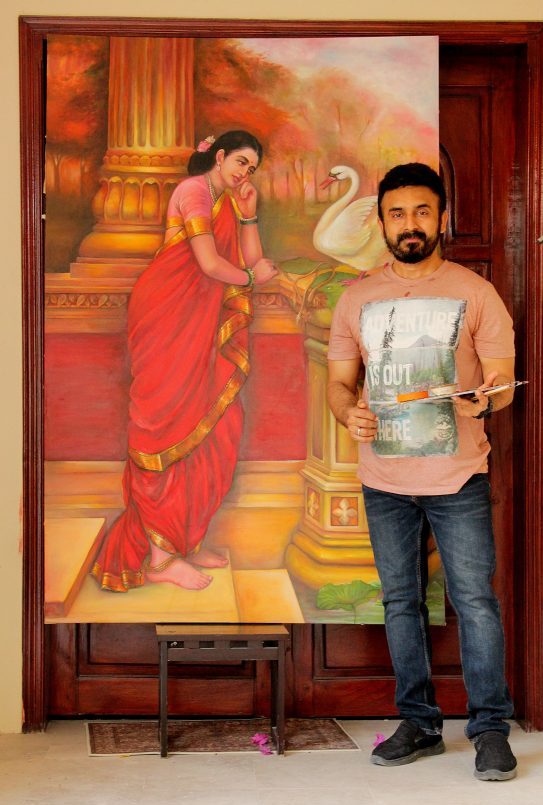 Dr. Sreekumar has already finished various works of Raja Ravi Varma, and this particular work has already been painted six times, improving expressions each time and learning one further paint stroke every time.“I always feel a personal connection with the artist, Raja Ravi Varma himself and drawing the same painting across various stages in my life has been a revelation and experience in itself. I am inspired by his quest for beauty, a realistic and yet romantic portrayal of both real-life models as well as mythological characters,” says Dr. Sreekumar.

“As an artist, I feel Ravi Varma is India’s own Da Vinci, with the only difference being, Varma’s paintings are not mysterious, they are more approachable and identifiable to us, and that is why it is relatable with most of the Indian art lovers.” 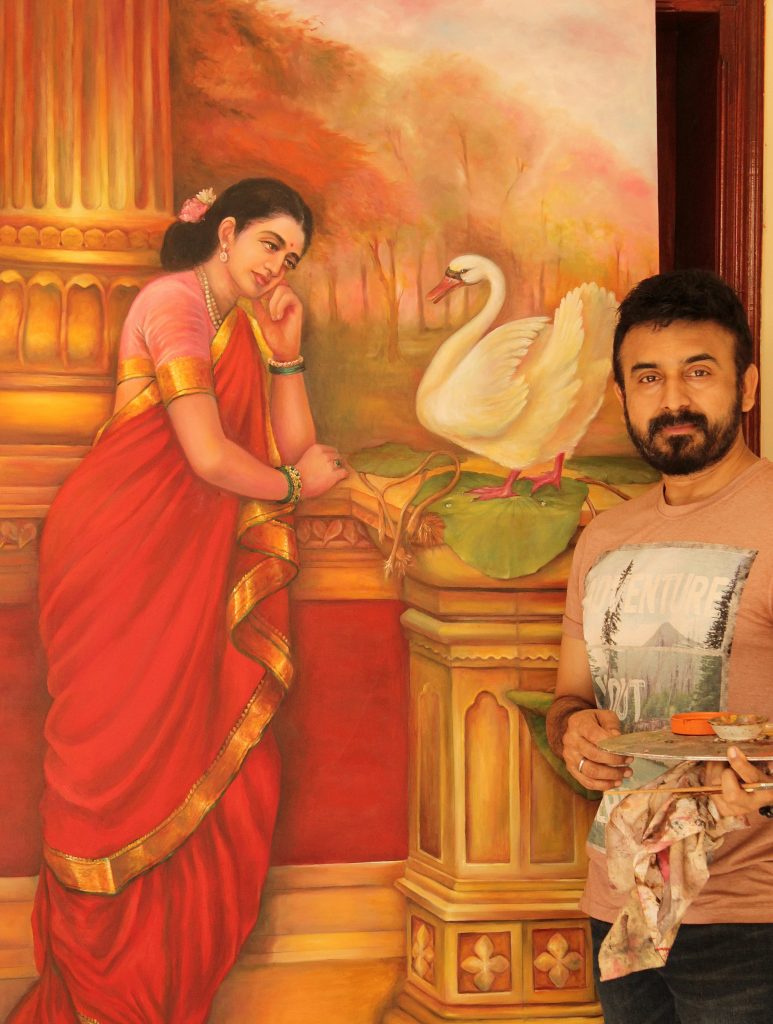 To the big question of whether he will ever come up with his own style of creation, Dr. Sreekumar feels that he is still on the path of self-discovery, as a musician, developing his craft, before composing one of his own.

Like a gifted musician puts his own unique spin on works by others, after having mastered the art, and then compose their own works to be shared and reproduced for generations to come, he would find his genre in this process of learning from the best.

“The great masters and their works remain an inspiration and guide in helping me find my own style and expression.”