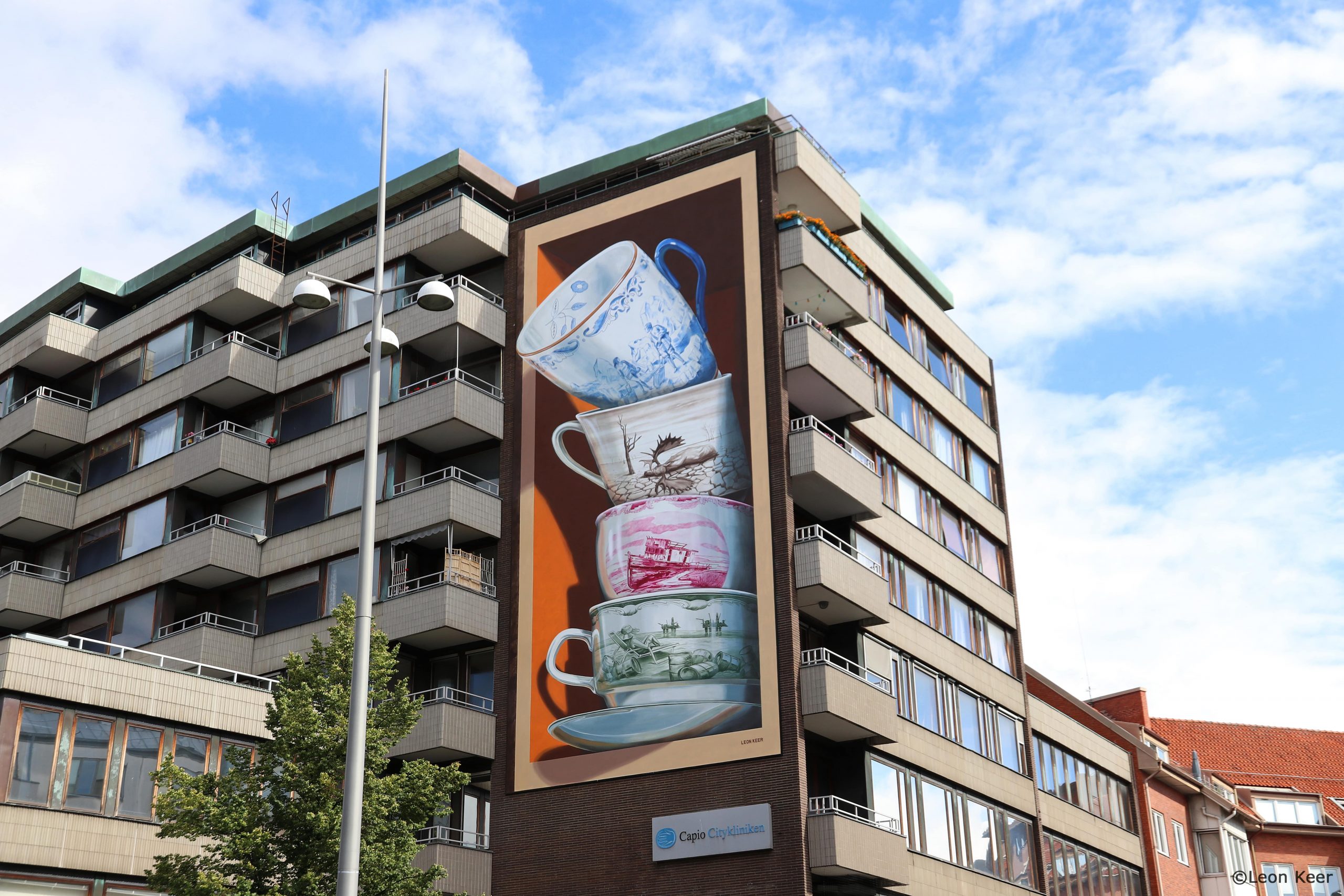 Tumbling crockery is the new metaphor that Dutch anamorphic street artist Leon Keer has focused on to depict climate change and the impermanency of life. 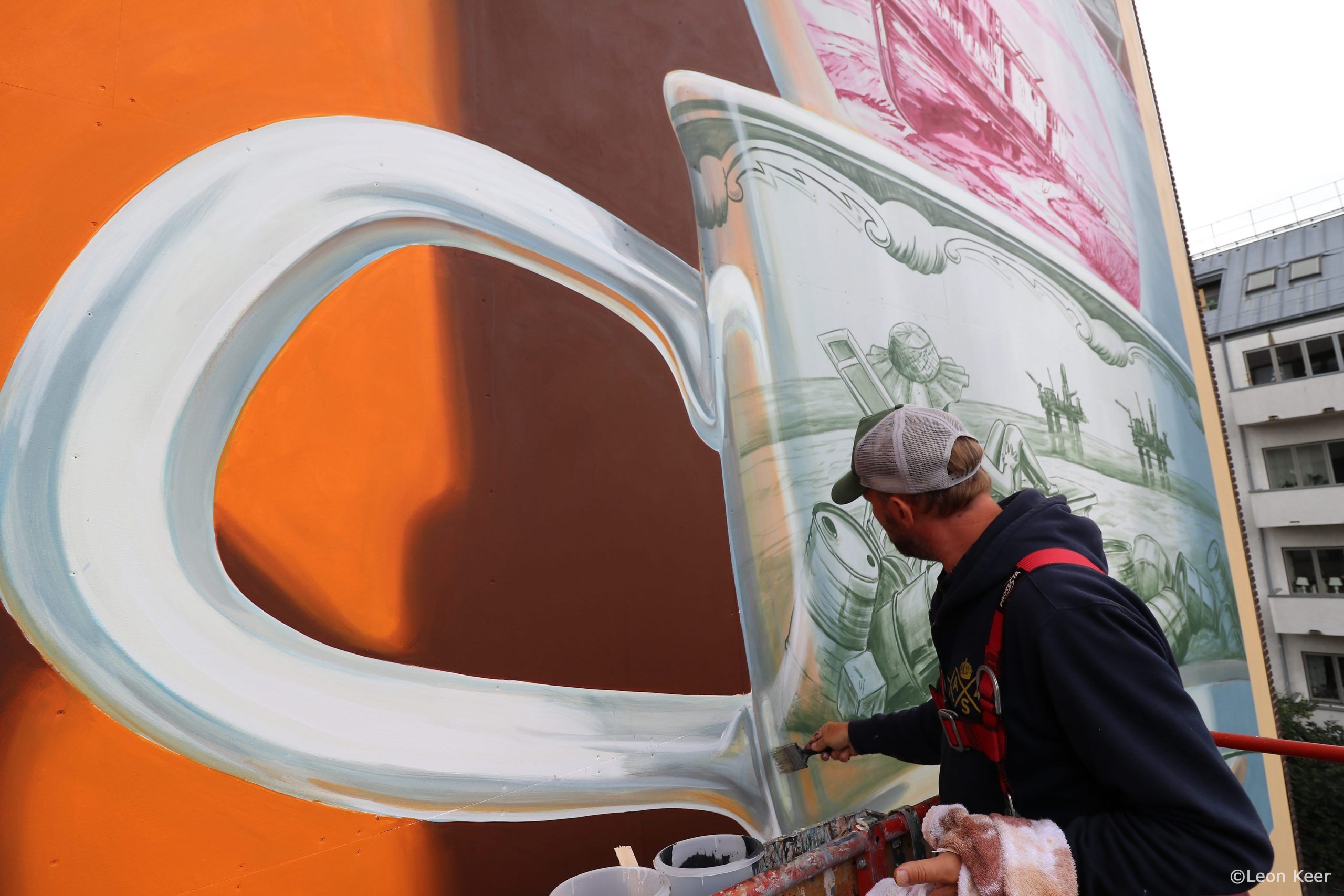 What makes this public art painted in Helsingborg, Sweden for the ArtStreetHbg festival spectacular is not just the three-dimensional aspect of the larger than life mural but the fact that the artist Leon Keer has made the painting come to life with Augmented Reality when the precariously balanced teacups shatter. The shattering teacups remind the viewers of the fragility of life and acquired things.

Each of the teacups is executed to perfection, with minute details on the cup depicting doomsday scenarios, letting the viewer know in no uncertain narrative that, “life is as fragile as a teacup, ready to shatter in an instant.” 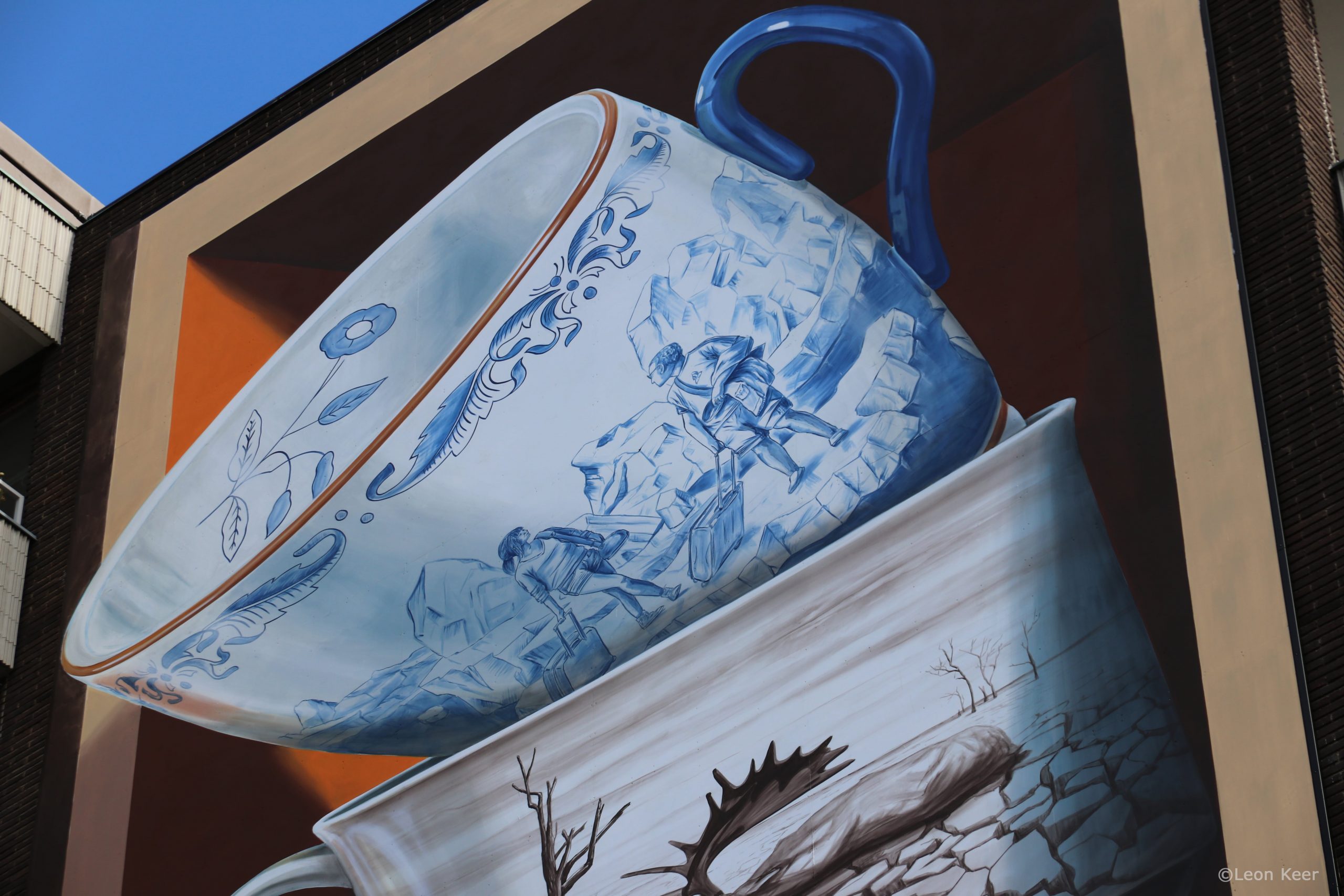 The cups are teacups from Rörstrand, the famous ceramics from Sweden, each one of them in 15 x 7.5-meter size.

To complete the story of the artwork, Leon collaborated with augmented reality designer Joost Spek. By scanning the mural with the Leon Keer app, the shattering of the teacups can be played out in horrific precision, thanks to animation. The incorporation of this technology was a new challenge for the artist as he had to perfectly match his painting with the 3D animation. 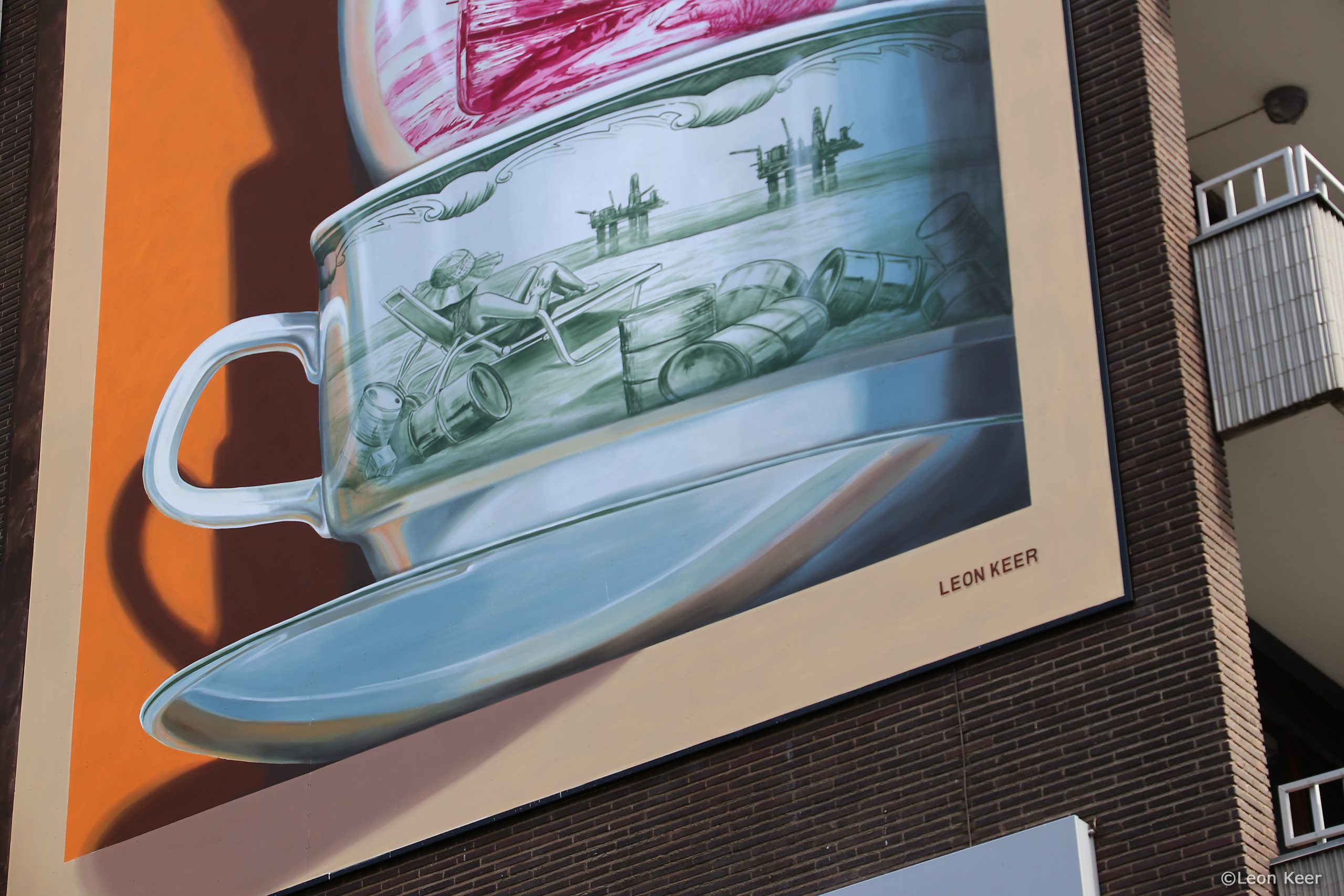 But this is not the first time that Leon has brought such thought-provoking murals to life, he has always tried to bring current issues on focus through his work, like the Plastic Diet’ 3D mural in Boulogne-Sur-Mer France for the ‘Urban Art – Street Art Circuit‘ festival where he touches on the voracious appetite and over-consumption of plastic goods of mankind.

With executed commissions in Europe, The United States, Mexico, The United Arabic Emirates, Saudi Arabia, Russia, New Zealand, Australia, and several Asian countries, Leon is constantly aware of the playfulness and beauty and in contrast the degradation around him. It is this disparity that he expresses and amplifies in his work and which he uses as a metaphor for life.

His paintings reflect his thoughts, confronting the viewer with the diseased spirit of our times, visible decay counter-pointing a timeless longing for unspoiled beauty. Stunning artworks on the most depressing actions of mankind seems to be his signature.

During his career, Leon Keer often presented his art as live-action-painting performances. His ability to perform as a street painter, lets him share the joy of painting with the public. The anamorphic paintings are temporary but the images are shared via social media all over the world, he says. 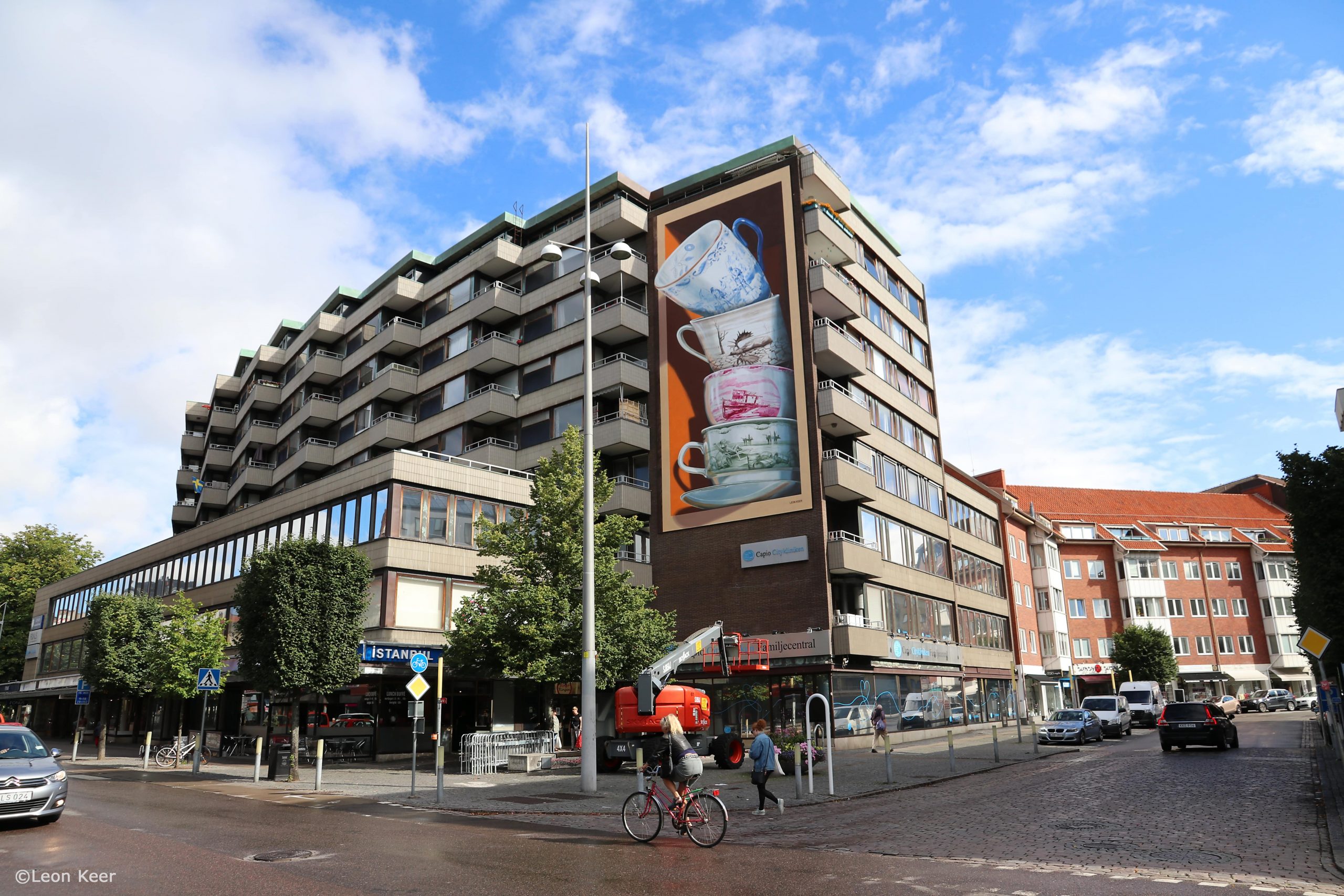 He says: ‘Every street art piece is unique and belongs to the street and its residents, the temporary fact about this artform strengthens its existence’.

Check out the AR by scanning this, Leon Keer