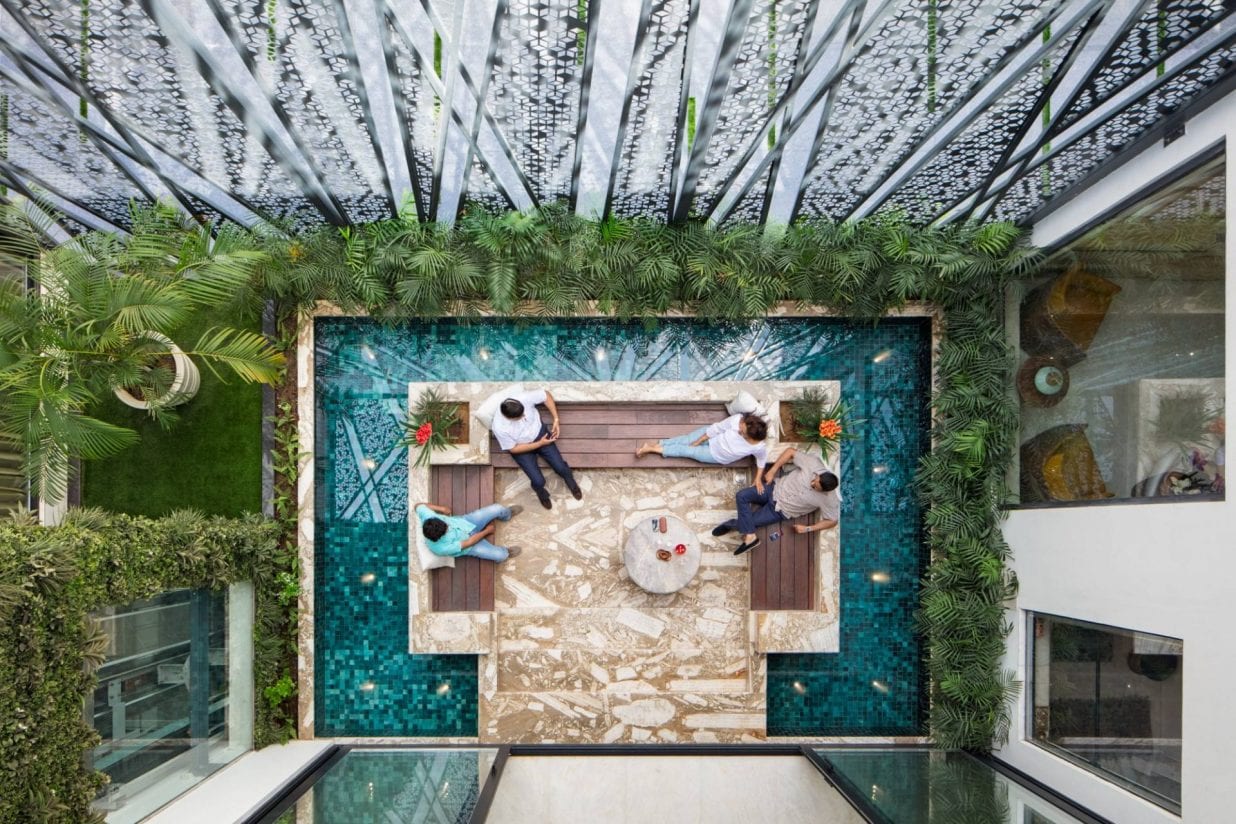 The Cantilever House designed by Zero Energy Design Lab is said to be a net-zero project that draws from the regional vernacular and finds expression through a contemporary lens. The House is designed for four members of a family in the Raj Nagar locality of Ghaziabad, part of the National Capital Region of Delhi. The design employs a series of mechanisms that minimises resource consumption and reduces the building’s environmental impact while enhancing the residents’ thermal comfort. 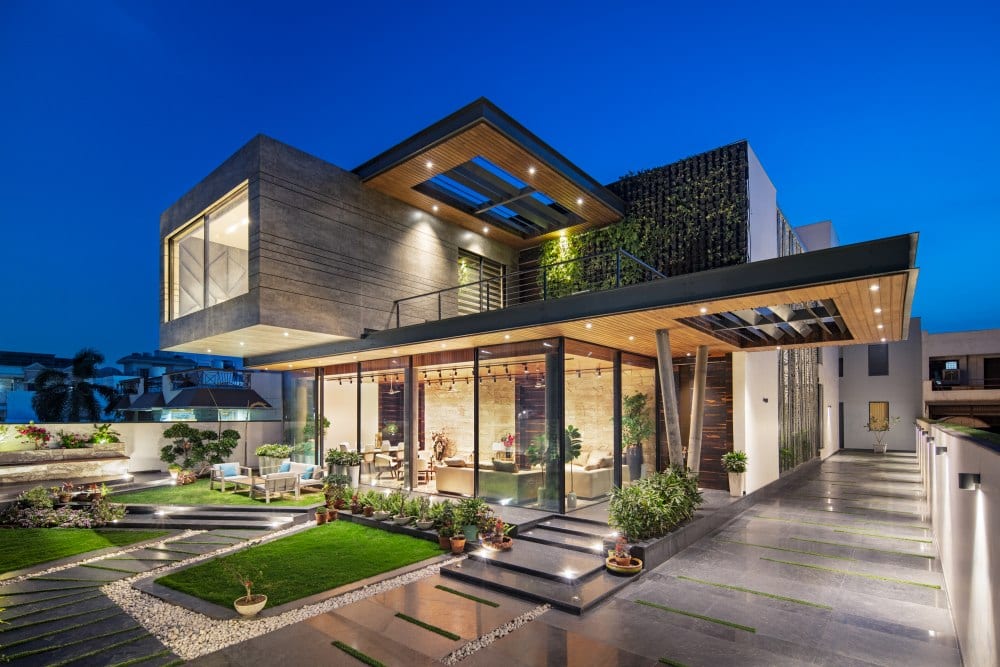 The large cantilevers that the house derives its name from, anchor the design vocabulary of the Delhi house, highlighting the scale of the building and breaking its mass through the focus on horizontality. The interiors have been designed with comfort and luxury as the core prerequisite with large, open spaces and double-height living room areas to heighten the luxurious feel of the house.  While the name of the contemporary house pretty much sums up the structural design of the villa, the images do not seem to be in conjunction with what one imagines a “net-zero project” would look like. 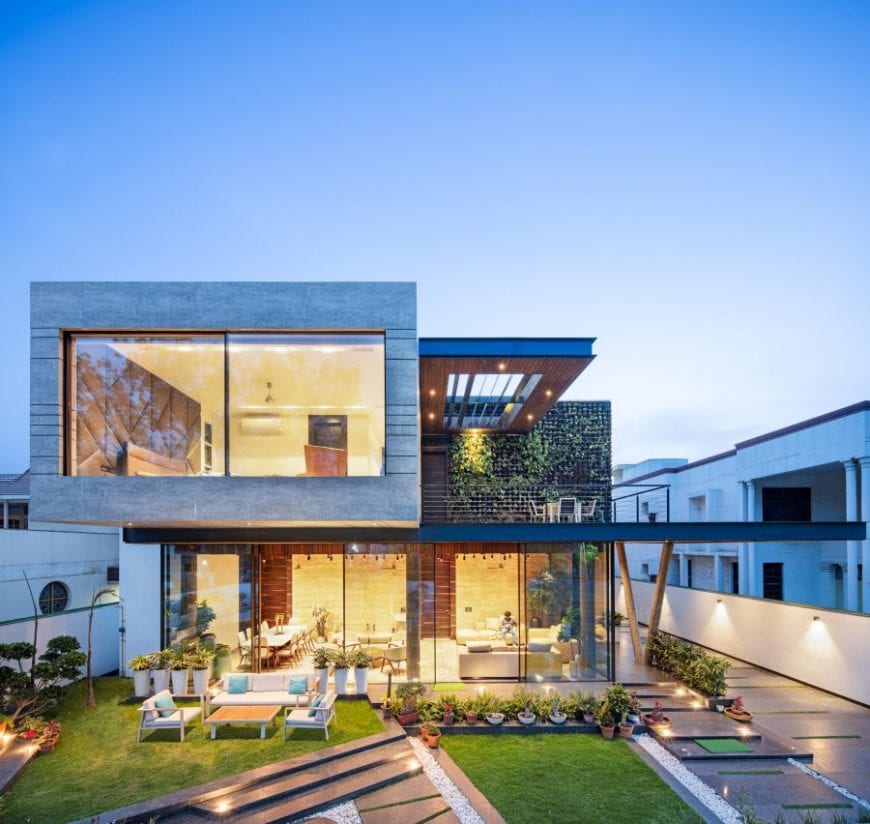 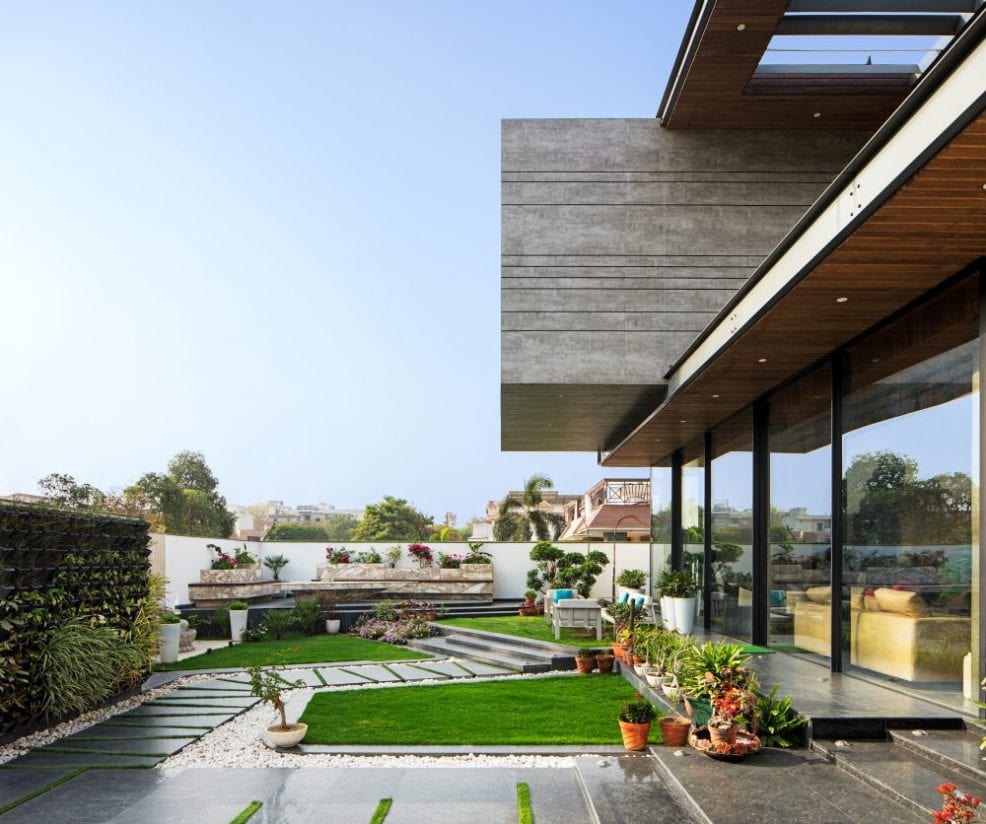 Zero Energy Design Lab, Founding Director, and Principal, Sachin Rastogi explains why the house is called a net-zero project, “The Cantilever House is designed with an affordable net-zero approach. Contrary to common assumptions, a net-zero building or one that strives to be net-zero, does not need to be expensive to construct and maintain; such a building is designed to work with its climate and context.”

In most buildings, the main energy loads are constituted by the electrical and cooling requirements. And it is in these aspects that the design firm has very diligently and intuitively worked on to reduce the load demand through passive design principles. “It employs a series of mechanisms that minimise resource consumption, and reduce the building’s environmental impact while enhancing the residents’ thermal comfort,” he says, “The primary challenge was to design the frame with judicious use of steel for economic viability, given that the cantilevers form a dominant part of the design scheme and a typical one demands adequate steel reinforcement to generate structural integrity. Additionally, the design received skepticism from the client, and workers on the site had to be trained to execute the construction with precision. The overarching design intent, however, was to create a sense of privacy while channelling an open, connected environment for the family. This took shape through an interesting interplay of living spaces, with the main living areas occupying the ground floor and the private areas located on the first floor.” 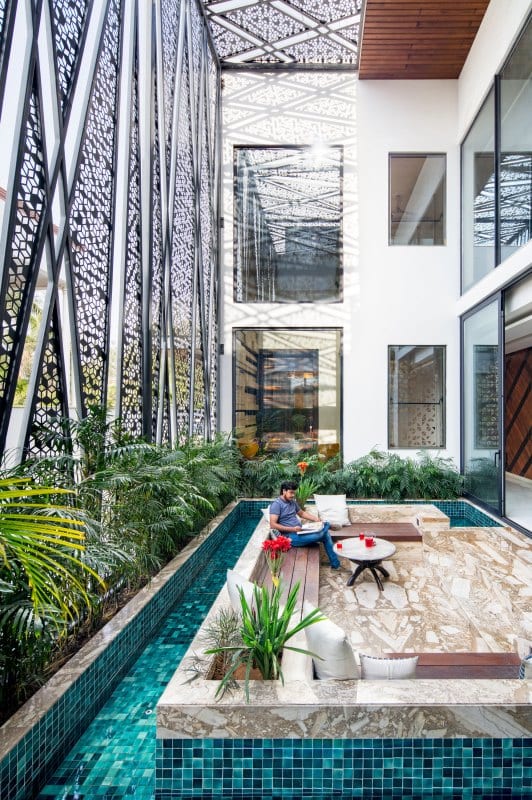 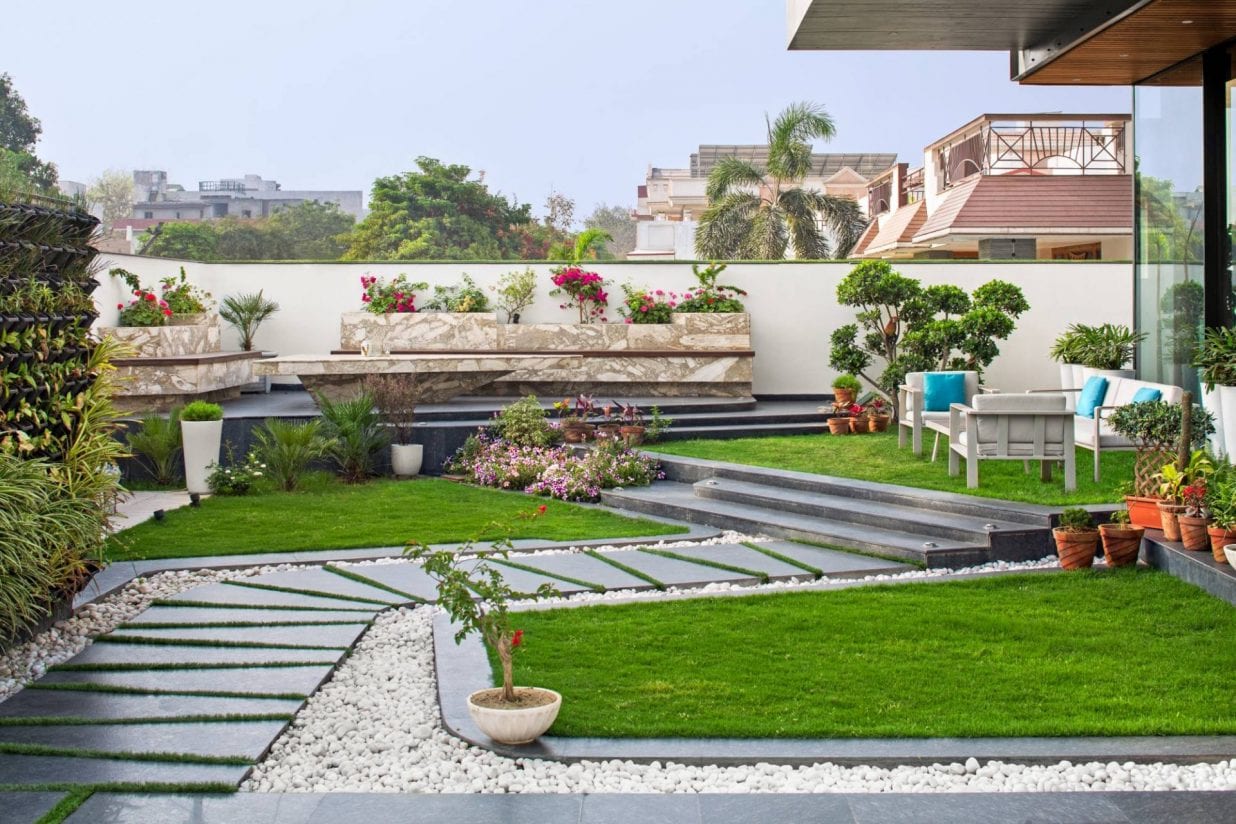 The design scheme of the house, according to the designing team was largely driven by two endeavours: first, to assimilate traditional building wisdom and find an appropriate expression within the contemporary context. Second, the distribution of various private spaces and varying volumes are planned in order to account for the diversity of usage based on the time of the day and privacy required. Thus, a series of connected living spaces, courtyards, and bedrooms were planned with the intent to create a home that could be brought to life throughout the day. Similarly, the cantilever slabs spanning the verandah, render a modern aesthetic while creating shaded spaces underneath and also spaces for the congregation of the family.

RELATED  A Medley of Colours

The geometry of the cantilevered forms is such that it aids in externalising rooms and maximising space, serving not only aesthetic but also functional purposes. 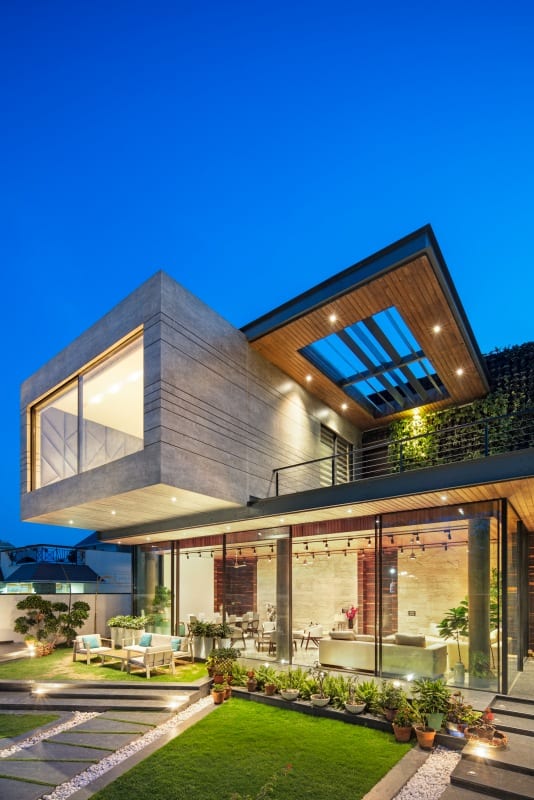 “Spaces are fluid and interwoven, with interstitial spaces creating seamless transitions from the inside to the outside. As one is led into the house through the double-height lobby on the east-facing entrance porch, they are pleasantly surprised by the garden’s view with a water body. Bringing the exterior environment inside, by providing green areas in the interior spaces, establishes a strong visual connection with the outdoor landscape,” explains Rastogi. 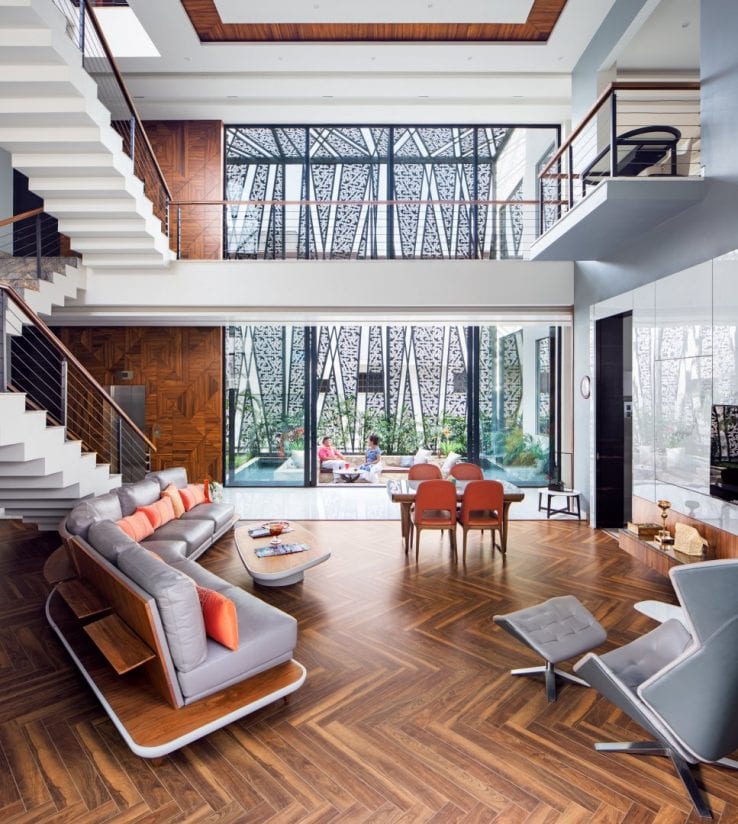 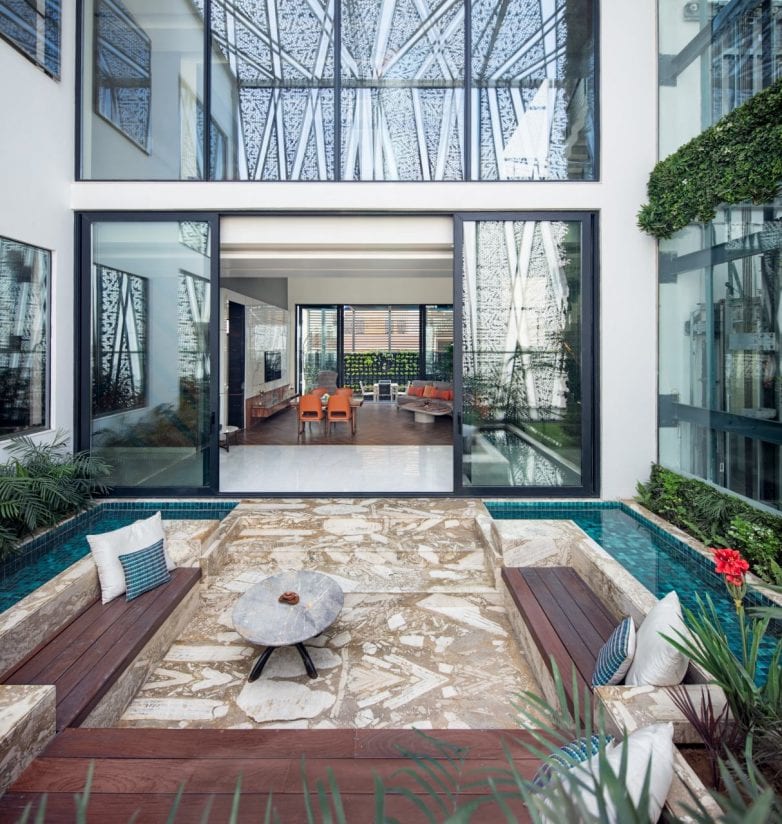 While the interiors and the planning of the house are stunning with a heightened sense of drama included in its visualisation, it is how the house responds to the hot and dry climate prevalent in the region through a host of design interventions and passive cooling techniques that makes for a superlative design.

“By placing the living areas in the north and the east to bring in sufficient daylight and by allocating space for private areas in the west and the south, the house records minimal heat gain throughout the day.

Interventions such as transition spaces, interior courtyards, shading devices, cavity walls and double-glazed windows are simple yet effective measures that have been adopted to draw down the home’s energy requirements,” recounts Rastogi, taking us through the various features that make for a net-zero-energy plan.

“For example, the double-height lobby is flanked by the summer court on the north and the winter court on the south to enable stack ventilation at all times. The night-time spaces are characterised by optimum thermal mass to protect the day-time spaces from the south and west sun. The north face of the house is glazed to admit diffused daylight and avoid heat gain and glare. To prevent heat gain from the south, the design minimized the number of windows on the south façade and these were shaded further with the addition of a pergola. The facade is fitted with double-glazed units with low-E coating for thermal resistance. Moreover, since the walls and the roof are a major source of heat, the cantilevers provide shade and help in bringing down the temperatures inside.” 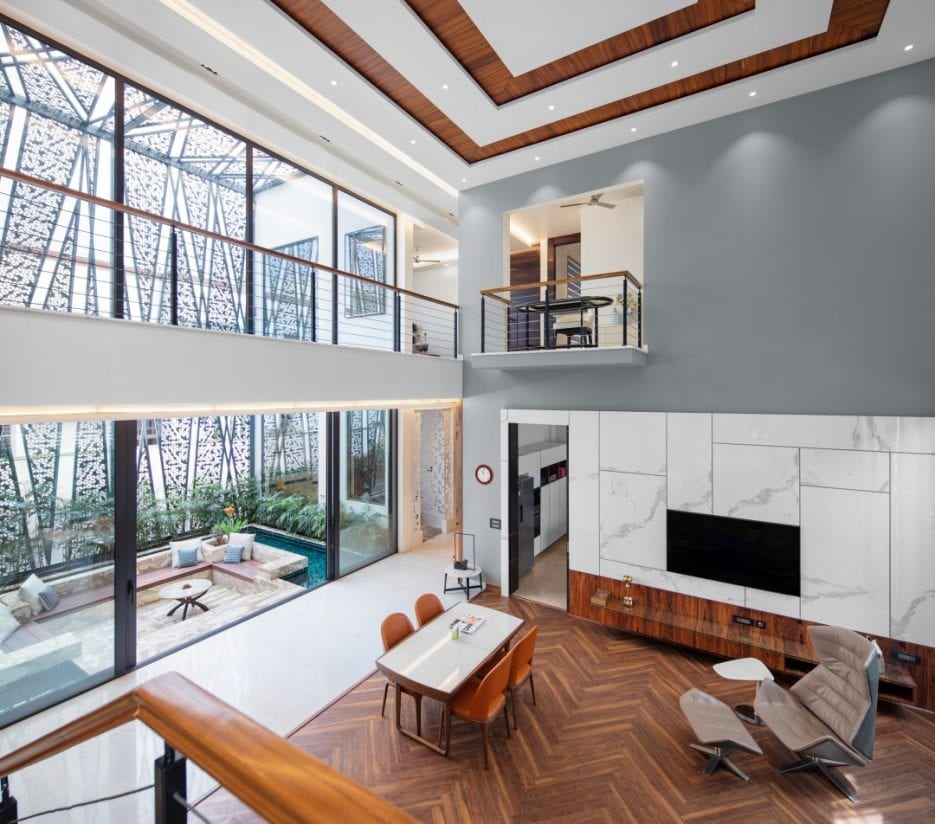 In addition, the design adopted the use of locally available materials that are affordable and have high thermal mass as well as specific design elements such as indoor green spaces and water bodies that create a cool micro-climate – highlighting the home’s affordable net-zero design approach.

The east (front) elevation of the house features expansive projections that break the mass of the house. The master bedroom, located on the first floor is designed as a cantilevered block, jutting out over the landscaped garden. A large opening brings in ample light whilst offering expansive views of the front lawns. 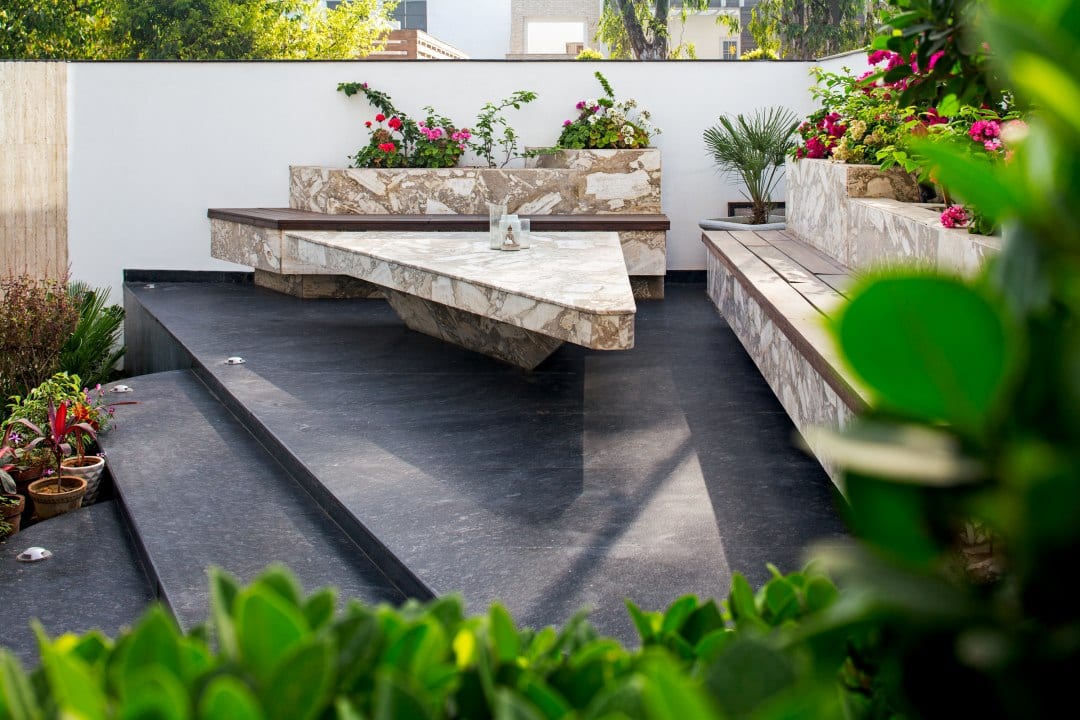 The design lays emphasis on responsible living through its layout, the use of passive cooling techniques, and by drawing energy from renewable resources. Metaphorically, the house is a play of contrasts serene and cool, yet simultaneously, adventurous in its design approach. 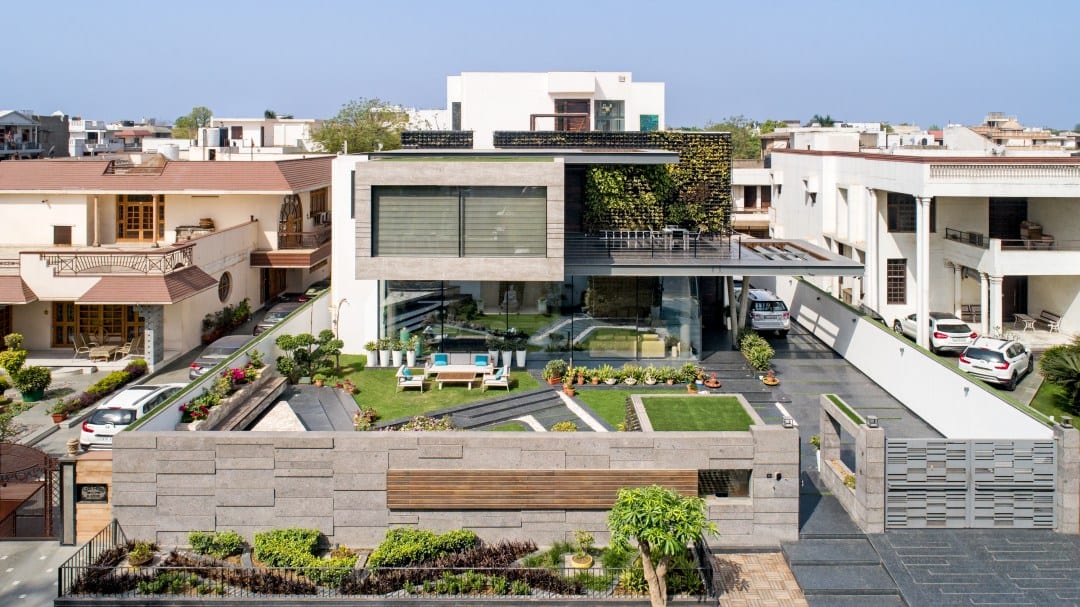 “Our design scheme for the Cantilever house was largely driven by a deep and innate understanding and application of age-old bioclimatic wisdom, which was then reinterpreted to find an appropriate expression within the contemporary context,” says Rastogi.

The interiors comprise a material palette featuring varying shades of browns and greys juxtaposed with the use of bright, upholstered furniture and decor elements. The house is full of cosy nooks, designed for maximum comfort and wellbeing, as well as encouraging responsible living. 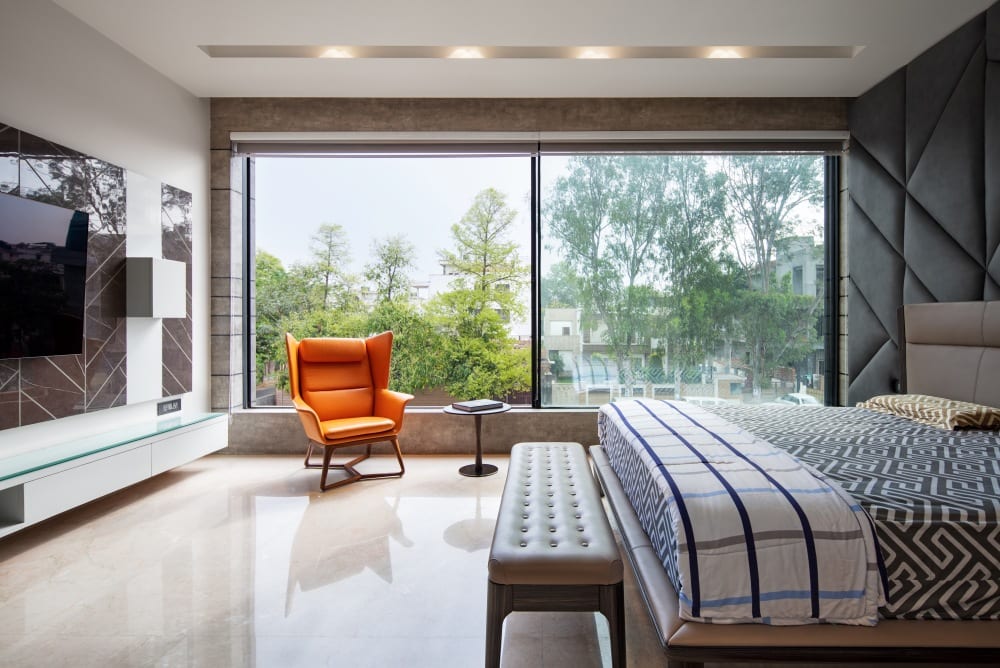 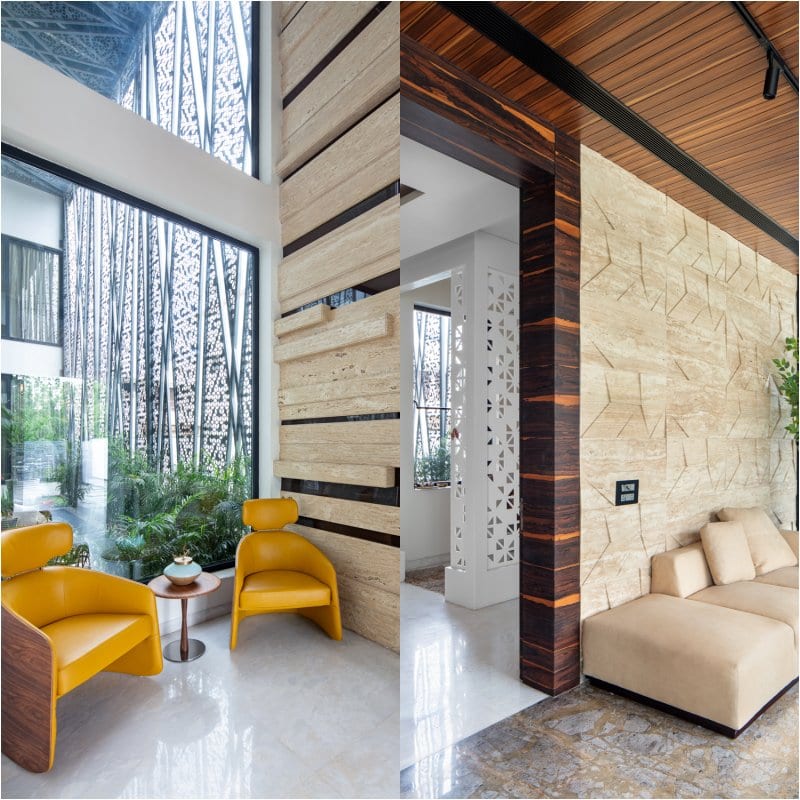 While the house has been planned with sustainable energy techniques planning, the use of steel for the cantilever verandah seemed to debunk its earlier claim of responsible construction, Rastogi explains why he has opted for this, “Steel has been strategically placed on the north elevation along with the central courtyard. Due to its location on the northern side of the home, it receives only the diffused radiation from the sun and hence doesn’t get heated up. Also, the steel structural elements are at a height of 20 feet from the rooftop, thus, hardly any impact is observed on the roof and the house. Shaded by the cantilevered forms, the steel elements are not subject to direct heat from the sun. Moreover, solar heat sinks reduce the impact of heating in the indoor areas.”

With an overarching focus on utilising transitional spaces, the design for the Cantilever House upholds the importance of spaces in providing adaptability and enhancing the built quality of the environment. The house borrows from the Indian vernacular and its traditional architectural elements through a modern interpretation. A central atrium echoes the role of a traditional courtyard, enhancing cross-ventilation, and the distribution of various private spaces and varying volumes are planned in order to account for the diversity of usage based on the time of the day and privacy required — which takes from the layout of a traditional haveli (Indian home). 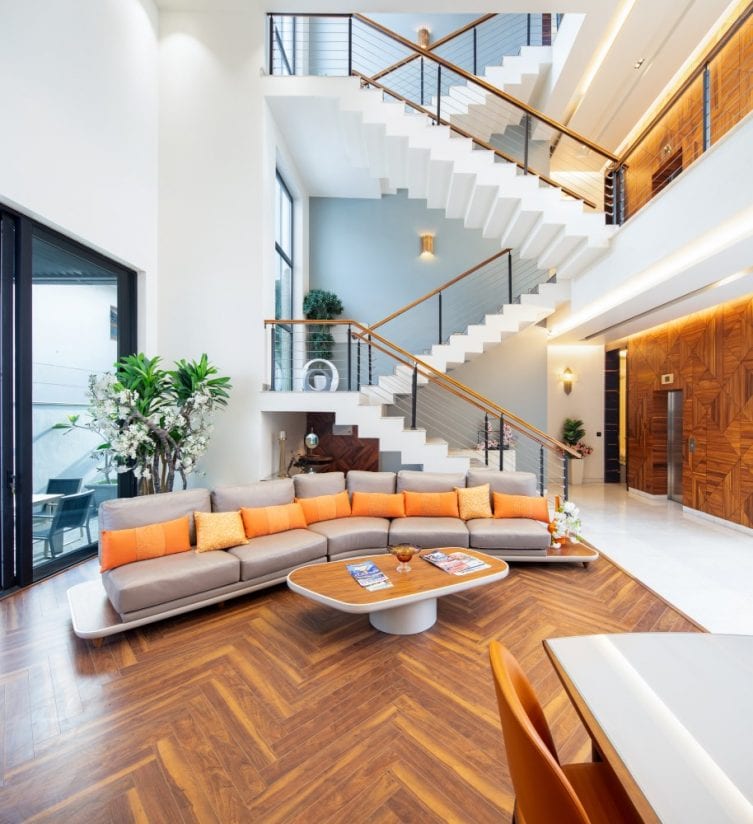 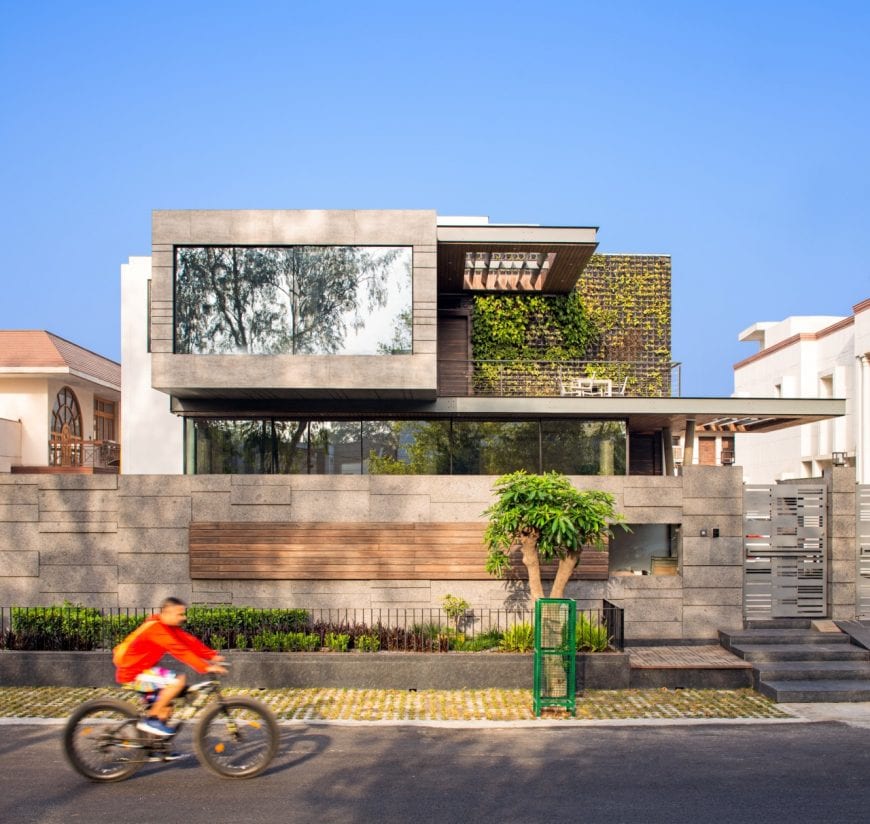 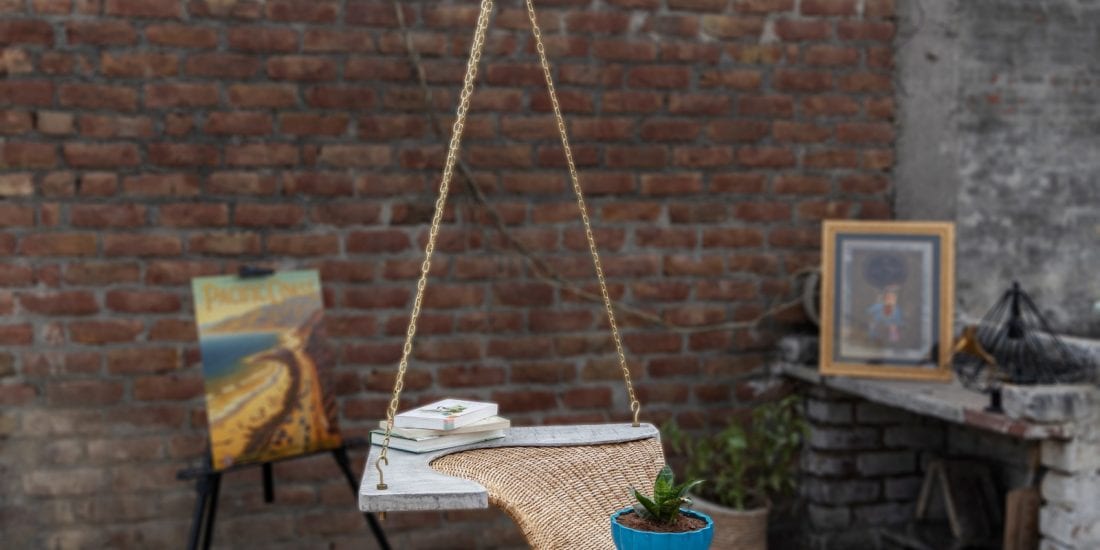 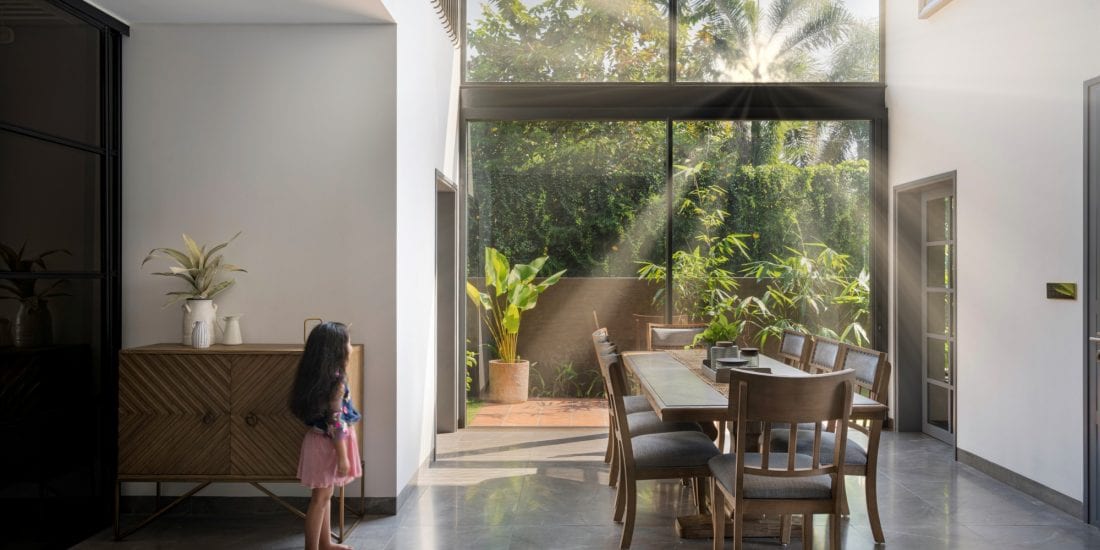 A red-stone facade European flavoured home in Kochi, Kerala for a businessman who travels the world sits 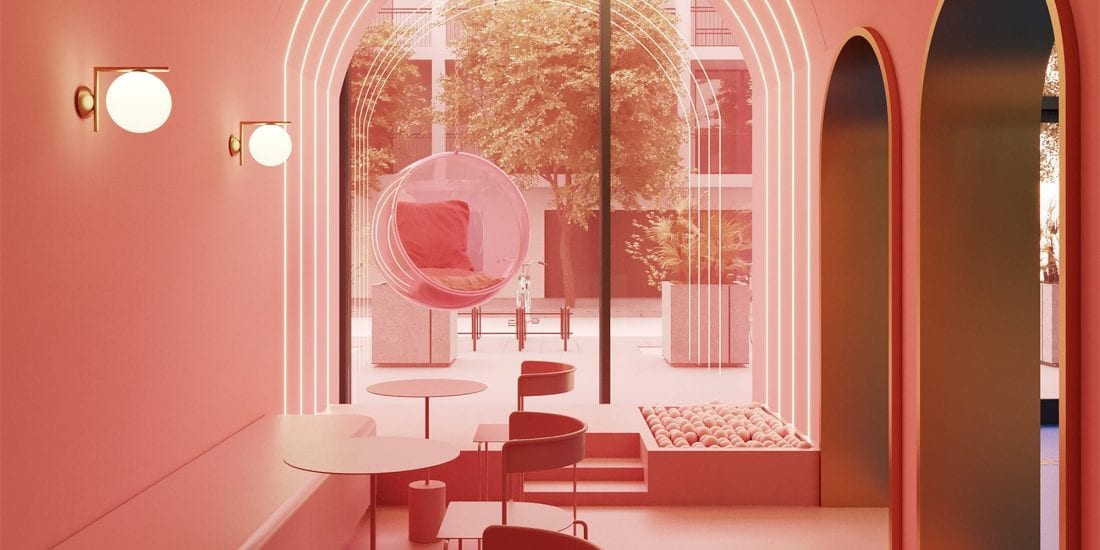 On Cloud 9 with Cloud and Co.

Cloud and Co. is a traditional gelato store located in Msheireb, Doha, Qatar, with an unconventional interior