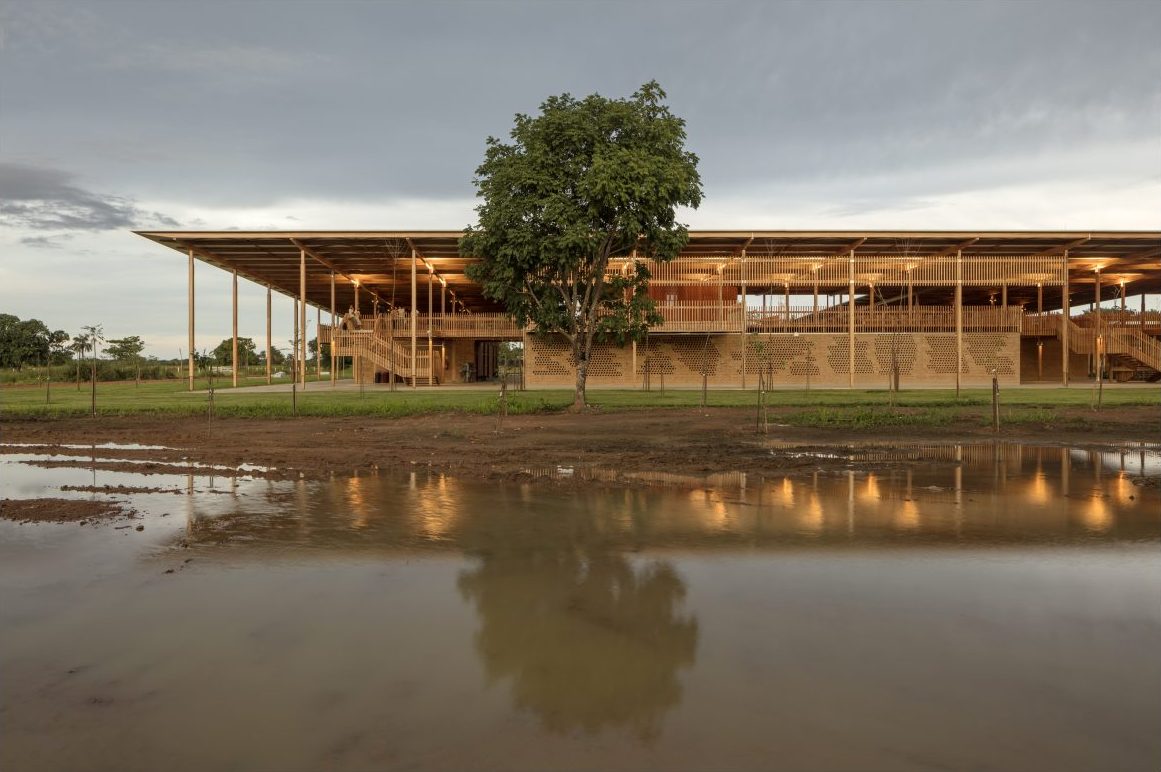 The Children Village was the RIBA International Building of 2018

Scale shines light on a rustic boarding facility for students, designed by two local Brazilian firms, Aleph Zero and Rosenbaum that embodies an architectonic ambition which provides a significative social impact to the community it is embedded in. 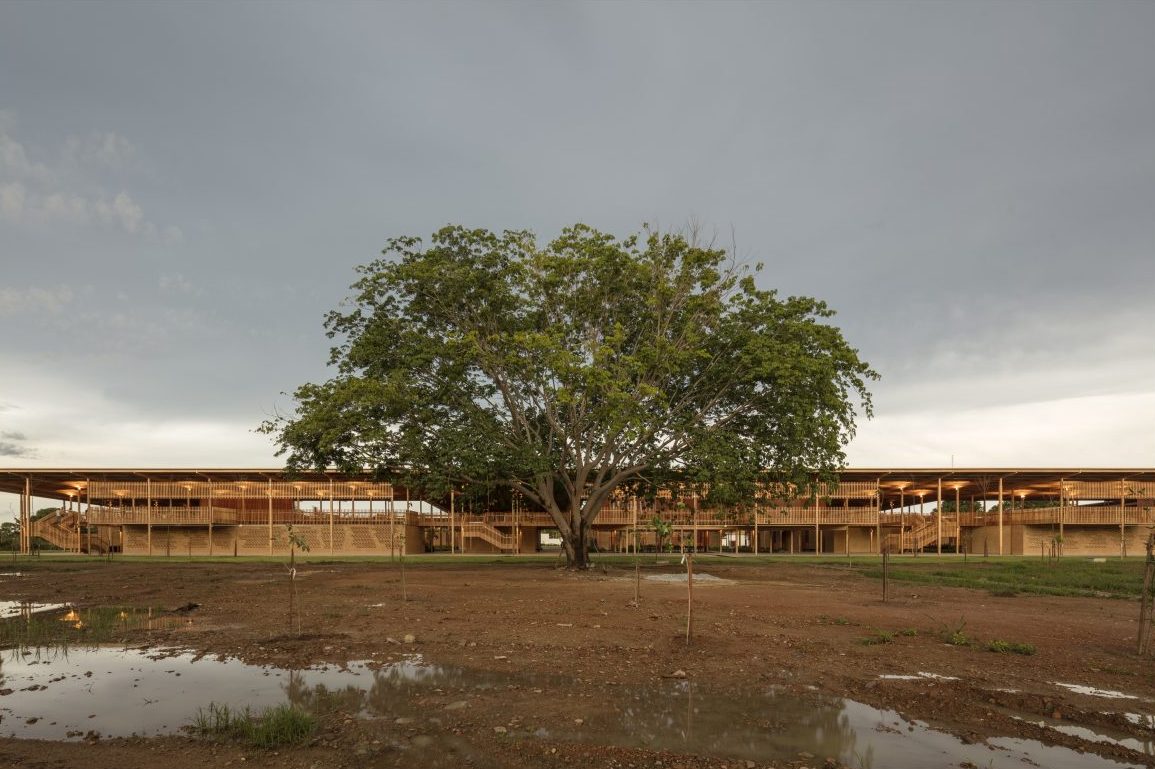 The ‘Children Village’ is a complex that provides boarding accommodation for 540 children aged between 13 and 18, to one of the 40 schools run by Bradesco Foundation. The Foundation provides education for children in rural communities across Brazil. 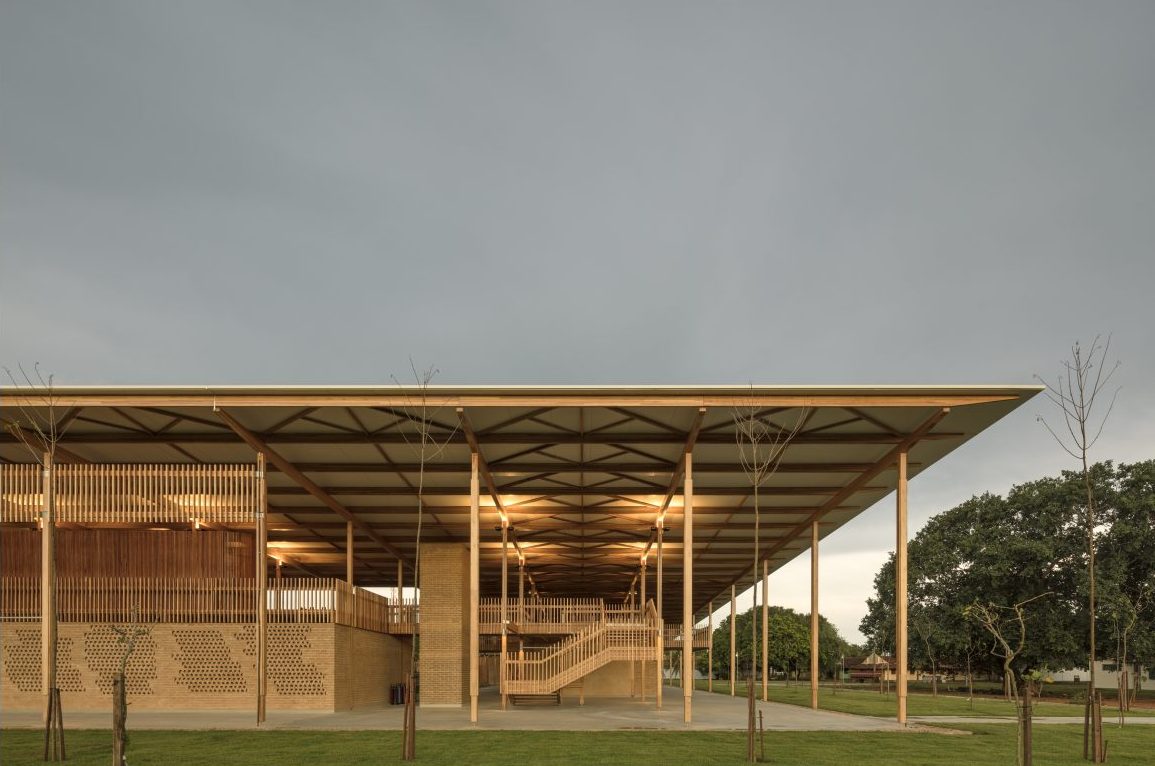 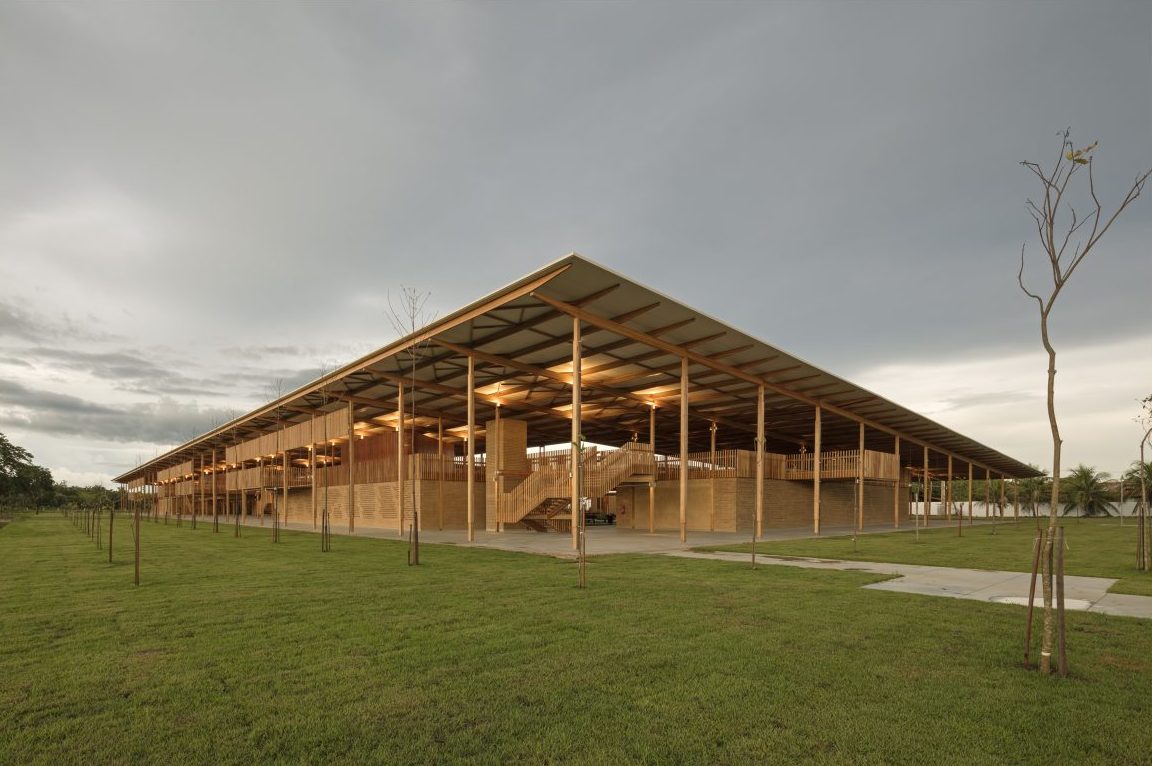 The farm-school of Canuanã is as monumental as the local landscape. Placed on the countryside of Tocantins, in Formoso do Araguaia, it is a rural school that runs as a boarding school. It holds approximately 1,200 children and it has been supported by Foundation Bradesco for almost 40 years. The school farm is recognized as the largest wooden construction in Latin America with approximately 39,000 cubic feet of reforested wood.

Rosenbaum a multi-disciplinary design firm based in Brazil accepted the challenge of redesigning the dorms of the 11 to 18-year-old students at the foundation’s invitation.

“Architecture and design are tools of social transformation which are generated from the confluence between nature and the human hand,” say the designers as they began the process of understanding the social context before delving into the design aspect of the dorms. 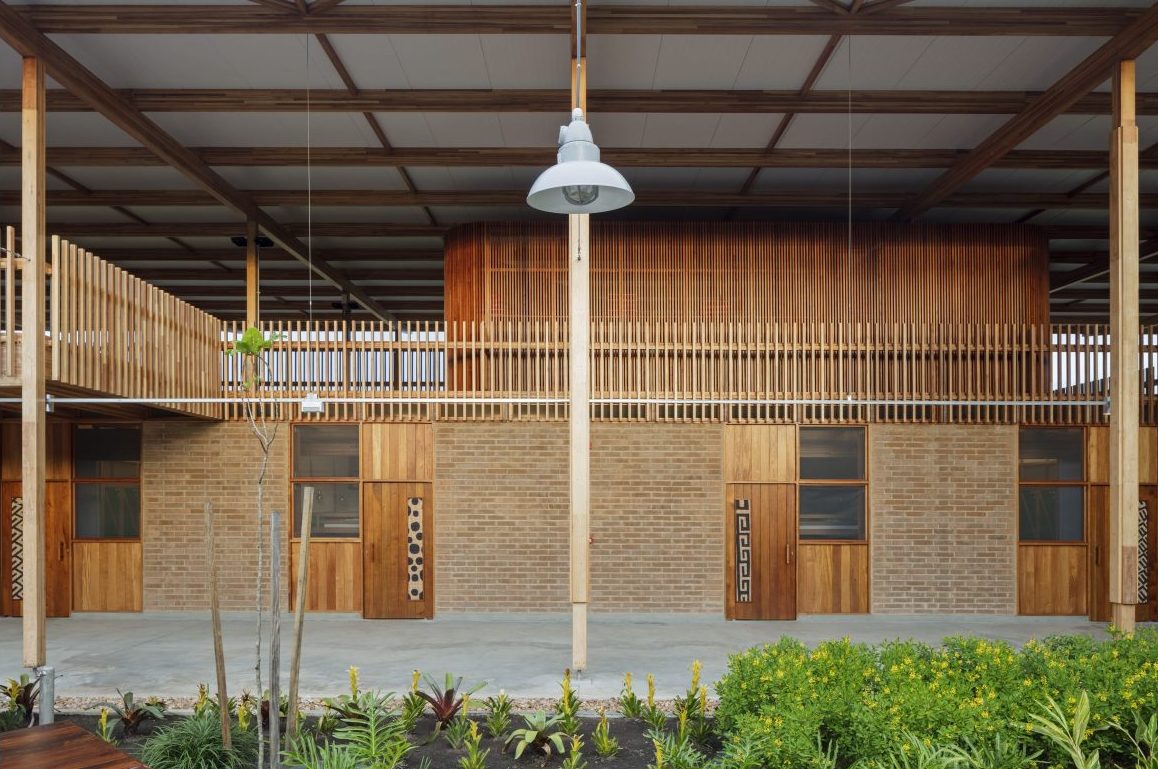 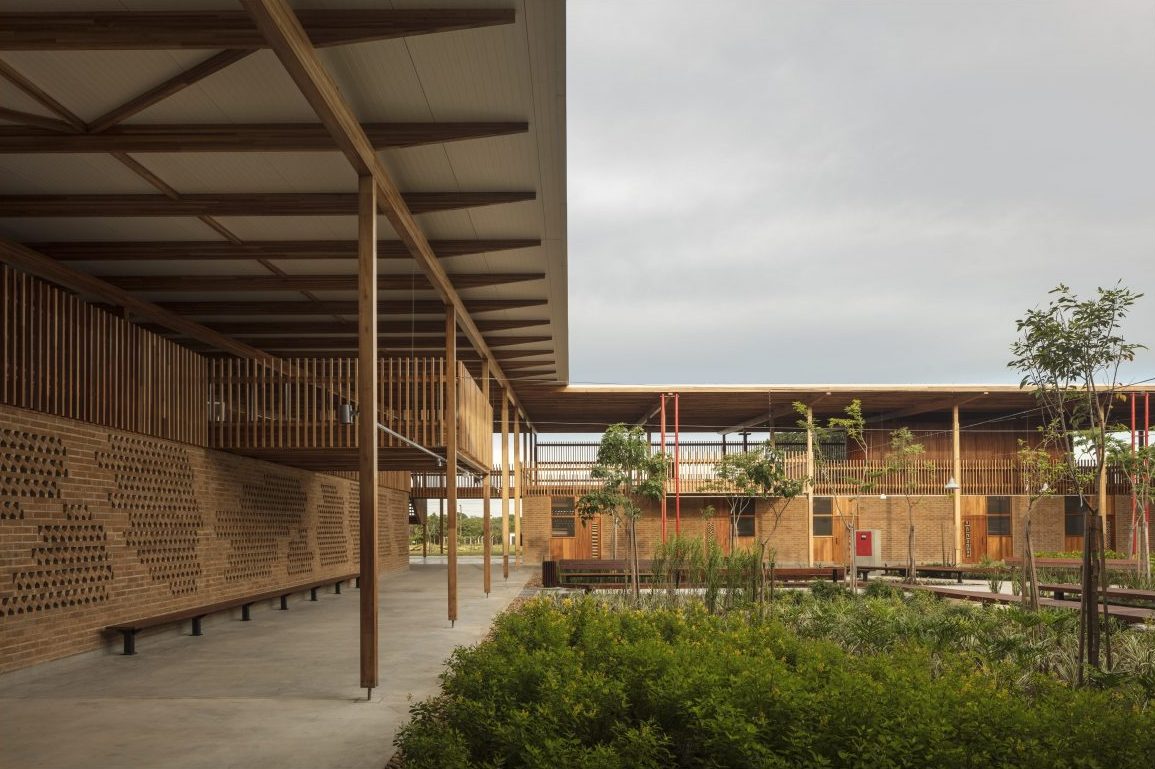 “The architectural project has become an opportunity of developing an inclusive procedure that incorporated issues such as heritage and territory for public and private spaces, managing build places, understanding how the spaces and the roots afford the establishment of effective bonds, identity, and belonging. In order to join us in a project and the development team, we invited the young architecture office Aleph Zero,” says Marcelo Rosenbaum who leads Rosenbaum, a design, architecture, and innovation office that generates values ​​based on original ideas, inserting cultural identity in they do. There are 540 children and teenagers, offspring of settled families, indigenous Brazilians and half-breed, living on the countryside of the north-central of Brazil.

The project was conceived in a sequence of immersions that enabled the architects with a broad vision of context to further develop a project strategy. With regular interactions with students on a daily basis and by understanding their immediate concerns and needs, the architectural team came to the design and materiality of the place. 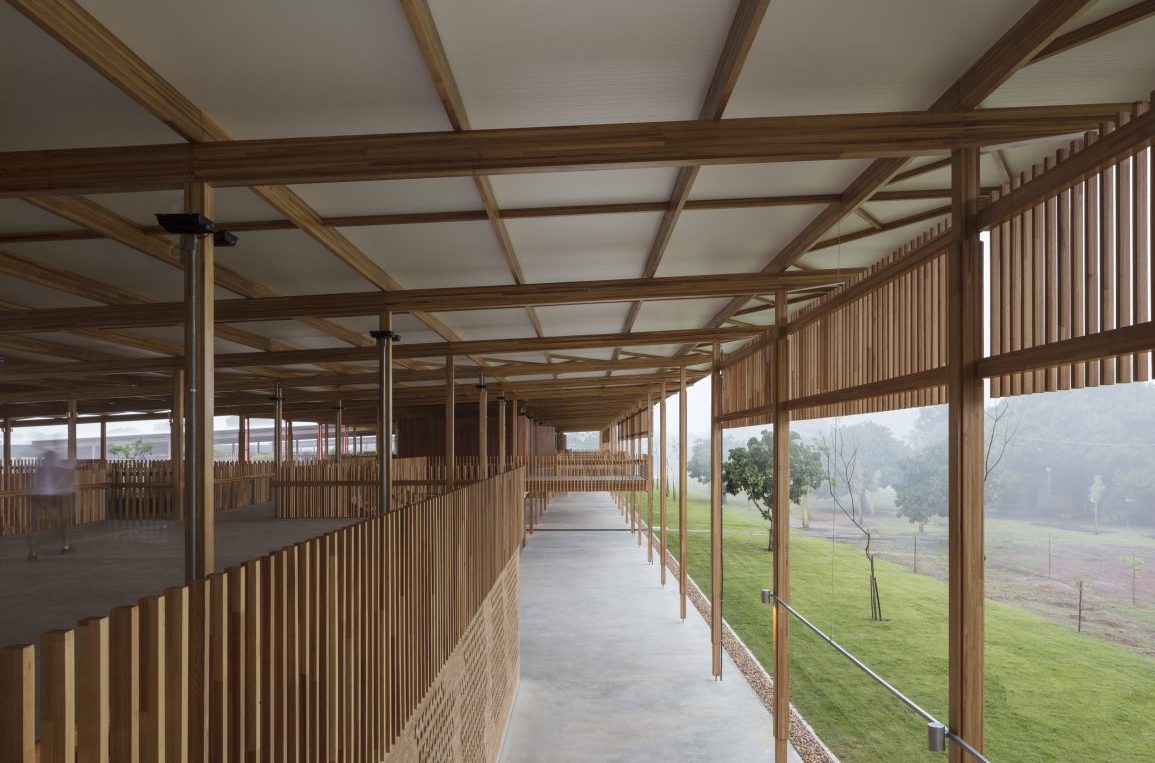 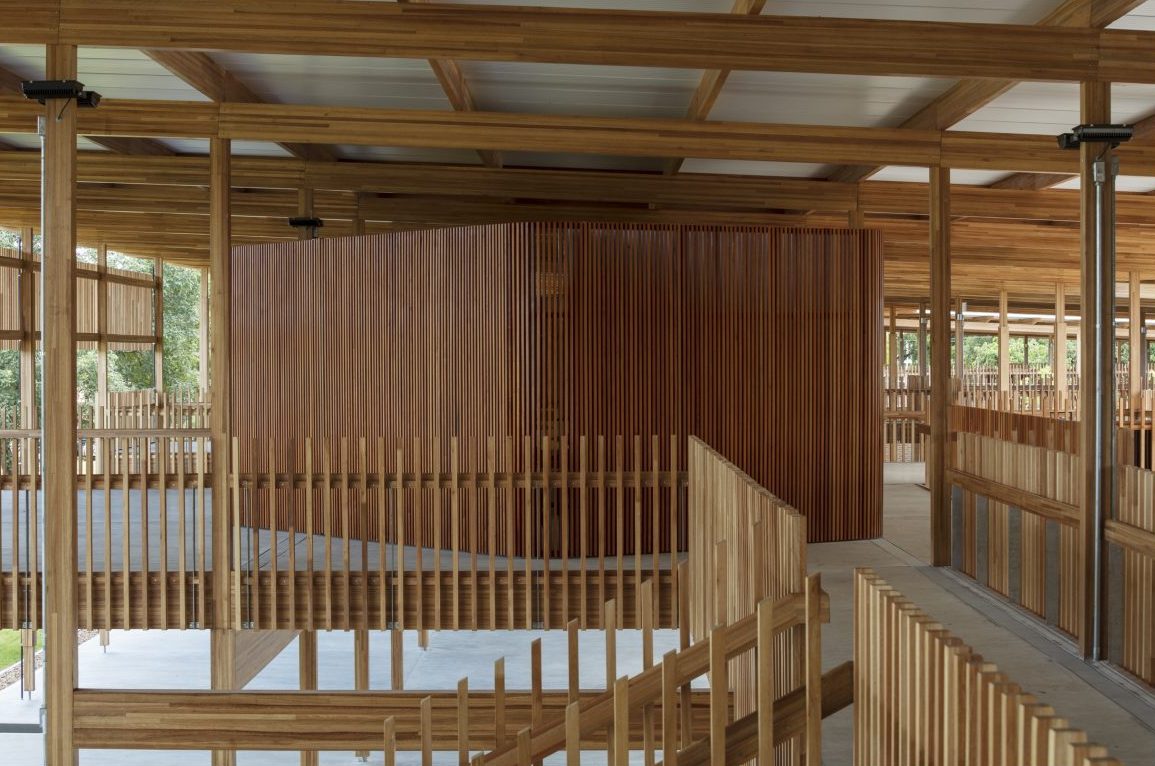 “The first immersion was focused on getting closer to the students that reside on the school. Such dialogues enabled us to understand that children didn’t recognize the school as home even after living there for 13 years. This was the driving force of all the following phases,” says Marcelo Rosenbaum.

Afterward, the designers initiated the identification of the children’s background and ancestry roots, an observation of references and experiences they brought with them in form of affection, the memory of comfort and empirical technologies applied on the construction of their parents’ and grandparents’ houses, reversing what seemed to be an apparent scarcity into a universe of abundance.

“It was a deep dive into the local indigenous and half-breed Javaé culture, people that preserve the knowledge that comes from being in touch with nature, the climate and severe rainfalls, in order to bring to the project a dialog between space, memory, and imagination.” 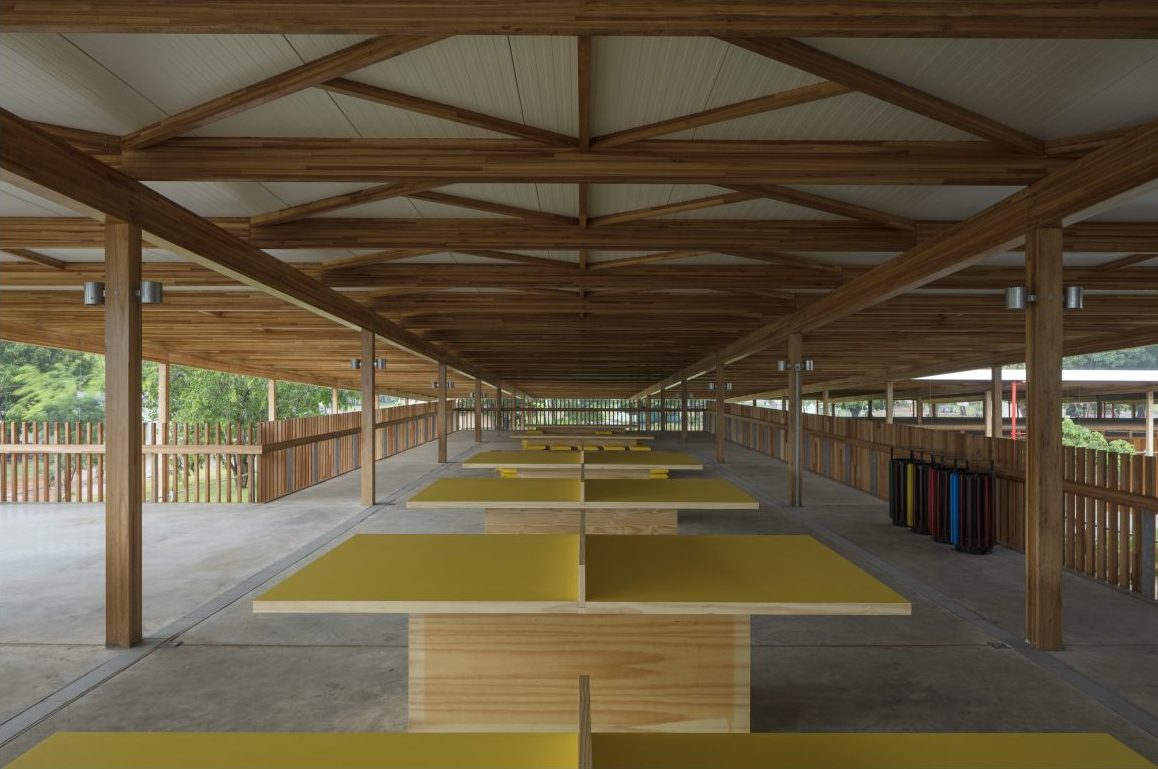 The firm started with the micro-space, defining with the students the number of people per room, the distance between beds and the room distribution all in a collaborative way, which ended up configuring the blueprint with patios.

“The project was born as a result of putting the children’s creative voices and their needs at the center.” 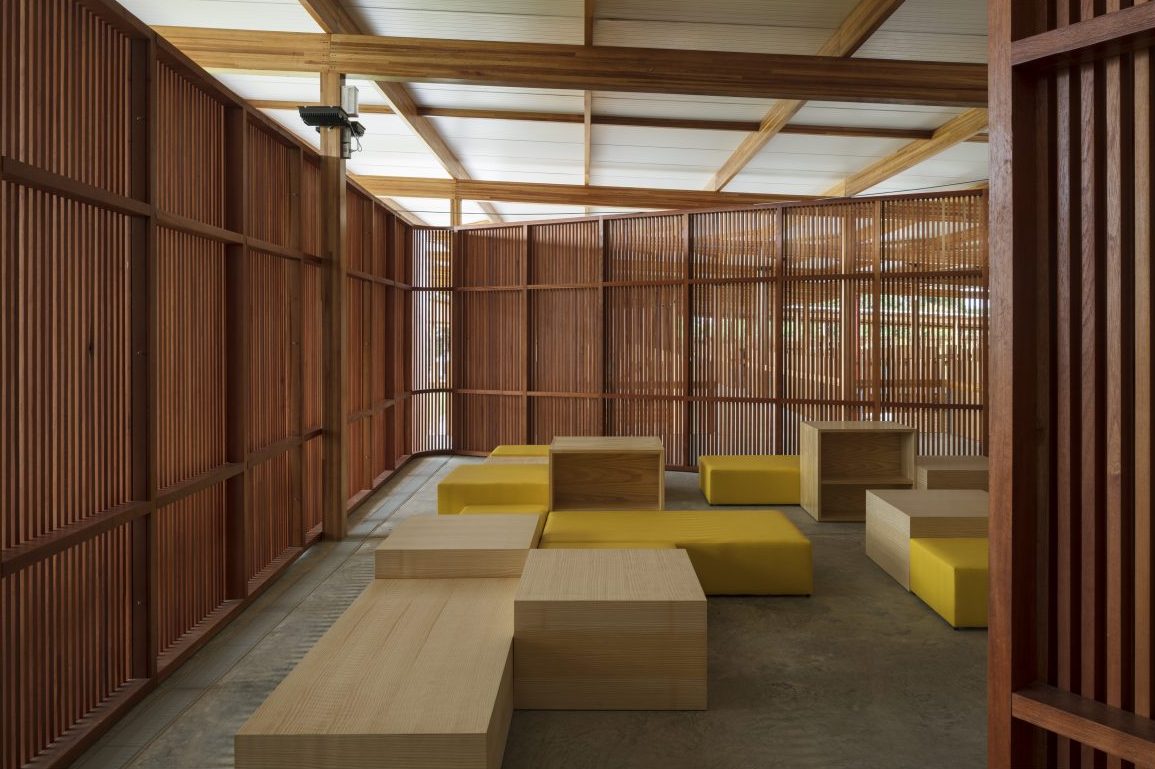 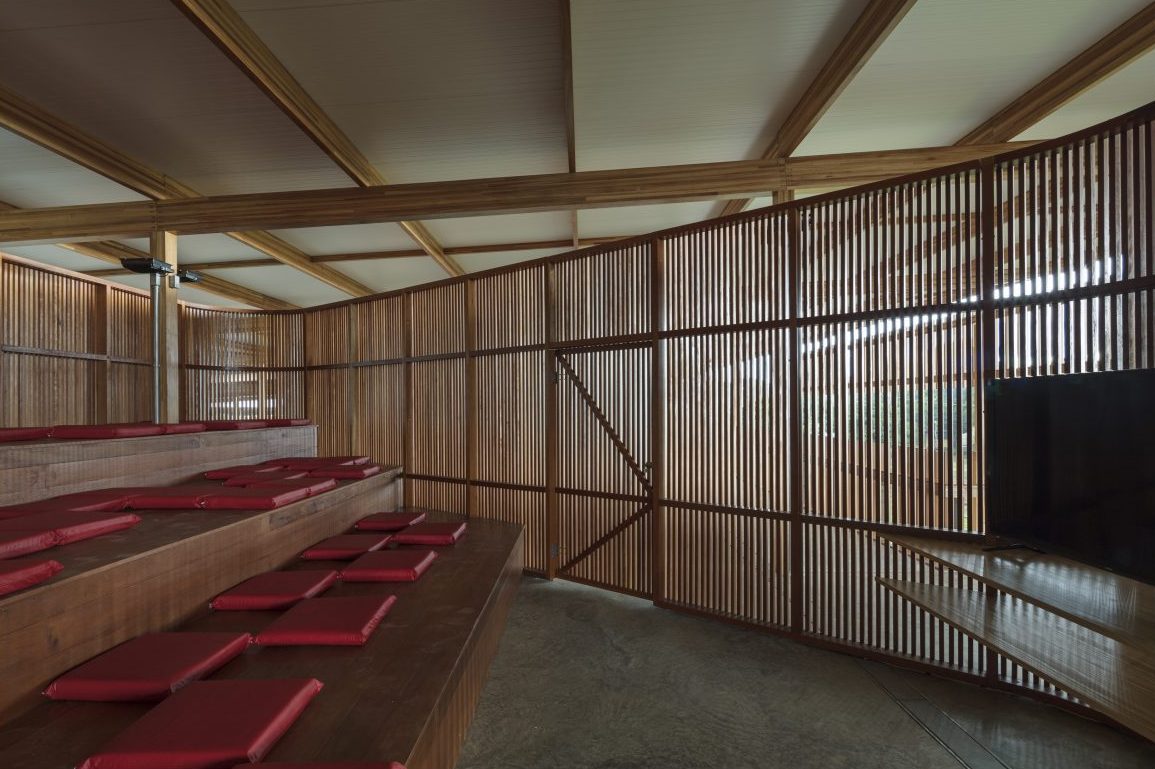 The new housing is organized in two villages, one for male students and the other for female students arranged with three bunk beds in a room, with laundry room and bathroom. The furniture was entirely conceived in order to create both privacy and collectivity at the same time. Resting under an extensive shadow, every residence had three large central patios that recreate a backyard with the local landscape, integrating the inside with the outside. There is a layer of freshwater on the central flower bed that collects the water from the roof and return its excess to the Javaé river for the constant dialog with nature. The backyards and patios are resting areas with benches and hammocks that allow the children the possibility of quietness, isolation and also integration with other kids. 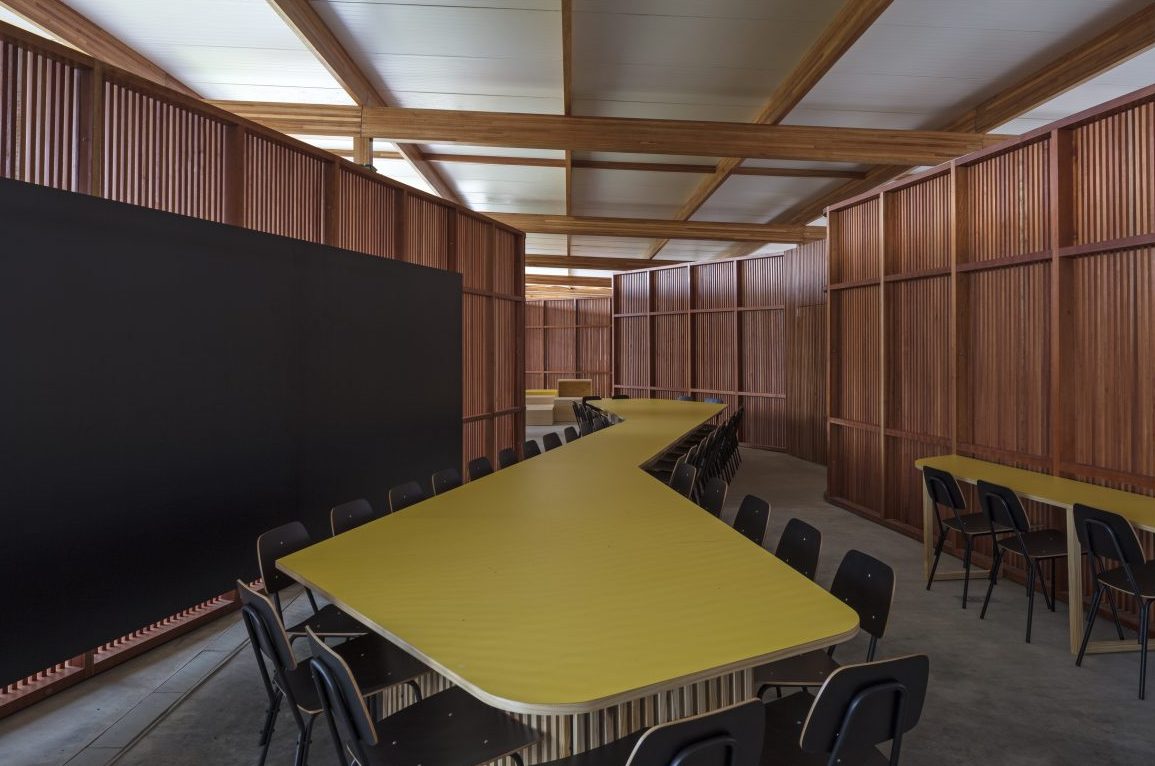 On the top floor, the recreation, study, and TV areas integrate the residences creating a cozy atmosphere, far from the traditional lodging reference.

The buildings have a Glulam (Glued Laminated Timber) structure, high technology that enables the industrial manufacture of certified wood, allowing a light product with a low environmental impact as the outcome. 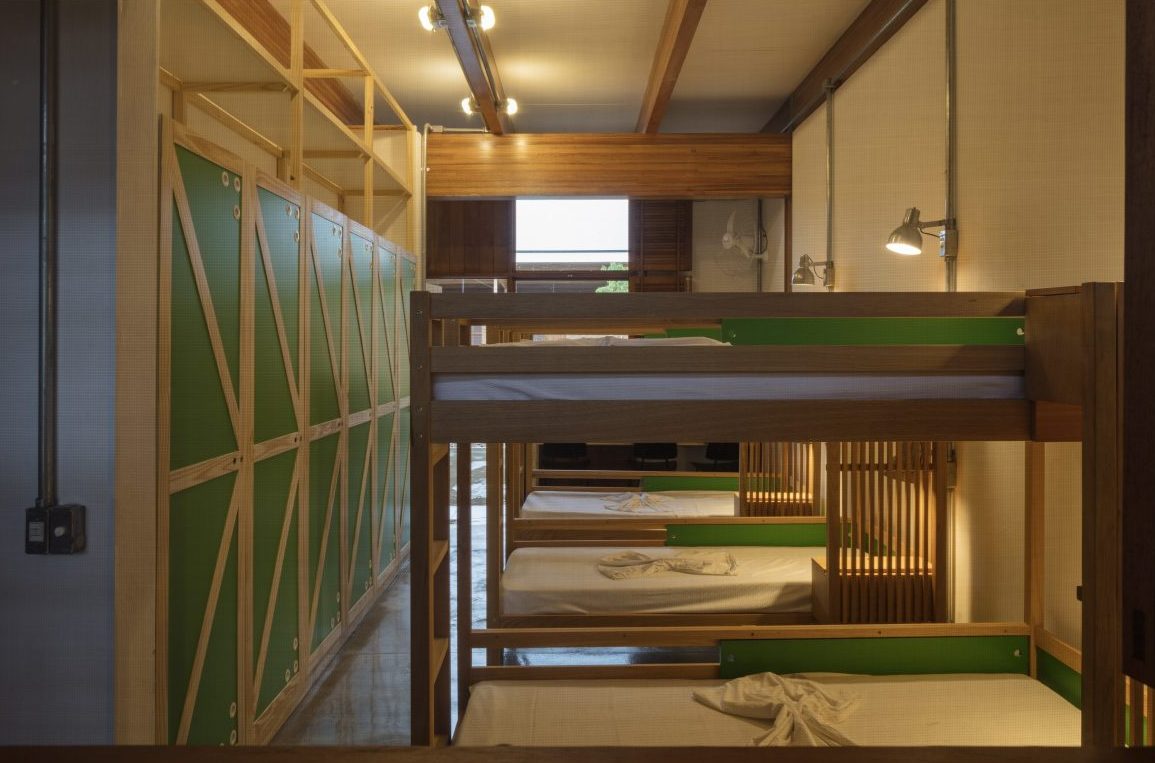 The walls were made of soil-cement brick produced on the construction site with the farm’s own soil. The bricks were pressed and molded on-site with dimensions needed to obtain the best performance and then dried out in the sun. Due to is physical properties, the bricks have the greatest inertia, reducing inside temperature. 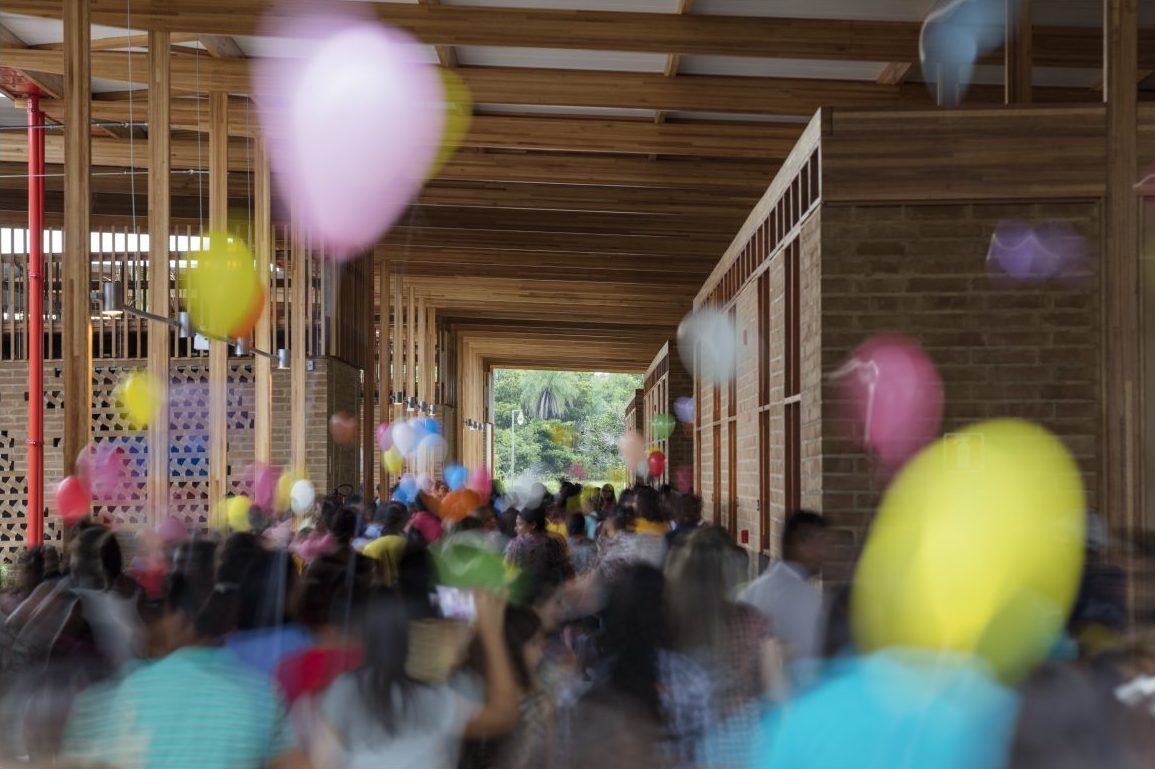 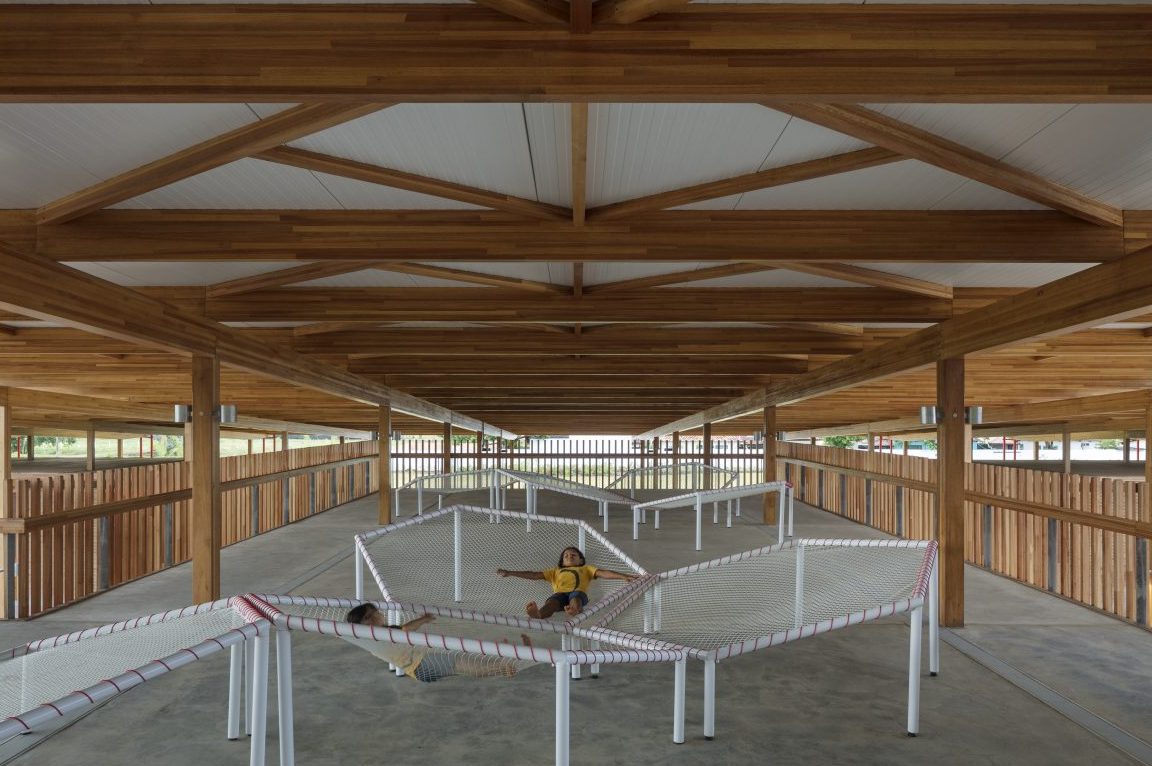 Every room was named after a local animal or plant, illustrated in indigenous graphics over the straw, crafted by the Javaés.

Students were asked and encouraged to follow the construction process so they could visit the residences while it was being built, increasing the connection the children have with their dwelling while adding their knowledge about indigenous construction methodology. 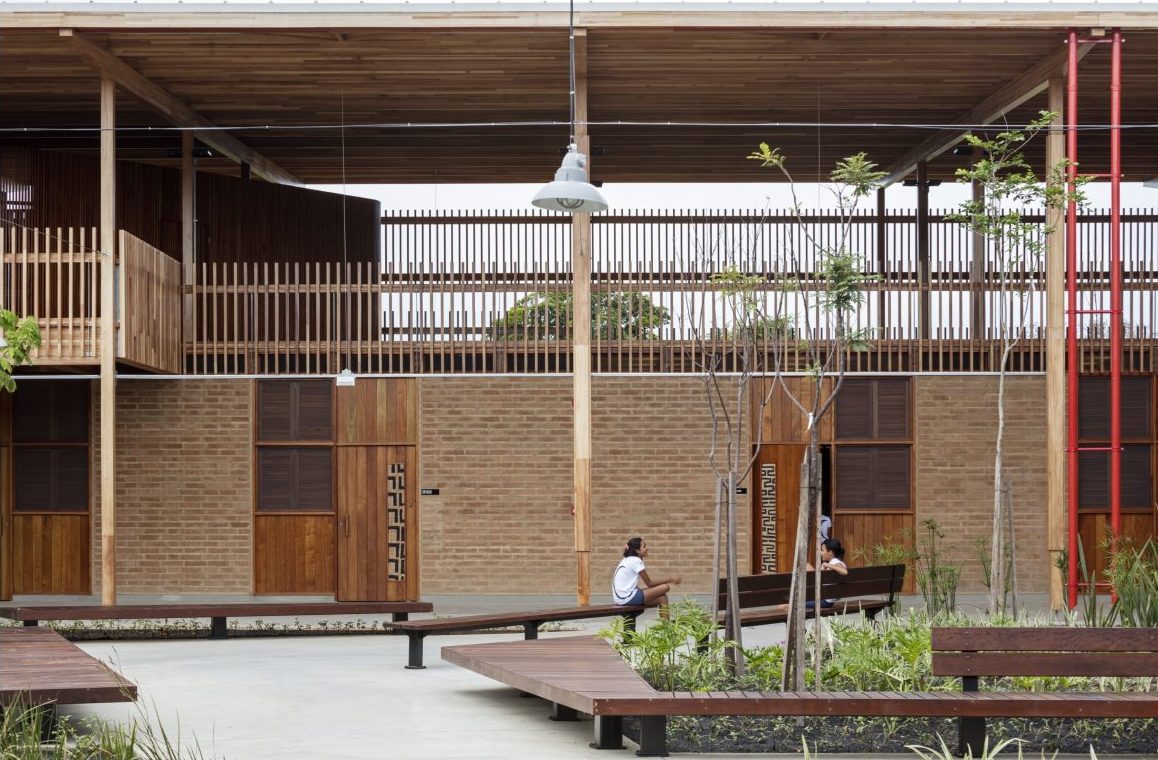 The building’s rough earth materiality, which involves local construction methods, performs well climatically and represents the connection of people and place. Earth blocks composed of local soil were chosen for their optimal thermal properties, as well as their technical and aesthetic value.

Beyond being a standout work of architecture, the Children Village embodies the generosity of Bradesco Foundation’s philanthropic mission to provide much-needed amenities to those who otherwise have limited access to schools,” said Elizabeth Diller, on behalf of the grand jury of RIBA. “Aleph Zero and Rosenbaum have achieved a humble heroism, utilising a sophisticated approach to detailing and construction that belies the fact that the building’s users are predominately teenagers, age 13-18, in a remote area in Brazil” 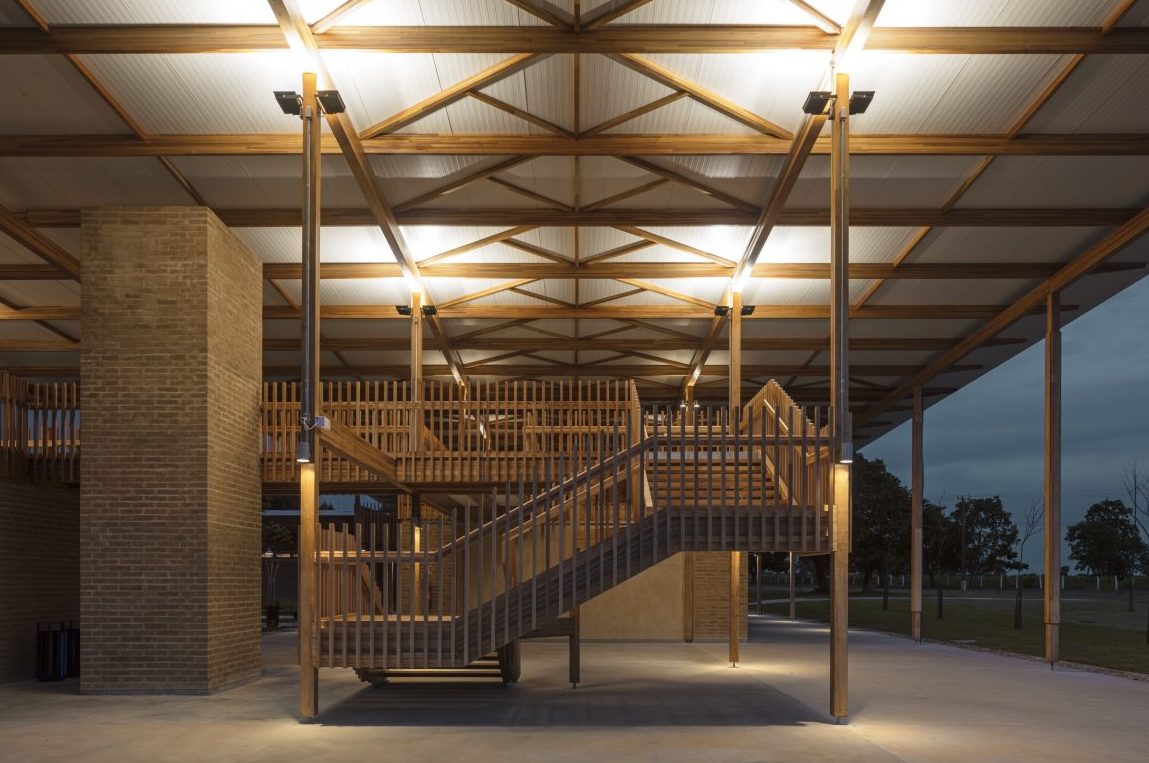