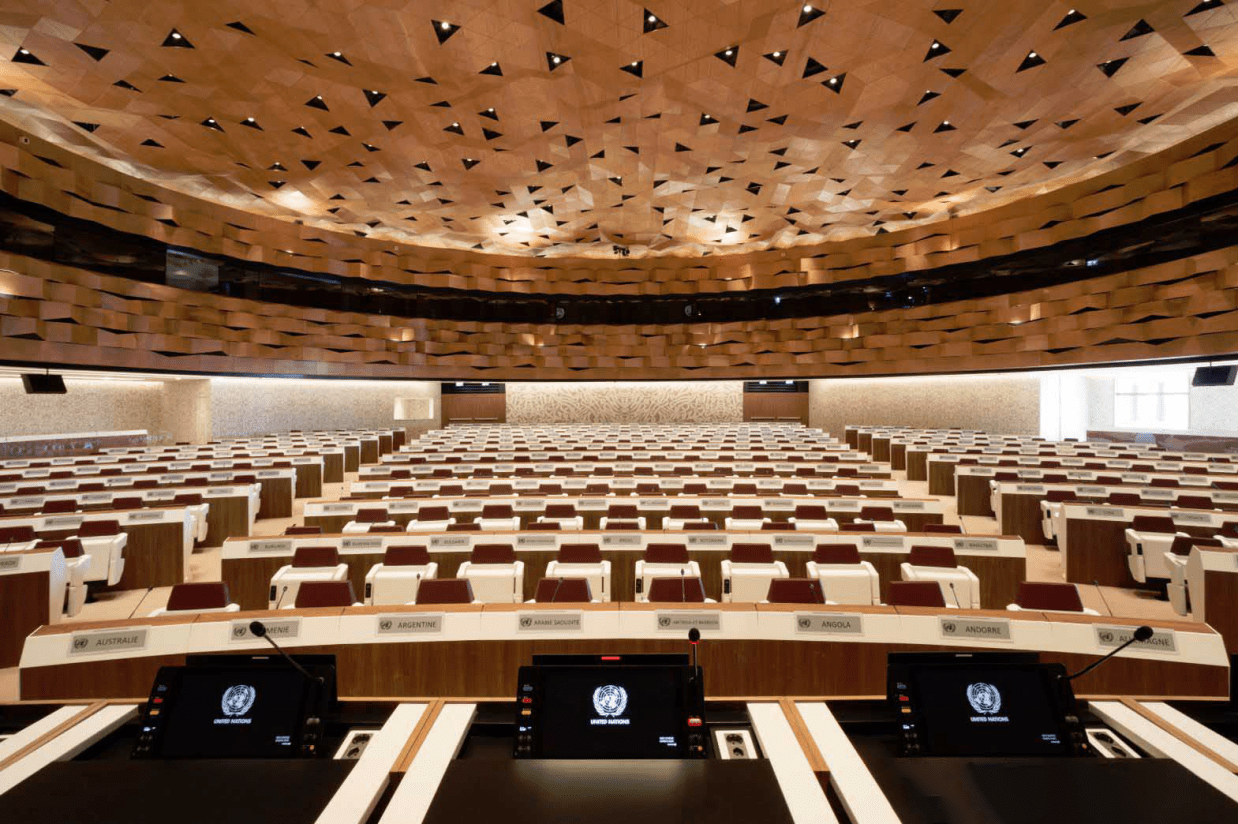 The Hall of Qatar in the UN

The XIX Hall of the United Nations in Geneva, a project that was funded by Qatar was designed by Peia Associates.

The architectural design reflects the ideals of the United Nations through its concentric and radial circular design that exemplifies the concept of equality. 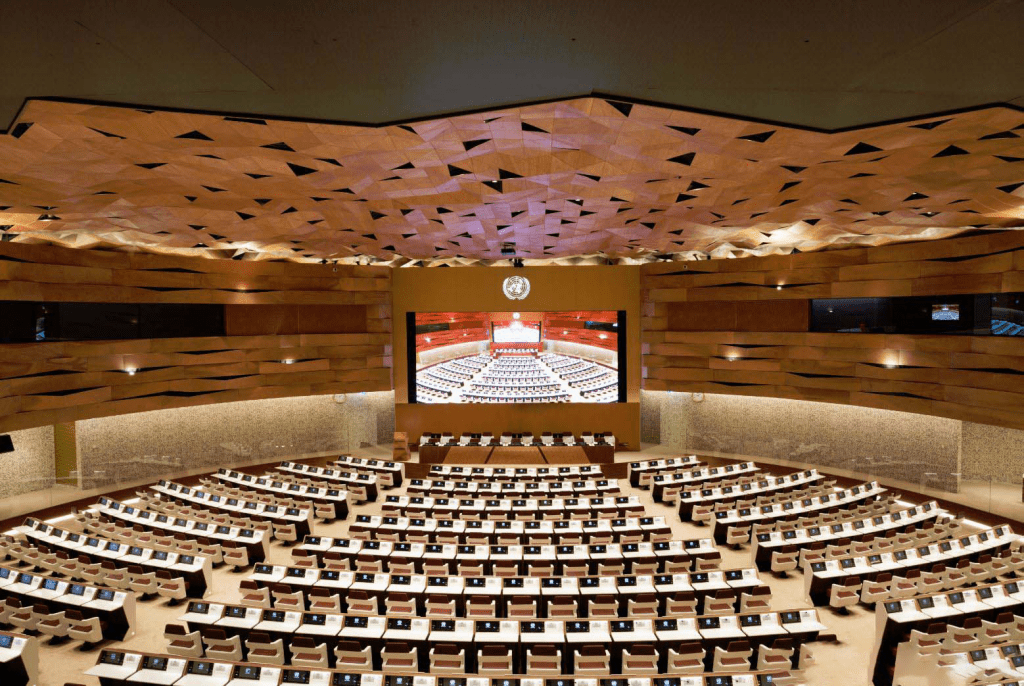 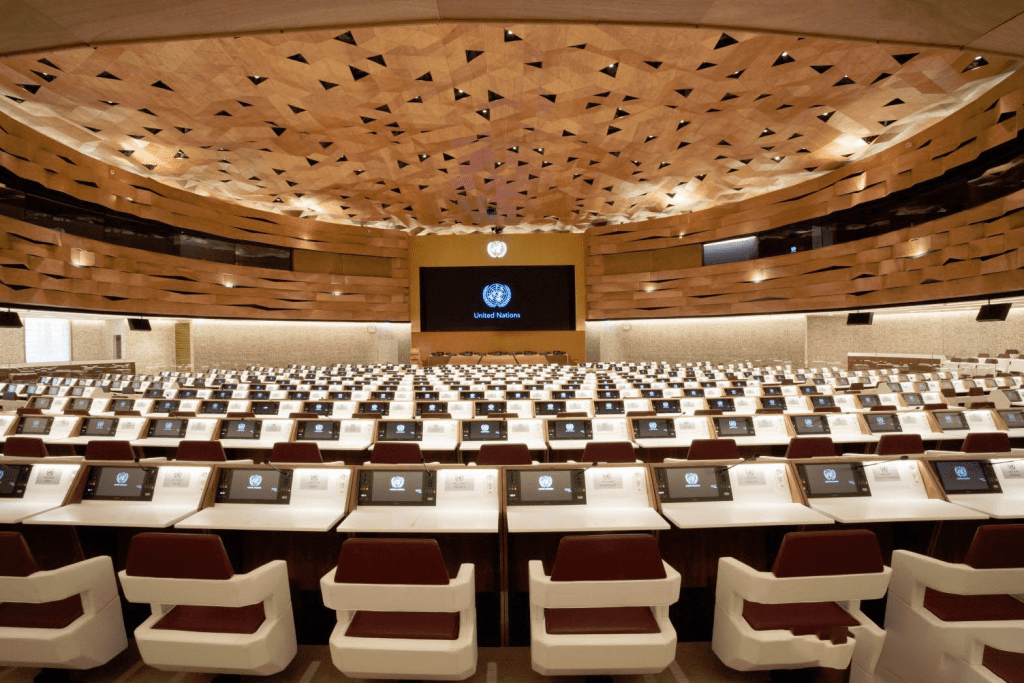 The capacity of the new XIX Hall is 800 seats, with 320 seats and desks for the delegates of the States, plus assistants, as well as observers and the press, making this Hall for Plenary Assemblies of 4000 square meters, the largest room with the most advanced technology of the UN.

The key features of this space are its ability to provide most seats with wheelchair accessibility, being the first room equipped with 10 simultaneous translation booths including, a booth dedicated to the interpreters of the sign language, which is a first in the world, establishing new standards of inclusiveness in the organization. The room is equipped with high-definition screens enhanced by a state-of-the-art lighting system and the largest 4K LED wall, guaranteeing the highest technological levels for communication. The individual 400 audio and video monitors are equipped with state-of-the-art translation systems, providing the most sophisticated tool for exchanging dialogues between all nations. The Room XIX, or Hall of Qatar, (as the “donated” rooms are traditionally called by the name of the donor country) is equipped with new high-definition motorized cameras and a new sophisticated communication system. Thus, for the first time, a UHD system enables the best image quality of the assemblies and conferences. 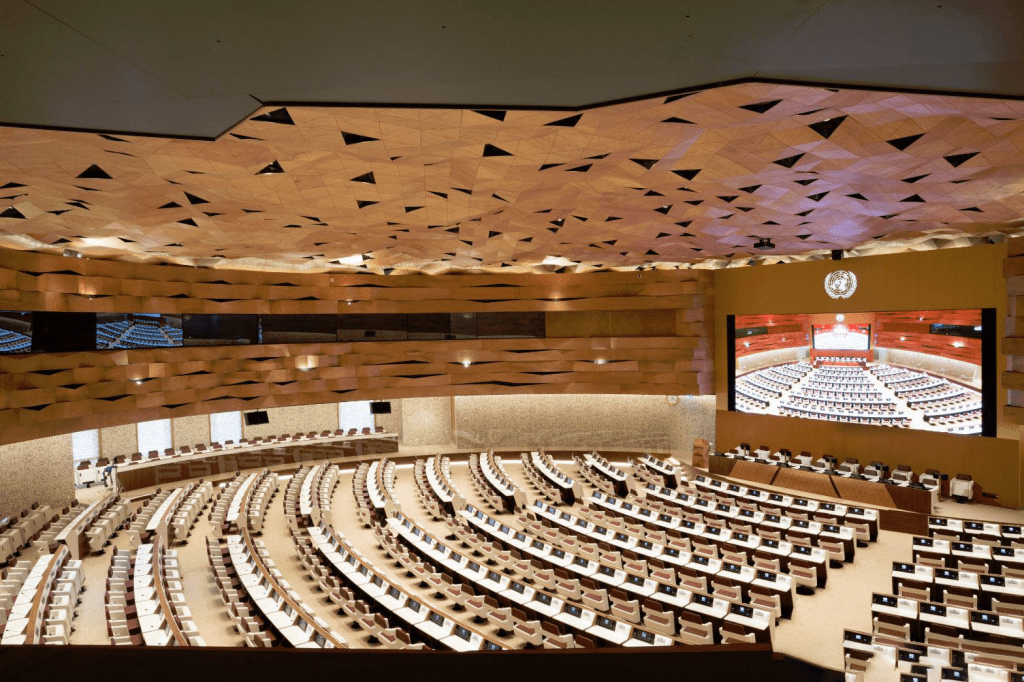 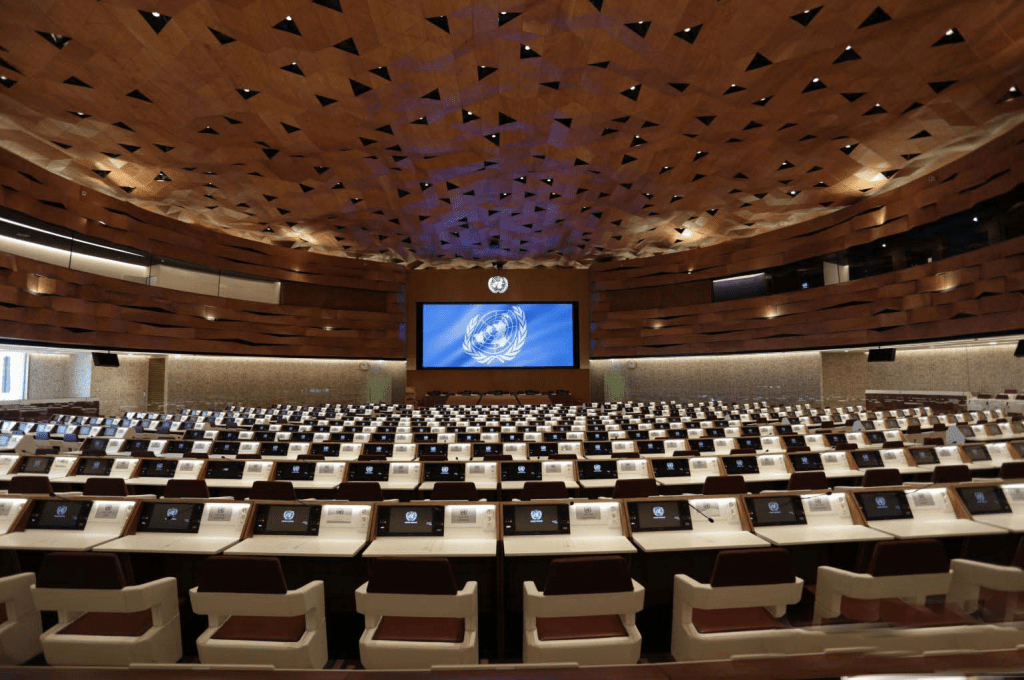 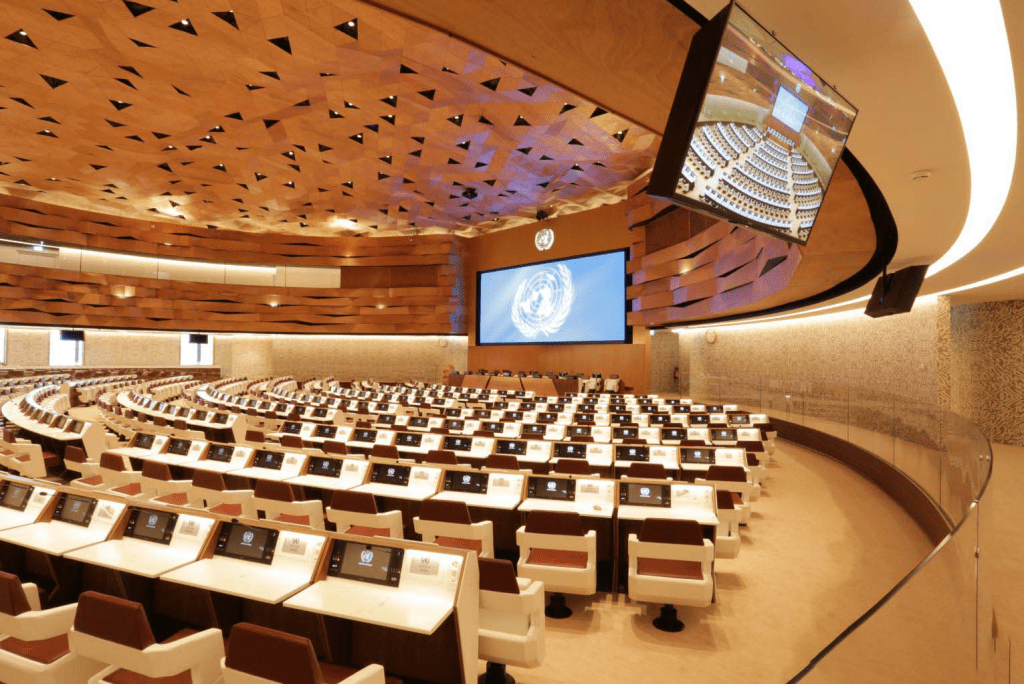 “For the first time ever an innovative and unique lighting system was installed in a conference room to maximize comfort for United Nations delegates during long meeting sessions. Using the circadian lighting system, the room can pass through different lighting scenarios that imitate the rising and setting of the sun that emphasize the sculptural irregularity of the ceiling. In order to introduce another comfortable light source, an automatic motorized opening system was introduced to offer a view of the park, Lake Geneva and the majestic Mont Blanc. The view has a motive of constantly reminding the members of the planet’s environmental emergencies, including the melting of glaciers, poles, and Iceberg that the UN is monitoring,” says Peia. 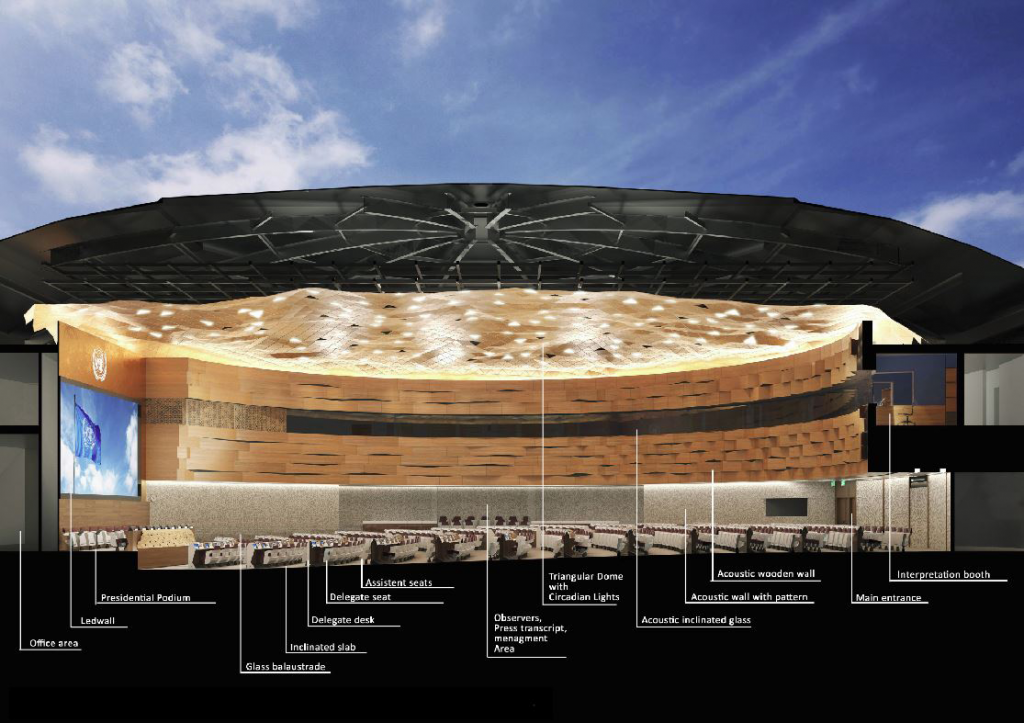 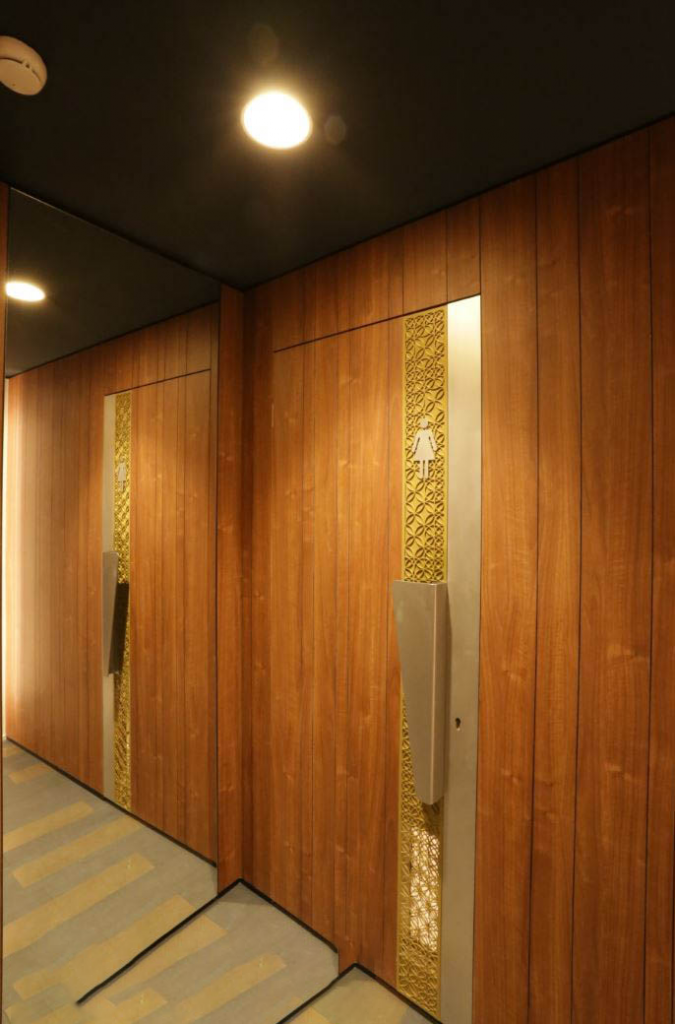 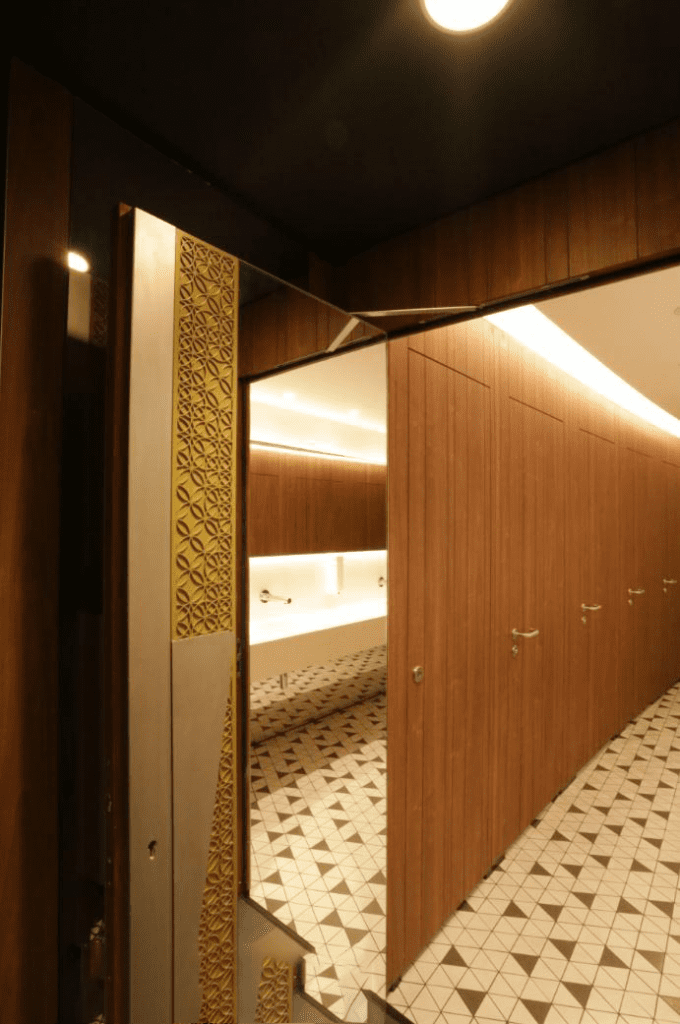 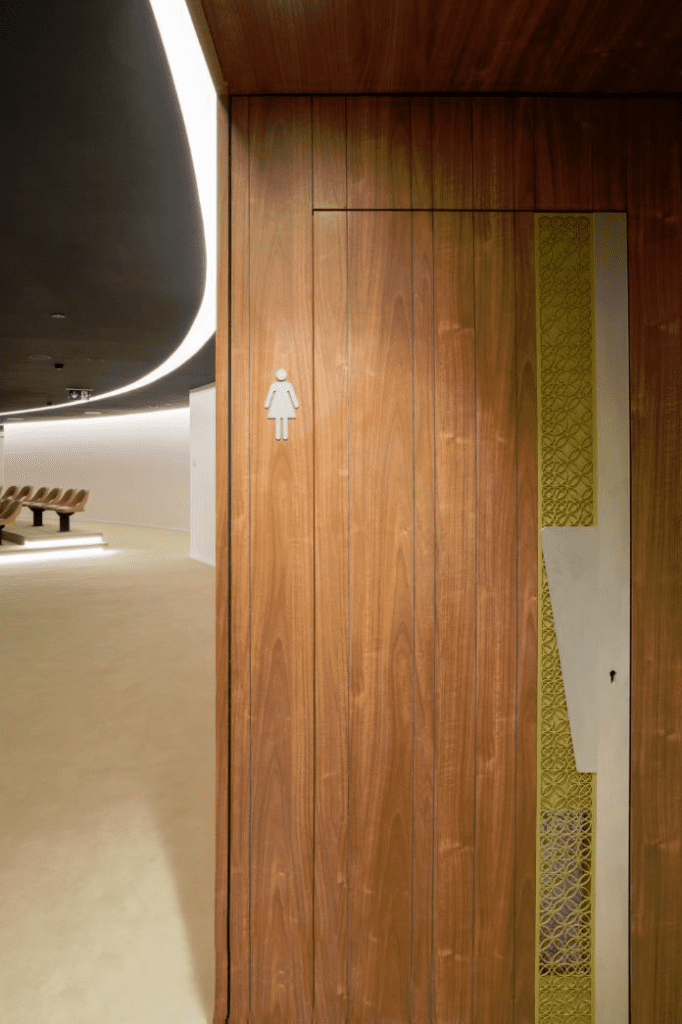 A further feature of the space is its high acoustic performance: with the help of parametric software, the shape and aggregation of 7.000 thin wooden eco-panels aggregated with a particular technology that makes them in different shape, allowing the management of high and low frequencies in the dynamic wooden architecture of the ceiling and internal walls, which covered the original wooden walls that survive in the inner layers, as a respectful “archaeological stratification”. 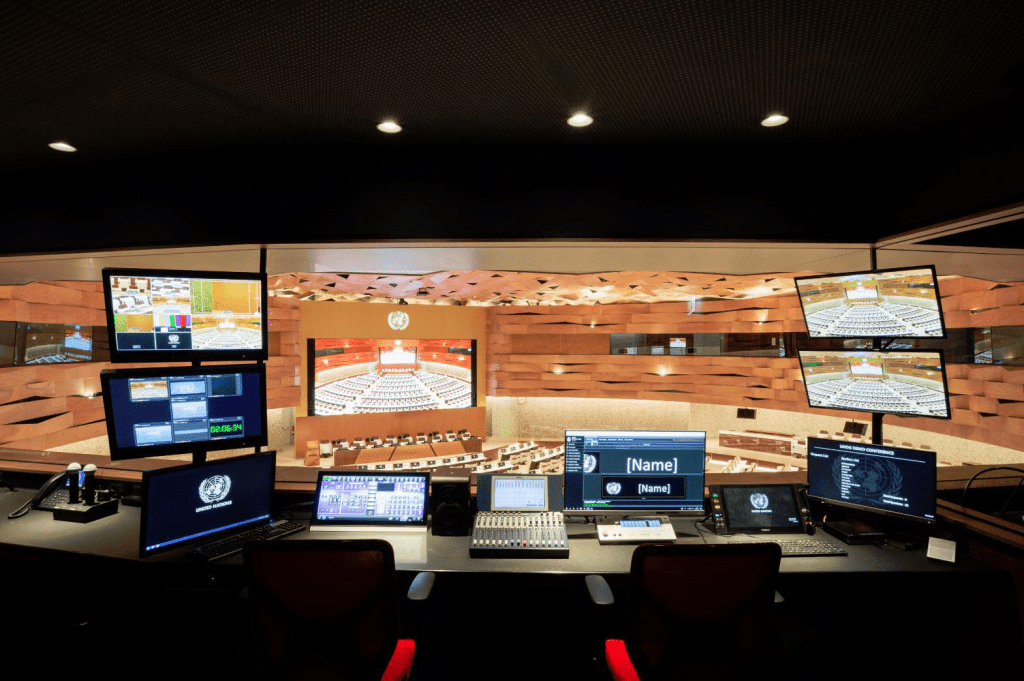 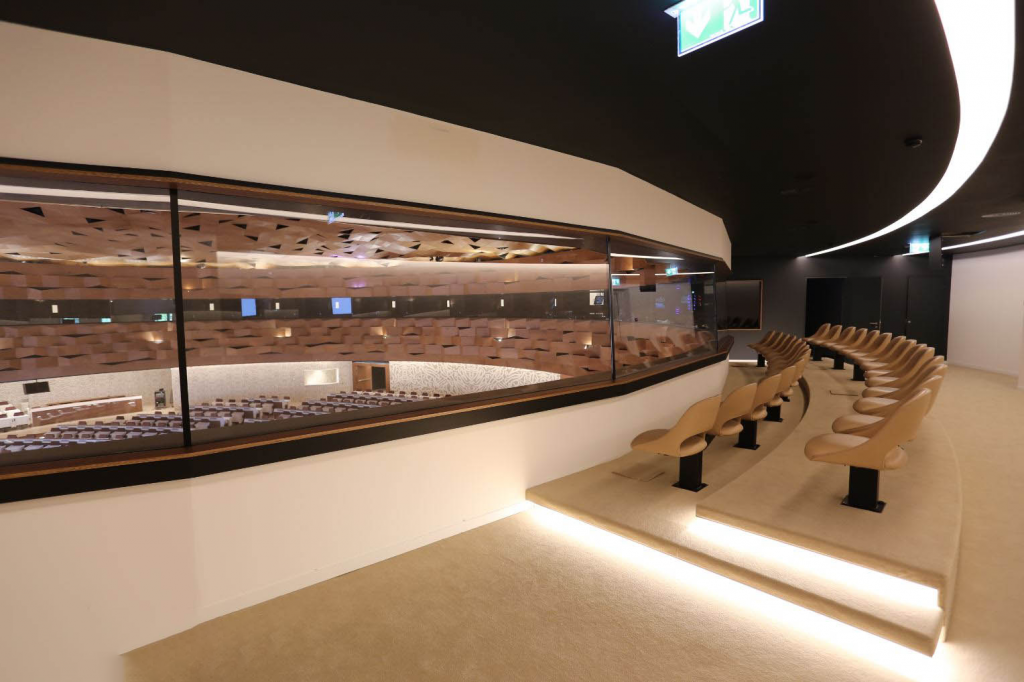 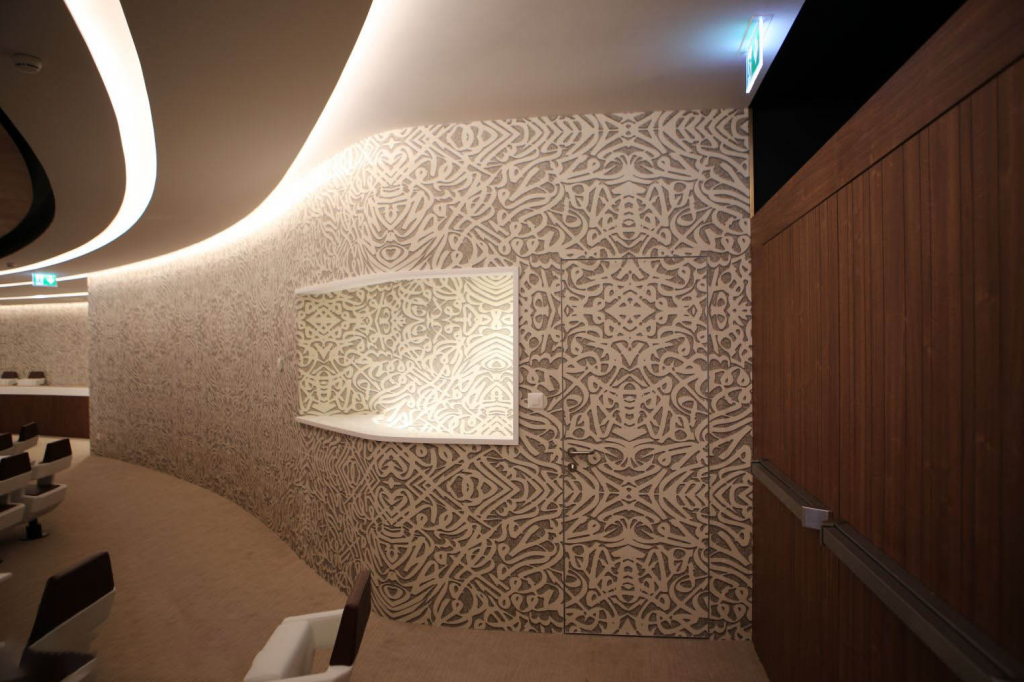 “These sculptural components represent the natural beauty of Qatar: the geometries that represent desert dunes, the sky, and the sea, break the rigorous circular symmetry of the original room, giving spatial dynamism and providing a metaphorical representation. The panels form “waves” that change shape based on the differentiation of the acoustics of the circular space, but also contain a symbolic meaning that alludes to the efforts of the United Nations to promote and facilitate peaceful and diplomatic resolutions: stormy waters calm down as they approach the presidential stage,” explains the architect.

The design is also a clear reference to the cultural values of Qatar through the use of calligraphy. The matrices and geometric patterns (Musharabya), has been reinterpreted in the project as perforated wooden acoustic panels, bronze grids, fabrics, rugs, and custom-made porcelain mosaics. 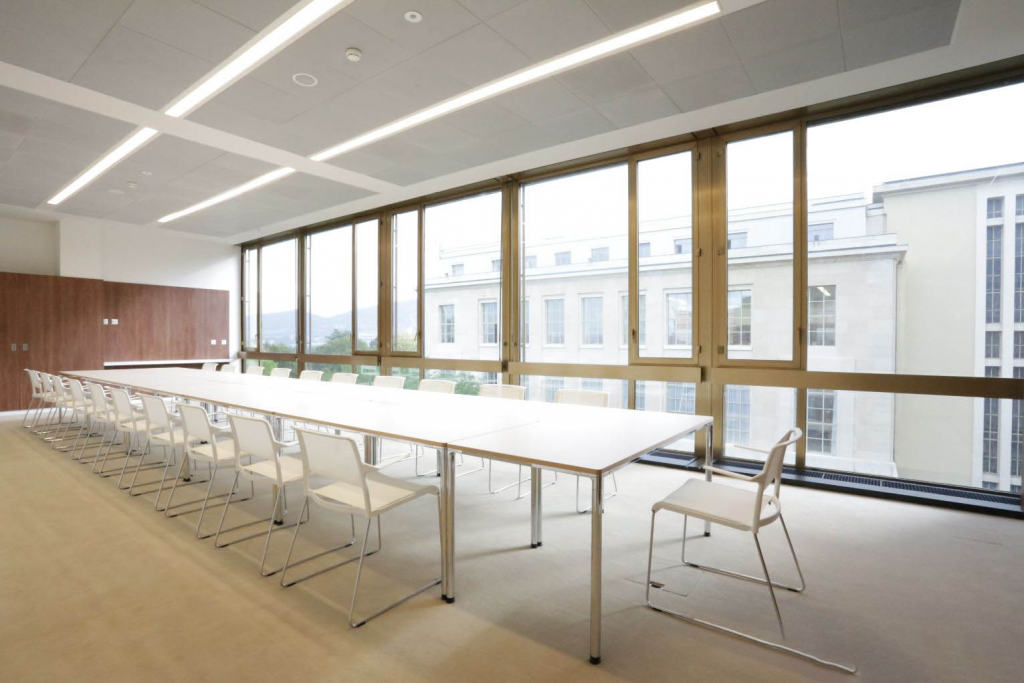 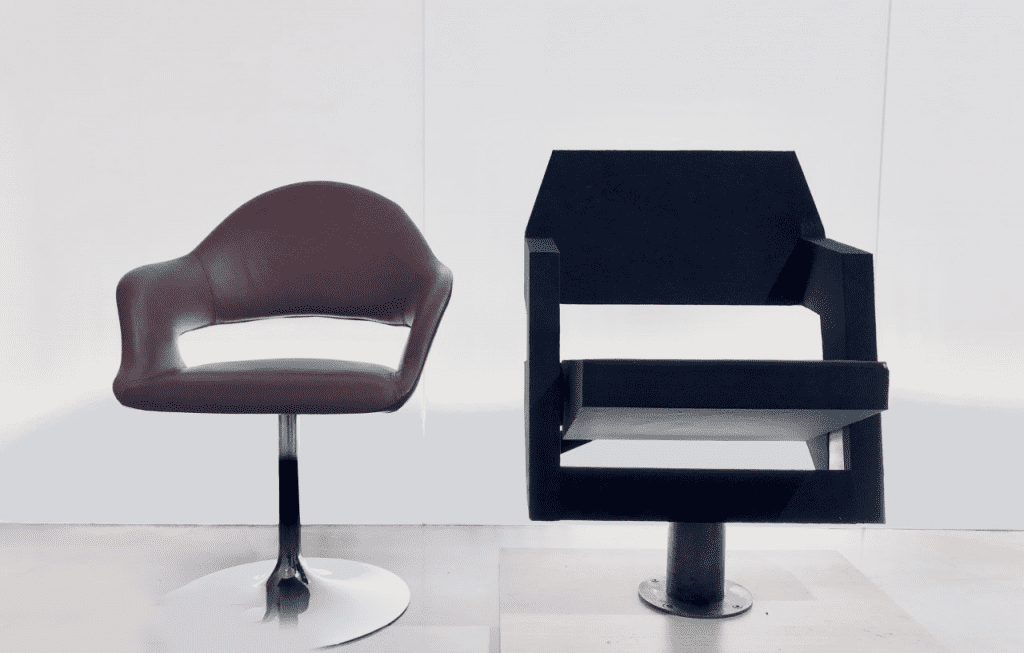 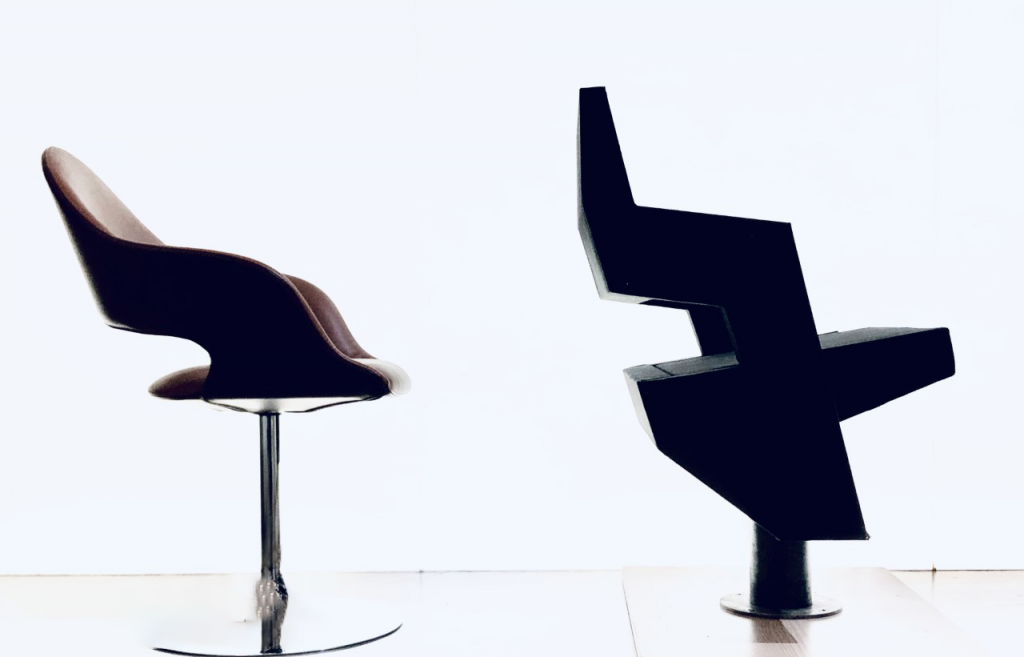 Finally, the history of the United Nations building was honored through the redesign of the chairs, as a tribute to the work of Charlotte Perriand who collaborated on the project of Building E in the 60s. While the original chairs had to be replaced due to the evacuation and safety rules that are part of the UN guidelines, 30 of the original chairs designed by Perriand, were restored and reclaimed and given a second life for visitors and schools that can participate at United Nations assemblies from the top of the mezzanine.

“We have tried to merge the identity and roots of the donor country, Qatar, with the traditions of the most important institution on earth, and through the use of subtle representation, we have tried to focus on the values that the UN seems to represent,” says Peia. 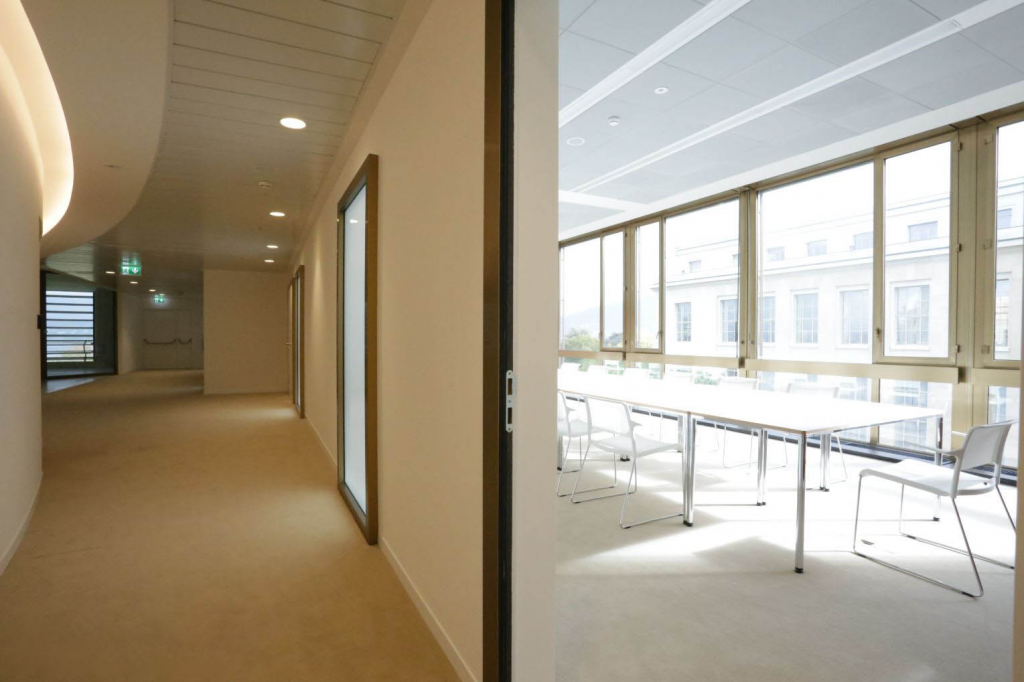 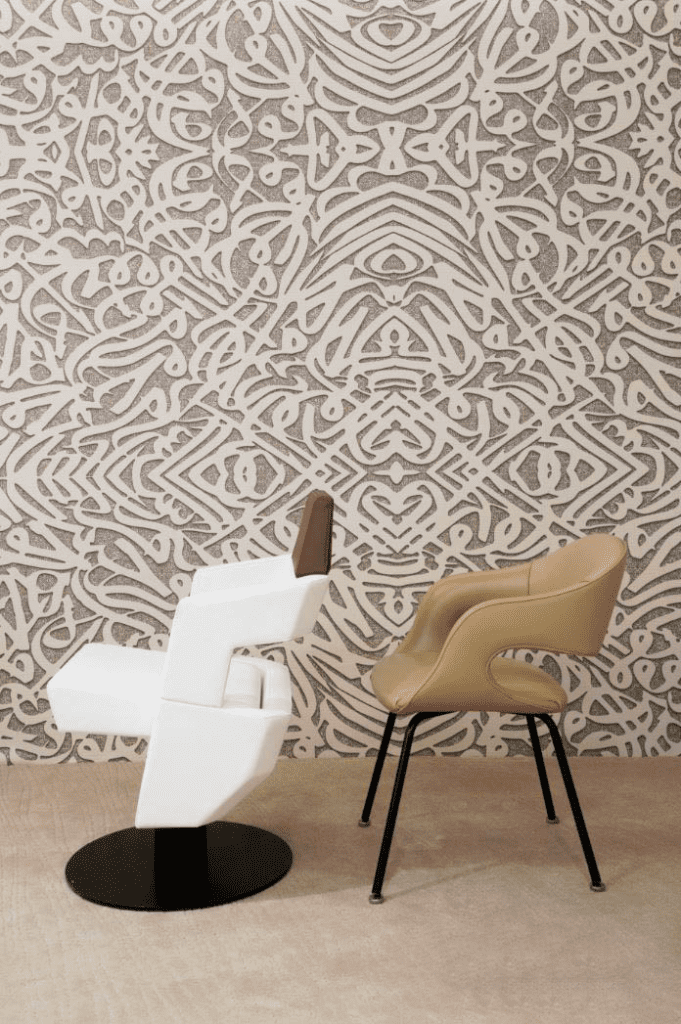 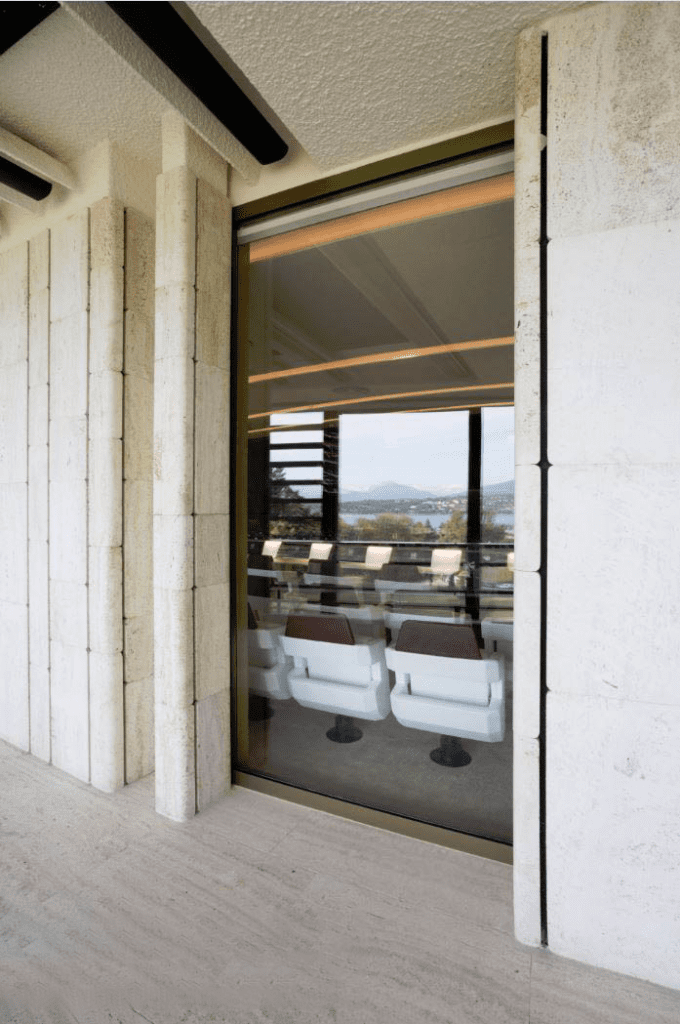