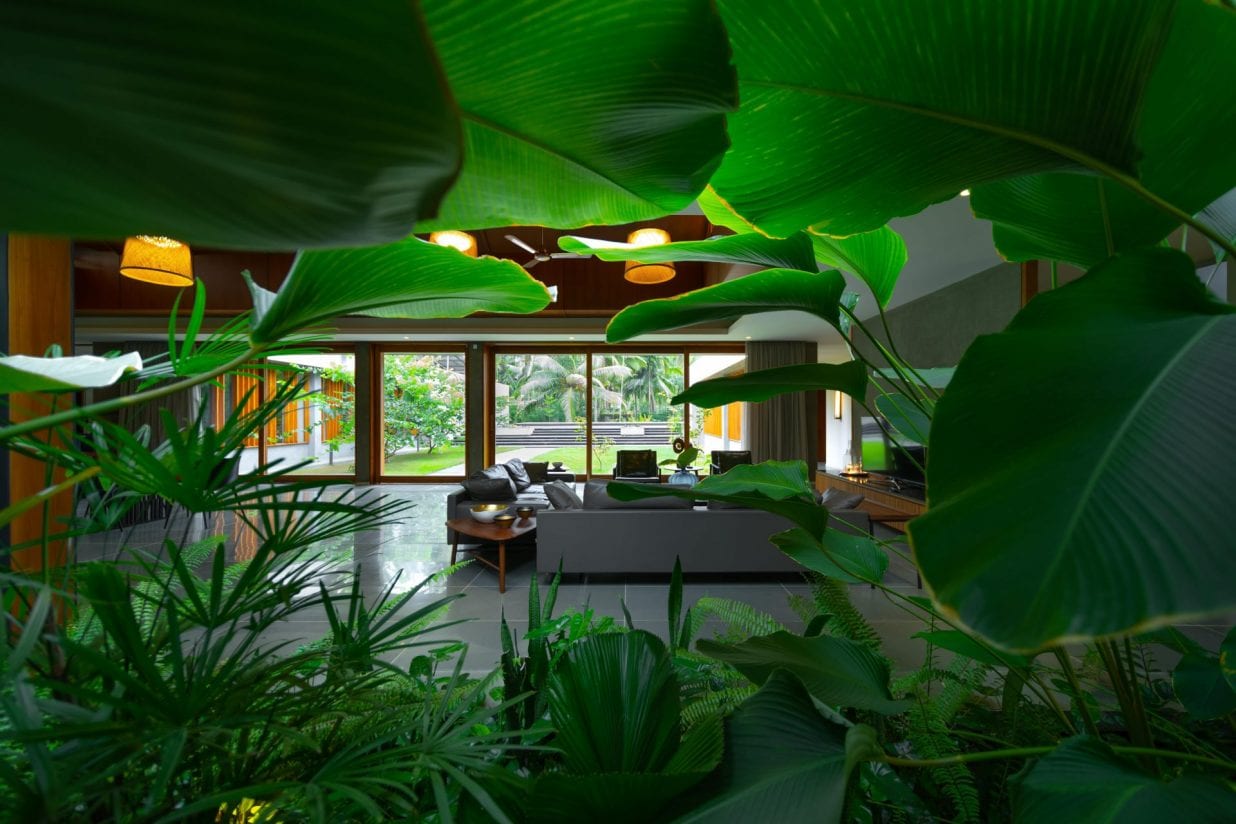 The House in a Garden

Thought Parallels Architecture delivers one of their most creative homes as they design the 10,000 sq. ft. family home of the Ayanis, located in the verdant surroundings of Payyoli, Kerala. 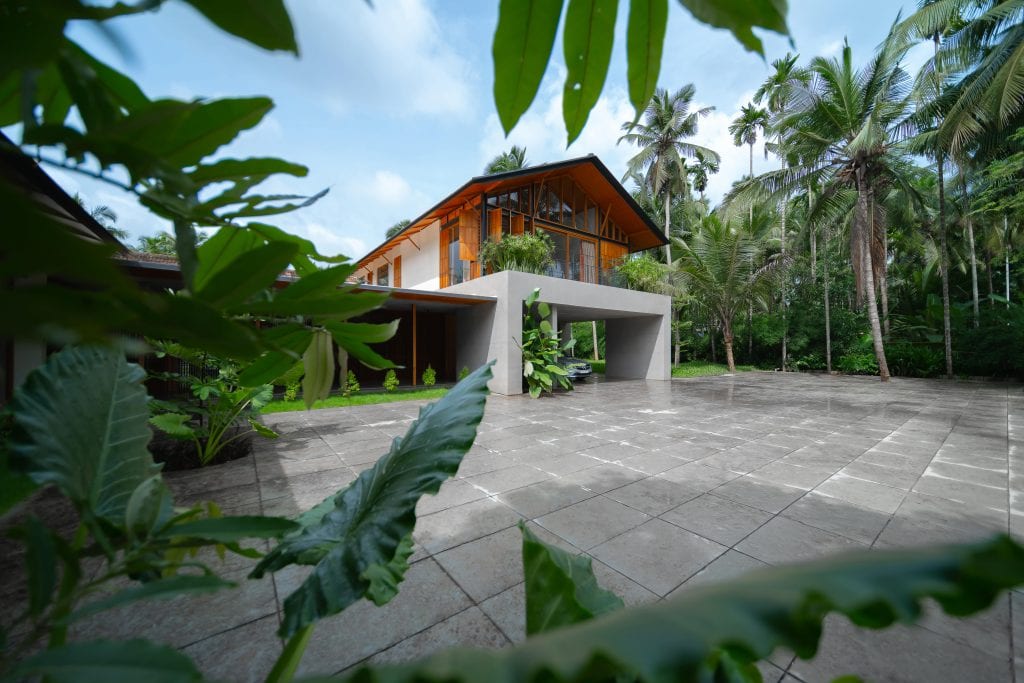 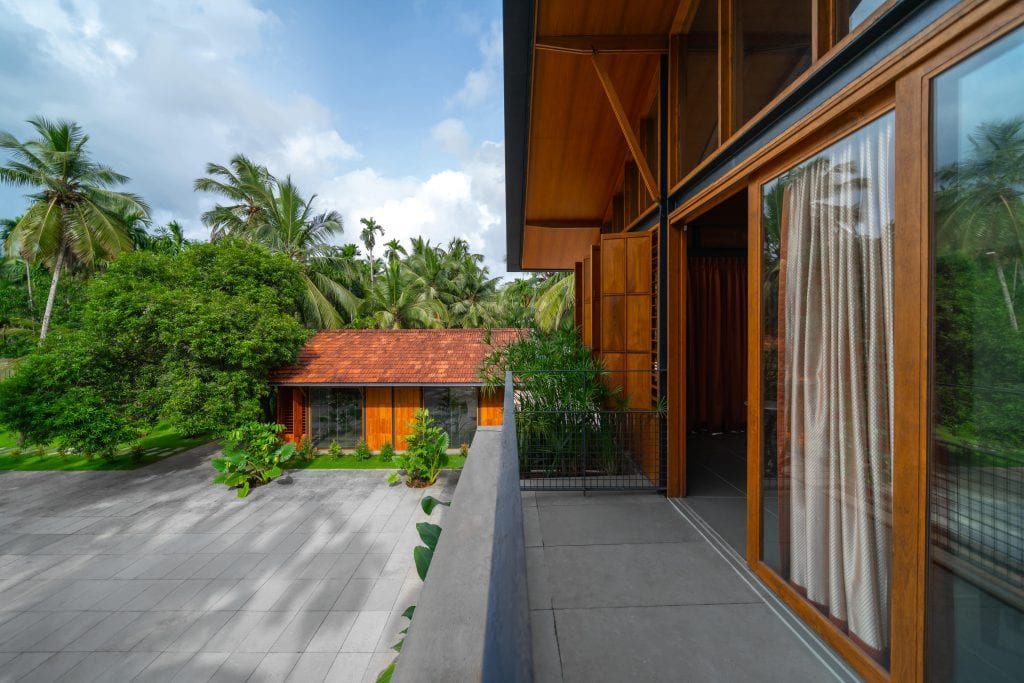 The Ayanis who had recently decided to branch off from the city to their native village to live close to family and relatives believed that this home would be a part of their extended family environment. The family desired a house that could read the surrounding landscape and acknowledge the splendor of the essence of nature. Their brief for the house was simple, “We want to nurture a family here. The kids should be able to play and the house should welcome the company.” 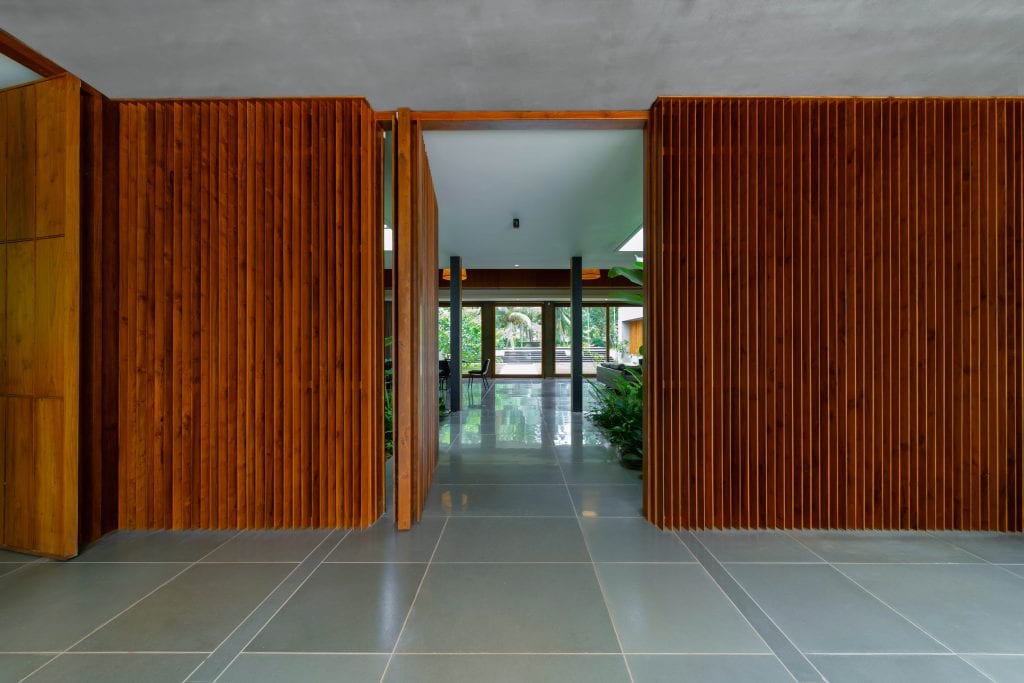 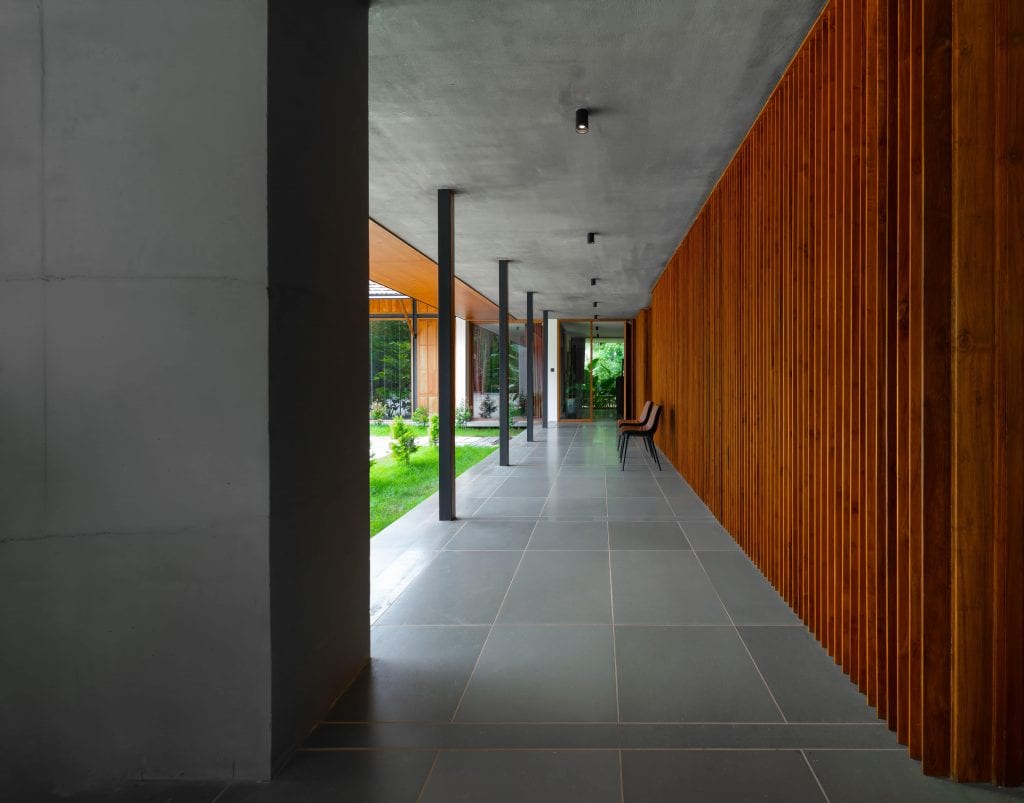 Intended to feature biophilic design, the house’s distinctive form echoes the traditional Malabar style architecture and is partly inspired by the ‘tharavadu’ (traditional houses) of Kerala, a repository of the Indian culture. Westerly breezes are directed over the facade, creating a calm, protected zone on its leeward-side. The house’s primary form is created by a series of mild-steel frames in a bold expression that reveals its structure. 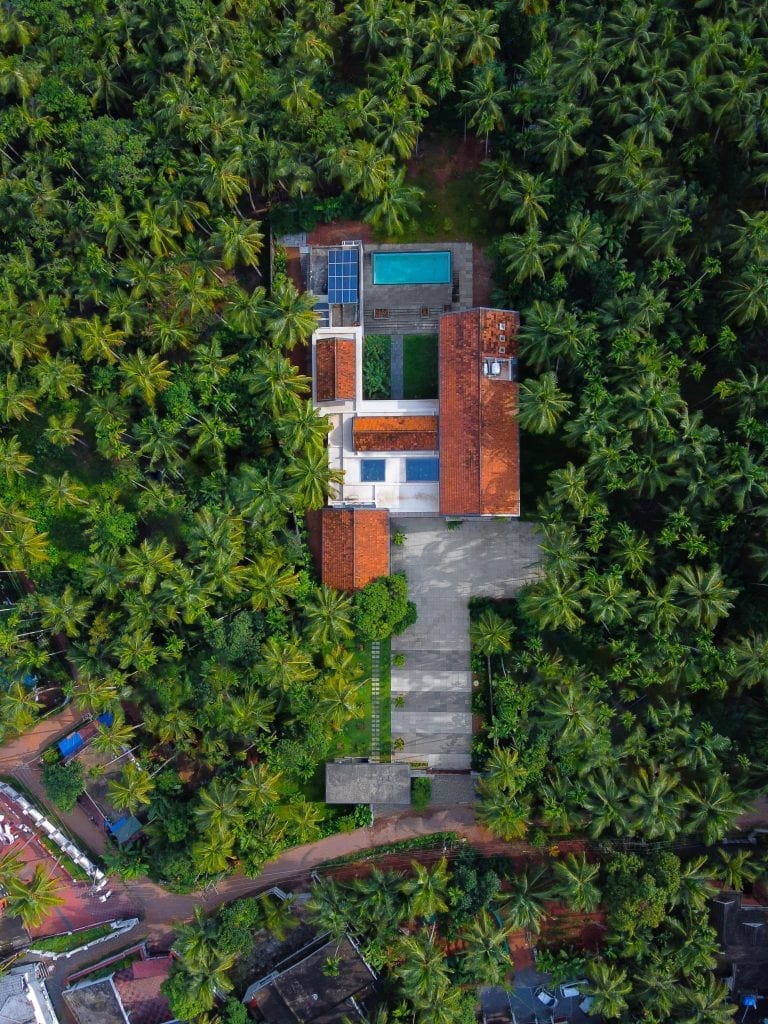 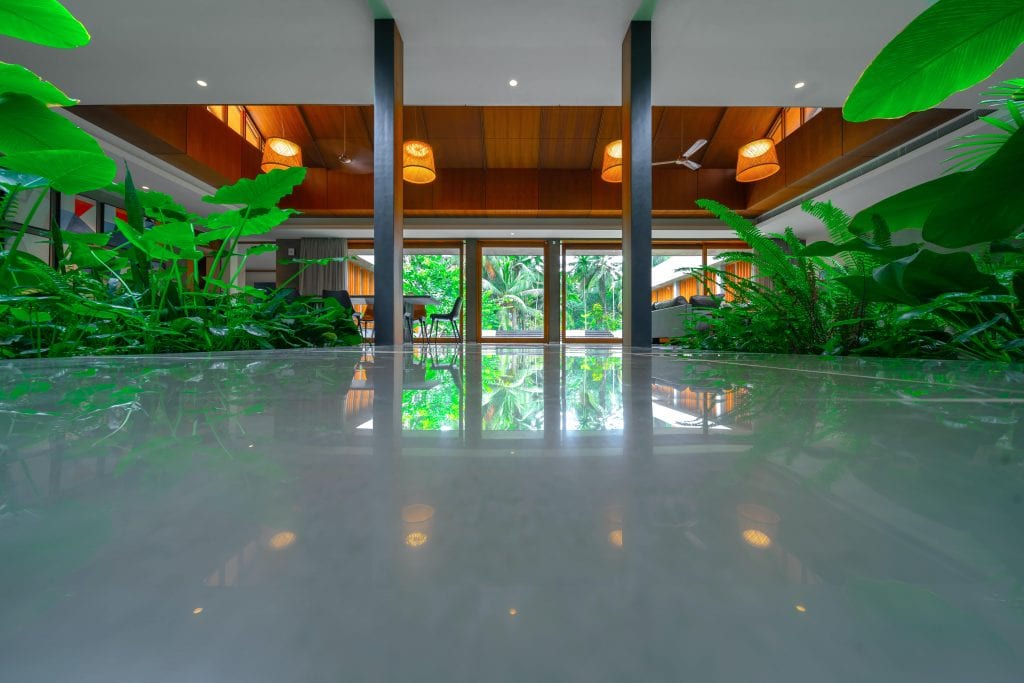 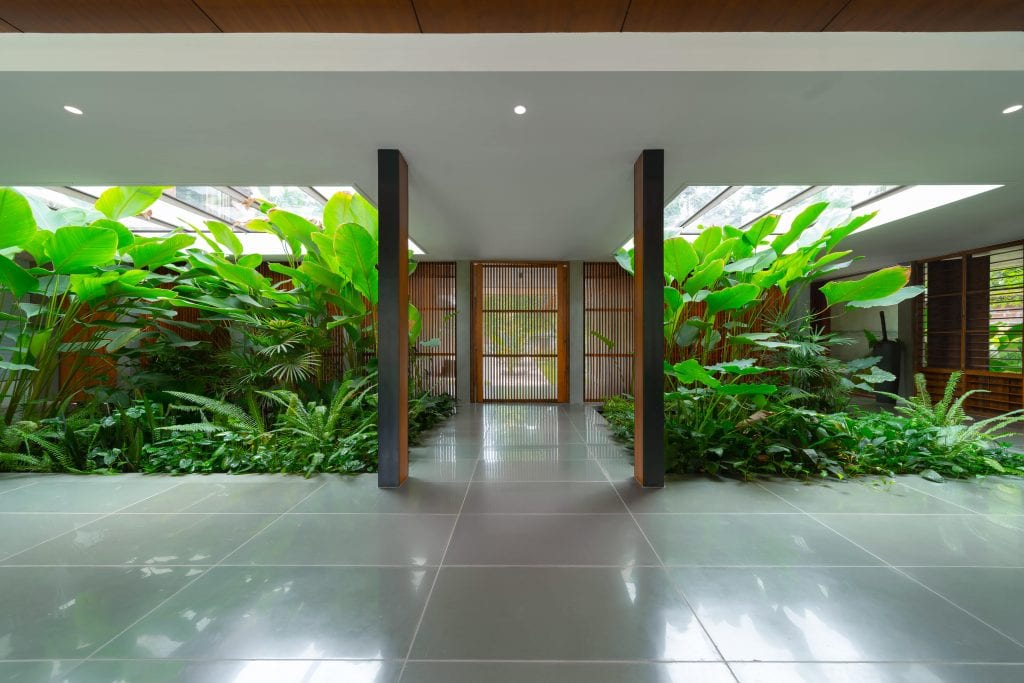 From outside, the house has a peaceful quality; simple white walls with effortless openings. Though deceivingly modest from the street view, the inside is colossal as a result of the way the design builds into the lush green landscape. The appearance of the house is adorned by details such as courtyards, the segregation of the social and private spaces, and the volumetric play of the interior ceilings. This gives integrity and individuality to each space. 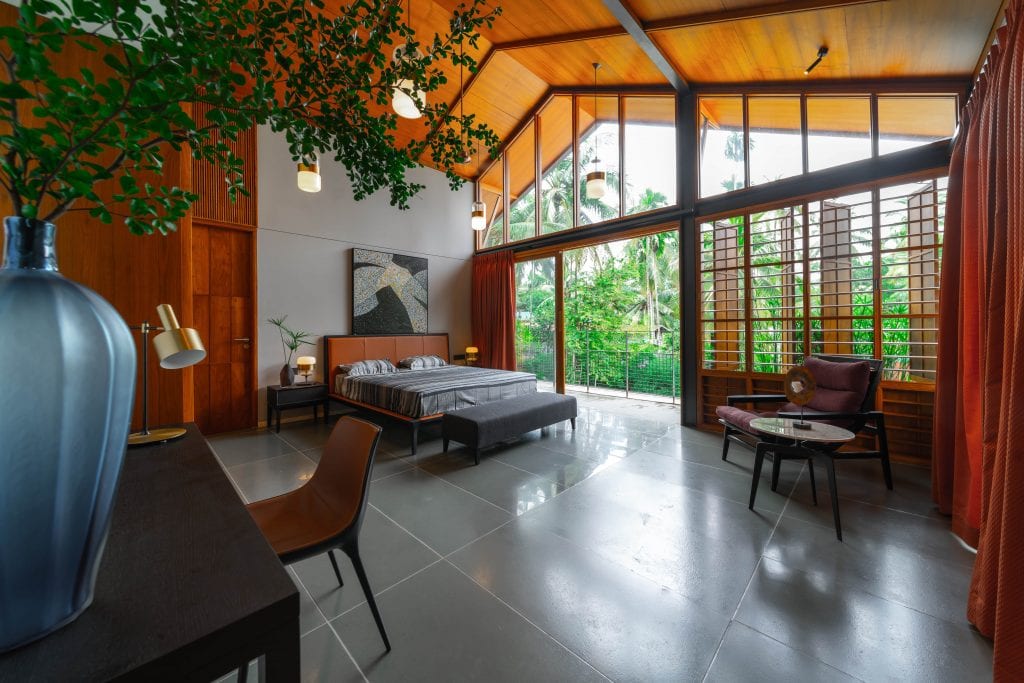 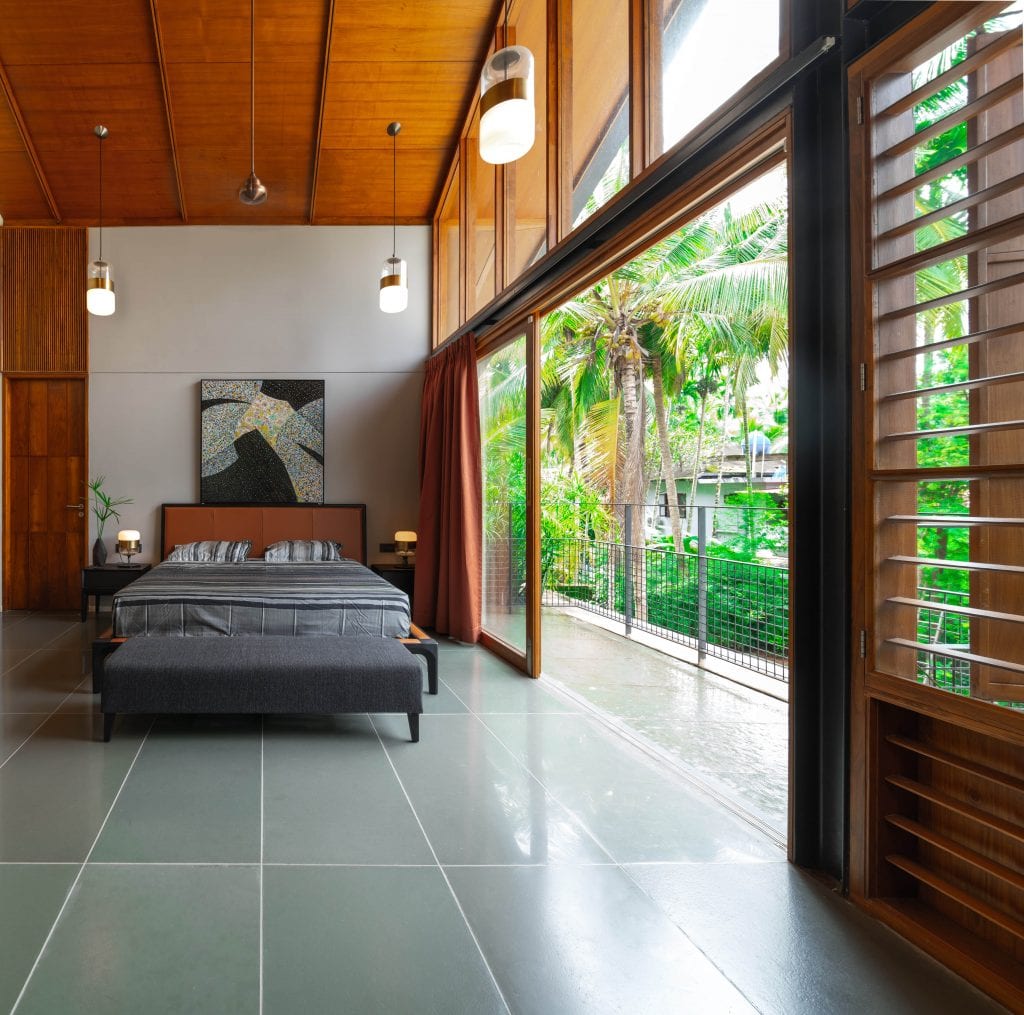 “The programmatic allocation is simple, it consists of five bedrooms, a kitchen, a formal living-dining space, a family living-dining space, and covered parking. All this is unified in a single volume with two courtyards that mark the difference between its social and private spaces, which are distributed through a central corridor. Each introverted space is visually connected to the opulent exteriors, an approach to benefit health and well-being,” details Nikhil. 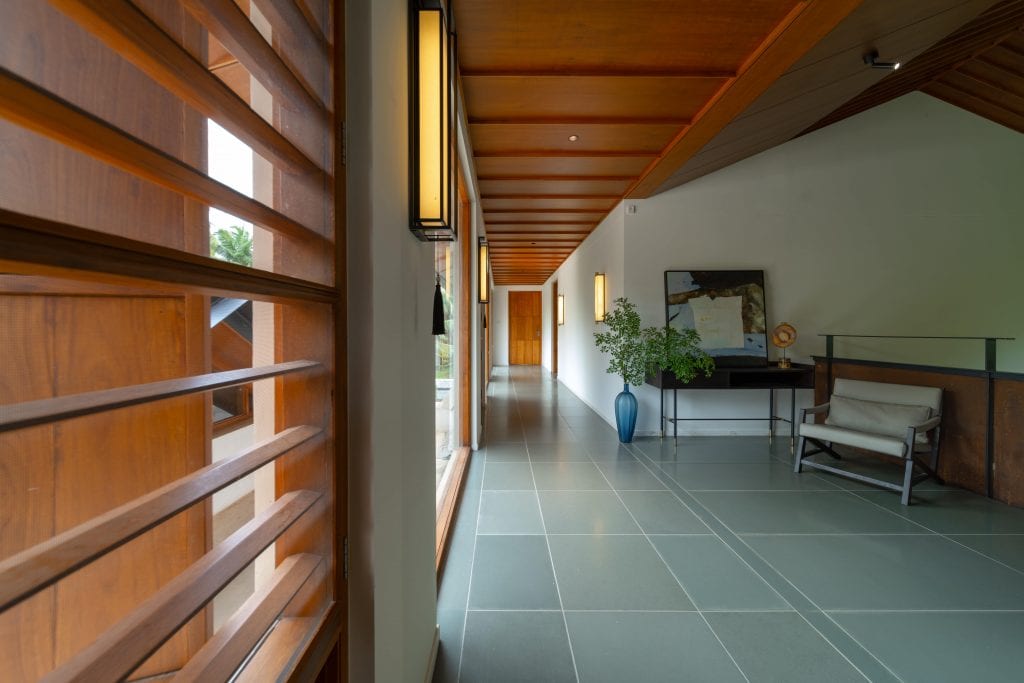 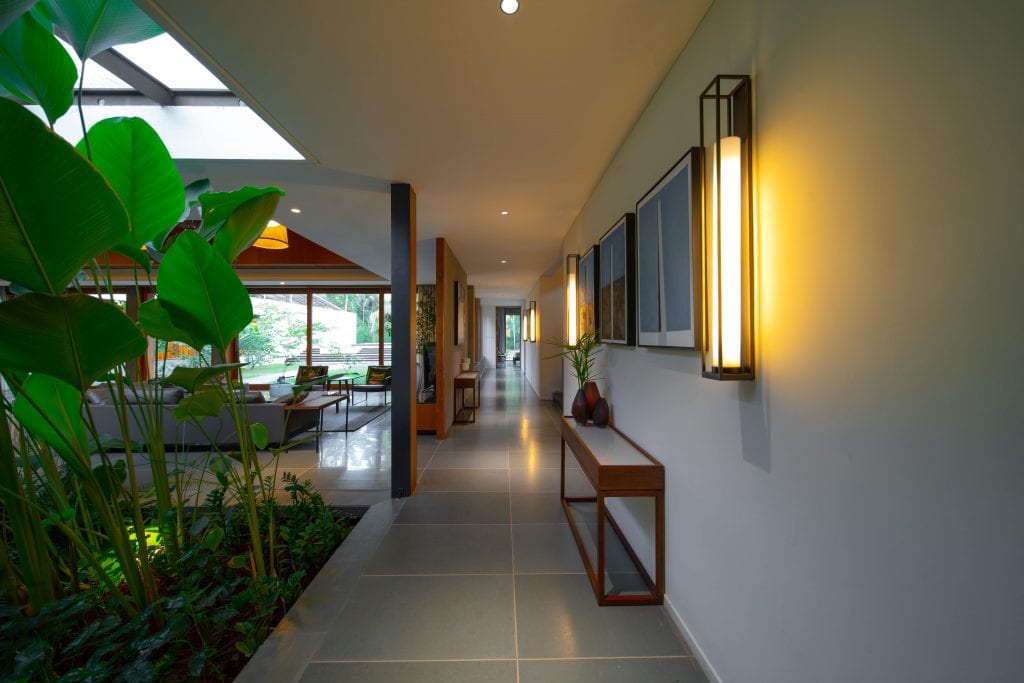 The Ayaniswere is particular about the division of social and family spaces. To cater to this need, the social space has been positioned away from the family area. Upon entering the house, the main corridor provides an immediate view through to the two smaller courtyards. Hardwood screens have been installed to visually connect the indoors with the outdoors. Further, the design solution focused on the interaction of the family living-dining area with the large courtyard. The limits between interior and exterior spaces are diluted with a large dose of greenery distributed liberally around the house. 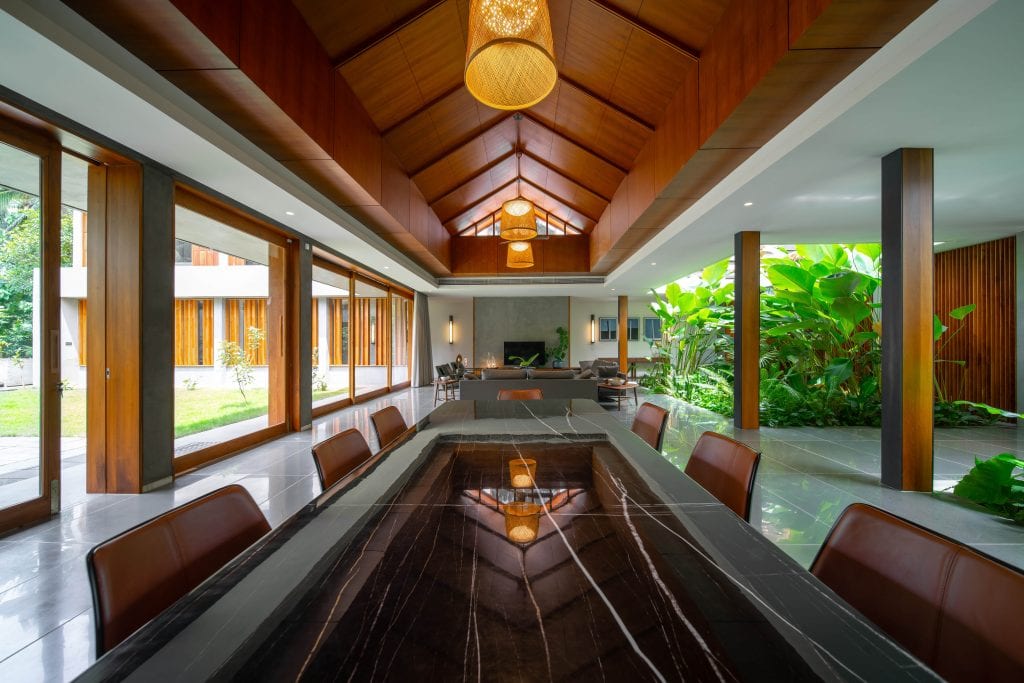 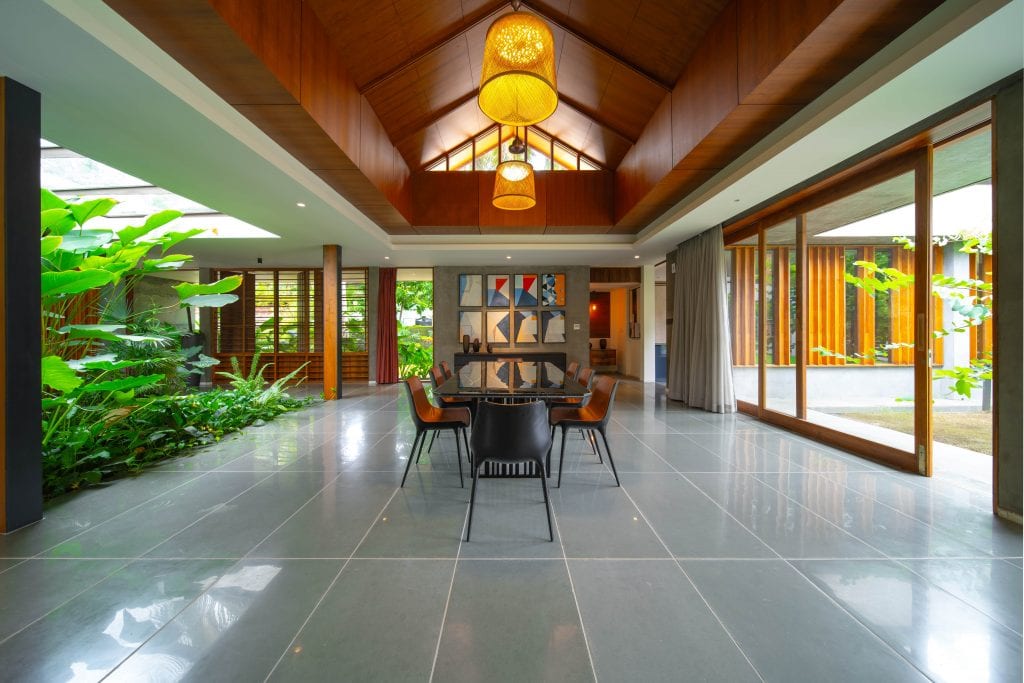 In terms of materiality, the house exhibits elements that integrate it into the imagery of the location, recalling the traditional houses with variables that provide a modern touch without radically breaking the aesthetics sought by the client. 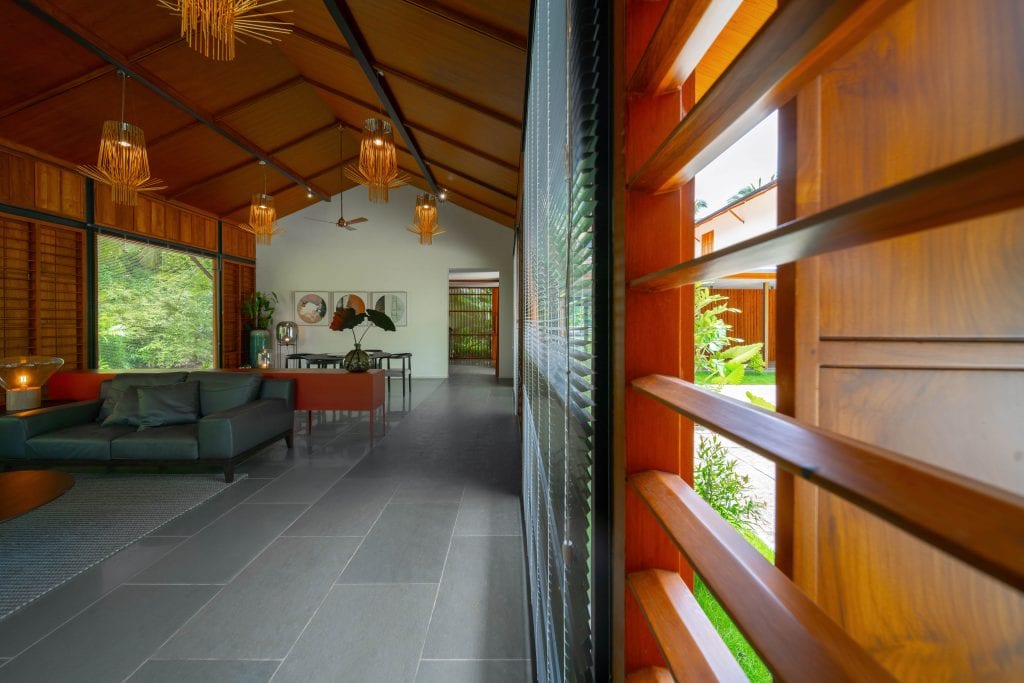 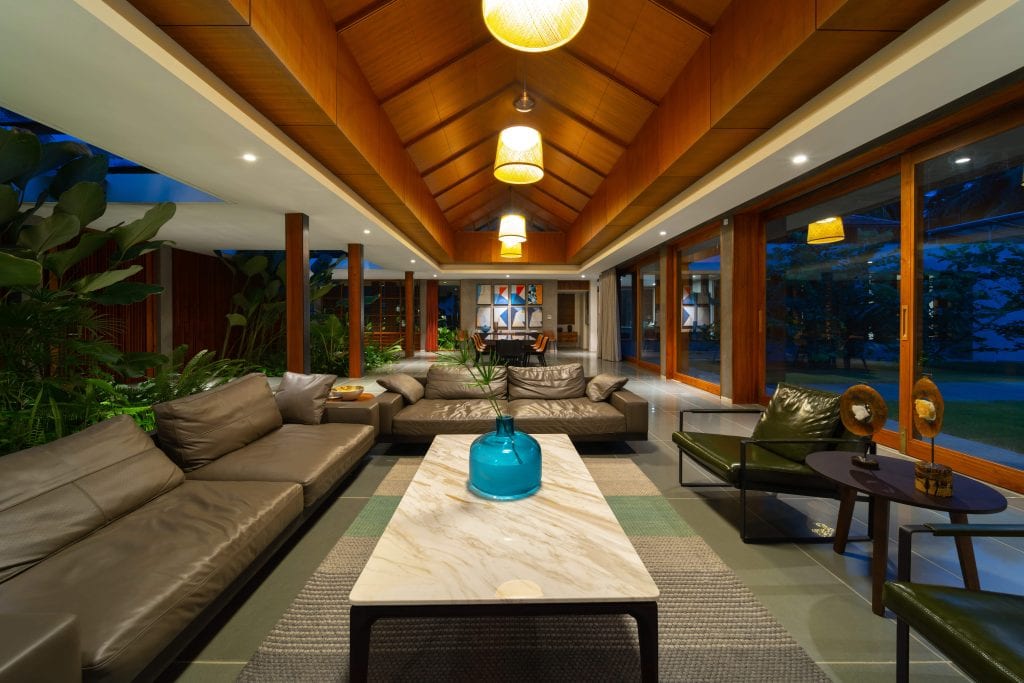 The overlay of Indian Teak Wood in contrast with Kotah Stone creates a juxtaposition of subtle textures from the ceiling to the walls and floor, visually softening the project as a minimalist residential space. This along with a seemingly delicate steel structure connects with the coastal environment to create a calm and concordant composition. 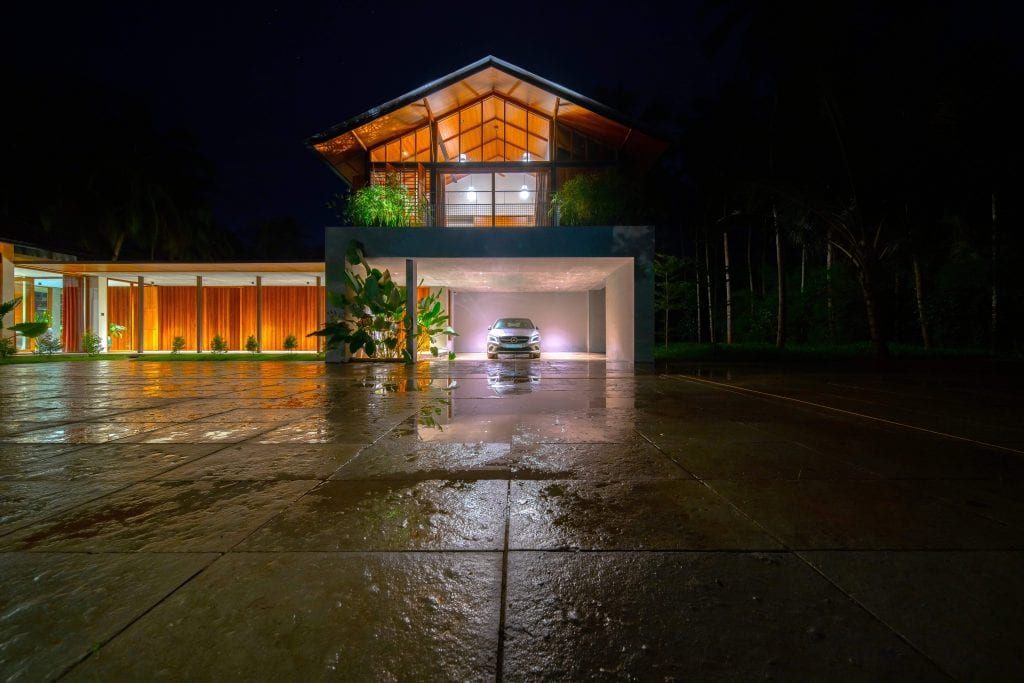 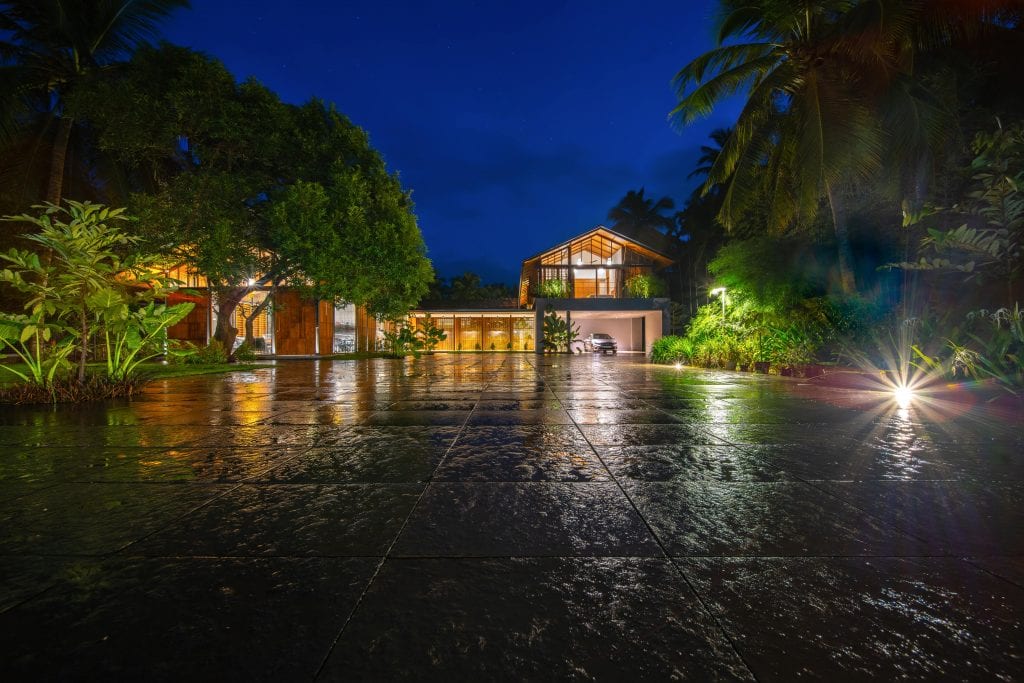 The residence also includes a variety of renewable energy techniques to curb energy consumption. A solar panel system takes care of electricity while the landscape design preserves existing native species, aiding both the reduction of water use for irrigation and lowering temperatures with the surrounding vegetation. The ultimate goal is to create luminous living spaces with natural ventilation while simultaneously exploring the possibility of using renewable energy.

RELATED  Terrace with a View 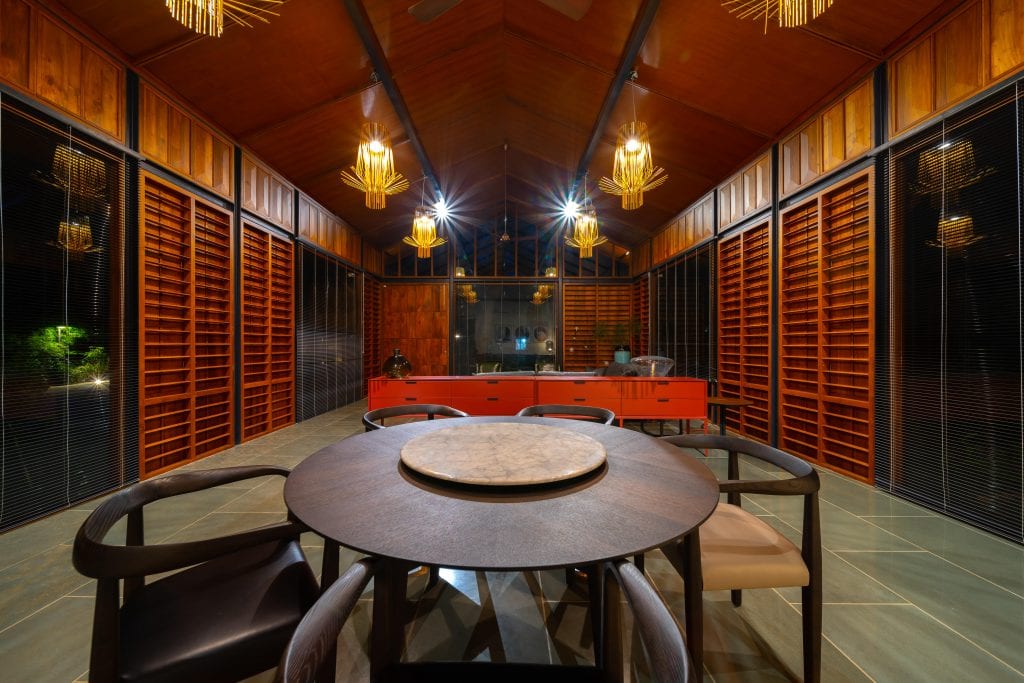 An aspiration to achieve enduring spaces. 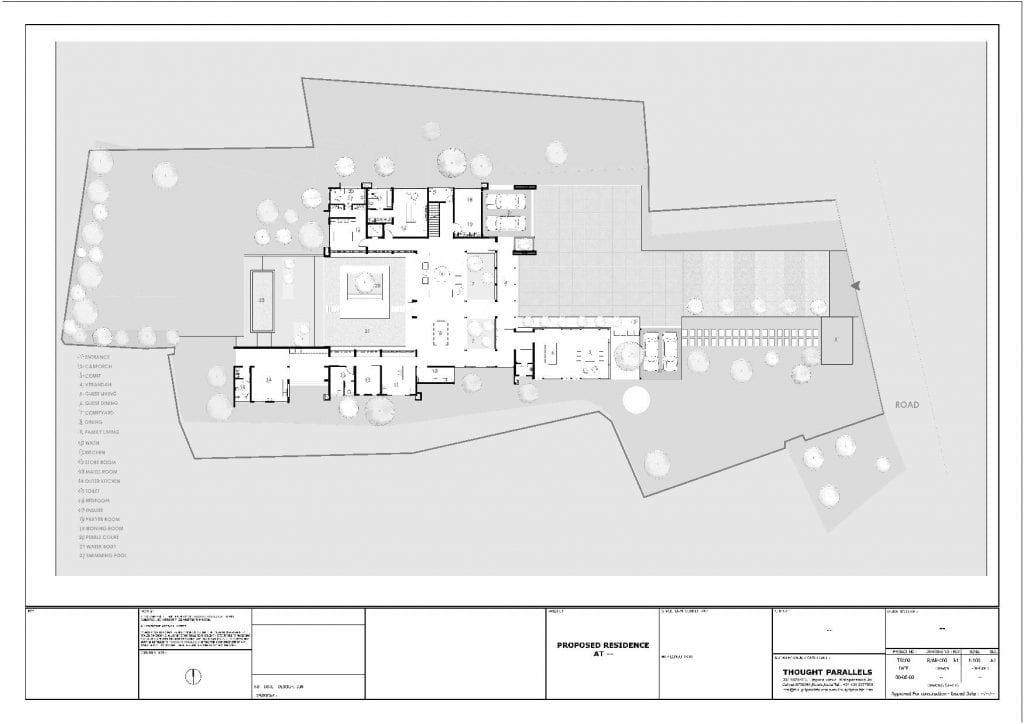 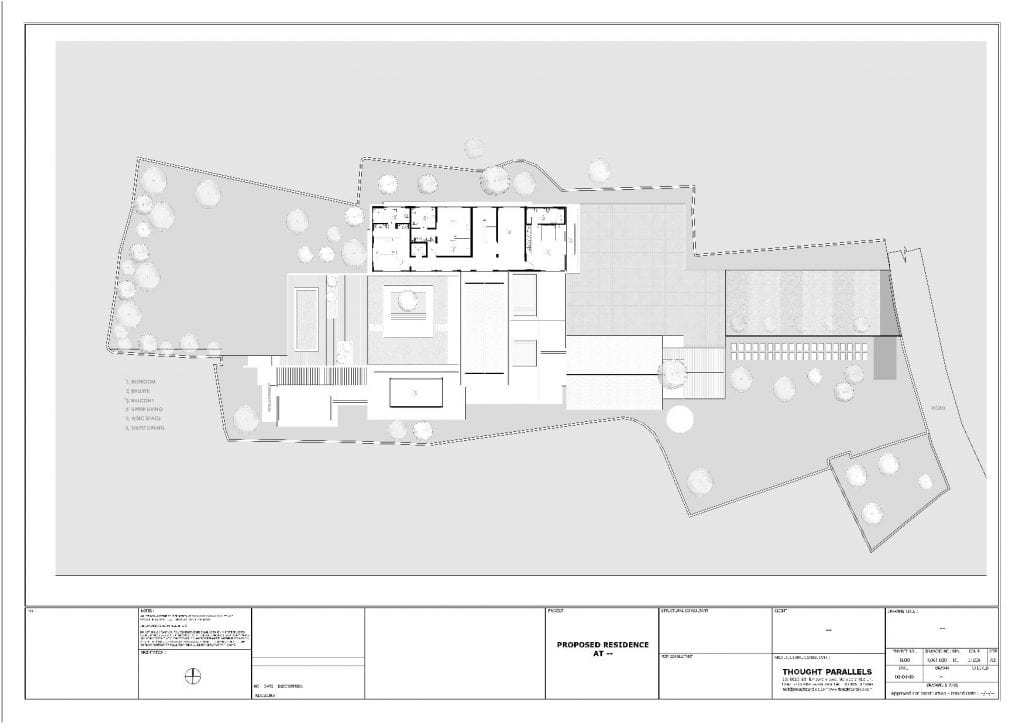