The House That Moves

Robert Konieczny is a Polish Architect, founder of KWK Prome, who many aspiring architects want to emulate, given the far from typical solutions that he finds for ordinary design problems. SCALE looks into their recent project, the Quadrant House. 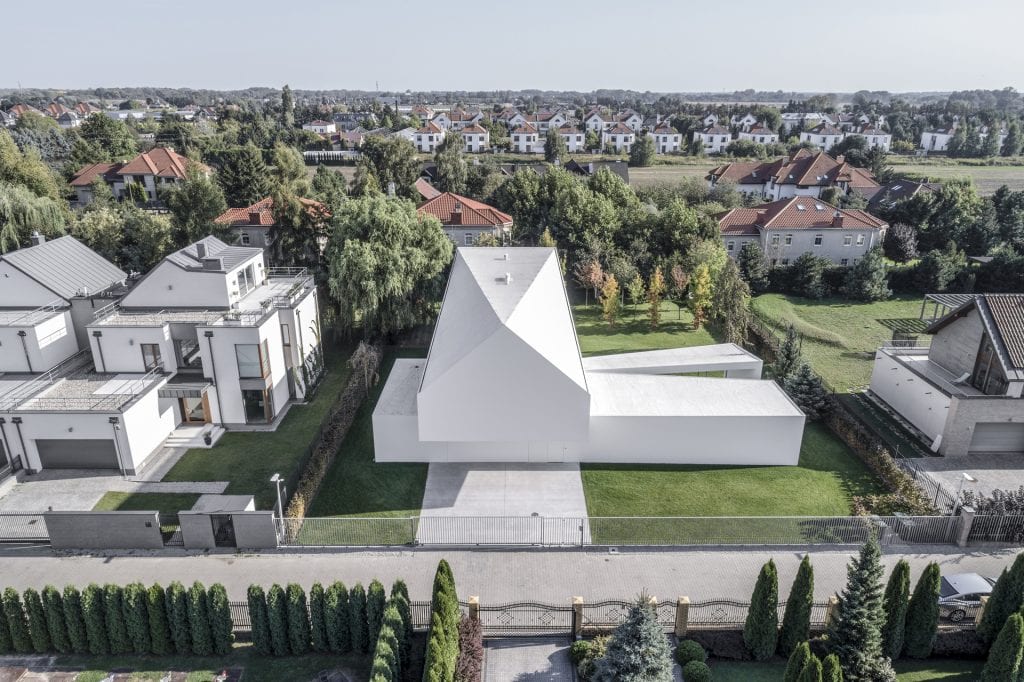 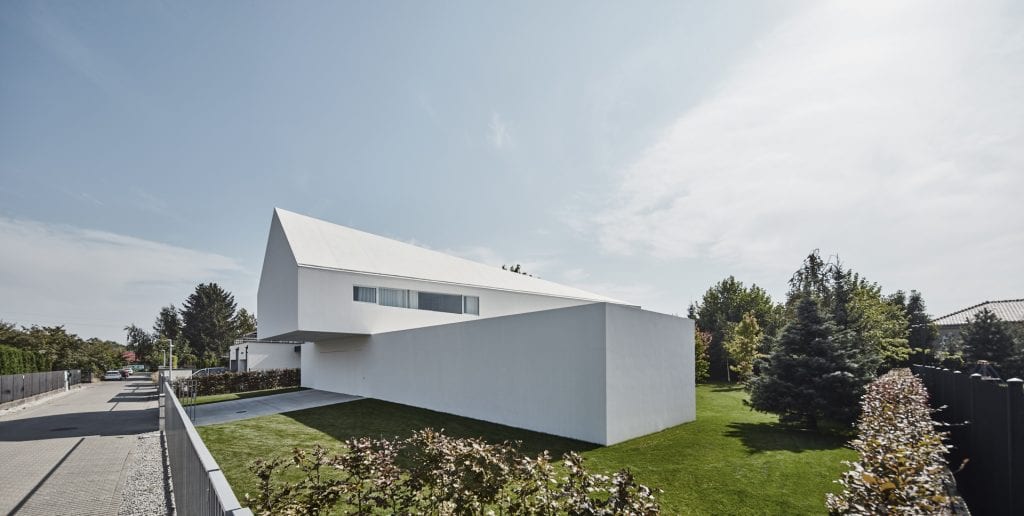 Robert Konieczny’s designs are always unique and unusual but never can they be accused of being contradictory to the client’s need, nor can they be found lacking in clarity and logical composition. 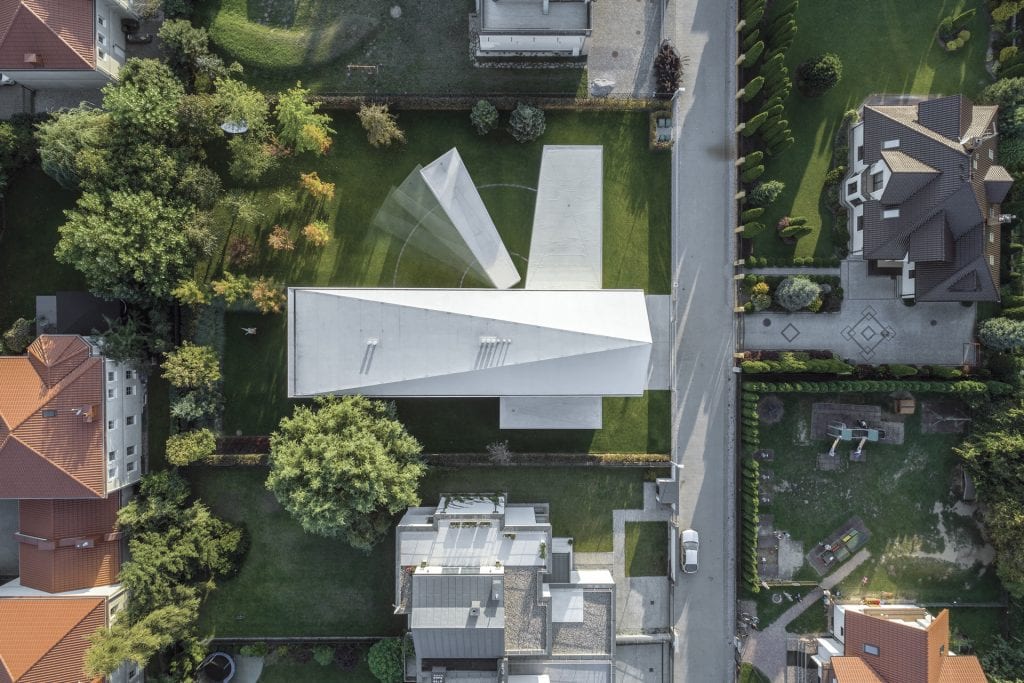 Typical is not a word that you would use to describe the firm’s design solutions and according to Robert Konieczny, as he was quoted in Culture magazine, “Things that are typical aren’t very good. It’s almost as if there was only one shoe size available: it would fit some people, but not most people. It’s the same with typical architecture‘.”

The solution to this clients’ needs was also found in a similar, simple, yet untypical method.

“Investors wanted a simple, sunny and relaxing home, somehow reacting to the movement of the sun. They also valued our moving buildings and their changeability,” explains Robert.

The starting point was a regular shaped unbuilt site, located in the suburbs among the average single-family housing. 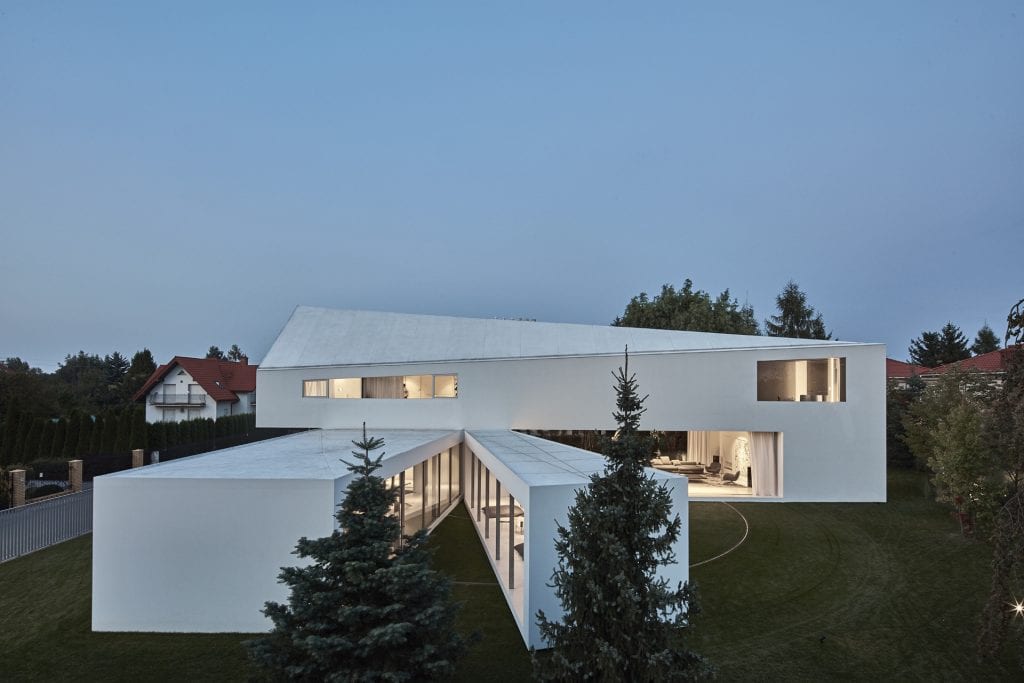 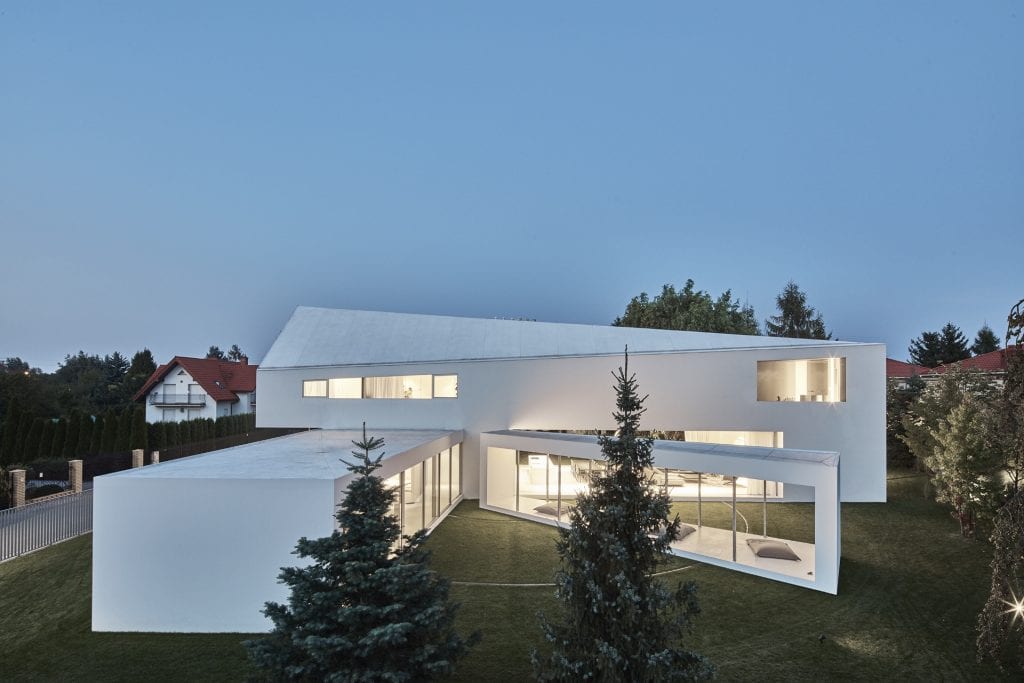 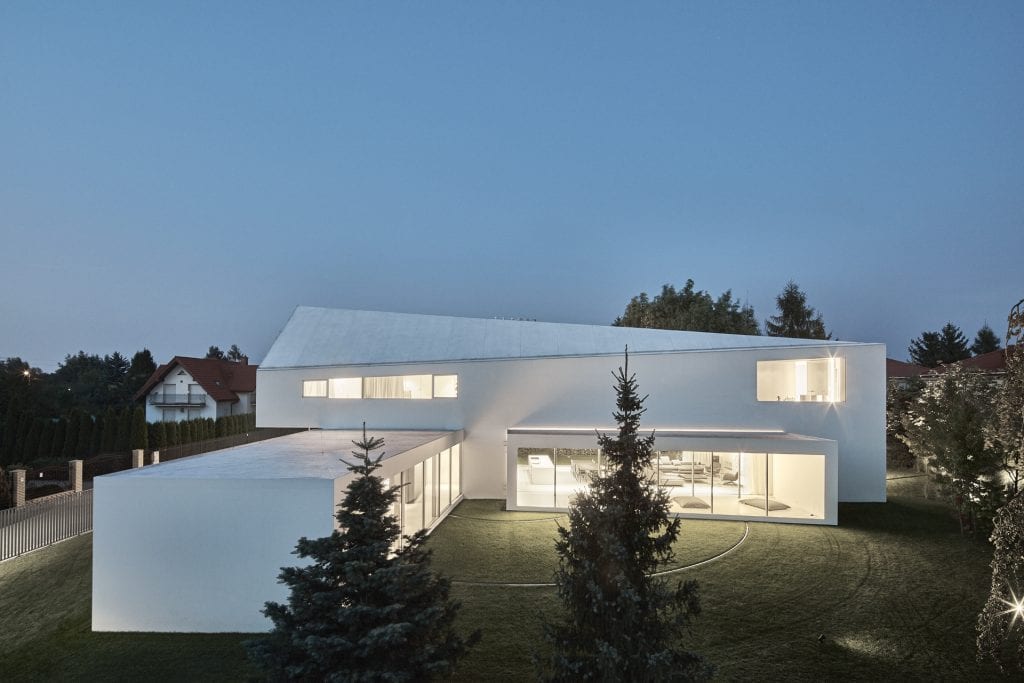 “We placed a rectangular solid on it, and then turned the part belonging to the ground floor to get as much privacy as possible from the side of the road. In the ‘cut’ space was located a living room, roofed floor and in the perpendicular shape we located the SPA zone. Both spaces close the private part of the garden. The investors’ wish was a simple house with a flat roof, but the local rules imposed sloping roofs. Therefore, from the street side, the house has a gable roof, and from the garden side a flat roof, which ultimately created a non-standard, characteristic house shape,” he explains how everyone was satisfied with this design solution.

“Investors wanted a house reacting to the sun, which is why we used the motif of the quadrant – an old device used to determine the position of the stars. We have designed a terrace that reacts to the sun and follows it, thus residents sit in its shade and pleasant airing and – depending on the season – it regulates the amount of sunlight in the spaces it adjoins – gives the desired shadow in the summer and in winter allows for more sunlight inside. Furthermore, in good weather and also in the evening, when the house is open, it can be an extension of the daytime area or SPA,” says Robert Konieczny.

The drive system is fully automated, but manual control is also possible, depending on the needs. Movement of the terrace has been programmed to be in constant motion during the day, so that natural grass grows underneath.

The construction of the walls and ceilings was made in monolithic technology, additionally, the roof truss was built in wooden construction. As a wall finish, Sto plaster was used – the Milano acrylic filler in white and the roof cover is a white TPO Firestone membrane. The white colour also dominates in the interior white epoxy resin was used on the floors.

“While working on the detailed design, we have established cooperation with Skyframe, specialising in frameless sliding window systems. At that time, Skyframe did not have such a wide glazing set – the living room had two sets consisting of six sliding windows that parked in the wall niches and allow the living room to be opened completely from two sides. However, they liked our project very much and treated it as a design challenge. After six months, they created a completely new prototype motorised sliding system, which they personally commissioned and programmed on site,” explains the firm. 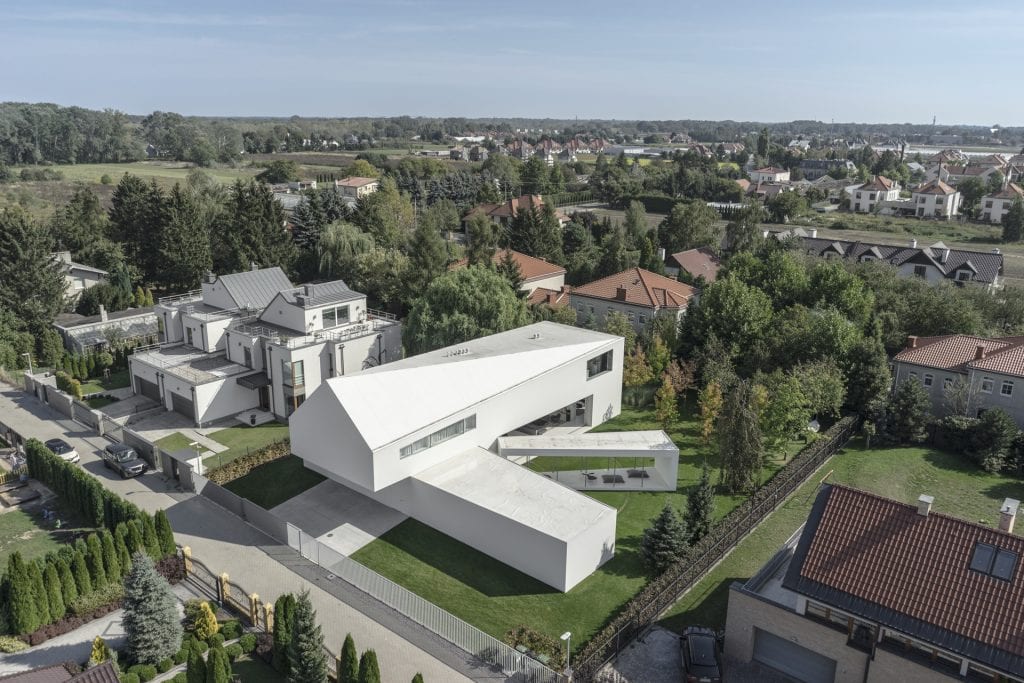 Mechanisms by which the terrace of the building moves were designed and made by Comstal. This company collaborated with KWK in the construction of the safe House, Konieczny‘s Ark and National Museum in Szczecin Dialogue Centre, “Przelomy”, which were also equipped with various kind of a large-scale, moving elements. The movement of the terrace and its speed is adapted to the sun’s wandering. The drive system is fully automated and has advanced safety sensors. If it encounters an obstacle, the terrace stops, making it completely safe to use. However, for functional reasons, manual control is also possible. The terrace has been programmed to be in constant motion during the day, which makes natural grass grow underneath without any disturbance. 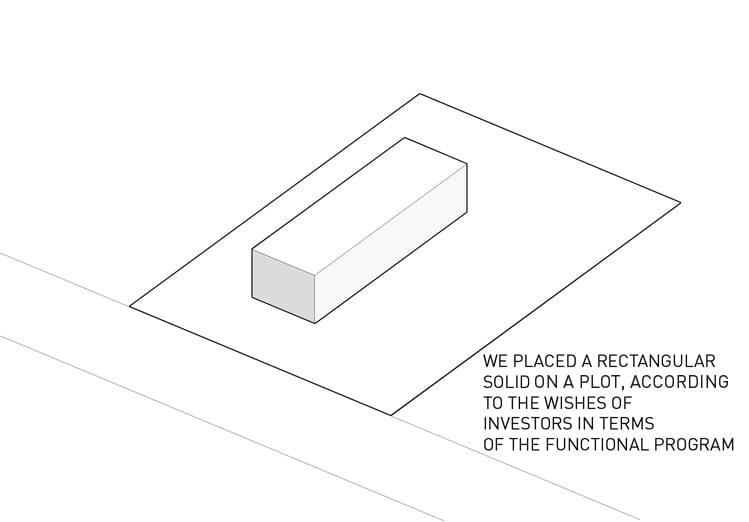 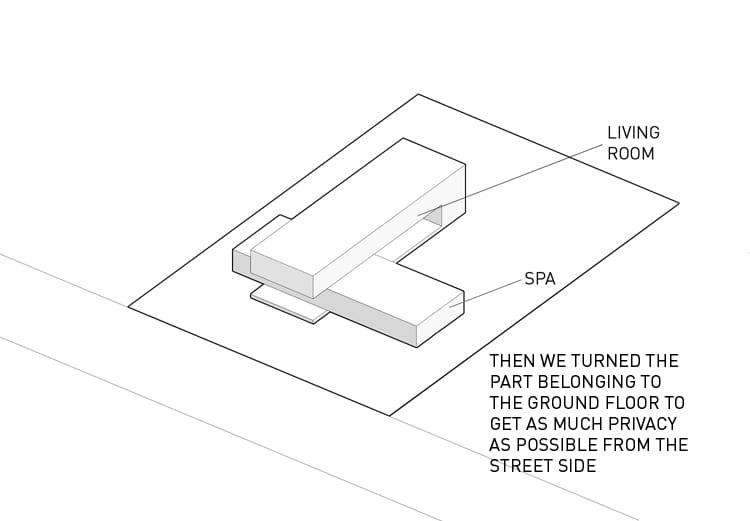 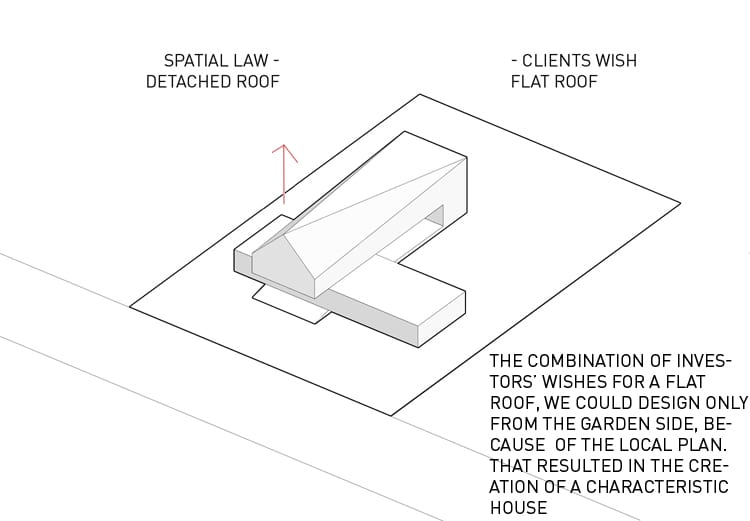 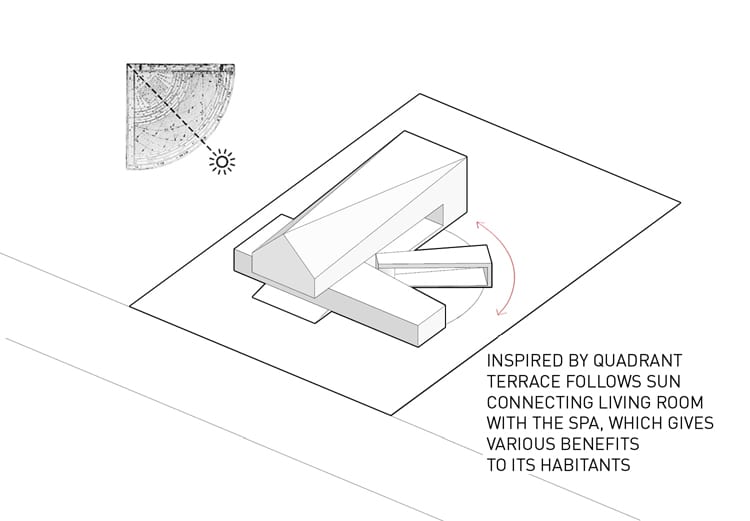 The firm KWK Promes was formed of a partnership between Robert Konieczny with Marlena Wolnik in 1999 and is more than an acronym of the founders’ initials. It is a reference to Silesia, which is where the architects come from and where they work. KWK stands for a coal mine, and Silesia is a coal-mining region.)

The firm since its start has been nominated for the Mies van der Rohe Award six times.