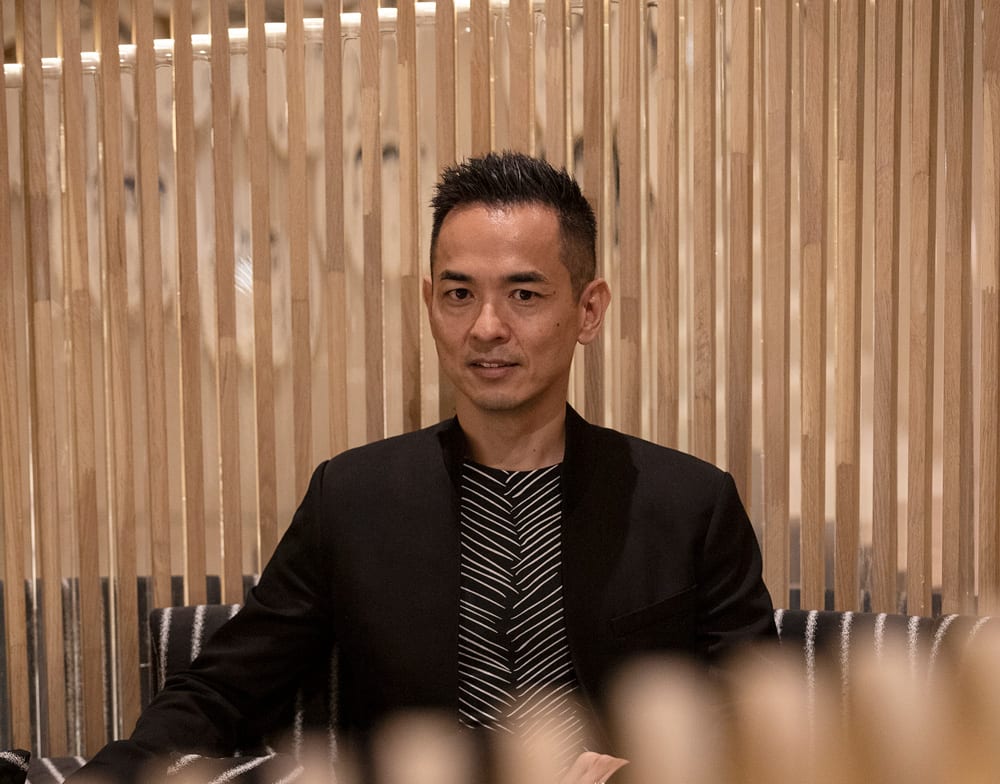 Koichi Takada touches on the Wabi-sabi aesthetics that is on play at the National Museum of Qatar as he takes us through his interior designs within the Museum. By Sindhu Nair

Koichi Takada stands apart, serene yet observant, in the mayhem that surrounds Jean Nouvel and his fan following at the opening of the National Museum of Qatar. His approach to design is similar to his character; in perfect sync with the surrounding, drawing inspiration from nature without disturbing the balance.

Takada reminisces about the buildings he was inspired by in Doha. 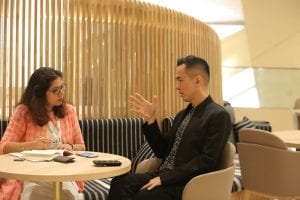 “The first time we went to the Museum of Islamic Arts to present our design, we were fascinated by the perfect geometric building. It was even a bit intimidating, as we did not expect this level of quality. Even from where we come, it is a difficult challenge to build a building like that. It is almost perfect geometry. A flawless building. A shrine of sorts,” he says.

“It is completely different here at the National Museum of Qatar. Everything is very organic, nothing is perfect, it is almost accidental, but on a very humane level. And we like this form of architecture too,” he says. “In Japanese, we have a word wabi-sabi which is a view centred on the acceptance of transience and imperfection. It is the aesthetics that is imperfect, impermanent, and incomplete. It is a concept derived from the Buddhist teachings. And we love to have designed within this aesthetics.”

Later sitting in his designed space within Café 875, Takada takes us through his designing process. Circular, cosy seating arrangement occupy the Café following the wooden slates theme that seems to mimic the roots of a tree.

“The landscape of the desert is very beautiful. Each of our designed spaces had specific inspirations from the cultural and natural heritage of the country,” says Takada. 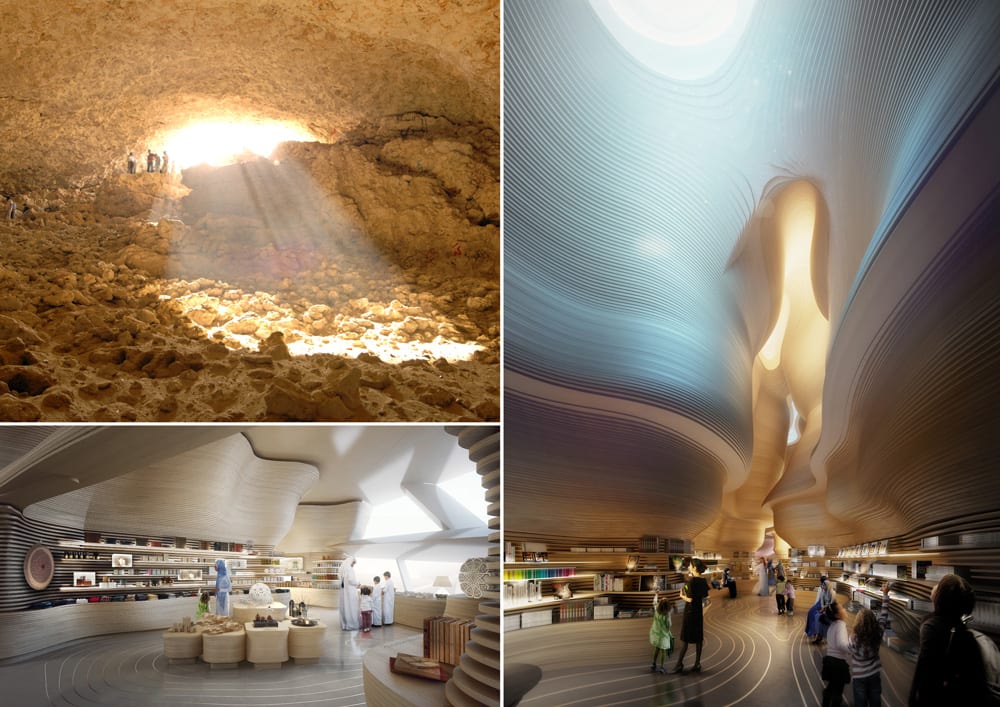 “Talking to H.E. Sheikha Al Mayassa and to the Qatar Museums Authority (QMA) opened my eyes to a culturally rich way of life, inspired me. They passionately talked about the iconic nature of Dahl Al Misfir (Cave of Light), located in the heart of Qatar, and introduced me to the ritual of majlis floor dining, a bit like my favourite childhood memory of Japanese tatami floor dining,” says Takada, “Designing the interiors of the National Museum of Qatar was an opportunity to create a unique experience for visitors to immerse in Qatar’s cultural heritage; the traditional and historical past, and it’s  development into a modern state as the cultural hub of the Middle East.” 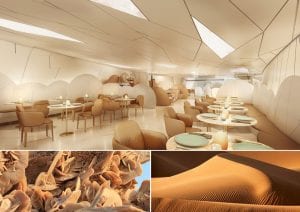 This design story began nine years ago for Koichi Takada and team when they won an international competition for the interiors of this Museum. Its equally interesting to know that the Jean Nouvel Atelier had also submitted their design for the interiors but it was Takada’s natural inspiration that won the competition.

“The initial sketches submitted for the competition and the actual space that we see are essentially the same, though we worked on it to improve the cultural as well as the historical context,” says Takada.

So how did the design process begin? Was innumerable desert visits and tours of the country needed to understand the history and the culture of the land?

“We researched a lot to arrive at this structure within the Museum, “says Takada, “I love nature, and we look at nature to inspire. I don’t like buildings. I don’t like cities, there is too much concrete, glass and steel.  Whenever we look for inspiration, we go back to nature, and bring it back within buildings and in this case, we bought nature into the Museum.” 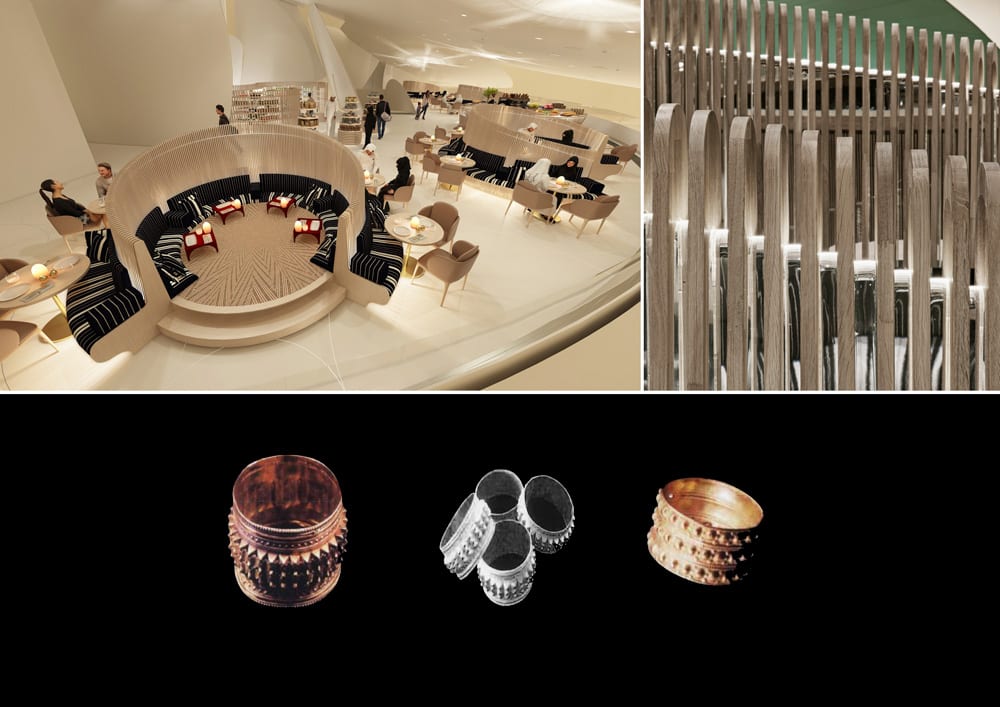 The Café inspired by Gold

The Café 875 was inspired by traditional Qatari gold jewellery, particularly the medallion rings. ‘875’ represents a grade of fineness or purity of gold. It is very rare to come across, and it is only available in the Arab world. 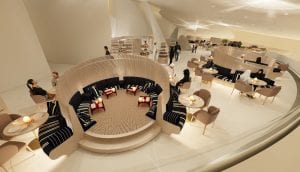 “The interior of the Café offers two out of four medallions for visitors to experience the unique Majilis, a traditional setting from the Qatari Bedouin nomadic lifestyle and enduring hospitality. The other two medallions accommodate visitors with more familiar contemporary café seating. The fabric takes on a circular pattern for the banquette seats and blends the traditional black and white stripes of the Al Sadu weaving heritage, gradually fading, symbolising the transition into a modern Qatar,” says Takada. 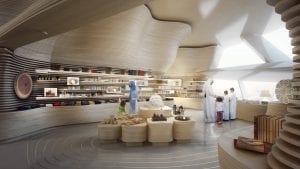 “The interiors of each seating Each of the detail within the Café is translated from the cultural heritage of the country and subtly transformed into a design feature. The embedded lighting within the sitting cocoons, mimics the jewels of the medallion.

“The medallions were designed with a special up-lighting effect that evokes the allure of 875 gold. Each medallion is designed to cast a ring of light onto the architectural ceiling and intended to attract visitors to come up to the mezzanine and discover the ‘invisible’ café,” he says.

But the design of the Café was to be executed with much thought, it had to be arresting while it could not take away the magnificence of the disks that form the roof and the covering of the building, the masterpiece of Nouvel.

It was designed to ‘hide’ from one’s sightline so that it does not physically overwhelm the arrival experience intended by Jean Nouvel. Not to be seen from the lobby, the wooden profiles of medallions are angled to follow the ceiling of architecturally impressive interlocking disks flying over the main lobby and the café. “While the Café is not visible, the rings on the roof are visible on the disc and hence it was an ephemeral effect,” he says. 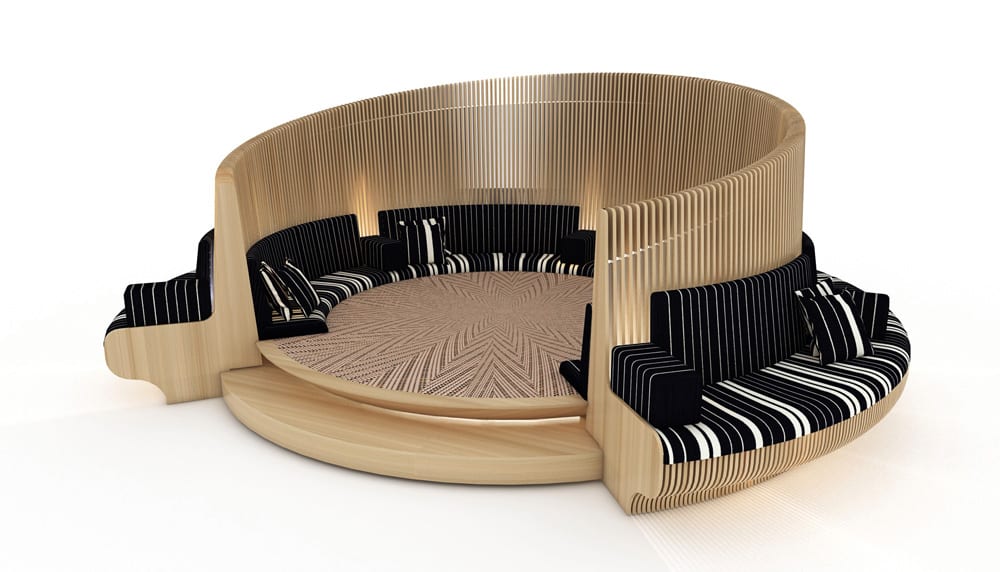 “The forms and materials used aim to respect and complement Jean Nouvel’s architecture. The desert rose itself is an inspiration from nature,” he says.

But how big a challenge was it to work with the architect who had a very distinctive idea of how his building should be, within his designed form?

“I respect Jean Nouvel, and I have worked with him before. We had discussions that helped us reach the final product. In many instances we agreed on the path to be taken while in some portions we agreed to disagree,” Takada puts it mildly, “It was all part of the discussion and learning process to arrive at the best design for the particular space.” 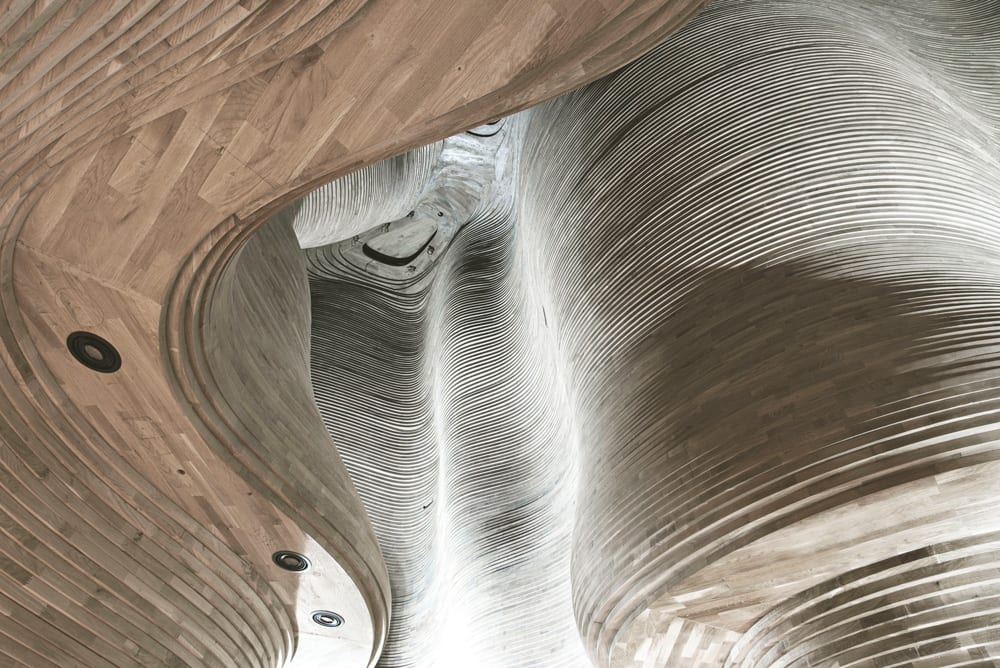 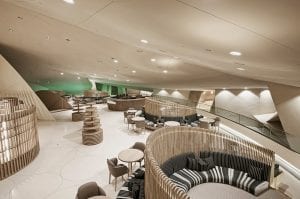 Nature and The Museum Shops

The inspiration of the setting of these shops came from the Dahl Al Misfir (Cave of Light), located in the heart of Qatar, a beautiful underground sanctuary formed largely from fibrous gypsum crystals that give off a faint, moon-like, phosphorescent glow. 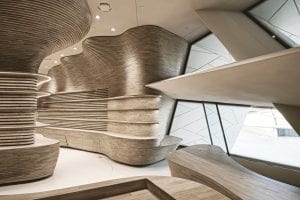 The timber walls of the museum shops were inspired by this cave. Its organic architecture echoes Takada’s vision of bringing nature back into architecture, establishing relationships that connect people and nature through design. Using a cutting-edge 3D modelling software, Koichi Takada Architects achieved a design of curves and surfaces that words fail to describe.

The beautiful wooden pieces arranged from the floor to the roof of the space seem like a puzzle that fits seamlessly.

“Imagine putting together the 40,000 wooden pieces of a three-dimensional puzzle? Each wooden piece, CNC-cut in Italy, is entirely unique so it could only fit with its exact complementary piece. They were assembled by hand in Doha by Italian master carpenter, Claudio Devoto and his team of artisans,” reads the information text from the Architects. 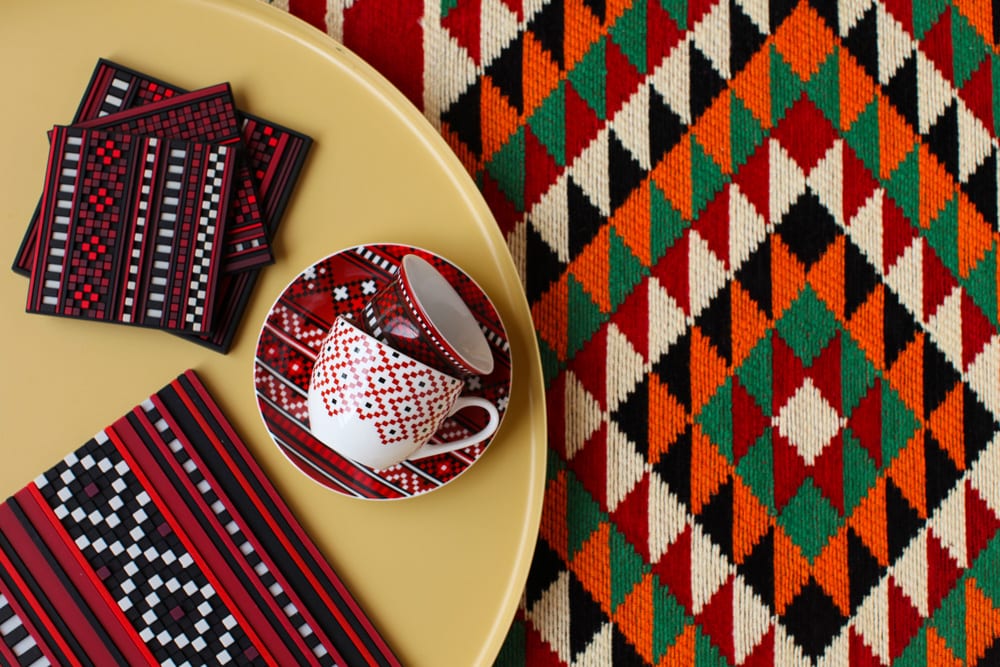 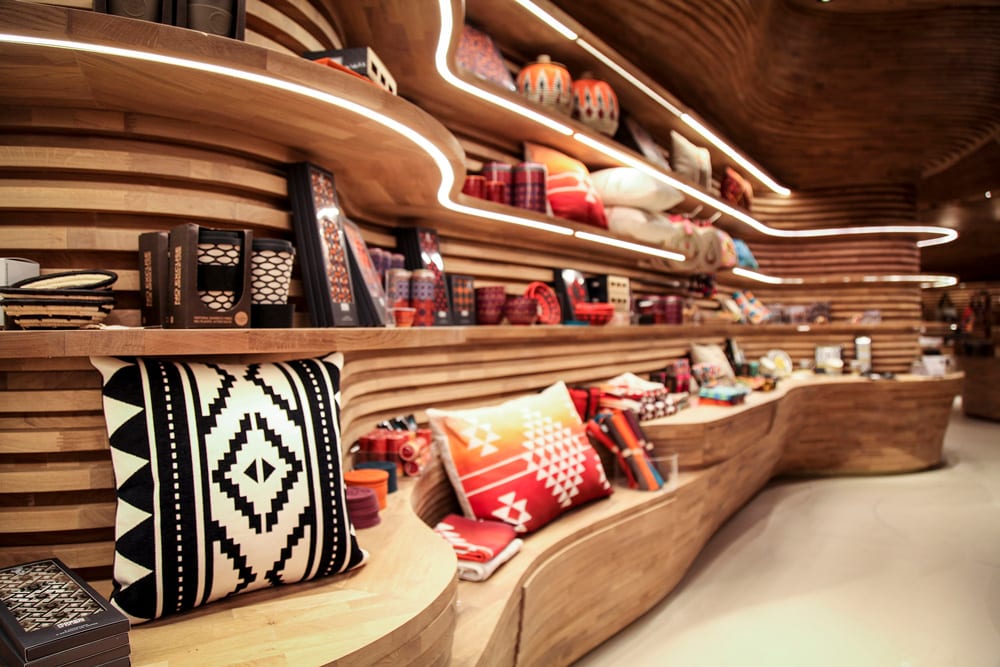 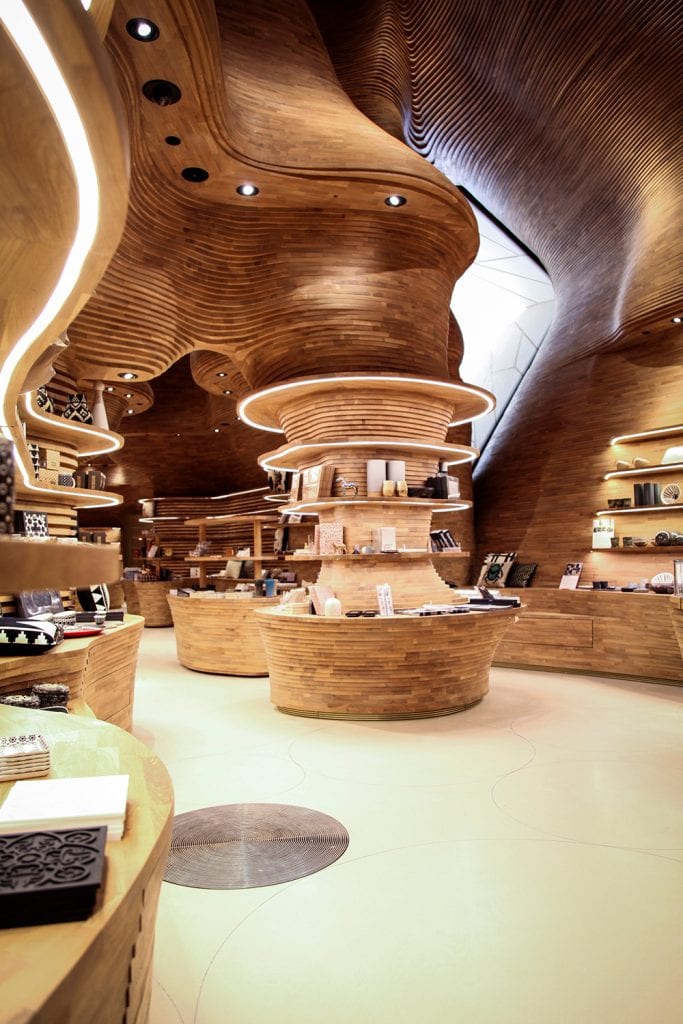 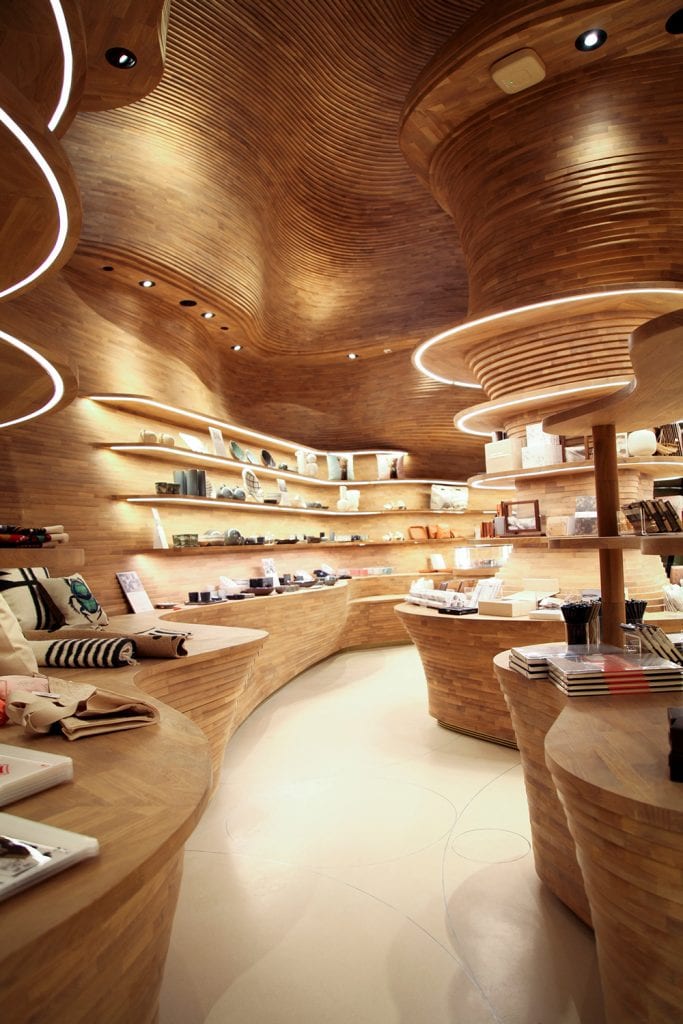 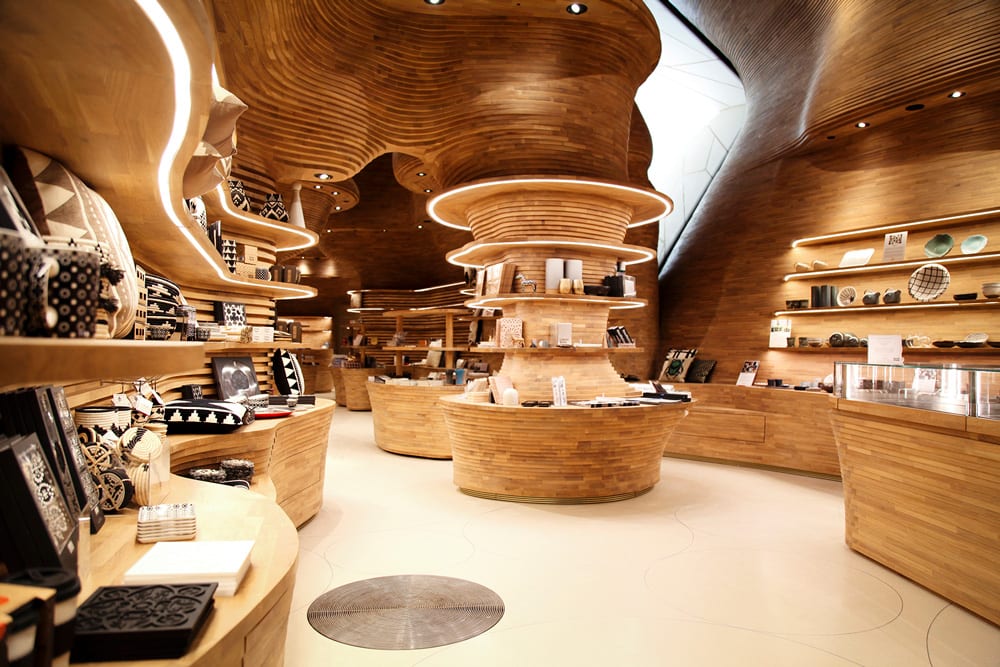 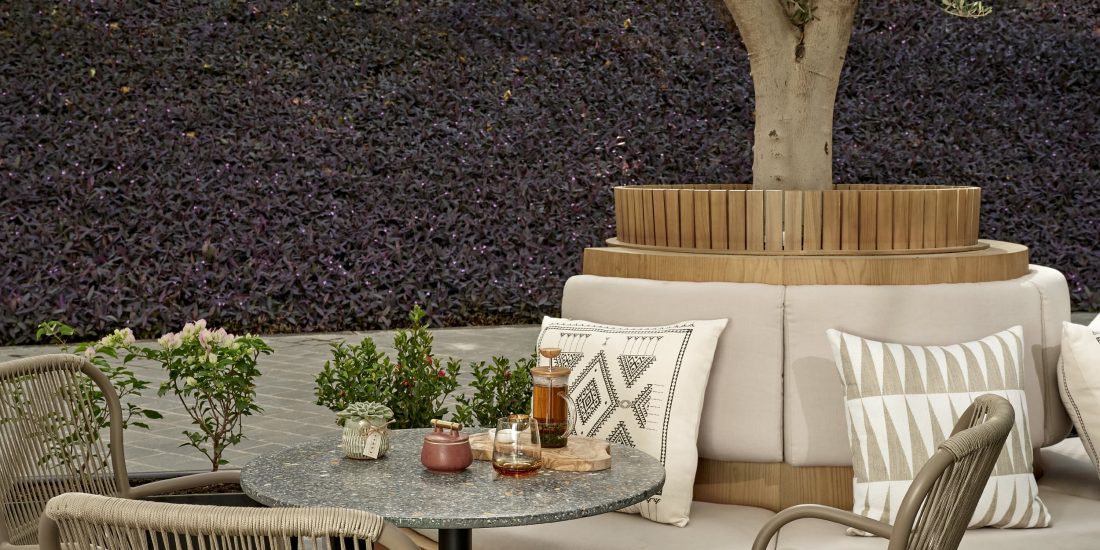 Design of the Twisted Olive 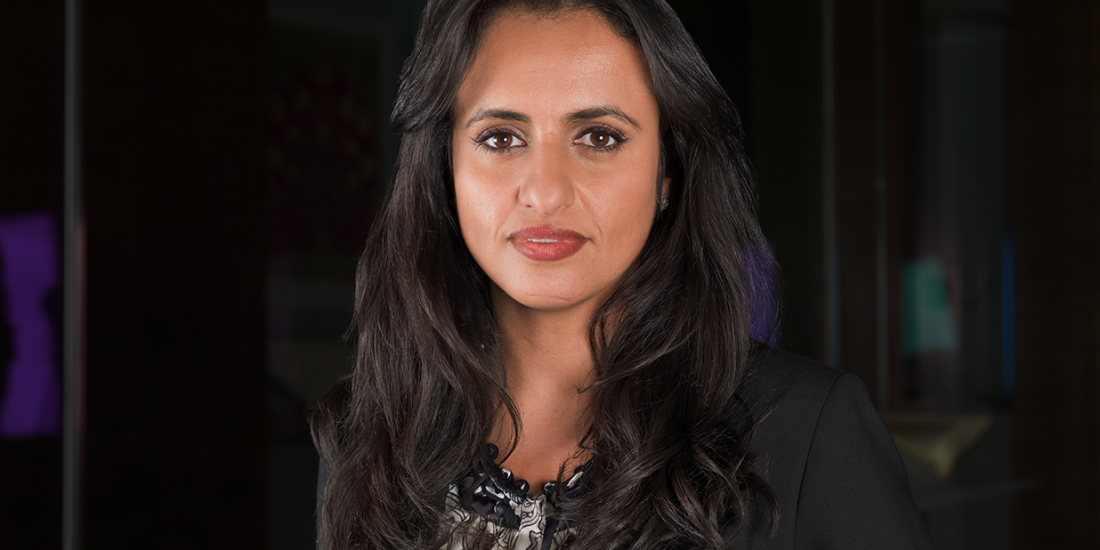 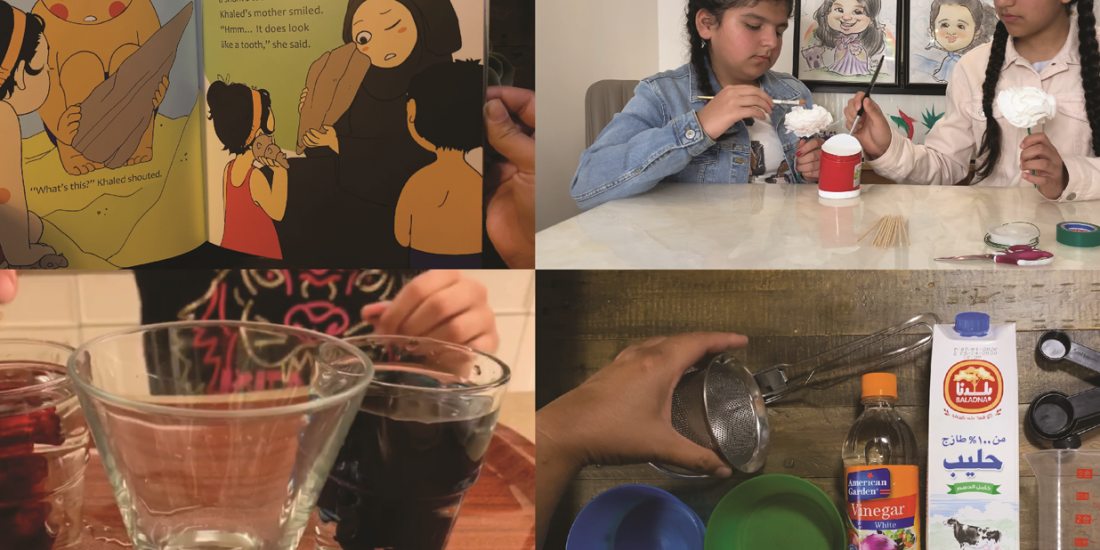