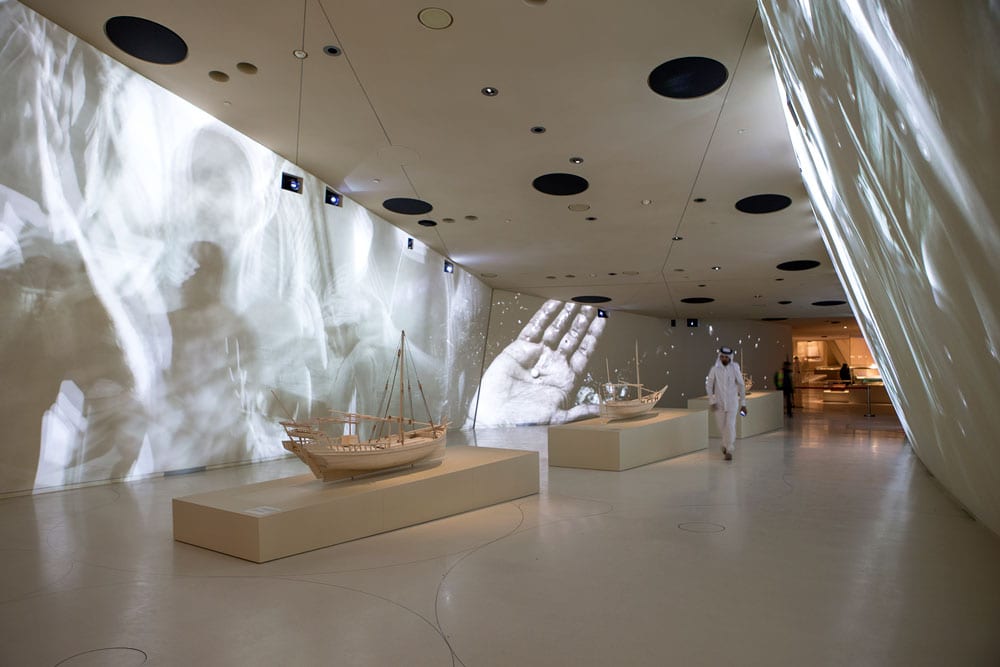 ALL EYES ON, Trending Now

Looking through the National Museum of Qatar’s museography with its star-architect, Jean Nouvel.

Nouvel explains this thus, “I have worked in close collaboration with the National Museum to launch the opening with a series of films that provide glimpses of different aspects of Qatar and its history. Made by filmmakers and video artists handpicked for their talent as creators of evocative poetic images, these films are sensitive testaments to past eras. They will never be shown anywhere else, as they’ve been made specifically for the museum and formatted to fit the shape and scale of the walls they’re screened on. The films translate the way the architecture is tailored to the expression of a museography specifically designed to evoke the scale and power of the land and history of Qatar, from time immemorial to the present moment.”

The museum tracks Qatar’s evolution and development. The story is told through a succession of films and multimedia displays, presented on the side discs or walls as we see it, accompanied by exhibits including archaeological and heritage objects, jewellery and other treasures, as well as manuscripts and documents. 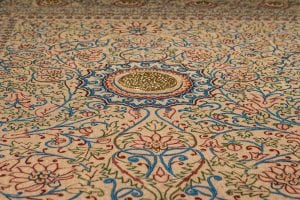 The Carpet of Baroda

Along the museum path, a grand cinematic atmosphere is created by a series of eight art films produced specifically for NMoQ by noted international filmmakers in association with the Doha Film Institute. These massive movie projections map the surfaces of the curving and flowing walls of the galleries, bathing the visitor in the emotion of the journey. Each filmmaker interpreted a chapter of the story in his or her own way. 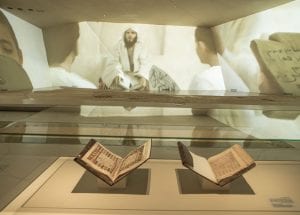 All the films were produced by the Doha Film Institute and shot within the borders of Qatar and the surrounding ocean waters. They are projected on the interior walls of the museum using a vast array of projectors and video servers designed and manufactured specifically for the needs of the museum, allowing a clarity of resolution never before seen at this scale. 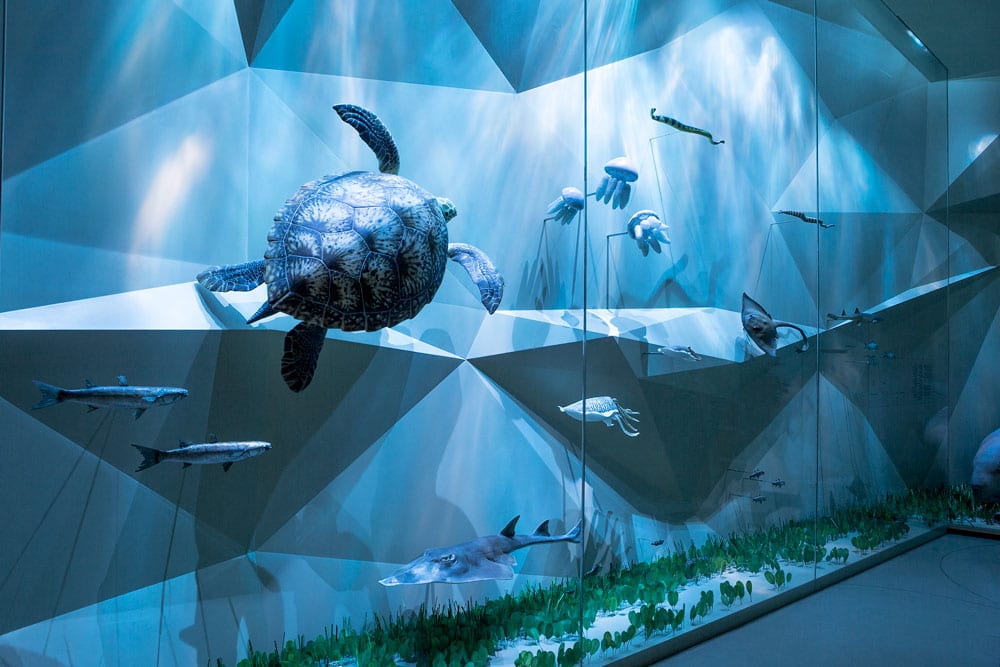 Natural Environments gallery at the National Museum of Qatar 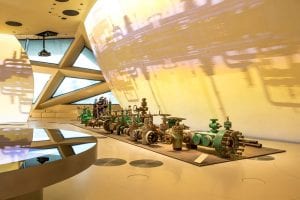 Another interesting part of the history of the country is Making Doha: 1950-2030, which is a temporary exhibition gallery and will present an exploration of the ongoing urban and architectural development of the capital city, on view from 28 March through 30 August 2019. Curated by Rem Koolhaas and Samir Bantal of OMA/AMO and Fatma Al Sehlawi and the Qatar based research team from Atlas Bookstore, and designed by a team from OMA/AMO, Making Doha 1950-2030 brings together seventy years of photographs, models, plans, texts, films, oral histories, and archival materials to chart Doha’s transition from organic growth to more modern and deliberate planning practices. This exhibition examines how the city of Doha was assembled and how its construction affected the global discipline of architecture, in a story told in across four major chapters: Seeds of a Nation (1950–1971), Modern State (1971–1995), And the World (1995– 2010), and Destination Qatar (2010–2030). The floorplan of the exhibition is designed as a timeline, with key moments punctuating the visitors’ passage along the narrative. A 115-meter-long curtain printed with historical collages lines the edge of the space.

While the museum seems to touch on the history of the country and tells its story extremely well, there seems to be a gap in its narrative. Where are the immigrants, the huge majority of the population in the history of the land, the labourers who have helped the country build it to what we see now? Those immigrants who are omnipresent in the everyday sphere, for even as you glance across the museum surrounding, you can spot many of these invisible faces, smiling and greeting the first visitors to the Museum. 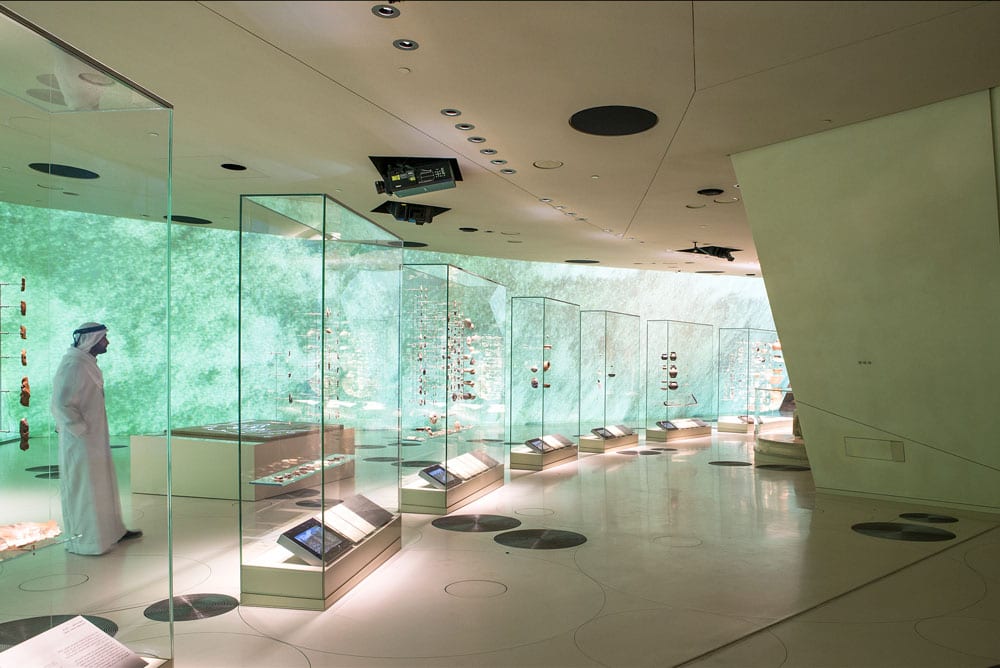 Core Chronology in the Archaeology of Qatar

The museum space is filled with interesting site-specific installations that lie around the spaces between the galleries making each nook and corner a spectacle worth remembering.

From Alfa, Jean-Nathan Othoniels’s water fountains outside the museum to the very striking steel sculpture by Qatari artist Hassan bin Mohammed Al Thani at the entrance to the permanent galleries called Motherland, evoking the connections between the desert, the sea, and the women of Qatar, each of the installations evoke a sense of opulence. 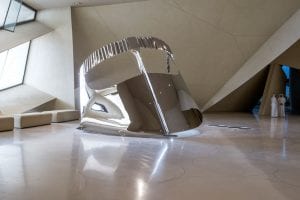 A sculpture by the Lebanese artist Simone Fattal, Gates of the Sea, inspired by the ancient petroglyphs found at Al Jassasiya, is installed on the walkway toward the museum’s entrance. Welcoming visitors immediately inside the building is a wall installation by Qatari artist Ali Hassan, Wisdom of a Nation, whose geometric design draws on the image of the Qatari flag and an excerpt from a poem by the founder of modern-day Qatar, Sheikh Jassim bin Muhammad Al Thani. Flag of Glory by the Iraqi artist Ahmed Al Bahrani is a sculpture of diverse hands united in holding up the flag of Qatar, and is located in the Baraha, or central court, that sits within the ring of gallery spaces and envelopes the Palace of Sheikh Abdullah. 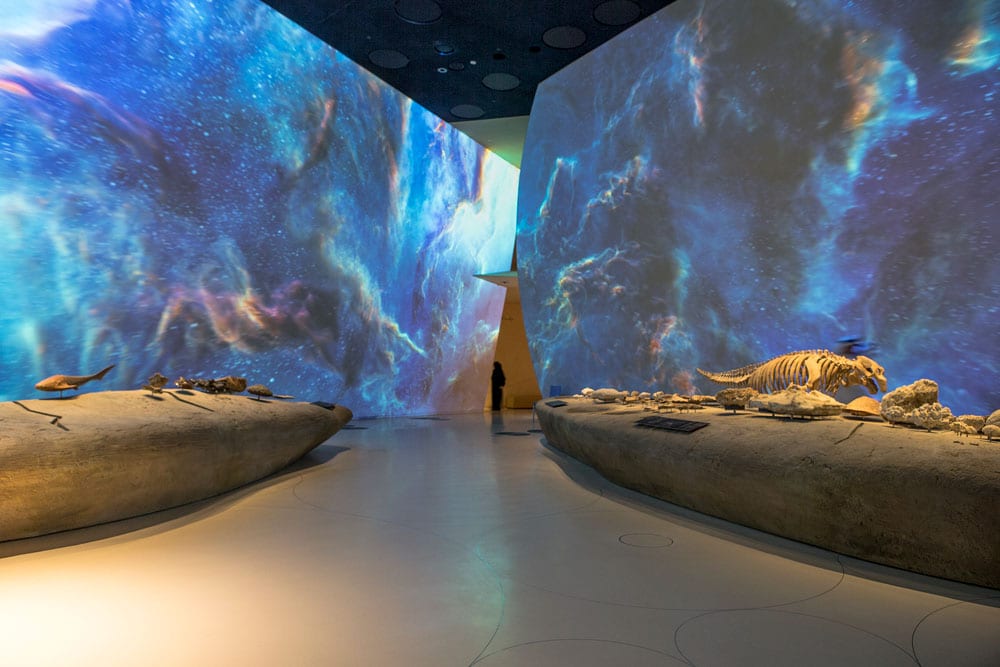 The Formation of the Qatar Peninsular – National Museum of Qatar 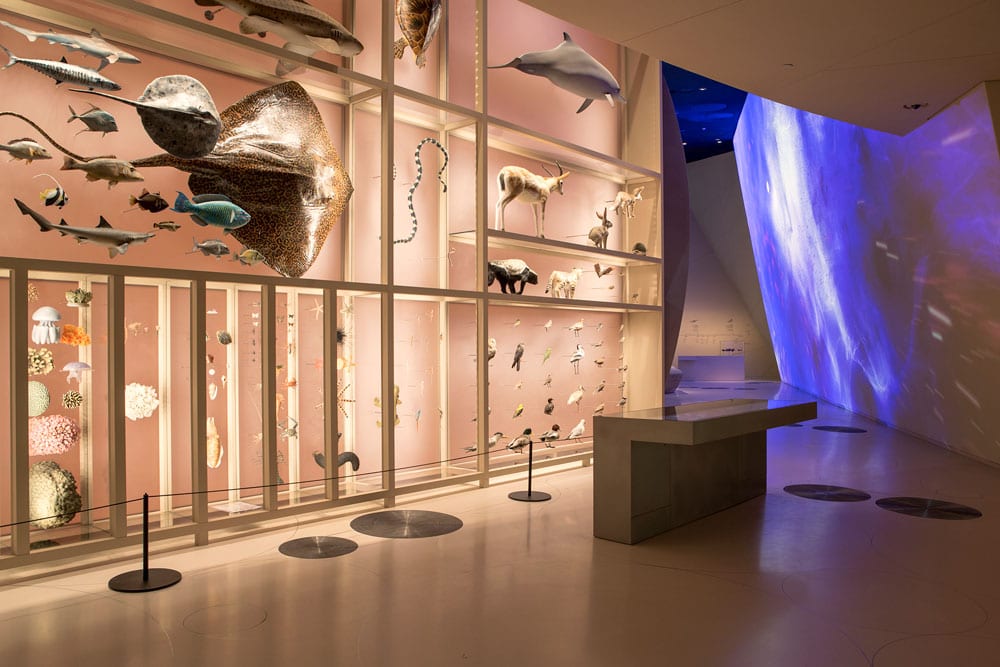 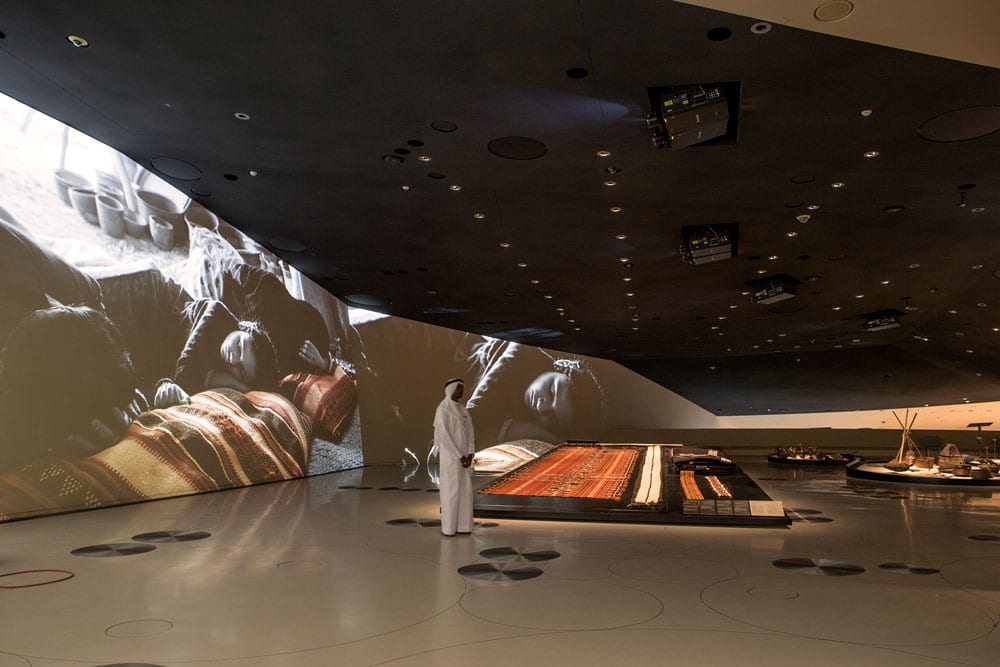 The Life in Al Barr (Desert) Gallery at NMOQ