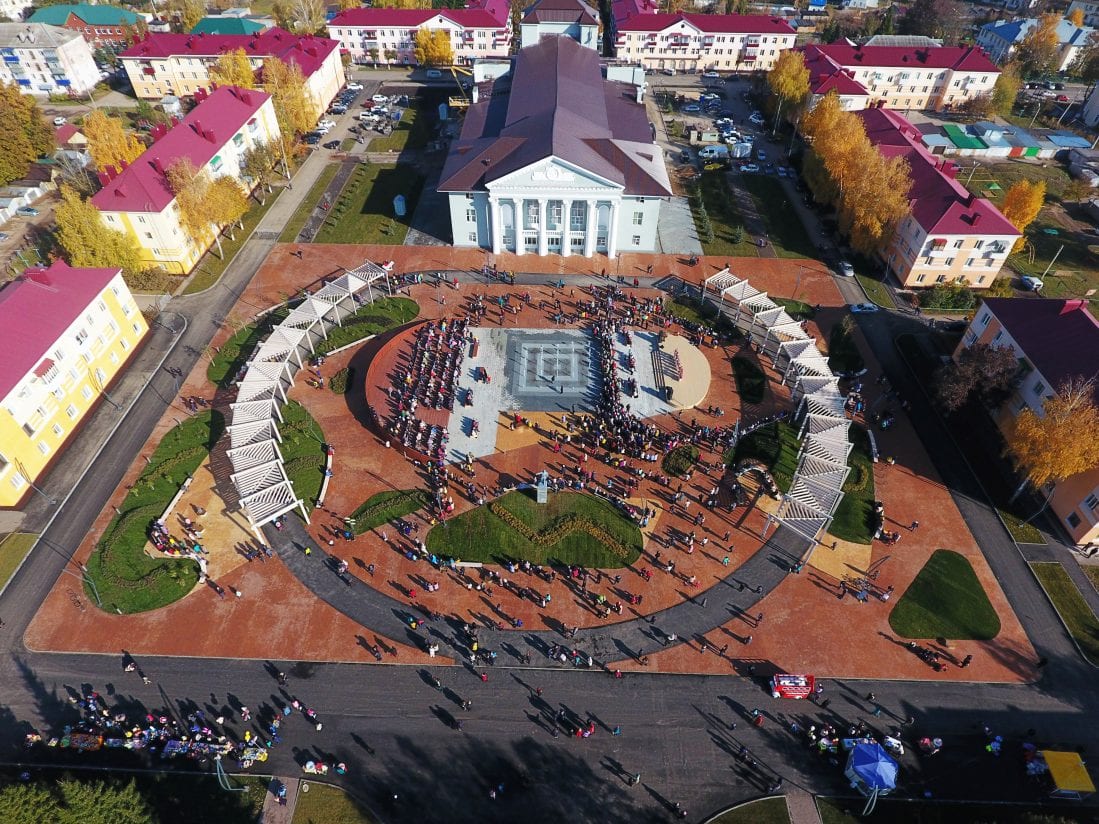 The Rebuilding of Public Spaces in Tatarstan

Impressive in its ambition to improve the quality of public space throughout the Republic of Tatarstan, the Programme’s success lies in its inclusive approach. The projects, which are purposefully located in many communities, attempt to elevate the importance of communal space, touches on the diversity of the winners of the Aga Khan Award in Architecture. 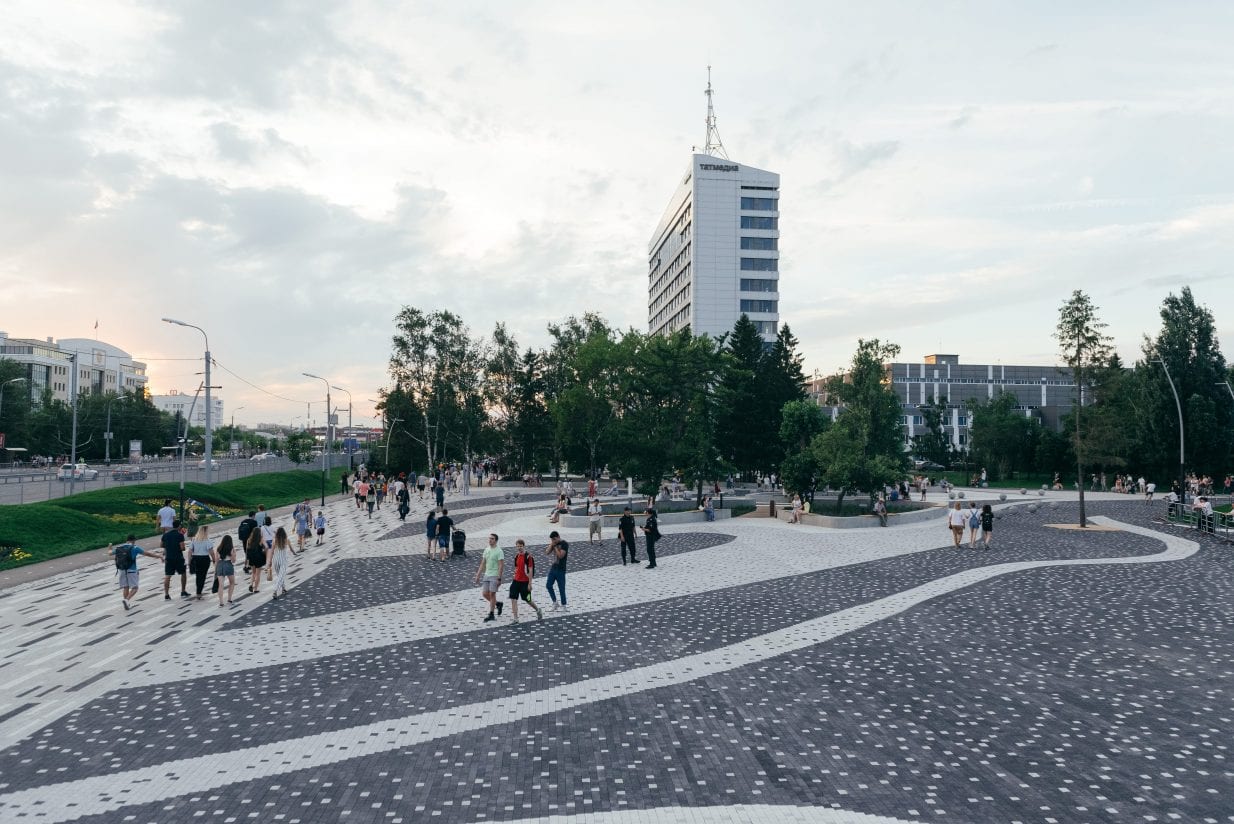 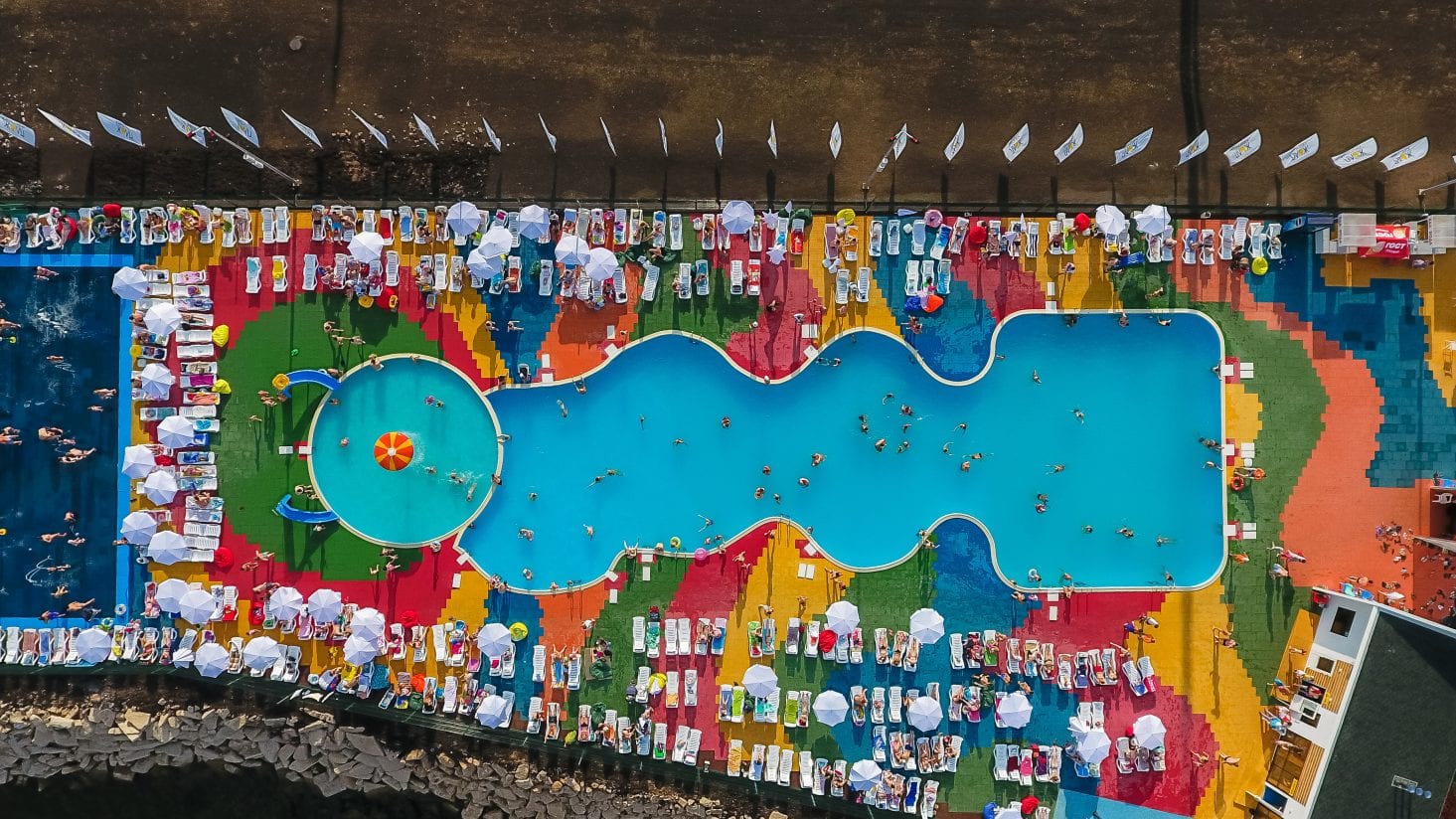 Aerial view of the swimming pool by the city beach, Almetyevsk. 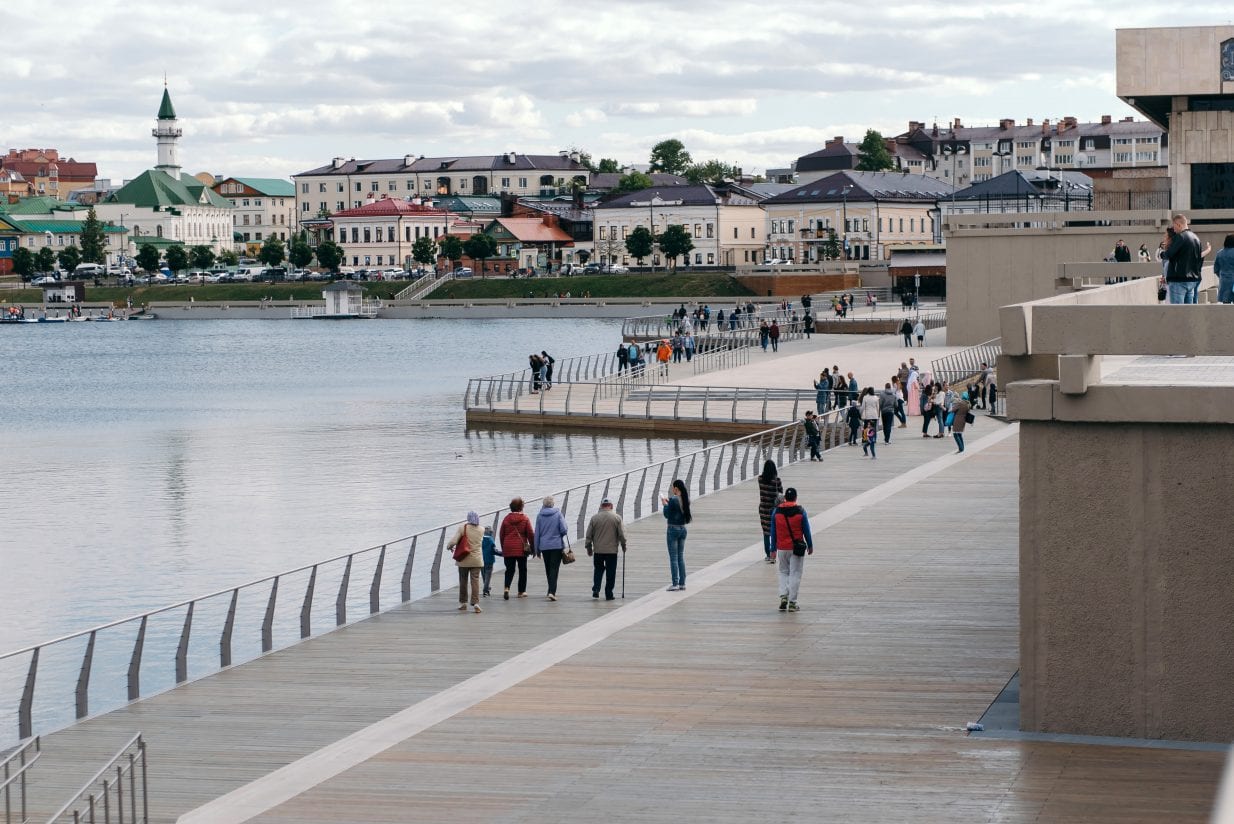 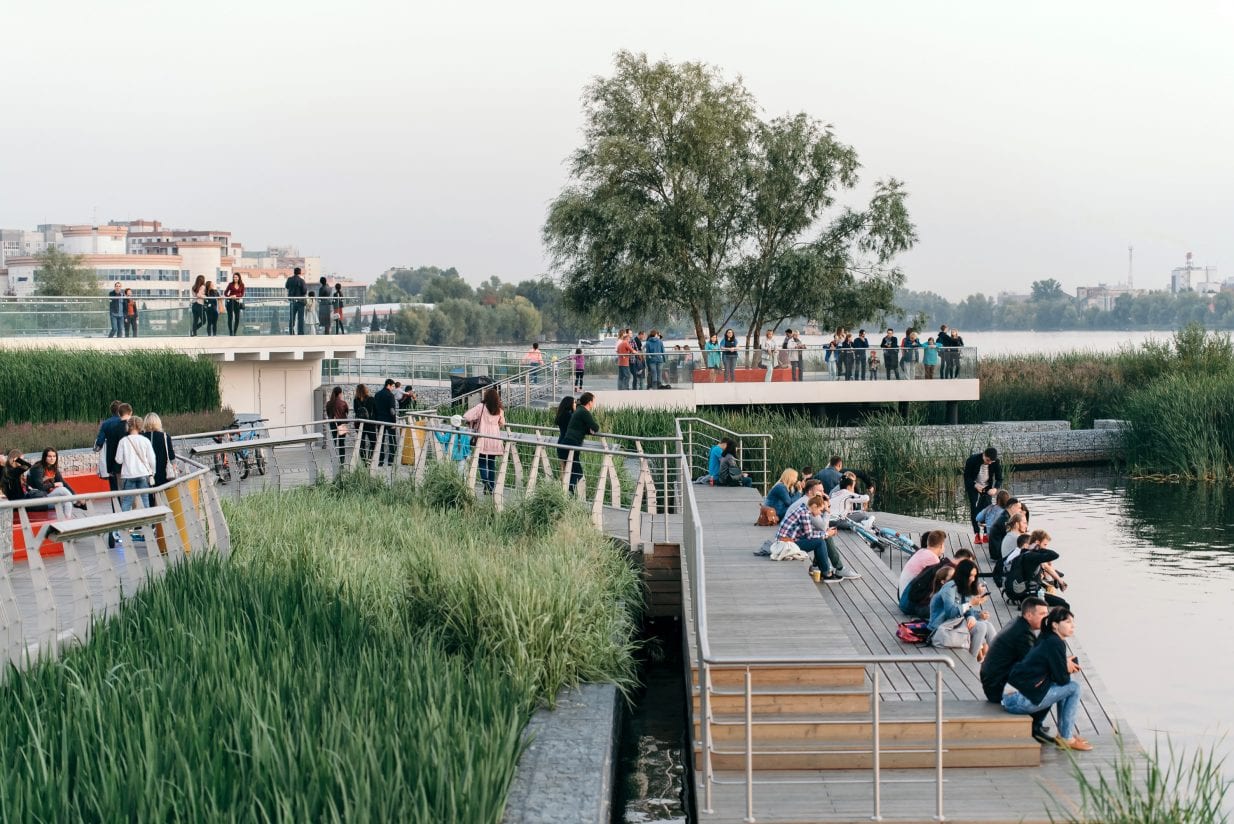 Tatarstan’s Soviet period, beginning in the 1920’s, saw much modernist construction and hierarchical centralized planning, with diverse urban locations made to look alike. Many mosques and churches were destroyed, leaving their associated public spaces functionless. The post-Soviet era, since the Republic of Tatarstan’s foundation in 1992, brought freedom of movement and an exodus from rural towns. Also, a return to private real-estate ownership enabled wealthy individuals and businesses to buy up large swathes of land, notably in scenic lakeside and forest areas, thus limiting the population’s recreation options in most post-soviet countries. The ambitious Public Spaces Development Programme seeks to counter these trends and to offer equal quality of the environment to all Tatar citizens, regardless of settlement size – as well as reinstating a sense of individual place in each. From its inception by the President of Tatarstan in 2015 until the end of 2018, it had transformed 328 spaces across each of the Republic’s 45 municipal districts, covering 33 villages, 42 towns and two major cities, and embracing both Soviet and longer-standing historical settings. There are ten different project types: water bodies; ponds; embankments; beaches; parks; public gardens; boulevards; squares; streets; and walkways. Most include infrastructure for cultural activities. Unified wayfinding signage, furniture, and ornamental features reflect aspects of each place’s culture or history and are produced locally to a high standard, incentivizing small businesses. The spaces are conceived for year-round enjoyment, including during dark winters and heavy snowfall, through eye-catching lighting and sometimes winter sports facilities. The snowfall offered a further challenge of limiting construction to the period from May to November. Some projects are initiated by members of the community, others by the state. In all cases, the design and implementation process is highly participatory, based on strong engagement with local citizens and extensive consultation of economists, anthropologists, dendrologists, and others. An architectural bureau initiated by the Programme’s curator has become a magnet for young local and national talent, with many of its recruits going on to set up their own practices to oversee one of the larger projects. The positive changes seen are social, economic, cultural and ecological as well as physical. The success of this initiative has led to the introduction in 2017 to a similar program at a federal level. 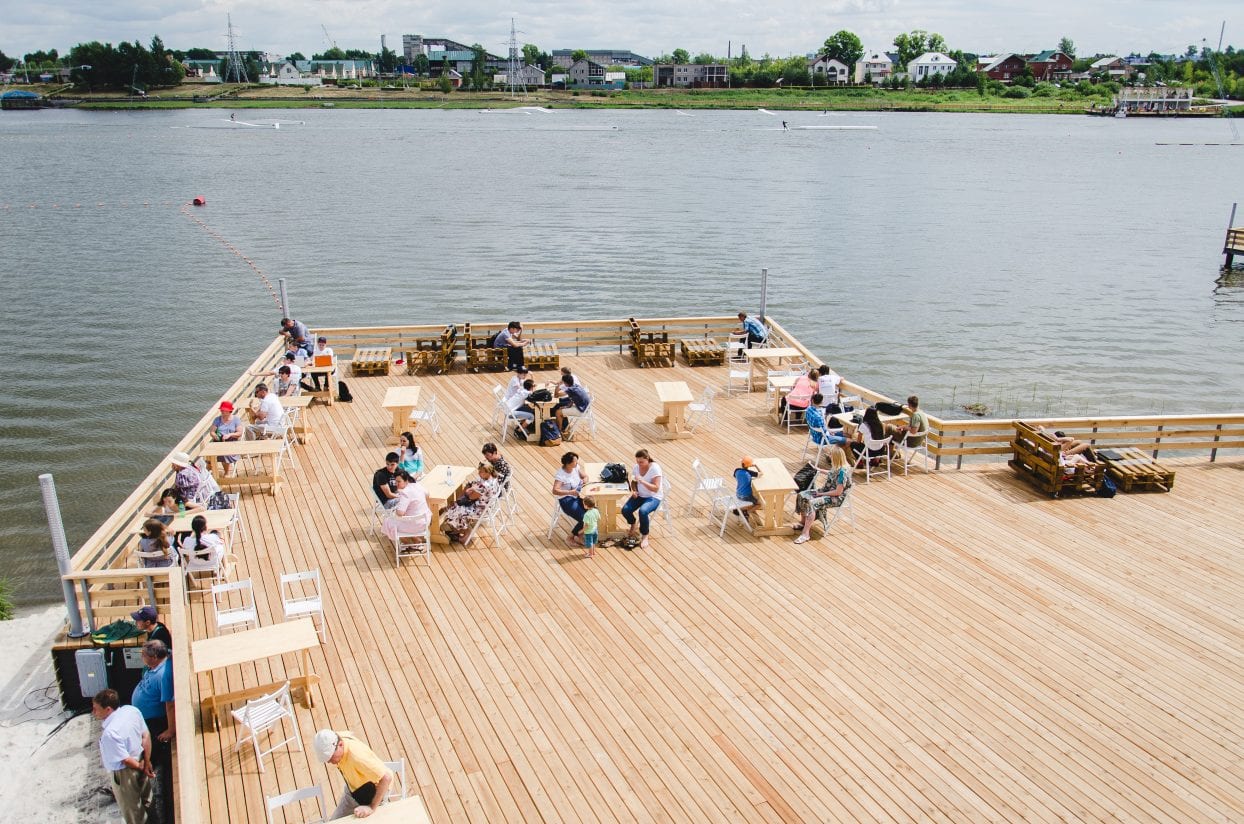 It is important to understand the role of the public in such projects – in reinforcing the sense of community, the identity of the villages, towns, and cities, and the role it plays in the development of civil society and the quality of life. 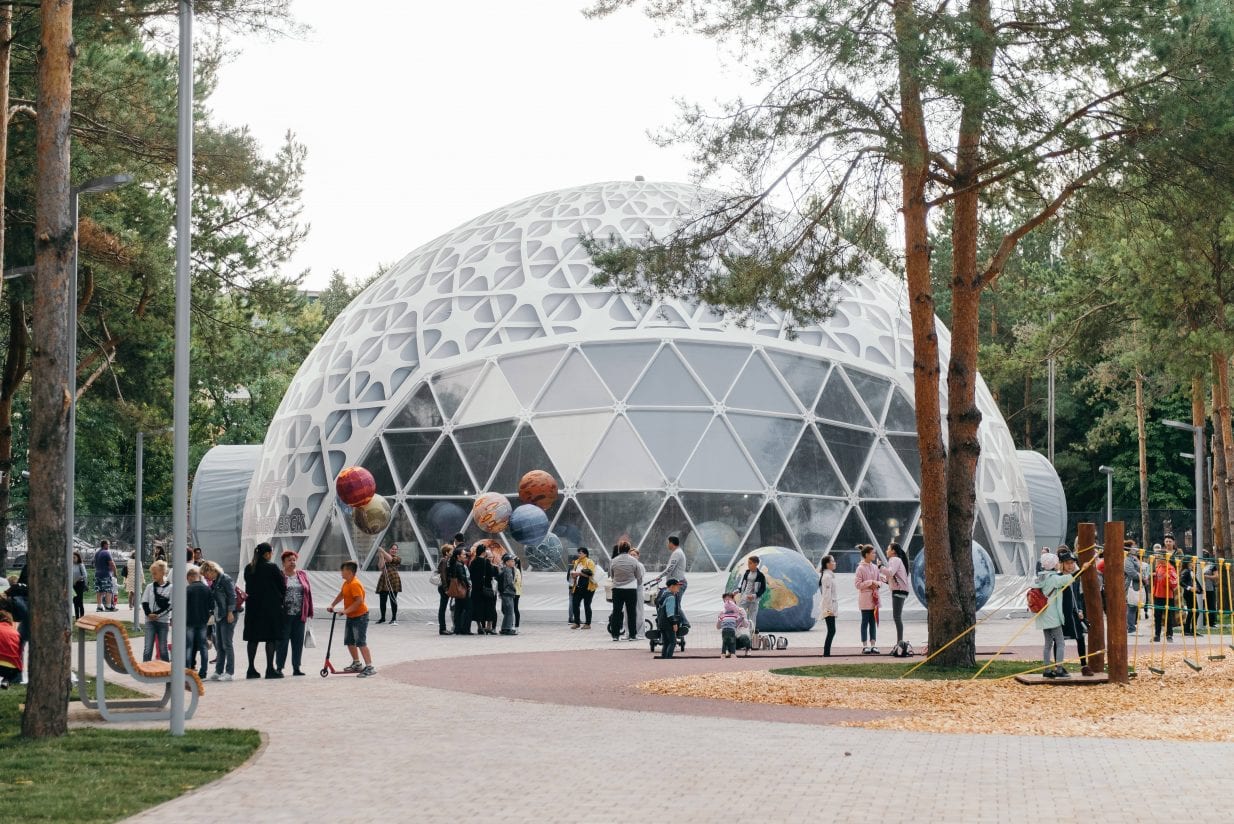 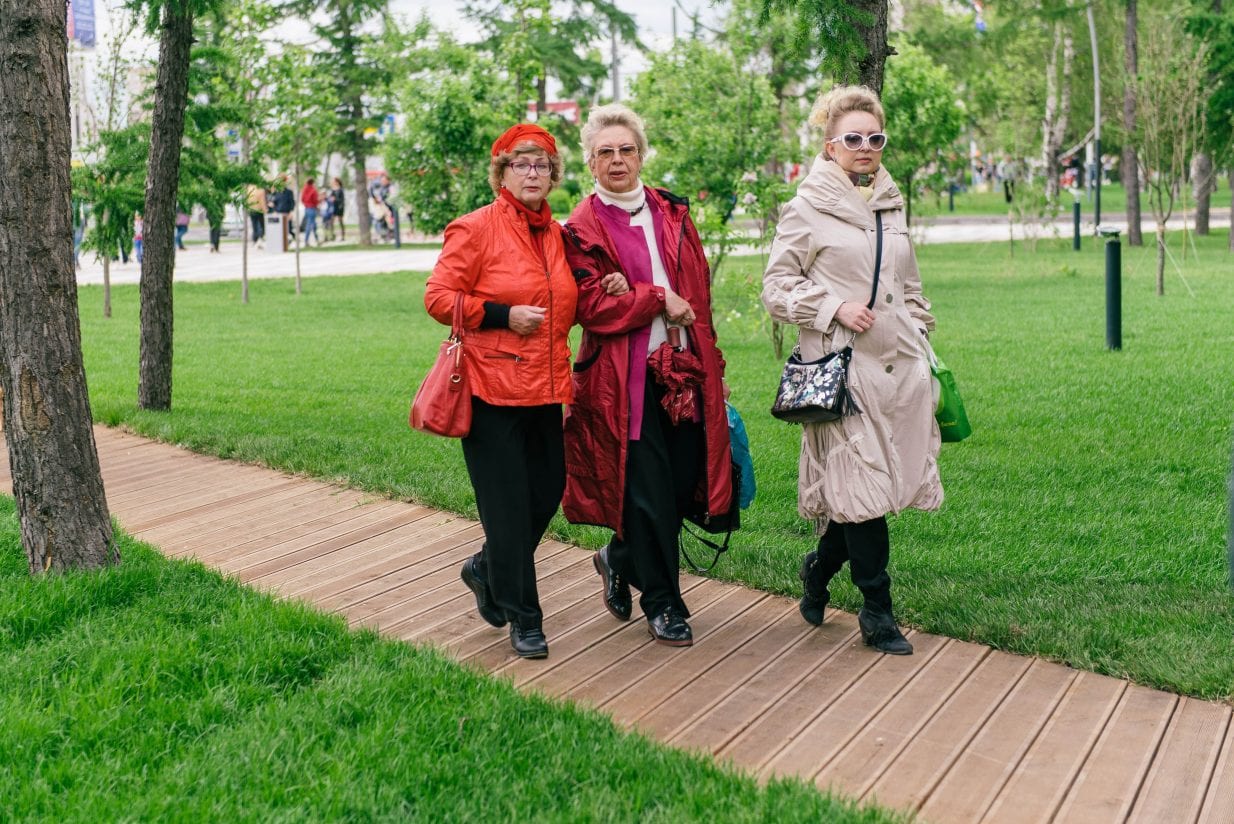 The Programme is also designed to compensate for the badly conceived and often inappropriately scaled spaces wrought by central planning during the Soviet period. The initiative also promotes the importance of nature, even in locations defined by their industrial character, while working to protect the public good from the tendencies and interests of private ownership.

The scale and diversity of the 185 projects completed by the end of 2017 have required different types of responses and ideas.  It is evident that the long-term success and sustainability of the project lies not only in its larger vision and political leadership, but also in the realisation process, which has emphasised engagement and dialogue, the involvement and encouragement of young architects and designers, and the participation of users and the community. 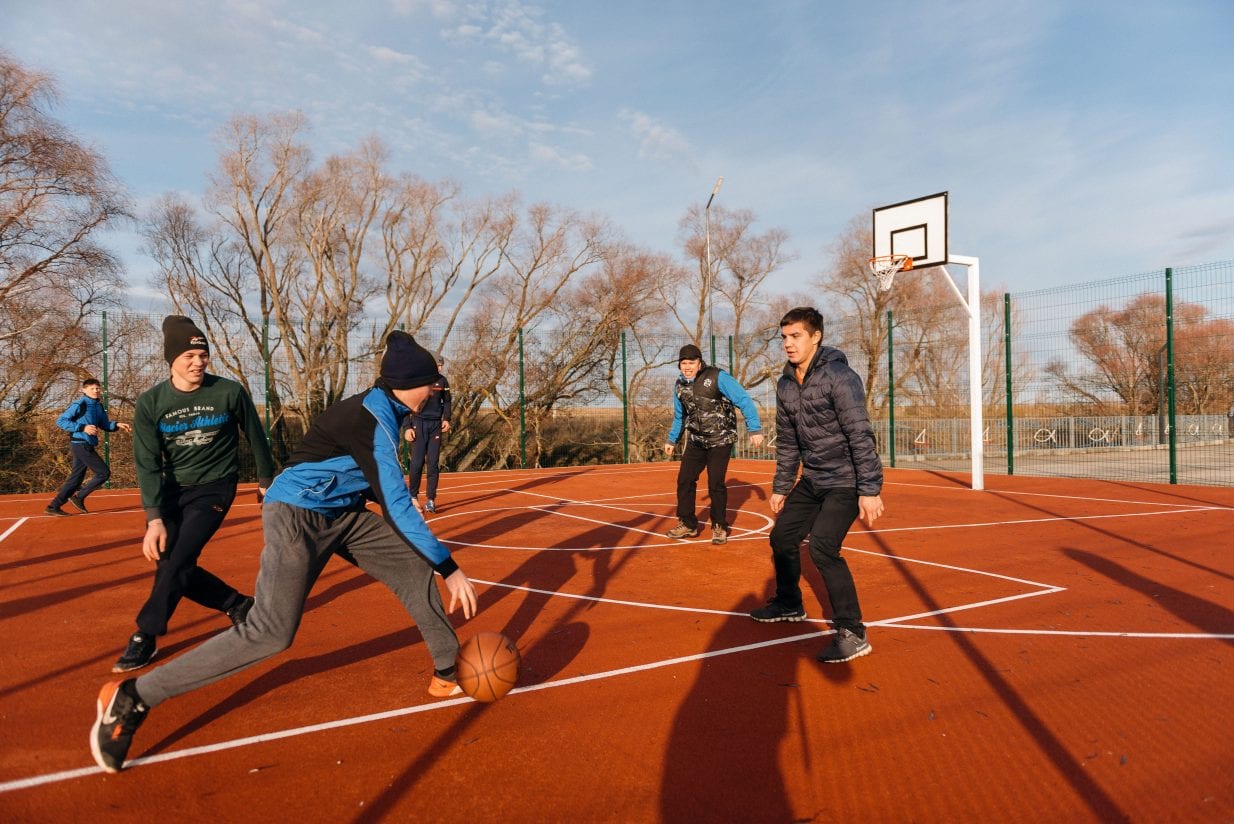 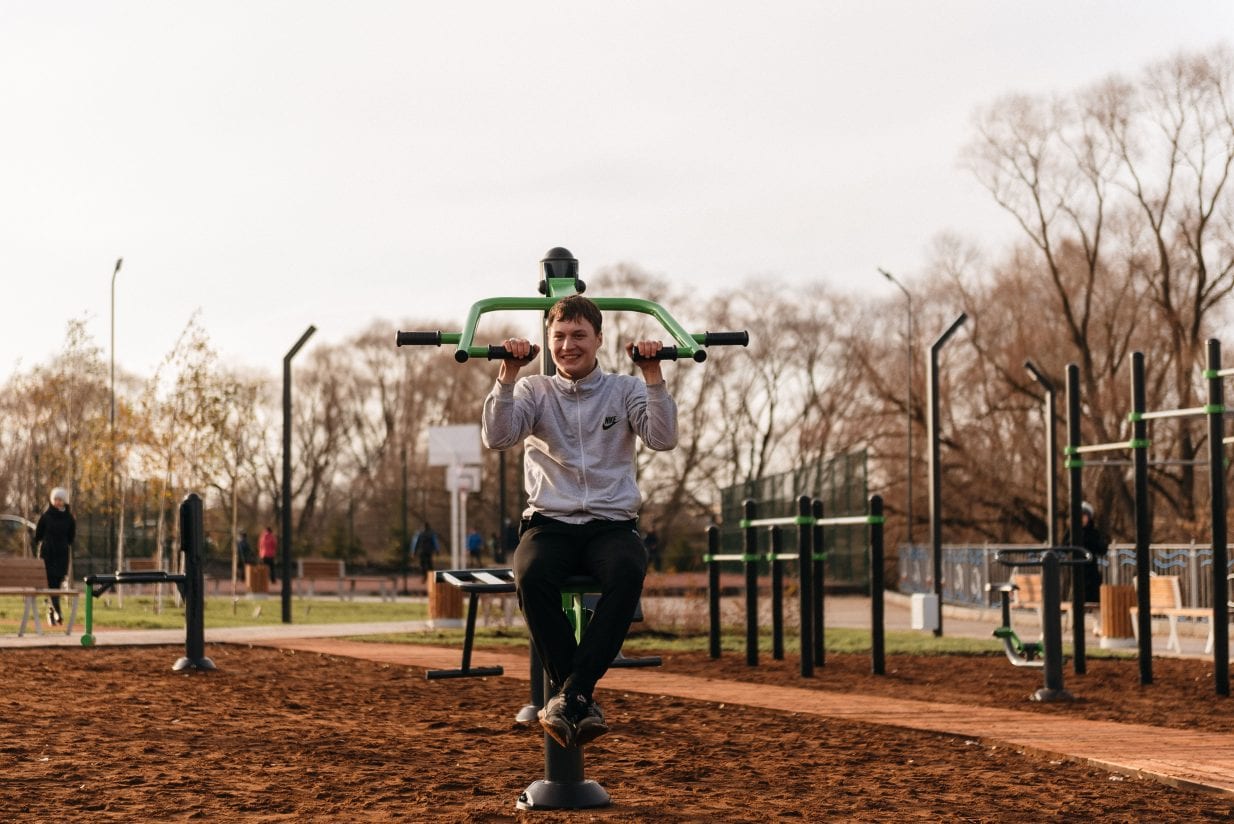 Patron Rustam Minnikhanov, President of the Republic of Tatarstan

Cabinet of Ministers of the Republic of Tatarstan

Ongoing Construction: May 2015 –ongoing 185 of the total of 328 projects have been completed by the end of 2017 and therefore considered eligible for the 2019 Award Cycle of the Aga Khan Awards in Architecture. 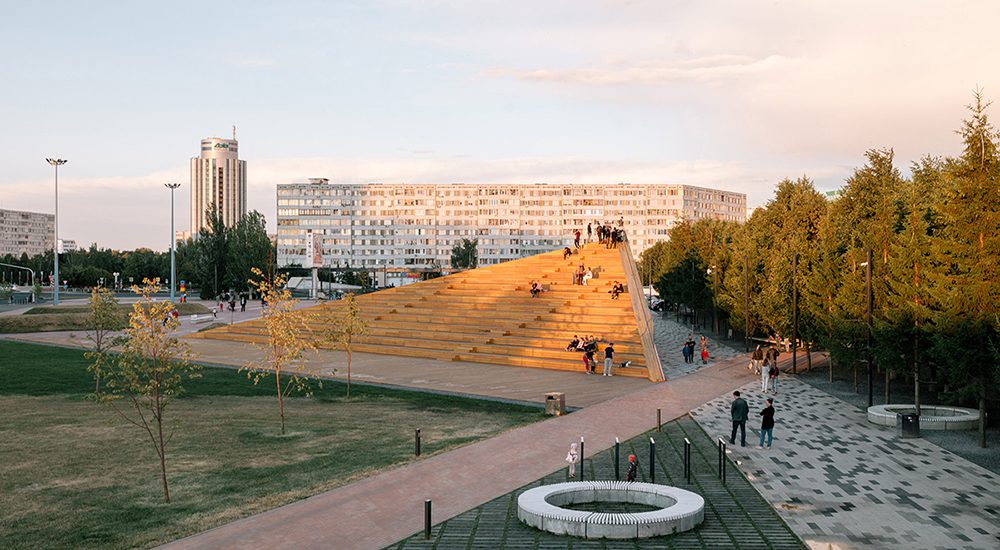 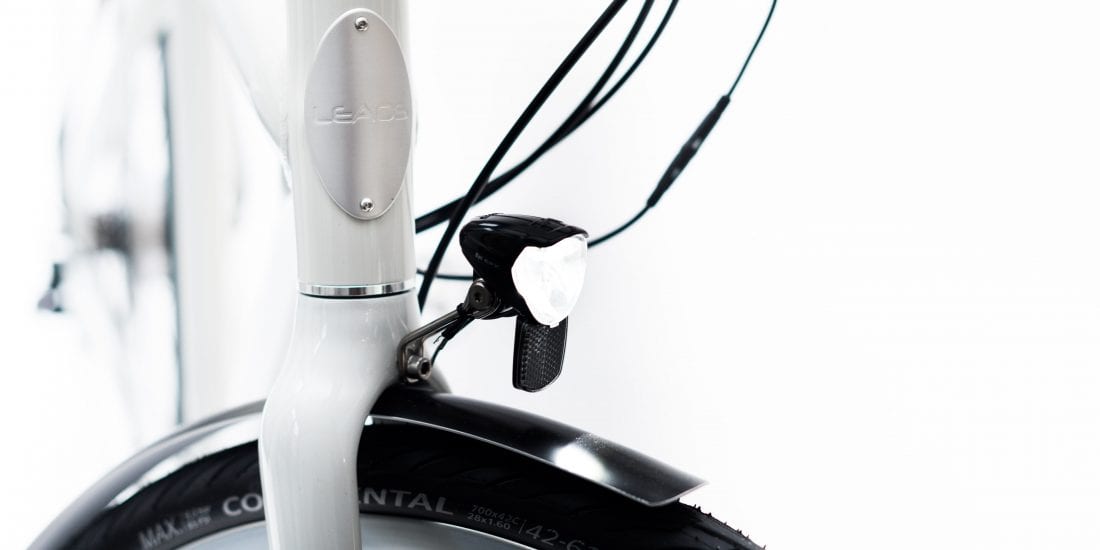 As we move on to the New Year, we propagate the upside of sustainable living and thus 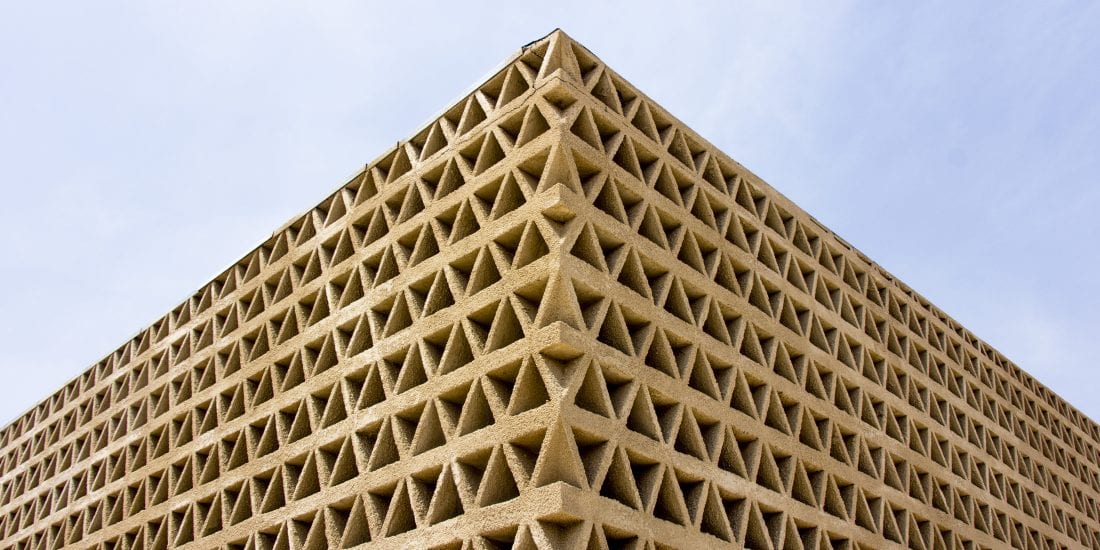 The next Aga Khan winner SCALE is focusing on is from Senegal. The Alioune Diop University Lecture