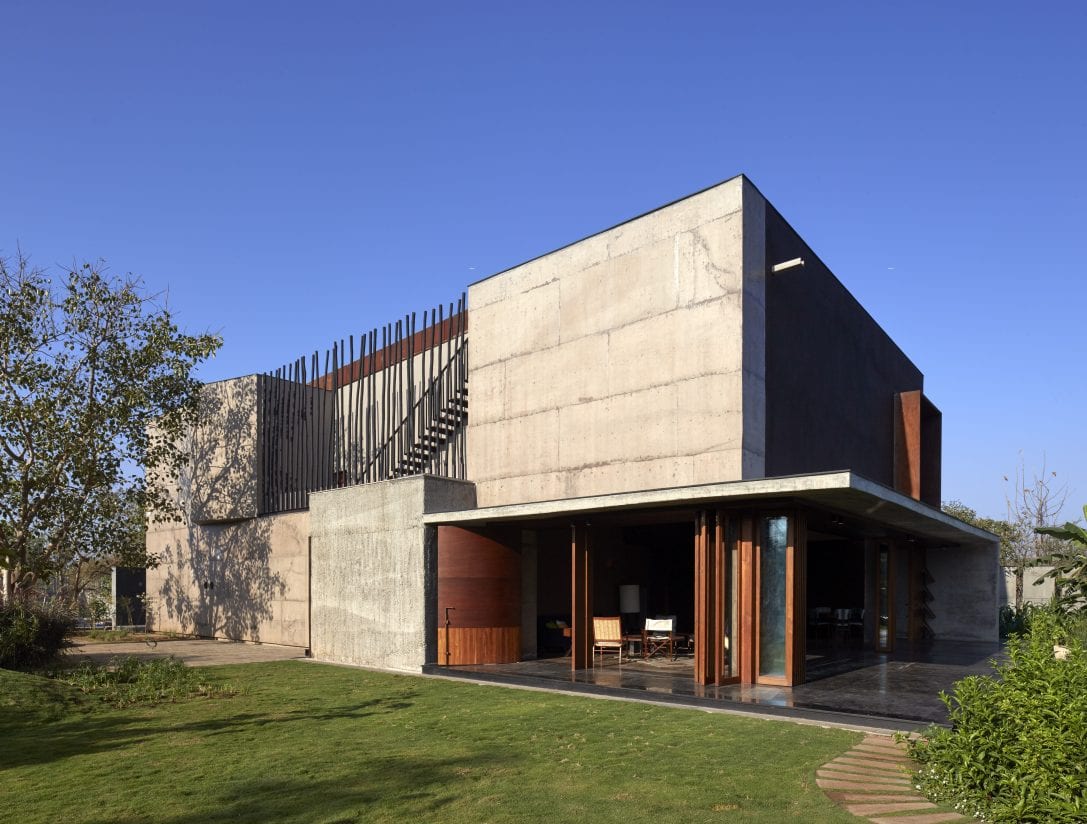 In the mood for love? Mumbai-based Sameera Rathod Design Associates draws poetry between a piece of architecture and a mere building. Aarthi Sriram takes you on a dream journey through this setting…

“Set on the foothills of Maharashtra in Alibaug, far away from the busy city life of Mumbai. The plot was a dry barren piece of parched earth. When I first saw it, there were two lonely trees; a view of the hills in the distance and dry fields all the way to the sky, all around. In that scorching heat, there was only one desire- to be lulled back into that familiar dark, cold, calmness. The courtyard house of southern India does this well, with its overarching low-slung roofs and a central courtyard around which the rooms surround. The idea of this house began here,” says Samira Rathod, Principle Architect at Samira Rathod Design Associates. 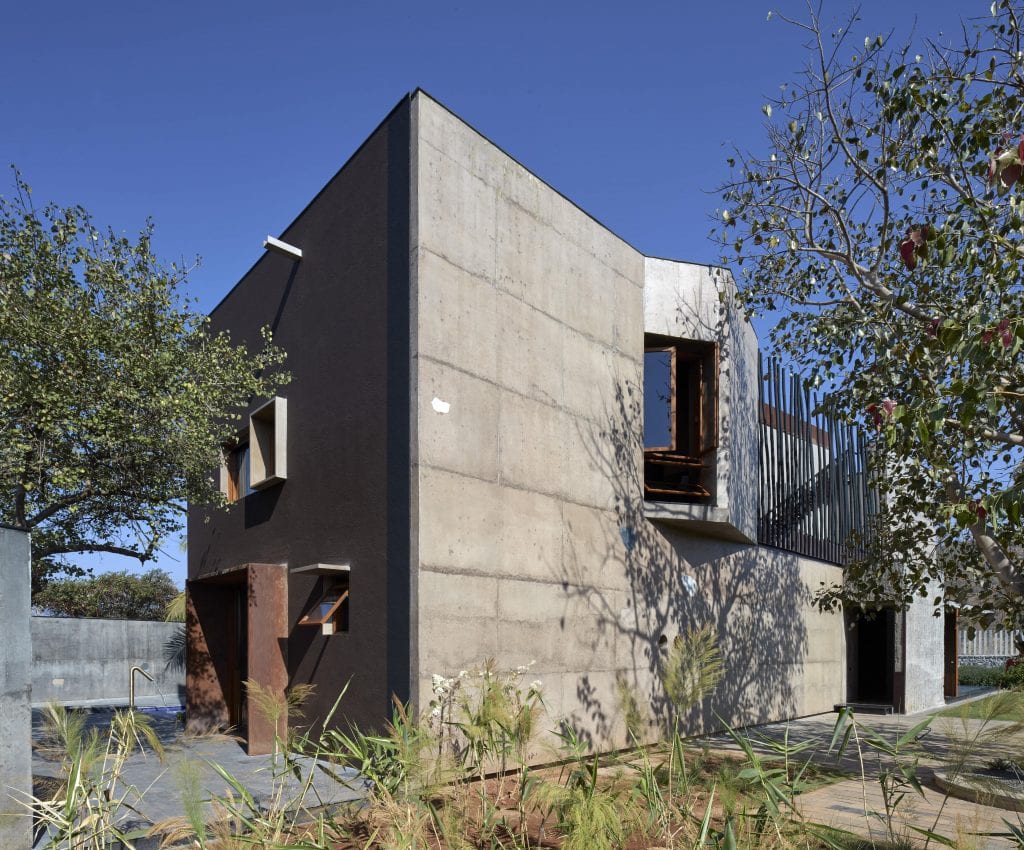 This house is carefully sited between the two trees, grazing its walls into its crown; its three bedrooms and living spaces surrounded by a half-bounded courtyard with a sliver that opens into a small plunge pool; indigo blue water, that spouts out gushing waters. The sounds of the gushing water make for a cooling delight.

The courtyard is marked with the babul tree for shade, which as it would grow would engulf its entire space and suffuse the house with its blazing fragrance and tiny white flowers every morning. 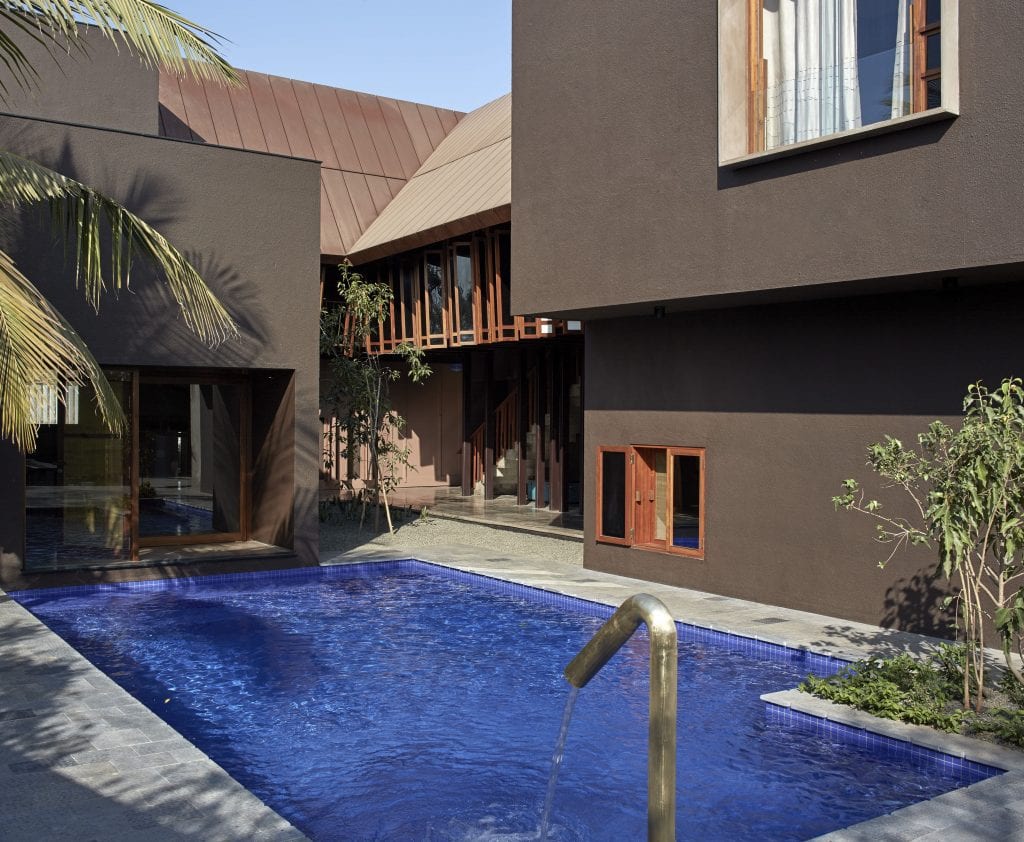 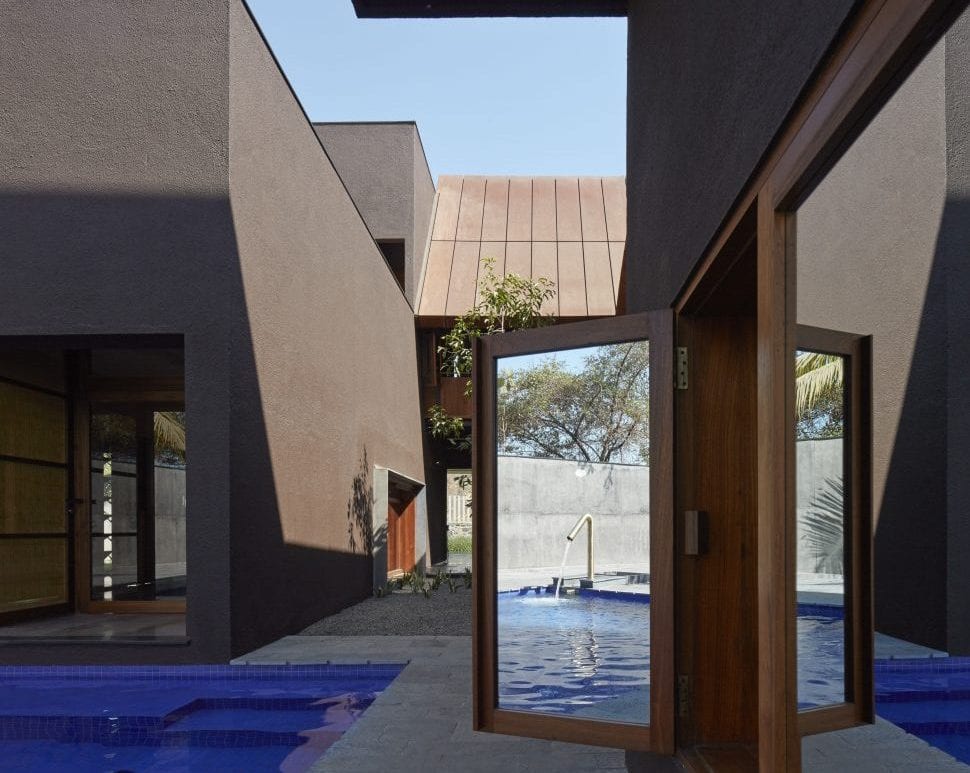 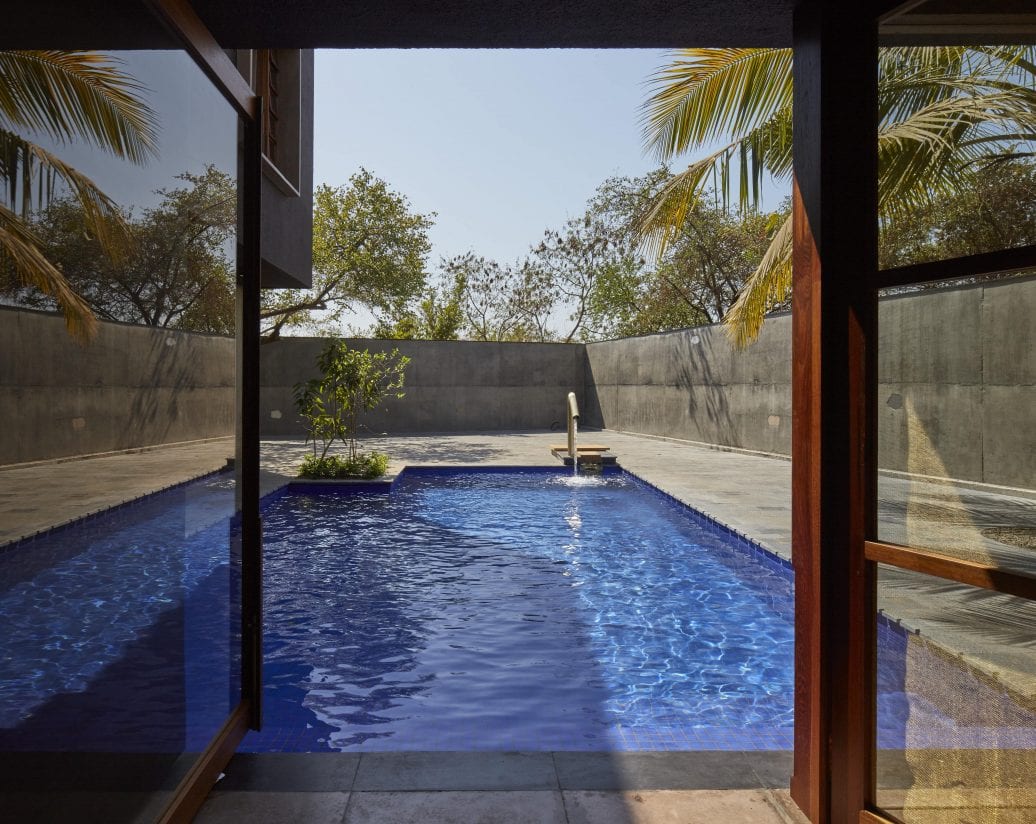 “Architecturally the courtyard doesn’t open to spaces, but instead, to a broad corridor that works like a woody bridge holding a study, under a sweeping corten steel roof and ties all the upper rooms into a single floor. But the sun is unforgiving; its screeching light needed to be quietened with shade and shadows. From here, emerged the language of its tectonics, both for its architecture and landscape,” the architect adds. 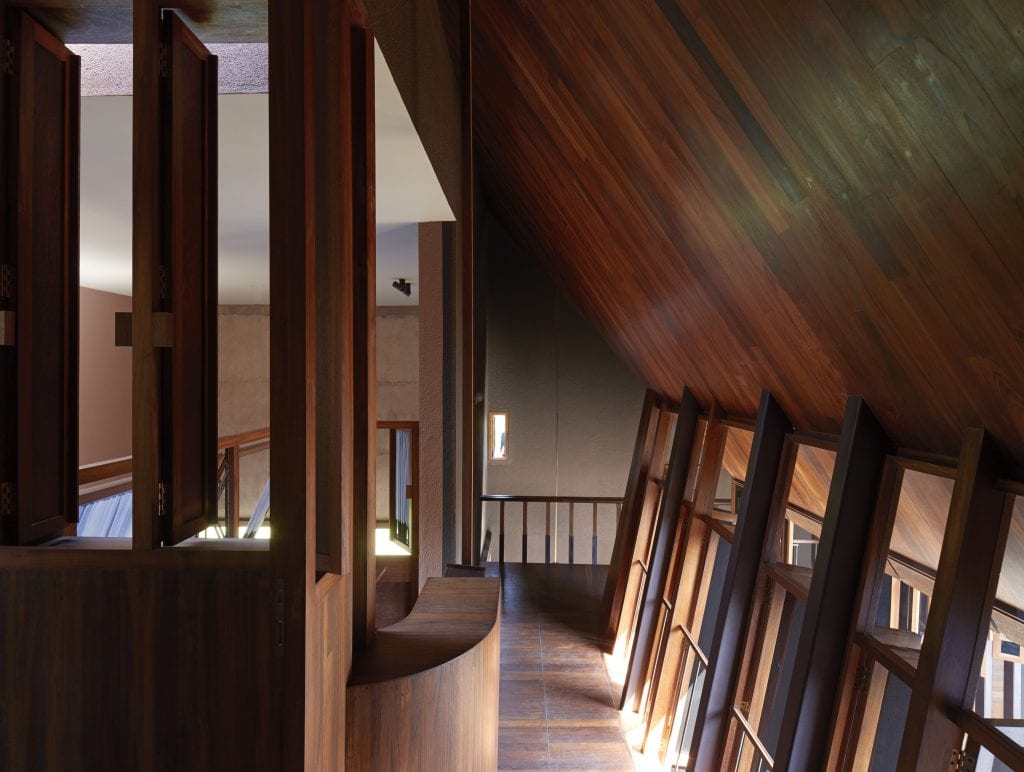 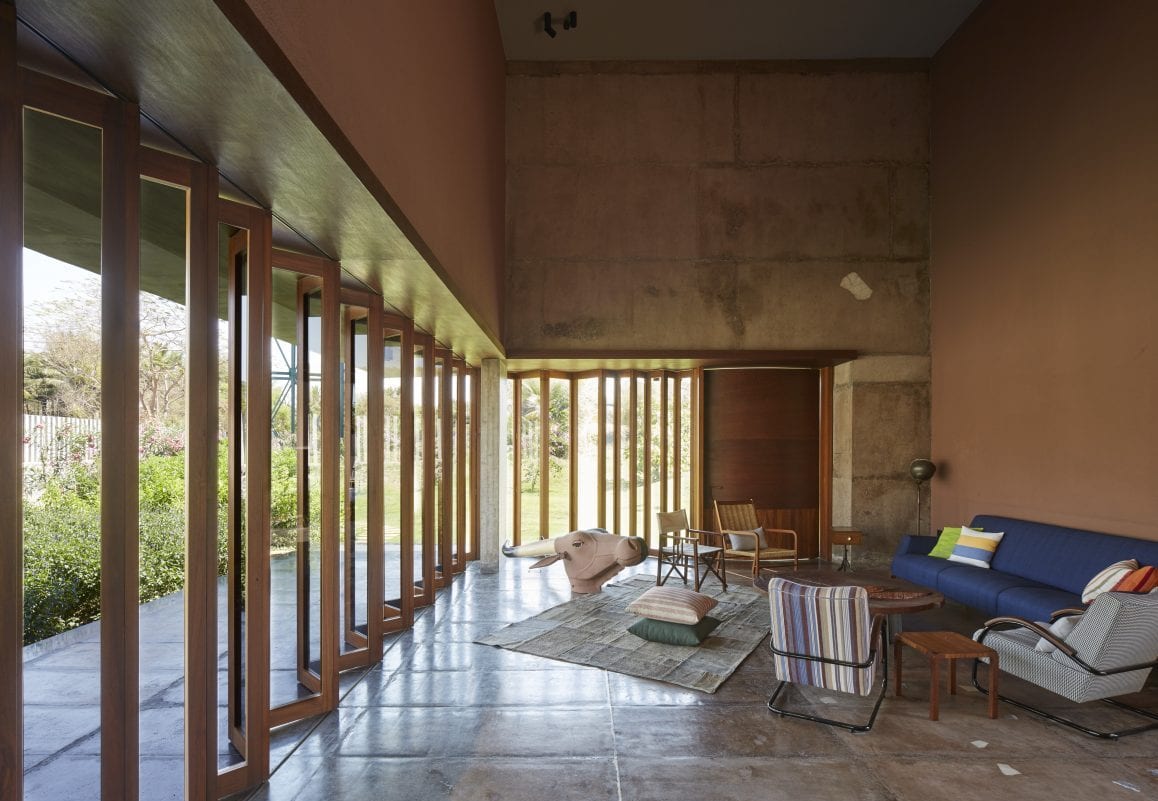 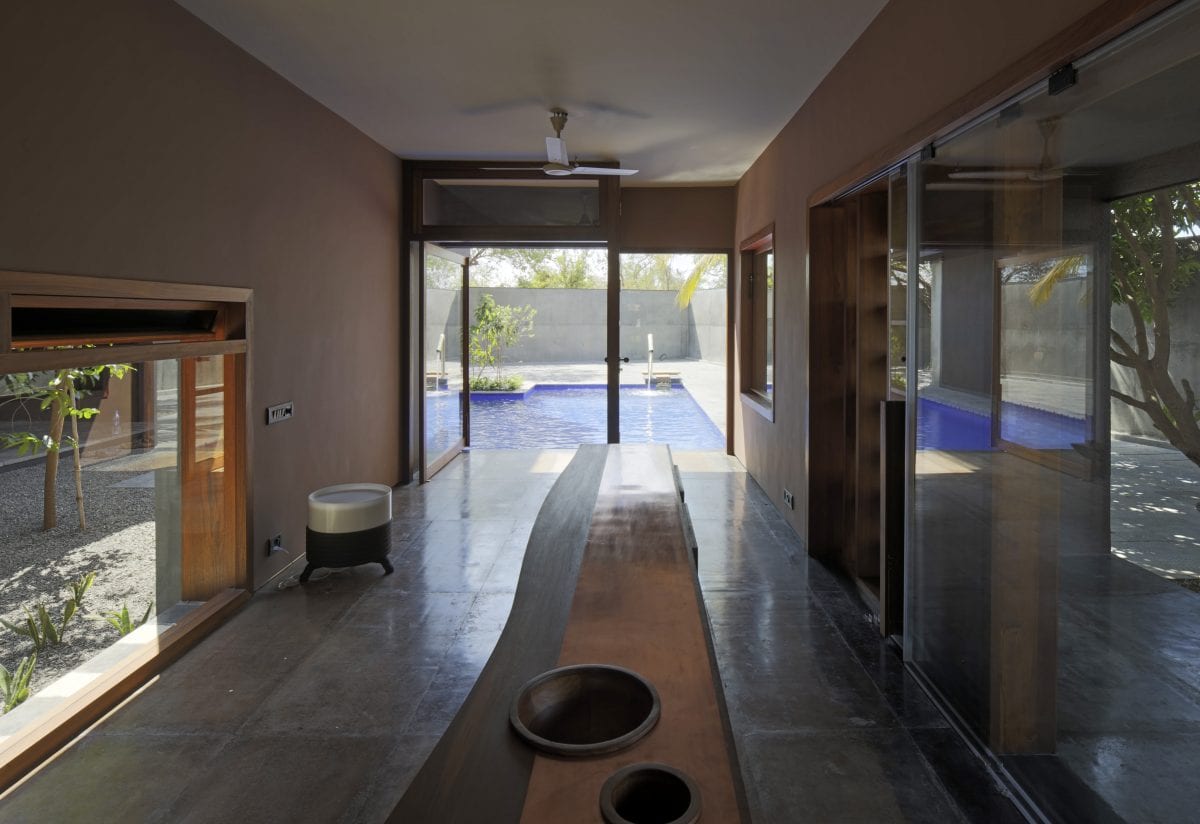 As one enters the house, the long walk from where the car leaves you, in between walls of tall grasses brushes against the skin and a carpet of rolling green mounds that form a seamless edge to the site. The house is conceived in shredded layers, as it unravels spaces, each rendered in a different intonation of light.

The first of its layers, on the southern side, is a thick, dead, colored concrete wall, a heavy thermal curtain to ward off the heat. The second layer is the corten steel pitched roof over the woody bridge, holding the study area with windows like piano keys, alluding to old homes in the hills of Northern India. The stairs and its sliced wooden railings, the bridge held by the steel portals the accordion windows of the living room, legs of tables, the flooring patterns, and soft cotton sheets, all form a larger subset of overlapping layers. Its every element is designed and detailed as if to obstruct light; shredded. The house is designed like a sieve through which light is filtered, dappled and draped into its hollows. 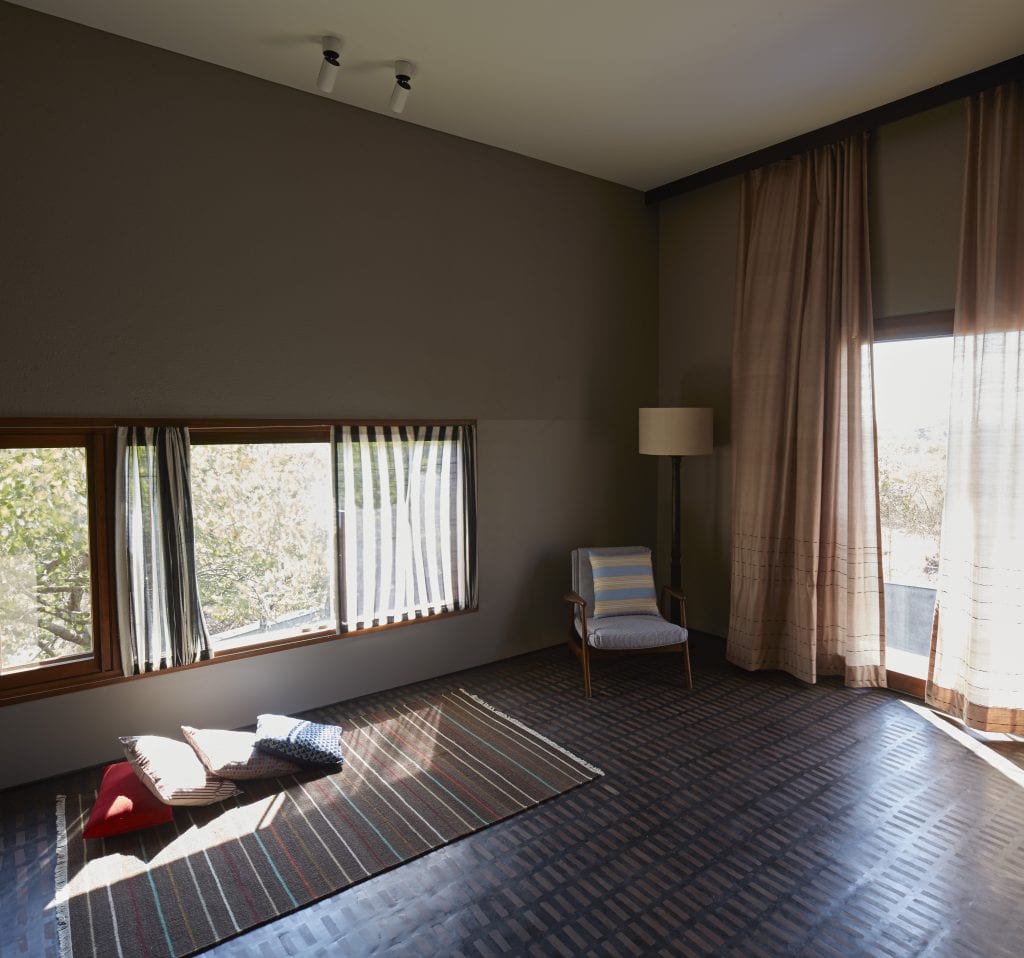 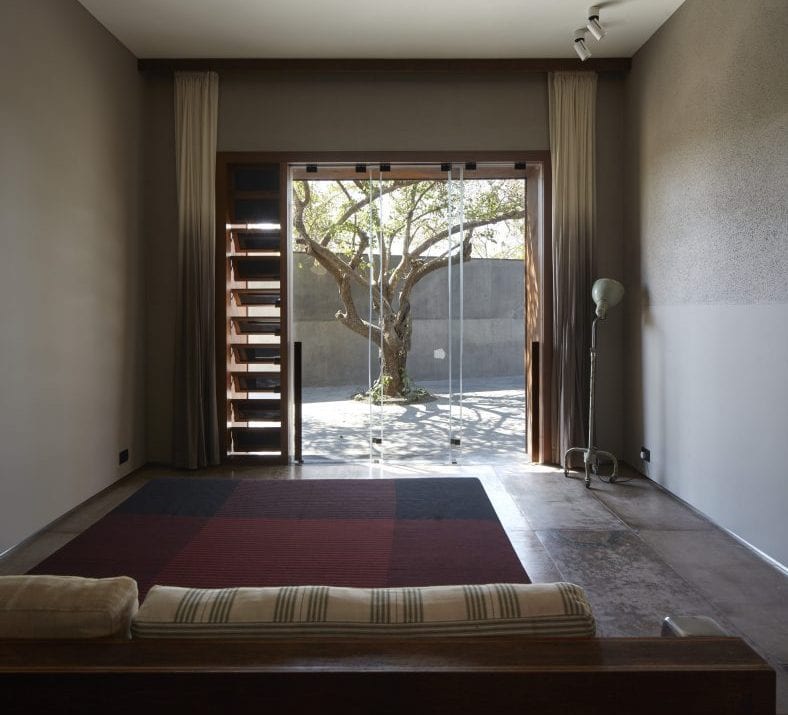 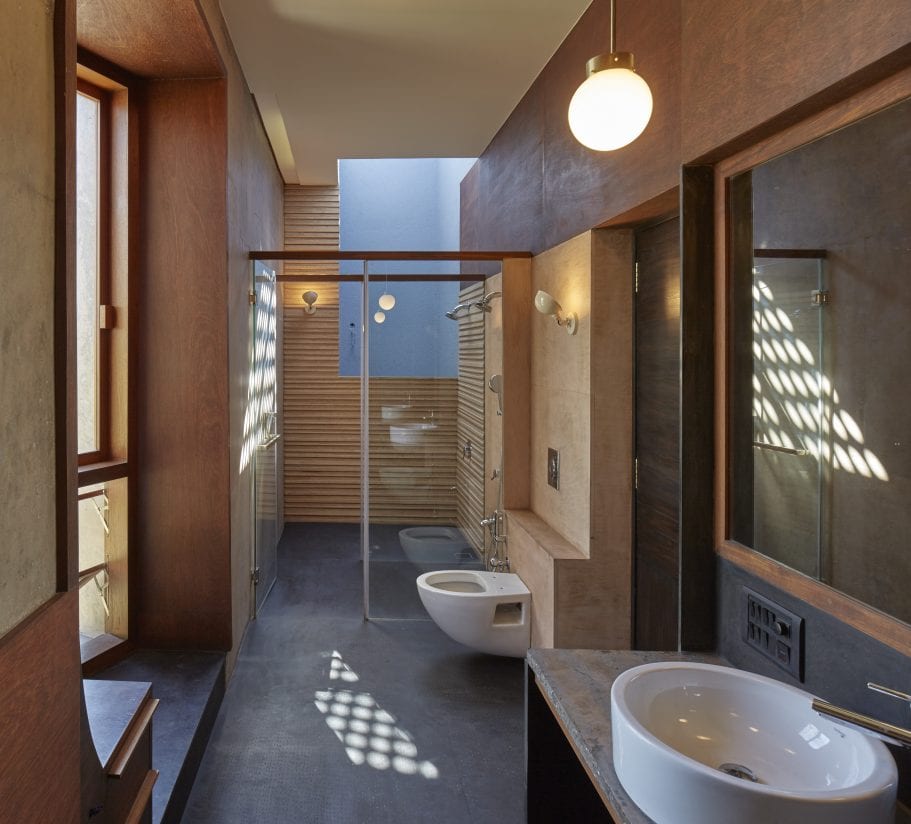 The architecture is crafted as art, where conventional modes of the building are deviated to deride the predictable strict geometries that are attached to impressive architecture. 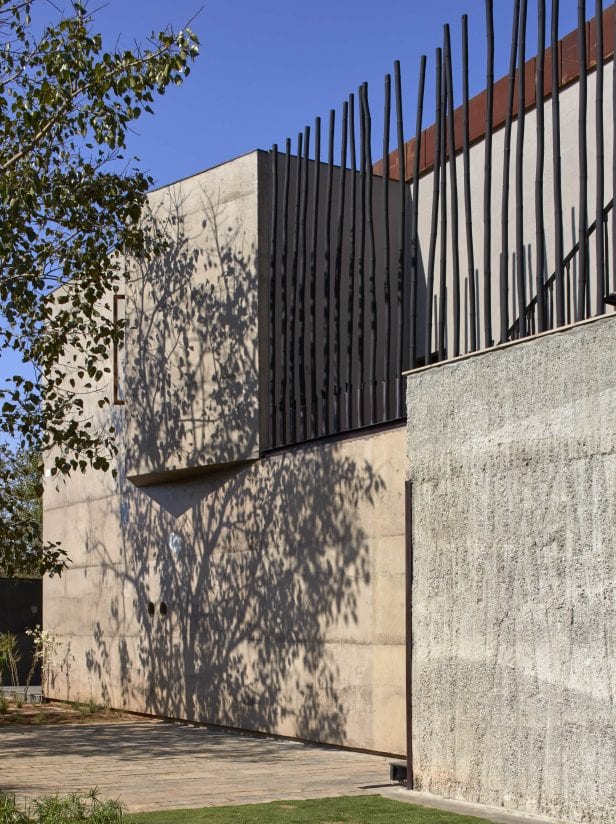 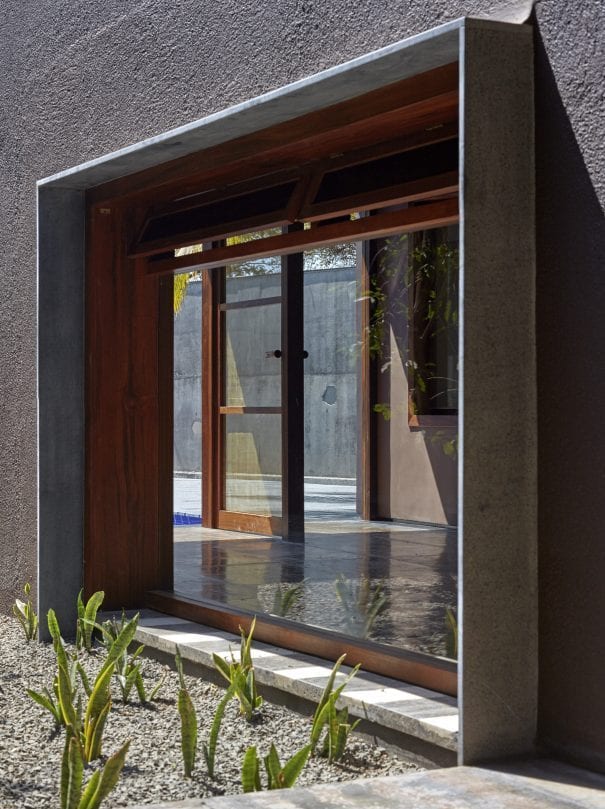 Name of the Project: The Shadow House 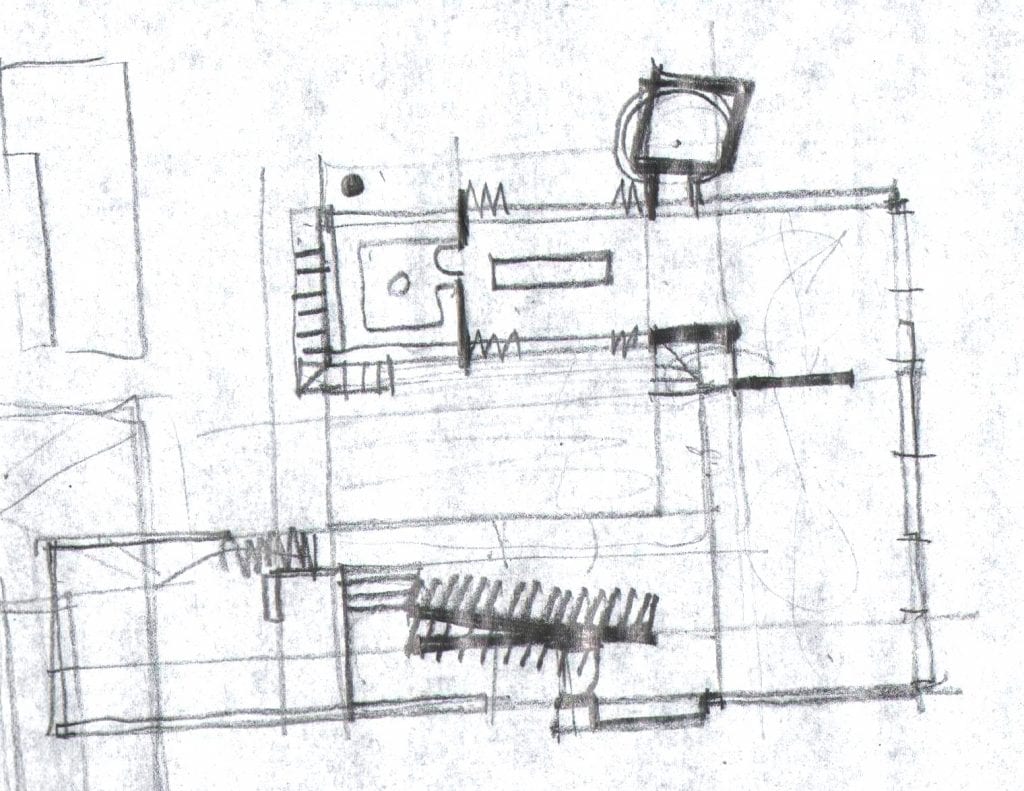 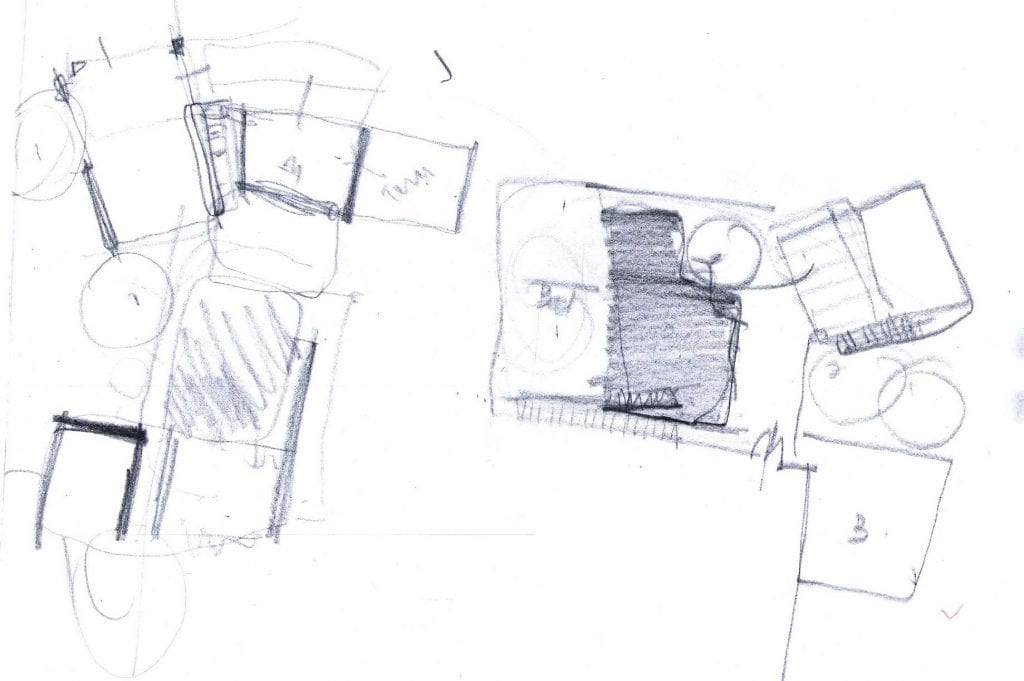 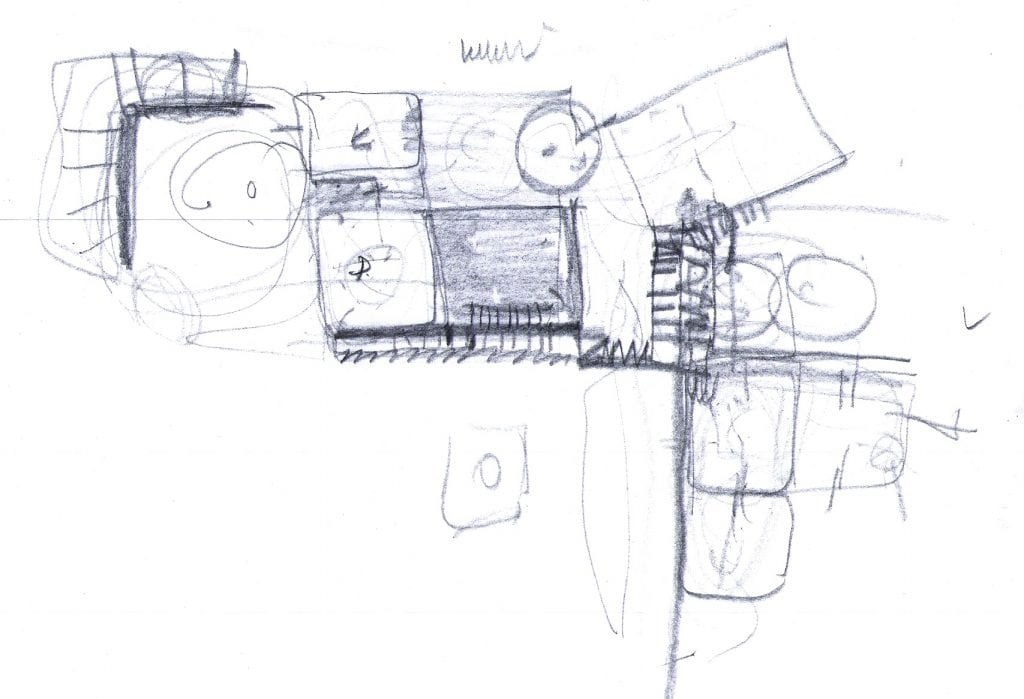 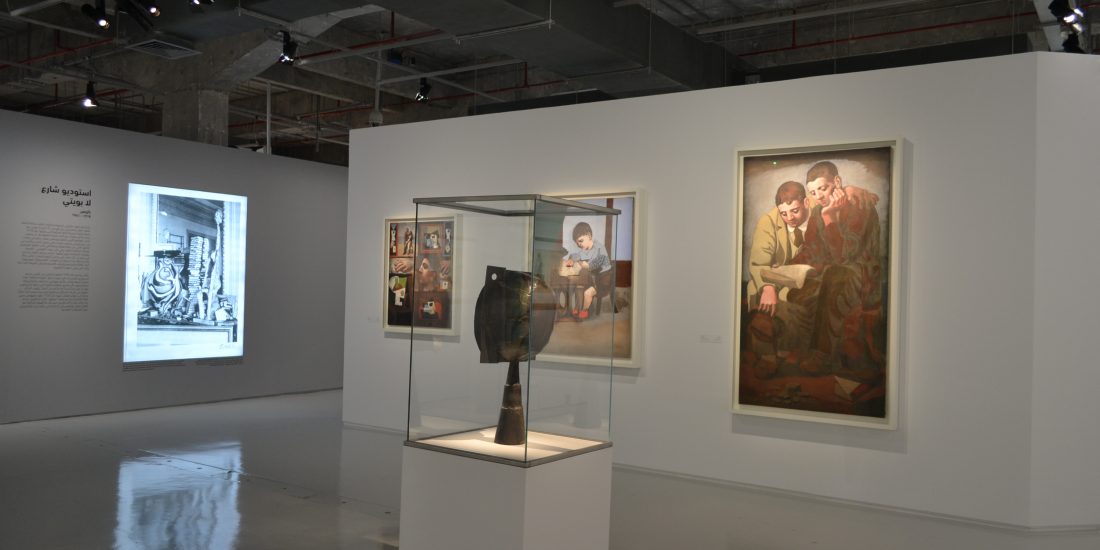