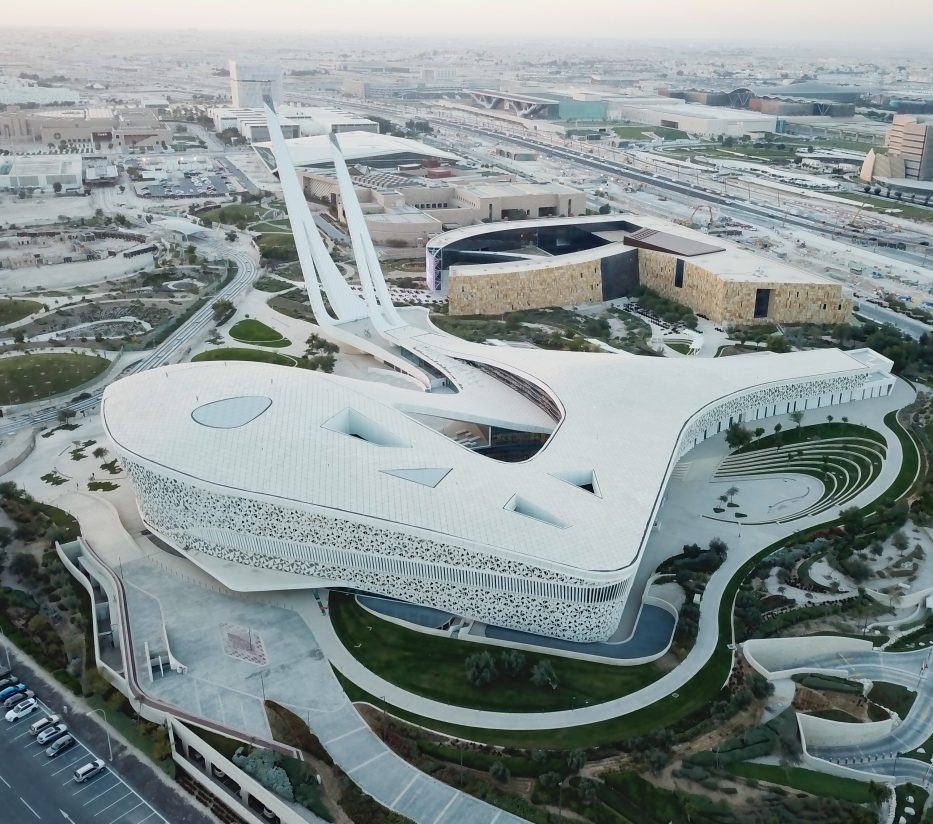 The Qatar Faculty of Islamic Studies and Mosque designed by Architect Ali Mangera is the world’s first contemporary Islamic university which is both an academic and spiritual space. By Aarthi Mohan. 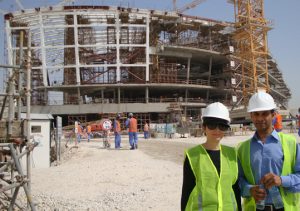 With an innate ability to tell stories, Ali Mangera proves that invention and focus are all you need to create intelligent, inspiring and engaging spaces. The scheme around which the planning of the Qatar Faculty of Islamic Studies and Mosque is based on the Islamic ‘Kulliyya’ or ‘college where all knowledge is sought’. The Kulliyya implies that knowledge and faith are interwoven but that all knowledge ultimately comes from faith. This relationship is explored through the infinite spiral building plan and multiple routes that bind faculty to the mosque.

The plan interprets the Qur’an which is used as the metaphorical basis for the design. The building is set in a four-part Islamic Garden bisected by the four rivers of paradise; a river of honey, water, milk, and wine.  The student entrance is through the ‘five pillars of Islam’ which is a cool undercroft space supporting the mosque above. The pillars are inscribed with Qur´anic verse referring to Hajj, fasting, charity, prayer, and belief.

In designing a building, Ali Mangera follows a very extensive research process. “We research on varied matters such as the urban context, cultural and social dynamics, needs of people in the locality and environmental issues. We also look at how shadows are formed, how light changes color, vibrancy, sounds and texture”, he says.

Ali approaches design with precision and detail. With an overwhelming interest in urbanity, He works to create better urban spaces and ensures people’s happiness in a sustainable context. His fascination for timeless buildings and monuments defines his creative vision. 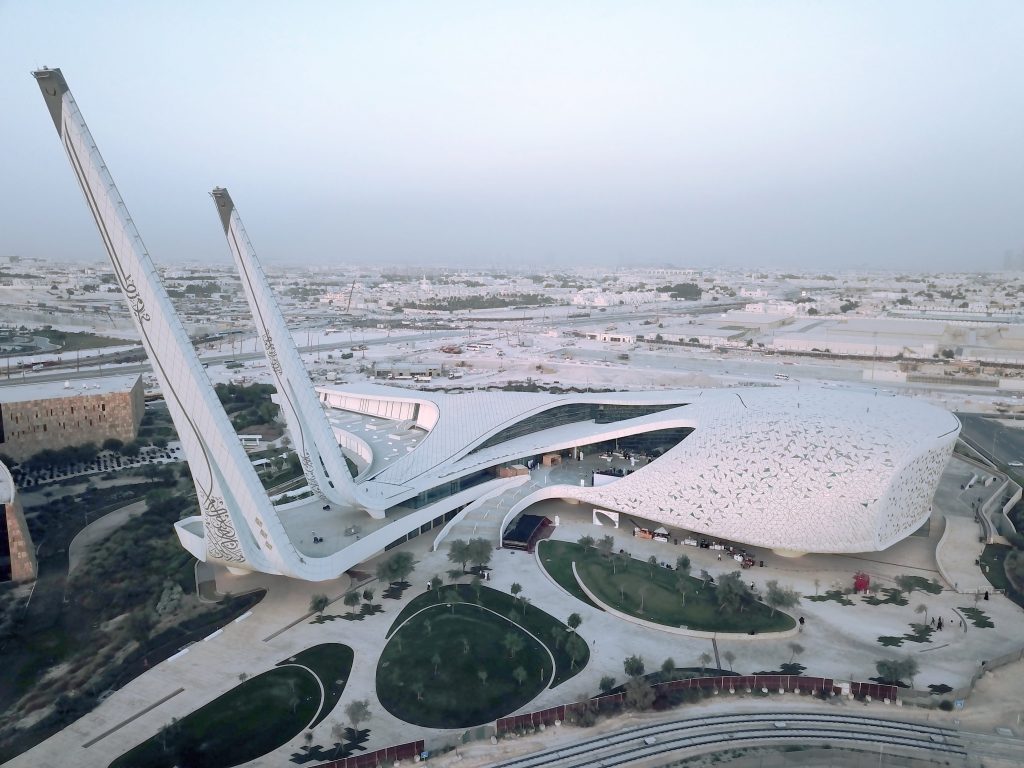 The idea of architecture refers to terrain, topography and urban phenomena as congestion and flow. Mangera describes the period in which we live, as beyond post-modernity. All spaces have cultural influences. Sometimes the cities are unaware of the culture they have or don’t fully appreciate what they have in front of them.

In architecture, the urban design suggests permanence and in the post-modern context, it describes a moment in time. When it comes to the influence of Islamic tradition on contemporary design, Mangera feels that it is an area that requires a lot of attention. The Islamic tradition is often perceived as belonging to the past. “Today the main problem is that Islamic tradition has been reduced to symbols such as the dome, the crescent, and the arch.  Whereas it should capture the ethereal and sensorial qualities of ‘Islamic space’ such as shadow, light, sound, smell, texture, and color. It is about abstraction and providing a solution that is sophisticated and unexpected”, says the architect. 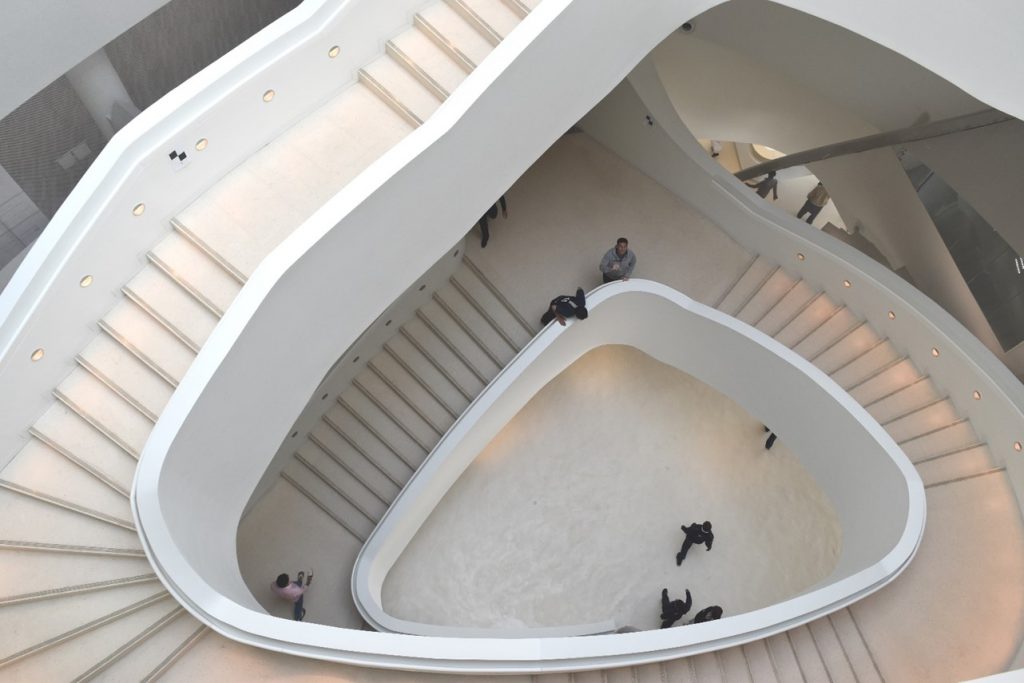 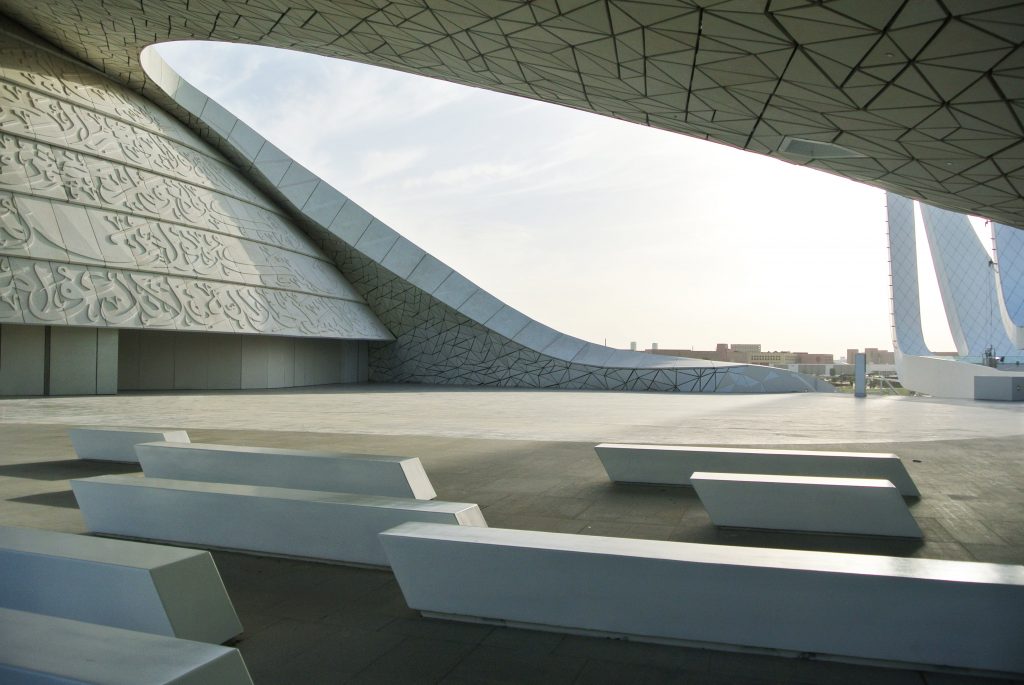 The mosque courtyard at first-floor level is inscribed by Qur’anic verse which leads to the vast prayer hall illuminated by star lights mirroring the constellations. The mosque and faculty are symbolically separated by a five-story ‘ablution cascade’ signifying the threshold to prayer and contemplation. 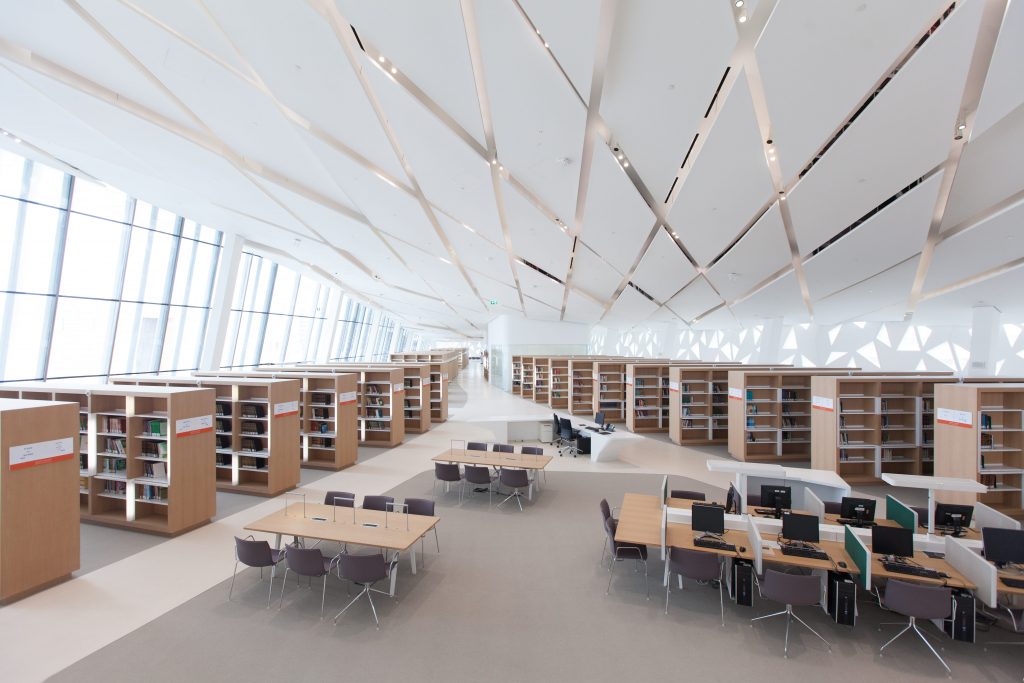 The massing places the large volume of the mosque at one end, with the library, classrooms, and faculty offices in the middle, culminating into two 90m high minarets symbolizing ¨knowledge and enlightenment¨. The minarets provide campus orientation and resonate with the evocative call to prayer.

“Teaching accommodation required in-depth analysis of theological practice. New pedagogies where introduced and the mosque was designed as a community hub rather than a prayer space alone. Teaching areas make use of formal and informal spaces including corridors, lounges, and outdoor learning in the Islamic garden. This informal approach provides ‘innovation space’ for inter-faculty collaboration. Uniquely for the Muslim world, the scheme provides equality for male and female students through co-educational learning,” says Ali.

The scheme meets campus-wide sustainability standards with an active/passive design. The large mosque volume is placed to the south creating shade over the courtyard. Prevailing winds from campus Park are channeled to the building to cool entrances. The faculty and classroom have courtyards for indirect light and ventilation.  The building envelope reduces solar heat whilst permitting natural light particularly in the library area. The west elevation is provided with a two-skin modulated façade that subtly changes as it wraps around the buildings to mitigate solar radiation. High-performance composite GRC panels locally sourced help reduce the C02 construction footprint. 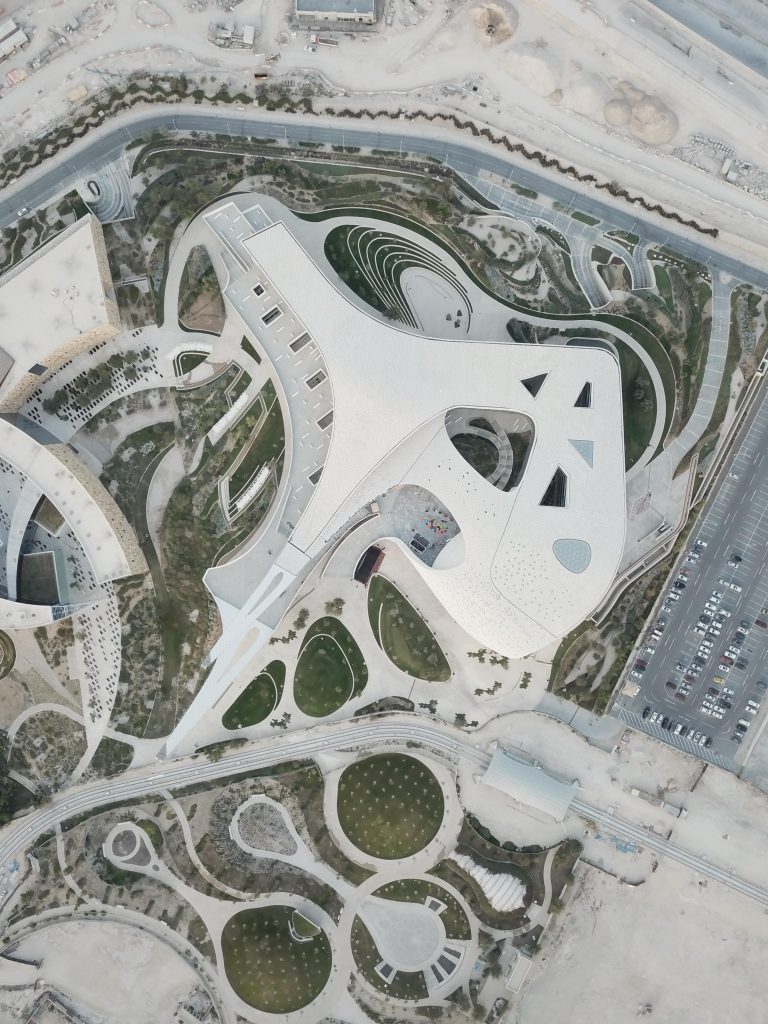 Challenging the often-pejorative view of Islam and symbolically reflecting a high point in Islamic civilization, the project suggests that Islamic architecture and education can be progressive and addresses the needs of contemporary culture where faith and identity are interwoven.

Ali’s work has a personal and powerful emotive quality. “Design projects are bespoke and we want to give the client a part of us. It is like writing a book- there is no point in writing the same thing over and over again. We need to be challenged so we come up with something fresh, interesting and inspiring,” he says. 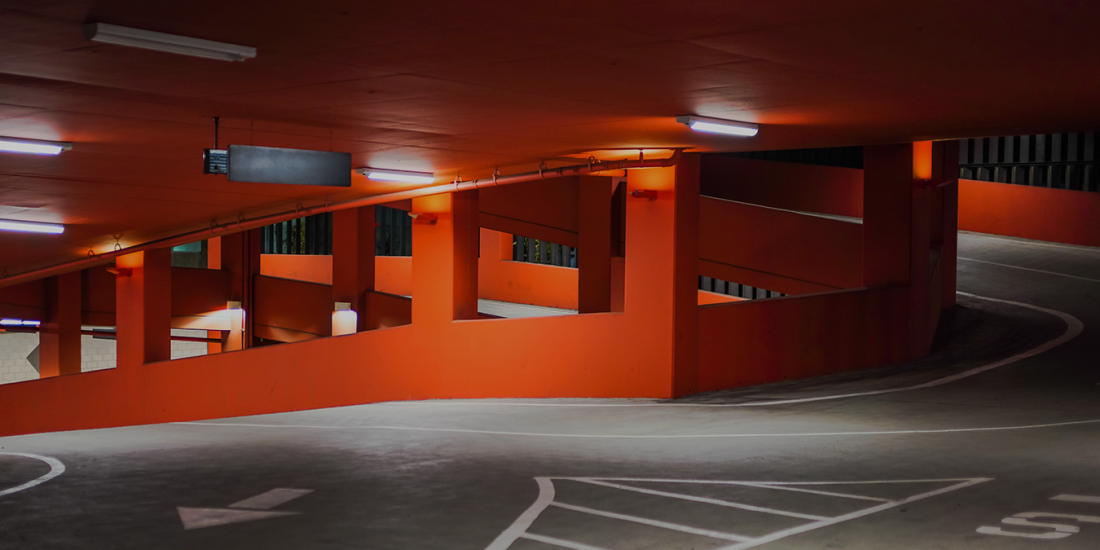 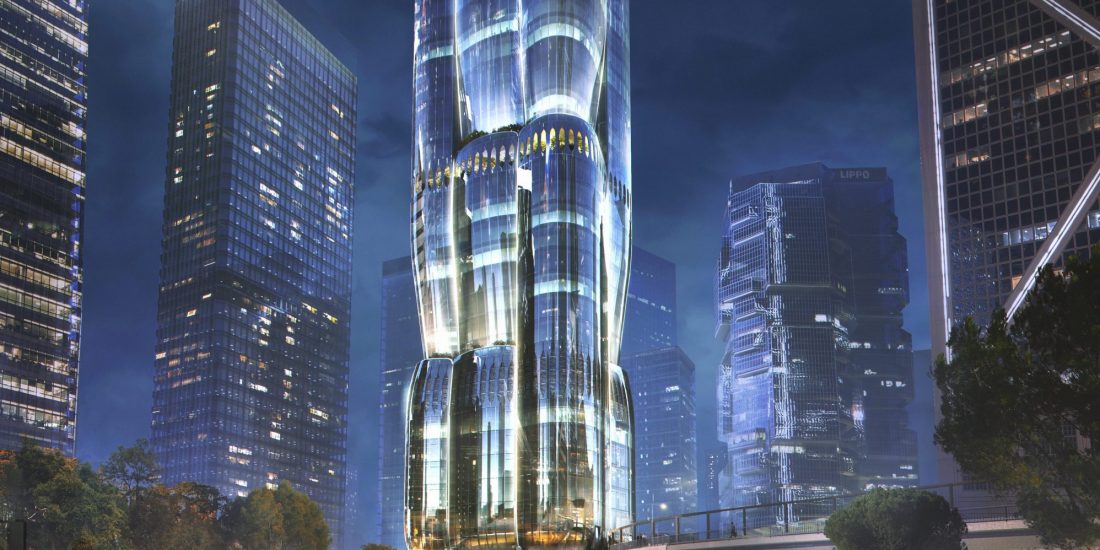 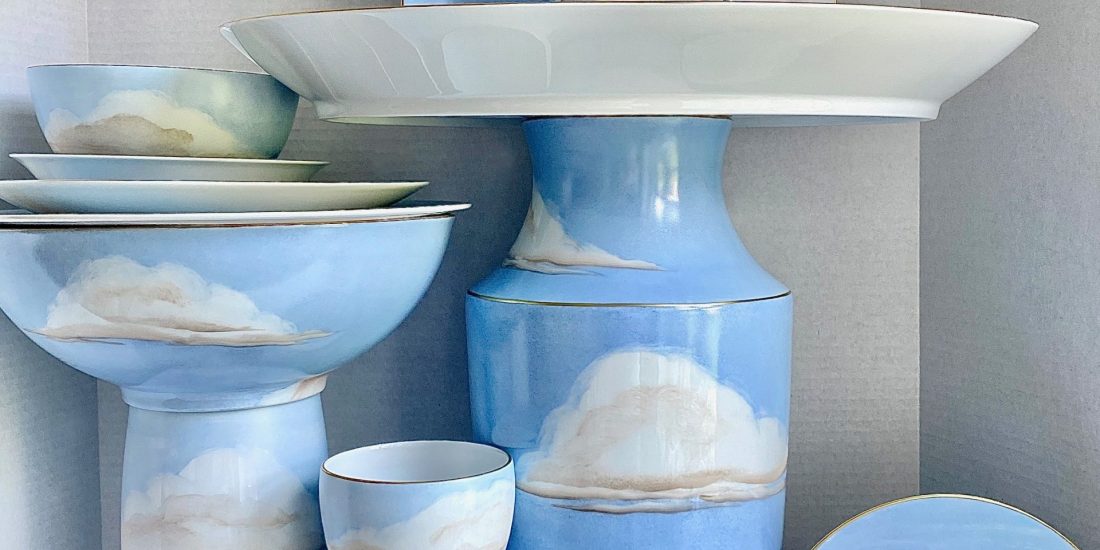