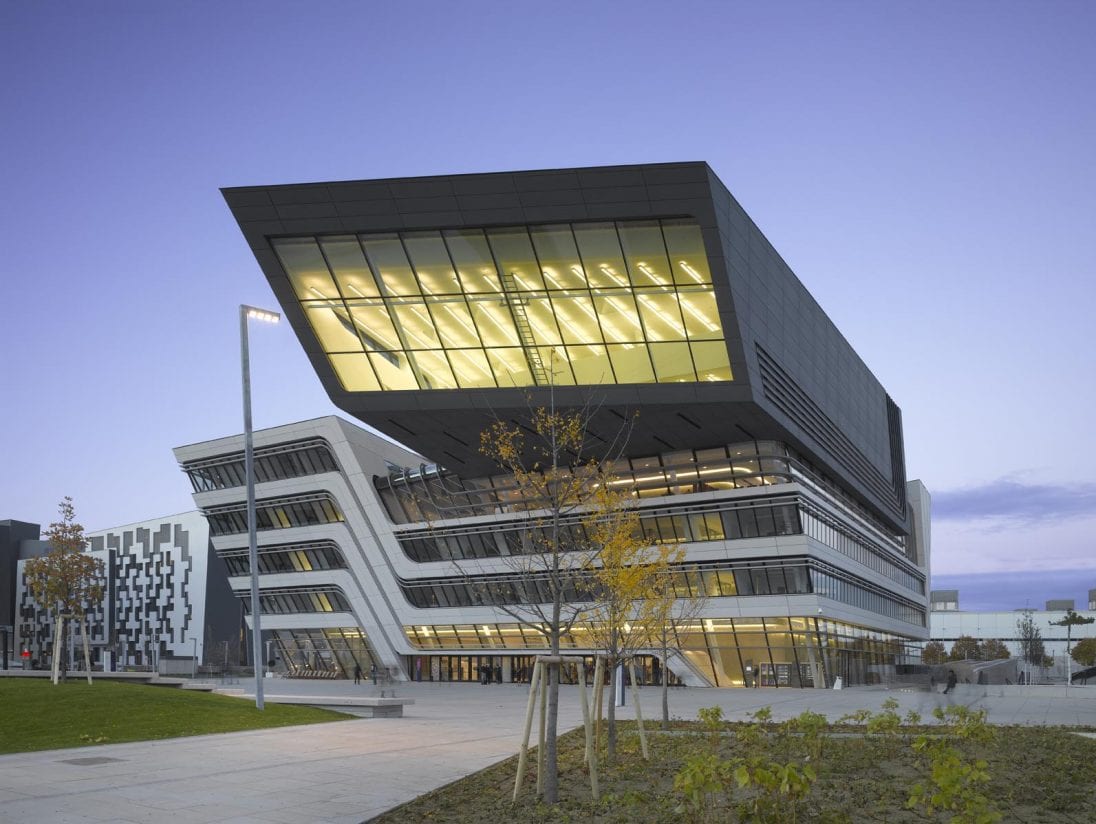 The Vienna of Today, a Masterpiece in Architecture

While Otto Wagner, his buildings and followers, spread the message of modernism in Vienna, the contemporary architecture of the city was crafting a distinct image of skyscrapers and architecture that met the needs of the society. But even if I would call Vienna a modern city, I still carry images of its Gothic architectural brilliance, the perfect measured carvings and gold ornamentations that framed imperial buildings. These ornate buildings took us back in time, and the sense of surreal was aided by the distinct smell of horses that drove the carriages which made their way laden with tourists through the city centre, in Stephansplatz. 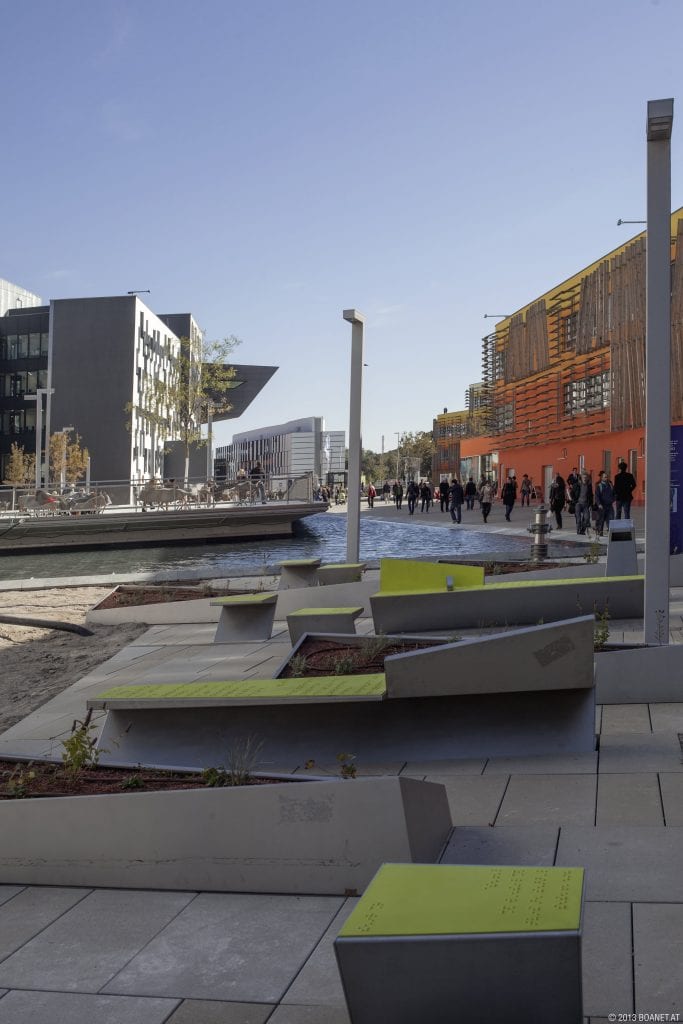 One look at this building and you wonder if it fits into the ‘perfect’ image of the city. A building that is comically in disarray and in distinct contrast to the baroque grandeur, this growing building by Friedensreich Hundertwasser, an Austrian who started out as a painter and moved to architecture by 1950s, leaves us intrigued. 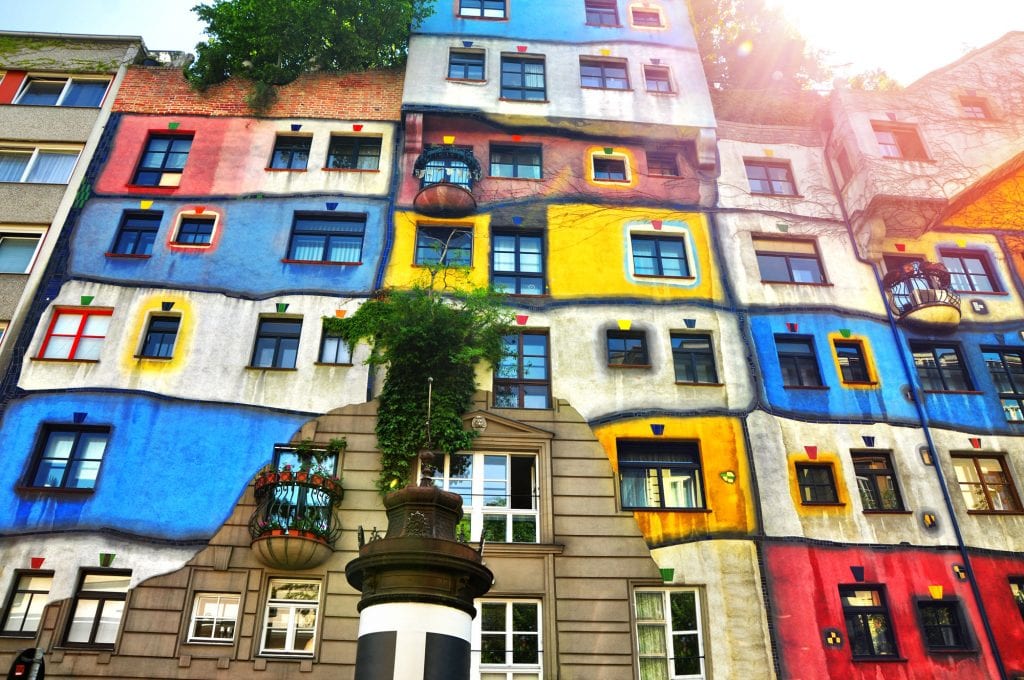 The grass and forest areas of The Hundertwasser House amount to more than 100% of the ground plan.

In 1972, Hundertwasser had his first architectural models made for the Eurovision show, in which he developed new architectural shape. His ideas gave him recognition when in a letter the mayor of Vienna, suggested that Hundertwasser be given the opportunity to realise his ideas in the field of architecture by allowing him to build a housing project. The Hundertwasser House is the result of this endeavour. Hundertwasser succeeded in convincing the City of Vienna of the validity of his concept of a forested roof terrace house. He was helped in his endeavour by architect Joseph Krawina as a co-author.

The Hundertwasser House was completed in three years. The foundation stone was laid on August 16, 1983, and on February 17, 1986, the house was presented to its inhabitants. The house is made of bricks and each flat have a different plan. Many apartments have protruding balconies or pergolas and loggias. A number of the terraces are publicly accessible, others are designated to the flats, and some are reserved for spontaneous vegetation. The grass and forest areas of the house amount to more than 100% of the ground plan. What was taken away from nature by the construction of the building was restored on the roofs. The mosaics on the walls, in the stairways and in the corridors were created by the workers along with the tiles in the kitchens and in the bathrooms, which were laid irregularly to avoid the grid system. It is the first house where the window right is granted to the tenant as a part of the lease agreement. With this house Hundertwasser proved that architecture in harmony with nature is indeed possible within the given construction time, budget and building laws. 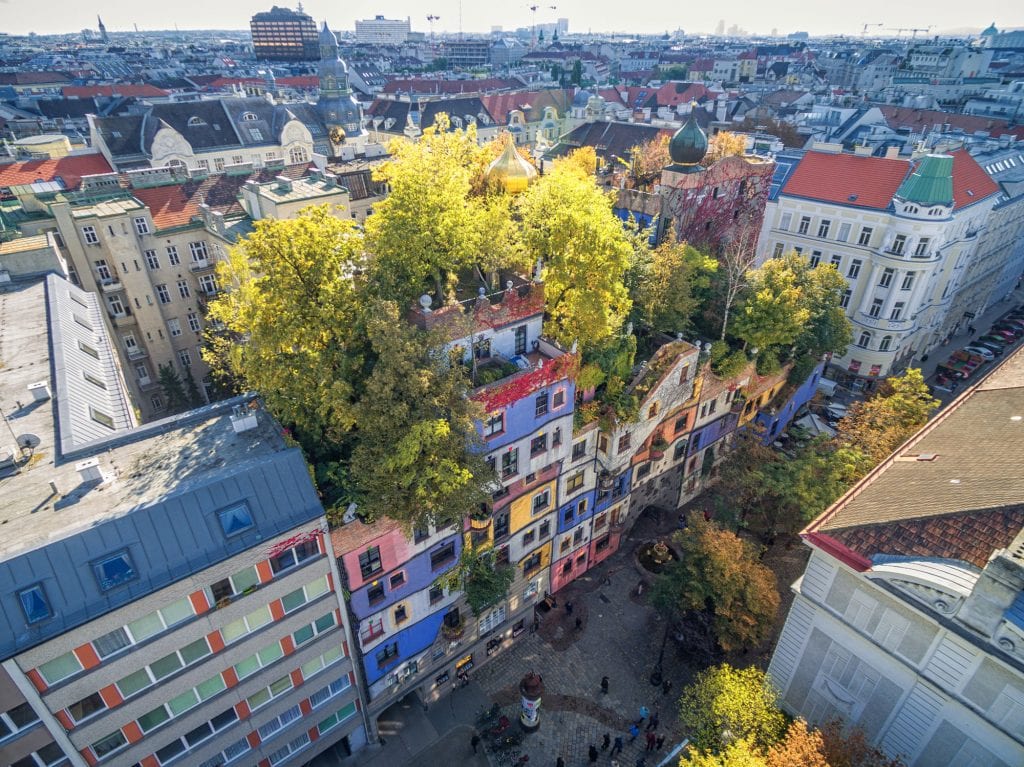 The Hundertwasser House proved that architecture in harmony with nature is possible within the given construction time, budget and building laws.

Though architects themselves have not been great fans of this lopsided, undulating, vine-covered walls, growing roof, sloping floors and its raucous, jumbled exterior, the building has been one of the important structures that throw a light into the city’s diverse and open outlook. The building at its present state is not close to its earlier brilliance and that is exactly how the architect or artist conceived it. The fading away of the building as a testimony of age and time. That the building is now not inhabited by people, makes all this possible. The Hundertwasser Foundation is in charge of maintaining the building – or rather, of not maintaining it.

This building is also a testimony of the fact that while ideals and ideas are to be exploited, they should also be backed by the science of revival and reconstruction to maintain its earlier glory. A building that was made to satisfy the creativity of an artist which also became an architectural marvel to remember Vienna by. But one that architects did not entirely approve of, for the not so liveable conditions.

Prepare to be visually stunned as you enter the premises. This campus is a delight for the senses, as each one of the building will cater to the different design susceptibilities. And this is just as the architects, the master planners, BUSarchitektur, led by Laura P. Spinadel visualised its architecture as, “a subject of collective fashion”. 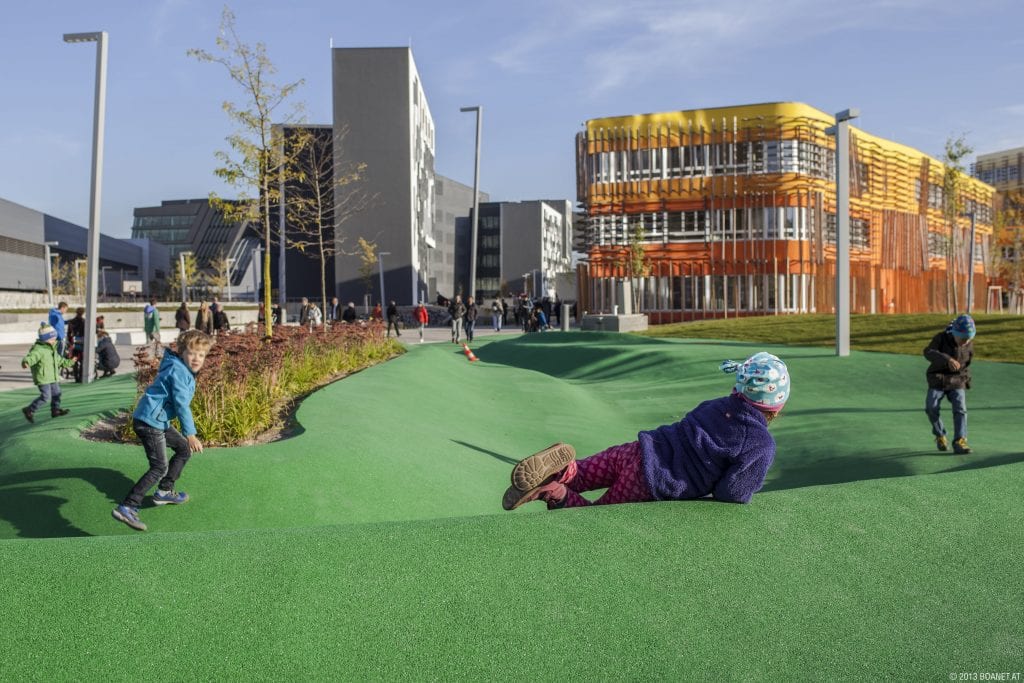 The Campus WU is designed as a “walk along park”.

Campus WU or Vienna University of Economics and Business lies hidden away between the Prater Park and the Vienna Fair, embedded in a city structure with sufficient open space of around 25 acres to develop an urban campus concept. The university complex was designed with an intent to become a landmark, radiating beyond the city limits. 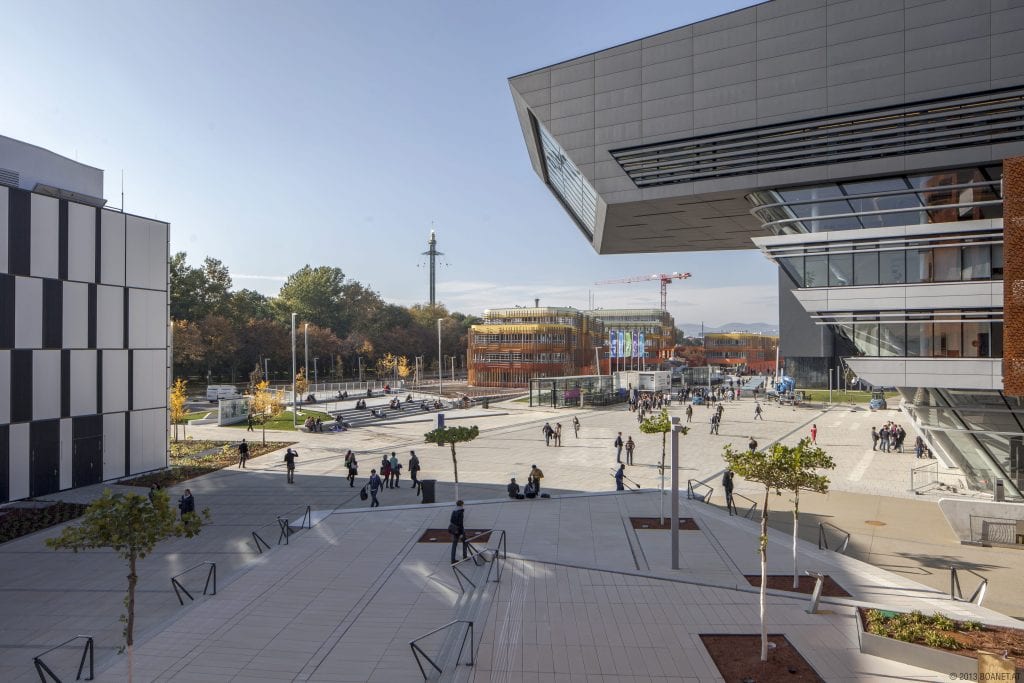 The distinctive black and white horizontal bands on the exteriors of the building by Hitoshi Abe.

A star-studded group of international architects designed six imposing and innovative buildings with spacious open areas, restaurants, and shops, within the complex. The buildings are all very different, but they are united by a common green construction concept, focusing on energy efficiency and sustainability. The buildings intent to showcase what the University is about, embracing the diversity and celebrating it, through buildings, each of them different from the other, every one of them having a distinct flavour of their own while all of them come together through the master plan and space modulation, that makes the entire Campus a place to come back to, not just for the education it offers but also for the environment it projects. 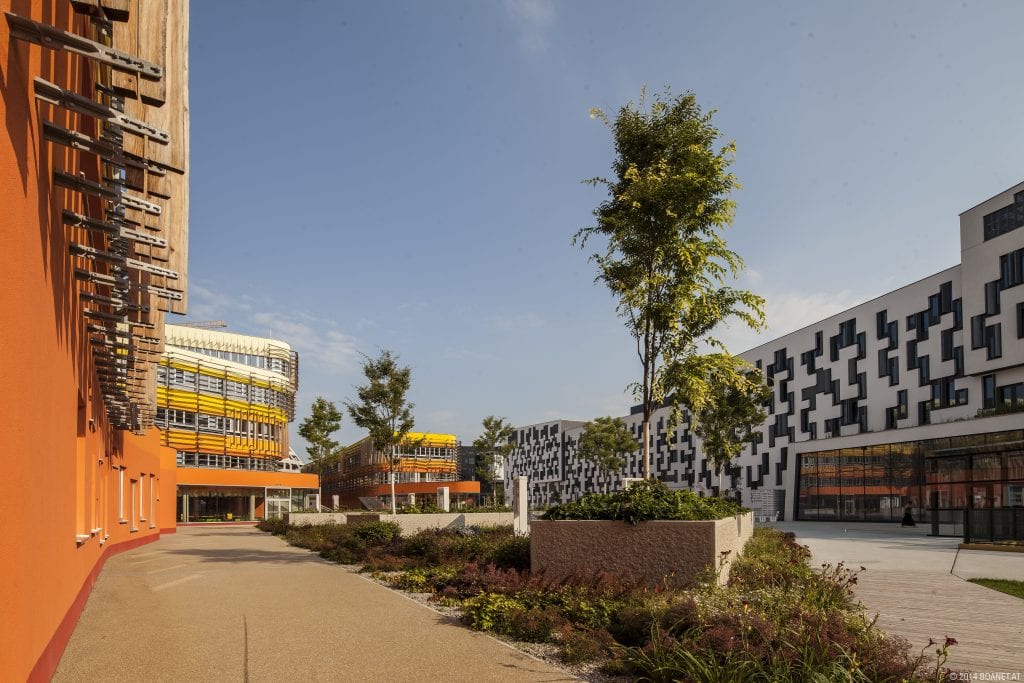 Generous, undulating meeting places are created within this colourful building by CRAB architects

The Campus is designed as a “walk along park” with different stations and interconnected squares from which the specific areas are accessible through green alleys. Designed seating, elevated pathways, landscaped areas and cobbled walkways make and disintegrate areas and gardens as the need may be. 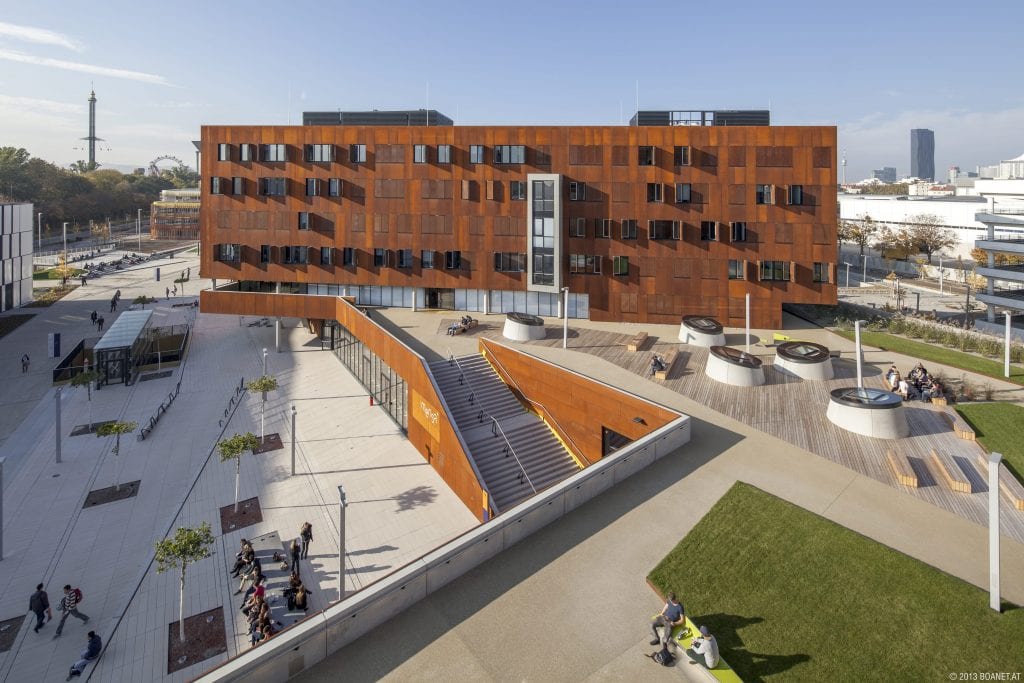 The first building in the complex is the Teaching Centre by the master planner themselves. A copper finish façade that varies from solid walls to grids that can be controlled to allow sunlight within spaces. A geometrically uneven building that arrests the eyes and allows the eyes to rove around its façade to properly encounter the various design features. The architects have chosen to separate the services, like the fire-escape away from the core of the building, and choosing not to enclose it in the rich façade. This helps in reducing the energy consumption while it also adds another facet to the rich exterior.

The interior is a beautiful play of colours and spatial sequences, densification of learning at different levels, either through horizontal spatial movement (Patio plaza – Lounge – roofed urban platform – Food Court), or through a vertical spatial stratification (access staircase to the Departments building – corridors – atrium). 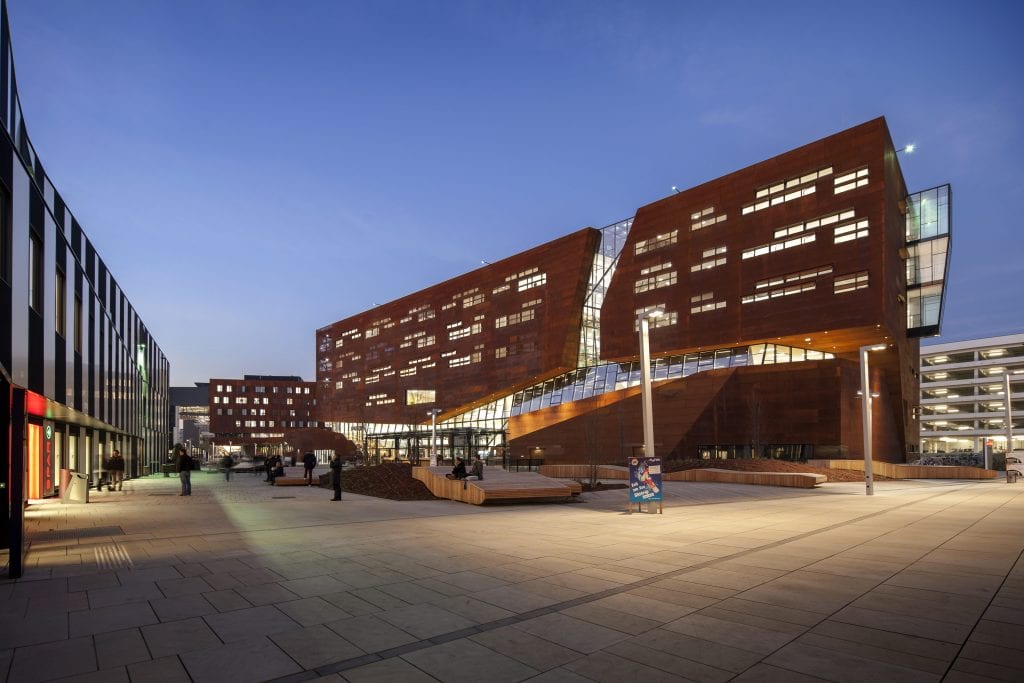 The Teaching Centre has a facade that will age with exposure to time and climate.

Let your eyes slide away from this building to encounter the serene black and white simple structure by Hitoshi Abe. The façade of this building has a distinctive patterning composed of overlapping horizontal bands which alternate between black and white. The size and proportions of windows is also inconsistent, adding to the dynamic qualities of the elevations. 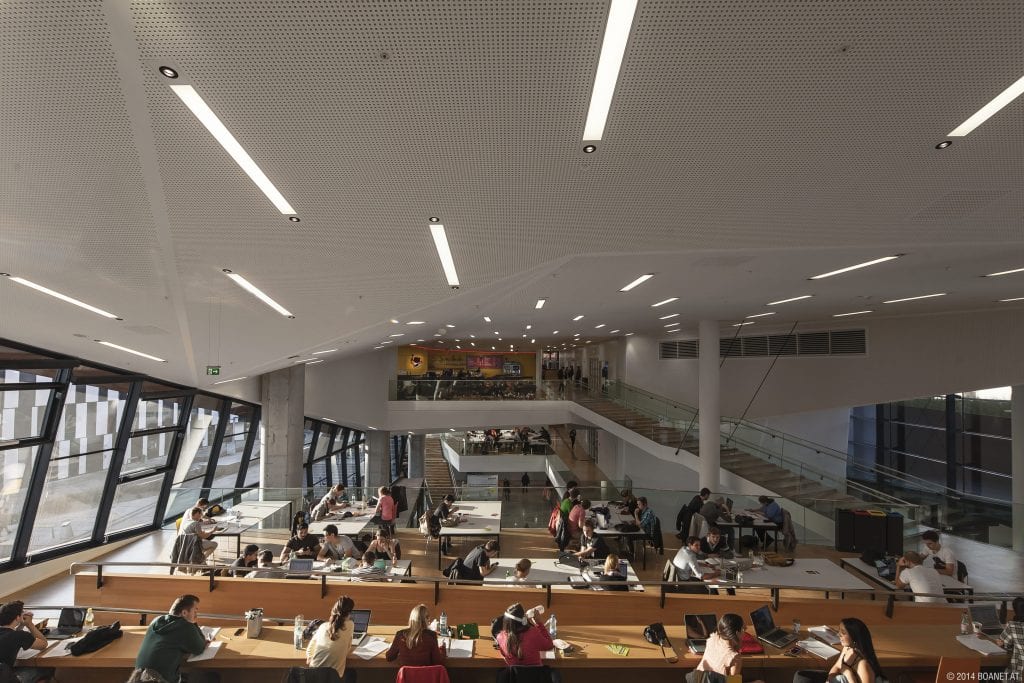 The Teaching Centre by BUSarchitektur has an interior façade that will age with exposure to time. Its interiors are equally fascinating with a beautiful play of colours and spatial sequences, a densification of learning at different levels.

The next stunner is, of course, the Zaha Hadid building which is the Library and the Learning Centre and it rises as a polygonal block from the heart of the campus. The interior of the LLC is guided by the external circulation of the masterplan which maps out the different levels of the building. The straight lines of the building’s exterior separate as they move inward, becoming curvilinear and fluid to generate a free-formed interior canyon that serves as the principal public plaza of the centre, as well as generating corridors and bridges ensuring smooth transitions between different levels. The aim of the functional plan is to clearly define the different areas of the building.  The plan is translated into a three-dimensional object which outlines the space around the central atrium, the corridors, and the canyons. The main block of the building houses the Service Area, the Learning Centre, and the Economics Library, with Student Services and Library Management located in the smaller block. While the interior edges of the site join together in a flowing free-form, the exterior edges of the building are cut sharply and their alignment contrasts with the site edges specified on the master plan and with the position of the adjacent buildings. 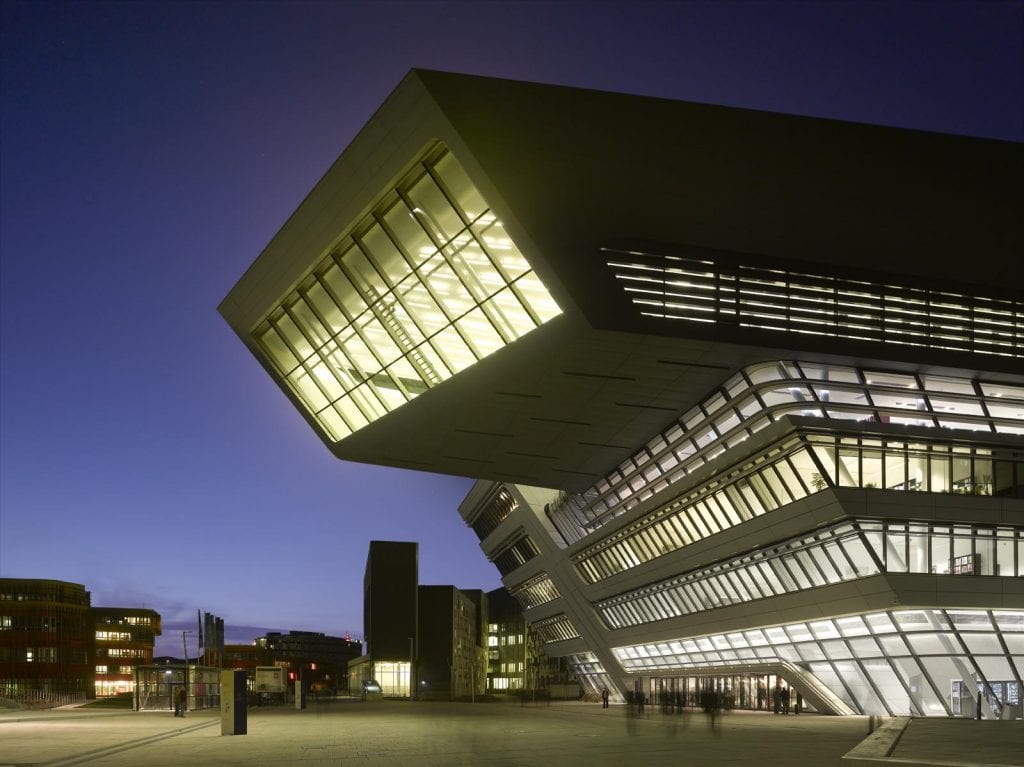 The exterior of the Zaha Hadid building

From the main entrance of the LLC, visitors can walk directly to the central auditorium which also functions as a large atrium flooded by natural light. A system of ramps leads from the auditorium to the library entrance and the central services on the first floor. The security and locker areas are located on the mezzanine below. The external appearance of the LLC is characterised by two elements of contrasting colours separated by a glass joint: shell and shadow.  These different colours facilitate the orientation and understanding of the two primary areas of the building from the exterior. 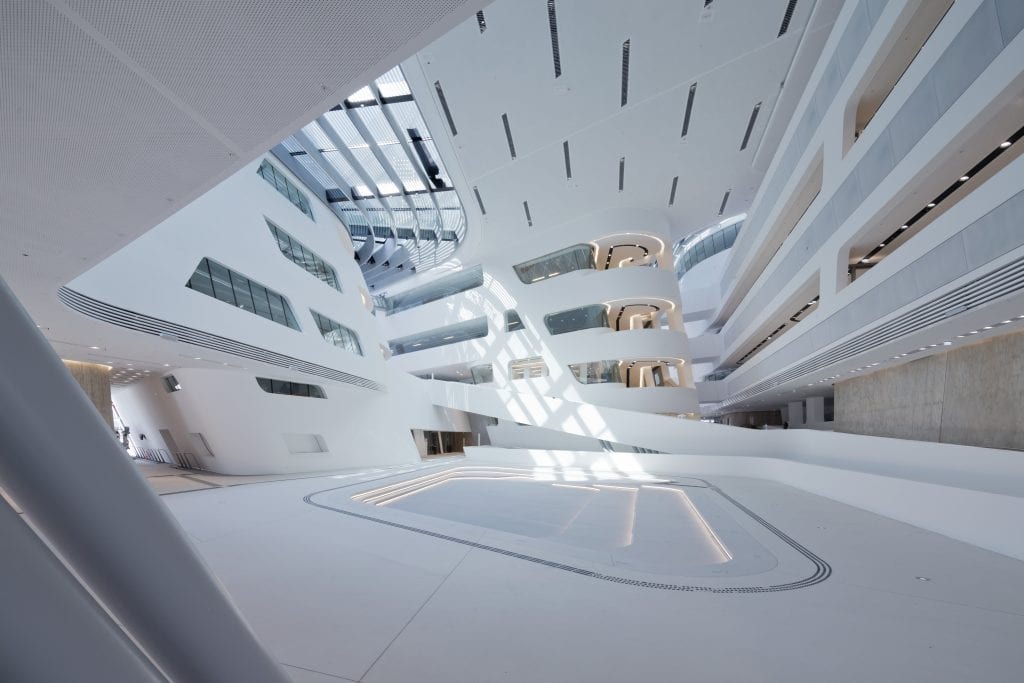 The interiors of the Learning Centre and Library designed by Zaha Hadid.

The next building is a contrast to what is already present. It is a series of terraced garden-decks that form the roof of the Administration building and connect the open spaces of the central court of the University with the Prater Gardens. There are passages under the body of the building that reinforce this connection.

The plan form of the Law building zig-zags in and out and creates ‘sunshine corners’, bringing natural light into the whole building and continuing the relaxed atmosphere of the 200 m long structure. 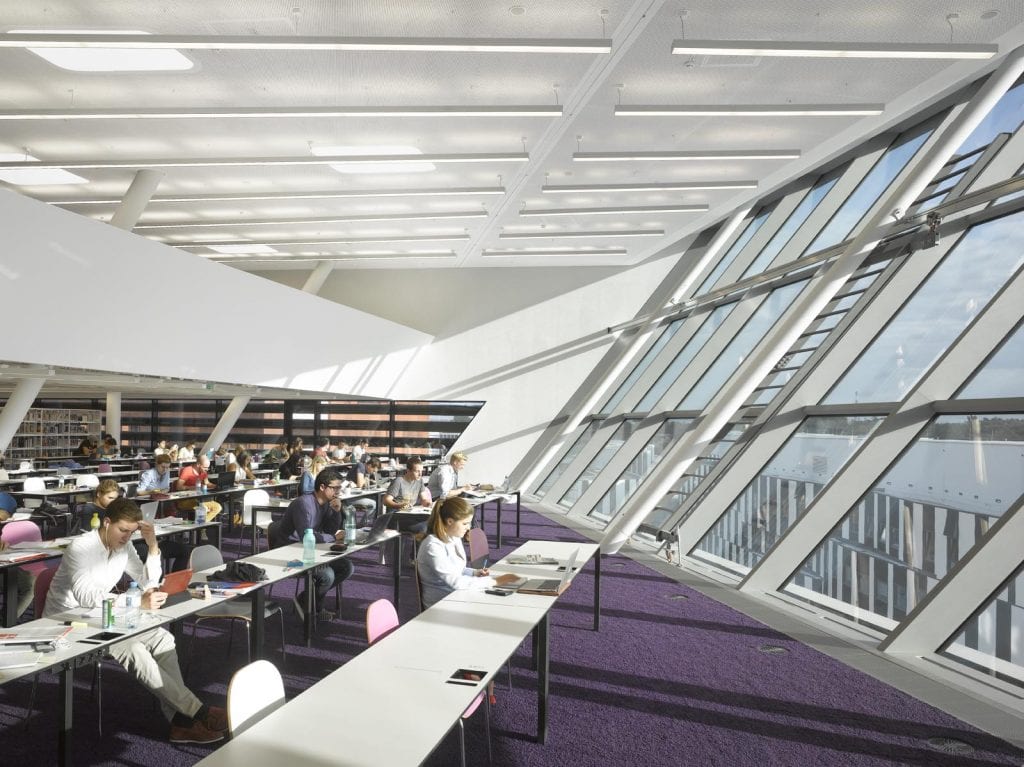 The Library overlooks the Park.

Generous, undulating meeting places are created within and many balconies and terraces throughout, reflecting CRAB’s emphasis on a strong social as well as an academic function.

The bold colour is intended to bring life to the campus and is in deliberate response to the many grey days of a Vienna autumn and winter. 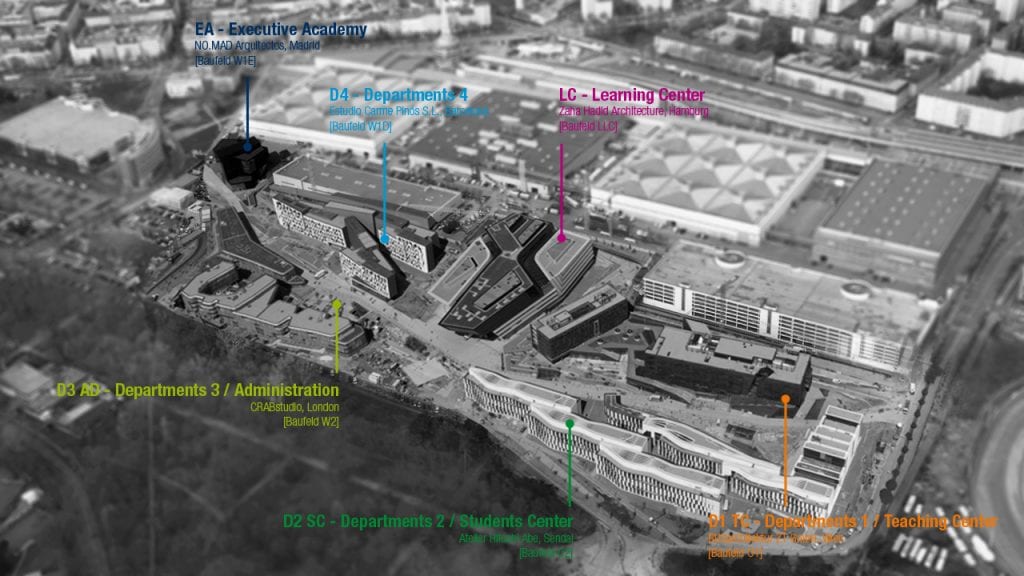 To me, the colours seem to defy the serene nature of the surrounding yet pique interest to keep finding more about this structure. The next building, is the Department Building that is spread out, embracing the topography and is by another woman architect, Carme Pinós.

The last building of the Campus is by NO.MAD Arquitectos/Madrid. 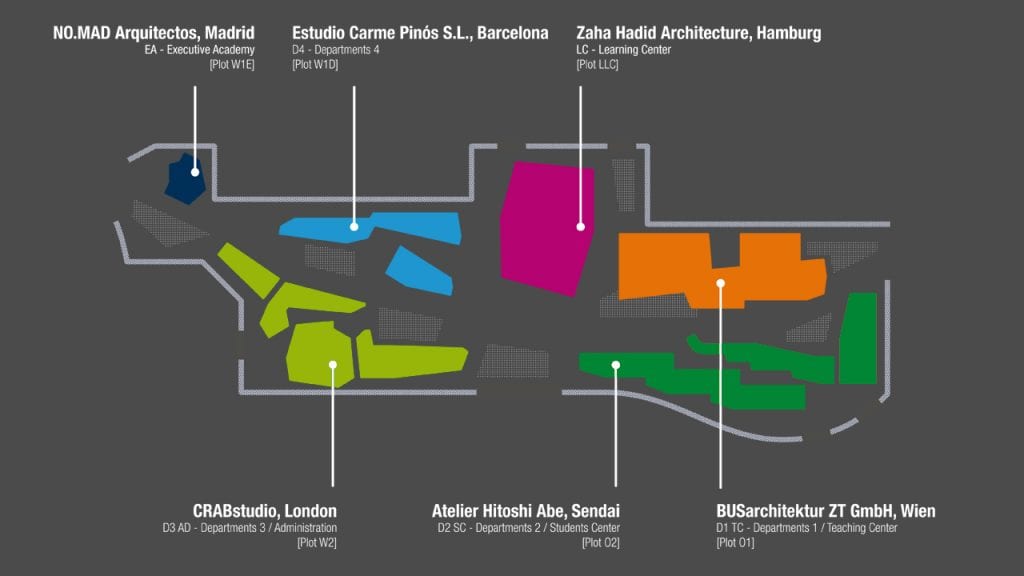 The six buildings within Campus WU, heightens our senses with its display of architectural brilliance, each one of them as if in competition to the other, to flaunt their design intelligence. And after this flagrant display of art excellence, we bow in deference to the country that seems to embrace design diversity.

The article was made possible with the help and guide of Guiding Architects (http://www.guiding-architects.net/), a global network of architects who conduct architecture tours.