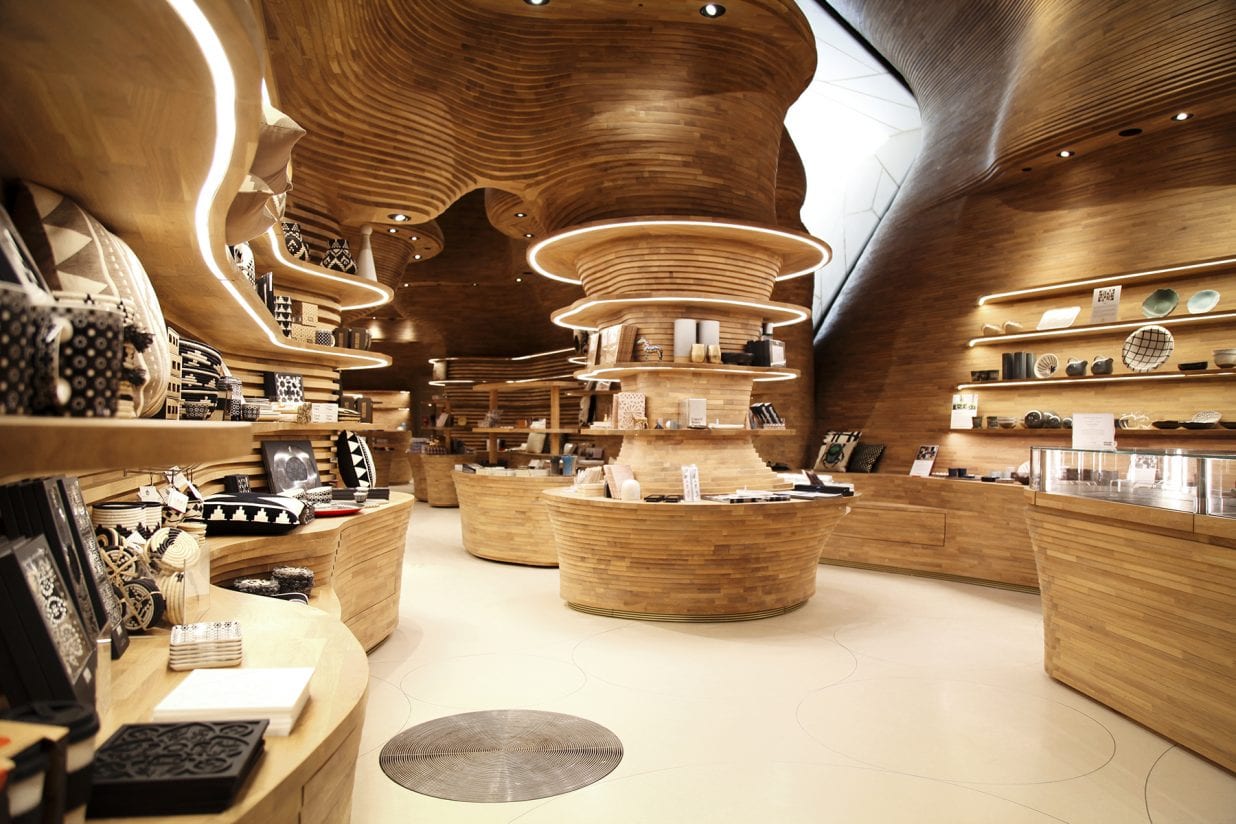 The Wooden Wonder Within the Museum

An Italian Woodwork company known as Devoto Design, guided by the able designs of Koichi Takada made the wonder cave within the National Museum of Qatar a reality. The same interior space is on the longlist for the Dezeen Awards 2019.

The Gift Shop within the National Museum of Qatar is special for more reasons than one. As a constant visitor, I am always at odds to come to the conclusion whether it is the beauty of the interiors or the pull of the merchandise exhibited within that makes me want to keep visiting the NMoQ Gift Shop.

Now, there is another factor that makes the interiors much more special than what it already is. It is the fact that the interior woodwork, executed by Devoto Design, and designed by Koichi Takada Architects, had a three-woman team in charge of the whole process of the woodwork, from inception, marketing to project completion. 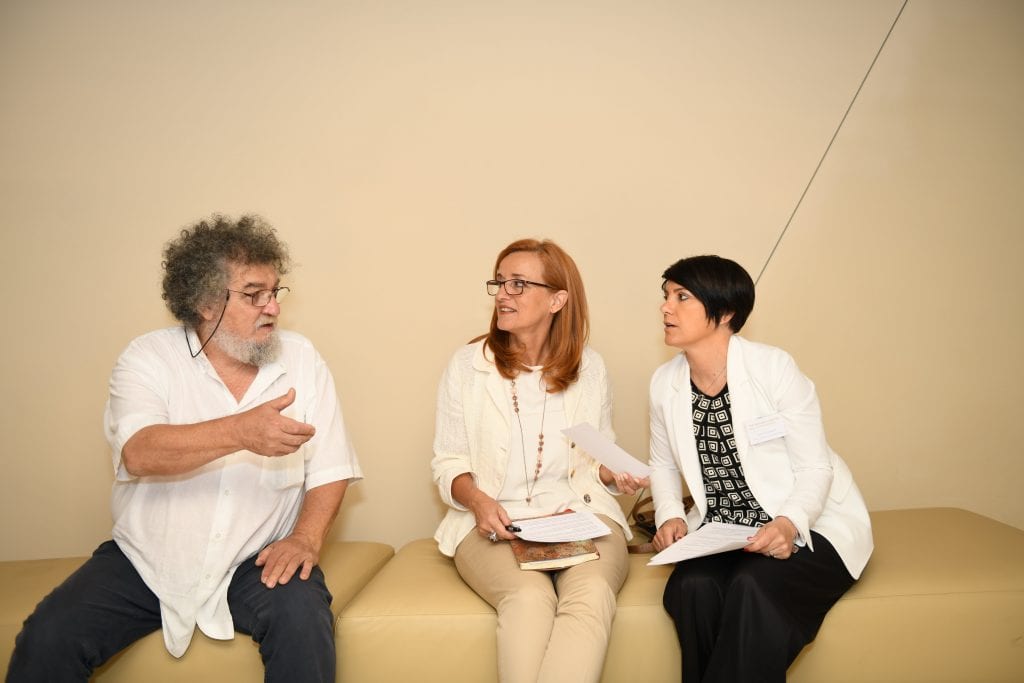 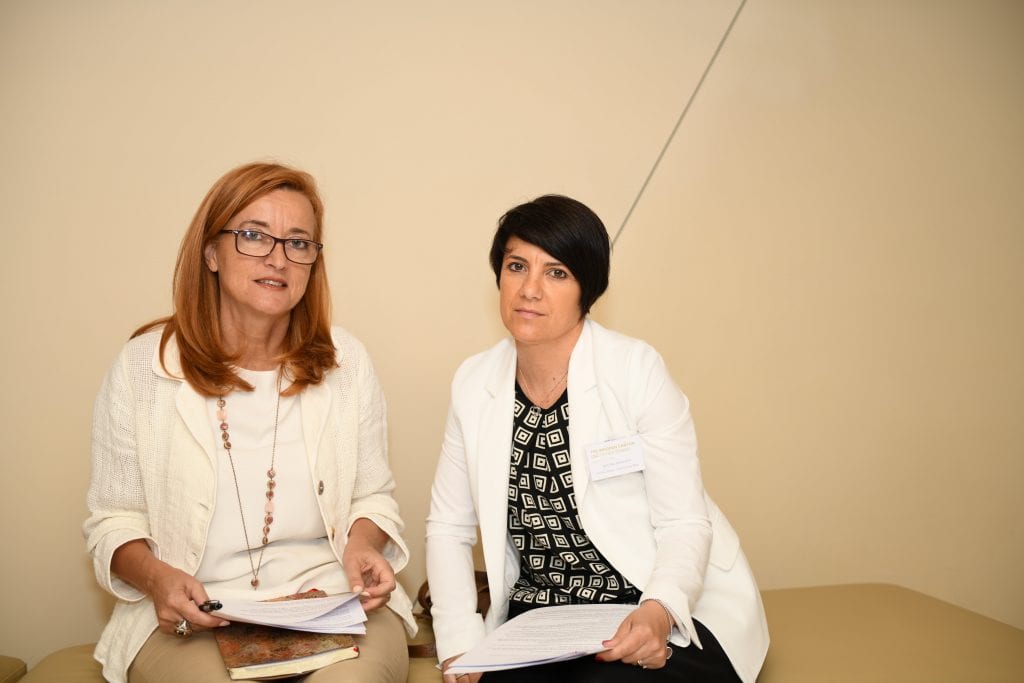 The two women of the team; Laura Bertuccioli and Marina Manfrin, in charge of Sales and Export management at Devoto Design 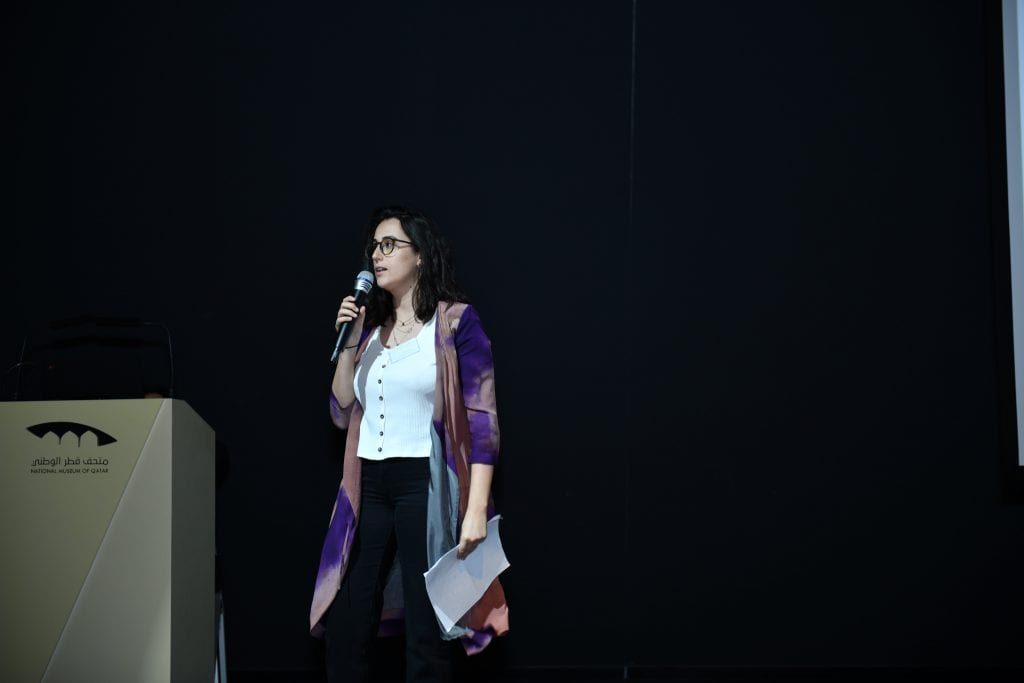 The third woman who was a vital team player, Valentina Vita, Project Manager at Devoto Design

SCALE sat down to talk to the three women, to understand how exciting and intriguing the process of getting the designs to completion was.

Devoto Design is an Interior Contractor Company, brought to Qatar by Obiettivo Qatar, a company that has been a reference point for companies aiming to grow, invest, and build a portfolio in the Middle East. With expertise in Business Development, Laura Bertuccioli, one of the three women involved in the whole process, has over two decades of expertise in connecting people, passions and expertise. “Obiettivo Qatar has contributed to the success of several Italian and European companies, providing support throughout their international business development and connecting their supply of specialised services with the high demand for know-how on the territory,” she says.

The other two women involved in this project are Marina Manfrin, who has been with Devoto Design for 20 years in charge of the Sales Export Management and the young Valentina Vita who is the Project Manager at Devoto Design.

Devoto Design was founded by a passionate artisan, Claudio Devoto, who started off being a carpenter who helped his friends’ carpentry needs and later expanded to a company with more than 40 people. And this year the company completes 40 years of being in the field of delivering exquisite workmanship in wood. 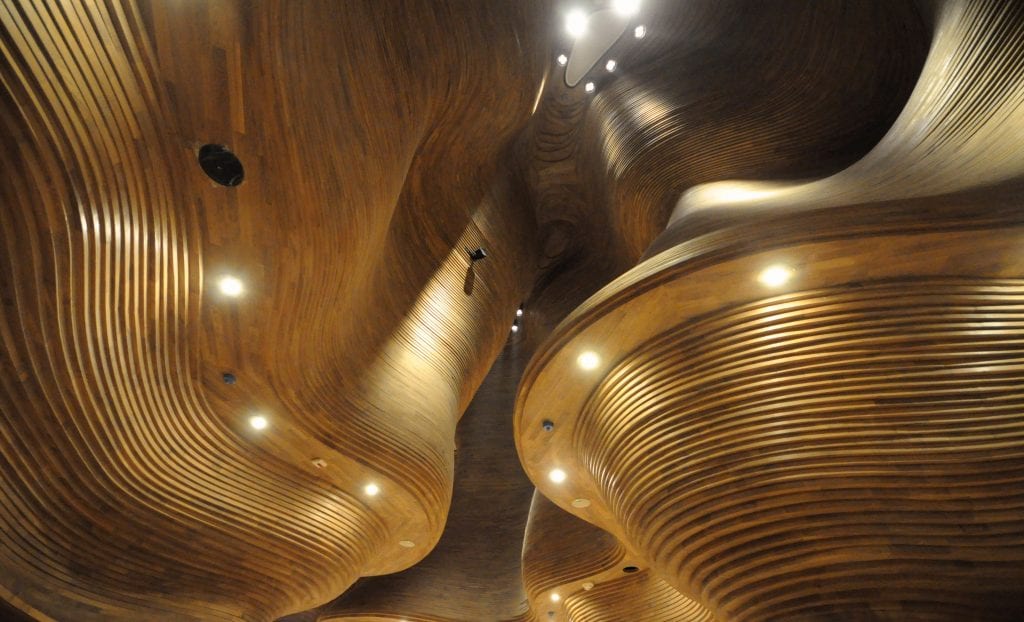 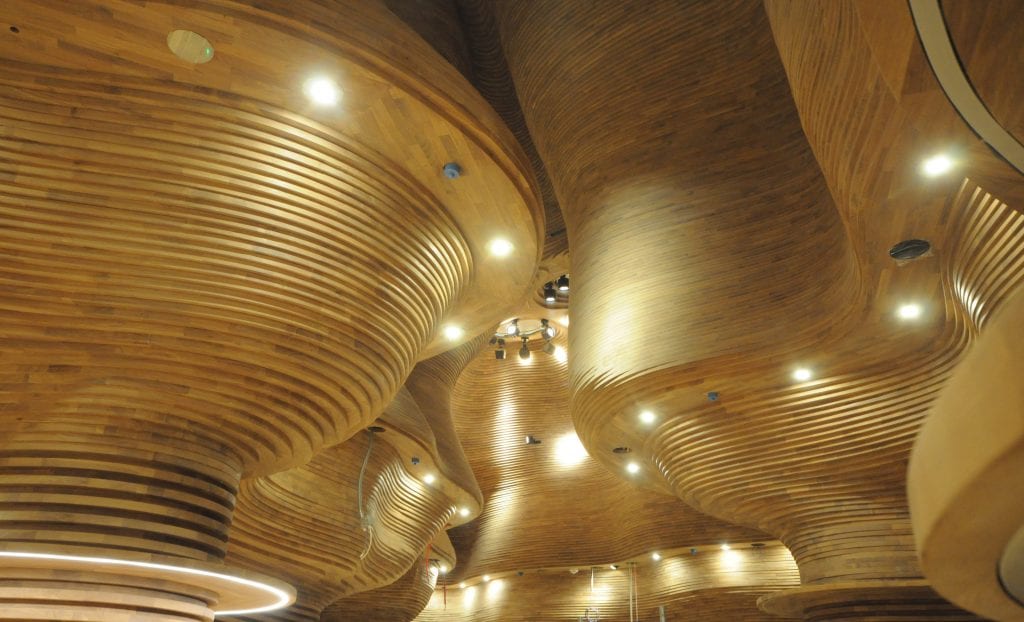 Devoto Design already had a strong portfolio of past works completed. They also had also completed a project in Italy designed by Jean Nouvel, the architect of National Museum of Qatar, this helped the company get a leeway into the Museums projects and they were asked to present a proposal.

There was a first phase of the Museum which Devoto Designs had completed, “which might not be as recognised as the second phase, but which was technically equally demanding,” says Laura, “and this was a package that Jean Nouvel was involved in as it involved the laboratory desks and the information counter as one enters the Museum.”

The Museums Authorities were extremely happy with the timely completion and workmanship of the first phase of the work involved by Devoto and hence they were called to submit a proposal for the second phase of the design.

The timelines for the first phase was spread over a period of close to two years with work awarded at the beginning of 2015 and completed mid of 2017. The second phase with Koichi Takada started in the mid of 2017 with the completion in March 2019. 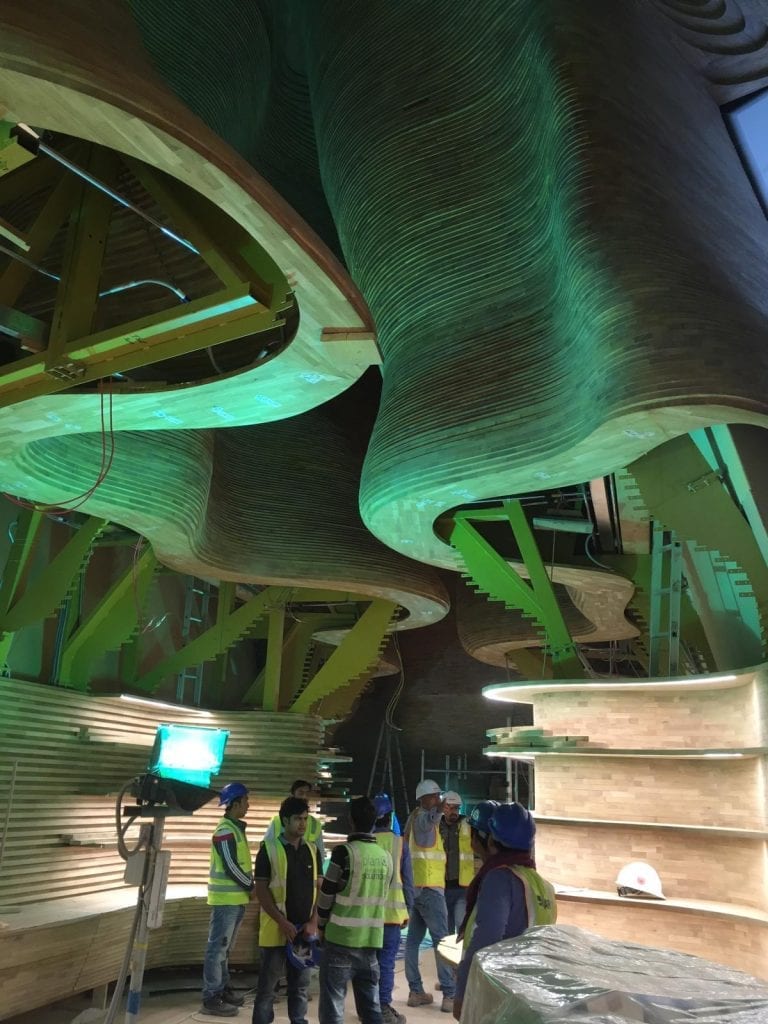 The process of fixing the pieces 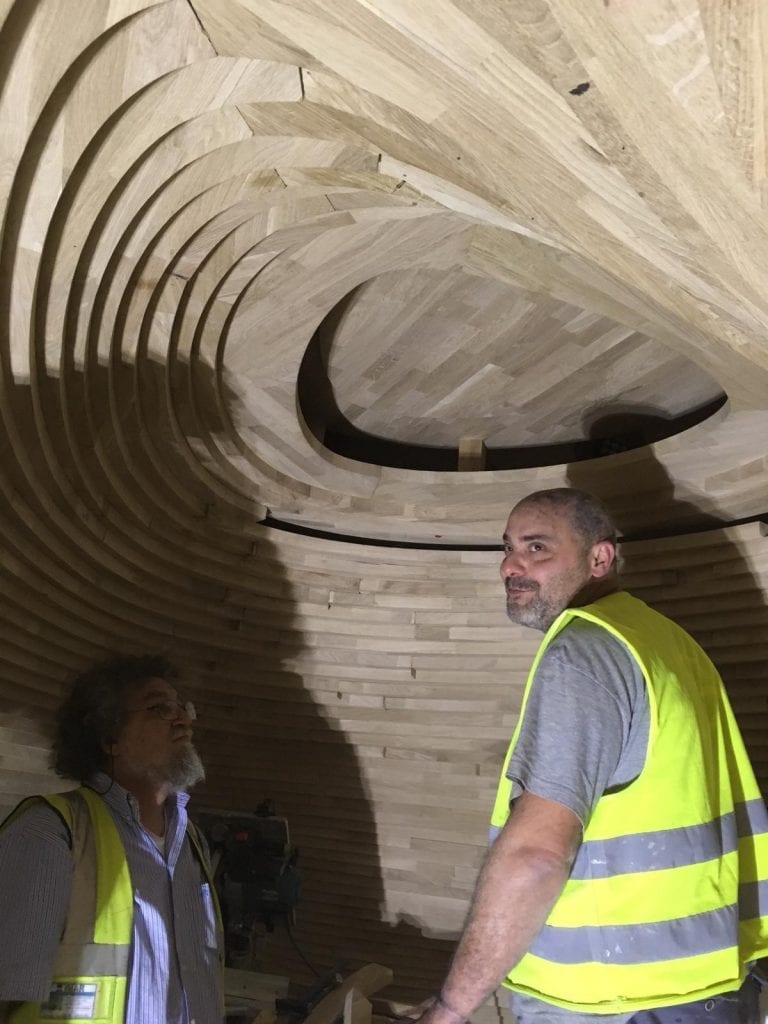 It was a work that involved diligence and precision 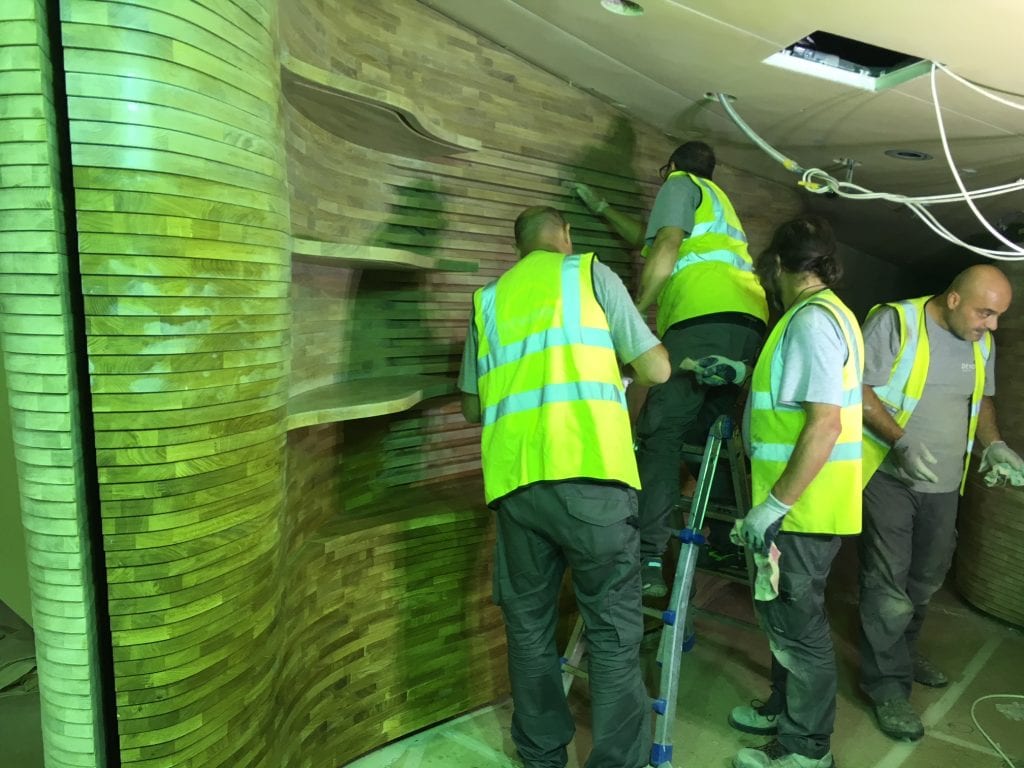 The shelves for the Gift Shop was integrated into the design

“Coordination and cooperation with every single contractor were very much important in this project, as we worked on strict timelines and the completion of the project was dependant on the surface that we needed to start our work with,” says Marina.

“We knew that what we had to create was not just a wooden cladding but an atmosphere,” puts in Marina, “Understanding and working with this approach made it easy for Koichi to communicate with us and for us to understand all that he needed. We are used to delivering such impressions or ideas that exist in the designers’ creative minds and hence we were able to work seamlessly with Koichi Takada and his team.” 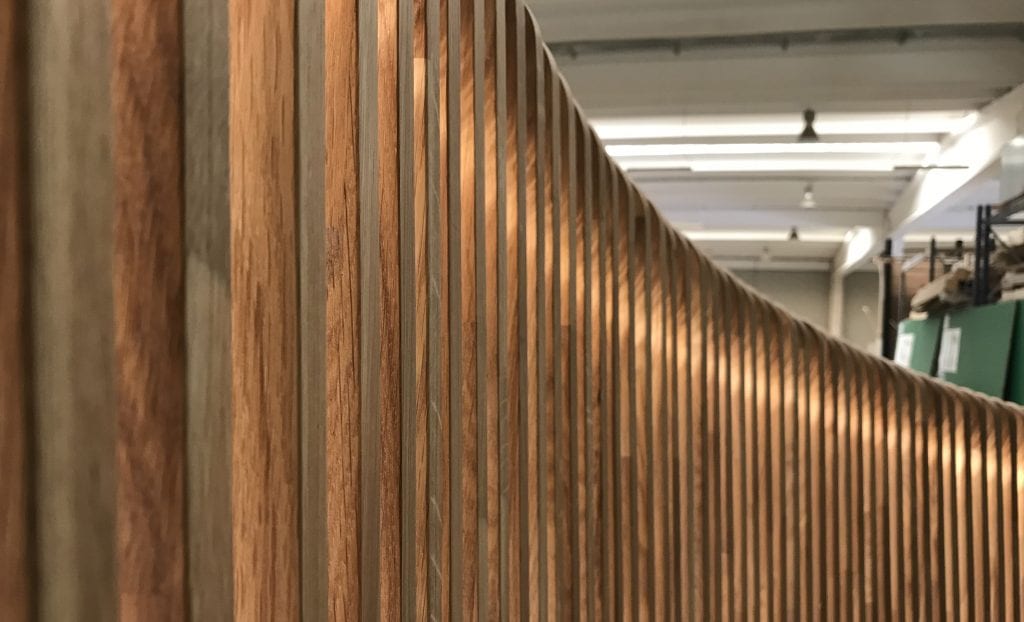 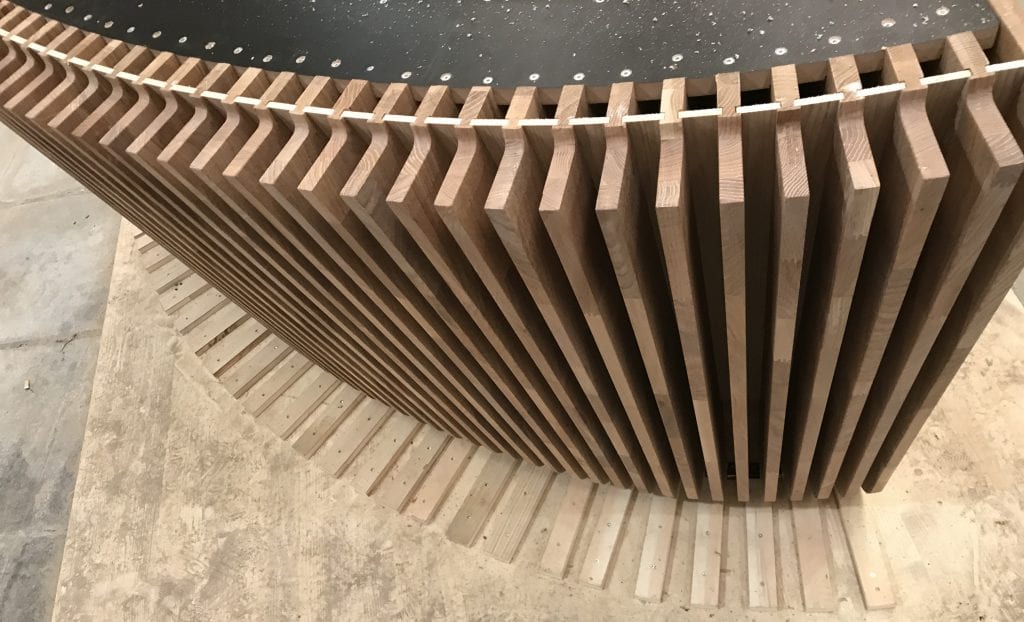 Valentina Vita, a young lady architect with Devoto was the one in charge at the site with Claudio Devoto. She remembers her initial fears and astonishment when she saw the design, “When I was shown the drawings and rendering of the project, I said to myself:

“It was a great experience,” she recounts, “Not just the technical aspect of the design but also the social aspect of the work. The coming together of so many experts from different countries, the understanding and the respect that we all had towards each other, all of this together made this project much more than just the delivery of technical expertise in design.”

But Valentina did have her hiccups, initially. “I was so young, and I was also a woman. It was not so easy to garner respect and to establish authority. We were working with workmen from local joineries and everything from the working days to the weather, was so different from what I was used to in Italy.” But eventually in the face of her technical expertise, Valentina soon established authority and support from the entire team which made work much easier going ahead. 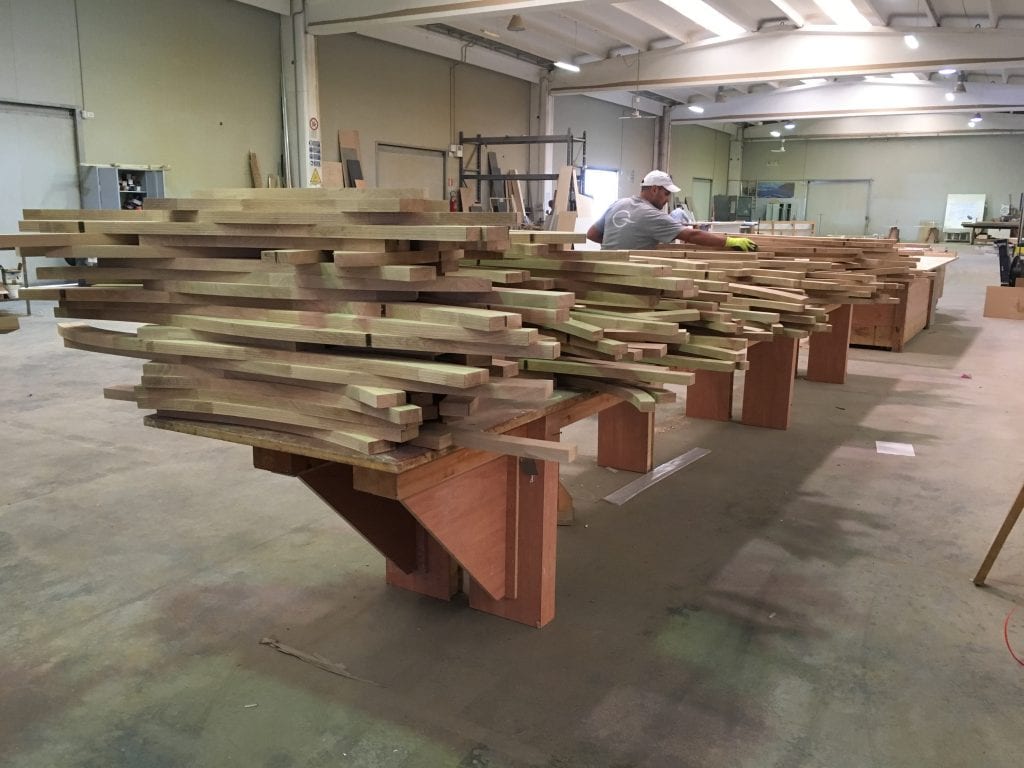 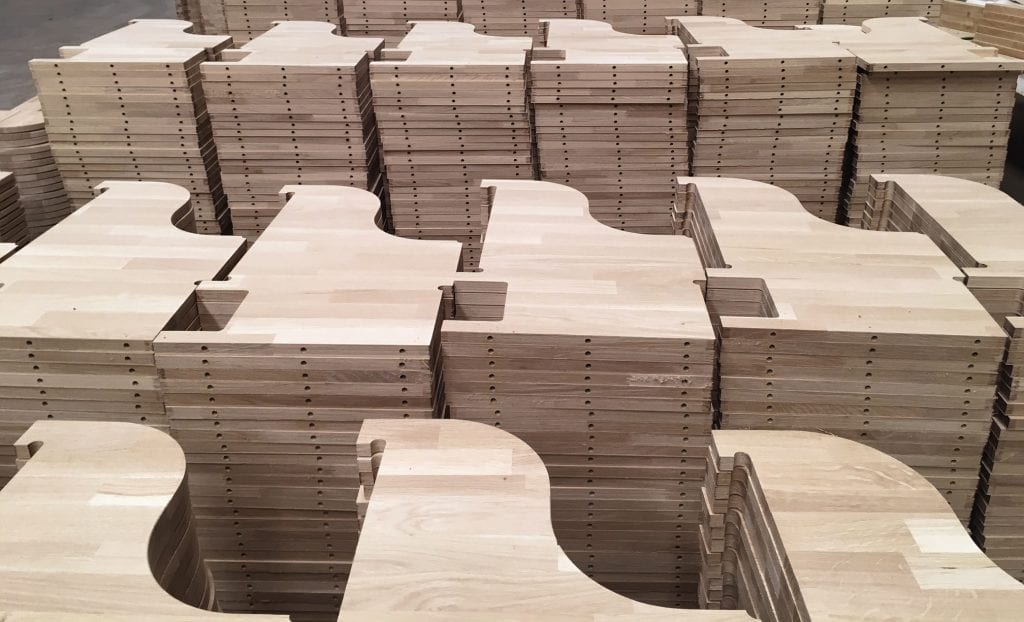 Each of the pieces was named and tabulated corresponding to the place, point and room they were used in

“Local support was essential: without the help and support of local joiners we would have never delivered the works in time,” she stresses.

But the work ahead was not so simple. The woodwork was almost like putting a wooden puzzle in 3D together and one that had tens of thousands of pieces to it. 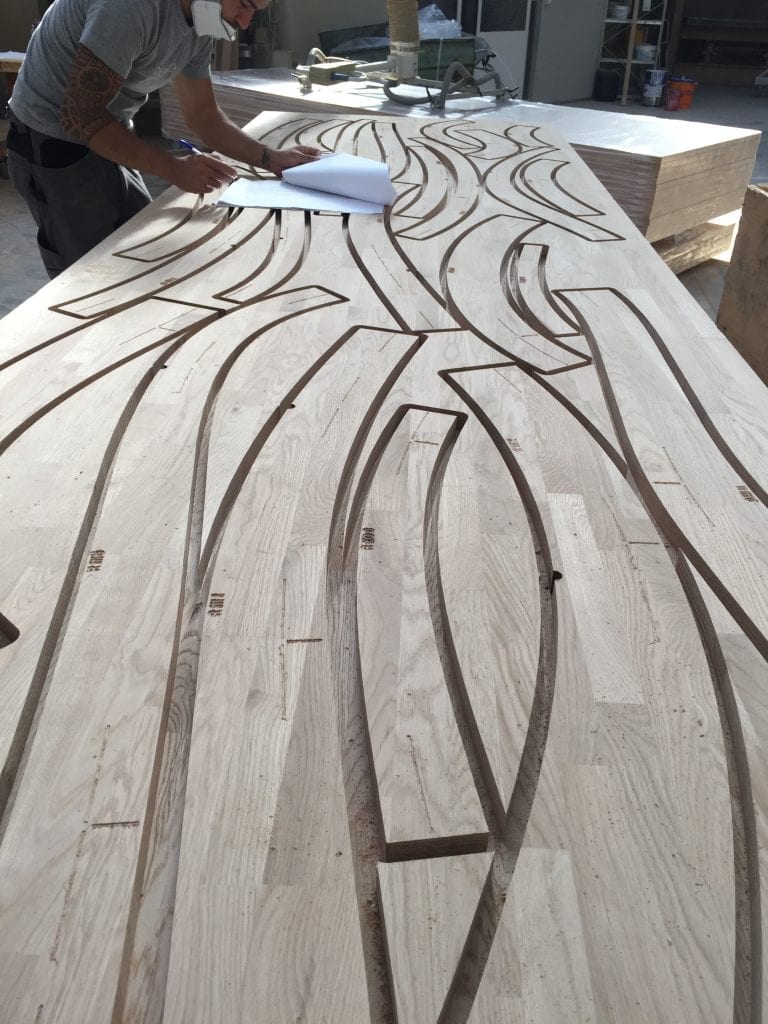 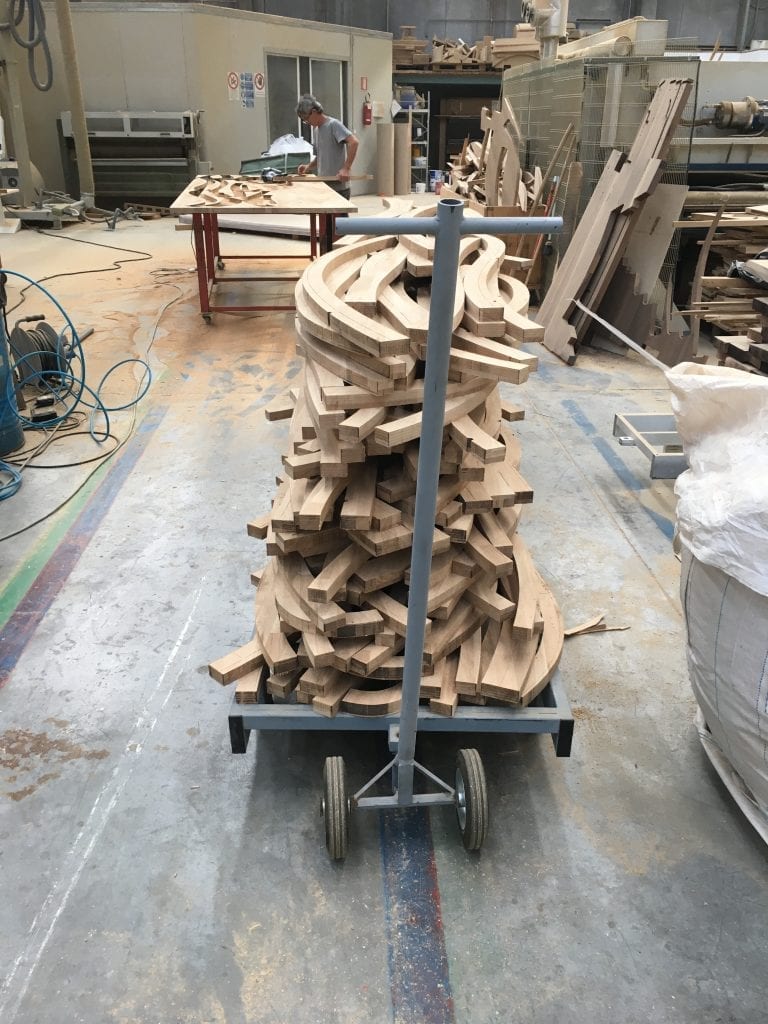 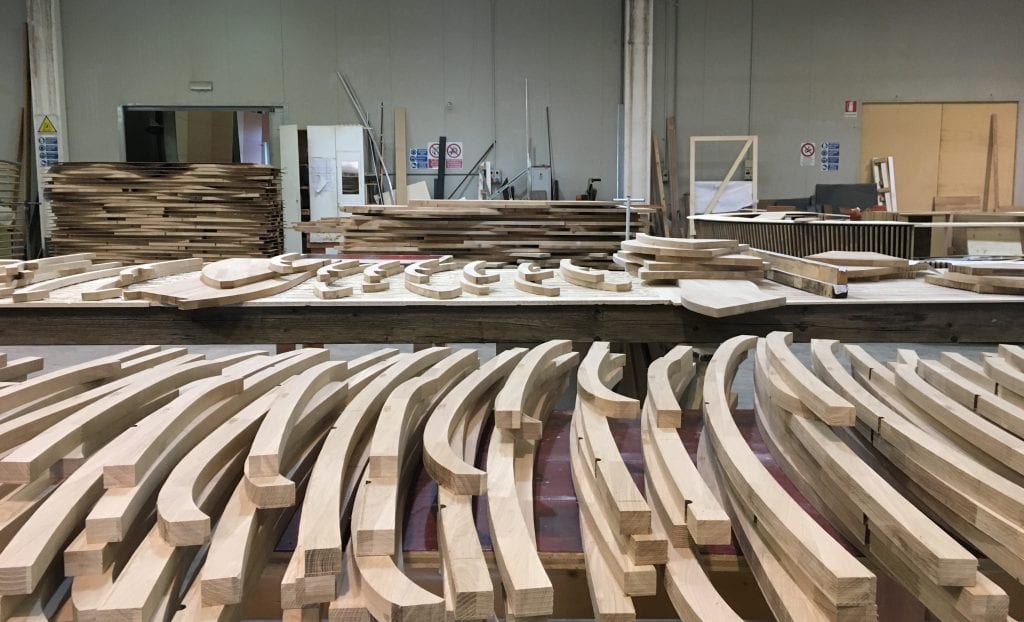 A total of close to 35,000 pieces of woodwork puzzles put to use

“We had 15,000 pieces for the children’s gifts shops and 20,000 pieces for the main gift shop. We had each piece named, for the name of the area, the line it was in and the column it was kept in. We made a software, especially for this work. We had a 3D model from Koichi Takada but we had to make our own to work out the intricacies,” she says. 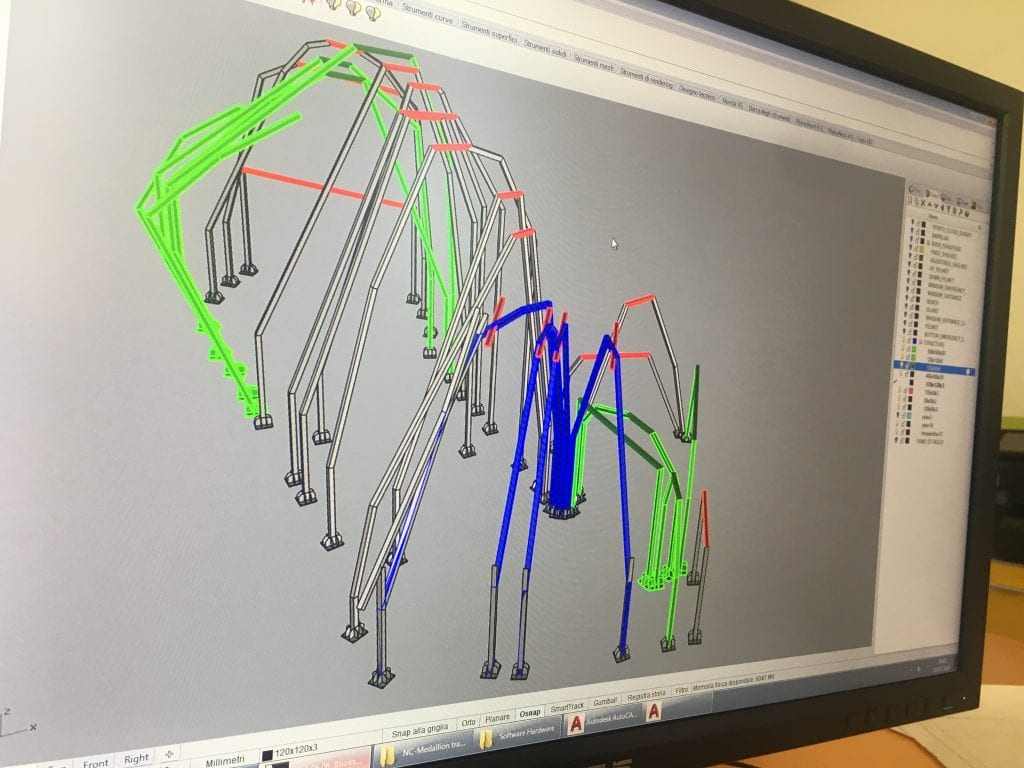 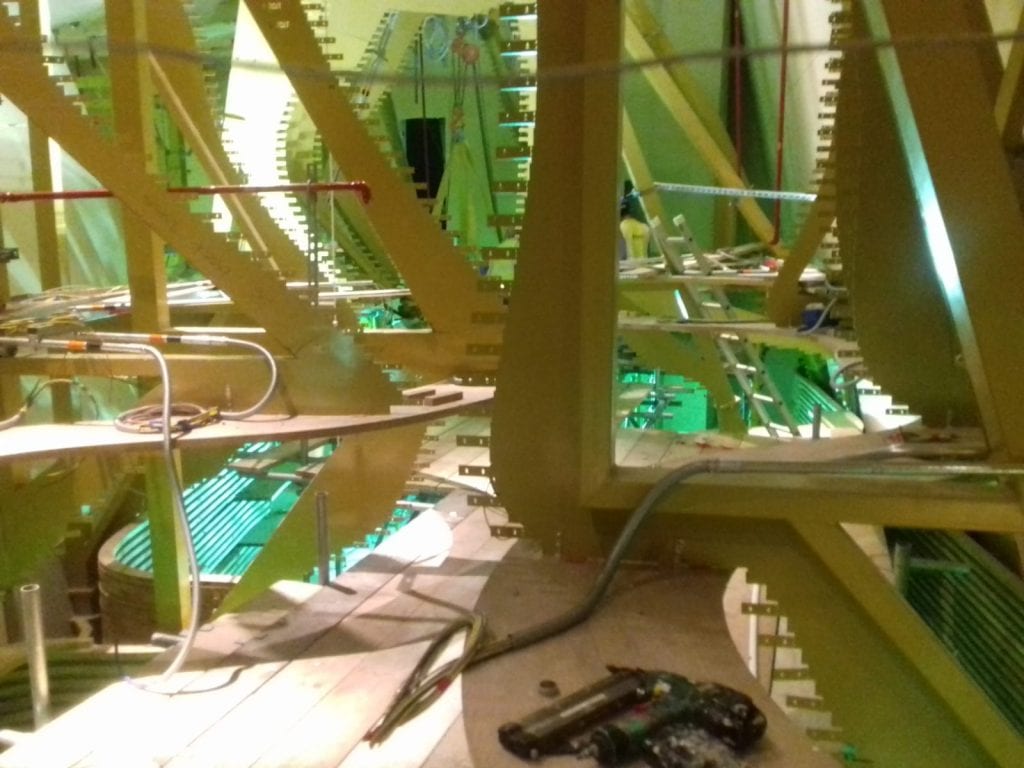 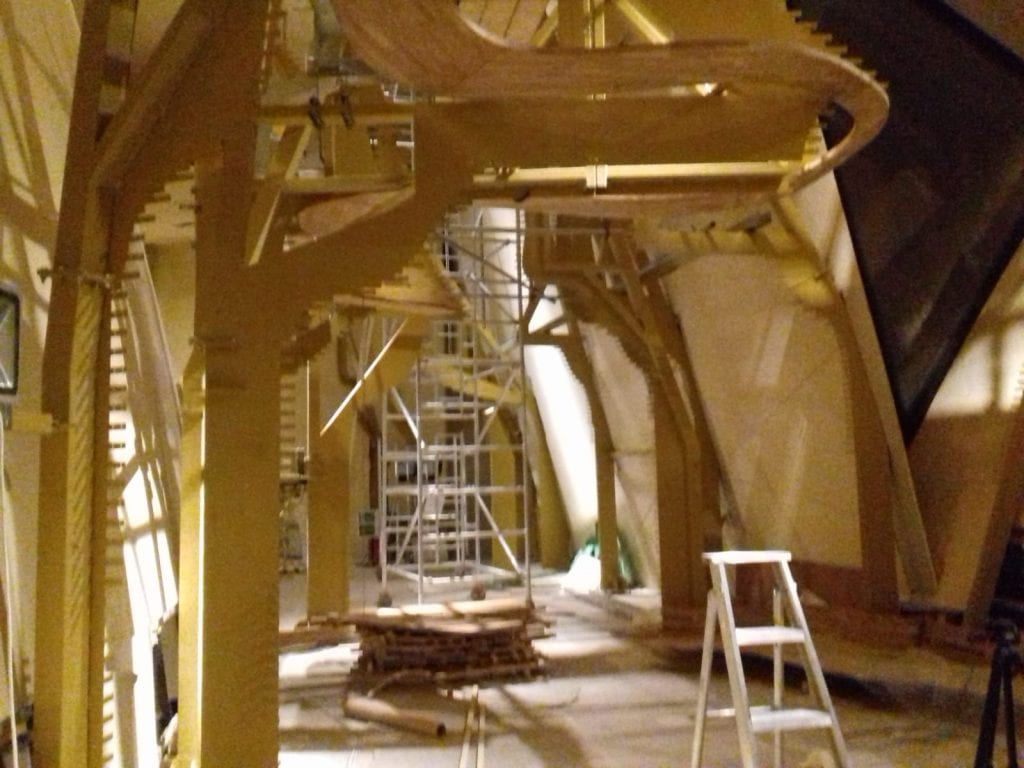 The Steel cladding being put in place

“Then came the metal substructure between the base building and the project surface which had to be inserted to match them all without changing the design. Devoto’s engineering department was supported by Koichi Takada Architects and the Museum structural engineers that were essential during this process,” explains Valentina, “A structural metal pillar onto which a metal sheet is fixed was fitted. This sheet already had a stepped configuration which gave the right shape to the modelling of the wooden cladding.” 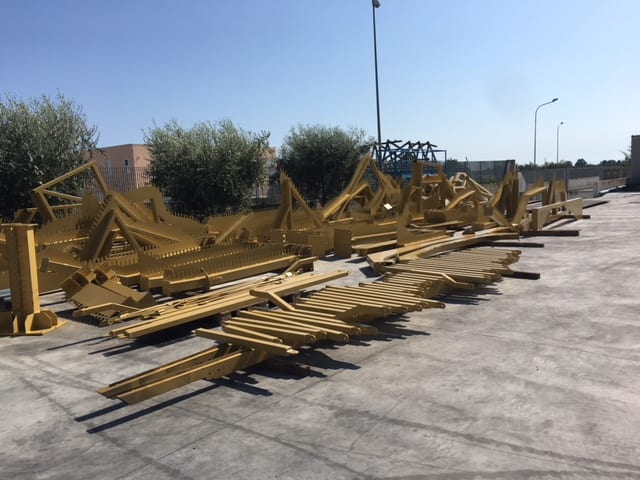 The movable ends help the installers position the wooden slats in the right way, leaving the necessary tolerance and freedom of positioning to reproduce Koichi’s design at best.

As for the treatment and finish of the wood slat, Koichi chose a product by Rubio Monocoat. It is an oil that oil gives a natural look to the wood, without altering the colour while providing strong protection.

Though Devoto has completed many such complicated designs, like the Zaha Hadid table for the Maxxi Museum of Rome, this cave work was a complete revelation, in intricacy and workmanship.

“It was a tough environment and a design that was very complicated, but the men and women from the Devoto Design put in their best and solved each issue as they surfaced since this was like a test for them too. A prestigious project, of national pride, with a master architects’ name behind it and in a country where you had to deliver your best. The team was dedicated to taking the challenge full on, and finish it stalwartly within the stipulated time. It is an Italian way of doing any work,” says Laura. 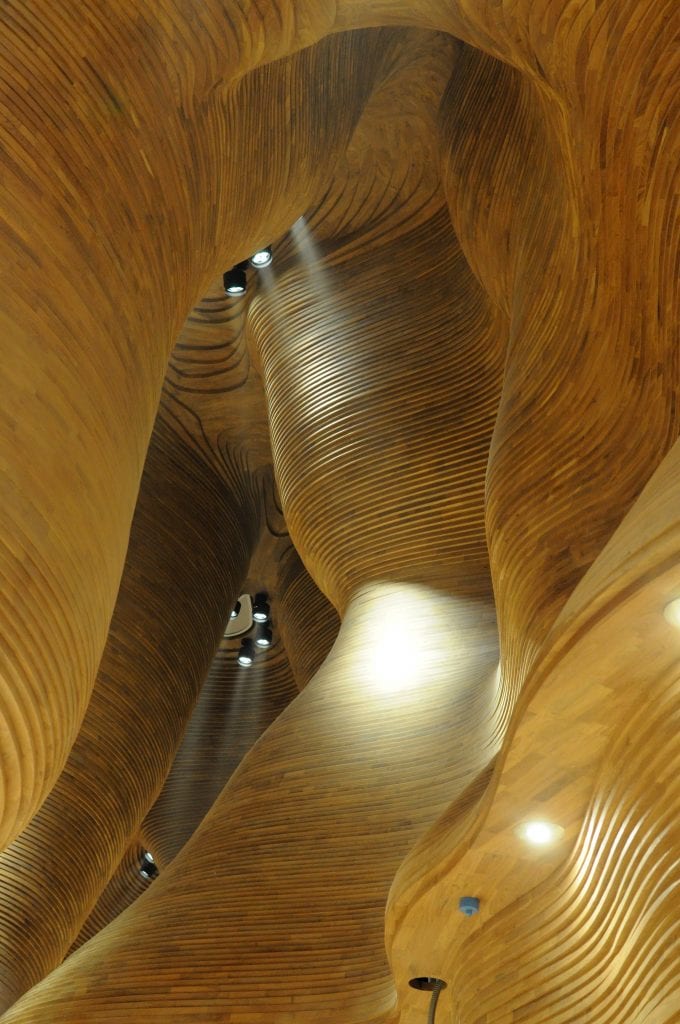 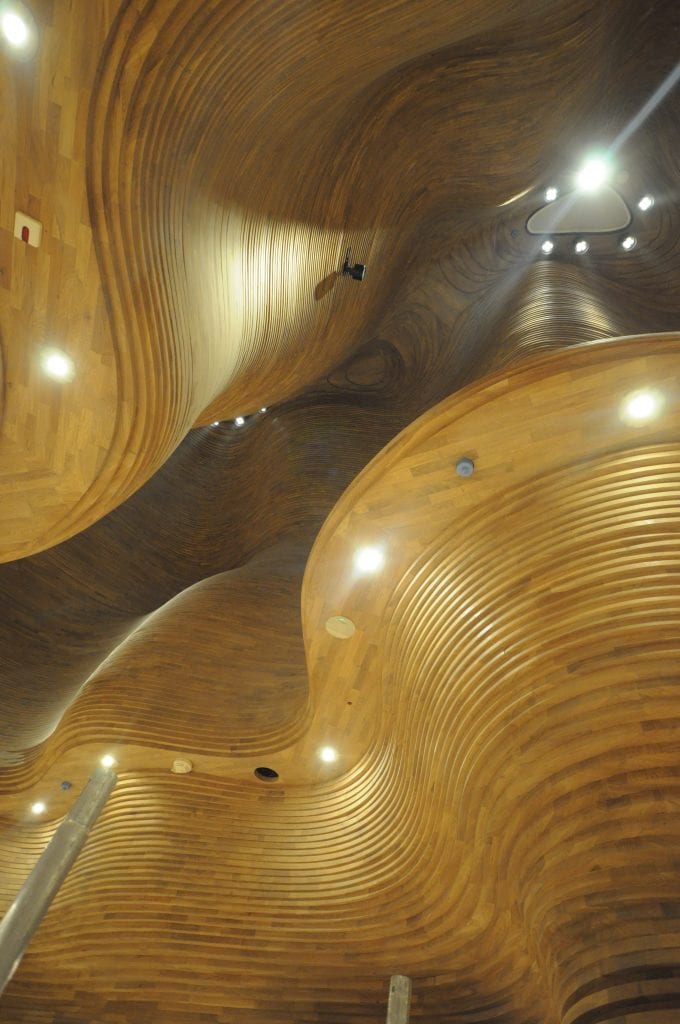