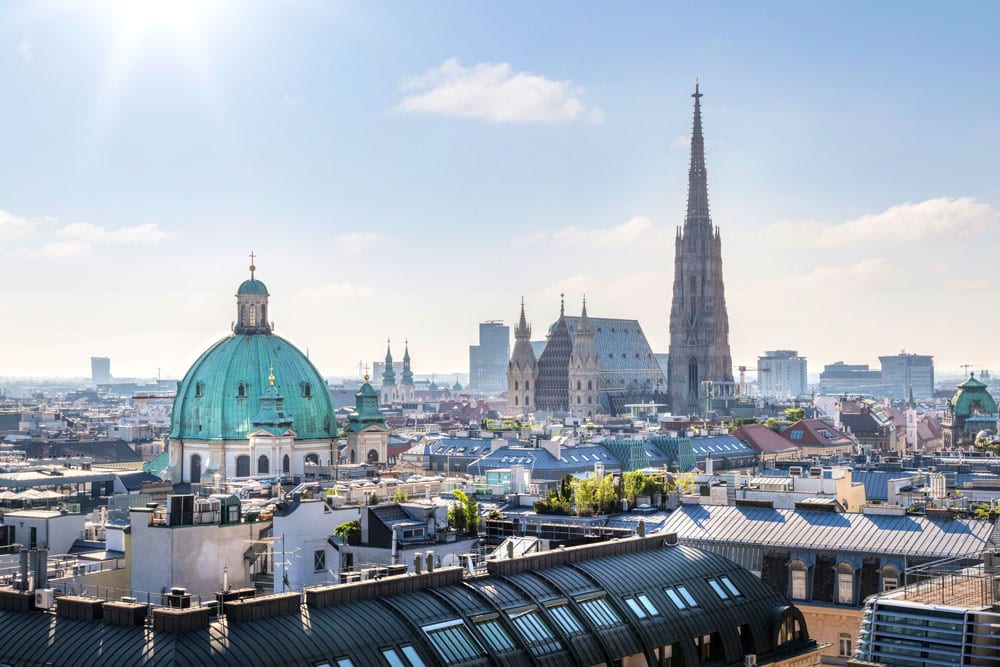 Vienna, The City of Perfection

SCALE takes you through the architectural landmarks of this beautiful utopian city in this two-part series. By Sindhu Nair 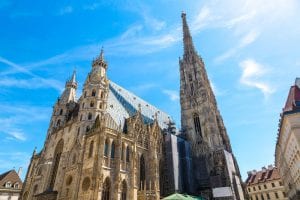 You know it the moment you enter the city; this is a place meant for purists. This city, perfectly networked through its underground rail and tram systems spiced with modern works of arts at major stations, laden with sights of Baroque-styled architecture and ornamented buildings, serves history through sights that seem utopian in its grandeur. A history that takes us through the celebratory period of the city as the capital of the Holy Roman Empire and the Austro-Hungarian Empire and the detrimental period of invasion; both by marauding armies and medieval plagues.

But what stands out for me in this city of finesse, of Strauss Waltz and Choir music, is how modern architecture melds with the city’s strong medieval architectural fabric, intertwining and celebrating each other as the need be.

This particular character can be seen through the 1990s Haas Haus building designed by Hans Hollein, which reflects on its glass façade, the St. Stephan’s Cathedral which is right across it. Hollein became the first Austrian to win the Pritzker in 1985.

Vienna is a city of survival, a city where life begins and ends in the theatre, as the Viennese are known to express themselves and their situations, on stage. Architecture, like theatre, seems to be one such mode of self-expression.

Vienna’s contribution to modern architecture is immense. From Otto Wagner, who had declared that something impractical cannot be beautiful, to the international-architects-designed-campus-facility that showcase the diversity of the institution, Vienna has a stronghold on architecture.

SCALE takes you through its list of the best architecture spots of the city; not just for the modernism on display but for the thought behind its creation, which makes for the success of the structure. 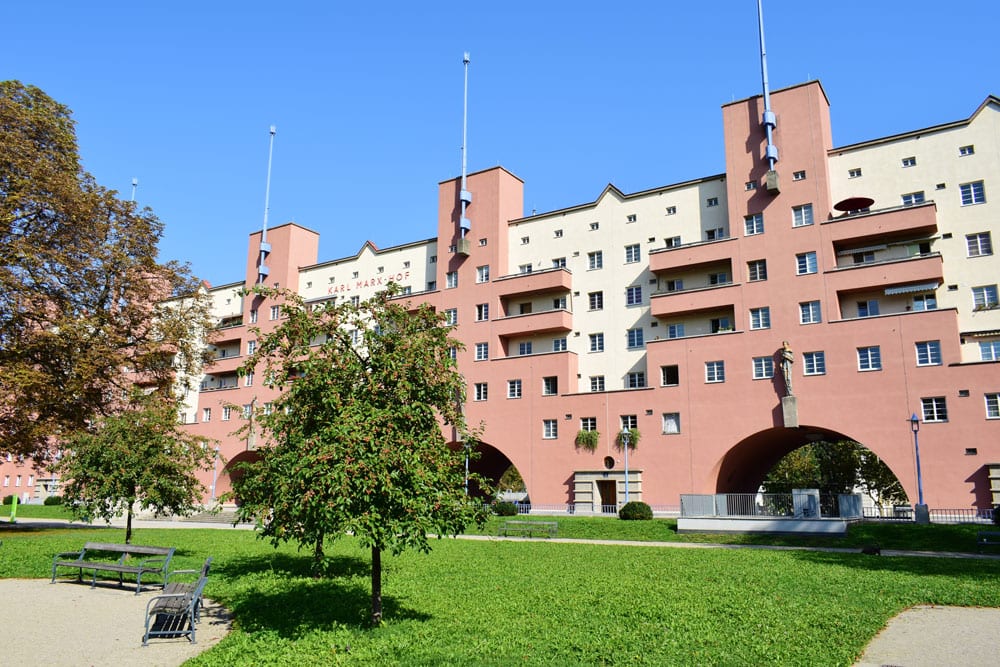 I had to be reminded twice as I set my foot into this complex that this was a low-cost housing meant for the less privileged and that the structure was built in the 1920s. This was a building that could be placed in context to any age, its architecture seemed timeless. It was also well-maintained and even after it had survived many wars, it was restored back to its earlier glory. 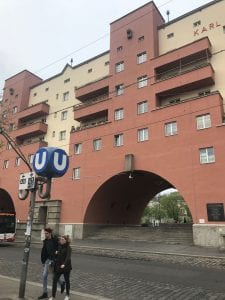 This was a building that completely changed the way people in Vienna lived and hence can be seen as landmark architecture for its social as well as design significance.

This building was built after the war as the initial post-war situation was catastrophic. Viennese living conditions, already poor by international standards prior to World War One, worsened dramatically during the war. By war’s end, Vienna was in a state of massive crisis. Housing was the most pressing challenge for the new municipal government. At the time, more than 250 000 workers lived in old jam-packed apartment buildings with no running water.

The situation had reached a critical point and the election of the Social Democrats in 1919 marked the beginning of a new era. The so-called Rotes Wien, or Red Vienna, administration launched an intensive programme of social reform in the 1920s and early 1930s, including the extensive re-housing of the population in almost 400 new municipal apartment complexes named Gemeindebauten.

Built between 1927 and 1930 by city planner Karl Ehn, a pupil of the renowned architect Otto Wagner, the colossal building with its 1,382 apartments was designed to welcome thousands of Viennese. The socialist ideology was most evident by this architectural flagship. Instead of building smaller-scale settlements on the outskirts of the city, the municipal authorities exhibited a preference for multi-storied apartment blocks in the heart of the city.

Situated at the end of the U4 metro line in Heiligenstadt, a neighbourhood of Döbling, the imposing building is over one kilometre long and contains laundries, kindergartens, pools, stores, a clinic, a pharmacy, medical services, interior departments to furnish the apartments and a post office. There is a huge courtyard behind the tenement and a well-landscaped central courtyard. 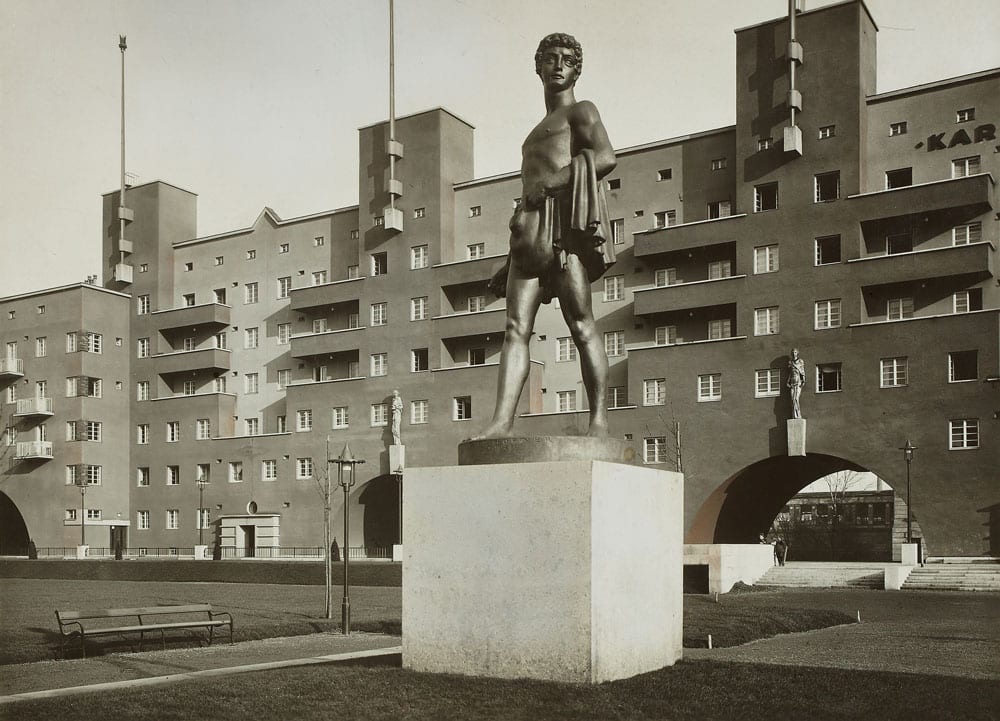 On the basis of a revolutionary fiscal policy (a luxury tax), the city founded numerous social programmes and health initiatives, created countless leisure, educational, and cultural facilities, and built more than 60,000 apartments by 1934. This policy, interestingly, runs even now in Vienna, with a quarter of all apartments constructed now is owned by the City of Vienna and is given on very low rent to the needy and to those who cannot afford the high rents. The housing scheme has been so successful that there are very less such needy people and it has also brought in social cohesion in apartments, bridging the gap between rich and poor. 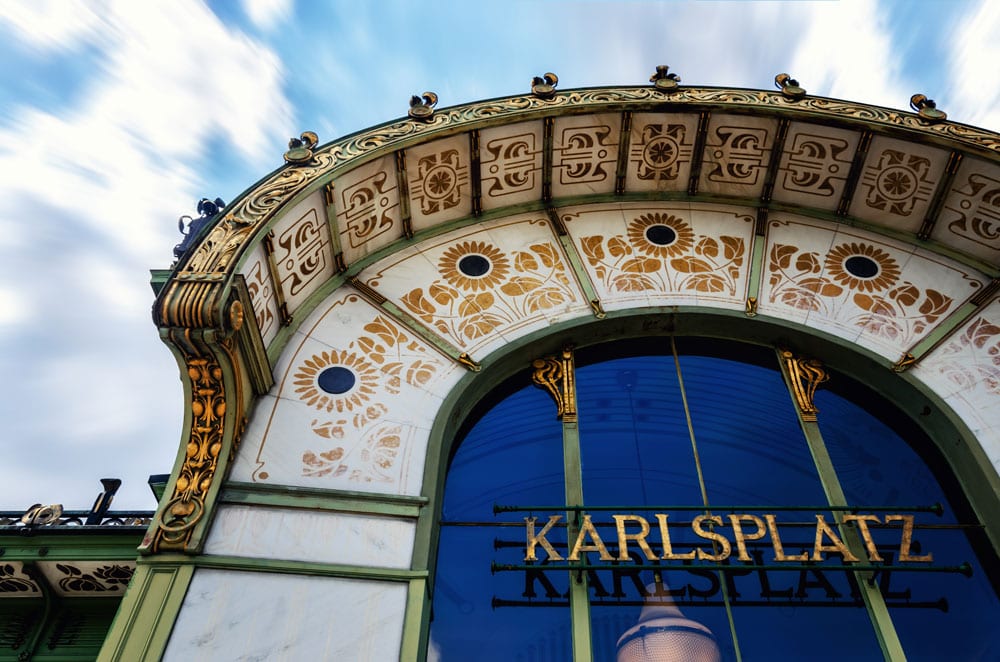 A visit to Vienna is not complete without exploring the buildings by the modernist architect, Otto Wagner, whose buildings stand the testimony of time.

Otto Wagner became famous in the later parts of the 19th century in a period when Vienna was going through a period of revival architecture which was bringing back the fame and glory of its past. Otto Wagner began speaking openly against this movement. He claimed that these highly eclectic styles were focused on the form rather than the function of the buildings. He compiled his ideas into a book called Modern Architecture, published in 1896. He proposed new ideas based on the emerging materials and techniques made possible by new technology at the end of the century. 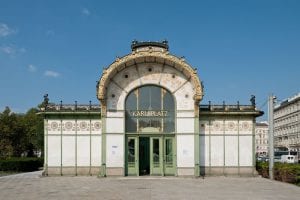 As a modernist architect, Wagner believed strongly in stressing the function of architecture as being more important than form or style. This is evident in his designs for the city railway of Vienna. A masterpiece of practical and functional design based on the most advanced technology of the time; Wagner’s plan cemented the use of modernist ideas in urban planning.

His railway stations along this route also helped establish the stylistic aesthetic of early modernist architecture. Wagner’s stations are largely completed in the style of Art Nouveau, defined by curvilinear and softly angular forms, organic motifs, and geometric designs. 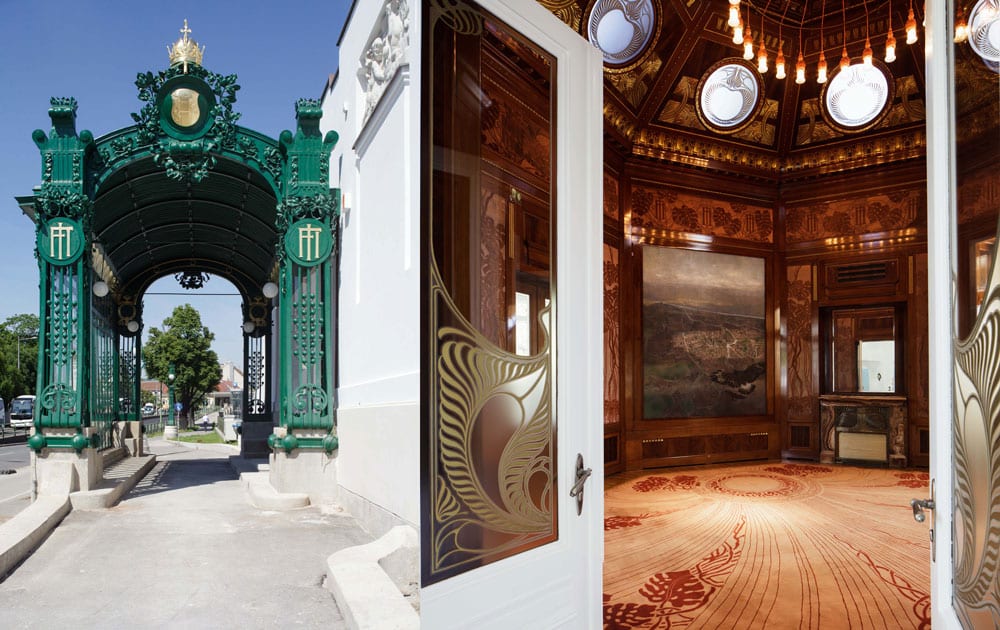 The flooring used and the glass roofs framed by steel bringing in light in areas that are largely dim and grimy makes his designs within the railway stations, instantly recognisable and often are misinterpret as contemporary architecture as they have stood the test of time. 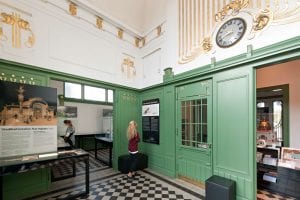 The Art Nouveau pavilion was erected in 1898 in the course of Stadtbahn construction. Wagner planned two portal buildings of identical design. Today, the Wien Museum uses the west pavilion, where the trains once left for Hütteldorf.

The many decorative details make the station into a prime example of Viennese art nouveau. Metal and wood were painted apple-green, the signal colour of the Stadtbahn. Gold, and finest white marble were added on the exterior. 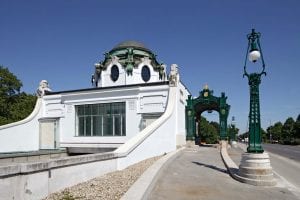 The planning for the underground rail junction of Karlsplatz in the late sixties threatened the pavilion with demolition. Protests followed; the station building was dismantled and re-erected in 1977, but elevated 1.5 m above its old level on the square. Now, at last, the west pavilion is paying Otto Wagner the homage due to him – with the new Otto Wagner Documentation exhibition. Some of the images here are from the Hofpavillon (court pavillon) near Schönbrunn, a jewel of its own kind. This building is a reverence of Otto Wagner to the Emperor (Francis Josef I.), but it is not quite so typical for the modernist tendencies in his work.

(This building can be seen at the permanent exhibition documenting the life and work of the great Austrian architect at the Otto Wagner Pavilion on 1040 Vienna Karlsplatz.)